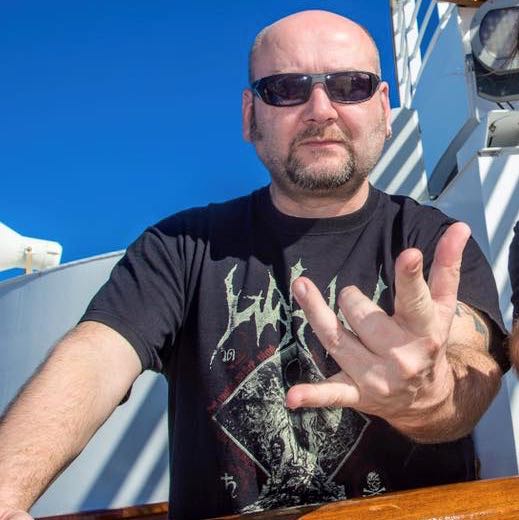 I was born in the summer of 69 in the south of Holland, the City of Geleen to be precise, home ground to the famous Pinkpop Festival. I am a die-hard music fanatic and a free-lancer for several Dutch printed magazines since the nineties. Since 2000 I have been writing for Aardschok Magazine, which without doubt is the ultimate printed ‘heavy’ magazine to write for in the Lowlands. Proud to be part of that team still! Being able to promote the music we all love so dearly is not something I take for granted. Lending Headbangers Lifestyle my helping hand occasionally only seems a natural thing to do. My musical influences and preferences are wide. My first purchase ever was the  ‘Wunderbar’ single by British semi-punkers Tenpole Tudor but these days I hardly connect to happy singalong anymore. On the contrary; melancholy and dark sinister settings are my favourite musical spheres. Bands like The Kinks and KISS paved the way for me as a 10 year old. In 1983 at age 14, I saw Maiden, Ozzy, Scorpions, Priest, Leppard and more at the notorious Rockpop festival; a line up that was never topped. Monsters Of Rock in 1984 came close though with AC/DC, Van Halen, Gary Moore, Accept, Mötley Crüe and Dio. Hardrock and metal ruled my life until Zakk Wylde put me on the path of southern rock giants Lynyrd Skynyrd and The Allman Brothers Band, which to date belong to my all-time favourites. Southern rock then led to the next thing; blues and American roots music. It is often said that taste buttons develop by the years. I could not agree more. My love for hardrock and metal will never die.  On the contrary, since my taste for extreme metal only seems to grow but American roots music is affecting me more and more as well. I feel blessed with these extremes. When asked for my favourites in rock/metal, the answer too could differ day by day. It all depends on the mood I am in. But Alice In Chains, Allman Brothers, Deep Purple, Gov’t Mule, King’s X, Nevermore and Watain will probably always be mentioned.