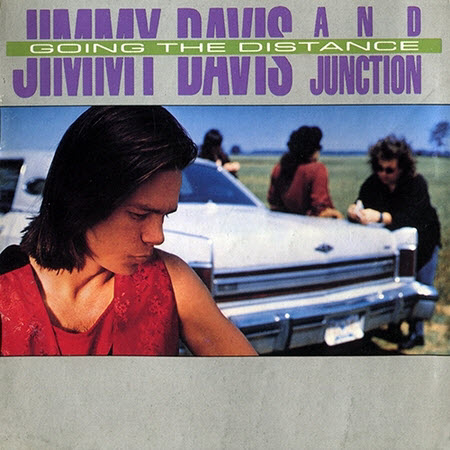 Much like Don Barnes’ CD, this album has a similar story to tell. Being shelved for decades, collecting dust, a finished product of the melodic heydays of rock was discarded by the record company, not eager to recoup their invested cash. With Andrew McNeice’s leads into both camps, musicians as well as record companies, we finally have a chance to rediscover those days long gone and fire up the music we missed out on for such a long time.
Jimmy Davis & Junction’s `Kick The Wall’ is an album that still finds it’s way into my player occasionally. The melodic tunes are injected with not often experienced soul and energy with a spotlight on Mr. Davis’ poignant and warm vocals.
`Going The Distance’ instantly connects as the songs pick up where `Kick…’ left off, without falling into repetitive motion. No, `Going The Distance’ crystalizes more into the melodic direction without disregarding the soulful arrangements. It simply paws a little more melodic and still has the urge of the debut, and nests as easily. The album is packed with hymns and not a single track falls short in delivery. Mega melodic hymns, sticky and sweet, but always reveal the soul and heartfelt passion needed to make it stand out. `Going The Distance’ does sound slightly more polished but also shoots higher with impressive melodies in the right places, and guitars and keyboards complimenting each other to perfection. Davis’ vocals still sound breathy and soulful, tingeing southern rock’s finest.

There’s a lot to enjoy on this excellent album with highlights by the dozen (+1). Absolutely magnificent is the opening, bass driven southern stomper ,,Out Of Control’’ with Davis digging in deep, still very up to date addressing social issues as financial diversity and world hunger. 30 years old it depicts and addresses them spot on as well as the ecological pain of our earth warming up and nature being exploited by mankind. All delivered with a demanding urge and thriving guitars, melodic and oozing passion. It opens towards lighter lyrical content, more enjoyable suiting the melodies and feel of the album. ,,Enough is Enough’’ is simply sublime, but to me it’s the immaculate melodic hooks of the earworm ,,Better Believe It’’ that truly have me cheering. One of the most memorable tracks I’ve ever heard!
It stands out rated 12 out of 10, with all other tracks scoring 9-10 points indeed. The album progresses in perfection with the melodic driven power burst ,,Against The Ropes” and the lingering southern ,,When The Darkness Falls”, with its honkytonk piano and guitars sliding while the Hammond wells into a roar. It’s all perfectly matching the mood, same goes for the remarkable ,,All The Rage”, ,,Can’t Run Away”, the bass pumped ,,Right As Rain” and the melodic splendour of ,,Never Know”. The harmonies and organic feel of the music is just sublime. ,,My Way Or The Highway” closes the album just perfectly and making it go our with a bang. Unbelievable an album like this got shelved by the record company for this long. Jimmy Davis & Junction’s `Kick The Wall’ sprouted a hit single, which likely would have orbited this second release back in the days. `Going The Distance’ has stood the test of time and, in comparison to Don Barnes’ `Ride The Storm’ the album still stands tall without feeling all too dated. It just oozes too much passion and soul. A must have for fans of melodic rock, Southern rock, classic rock, AOR…

Summarizing; a must have for fans of rock!