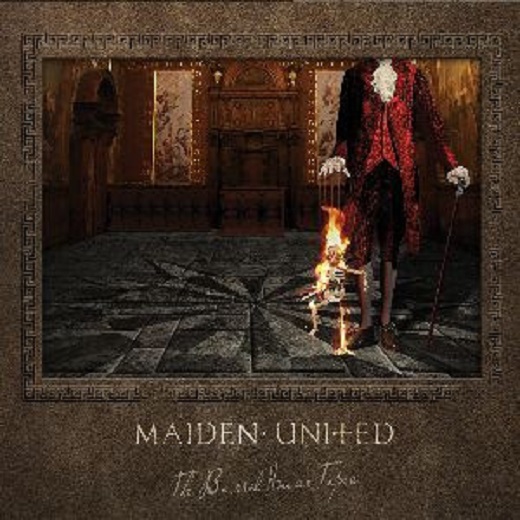 Immediately striking is the intense gritty saloon sound the band implemented for this run of classics. `The Barrel House Tapes’ is the word play to Iron Maiden’s infamous `Soundhouse Tapes’ and impact of its title is eminent. ,,The Number Of The Beast” warps us into the turbulent days of the Wild West with a stripped down acoustic setting oozing comfort and hints of Ennio Morricone’s hailed soundtracks. It immediately whelms a specific Spaghetti Western soundtrack grit with distinct notes reminiscent to the impressive, `Lust Guns & Dust’ album from Dutch Lillian Hak. ,,Back In The Village” offers a more classic acoustic atmosphere with White belting comfort and Baumann adding panache while the honky tonk piano adds impacting discomfort uplifting the outcome of the track. Maiden United switches perfectly between intimate settings and whelming atmosphere to add turmoil and spice to the metal hymns. ,,Alexander The Great” taps the emotional vein, stripped down to the max with almost narrative powerful storytelling, a line also followed on the epic ,,Powerslave”. Trumpets infuse the latter with a certain degree of disgruntled emotions adding to the tenor of the vocals. Absolute highlight is the striking ,,Phantom Of The Opera” with mesmerizing section and intense upbeat sections. ,,Motsegur” packs a distinct timid approach with intense drums and percussion variations injecting the track with a medieval overhaul. Powerful vocal presence make ,,Sanctuary” an impressive rendition with it’s Spanish/Mexican theme enhanced by the dominant melody line from the trumpet which truly puts a mark on the song. It’s adding lustre and immediately nests with comfort.
When the pace goes up the western elements also increasingly add posture like on ,,Stranger In A Strange Land”, which is certainly one of the better tunes. Closing the album is a graceful performance of ,,Caught Somewhere In Time” with great vocal interaction and serene setting, reminiscent to Ayreon’s least pompous songs. The track is the exclamation point of the album.

`The Barrel House Tapes’ is another pearl to the distinguished crown of Maiden United’s rich oeuvre, displaying a unique and intense approach. The band manages to implement Iron Maiden’s classics with uncommon eccentric instrumentation and inject historic diversity with typical elements from specific ages and regions adding posture. The way it is all executed breathes honesty and respect. Respect is also falling prey to them for this, yet another, great collection of tracks.