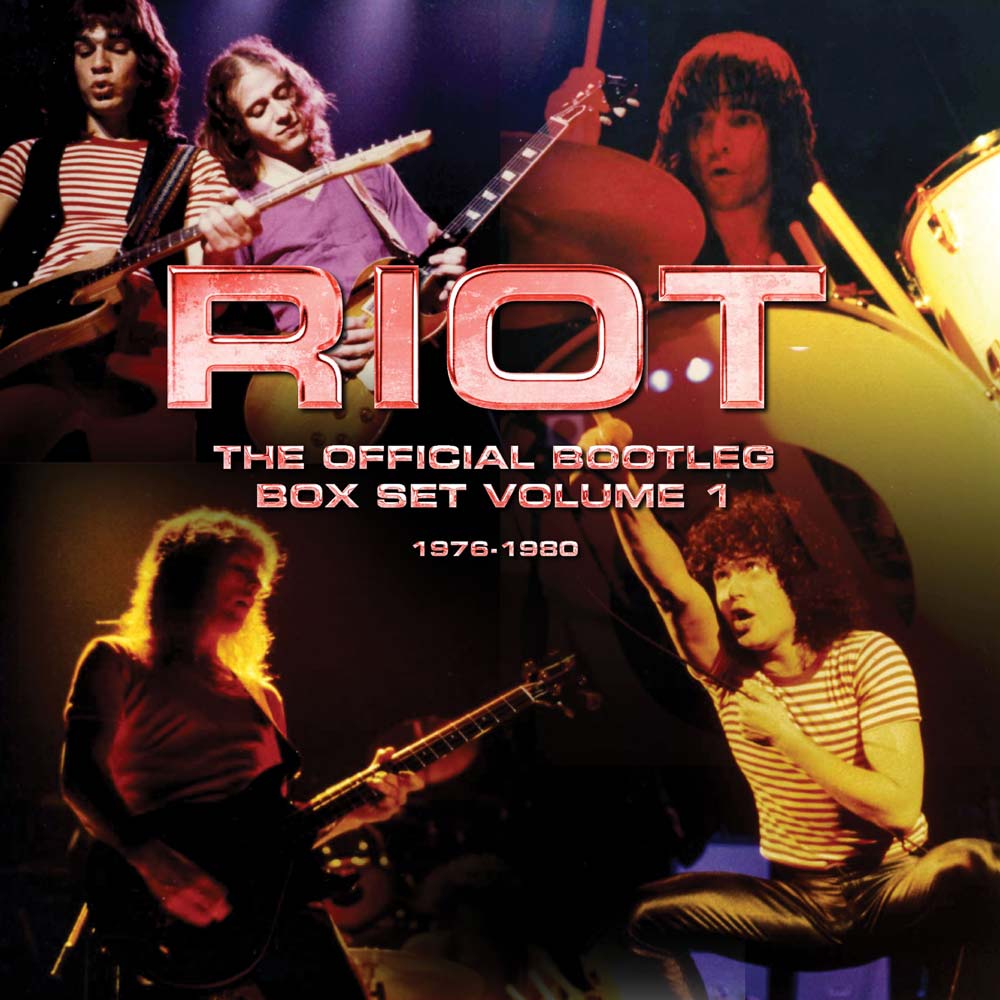 November 1, 2017 by Michel van de Moosdijk - More about our team

A six CD box set from New York band Riot covering the period 1976-1980! Every metal and rock fan should have a copy of ‘Rock City’, ‘Narita’ and ‘Fire Down Under’, the first three quite legendary albums of this group around guitarist Mark Reale and singer Guy Speranza (both deceased). These two formed the heart of the band in those first years and when Speranza left after that ‘Fire Down Under’ album Reale kept the band going for many years. Even now, with Mark Reale deceased the band still is around. These recordings are all live and be aware that the sound quality is not very good at all. No surprise of course as some are recordings from small gigs the band did a time that the first album was not even recorded yet. You hear on the first two discs two shows the band did in 1976 as they played a mix between covers (like Sweet’s ,,Fox On The Run’’ and the Montrose tracks ,,I Got The Fire’’ and ,,Rock Candy’’ plus Alice Cooper’s ,,Department Of Youth’’) plus some original material still finding their feet on stage and sounding all over the place. Obviously recording a gig in those days was a crime for any band so do not expect that much. Also the third disc recorded in Ohio in 1979 is not great. Things get better on the other discs containing all gigs from 1980 in the USA and the first UK tour the band did with Sammy Hagar (a show in Bristol). The last disc has recordings from their August 1980 show at the Castle Donington Monsters Of Rock festival with Touch, Judas Priest, April Wine, Saxon, Scorpions and headliner Rainbow. At least those recordings are reasonable but far from great either as the background vocals sometimes sound louder than the lead vocals. I suppose that this Box is only suitable for the real fanatic Riot fans from the early days, as this band was really good on stage as well. I saw them myself in 1981 in the town of Port Vale England playing the ‘Heavy Metal Holocaust’ festival with Triumph, Ozzy Osbourne, Vardis, Frank Marino and headliner Motörhead. In fact Riot had quite a following in Europe, a bigger one than in their native country. The liner notes for this release were written by Malcolm Dome, a veteran journalist. But this silly sausage constantly writes about the popularity of Riot in the UK and just forgets about the fact that the band had a lot of followers in the rest of Europe as well. Though in those days the major rock and metal festivals were held in the UK, but those times have changed. Anyway, as there were no official live recordings in the Guy Speranza era released, I suppose that this box gives you a taste of what it was like back then. A young talented band finding their way to a top they unfortunately never ever reached because when Speranza left things did not improve. Riot stayed at a certain level, still producing very good records but not breaking through on a world wide scale.