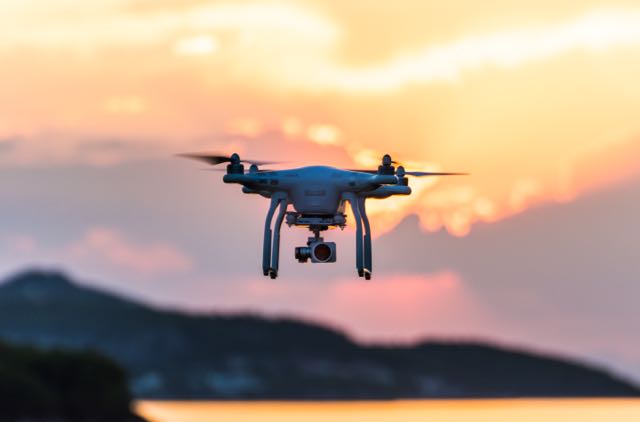 Drones.
Aren’t they just so much fun? That is of course if you know how to operate them. You can now spy on your neighbour from a great height and without his knowing or consent. Yes, go ahead and apply a camera to it and see what the world is up to. From that vantage point, you can literally get a bird’s eye view! I imagine that some people have far too much time on their hands and therefore amuse themselves with, well, whatever?? At the last 70.000 Tons of Metal Cruise, I was on the beach with my groove brother Steve, who was lapping up the sun, and then all of a sudden I heard a whirring sound and to my surprise there was a boffin with a drone. He obviously had mastered the controls as it did exactly what he told it to do. He then took this machine so high that I lost sight of it, only to discover that he had sent it over the cruise liner. Wow, it was in fact quite fascinating to watch, and then he brought it back to where he was sitting. Astounding, he then put it back in its box and casually walked away. He himself was very nonchalant about the whole affair, but I was intrigued for if I were at the controls it would more than likely have landed somewhere on the Russian border by now, only to have Putin’s cronies accuse the Yanks of spying, hence I would have started an international incident and possibly led the world into a conflict that could end up with the obliteration of human kind! Anyone out there reading this, please don’t let me anywhere near a drone!

Unfortunately they do have a sinister application too.
They are used by the military for all sorts of clandestine operations! You now don’t have to have boots on the ground so to speak as you can send in the drones to do the dirty work once done by soldiers and consequently the loss of life is now reduced to a minimum, just not on their side! They can deliver a payload with deadly accuracy and with cameras on board you can witness the devastation first hand. We now have those who are barely out of school who see this as nothing more than an elaborate computer game, and have become so detached that the reality of their actions is in fact withdrawn from their consciousness. If they were to see the truth of what they have done, well I guess you can never not see what you’ve seen. (They drive us to combat like computer games, button push and psychos at the controls, steer us on course for destruction for every stage captured through a spy hole.) Those are the lyrics from a song called ,,A World Full Of Eyes’’ by Scrap Iron Scientists and it’s very apt. Technology has taken us to a point where everything and anything can be weaponized! You name it, anything at all. Why are we so afraid that we drive fear into others to make ourselves feel less afraid?

Isn’t it a shame that we are full of wonderful dreams, but choose to visit such nightmares on one another?

Drones? Keep your eyes on the sky!