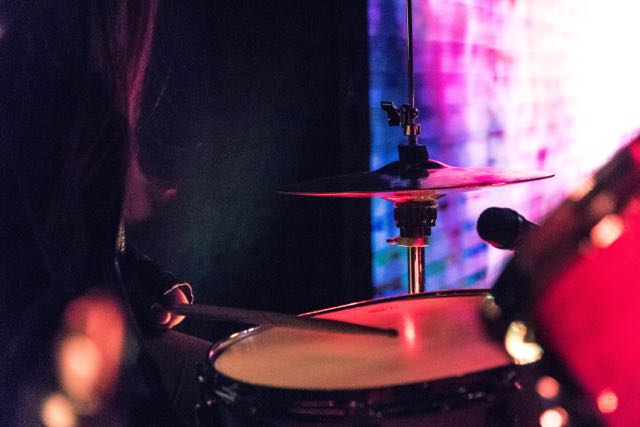 Hello my friends, or should I say friend whom I pay to read these columns? I am kidding of course!

Today I’m going to talk about my first drum kit. Do you remember yours? You should do as it’s where you began!

Would you believe that I still have it? Yes, it’s in the cupboard under the stairs! It was bought for me many years ago by my dear mother and served me very well indeed! I had told my mum, “I want to play drums“! That was after hearing Ian Paice’s drum solo on `Made In Japan’, the live album. The solo was mesmerising to say the least. It had everything, and from then I was hooked! “NO“! She said. “You should study to become a lawyer or doctor“. Now, can any of you imagine me being either one of the aforementioned? No, I didn’t think so! Anyway, after many months of hounding, she still said no. So one day we were walking past the very shop where the kit was, and we went in, in fact I dragged her in, just to show her what I wanted, and again she said no! She then told me to wait outside as she wanted to speak to the assistant, why, I couldn’t tell you? You know, I can’t remember the name of the shop. It was one of those general music stores that had mostly guitars and sheet music. Anyway, she then came out of the shop and we went home. I still hounded her, to which her answer was always, no! I was kicking up a right stink saying that my siblings always got what they wanted but I didn’t. Blah blah blah blah. After throwing my baby out with the bath water, not that I had children of course but you understand, she asked me to come into the dining room and showed me the deposit slip. She had bought or at least paid the deposit to which she had committed to paying off at so many pounds per month. I was dumbfounded and immediately kept very quiet indeed, to my shame, oh shame on me. The dear lady wanted to see my reaction, and she got it. Well, needless to say that I looked forward to the end of every month that she would give me the coffers to go and pay off for the said instrument. £115.00 it cost back then in 1975. Goodness me, was it that long ago?

It was a black plastic wrap Kent drum kit that consisted of a 22 X 14″ bass drum. A 12 X 8″ rack tom and a 14 X 14″ floor tom with a 14 X 5″ snare drum which wasn’t much to speak of! The stands were, well let me say this, they certainly wouldn’t last as long as the red house fire! Seeing as I only got one of each, meaning one cymbal, snare drum, hi hat, stool and bass drum pedal, all had to be replaced by Pearl and Slingerland stands respectively which lasted for many a good year. In fact I still have a few of those bits! But I can tell you now, my mum regretted buying that kit for I was on that thing day and night, honing my skills. I must have annoyed the neighbours something rotten, but got no complaints, only from my mum! I got so used to playing just four drums that the flirting I did with larger kits only made me revert back to a smaller kit, which is where I have always felt most comfortable.

After a couple of years of having this noise maker, and of course it being loved, the plastic wrap decided to fall off, only to reveal how badly it was actually made! Cheap stuff ain’t good and good stuff ain’t cheap. Buy cheap, buy twice! Well, out came the wood filler for when I peeled the plastic wrap off, most of the wood, or what I thought was wood, came off with it! I guess I did a good enough job, but then decided to write silly quotes on it. The very first gig I did with it, after replacing the snare drum off course with a Pearl Stuart Copeland model, was at a college in Middlesex with two bands called Freehand and Vendetta. The sound engineers were very amused at my silly quotations and were most definitely judging the book by its cover. Then we started to play and hence they took us very seriously indeed, for the monitor guy sat directly behind me for both performances and afterwards shook my hand and said “Mate, that was fantastic“! I humbly accepted his compliments and apology and continued to remove my kit and myself from the stage. I must say that I had a wonderful time that night. That kit went on to grace the stages of the Rock Garden supporting The Southern Death Cult, as they were called back then, and the Marquee, yes, the one on Wardour Street, yes, the same stage as The Stones, Hendrix and many others as it was an honour to be in such illustrious company. It went on to do countless shows, that was of course after covering up the silly quotes with a respectable, black plastic wrap until I then elevated myself to a Gretsch kit. Oh my goodness, I’ll tell you about that one day, so hence the Kent kit was consigned to the annals of the cupboard under the stairs, but not forgotten. I have some extremely fond memories of that kit for it saw me right for a number of years and although my dear mother wanted me to be something else, I was never going to be what she wanted, therefore she had to put up with me being what I wanted. Though she often said that I should get a proper job she didn’t hesitate to tell all her friends when she saw me on Top Of The Pops and other various TV shows. “Did you see Johanne on TV last night“? I guess that was when both my parents took me seriously as I was all of a sudden heading off to places in countries they had never heard of that they couldn’t spell!

I can’t thank both mum and dad enough for all the love and support they gave me in the end, for I had found something I could do for the rest of my life, which I suppose is what they both wanted for me. A little more money wouldn’t have gone amiss, but you can’t have it all your own way! My dad, being an engineer, would make me all sorts of gizmo’s to go onto my kit that no one else would have and thus became the envy of many a drummer. “Where did you get that“? They would ask. “Oh my dad made it for me“. “Can he make me one“? Hell no!

So again, thanks to both of you for all the bits, love and support over the years, and see you in the next life.