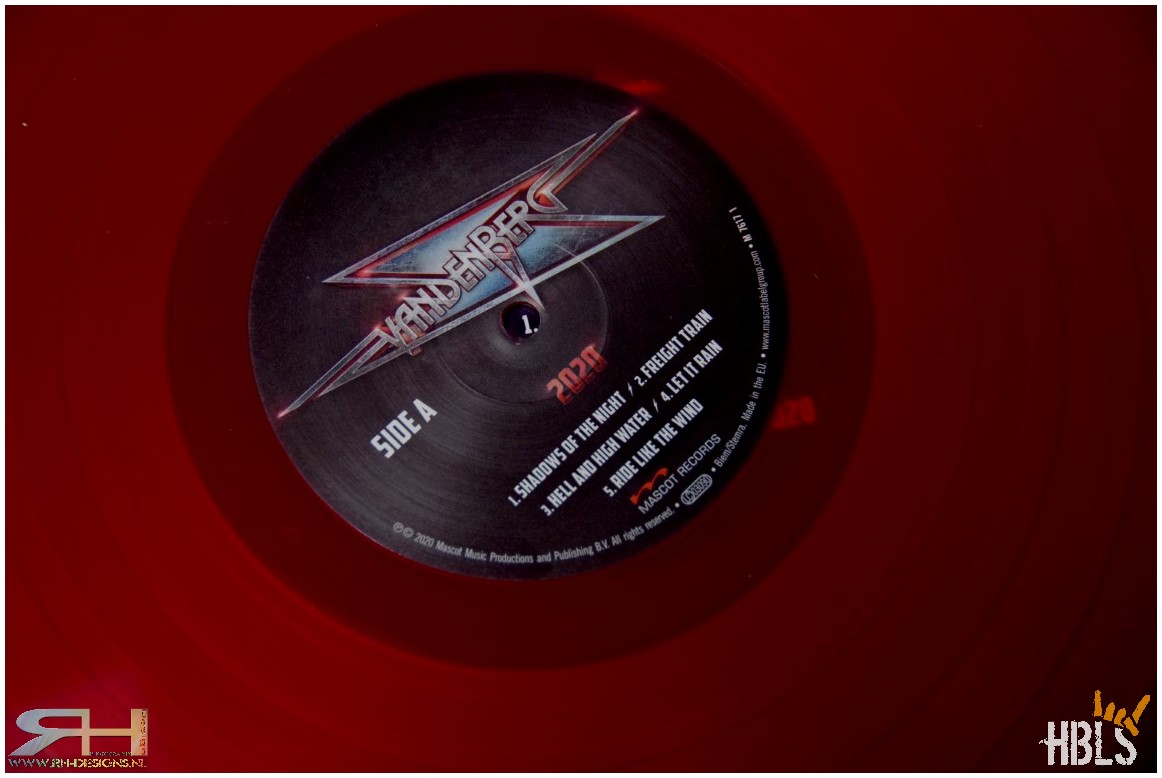 HeadBangers LifeStyle’s Raymond Helebrand is a vinyl aficionado. For every issue he randomly picks a few to talk about and shares his thoughts in The Vinyl Corner. It is not so much about the music on the albums, it’s about packaging and artwork. This week Episode 1 features Lionheart, Blackballed, Vandenberg and Nightwish.

Vinyl is and has been around, in various forms, for more than 100 years. After being nearly defeated by the CD and digital MP3 or WAV formats at the end of the 80s and 90s, the vinyl record is re-gaining its former glory. Although it has never been completely out of the picture, not many of the 90s album releases have made it on the vinyl format.
The good news for vinyl enthusiasts is that in the last years, the medium gets more attention from the record companies and besides releasing new music on digital formats, more and more releases come out in the vinyl format. And even a lot of music that was never released on vinyl is getting a re-release in this form.

The hard ’n’ heavy genre is no exception to this development and so we can enjoy lots of new music to be released on the beloved medium. And to be honest, I think vinyl enthusiasts can appreciate the fact that the record cover is much bigger than the small cover of a CD and the artwork that goes with the release can really shine. I mean, the impact of for example the artwork of Iron Maiden’s ‘The Number Of The Beast’ is much more impressive on vinyl than it is on the CD-release. It just makes a completely different impression.

There is the everlasting discussion, which format has the better sound? A vinyl record or a CD (or any other digital format). Personally I love the warm sound of a record, even with the noise, cracking and/or an additional scratch (mostly on the older records). But I also know that there are purists that want to enjoy the music without hearing any distraction. So I would say it is completely up to your own taste.

In this first episode I would like to pay attention to a few vinyl releases that have been around for a few months or yet have to be released in the upcoming months. 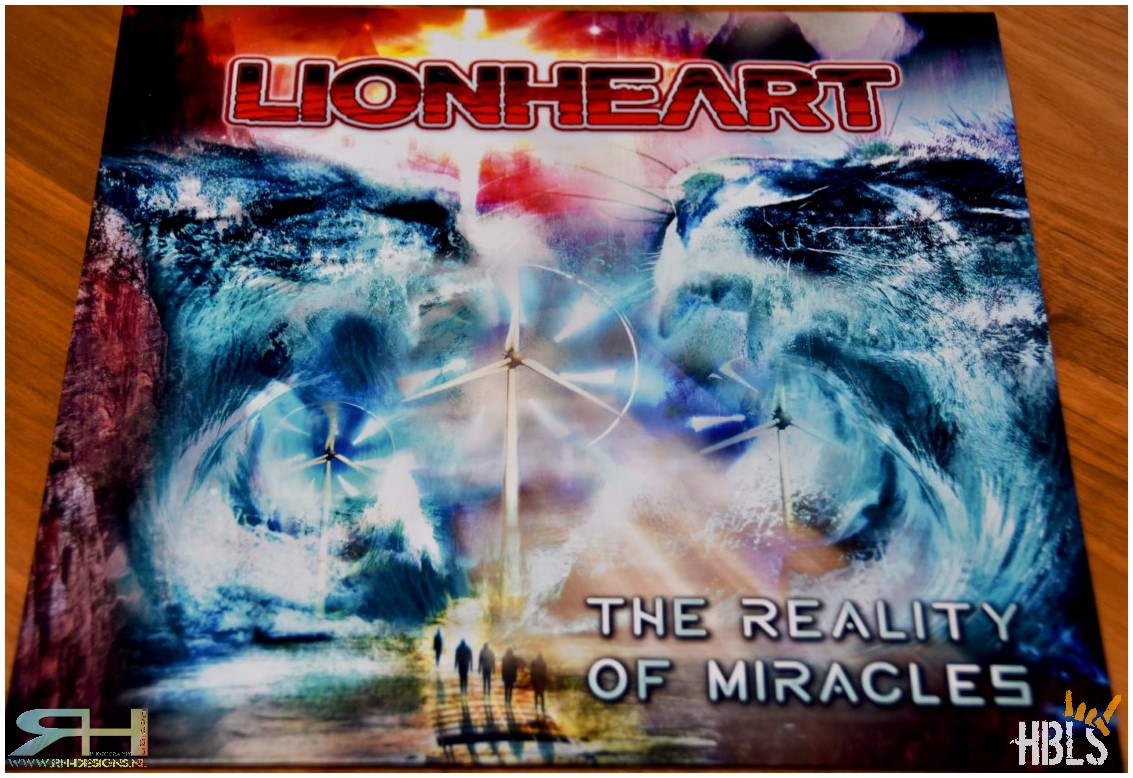 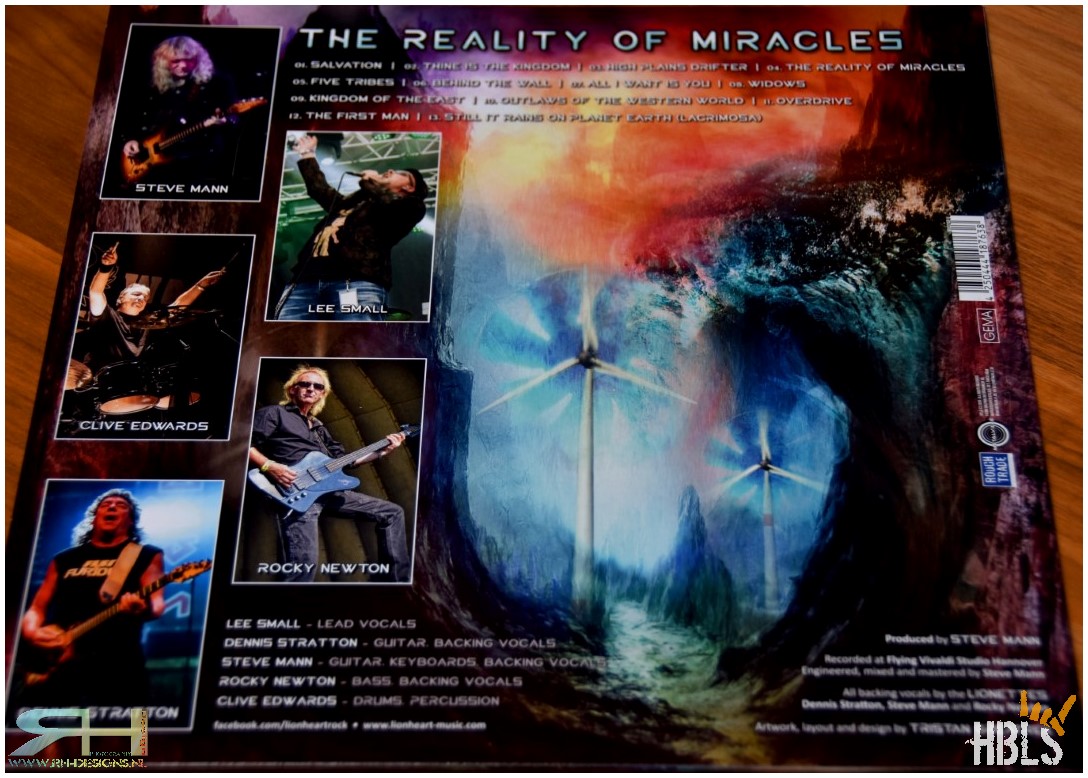 To start with the soon to be released [July 31th] LIONHEART ‘The Reality Of Miracles’ (Album review here).
For this record the artwork, layout and design has had a lot of attention from Tristan Greatrex. I think the artwork is designed with the vinyl release in mind. 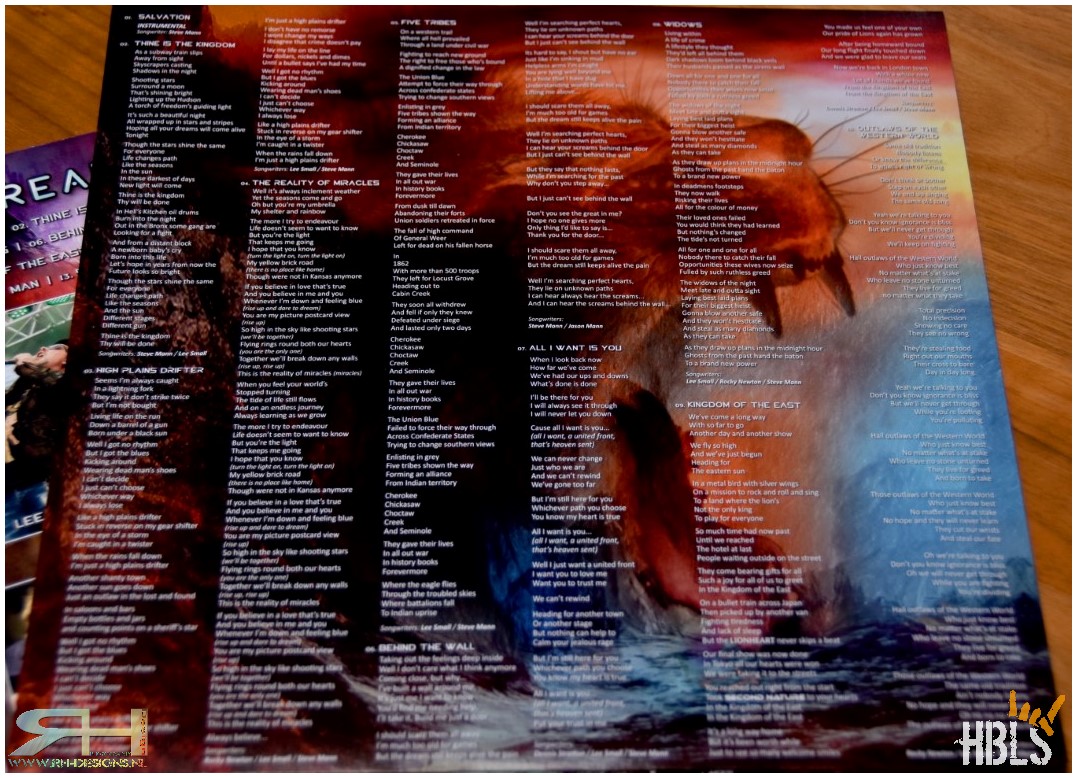 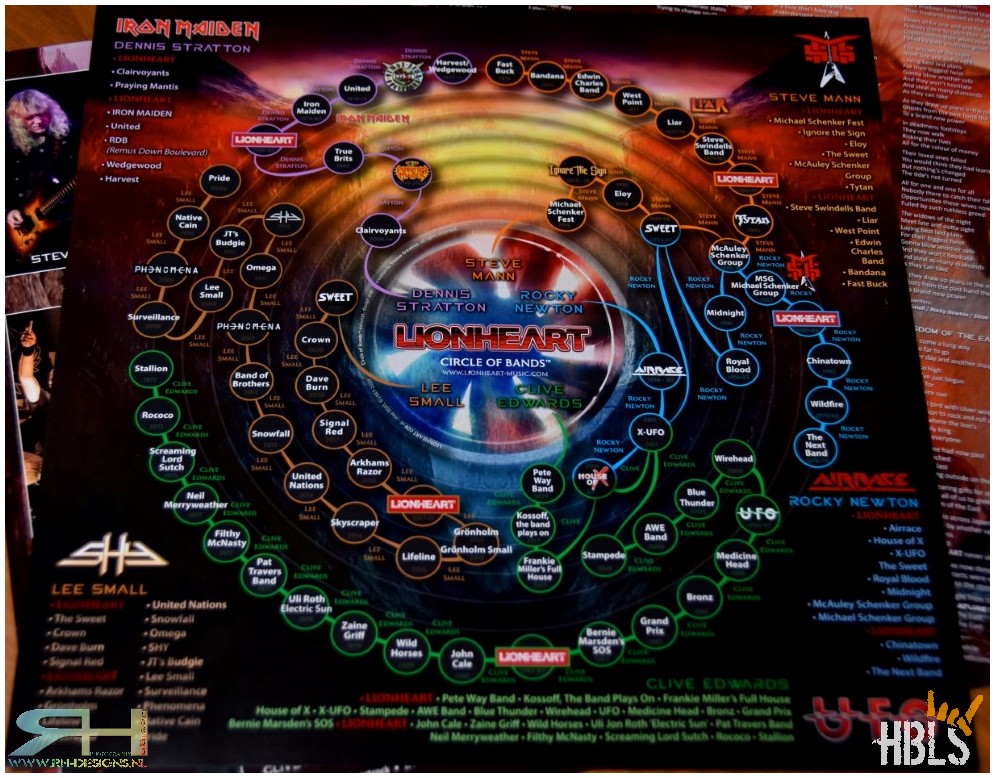 The record comes with a printed inner sleeve that has all the song lyrics printed and an extra inner sheet that details exactly the rich history the band members have.
By any means, the way all this is designed is just a feast for the eye. 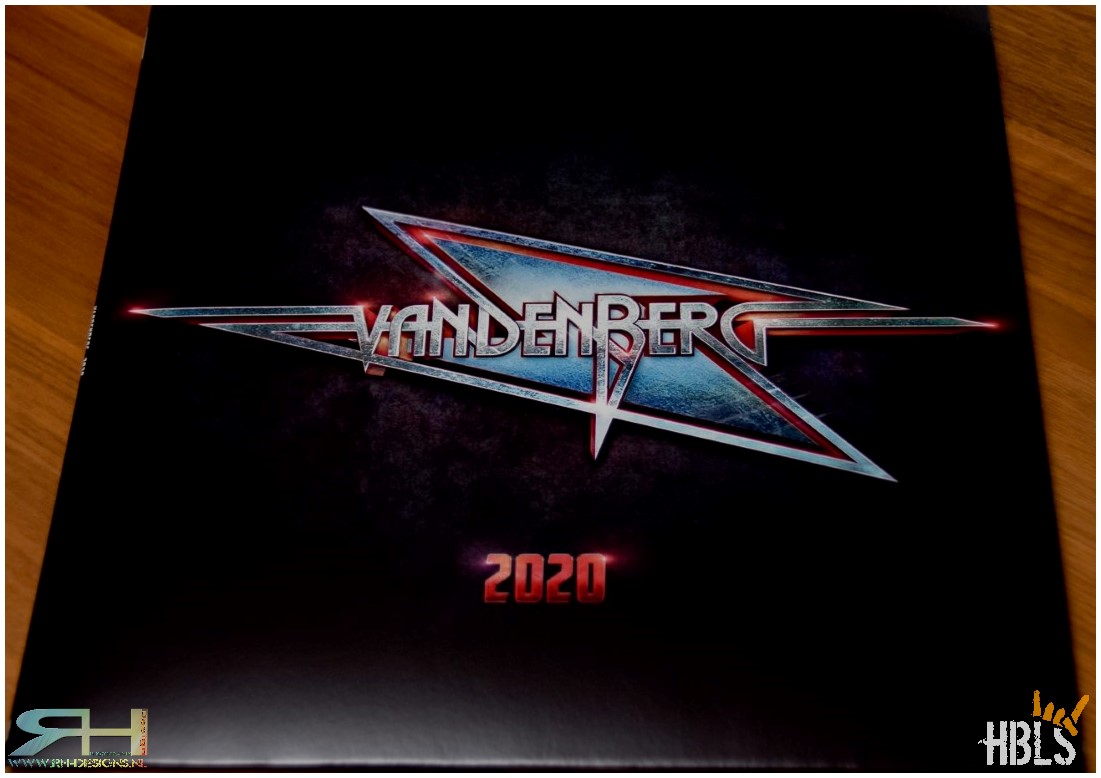 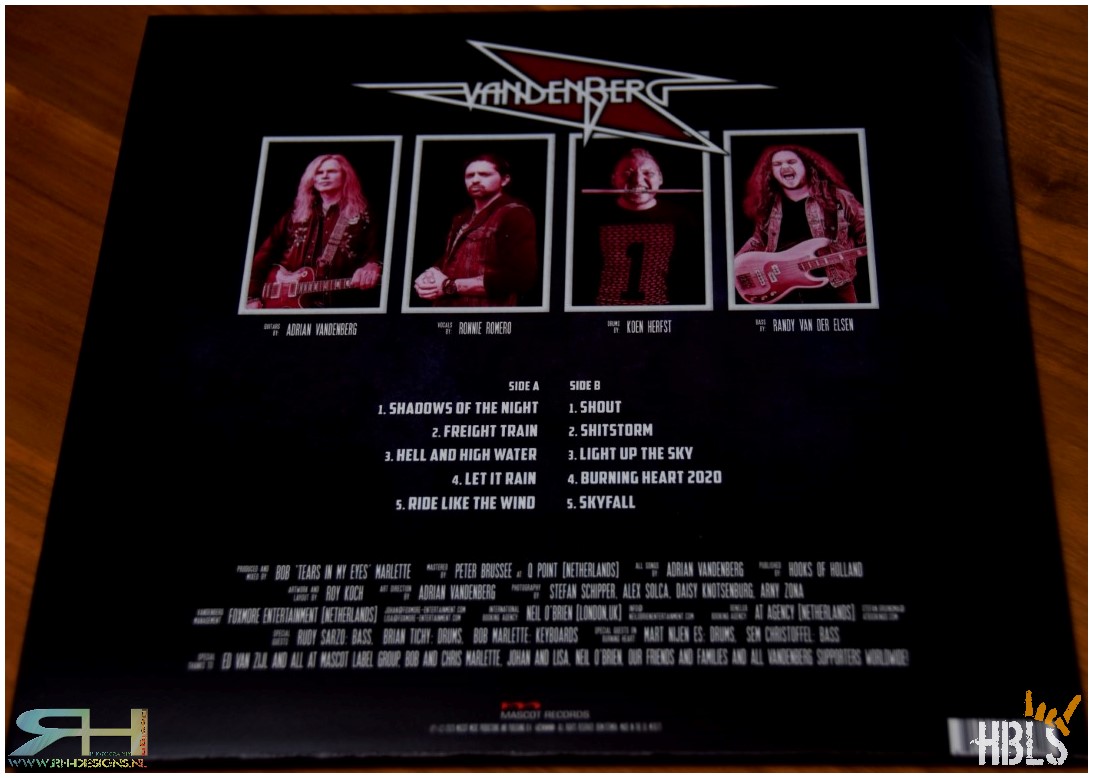 The second release I would like to address is Vandenberg ‘2020’ (Album review here).
This release comes as a limited edition 180 gram LP on red vinyl. And for the ones who also like to have the music in digital format, there is a download card included. The artwork has been kept a bit minimalistic to me. On the backside of the cover some pictures of the band members, the song titles and credits, in a somewhat movie poster like approach, which looks nice to me. 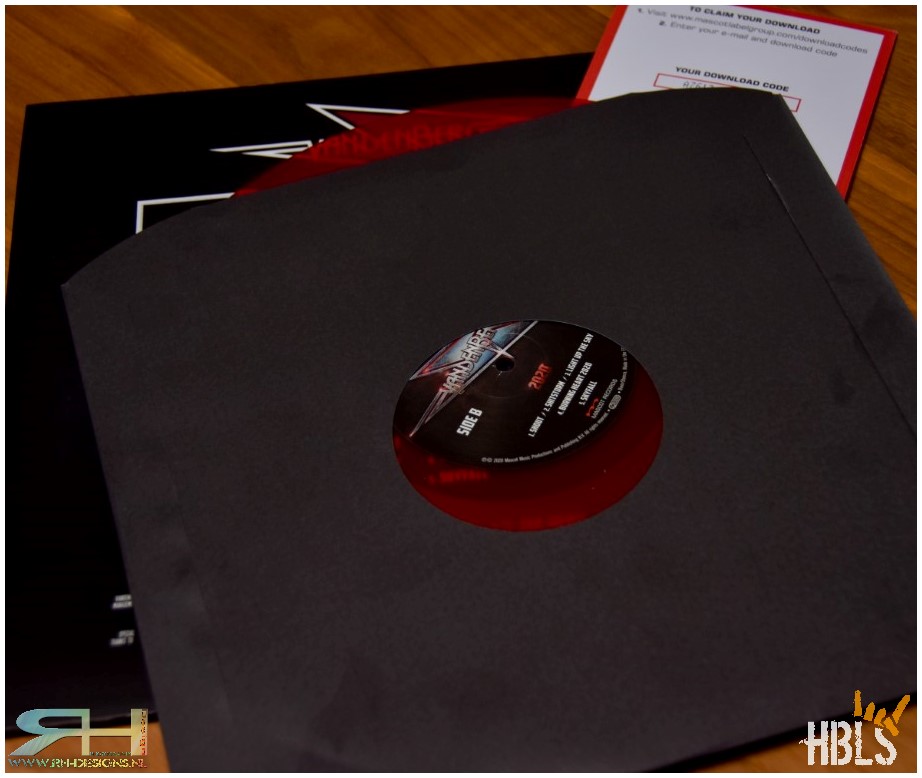 The inner sleeve is just plain black. A bit disappointing because I had hoped for a bit more details. But the plus side to all of it, the records sounds amazing. 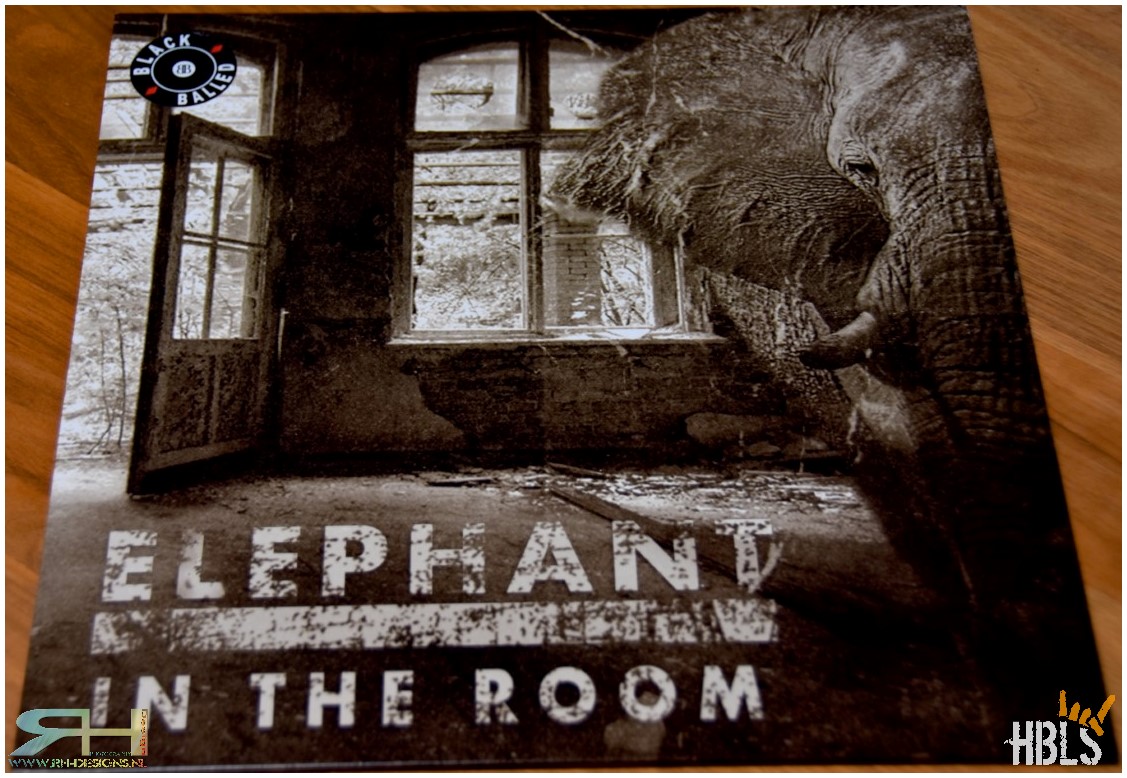 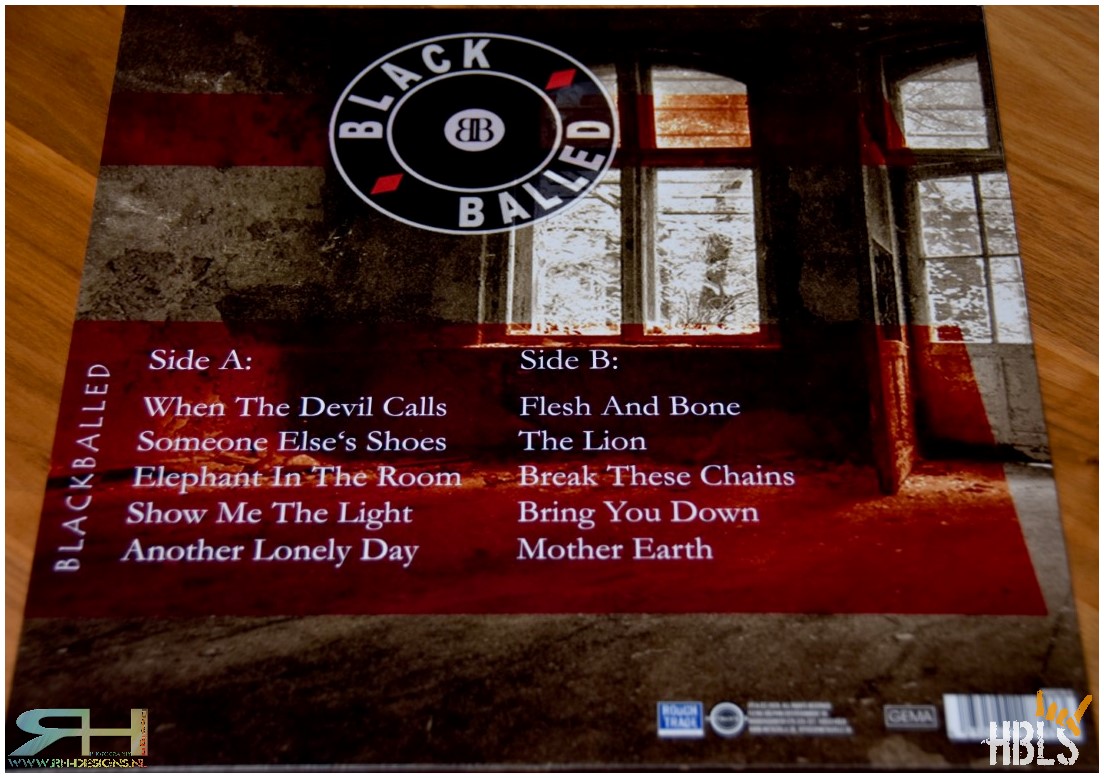 The next soon to be released [July 24th] record is ‘Elephant In The Room’ by Mancusion power trio Blackballed, the band around guitarist, vocalist Marshall Gill (ex-New Model Army).
I personally think that the artwork for this release is made with both the Vinyl as the CD release in mind. The cover has literally an elephant in the room and the backside contains the band logo and song titles. 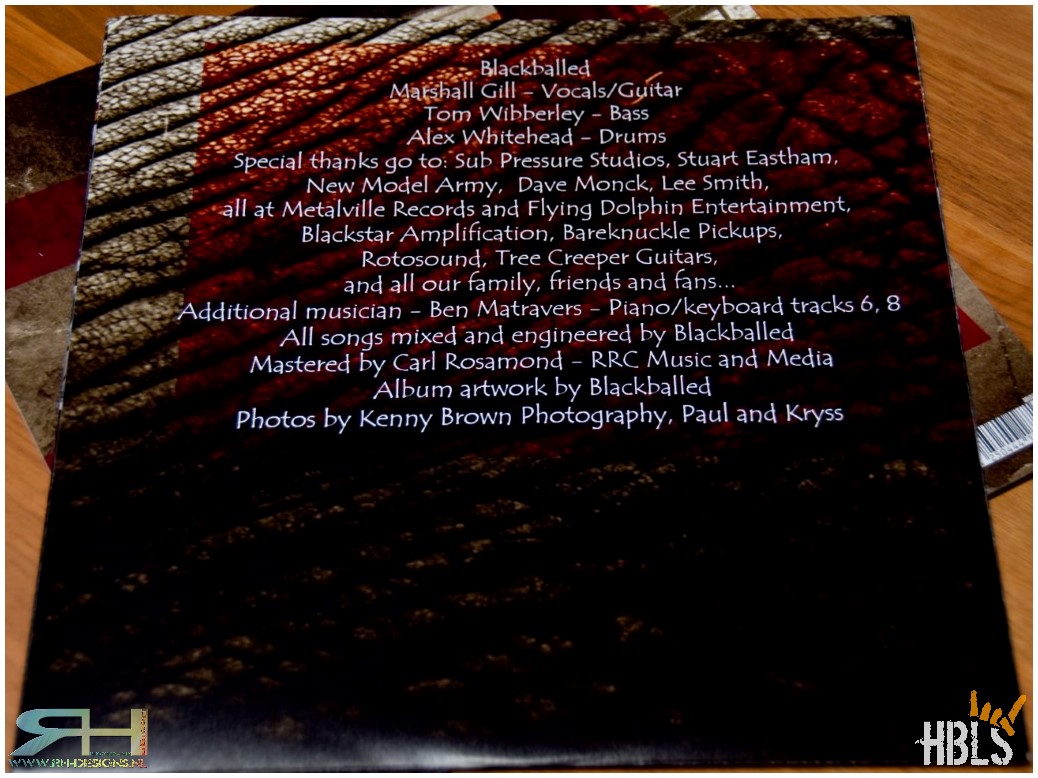 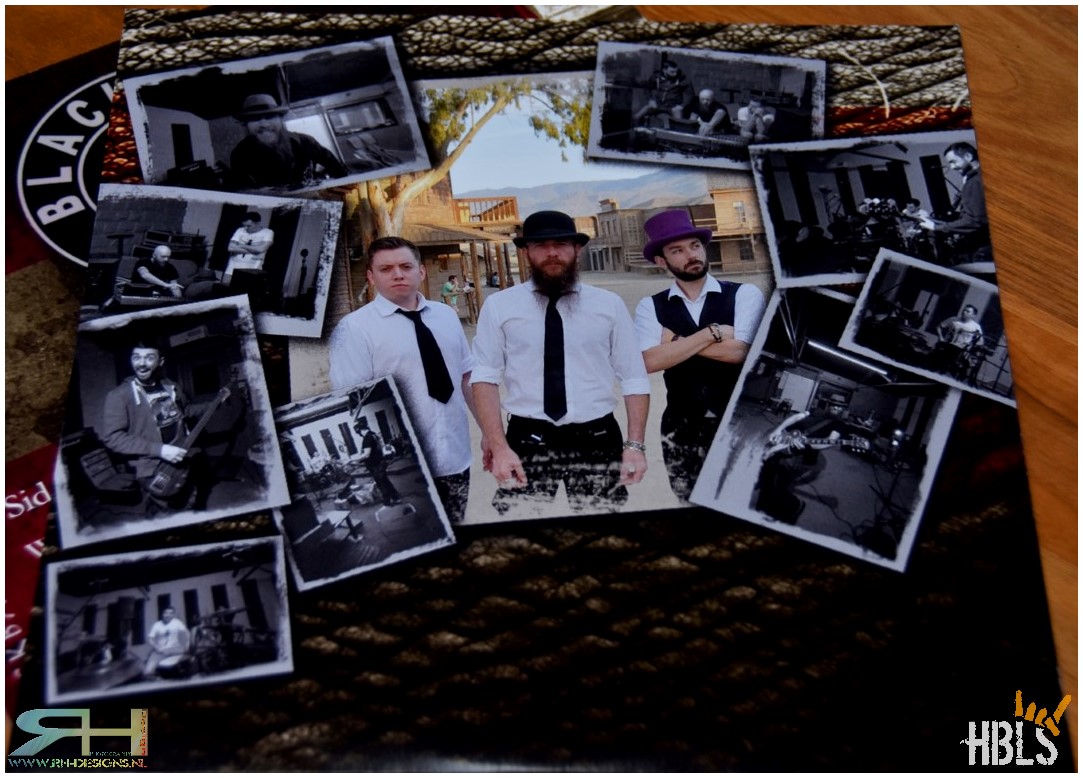 The printed inner sleeve has the credits on one side and some band photos on the other side. The complete artwork is done by the band and I think it complements their musical approach. 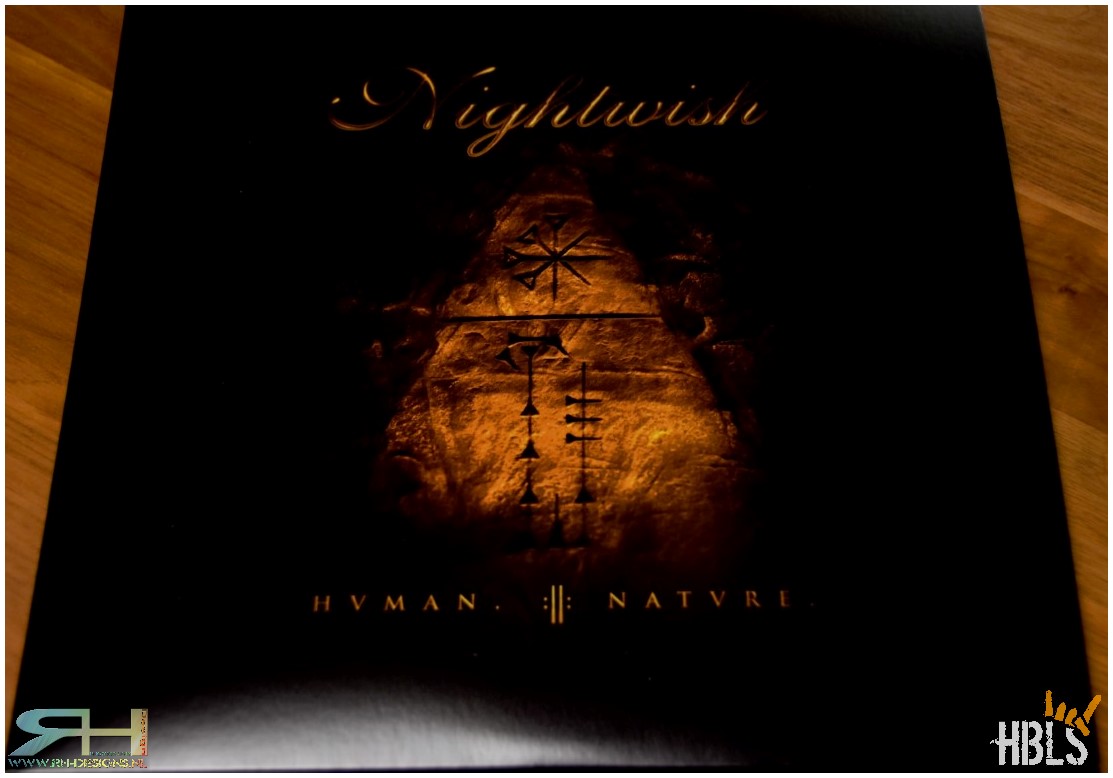 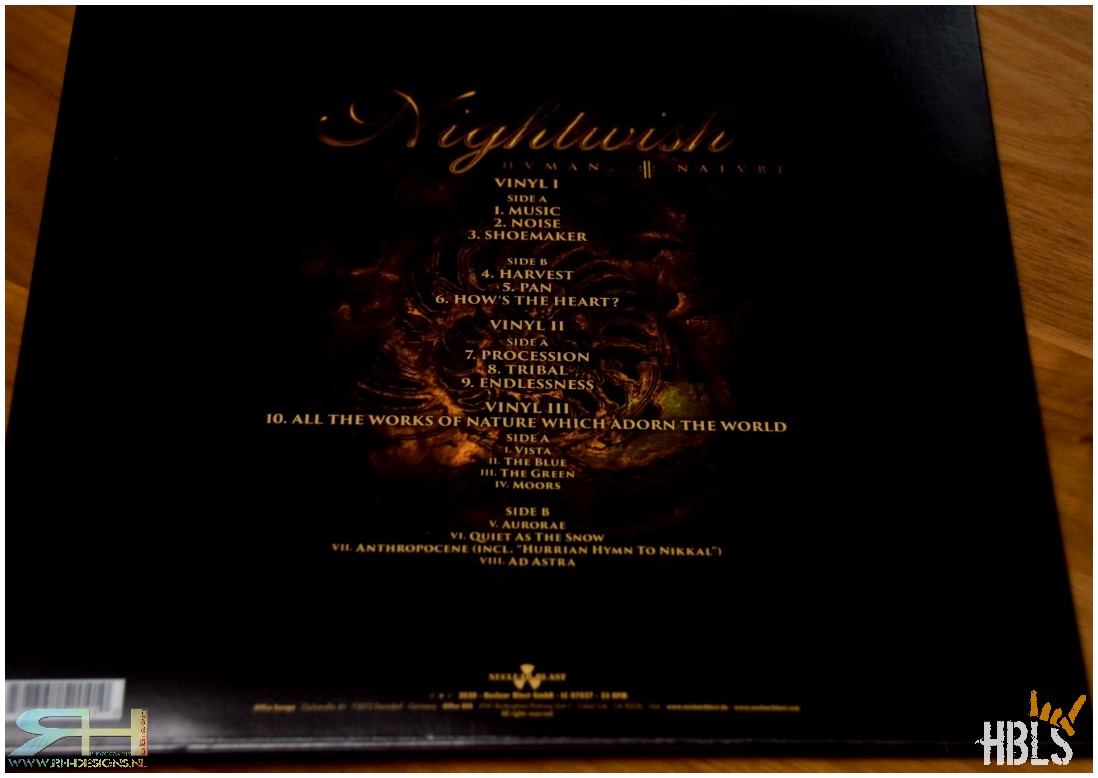 Last and surely not least I would like to pay some attention to the latest vinyl release by Nightwish ‘Human. : II: Nature’. (Album review here)
I really looked forward to this one because this band is know for really paying attention to their artwork. ‘Dark Passion Play’, ‘Imaginaerum’ and ‘Endless Forms Most Beautiful’ did all look amazing. So when I heard the new album would be released as a 3 record piece in various vinyl colors, I was delighted. When I finally got the product, I have to say, that I was a bit disappointed. No, not by the sound of the records itself, because they do sound amazing, but by the way the artwork for the release was done. In comparison with the earlier mentioned releases, the new artwork does not do justice to the music. I had hoped for a gatefold cover, but it came as a normal cover. The artwork is more of a minimalistic approach and on the back side we get all the song titles. 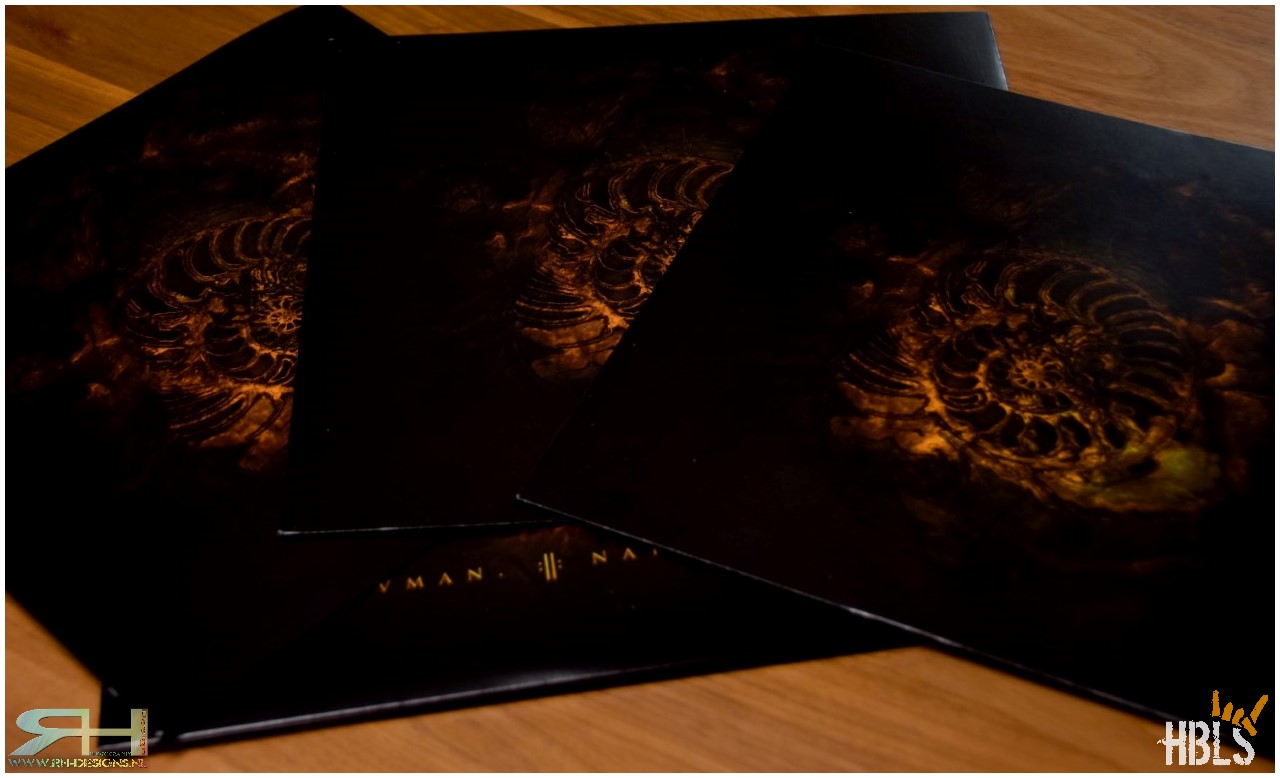 The printed inner sleeves are all the same. Which is not handy at all if you want to rapidly grab the specific record. The 12-page inner booklet itself is nicely done and contains all the lyrics, band photo, 4(!) pages of earthy photos that go along with the instrumental part of the record and the credits.
To me it would have made more sense if the lyrics and photos would have been used on the inner sleeves . That way it also would be easier to see which of the 3 records are in the sleeve.
Maybe I had too high expectations for this release, based on earlier releases, but as I have mentioned before, the way it looks is a bit disappointing to me.