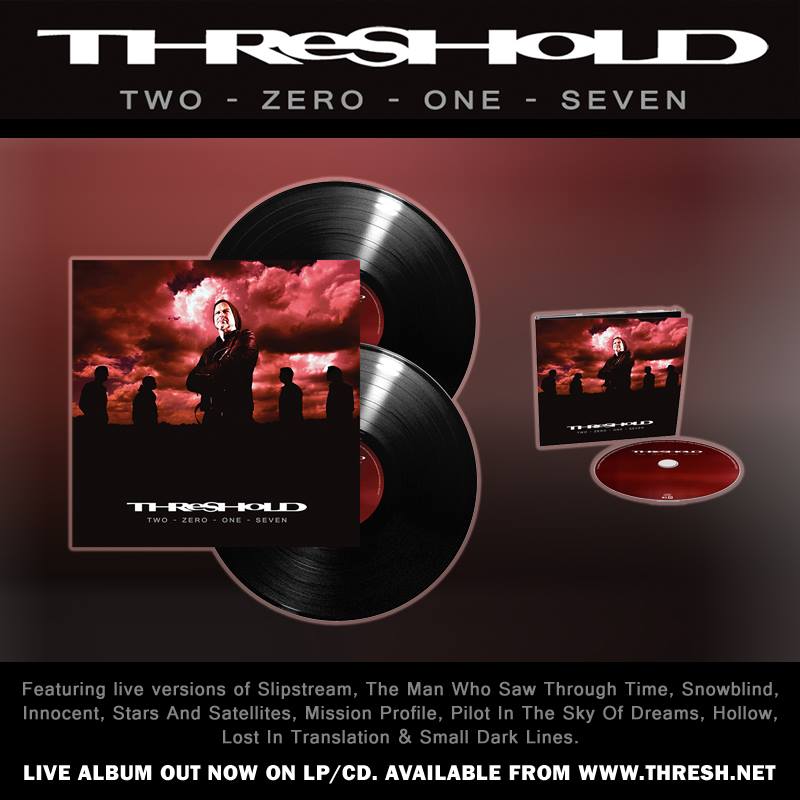 Hi there good people and how are you all? Good I hope? Then let me begin.

The live Threshold album `Two – Zero – One – Seven’.
Do you have it? It was two years ago now. When I first heard it, I thought to myself, who’s this? It didn’t sound familiar to begin with and then it hit me, it was us. It sounded really good, not that Threshold sound bad, it’s just that it, I had to take a step back and say, well done. I do believe that it was recorded at The Colos-Saal in the town of, you know what, I’m not even going to try and either spell or try to pronounce it, so I’ll leave it to you. Thank you. It was one of the best shows of that tour and I had no idea that a live album was going to come out of these performances. It captured a moment of one of the most successful Threshold tours since I joined the band some 22 years ago. I only hope that it can be bettered at some point in the future. Tell you what though, it’ll be a hell of a thing if we can, and something we can look forward and aspire to. I usually say to the chaps after a good show, “The best is yet to come” and it is. Have we realized our full potential? That is a question that only time can answer. As you know there have been recent line-up changes, all bands go through them, you very rarely end as you begin. But in saying that, some bands do manage to keep the same came line-up throughout their career.

Every track has its magic and you will all have your favourites.
You know, the track that you will listen to again and again. Do I have a preference? Yes I do, but you’ll have to guess which one it is, and answers on a postcard please to, noneofyourbusiness@eatmyshorts.com. I am kidding, it’s …. ?
I’m not sure what else I can say about this album other than it’s a great live Threshold album and I hope you all not only enjoyed seeing us on that tour, but giving the CD a good listening to. Remember, you were part of it too. Your voices are there for all to be heard!