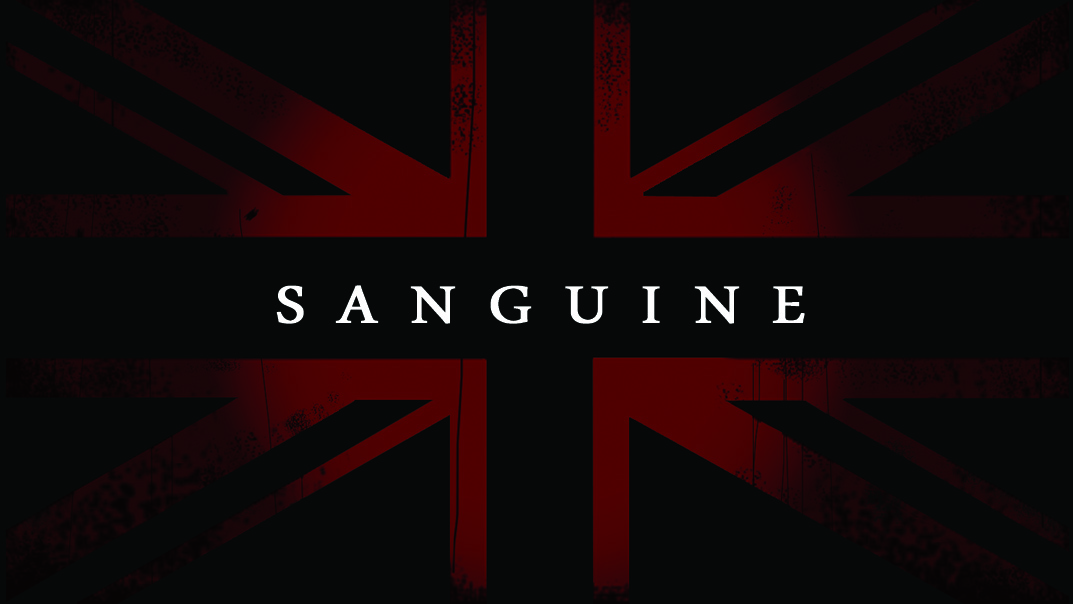 It’s been an exciting year for SANGUINE since the release of their first full studio album `Black Sheep’. The journey which began in Gothenburg with Ex In Flames six stringer Jesper Strömblad, has seen the band on a non stop rollercoaster ride ever since, spreading their own unique brand of alternative metal across the globe.

S A N G U I N E release new video “Breathe Out” featuring Jesper Strömblad Since its release `Black Sheep‘ has seen SANGUINE tour thousands of miles across the world with a host of legendary artists including Fear Factory, HellYeah, Skindred and MushroomHead to name a few, filling venue’s across the UK and Europe and impressing audiences with their eclectic brand of extreme music coupled with their notoriously energetic live performances.

In true SANGUINE fashion their next release veers the SANGUINE train onto a completely different track and show’s that they can be just as beautiful as they are brutal. SANGUINE and Strömblad once again prove that the amplifiers do not always need to be turned up to 11 to blow the roof off the building and this song is testament to that.

,,Breathe Out” focuses on the enormous vocal range of SANGUINE’s frontwoman Tarin Kerrey. Tarin’s voice has become well known in the music industry after gaining recognition both with Sanguine and from her guest appearances on Adrian Smith’s solo project Primal Rock Rebellion. ,,Breathe Out” showcases just how powerful, delicate and hair raising her voice can be.

Shot on the notorious and stunning island of Ibiza, by long term friend and Director – Carl Shanahan, Breathe Out see’s Tarin walk through the empty Spanish streets gradually discarding her possessions as she goes. The music guides her on this journey with beautiful guitar solo’s from Jesper and string arrangements from Producer – Daniel Flores weaving in between her soothing and mesmerizing vocals.

With more tours in the pipeline, a flock of fans behind them and new material on the horizon it seems that the SANGUINE train has no intention of stopping anytime soon. 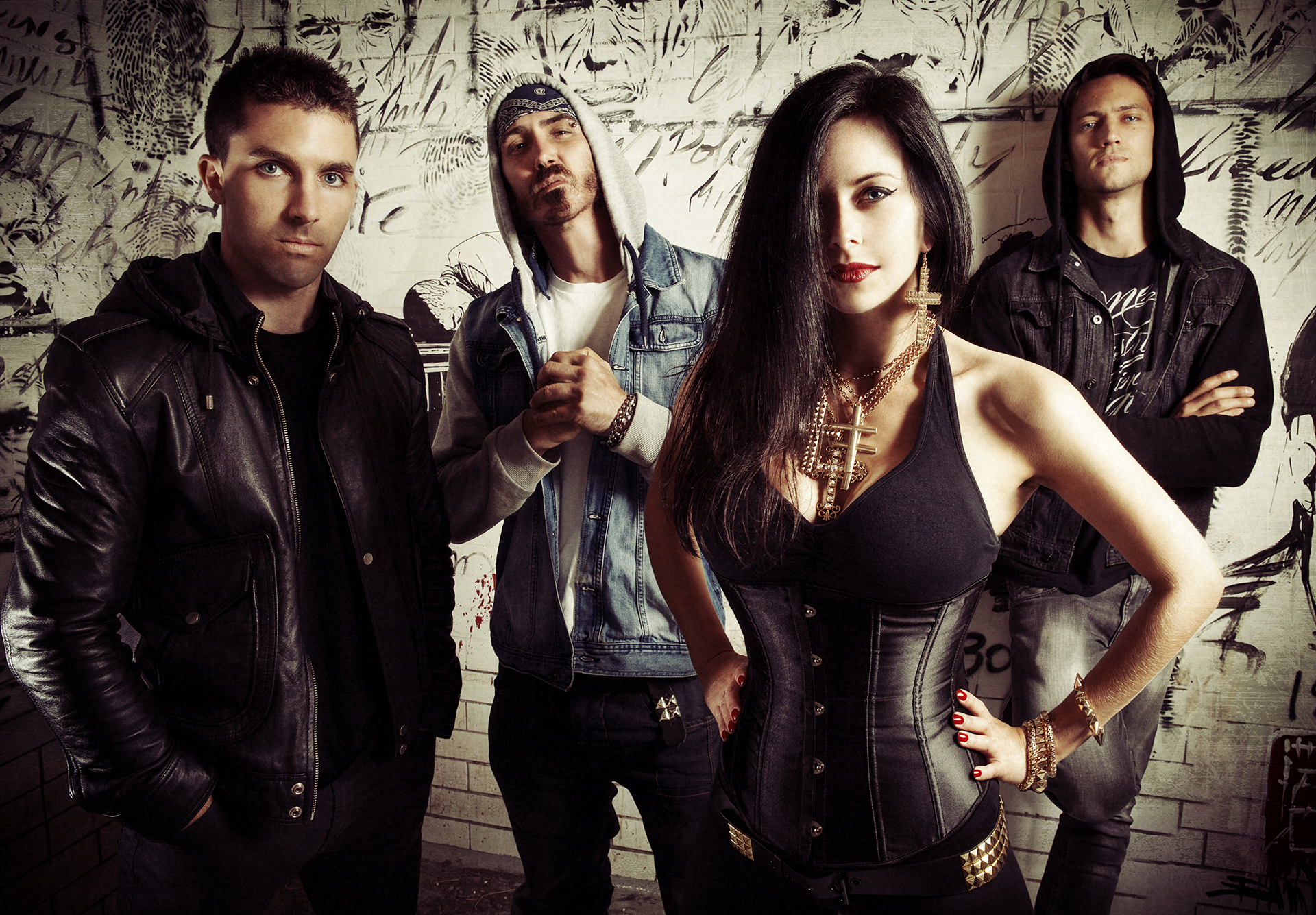 AN UPDATE
HeadBangers LifeStyle asked guitarist/singer Nick Magee and singer Tarin Kerrey a few questions to get more insight into the release of the video clip ,,Breathe Out’’.

Why did you decide to make a video clip specifically for the song ,,Breathe Out’’, a year after the album `Black Sheep’ was released?
Tarin: ,,I always loved the song, it has a real special meaning to me. It’s about letting go, letting go of emotions, just “breathe out” as the saying goes. When we first started putting the `Black Sheep’ album together we went to Sweden to meet Jesper Strömblad for the first time. He selected this song as one of the songs he wanted to work on as he had such an awesome idea on how to accompany the guitars. Now that a lot of our fans have commented that they love the track it only seemed fitting to make sure that this song had a video. We actually shot this a while ago but haven’t had the right time to release it yet due to touring with such major heavy acts. We felt that we wanted to separate it give it the attention it deserved.’’

Why did you film the video clip on Ibiza?
Nick: ,,We had a show out in Ibiza so we coaxed our buddy/Director Carl Shanahan along for the ride. It was a pretty funny trip, the show was awesome but outside of the show there were some pretty funny moments. We had this £10,000 camera with us and no insurance. At one point we had to dangle Carl over a bridge to get a shot he wanted. I’ll give it to him he’ll do anything for the right shot! We also got attacked by jellyfish shooting the water shots and the camera was mounted in a rubber dinghy with me in the water in case he dropped it. I was watching out for jellyfish and giving them a count down as they got closer and closer to us. I hate jellyfish.’’

Tarin, how did you experience the making of the video, being the main character?
Tarin: ,,The funniest moment I remember was filming a shot in front of the church and a middle-aged male tourist stood right in front of me and because we had started filming the shot I couldn’t look away. I just sang the song right at this guy’s face…he was wearing some ridiculous shorts eating an ice-cream whilst staring at me in confusion… All I could do was try and bite the inside of my cheeks because I wanted to start laughing! He just kept staring right at me, eye-to-eye unblinking…a bit awkward.’’

Tarin, I have to ask. It looks like the water you are walking in, in the end of the video was super cold. Will you do anything for a video or are there limits in your book?
Tarin: ,,Yes that water was bloody cold and bloody hell there were sooo many jelly fish! Ever wonder why some beaches never have anyone in the water?!! Well we decided to shoot at one of those beaches! (laughs) I’ll do anything for my art, within reason, I climbed on top of bins, walked down some dodgy cliffs and ended up getting badly bitten in the face by mosquitoes during the last couple of days of the shoot! My face did swell up like a balloon but it was so much fun, I didn’t really care! I was with my band, everyone was having fun hanging out in Ibiza…we had such a laugh…so many stories…not all of them we can talk about!’’

What does ex In Flames guitarist Jesper Strömblad as a guest musician add to this song?
Nick: ,,Jesper is an amazing musician and his sound is so distinct. He’s a really nice guy and I think that kind of comes out in how he plays. He brings an energy that can only be described as his. You can hear it in every band he’s played with. Not many musicians have that to the degree he does. We had written the vocals and some of the guitars already but when he started working with us it took on a totally new angle. He added layers that we wouldn’t have thought of and his solo was just awesome. I watched him play it and it was so fluid and natural to him. His fingers look like they guide themselves when he plays. It was a big honour for us to get to work with him.’’

How do you look back on last year, since `Black Sheep’ has been released?
Tarin: ,,To be honest it’s blown our minds. We’ve got to do things and see places that we never dreamed we would. The love we’ve had from fans has been incredible. People travelling from all over to see us at shows and the stories they have told us about what `Black Sheep’ meant to them has been incredible to experience. We have the best fans. I’m sure everybody says that but they are wrong! Ours actually are the best! Other things that have happened on a personal level, for example, Fear Factory were a huge influence on Sanguine so to get to tour with them in awesome places like The Netherlands was amazing. It’s one thing meeting your heroes but even better when they are really nice people. We’ve been lucky with that – toured with some really cool peeps like Hell Yeah. Sanguine as a band just keeps getting closer, you keep pinching yourself and saying “wow, I’m stood next to Vinnie Paul….f**k!”.’’ 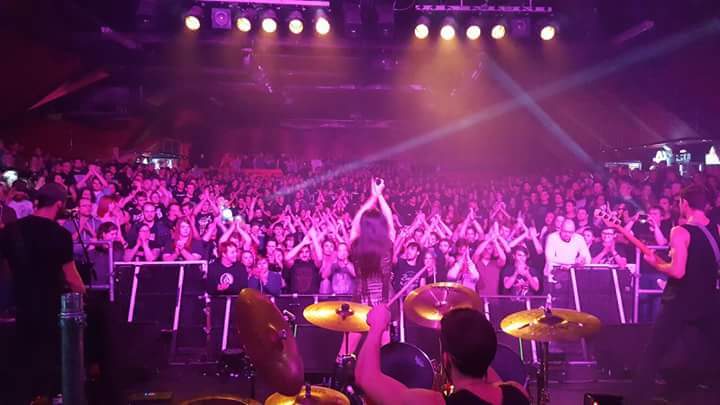 Can the fans expect a new CD anytime soon? And where is the band heading musical wise with the new songs?
Tarin: ,,Yes, yes and yes! In between touring we have been writing like crazy. We tend to write a lot of songs and then narrow them down. For `Black Sheep’ we wrote over 20 songs for example. We are sitting back and taking in what we have done at the moment but it is sounding awesome and the creative process has been so much fun. It helps that we’re all best friends so Sanguine is just an extension of us hanging out. We spend most our time with each other and when you tour it bonds you in a weird way that is unlike any other relationship. It’s like a weird marriage. The next album will be out next year and it is very melodic, even when it’s heavy it’s still melodic. We always want to release high quality music as we want our fans to get the best experience so we are just grooming it over before we make the final album.’’

Where would you like to see the band in 5 years?
Nick: ,,We don’t ever plan in that way because the industry is so unpredictable. We have had so much weird and awesome stuff happen to us that we never could have predicted. We try and just enjoy the ride because that keeps you inspired and when your inspired you write better music. I guess there is a curiosity as to how far it can go as well – we love building this history because the memories it gives you. You can’t take anything else with you so your memories are pretty damn important!!’’
Tarin: ,,Yeah, Sanguine has grown every year, and that’s the brilliant thing about music…you never stop learning! In 5 years I might have taught myself how to play a piano….or re-tune a drum kit….or I might be just exploring new ways of using my voice…who knows? That’s what being a musician is all about. I think that some bands give up too easily…I see so many bands disbanding because music is freakin hard! It’s hard to make a living out of what you do…but then you are so lucky to do what you love…and that’s the funny relationship between the struggle and the rewards of being a band! Sanguine is like my family, a lot can happen to a family in 5 years!’’
—
Follow Sanguine on Facebook and visit the Website here