HANGING UPSIDE DOWN ON THE CROSS: 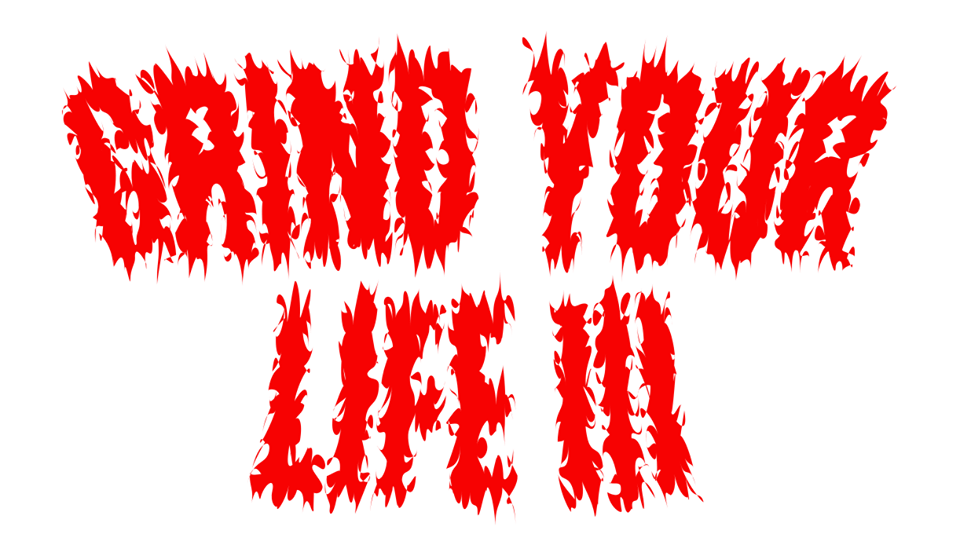 HANGING UPSIDE DOWN ON THE CROSS:

GRIND YOUR LIFE 3.0 was hosted by Extreme Underground Tripura on October 11, 2019, at the Hotel Haven Intercontinental Agartala, in Tripura, a State in north-eastern India, the capital city being Agartala. The line-up consisted of local bands: SOLSTICE, DECIPHER, SECRETS OF SILENCE, FOETAL DYSTROPHY, and DEATHAPHOR, with the last two sharing the co-headlining position. There had been a small hitch in plans when the international headliner, WISHDOOMDARK, a Doom Death metal band from Russia, met with obstacles at the Delhi airport and were refused further entrance into India. After a few minor panic attacks by local organizers, it was decided the show must go on, knowing that most of the gig’s ticket-buyers were coming to see their favourite local bands anyway. No blood was lost by the ticket takers the next day. 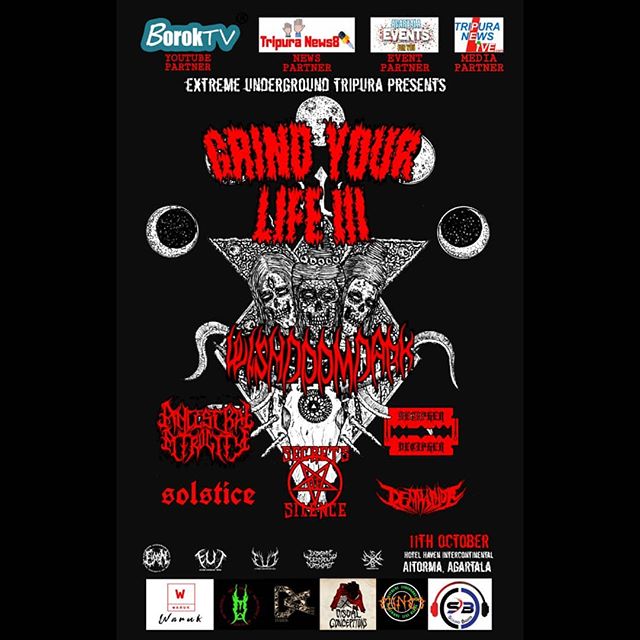 I, the addicted reviewer of underground bands, bought a plane ticket and flew there, psychically knowing that even though I’d never heard of the place, that the gig would be successful and that the crowd and bands would be amazing. And I was right. All early Black metal bands had their own sound. I was dying to tap this remote but dynamic Black metal scene to bring myself up to date. One reason Black metal music was created was to stray away from traditional styles, progressions and structures. I found out using chords of 8 7, 9 8, 9 8, 7 6, with constant blast beats, no drum frills, plus Satan, (of course), fills the bill these days, I was not disappointed. 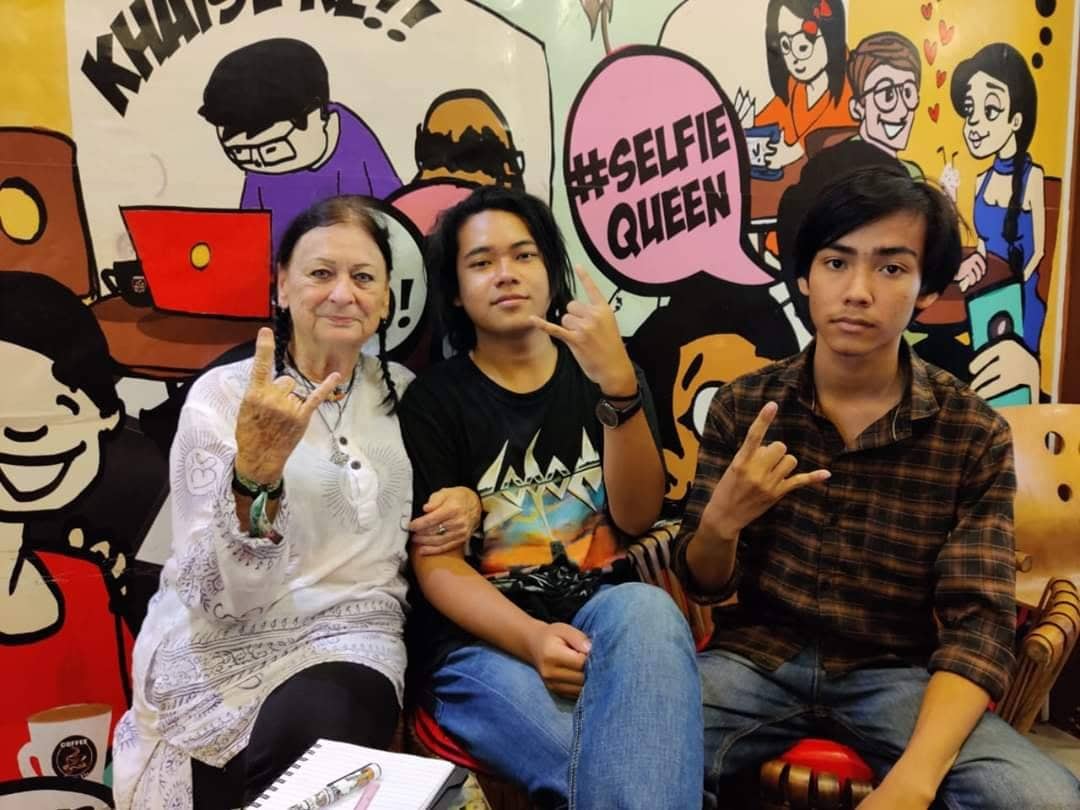 SOLSTICE, an experimental thrash band, opened for GRIND FOR LIFE 3.0, and consisted of Bivek Debbarma (bass), Saslong Debbarma (guitar/vocals), Amit Singha (skins) and Albez Debbarma (guitar). The crowd was treated to aggressive vocals, heavy distorted guitar riffs and the fast blast beats of drums. Lyrical themes focused on corruption, depression, and anti-politics and anti-religion sentiments. These young Tripura homies started out real early in life. Bivek was listening to Simple Plan and jamming at a friend’s house after school; Saslong’s parents bought him a guitar at 15 years of age! Solstice had played one local gig, Extreme Extermination, in 2019, and will keep entertaining metal heads in the future, for sure! 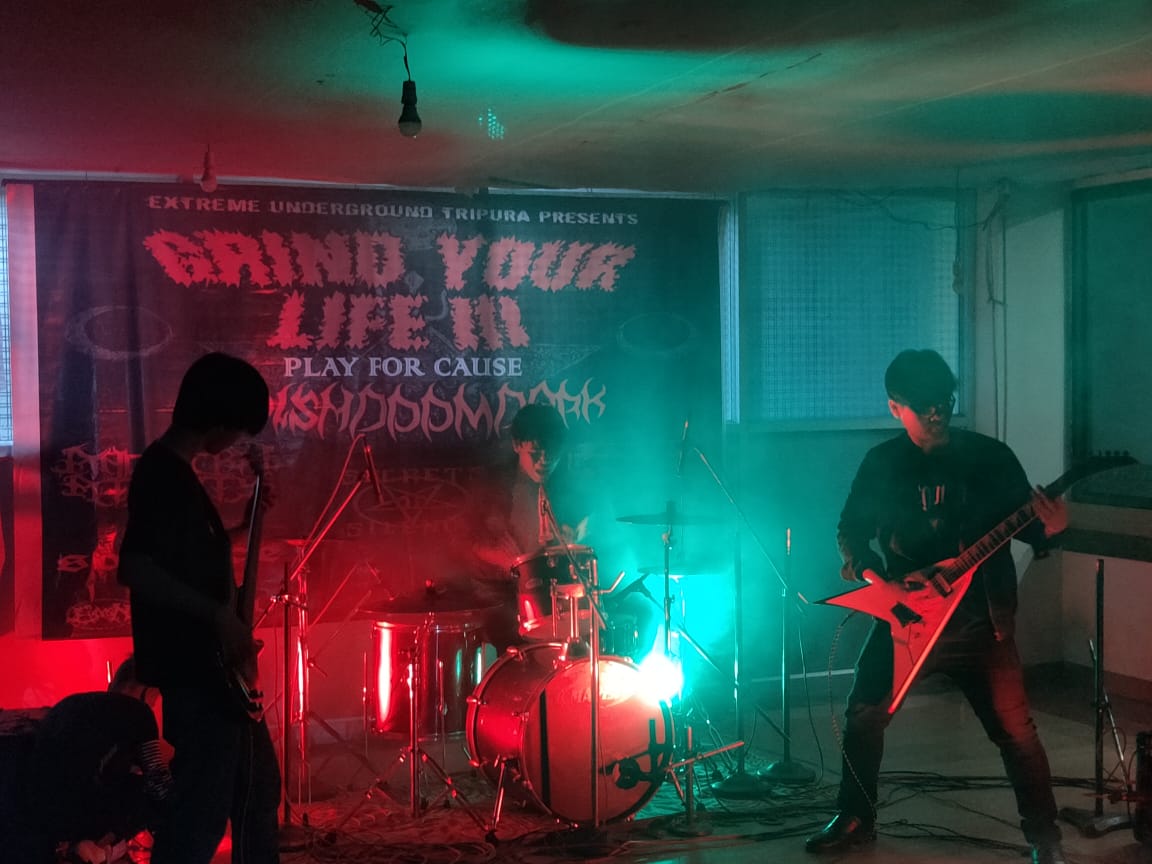 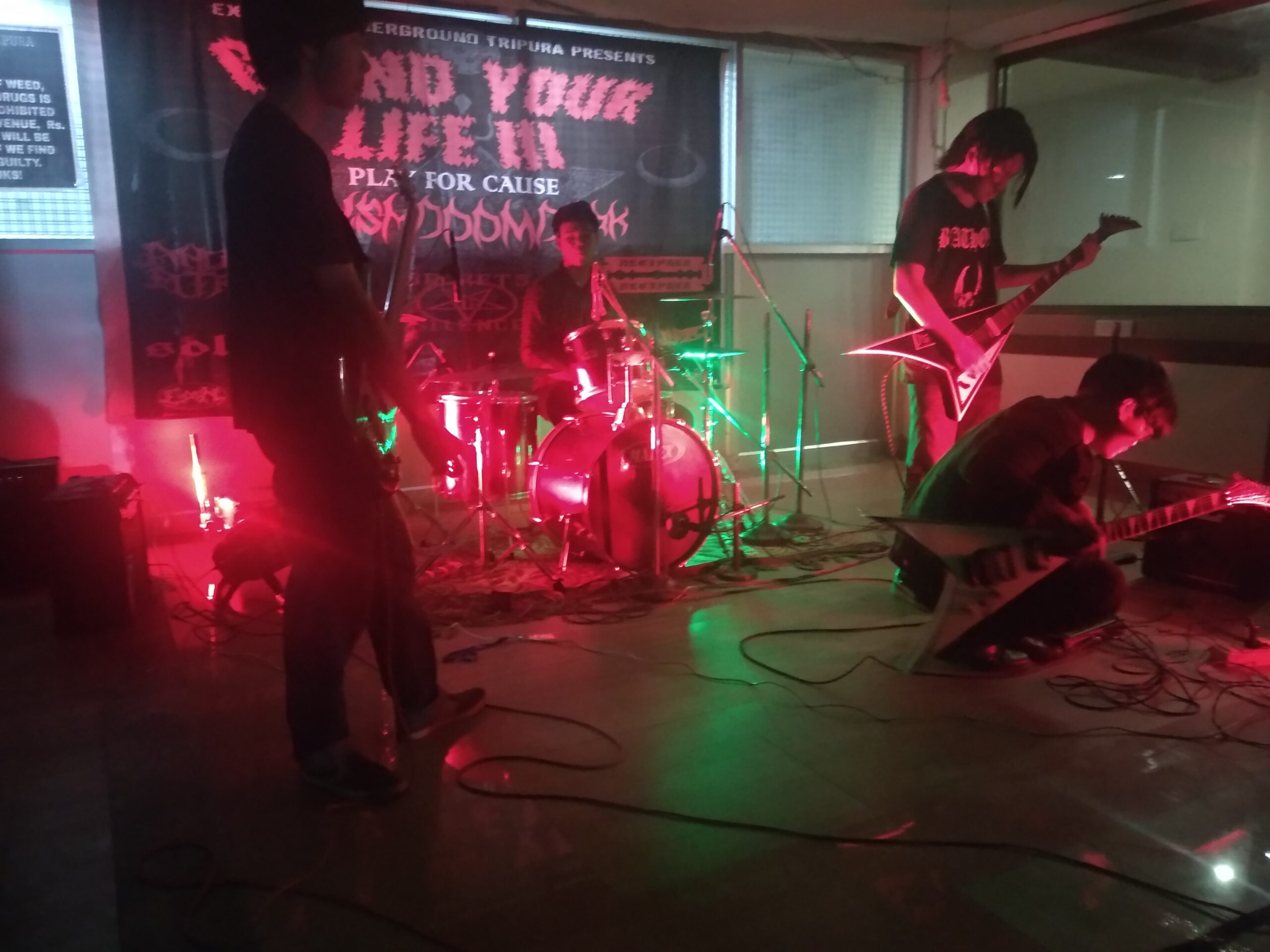 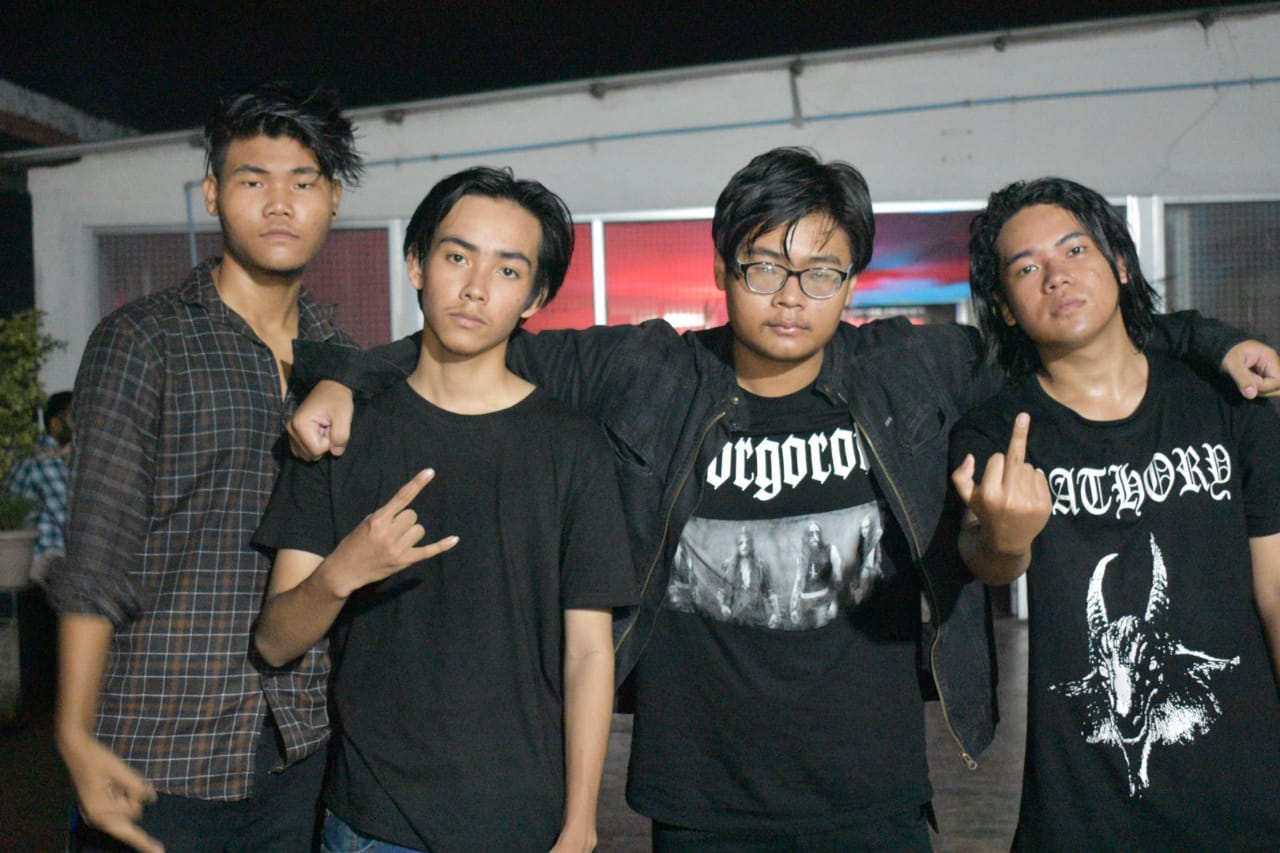 DECIPHER is a depressive suicidal Black metal project by Darkat Demogogonil Infernium and Deminium Morat Tormentahl, along with Jebtop Debbarma, who sat in as drummer. They produced an intense and extreme audience experience that had this impatient crowd falling to their knees, figuratively kissing the backside of an upside down cross in the fog. The band started off with the self-titled track ,,Decipher.” Mesmerized fans were unable to take their eyes off this band, or unglue their ears from the shrieking vocals of Darkat and grim bass lines of Tormentahl. Darkat’s vocal patterns and Tormentahl’s dark bass line together conjured up images of an undead corpse screaming while trying to claw its way out of a buried casket. Darkat and Tormentahl were jamming 666, but were way too critical of themselves. Session drummer Jebtop was an essential element in this craftsmanship of devil worship. Let’s hope they return next year, to continue this communion of lost souls. Hail Decipher! 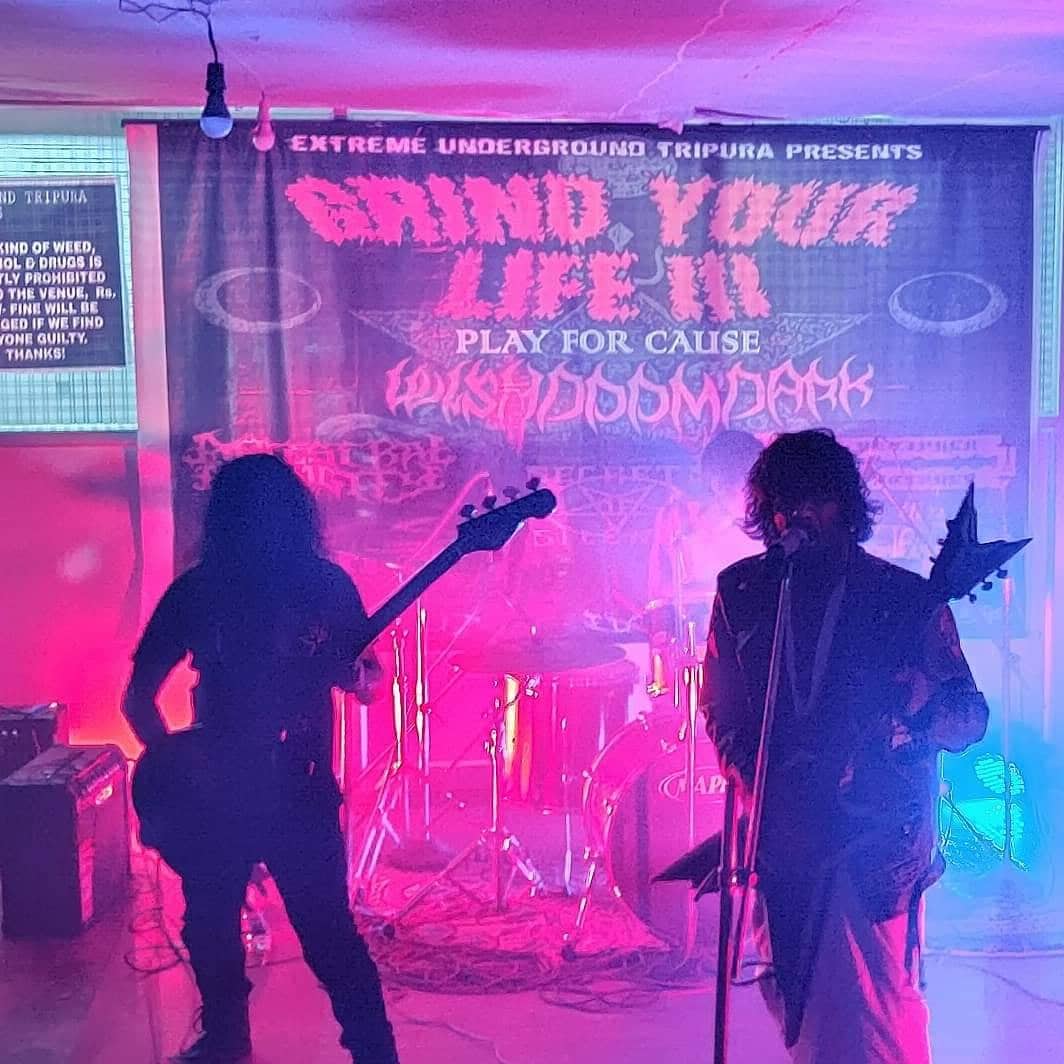 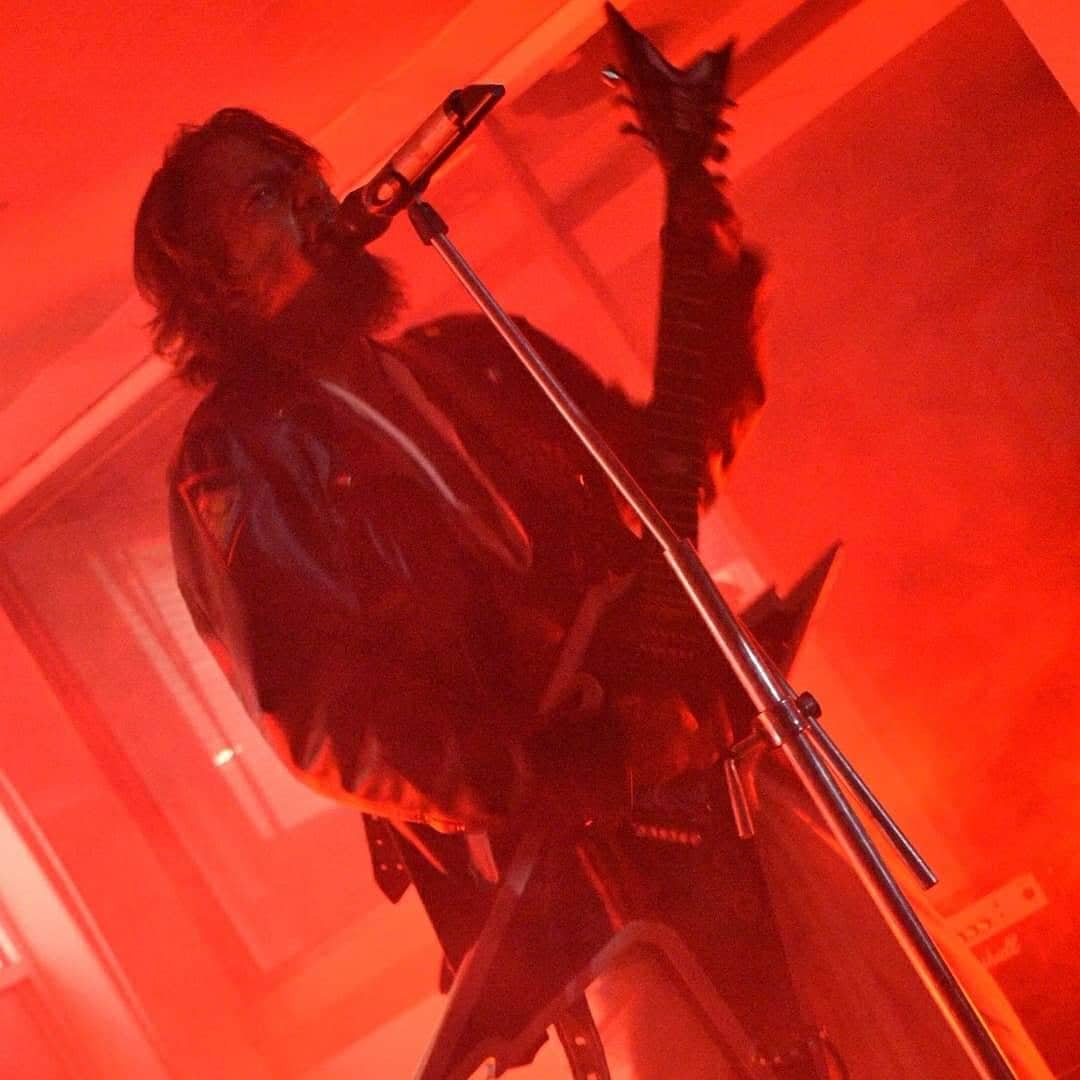 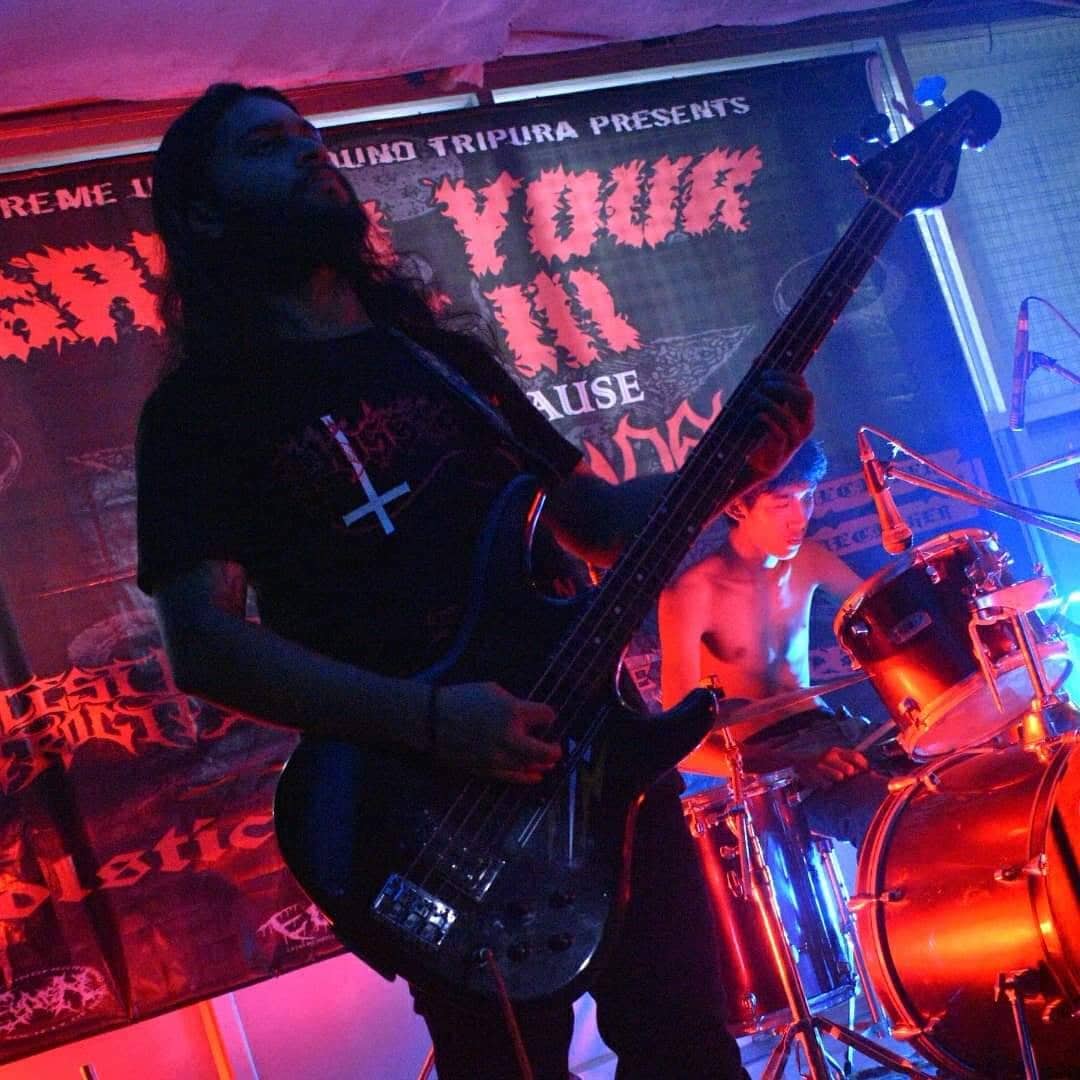 SECRETS OF SILENCE (SOS), was founded in mid 2018, by Sujay Debnath (vocals/bass), and Amar Debbarma & Diptanu Debnath (both on guitars). SOS is a Black/Thrash band that is influenced by metal bands such as Slayer, Venom and Mayhem. Owing to lack of a drummer, drumbeats were used. Their recently released 4-track EP `Satan’s Arrival’ was recorded in Ambient Studio. The track’s lyrics, written by Sujay, and friend “Tirthankar” explore the dark part of life and the Satan found in everyone. SOS burned our ears with riffs influenced by dark melodies along with speedy thrash riffs. 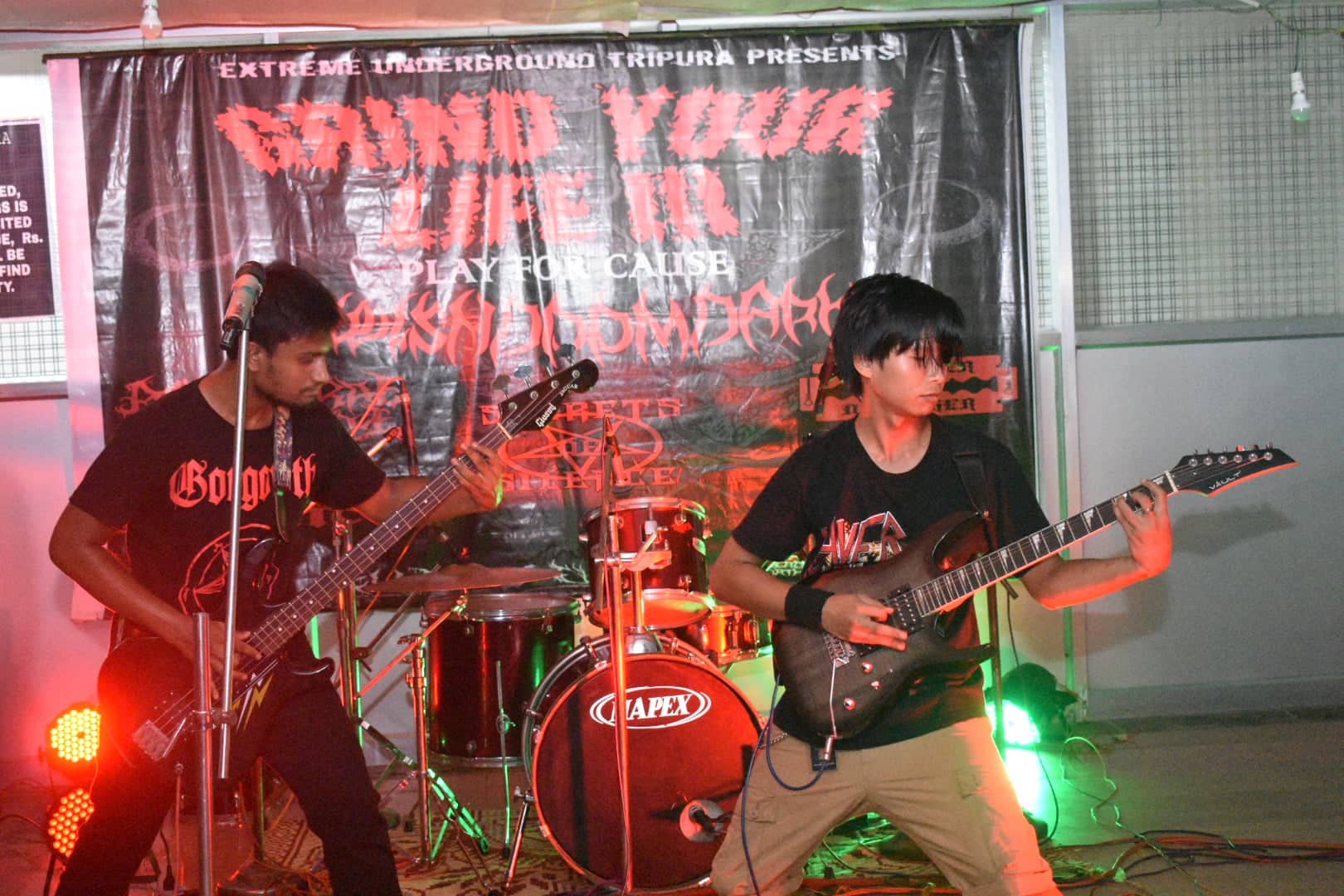 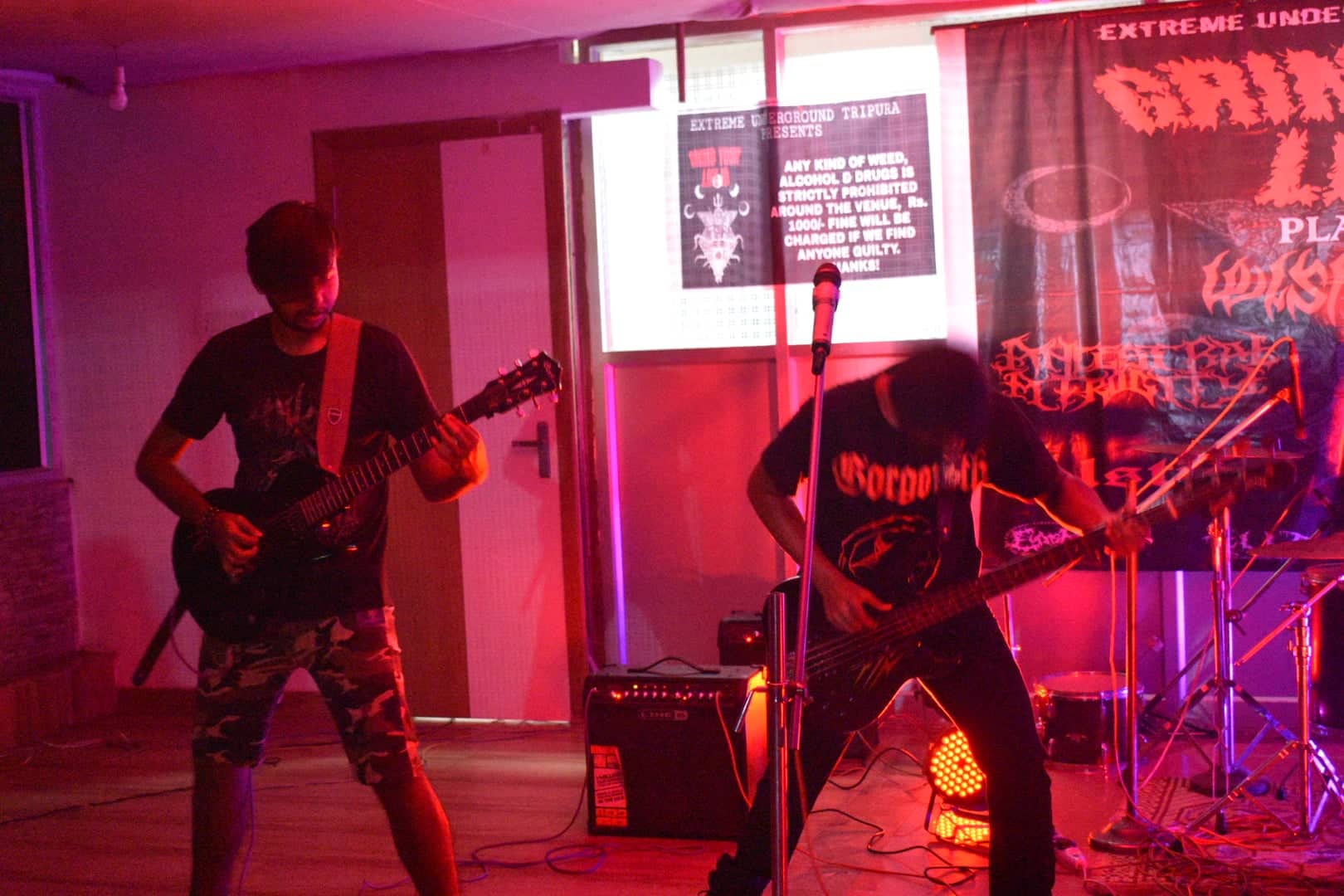 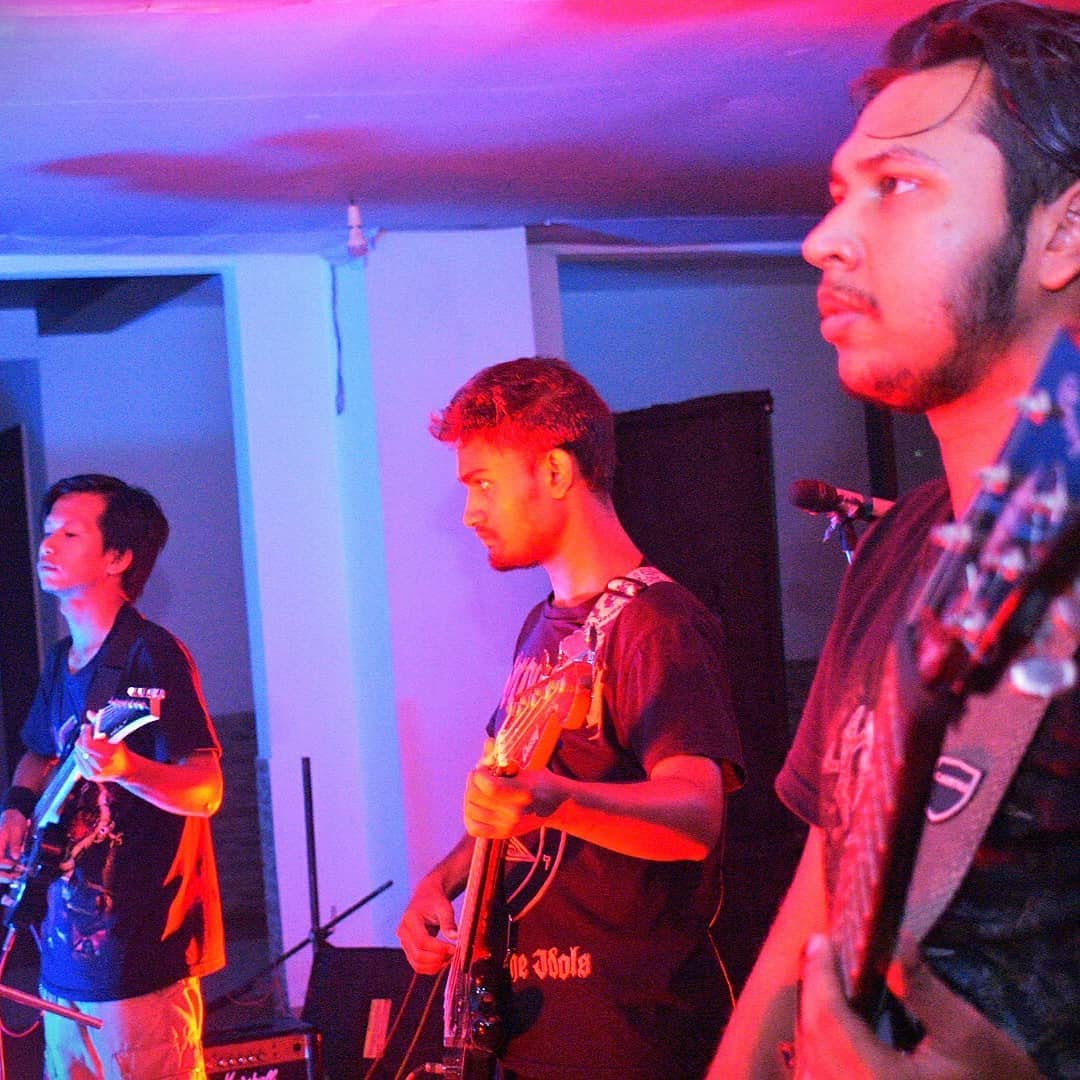 FOETAL DYSTROPHY, co-headliner, and founded in Tripura in 2013, consists of Tushar Debbarma (guitar), Martin Debbarma (drums), and Deli Kalai (growls/screams). These intense metal heads shredded brutality and shrieking vocals down upon an innocent crowd, causing some newbies to run home to mommy. Their unique sound of old school Death metal plus present day technical Death metal, emphasized lyrics based on killing, suffering and brutality. A huge group of happy fans were excited to see them again. Foetal Dystrophy journeyed to Nepal for their first international gig, ”Extreme Gore Fest” in 2017. Their CD `Dehumanized’ was available for sale at this gig. Get it online via foetaldystrophyofficial@gmail.com, or direct message to their FB Band Page (here).

DEATHAPHOR, a Groove/Death band, co-headliner for this sick show, is one of the earliest underground bands in Tripura. Nasen Chakna, lead solo guitarist, Adwaita “Smashhead” Chakma, vocalist, and John Jamatia, stepping in as drummer, showed us their love for metal music by pushing us towards dreaming in spite of our anger and frustration, exposing political corruption, and giving us hope of being a little spiritual! Nasen and Smashhead started out as teenagers, with no family support, a lack of organizers, no events to perform at, no proper recording studio, and being forced to take day jobs. They evolved, finally finding their genre after experimenting with R&B, Dance Music, Trance and Electro. The stage was declared a danger zone. Head bangers broke necks and the circle pit broke bones, due to Deathaphor’s pure, honest, and raw metal sounds, With releases in the Chakma language in 2011, 2012, and 2013, their single debut EP `Enemy of the People’ came in 2015. Deathaphor treat their fans and supporters with love and friendship and are hopeful for the future! 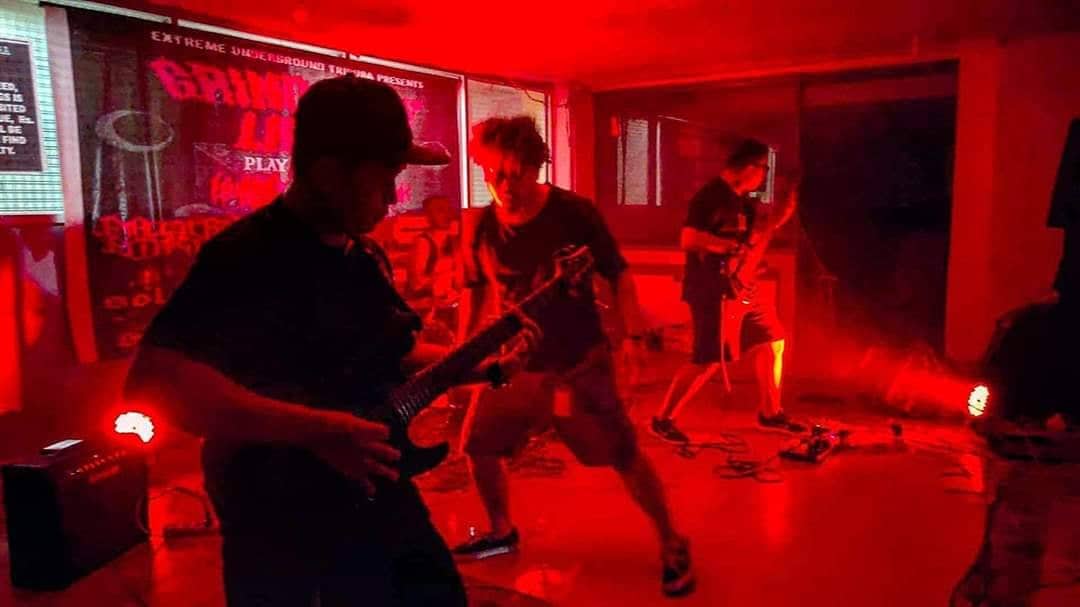 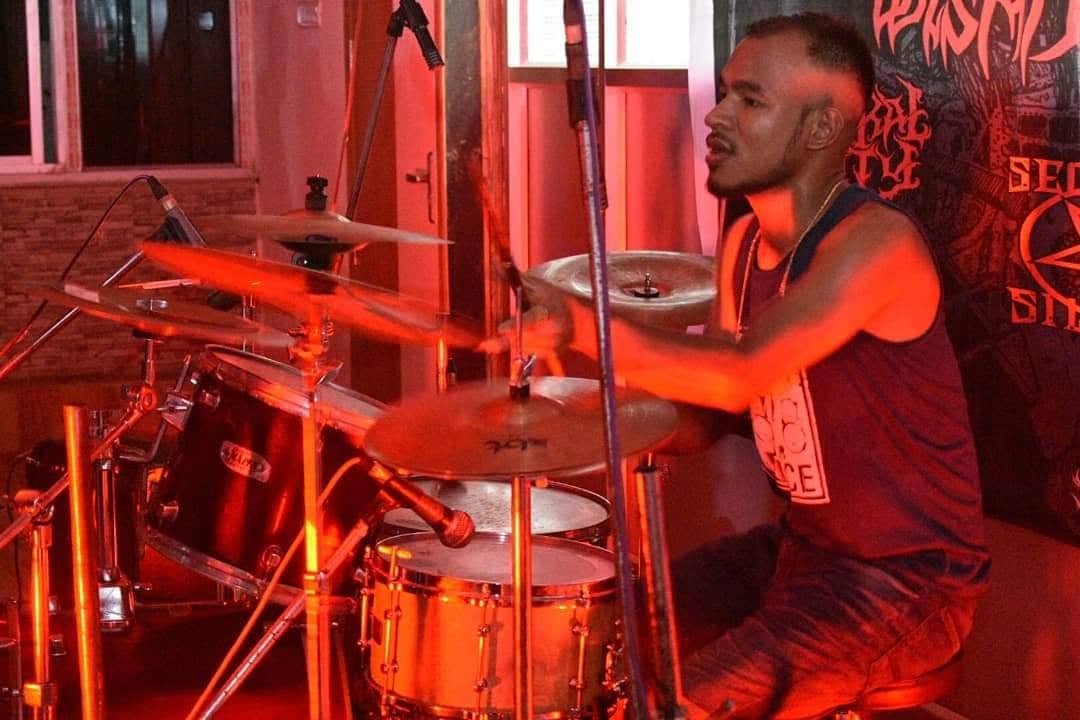 
Soumyajit Debnath organized this third edition of GRIND YOUR LIFE and he thanks the following bands: SOLSTICE, DECIPHER, SECRETS OF SILENCE, FOETAL DYSTROPHY, and DEATHAPHOR for making it a killer night and destroying Agartala. Soumyajit, totally from his heart, thanks all the fans and supporters who showed up to the gig, and feels that you guys are the reason Extreme Underground Tripura is still standing and can keep going forward. Till next time, stay extreme! 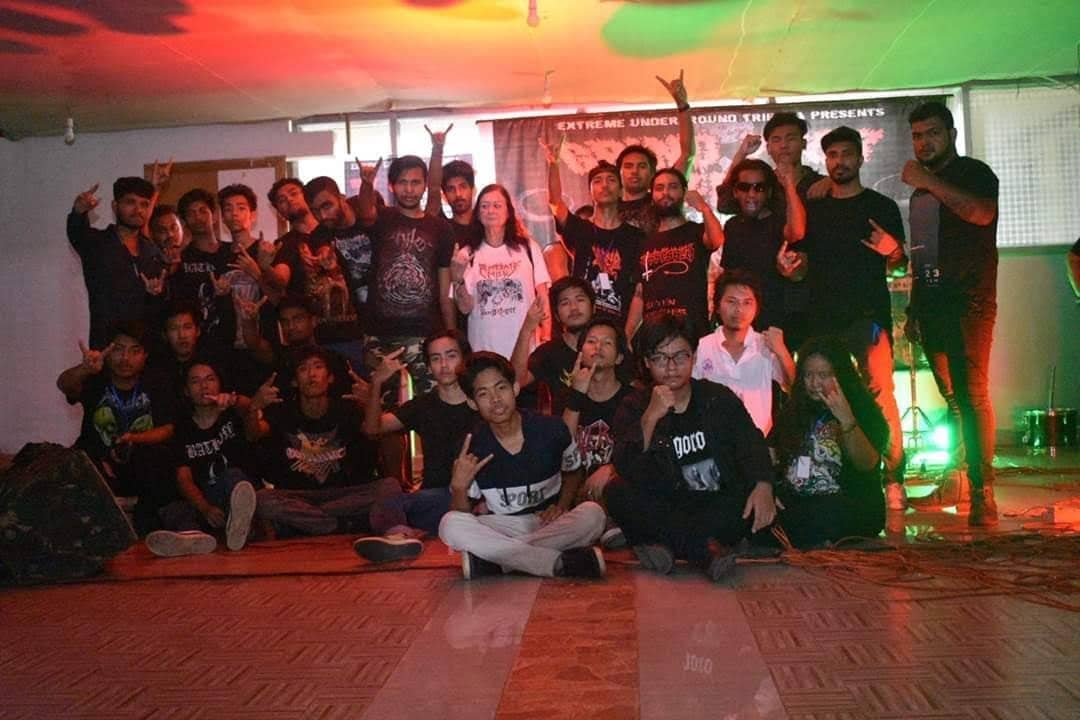