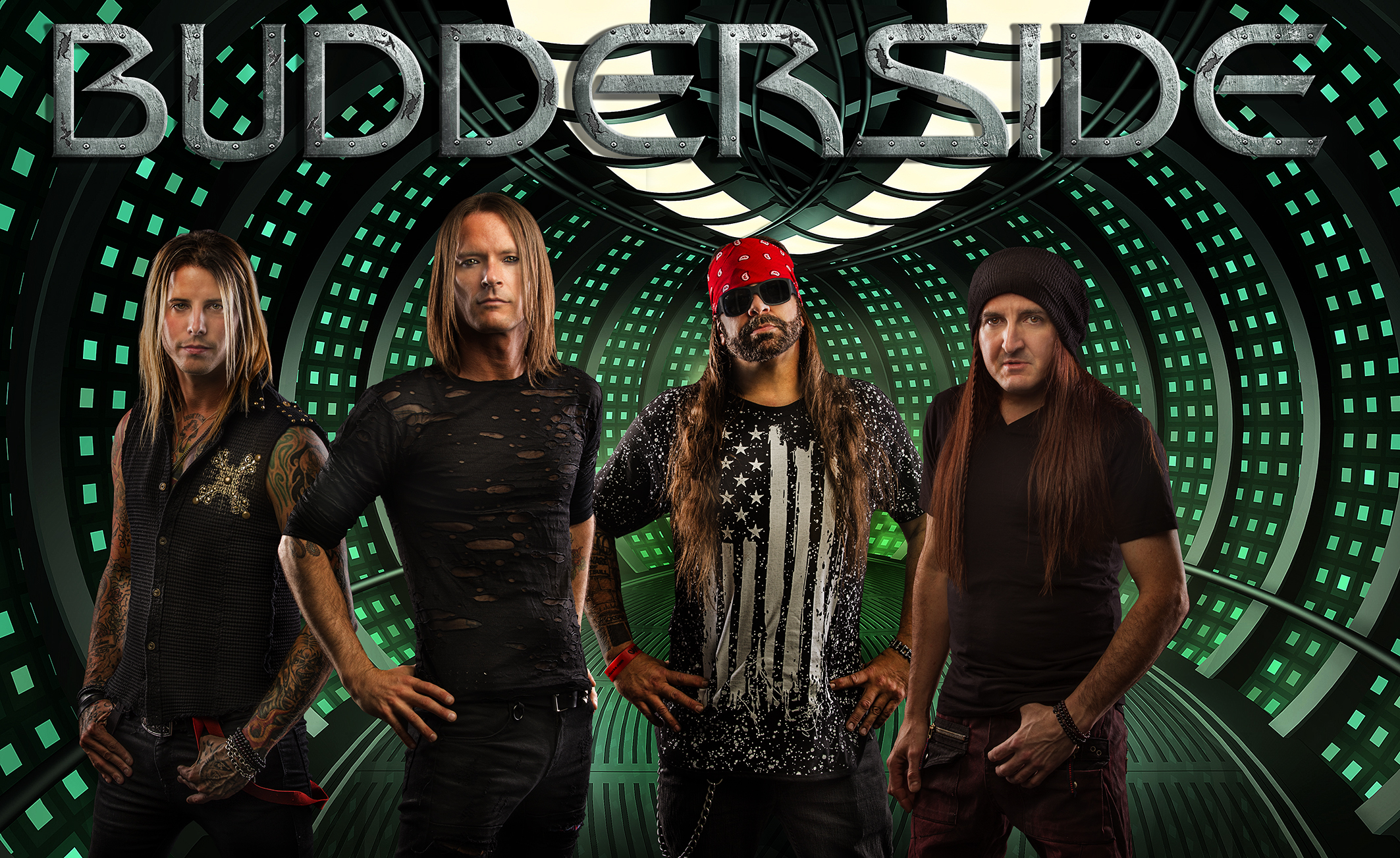 HBLS proudly presents the new official video by BUDDERSIDE called ‘Open Relationship’. The band’s debut album ‘Budderside’ is released on Motörhead Music/UDR and is produced by Lemmy’s son Paul Inder Kilmister. BUDDERSIDE singer/guitarist/song writer Patrick Stone gives some more information about the clip and while we were at it we took the opportunity to ask him some other questions as well. 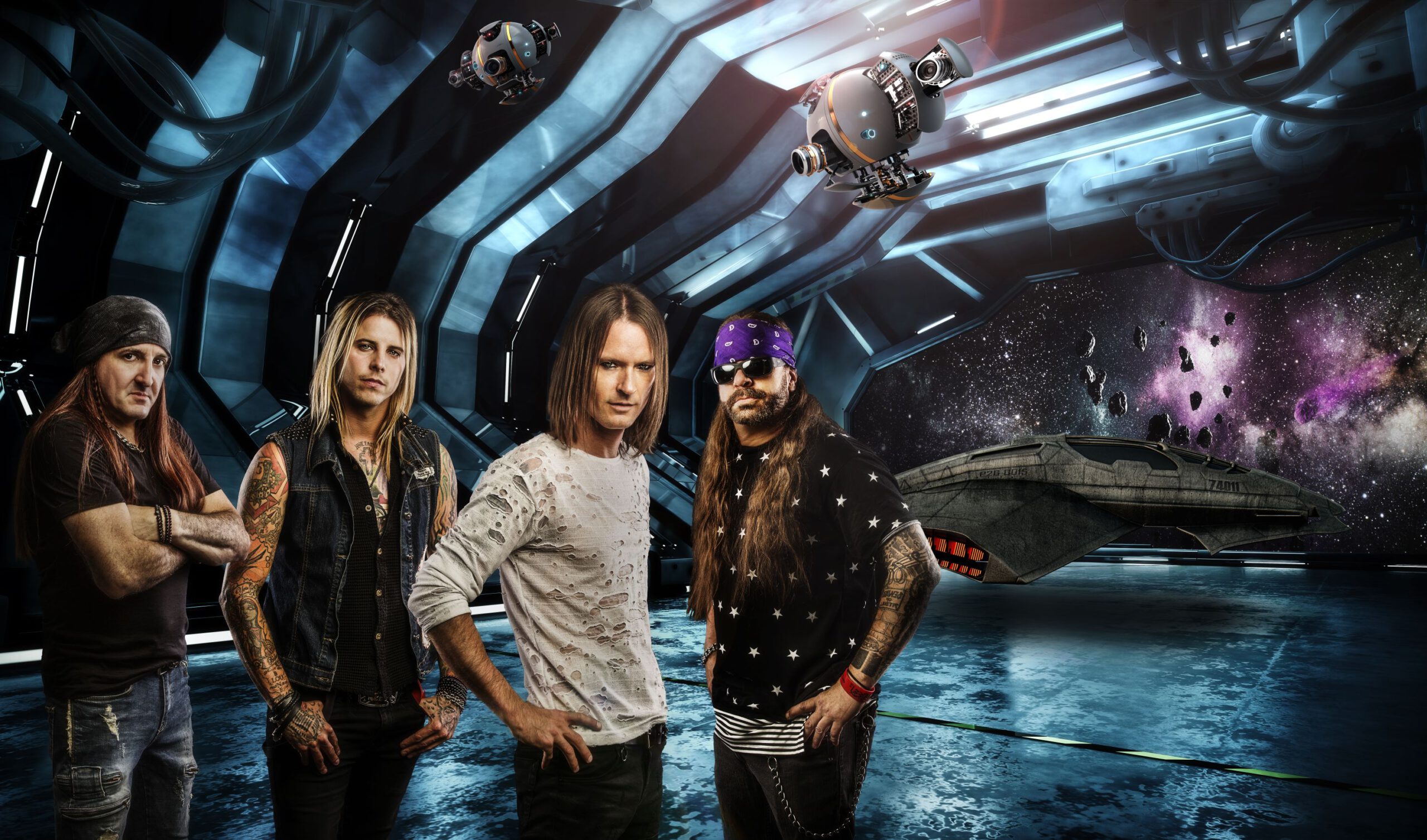 Can you tell in short the idea behind the video for ,,Open Relationship”?
,,It would be my pleasure. We wanted to focus more on the bands performance of the song while completely submerging ourselves in a Budderside-like world. Somewhere that really captures the look, sound and feel of the band. The video takes place on a world a lot like Mars. Like the band, the hard planet floor has been created on centuries of evolution, yet in discovering this new world you’ll need the pinnacle of technology to get you there, survive and thrive. The song’s lyrics are about devotion to another being that you must allow to be themselves or your attraction to them will destroy you. The raw determination to fulfil desire. The video sees us mesmerized by a libidinous alien, tempting us from beyond. It’s a CGI Masterpiece created by Erik Bishop.”

This is the second video and something completely different than the first one ,,Pain’’. Is that done to show the different sides of Budderside?
,,Well said! The video for our first single ,,Pain” was created to introduce the band to you in a fun way. Lots of pretty girls and a comedic theme. ,,Open Relationship” takes a completely different approach, yes. It’s not that the band “tries” to be different from one song to the next, it just happens that way. We’re not jumping on a band wagon or trying to fit in. We write songs, man. We don’t feel the same every day and we don’t feel we should cheat ourselves or our fans out of a song that may be different from the last, just because we think we’ve figured out some stupid formula. We’re not going to feed you the same shit every time. So, yes, we want you to experience a different “side” of Budderside every time. Cheap Trick seemed weird at first, Faith No More were different and the first of their kind. We love all walks of music and let that feed our songwriting, for sure. Just wait until the next one…. Ha Ha!”

Your debut will be released on Motörhead Music / UDR. How did you get in touch with them?
,,Fate. A miracle. All roads led Budderside here. We couldn’t be more different from Motörhead, at a first glance. But, if you compare us to Hip-Hop or Rap, we start looking a lot more alike. Lemmy was very close to me. We got high together, we wrote together, we traveled together, celebrated, rehabilitated and annihilated stage after stage around the world year after year. He encouraged us to be unique. He was. The same goes for Phil Campbell and the whole Motörhead family. The first step into their world was drugs. The second step was a job as a roadie. The third step was a real bond with Todd Singerman and a leap of faith. Todd and I were friends from the second we met and we are so thankful he kept an eye on us. Dear, dear friends of mine who pushed me and supported me every step of the way. It took a while for me to outgrow the party, but once I did there was an army waiting to make Budderside a force to be reckoned with. After we did the album, Todd set us up with some showcases for UDR. It was love at first sight and sound. It really feels like we just keep meeting more and more family members. We love these people and would die to make them and Lemmy proud.”

The cd was produced by Paul Inder Kilmister. Was that the idea from the start, how did you meet him and what was his input?
,,Todd made the introduction. There were a few heavy hitting producers and big studios in the mix to pick from, but after meeting Paul, he was the obvious choice. Again, fate, keeping it in the family. Paul had an instant connection to the songs. He could see our vision and I felt he had the insight to take it even further. He was able to lead the process without deviating from the bands integrity. He never tried to take over the music, you know what I mean? He, also, had a surprising amount of experience, being Lemmy’s son, to electronic music that I felt was necessary. The modern production sound of today had to flow organically with our four piece arrangements. An amazing songwriter/producer/musician named Big Swede played a huge part in the creation of our synth dimension as well, tracking psychotic amounts of brilliance into these songs. But, Paul had it all. He knew how Led Zeppelin did it, started there and then did everything Skrillex could, too. All this, violins, pianos, cellos and Rod Stewart’s brass section was a production that demanded the best. Paul is that.” 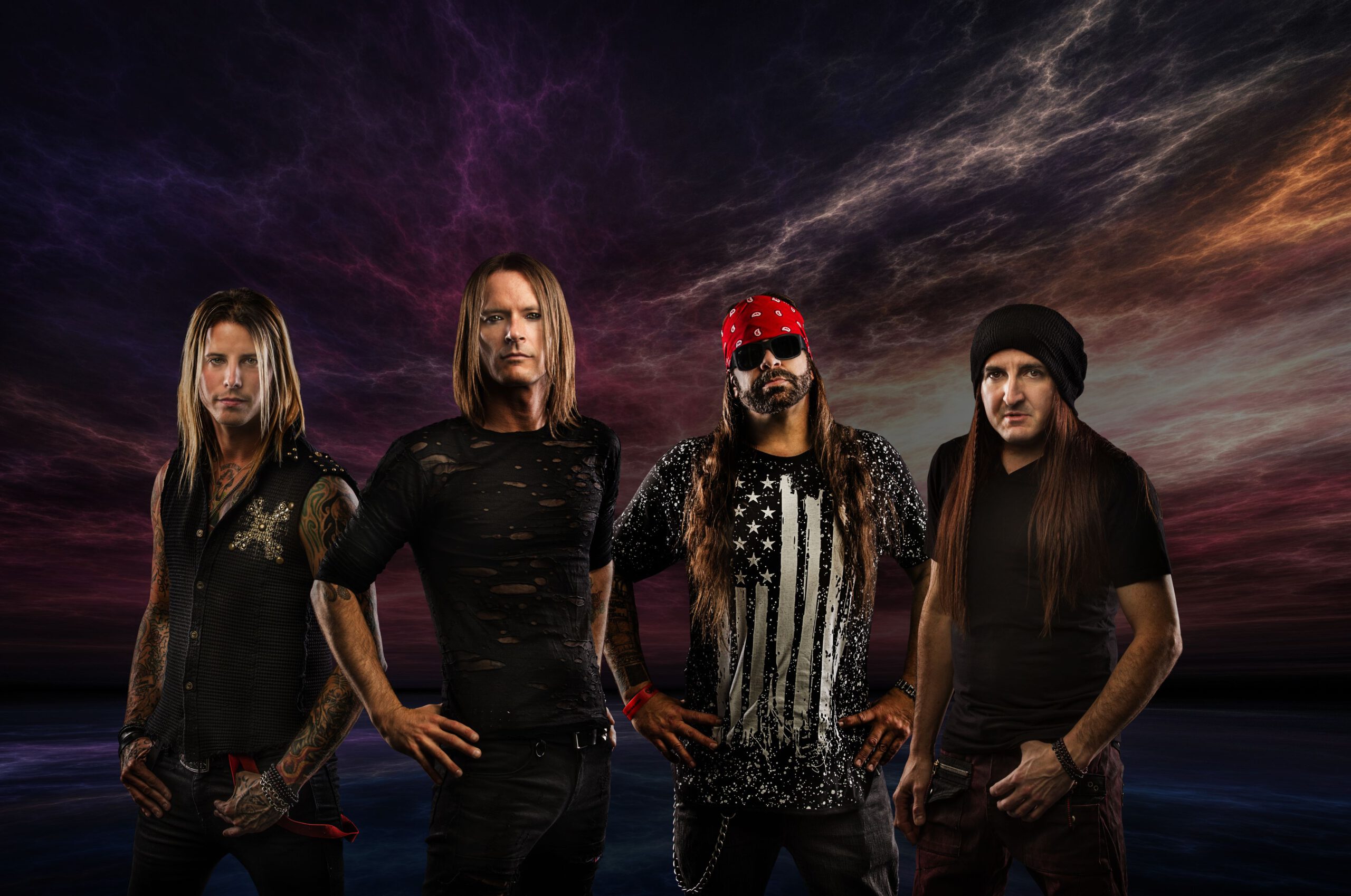 The album is very diverse (different styles), will that stay for future albums or will you go in a certain direction?
,,That’s a good question. It’s interesting to see what songs we play to what crowds. We’re learning very quickly what works. We have many songs written already to pick from, each, like these, different from the next. The band really enjoys the connection with the audience when we’re just pounding out upbeat song after upbeat song. As the audiences grow in numbers so will our arsenal of heavier, harder, faster songs. We’ve already been writing for the next album and the result has been a darker, deeper, up-tempo sound. We will still have our signature harmony and will remain unafraid of taking a quick turn into another dimension. We’re all about surprises. The next album will definitely get you and keep you on your toes.”

What are your expectations for the cd?
,,We’re not trying to replace your favorite groups. We don’t want you to think we’re better than your favorite groups. We just want a chance to be one of your favorite groups. We hope the world will take a moment to try something new. Play our music while you live your lives and maybe see that we’re like you in so many ways. Dying to connect. Doing everything we can to make the world better, by staying true to our hearts and killing ourselves to lift you up higher. That’s what we want. We want other people to love our music the way we love our music. We hope to travel the world sharing our message. We hope to make a name for ourselves. We know we can’t do it alone. We hope and pray for a major act to lift us up for the world to see on a high profile tour. We want to reach millions. Last, but not least, we want to continue to make our friends, family, fans, our team, our label, management and Lemmy very proud.”