WELCOME TO THE AMERICAN UNDERGROUND 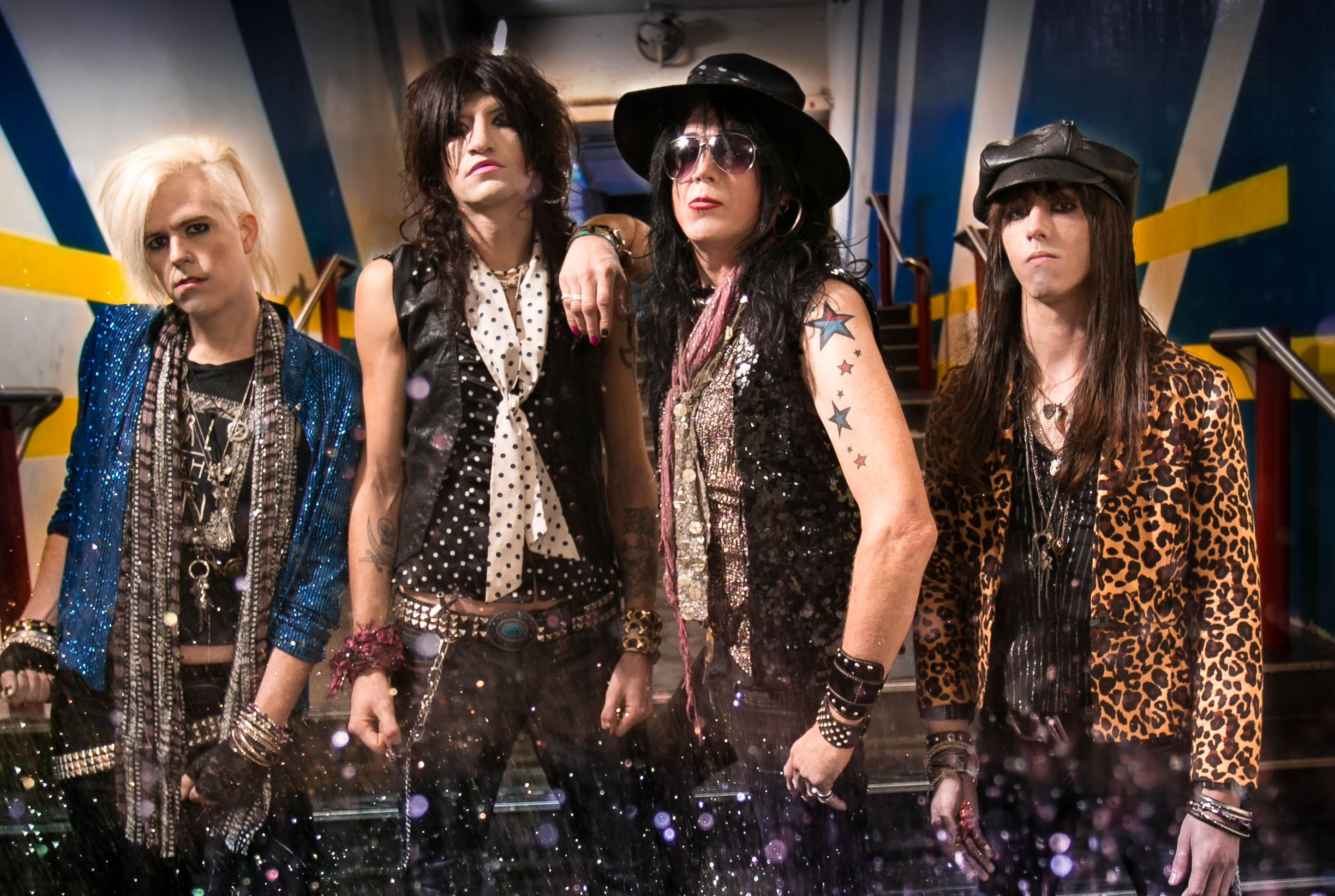 WELCOME TO THE AMERICAN UNDERGROUND

HeadBangersLifeStyle is proud to have Kickin’ Valentina’s bass player and specialist of the American underground music scene, Chris Taylor aboard to keep you updated about what’s happening there. His first contribution is about one of the key people in this underground scene: Lesli Sanders. Everyone knows that the glam rock heyday reigned from the mid 80’s to the early 90’s. Bands like Poison and Mötley Crüe were topping the charts and selling out arenas, while Faster Pussycat and LA Guns succeeded with top 40 albums and tours. Beyond the mainstream bands that were covered via MTV, FM radio, and magazines, subsequently there was an underground movement with a seedier glam image and punk influence. Bands of this subculture combined the sounds and attitude of the Sex Pistols & Ramones mixed with an over the top image spawned from the New York Dolls & Hanoi Rocks, consisting of caked on make-up, manic panic hair dye, ripped panty hose, and stiletto heels. They did it all while snorting lines off a mirror, picking girls out of line by the backstage dressing room door and a big middle finger in the air. While most bands portrayed rebellion in the media, some bands were actually living and breathing it. 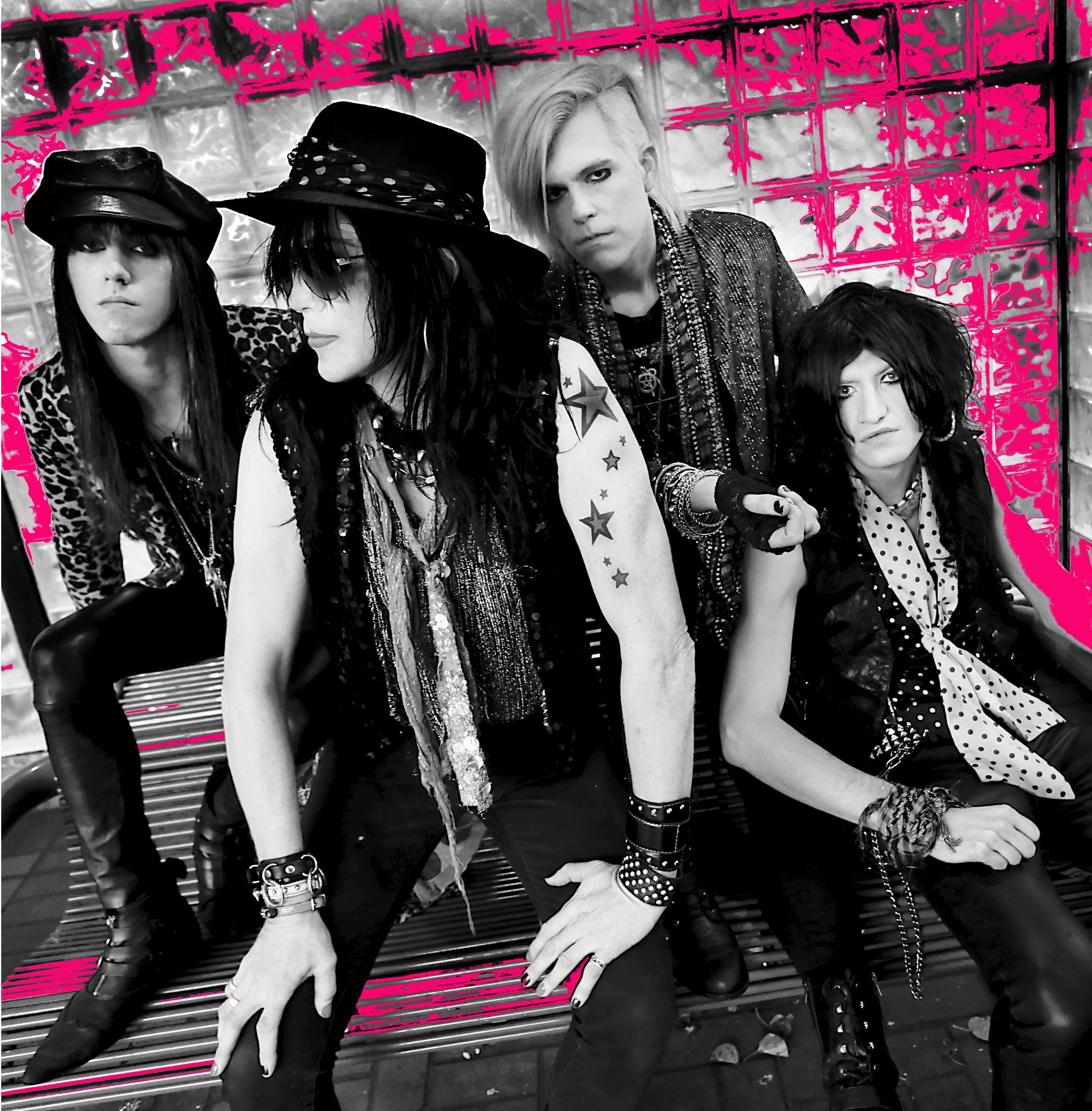 Even though the glam punk scene has it’s roots in the 70’s, by the mid-late 80’s we started seeing bands like the Zeros, Glamour Punks, Queeny Blast Pop and a handful of others selling out venues around Los Angeles. Although these bands never had any commercial success, they did develop extremely loyal fan bases. One of the key people from this underground scene was Lesli Sanders, whose new band Prophets of Addiction is quickly gaining attention and respect in the current rock scene. I recently spoke to Lesli about his new band, his new record deal, and also his newfound sobriety.

Lesli, always good to hear from you.  For those that may be new to Prophets of Addiction, tell us a little about the band… how long have you been around, and how did it all come together?
,,Well the band has been around since 2012 or something like that. I am not so good at keeping track of that sort of thing. I moved back home from Hollywood CA where I had lived for 18 years to do something, not musically, but to change my life. That change was to sober up, stop drinking and doing drugs. After successfully completing what I needed to do to feel that enough time had passed, I was ready, and the next logical step was to form a band. I had written well over 130 songs… about my troubles, depression, and bouts with drug abuse. These songs contained provided an escape for me, and now it was time to share them. Prophets Of Addition was born, the band became the new addiction and through this vessel I will explain myself.’’

Prophets of Addiction recently signed with Danish label Might Music/Target Group. How did the label discover you, and how do you think this will change the future of Prophets of Addiction?
,,The label is something I have felt we have needed for a while. I can only do so much, and it is a lot, however, I felt something more was needed. I began to reach out to some people about a label that would be suitable in todays music scene. A “team” of sorts to take the band to a new level. I had asked long time journalist and friend Ken Anthony for a suggestion, and I was in contact with the label, and everything has happened very quickly since.’’ 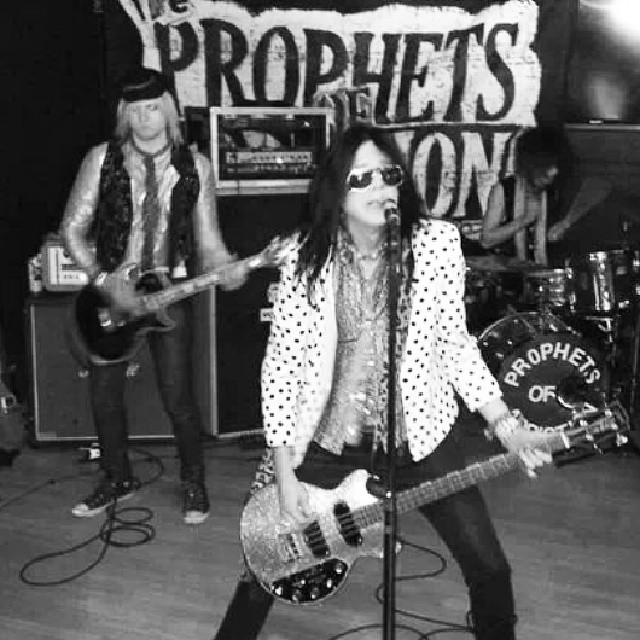 You have a new CD called ‘Reunite The Sinners’ coming out soon that was produced by the legendary Phil Soussan. Tell me a little about this CD, and what is the release date? How did you get involved working with Phil?
,,The new recording will be coming out April 16 worldwide. Phil actually handled the mixing and mastering duties on this one. Phil is a great guy, and a long time friend of mine. We have worked on many recording projects in the past, so why not do it again, it seems to work.’’

You have played with some cool bands over the years with great cult followings from Pretty Boy Floyd, Queeny Blast Pop, and Talks Cheap – to touring with guys likes Marky Ramone and Phil Lewis. I have to ask, how did you hook up with Marky and what was it like touring with him?
,,I don’t really remember how I hooked up with Marky, he needed a bass player, I talked to him on the phone and that was that. It was pretty cool hanging with him, really cool guy, and I mean he is a Ramone. I was also able to become friends with Dee Dee prior to this, and actually lived in the same building where Dee Dee lived and passed away.

Here is a funny story… so when Marky had came out to Hollywood for rehearsals, and we had finished, and were ready to head out on the tour, we had to stop by my place. At this point Marky and Dee Dee hadn’t talked in years, so Marky says to me, “Park down the street, I don’t want to run into Dee Dee because it would be awkward.” So of course I said OK. I ran up to get my stuff from my apartment so we could head out on the tour. As I walked down the street back towards the van there is someone leaning into the window, well Dee Dee just happened to be walking down the sidewalk and discovered Marky sitting there…HAHA!  So there I was just listening to their conversation, like is this real, here is Dee Dee and Marky Ramone having a conversation in my van. All this was happening while nobody even noticed, what an experience.’’

Some of the bands you have played for have been pretty over-the-top image wise. As a kid, what was it that attracted you to the glam image, and then wanting to combine that look with a more punk rock sound? Back when you started doing this, glam rock and punk rock were two different worlds, and you and a handful of other bands like the Zeros and the Glamour Punks smashed the two worlds together.
,,I am not really sure why it happened, the thing was it was never planned. It just happened. I guess I like what both elements bring to the stage.’’ 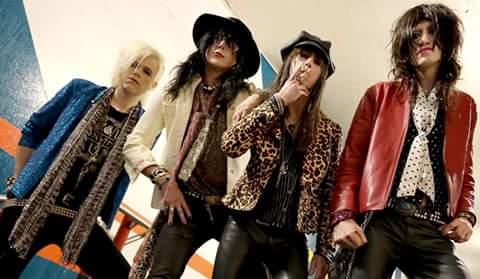 When the pop punk scene exploded in the late 90’s with bands like Blink 182, New Found Glory and AFI,  what did you think? Sound wise, these bands were not far off from what you had been doing several years before. Only difference was the image.
,,At that time I thought it was great of course. We (Queeny Blast Pop) were approached by almost every label there was. Change your name, change your image and this is how its gonna work, so by this time, hesitant as I was, I said fuck it. We changed the name to Distractions, got a record deal, recorded a new CD with Bill Stevenson (Black Flag, Descendents) and Stephan Edgerton (Descendents) producing it. We were ready to take over the world, one problem, our manager fucked us. The label all of a sudden had some sort of problem, and we were sitting there saying what the fuck do we do now. That lead to fighting like crazy and us turning on each other, and it was over, the end.’’

You guys are some of the biggest road dogs that I know. You live and breathe Rock ‘N Roll, and I have a lot of respect for that. There are a lot of challenges for bands nowadays that I don’t think the average fan realizes. What do you think are some of the biggest hurdles bands have to jump in order to tour and get their music out today?
,,I just think it is like this, if you want to do it, do it. Life is full of obstacles, if you want to do something you just have to “MAKE” it happen, don’t take no for an answer, and work your ass off.’’

It’s no secret that you had substance abuse problems in the past, hence the name Prophets of Addiction. Congratulations on getting sober. How long have you been sober? Do you find it difficult sometimes being in a band and being around people drinking and partying, and you can’t partake?
,,I have been sober like 7 years, I do not at this point find it hard to be around it. When I decided to quit, I myself was done. I did it because I wanted to, not to fool anyone, not because of pressure, although there was a lot. And an annoying drunk is still an annoying drunk, so yes, that is annoying to be around even if I was wasted HAHA.’’ 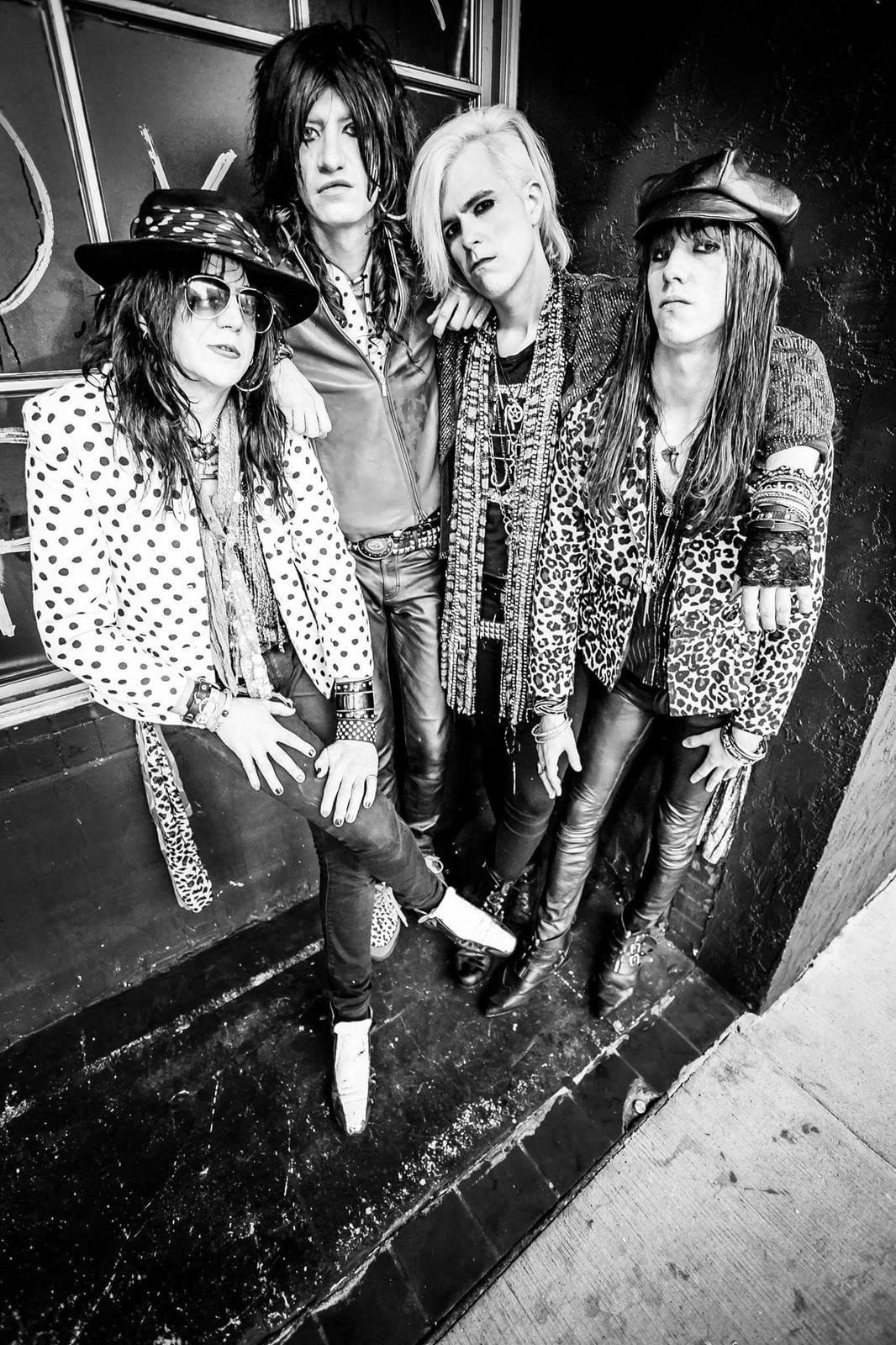 I ask this question to musicians in every interview because I think it’s important for bands to support each other. What are some new bands out there that you think everyone needs to check out?
,,I would just say try to check out as much as you can, don’t really want to get into naming names or I would be here all day. And who am I to say to check out, I mean I think every band is good, because this is not math, there is no right and wrong. This is self expression, as shitty as it may sound, to one that is not what this is about.’’

Anything else you want to add and tell the fans about? Thanks for taking the time to do this interview.
,,THANKS, be sure to come hangout with us at a show near you. You want us to play near you, help out. Keep the live performance of music happening. Please let us know any suggestions…PEACE.’’