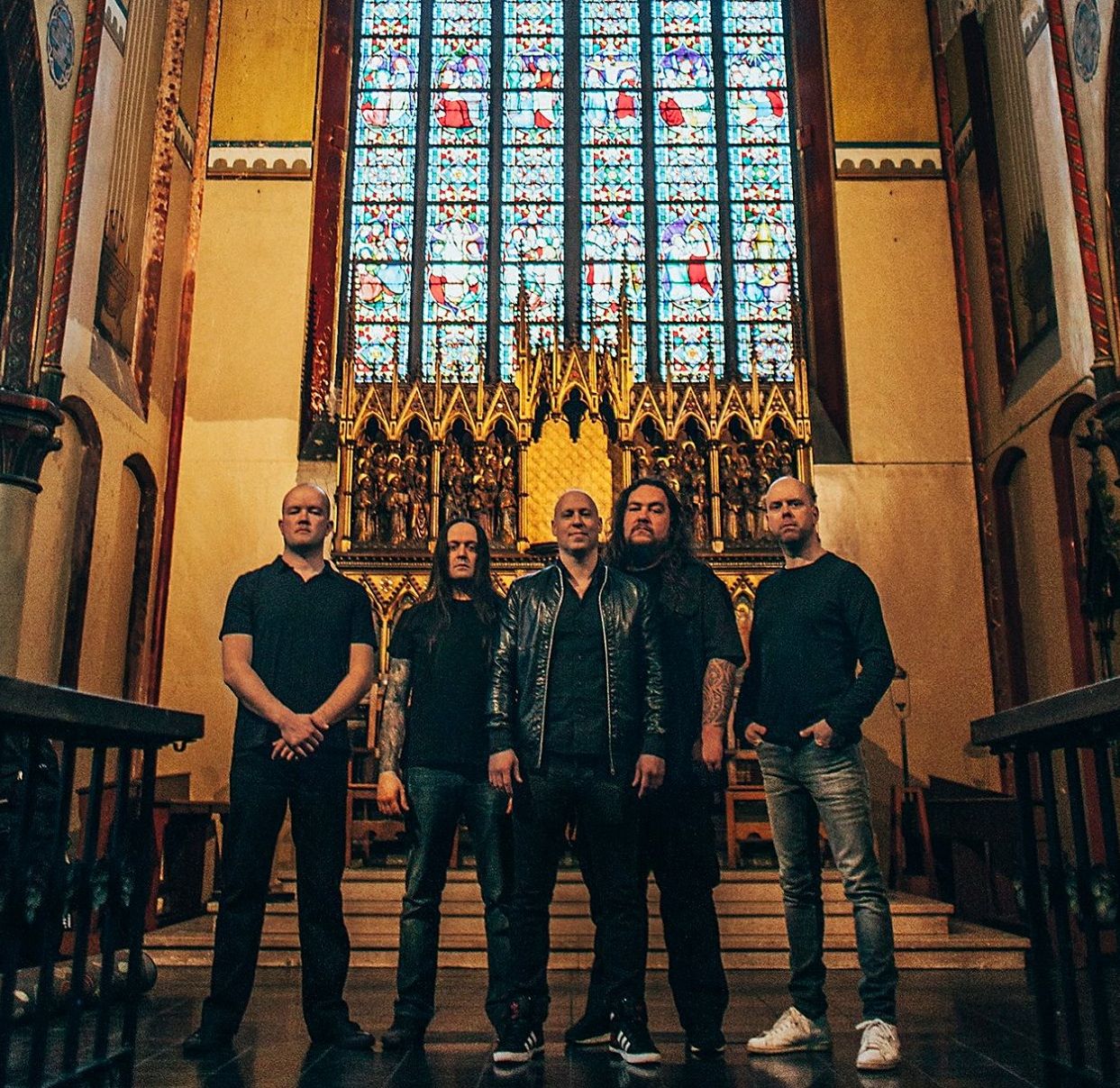 Respected by their peers

Belgian speed metal band After All is something like an institute in its own country. They started thirty plus years ago, made nine albums, toured with big names as Anthrax, King Diamond, Sacred Reich but never really became big themselves. Their latest album ‘Waves Of Annihilation’ could change that because it is the best they made so far. Guitarist and main composer Dries Van Damme is proud of the album and the fact that the band is still around after all this time. What was your plan with After All when you started the band in 1990?
,,That’s a nice question to start with but there has never been a real plan. We, Christophe Depree and me, know each other from high school in the mid-eighties. He and I turned out to be the only metal lovers so I guess we were destined to become friends. We listened to music, exchanged tapes and albums and somehow got the idea that we’d love to do it ourselves. The first guitars came in and we started at age fifteen. We were fans of speed/thrash metal starting with Metallica, Slayer, Overkill, Agent Steel, Anthrax and it was a great time to find new music. We liked our thrash fresh and the old rockers didn’t understand, it was for the new generation. It took us at least two years to become decent players. It was not impressive but we loved it. Later we realized we needed a band, later on we wanted to play a show, maybe make a demo and we just did it. We just went step by step without a real plan. It was all about having a good time and now we released our ninth album, did a lot of tours and made many dreams come true so we haven’t done so bad.’’
Who were your idols when you started?
,,It started with Iron Maiden. When I was around twelve years old I was given a Philips portable turntable, which is now vintage, and a Philips radio cassette player. I listened to the radio and I recorded new music from it. I had seen photos of Mercyful Fate, Motörhead and Twisted Sister in magazines but didn’t know their music. By chance I heard it on the radio and I was so impressed I recorded it. I still remember that moment, it changed my life. I didn’t know anybody with whom I could talk about it until I met Christophe a few years later at school. Nowadays a twelve year old can go on YouTube and find everything but he doesn’t find anything because it’s just too much, if you know what I mean. I was lucky enough to find a local radioshow that played metal and made the first selection for me. I made a rockshow on Belgian radio station ‘Studio Brussel’ for ten years with the same idea: let people know what’s out there.’’
Your previous album ‘Dawn The Enforcer’ was After All’s bestselling album so far. That set the bar high for the new album.
,,That was in the back of our minds and it might have been an issue if we were on the same label but things happened and we lost the deal. We saw it as a new chance with nobody pushing us. The result took us four years, which was a bit too long but there was no rush and we decided to do it our way. It could have gone two ways, either nothing happened or we got the best out of ourselves and that’s what happened. The only rule we had was there were no rules, just like thirty years ago and it worked.’’ 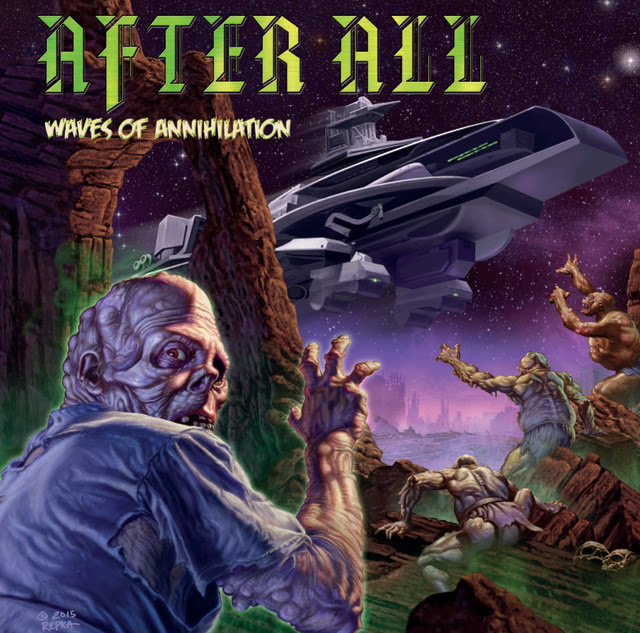 Did you take a different approach this time?
,,Totally, we wanted to avoid long writing and studio sessions. You usually record ten or twelve songs in one session. When we had three or four songs ready we recorded them in a weekend and when we had another three we went in again so that took us one and a half year in total. In between we did the mixing with Dan Swanö. There was less stress because when something was ready we booked a weekend and most of the guitar and bass parts were recorded at home anyway. Only for the drums and vocals we needed a nice room.’’
What are the ingredients for a good song?
,,That’s not so easy to say. When everything fits, just like small details. I don’t think there is such a thing as a magical formula. You don’t have a few riffs and say ‘let’s make a great song’, it’s a bit more difficult than that. The cool part is that you do it with others. I make something at home, bring it in for the others to hear. Then there’s two seconds in which the decision is made, either it works or it doesn’t. At home something can sound super but in rehearsal it can totally suck…and the other way around. The nicest thing is that you’re making something out of nothing.’’
Together with the other guitarist Christophe Depree you are the original members of After All. What makes you two so strong as a team?
,,Difficult to say, we are good friends also outside of the band. There simply is a good bond, we give each other space when playing and writing. Most difficult in a band are usually the ego’s but we do give each other space because we know that the end result will be the winner. Part of the key is there’s no jealousy like in a lot of other bands.’’
Is there something like a typical After All style?
,,Well, our style is not carved in stone. We made nine albums and the first and the ninth differ night and day but if you would listen to them one after another you would be able to follow the story. Every album sounds a bit different. When you replace your singer that changes the sound, same with the drummer, everybody has his own style. Our last drummer Kevin sounded more like Paul Bostaph, the new drummer Bert Guillemont has a Dave Lombardo feel. Two great drummers but different although maybe not so much of a difference for the listener as it is for us.’’ 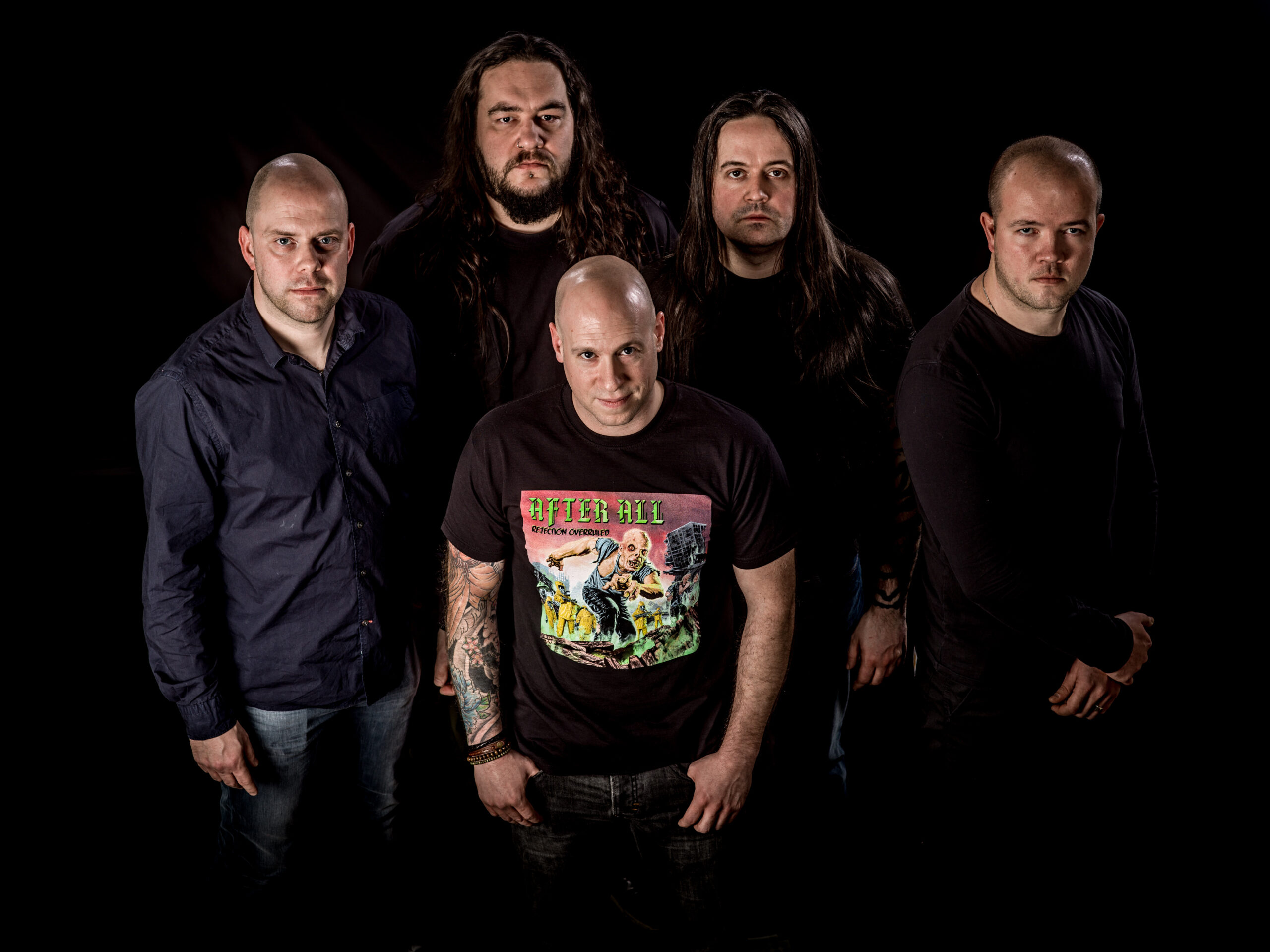 Why is this line-up the ultimate After All line-up?
,,Every line-up is the ultimate one as long as it lasts, I have no illusions regarding that. At the moment I am very happy, everybody is on the same wave length regarding music and as a person. When we were looking for a new drummer he had to fit two criteria: the most important being a cool human being and secondly being able to drum.’’
What do you consider After All’s biggest achievement so far?
,,That we’re still around and make music that we’re proud of. We had no plan but after the first album that did okay we wanted to write an oeuvre and not be a one day fly. I’m proud of the recognition we get from the scene where we looked up to as teenagers. We’ve played with Anthrax, Metal Church, Fear Factory and if those bands respect you for how you manage your band that makes me proud. That mutual respect, even for a small band from Belgium, is great.’’
—
Check out After All on Facebook and their website