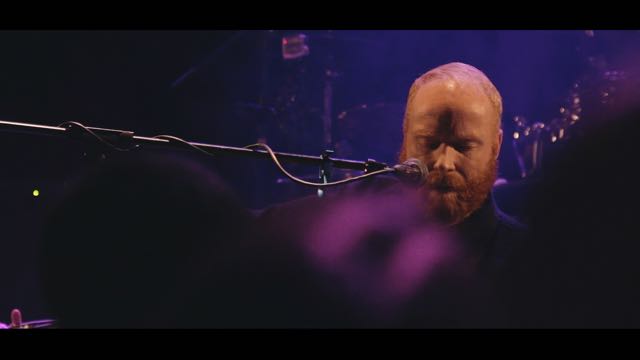 This year UK singer, multi instrumentalist and songwriter Mick Moss celebrates the 20th anniversary of his creative outlet Antimatter. It all started with the release of the magnificent debut `Saviour’ and although besides Mick there were different musicians involved at the time, it paved the way for a very special, unique and long lasting career. With every album Antimatter display touching and intense sounding (rock) music, clinging into dark moods, hope and despair, but with the most recent studio album `Black Market Enlightenment’ (2018), Mick took the listener to his most personal state of mind so far. It is a fantastic album that can be considered as a true masterpiece. But apparently Mick had more aces up his sleeve, because Antimatter recently released the suburb sounding live CD/DVD `An Epitaph’, featuring a once in a live time Antimatter show in Kiev with a string quartet. HeadBangers LifeStyle’s Liselotte `Lilo’ Hegt decided it was time for an update interview with Mick Moss.

,,There hasn’t been an Antimatter gig like this before or after, and I managed to get it captured.”-Mick Moss 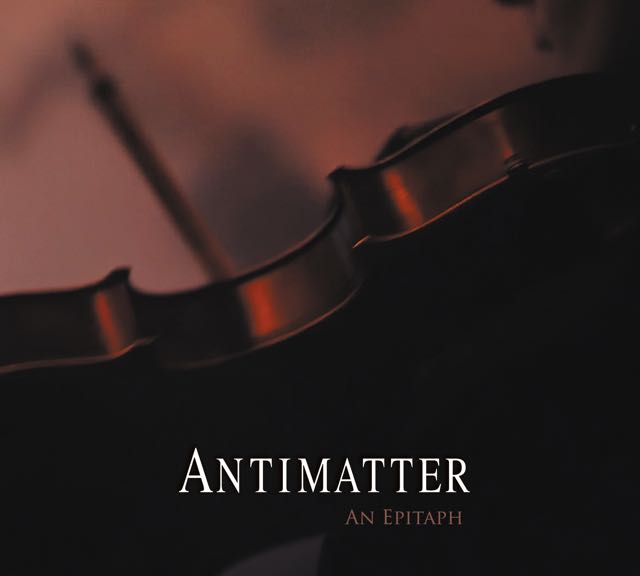 What excites you the most about the release of your live CD/DVD `An Epitaph’?
,,A few things! Firstly, it’s the 10th release on my record label ‘Music In Stone’, which was shocking to realise. Then there’s the fact that this was a one-off show, totally unique, there hasn’t been an Antimatter gig like this before or after, and I managed to get it captured. Also its managed to come just a year after the release of the last studio album ‘Black Market Enlightenment’… As I’m running everything now, the timeframe of that was reassuring in the sense that I’m managing to keep productivity high without actually folding. I’ll fold soon, I always do, eventually. Burnout will come and bite me on the arse; I’m a workaholic… But for the time being all is good!”

Why did it take you 3 years to finally release it?
,,Well, for the longest time I actually thought it would never get released. The show was recorded and filmed and then all went quiet and my emails weren’t being answered. I started to lose hope, it was a time of despair. I then began work on ‘Black Market Enlightenment’, which was a massive project, an album and a film, so I was consumed by that. Then, 18 months after ‘An Epitaph’ was recorded, I finally got an email, and then silence again. It was basically like that. It was a tough process emotionally. Eventually I managed to take collection of a multitrack mix and then set about remixing it from my own studio in Liverpool, 2 years down the line. It became a labour of love. Once the audio mix was done, Yuri (who was in charge of the video) worked really quickly to deliver the visual product. It’s an utter relief to get it released.”

,,I’d always wanted to play a show with strings, so this was a bucket list moment.”-Mick Moss

You were in the middle of the `The Judas Tour’ when the opportunity of doing a show in Kiev, Ukraine, with a string quartet came along. Can you recall how it felt when you got that question?
,,It was one of those things where you just immediately say ‘yes’, like there was no ‘shall I or shan’t I?’ moment, even for a second. Usually I’m very logical in my consideration of things, I weigh stuff up carefully (for the most part), but this was just YES. Like, ‘would you like £1,000,000?’ or ‘would you like to travel back in time and watch the gig of your choice from your dead heroes’ YES YES YES YES. That kind of thing. I’d always wanted to play a show with strings, so this was a bucket list moment.” 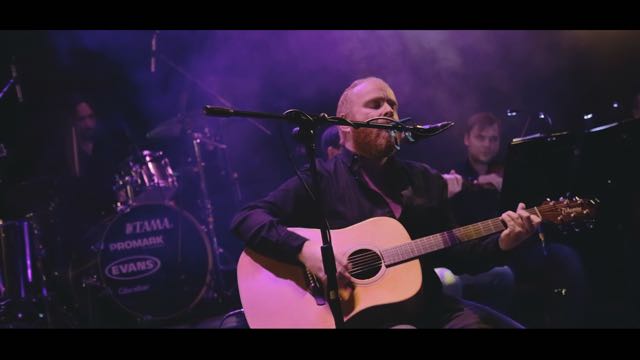 When you said yes, what kind of a show and vibe/atmosphere did you want to offer the fans with that opportunity?
,,I knew that I wanted to delve into the acoustic side of things, and approach it that way. Rather than having the electric band with the quartet, and all the banging drums and distortion and power, and the strings trying to play over that, I wanted to go into the side of Antimatter that has always been there, the ,,Weight Of The World”, ,,Conspire”, ,,Fighting For A Lost Cause” side. And then on top of that, if I could manage to adapt one or two of the heavier songs into that format then that was a total bonus. ,,Stillborn Empires” turned out great.”

What did it take to make it all happen?
,,I spent 6 weeks digitally scoring the songs for string quartet, and that was great because some of those songs I originally arranged back in 2004, so I was able to add more elaborate parts… parts I was too naive and inexperienced to add back in the day. I’m a bit more musically savvy now. Then I sent the score off to Ukraine to have it transcribed to a traditional paper score. We rehearsed in Germany for a few days before going over to Kiev, where I learned that Anatoily (the viola player who had transcribed my digital score) had added some extra flourishes himself to the arrangement, which was just amazing.”

Was it the first time you worked with a string quartet on stage? And how was the experience for you, especially on an emotional level?
,,Yeah, a totally new experience, but to be honest I was aware of the quartet for the first song and then after that I just disappeared into myself to that place where I go when I’m performing, and everything becomes a blur. It wasn’t until I heard the multitrack recording 18 months later that I realised exactly what it all sounded like from start to finish. Very uplifting.” 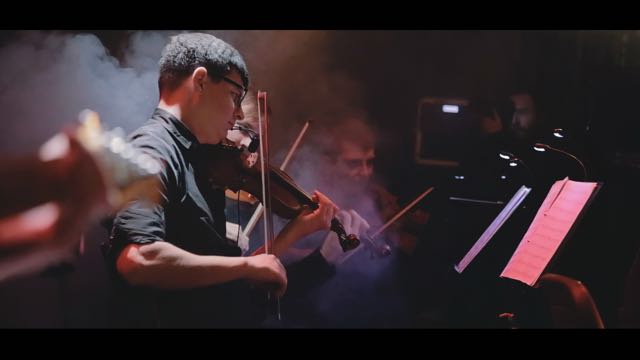 Did working with a string quartet also give you a new, maybe refreshing perspective on your songs?
,,It did, actually, because some of those songs are so old that they’d fell out of my psyche a bit. ,,Legions” I hadn’t played for years, I’d kinda let that song slip. And then there we are playing it with a totally refreshing slant on the string arrangements. So there was definitely a second life for some of those songs.”

,,I’m a child of the 80s, that was my music, the music that formed a big part of the writer I am now.”-Mick Moss

How did you select the songs for this show? And obvious there is just one song from the debut featured.
,,Straight off the bat it was obvious that a lot of my material from ‘Planetary Confinement’ would feature, as well as the more orchestral tracks from the then newly released ‘The Judas Table’. I’ve got a tonne of songs that were recorded with violins. It was obvious, really, there were no tough choices on there.”

You also played ,,The Power Of Love”, a cover from Frankie Goes To Hollywood. What made you do so? And what kind of version did you want to make of it?
,,,The Power Of Love” is one of my all-time desert island songs, and I’ve been playing my version of it since 2003. It was one of those easy decisions… ”Ooh yeah, that one will sound GREAT with violins!” I’m a child of the 80s, that was my music, the music that formed a big part of the writer I am now. A lot of 80s synthpop is darker and more artistic that people actually give it credit for.” 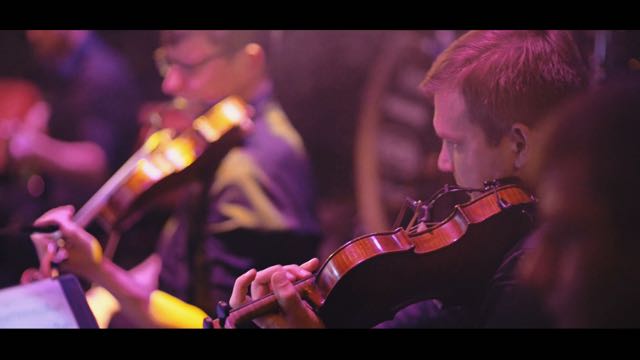 The DVD contains the extra track ,,Fighting For A Lost Cause”, why is this song not on the CD?
,,Time limitations! The length of an audio disc is shorter than what is possible on a DVD disc. That being said, the audio disc is still around 76 minutes long, which, for an album, is quite a lot, so it’s already halfway between an old-school single and double album length. ,,Fighting For A Lost Cause” was the encore, so it seemed logical to leave that one off the CD, as the song before it (,,Legions”, which ends the audio CD) is very climactic, and ends with us leaving the stage, so there’s a kind of natural end there.”

Is `An Epitaph’ a limited edition release? And where can people buy/order it?
,,You can still get it at the official site of Antimatter (here). It’s not planned as a limited release per-se, but I’m running my own label now, and as I bring new releases onto the catalogue, inevitably the older releases will fall out of print, so  …”

What is next for Antimatter?
,,Well, 2020 is the 20th anniversary so it’s time to get back on the road and start celebrating the entire discography in a series of shows. First up in April there’ll be an acoustic tour where I’ll be stripping everything back to basics and letting the vocals shine through. Then in September I’ll turn everything on its head and hit out with an electric tour. Both tours will have radically different setlists and also be completely different to what we’ve been playing over the last few years, so this is a really exciting period, albeit a busy one. Needless to say, each tour will cover the entire history of Antimatter from the first album through to the most recent. You can keep up with the dates by subscribing to the Antimatter Facebook page (here) or visiting the website (here). And between all that rehearsing and touring, if I can start the demos/pre-production for the next album, that’ll be a bonus! Also, me and Luis are talking about the next Sleeping Pulse album. It’s a project I’m totally in love with, and a follow-up to the debut is long, long overdue.”