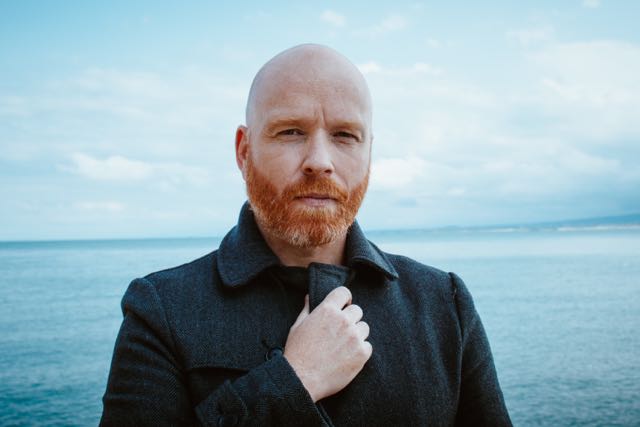 The origin of the melancholic, progressive rock band Antimatter goes back to the late 90s, when Anathema bass player Duncan Patterson and singer, songwriter Mick Moss joined forces together in 1998 for a new project they called Antimatter. Their tremendous creativitey resulted in beautiful, intriguing and outstanding songs, but after releasing three fantastic albums [`Saviour’,`Lights Out’ and `Planetary Confinement’] both musicians decided to follow their own musical path. Patterson formed Íon and Moss continued under the banner Antimatter though, but now using the project as his own personal outlet, which resulted in the excellent albums `Leaving Eden’, `Fear Of A Unique Identity’ and `The Judas Table’. Moss, who faced a bunch of personal demons over the years, recently made some drastic decisions and therefor took quite a jump while making his new album `Black Market Enlightenment’. Not only did he analyze a very dark periode in his life, the multi-instrumentalist and singer also started creatively from scratch and above all decided going DIY [Do It Yourself] when it was time to release the album. After hearing the enchanting and impressive endresult of `Black Market Enlightenment’ HeadBangers LifeStyle contacted Mick to talk about the ins and outs of `Black Market Enlightenment’.

In a nutshell, what are you offering the fans with `Black Market Enlightenment?
,,This 7th Antimatter album takes a long, hard look into the period of my life from 1991-1996, a period which started with me seeing certain substances as being here specifically for spiritual enlightenment, peaked with me developing an addiction, and ended with me being diagnosed with psychosis, having daily panic attacks, suffering from derealisation, agoraphobia, chronic paranoia… you know, typical enlightenment stuff.’’

What are you getting off your chest lyric-wise?
,,I went the extra mile on the lyrics, not that I don’t usually, I do. But this time I just went all-in. I spent months writing basically a thesis on what I wanted to say, what angles I wanted to attack the subject from. I’ve never done that before, usually I just start on the lyrics and build things in my head, but `Black Market Enlightenment’ saw me filling up notepads before I took pen to paper lyrically. It was a really intense way of working, but the result is enormous. The concept is watertight. I’m really proud of what I managed to get out here. Especially the albums closing song, ,,Liquid Light’’, which shines a light onto how the spokespeople of the ’66/’67 acid scene suddenly went quiet on the subject a few years later, yet never had the balls to come out publicly and say ”you know kids, maybe our message was a bit naive and irresposible”…. ‘’

How did you handle the writing process this time, and how did that experience feel?
,,I decided very early on that I would not reach into my archive of unreleased songs whatsoever (something I haven’t done since 2003’s `Lights Out’), thus forcing myself to create an entirely new work from a blank canvas. I also decided that I would try and write away from the acoustic guitar as much as possible in order to draw something new out of myself. After that, it was just, get free. Get free. Let the music come and let it be what it wants to be. Let the songs with the strongest identities float up to the top, regardless of what style of music they are.’’

Was it scary or a great relief to do things differently, to break a certain routine?
,,It was amazing, an amazing feeling. For want of a better example, it was like getting a new lover… where you’re doing basically the same things, but it all feels brand new, revitalised, it draws something out of you, a different version of yourself. Heavy tracks like ,,Between The Atoms’’ or the prog-pop of ,,This Is Not Utopia’’ would never have come into the world if I’d been sat there with just my acoustc guitar.’’ Did you discover new things about yourself as a musician, singer and songwriter, things you didn’t know you were capable of?
,,Yeah, I guess I learned that I really can push myself, I mean really, really push myself. This time not only did I make the most progressive album of my career, but I made a 50 minute documentary, `Finding Enlightenment’, at the same time. It was ambitious, and I did have some serious mental issues on the way, but I came out of the other side with both projects completed, and completed well. I also learned that musically I can reach anywhere I want to go. This was the freest I’ve ever felt whilst composing.’’

Are you afraid of facing a writers block one day in your life, or doesn’t that bother you at all?
,,I’m really burned out at the moment. I was already at a burnout point sometime in August… you can see in the `Finding Enlightenment’ documentary (on the 2-disc edition of the album) there is a scene where we cut from the peak of finishing the gig at Night Of The Prog Festival, and as the audience cheer goes on and on, the visual is moved to shots of me with my head in a mess at my home studio, recording vocal takes, and the pained expression on my face is easy to read. Its a nice juxtaposition of the highs and lows of this work. But even now, in this state, I’ve got over 25 unreleased songs, and the urge to pick up my guitar and start writing again. I honestly dont think I’ll ever hit a real block. Everytime I’ve thought I was in the middle of a writers block, I’ve ended up writing a new album. No I’m not worried.’’

In several songs we can hear flute, saxophone and even a Qamancha, which is not such a common instrument to use in Western music. How did these instruments cross your path, how did they inspire you and in what way are they important for the sound of the album?
,,For years I’ve been promising myself that I would have saxophone on an album. It all started with `Leaving Eden’, I planned to have a sax and then I ran out of time… and the same thing happened album after album. It almost happened again this time but I forced myself to make the effort to find somebody before the clock struck midnight. Paul Thomas was amazing, he just came in and smashed it. You can tell he’s been playing for decades. As for the qamancha, I was on my way to Armenia to film the promo video to ,,The Third Arm’’ and I asked Andre Simonian (The Beautified Project) if he could find me a session musician who played qamancha. At that point I didn’t even know what the instrument was called, I’d just heard in on movie soundtracks like `Gladiator’ and `The Last Temptation Of Christ’. Vardan Baghdasaryan did an amazing job. Same thing with Julie Rodaway on the flute. I just wanted this album to stand apart from the rest of the discography, and I felt that the whole lead-guitar break, that’s been done to death since `Eden…’ and I just wanted to hear something different this time. I made the right choice, totally.’’ 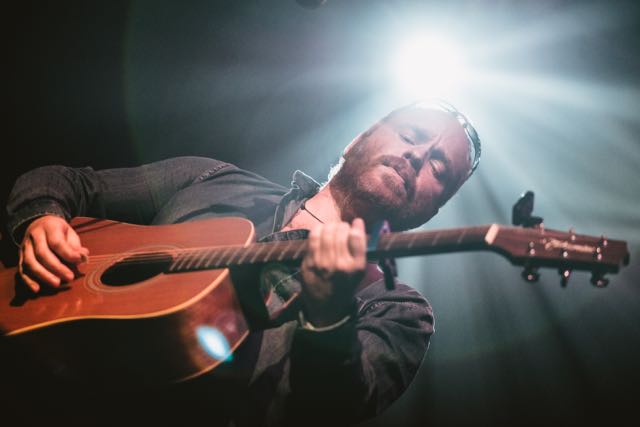 To me the album shows more prog and rock influences, which give the songs more energy and dynamics, and it sounds more in your face maybe. Did you want to add more balls to the music?
,,Naturally with me having an electric guitar in my hands for most of the time during the writing process, there were gonna be more heavy passages. But the heavy thing has been there since the start with me, if you take a look at the first album, songs like ,,The Last Laugh’’, ,,Saviour’’, those songs I wrote 20 years ago, so I’ve always had the tendency to kick off with heavy guitars. As for the progressive element, again, that’s always been there with me, take a listen to the closing seciton of ,,Everything You Know Is Wrong’’ from the second album. These elements have always been in me, and they pop up in varying degrees from album to album. It’s just that this particular album saw an abundance of both progressive and heavy tendencies.’’

,,But at some point during that day, inevitably, you fuck up …’’-Mick Moss

Do you think you can reach a new audience with the album as well?
,,It would be nice to think that I’m reaching new people with every release, even if it is in small numbers. I’ve fully embraced Spotify now, and the other digital platforms. At first I was reluctant to say the least, but I realised that for `Black Market…’, I just really want people to hear the music, regardless of how they hear it. CD, YouTube, Spotify, torrent, whatever.’’

The video for the track ,,The Third Arm’’ is confronting. What is your personal view on this video?
,,I wanted to show something that was symbolic of making the same mistake every single day, day in day out, which is basically an addicts cycle. When you’re compulsively banging a substance, whatever that substace may be, heroin, alcohol, weed, whatever, day in day out, you’re already aware that you have a problem and that you need to change (unless you’re a total narcissist). Each day starts with a blank canvas, a clean slate… all you have to do is reach the end of that day without reaching for your stash, and in doing so you’ve just taken the first step towards dramatically improving your life. But at some point during that day, inevitably, you fuck up …’’

Having the new album ready, how does that make you look back on former album `The Judas Table’?
,,`Judas…’ is still a strong album in my eyes, it’s just different to `Black Market…’, in the sense that it’s much calmer, it has many more acoustic passages. But this is my goal anyway, to always release an album that feels different to the last one. `Judas…’ has strong songs, every song I put on any album is there because it has a strong identity, strong melodies, regardless of whether it’s acoustic, synth, rock …’’

What will keep you busy the next couple of months?
,,I’ve took the (possibly) insane route of self-releasing this album, which is something I’ve been wanting to try out for a very long time… I’ve been envious of bands starting out, I see them on social media making runs of CDs, going DIY, taking care of things themselves, and I knew that eventually I would, if I had the balls, do it with a full studio album. So, my time these days is just spent administrating all of that, making sure CDs get where they need to be going, whether it be shops, distributors, or direct to the fans. Christmas and New Year will be a time for relaxing, and 2019 will bring the next round of tours. I’ll also have to start planning in what order my next few releases will be. I have an abundance of options for that, but already, over the last few days, I’ve made my decision about what the next Antimatter studio album will be, and it’s quite a big one….’’
—
Header Photo by Mariam Gevorgyan