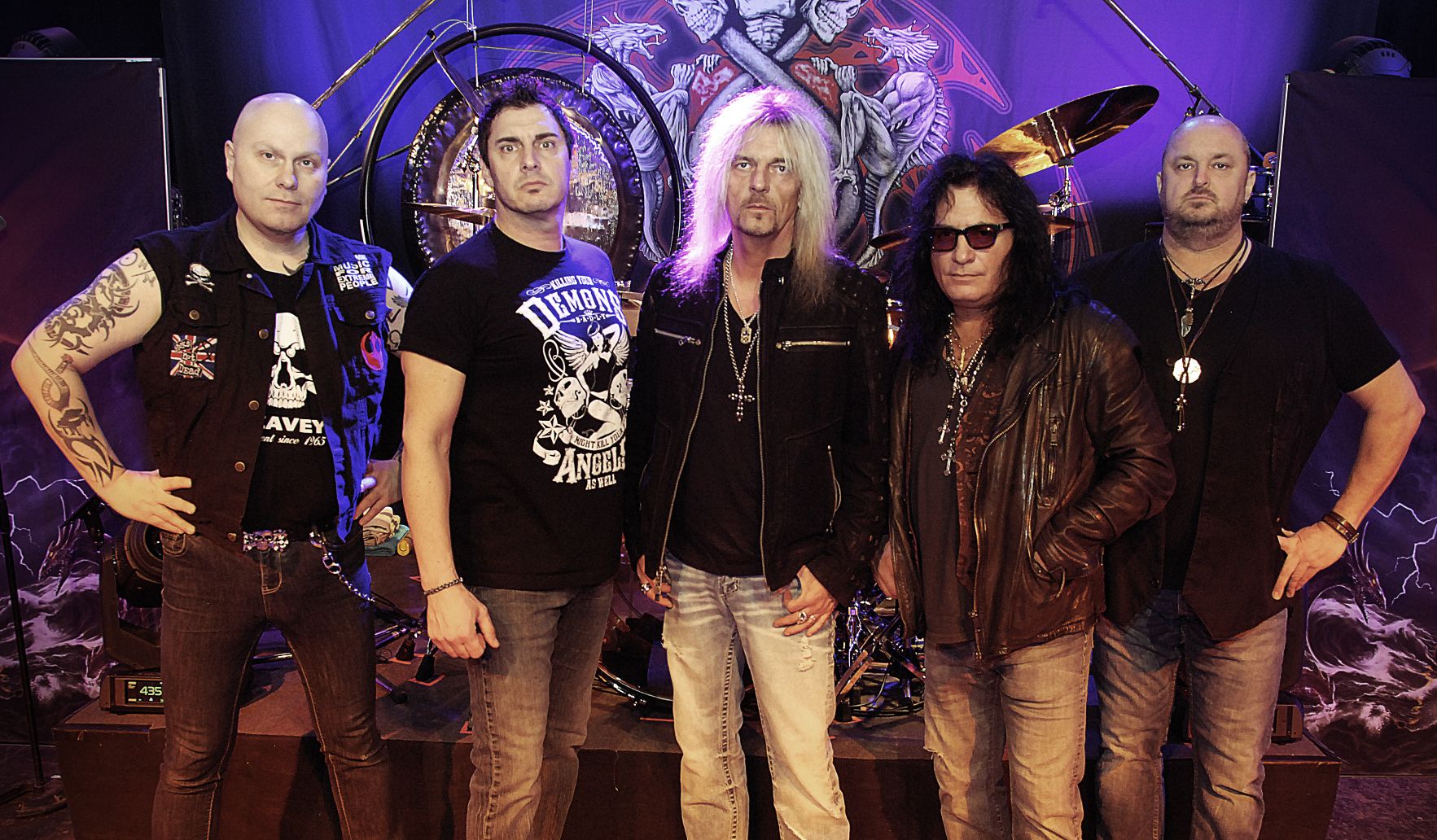 German guitarist Axel Rudi Pell starts the new year strongly with the release of his latest album ‘Game Of Sins’. Together with his long time members Ferdy Doernberg (keyboards), Volker Krawczak (bass), Johnny Gioeli (vocals) and latest recruit Bobby Rondinelli (drums, ex-Rainbow), the now 55-year old Pell delivers classic melodic hard rock as he has been doing for more than 25 years. The musical formula from Mr. Pell has often been criticised as ‘too much of the same’. HBLS chats with the sympathetic man about his past, his present and his future. 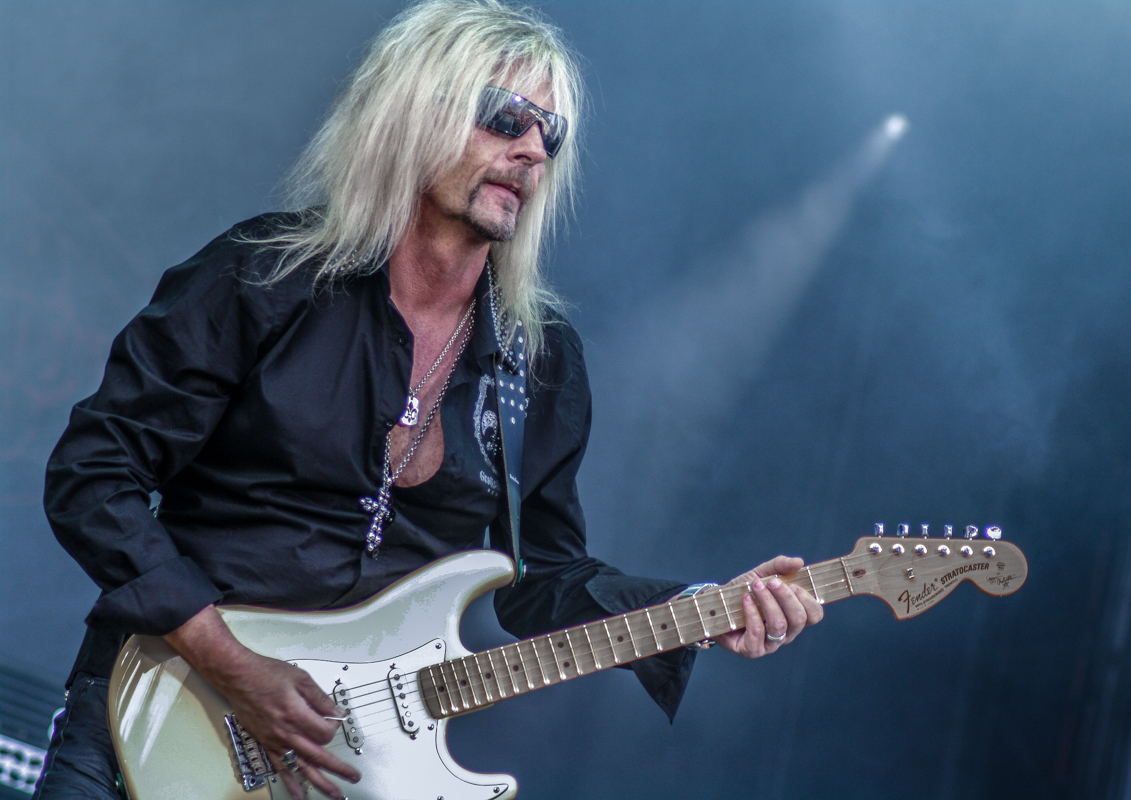 I have known Axel for a long, long time. At one stage we were both working for the Metal Hammer magazine and I saw him every month as Axel was working as photo-editor in the offices of Metal Hammer in Dortmund. I got to know him as a guy with a great sense of humour. Something that has not changed as he picks up the phone announcing himself as Tony Iommi …. He wishes….
,,It was around 1993 that I quit that job and I have not had a regular job ever since. I chose for my musical career and although times were tough every now and then, I have managed to survive and have been able to make a living with my music.” 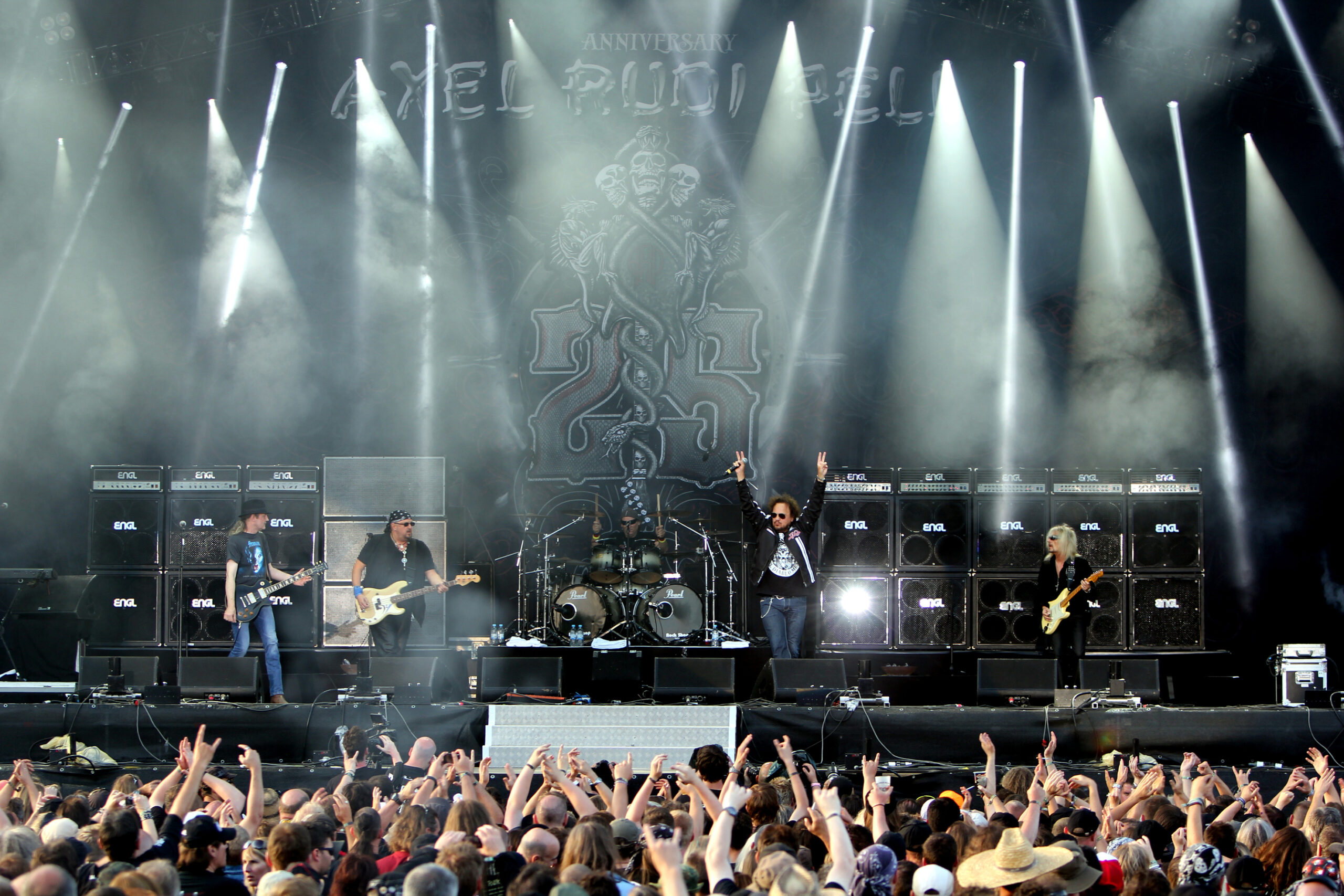 Before we talk about the new CD I would like to take you back to the release of the DVD “Magic Moments”. That document was a celebration of you being a recording and touring artist for 25 years purely under your own banner. You invited people that have worked with you throughout your career, delivered a show that lasted more than 3 hours and featured names like Rob Rock, Jeff Scott Soto, Graham Bonnet and many, many more. You even reunited with your old band Steeler with who you recorded four albums in the period 1984-1988. It must have been an enormous job to put that project together?
,,It has turned out to be the highlight of my career so far. During the years people often asked me if a reunion of Steeler would be on the cards and my answer was always no. But when the idea came to live to celebrate 25 years of Axel Rudi Pell, it started to make sense. But I had my doubts. Volker Krawczak plays in my band, so I knew he was in shape. But I was not sure if the other guys were. I rang singer Peter Burtz and he agreed straight away. The other guys wanted to do it as well. So we got together again and rehearsed. It went all right. I was so lucky that the promoter from the yearly Bang Your Head festival in Balingen, Germany would give us a stage. I rang a lot of people. Some said yes, some had a problem with their own work schedule, wanted to think about it, some refused. Lucky for me the main people that I had in mind came along. It was a massive task to organize everything. A couple of days before the show we managed to get most musicians together, so we could go through the music and put a set list together that would suit everyone. It was great to see that the people that visited the festival stuck around to see us. The festival started at noon and we started at 8 PM. Everyone stayed, around 15.000 fans saw us perform. I was the only musician who could not leave the stage, I played for more than three hours. During a drum battle between Bobby Rondinelli and Vinny Appice I managed to go for a piss, haha.”

How did you feel after the show?
,,Tired, proud and happy. We all got together for a great party. But I had to keep myself in check, because the next morning the tour bus was waiting to take us to Vienna, Austria were we did a show with Deep Purple. Like I said a highlight.”’

A remarkable fact in your career is also that you have never changed your record company. It has been SPV/Steamhammer all the way…
,,I never felt the need to change. The people at Steamhammer are more friends than anything else. I can do what I want. I have total control. I give them the product when everything is finished. That is so rewarding, so good. No interference, nothing. Do I think that I am a priority for the label? At this time yes. In the nineties the label had a lot more groups and artists. There are still some great bands on the label, but not as many as there used to be. So yes, because I have been sticking around slowly but surely I have become a priority release. The packaging of the product is always great. There is a special edition and now also a double vinyl release. They are really doing their very best for me, so I have got no reason at all to change.” 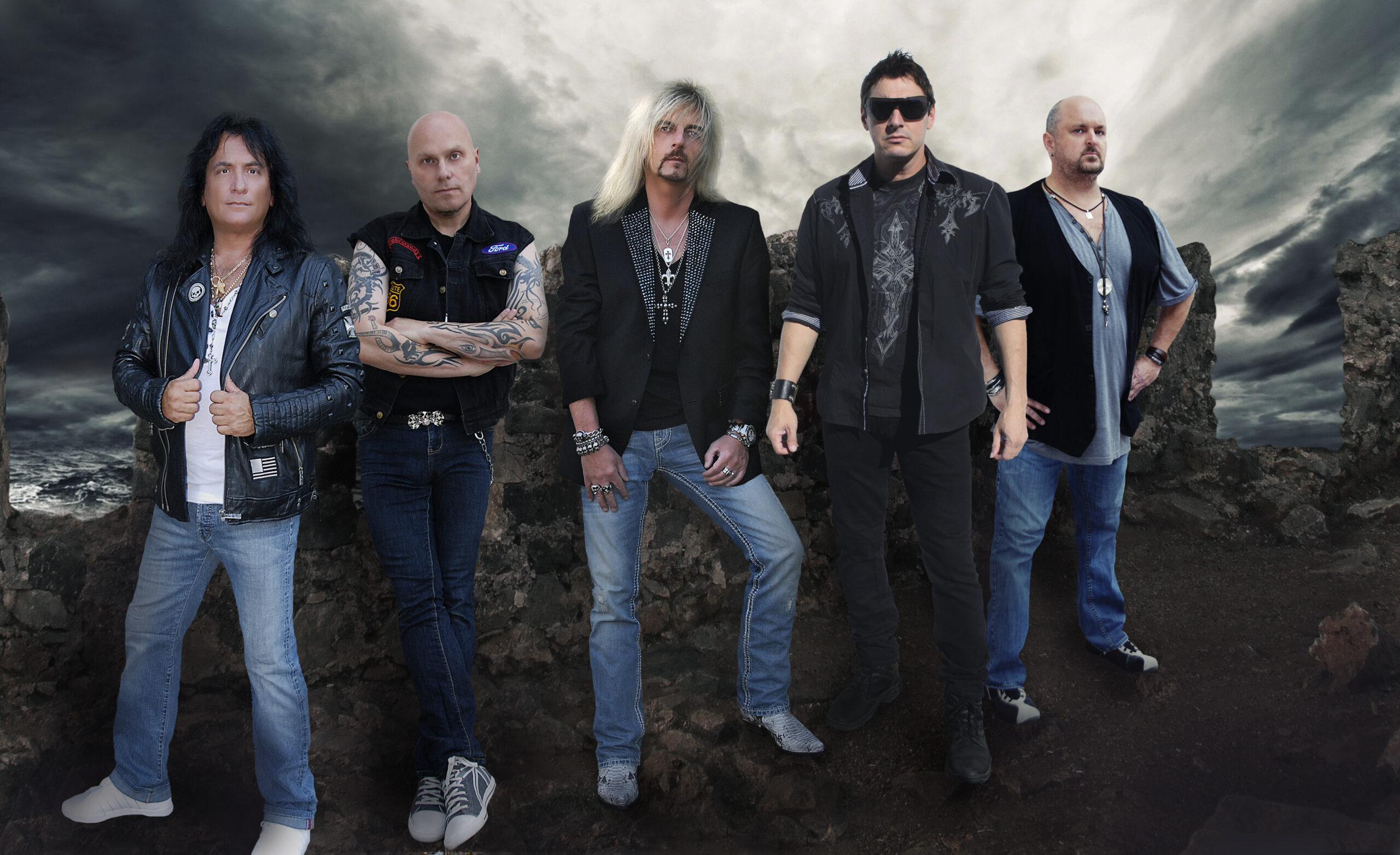 Your main market has always been Europe. What about expanding that market a bit more overseas?
,,Germany, Switzerland, Austria, The Netherlands, Belgium, Italy and France have been good to me. And the UK could be a target as well. My music should be interesting for the Asian market. In earlier days I had a deal with JVC for Japan. But they just released some of the albums and did nothing with them. No interviews, no chance to tour. The whole scene there has collapsed. I heard from the guys from Helloween that they use to sell out Budokan for five shows in a row. Last time they did one show and that was far from sold out. It seems that the Japanese fans have changed their musical taste. ‘Game Of Sins’ will be released in Japan, but Steamhammer will do it themselves. That will be the first release in almost ten years. We will see what happens.”

You prefer to work most of the time with the same musicians. Volker and Ferdy have been with you for years, so has Johnny. Bobby Rondinelli replaced Mike Terrana on drums for the 2014 ‘Into The Storm’-CD. Would you care to explain?
,,When I plan the recording of a new CD and a tour I give the guys plenty of notice. I make clear what the timeframes are and if they are free to record and/or tour. That’s how it has always worked. For the ‘Into The Storm’ sessions I did send some emails to the guys and everybody would be on board for the studio and the stage. Shortly before we started to record the album Mike mailed me that he would not be available for the tour as he had committed himself to Tarja. He denied that he had committed himself to me. I sent him the email that he had sent me assuring me that he was available. He could not do it, so I told him that I did not need him for the recordings. That created a problem for me. Via a good friend that was and still is connected with several musicians that have played in Rainbow, I got in touch with Bobby Rondinelli. I talked to him and later send him some MP3 files with my music. He called back and said that this was his musical taste and style. He absolutely wanted to join. Man, Bobby is like a brother to me. So easy going, a really nice guy and above all one of my heroes. So that problem was quickly solved.

What is the influence of the other musicians on your music?
,,I am not a dictator, I will listen to what they have to say. But usually I write everything. I am always composing and quickly record a riff or a chord. I have a work room at home and there I accumulate the ideas. Later on I will play back what I have put down and start selecting and fine tune the song. I am not a keyboard player, but I can play a bit, with two fingers, haha. It just gives me a basic idea. Ferdy comes in and might change it a bit. I also write the lyrics and the main melody for the vocals. I skype a lot with Johnny who lives in America. I send him the ideas and he might change it around a bit, but the main idea always stays intact. The first time that Johnny recorded for me he came to Germany. It was winter and he got sick, lost his voice for days. Since then he records the vocals in his own little studio. It makes things easier for him. That is the way we have been working for the last years and it might not be ideal, but it is as it is. I am used to working this way now. For the rest I organise the shows and everything else, even the design and printing of the merchandise. I also do my own book keeping. This absorbs me, so I don’t have time for a regular job. This is my job and this is how I make my living. I am honest with you when I say that these days I need to tour to make ends meet. After the cost for the musicians, the studio and everything else involved, my recording budget is as good as used up. So the gigs bring some extra money. People come to the show and most of them like to leave with something that reminds them of it: a CD, a sweater or a banner. So I try to be creative and offer them good merchandise.”

Your last album ‘Into The Storm” and also ‘Game Of Sins’ is very consistent. The quality of the compositions is up to scratch. That was not always the case. There were some ‘fillers’ in the past….
,,I agree. I think that especially the 2008 CD ‘Tales Of The Crown’ did not have a great amount of strong songs. Maybe the creativity was a bit low at that time. The last years I have really tried to write the best songs possible.“ 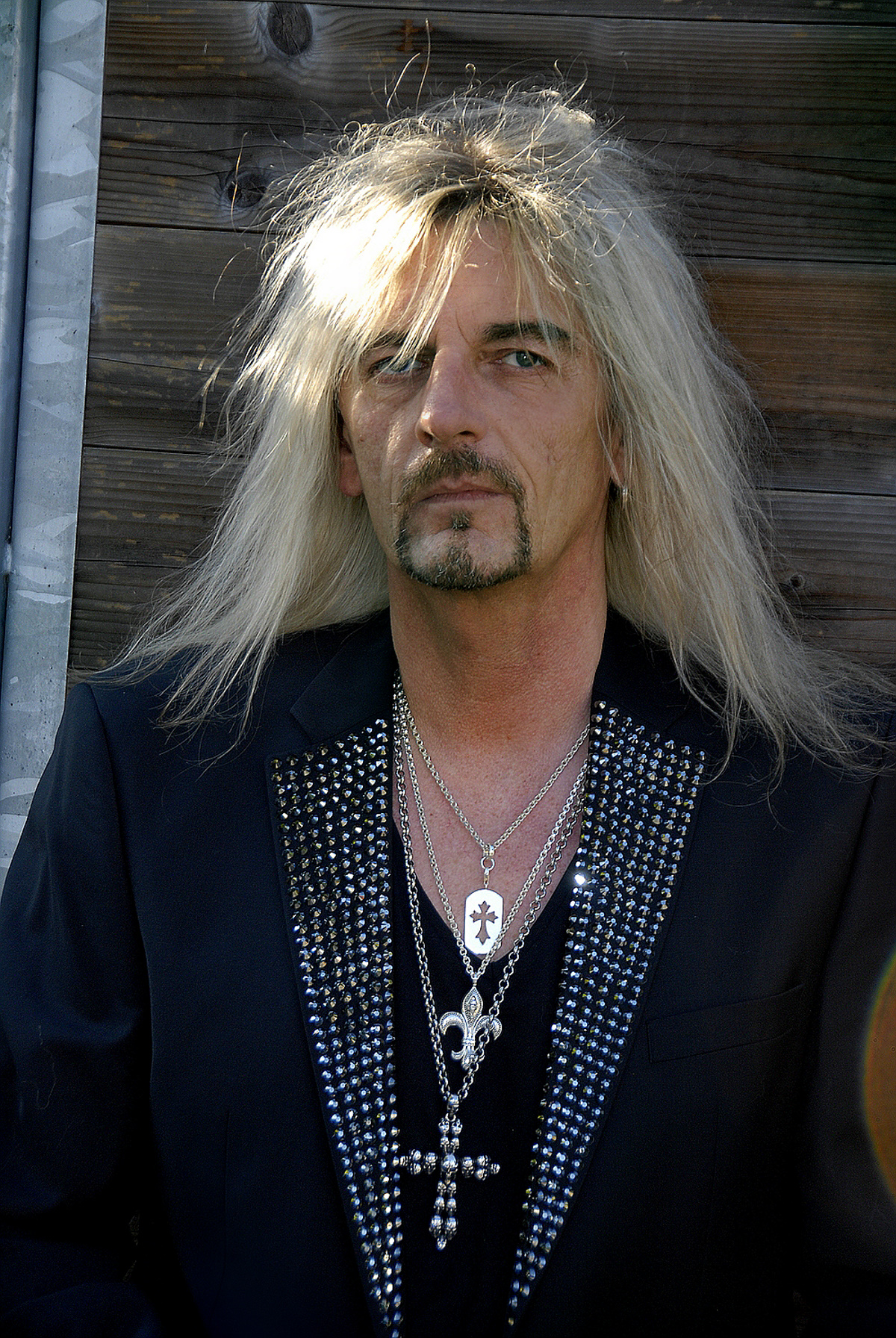 Where do you see yourself in the future? You are not a spring chicken anymore…
,,As long as I am healthy and the fire still burns inside of me, I will keep going. I have the support of my wife for the last 12 years, which is very important to me. And it also depends on the public. The people still seem to enjoy what I bring to the table. So at the moment it is business as usual!!”