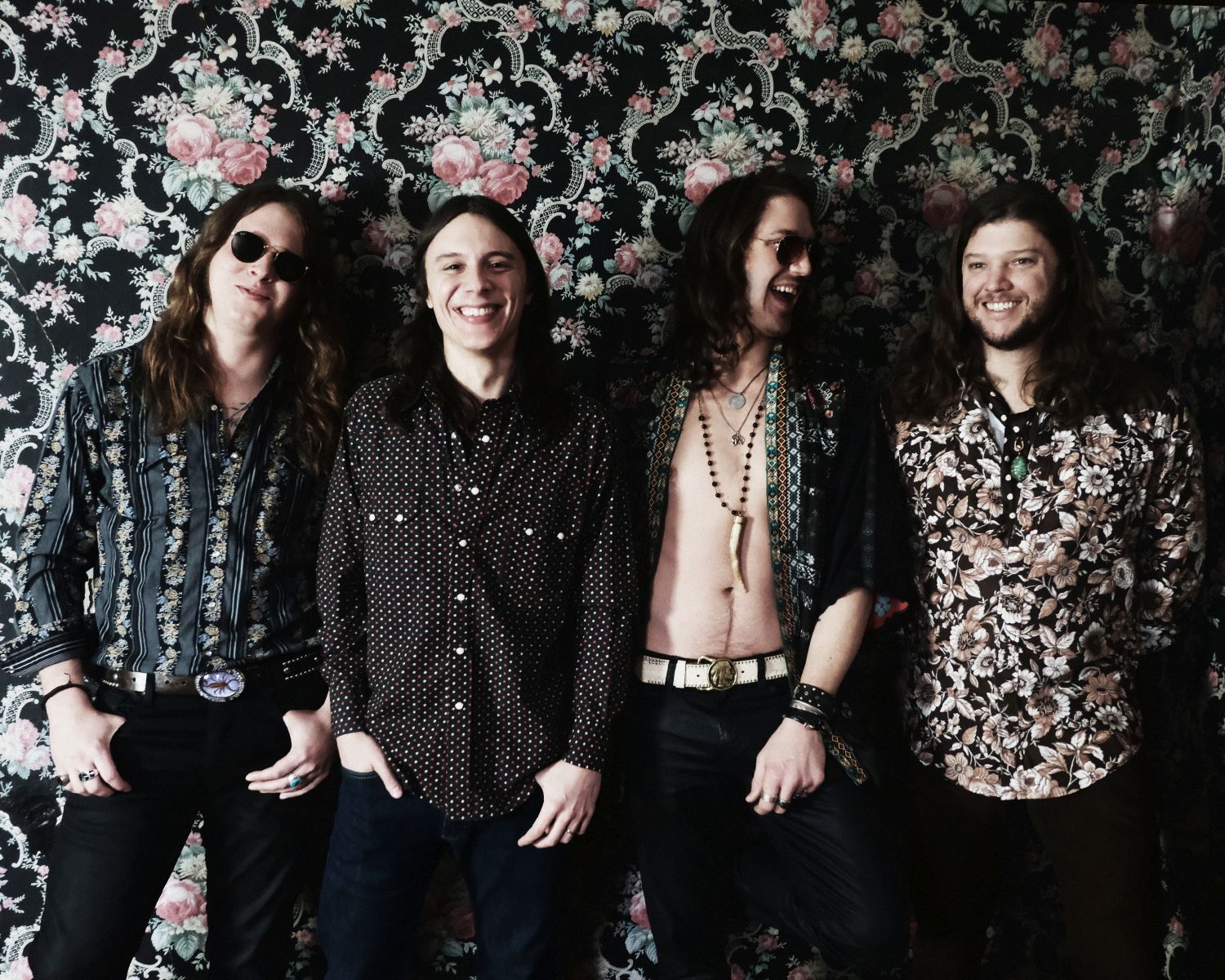 The Sound Of Natchez

If authentic southern soul rock makes your heart beat faster, seek no more because BISHOP GUNN will be your thing. In Natchez, the antebellum mansions may remain, yet many of the city’s native sons and daughters leave in pursuit of better opportunities for themselves and their families. One group of young guys however left for an entirely different reason; to bring their music, the sound of Natchez, to the rest of the world. HeadBanger’s LifeStyle’s Stan Novak was very much taken by surprise by Bishop Gunn’s debut album ‘Natchez’ and decided to hook up with the band during their first trip to Europe. Both forces met in Cologne, Germany where the band performed at the MTC club on March 6th.

MTC is as underground as can be. A steep stairway descends from main street Cologne into the small, dark  and somewhat grim club that breathes anarchy allover. It provides a far from typical setting to meet up with a bunch of southern soul rockers that come straight out of the Mississippi delta. The band does not seem to care much about it though. Even though they feel a bit misplaced, their mission is clear and that is spreading the Bishop Gunn gospel. Before they take the small stage we descend an extra level to end up in a humid and fungus infected storage area, which could easily serve as setting for a random horror flick. It turns out however to be a fruitful environment for an in-depth conversation. 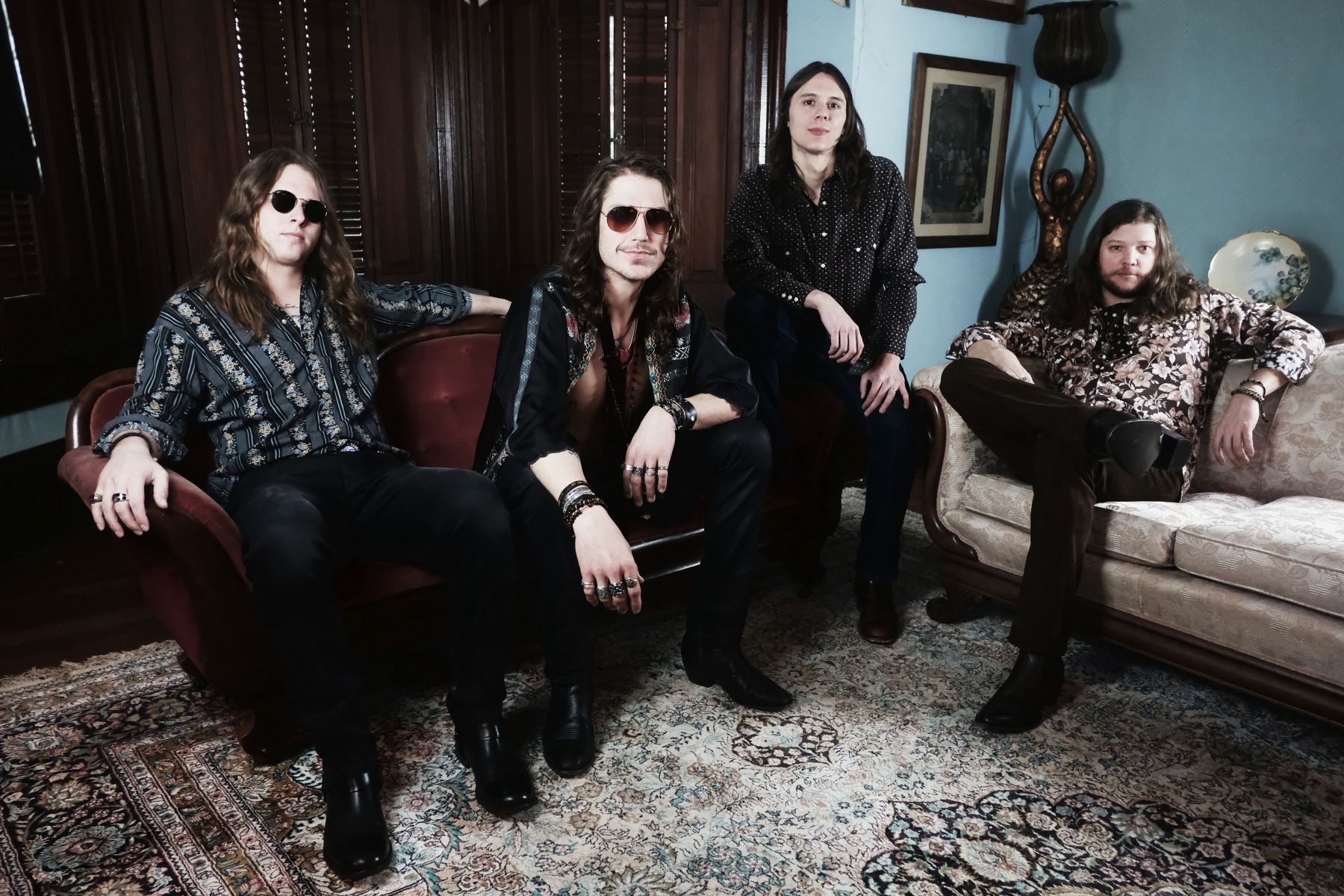 ,,We are a multi genre band with quite some colour to is. We sound sweet but gritty”, Lead singer Travis McCready (31) rightfully claims. ,,Natchez, Mississippi is our birthplace but for career reasons we moved to Nashville, Tennessee a few years back. We still have our own annual festival in Natchez though, called the Bishop Gunn Crawfish Boil which draws a 4000 strong crowd. The audience is getting more international each time. Last time we had visitors from seven countries. Come check it out some time, you are more than welcome since It would be cool if some writer from a far could put it on the international radar. The city’s mayor officially declared it Bishop Gunn day. It is always in the second weekend of May. Natchez is the oldest town on the Mississippi river. It is a small town with a lot of charm. A little bit like a miniature New Orleans.  Really worth a visit.”

How would you explain the Natchez sound?
,,Natchez is the oldest town on the Mississippi River. The name comes from the native Indian tribe that once lived there. Thru the centuries it turned into a trading point and melting pot of culture. Highway 61 and the river gives Natchez  its significance. Willy Dixon, the blues legend that Led Zeppelin drew from so heavily is from Vicksburg which is only 30 minutes up the road. The Mississippi delta carries a lot of musical history. The UK blues explosion scene of the mid/late sixties picked up on those early delta roots, added their rock n roll flavor to it and then threw it back at us. In comes the soul since I pull a lot from the likes of Otis Redding and Wilson Pickett. Our guitarist Drew Smithers is more into the Allman Brothers Band kind of guitar playing with lots of slide and smooth tones. We all have our favorites in the same area and when we put all our elements together you get the stew that is Bishop Gunn. It creates its own recipe so to speak.”

Re-locating
,,Drew is born in San Francisco and grew up in Connecticut but he studied the shit out of the southern culture and ended up in Nashville. The other three of us grew up in Natchez but in order to make a career out of it we also moved to Nashville. Nashville is not just country anymore. It is everything and it is really booming. A lot of industry leading types have relocated to Nashville. We met Drew during some studio work and that quickly led to us joining forces. It all grew from this little project into what it is today. The Natchez trails stretches for 400 miles (640 kilometres) from Natchez all the way to Nashville. The famous Muscle Shoals studio is on that route. That route basically defines the southern sound. It was traveled for hundreds of years which led to a lot of cultural influences and into this rich musical sound. Besides that, Natchez is also a beautiful place; a well-kept secret though. Fairly small but a lot to offer. The main thing that sets Natchez apart from all the other little towns is tourism. Tourism kept it alive.” 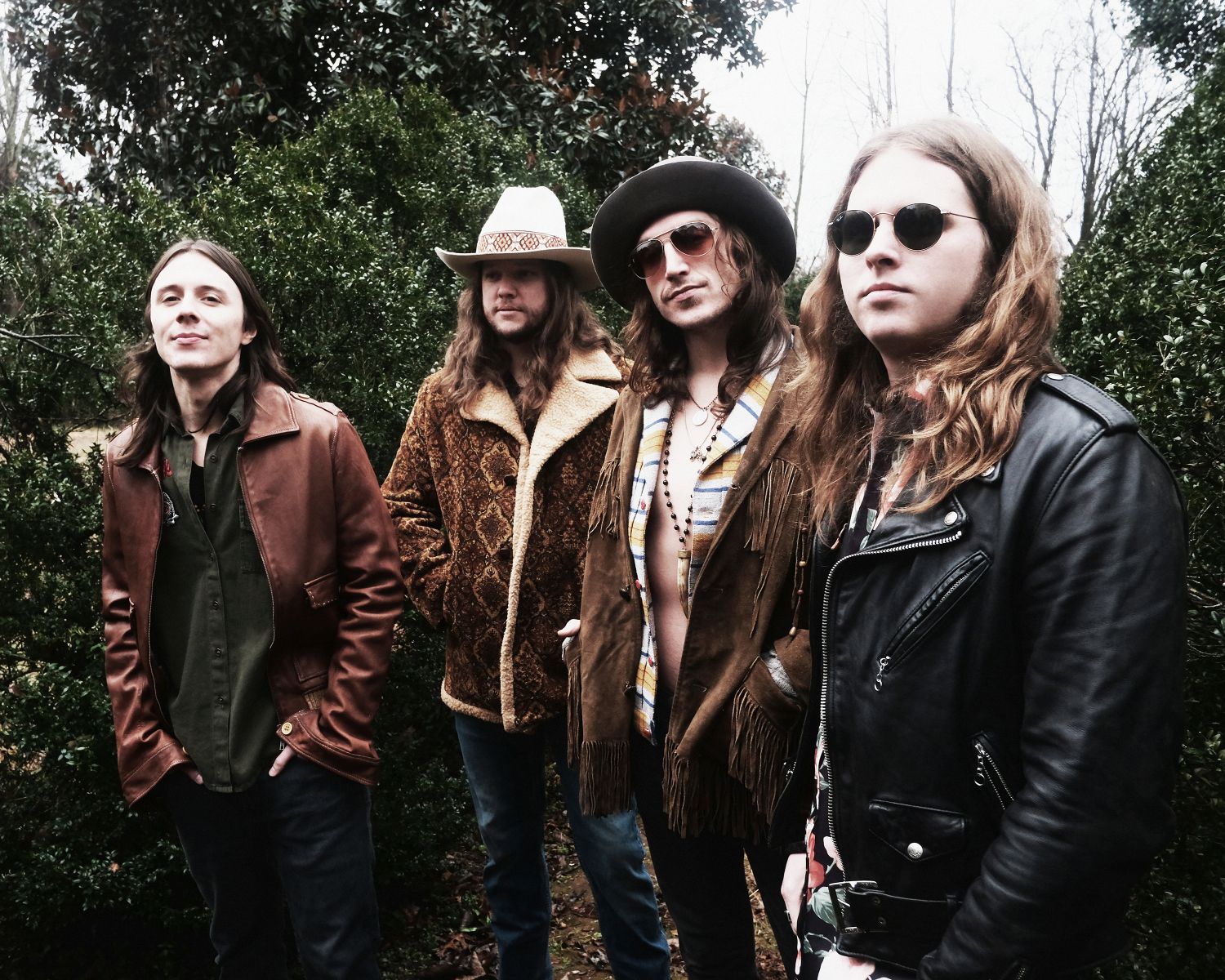 Sink Or Swim
,,The move to Nashville was a sink or swim kinda thing. We are not fully swimming yet but we aren’t sinking either. There is just an awful lot of competition out there, so you have to stay on top of your game. We had some people helping us networking wise. We live rural,  about 30 miles southwest of Nashville in a camp house on a small property where we can be creative. Our rent is low and all the money we make goes directly into the band. We did 130 shows last year in 30+ states. We did a six week tour with Marcus King which was an eye opener. We really did some awesome shit. We met a lot of friends last year and saw a lot of the country. We try to limit our spending and so far we have been able to rough it out. Our only main expense at the farmhouse is electricity. Our water comes straight from a spring in the mountain and reaches us thru a filter.”

Success
Selling out downtown Nashville with 700 people was a huge milestone for us. A lot of other bands that we admire are not able to do that. So we know we are off to something good. Hopefully we will be able to create a similar fanbase in Europe. We really want to come back here and see it grow. On this first trip we are already selling 100+ tickets so it all looks very promising, especially since the cd has not had an official  release yet. We sell our cd’s online and on show days. You can also not underestimate the power of social media. We played shows with bands like Lynyrd Skynyrd, Blackberry Smoke and Black Stone Cherry and people really pick up on that.”

Please explain how a band that no one in Europe has yet heard or seen gets to be the opening act for the mighty Slash in Europe on seven occasions. Today you play in front of a small crowd in some obscure underground cellar but tomorrow you will face 5000 people in Zurich.
,,Slash is a huge factor indeed. But it is not a pay to play deal where you have to buy yourself into the tour. No way. It costs us a fortune to be over here for sure, with the airfare and transportation and such, and the money we make on our clubtour will not cover that. The tour with Slash is an investment but I am sure it will pay off. The exposure is huge. We only have 30 minutes so we will put on our most rock n roll face. The deal was made via the platform we are on. One manager that knows another. That’s just how it often works. We love it over here in Europe man. All these cultural impressions are a real eye opener. Paris was a bit of a culture shock though since I was not able to communicate there. If I would try to order food for example or get a haircut no one would understand me. My tour manager would have to translate. I absolutely loved Utrecht which was my favorite stop on this tour. Everybody was so welcoming. The appreciation in Europe is often more genuine then in the States. But the atmosphere varies per night. In Dublin things got really rowdy and in Glasgow they were very attentive. Every audience seems to have its own character. That is very cool to witness.” 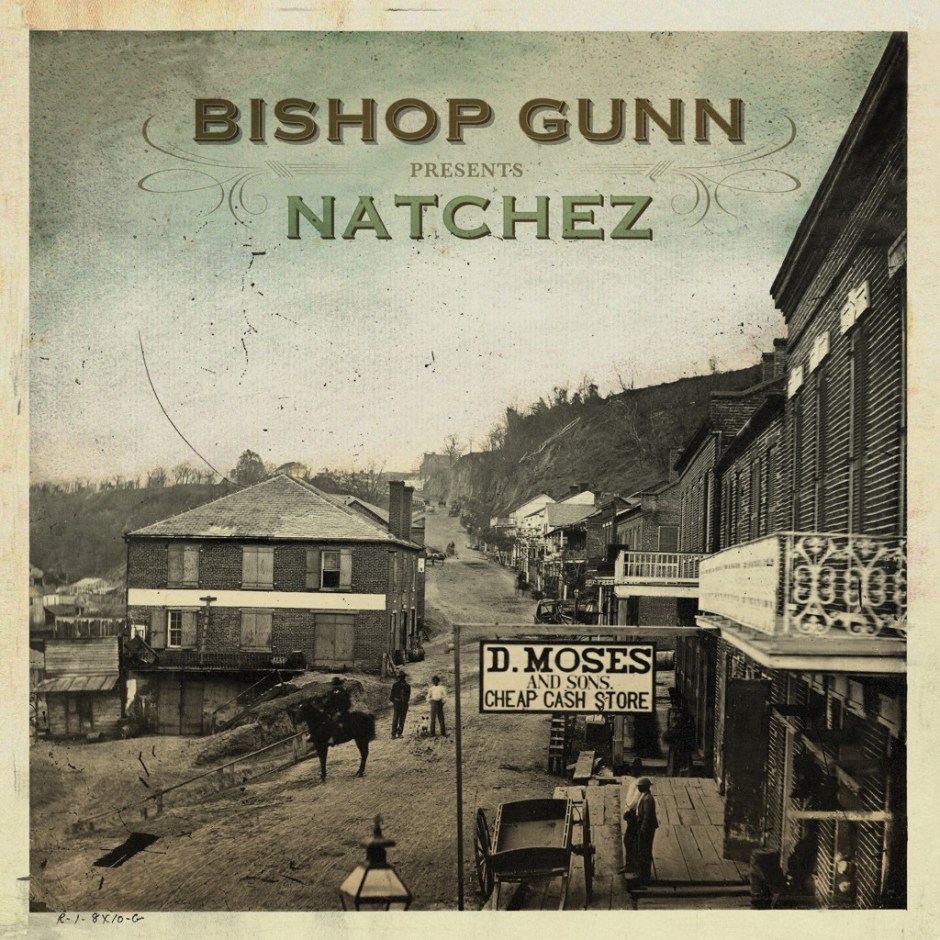 The songs on ‘Natchez’ are very rich in terms of background vocals, instrumentation, slave choirs and filled with dynamics. How hard is it to translate that to a live setting with just the four of you?
,,I am glad you ask that question. The answer is Energy! If you want to hear the record then play the record. Playing live is a different ball game to us. You have to perform it in a way that the people don’t miss the details of the record. One day we may be in a position to bring out a big production. As for now we have to do with the core key elements, the vocals and Drew’s tone for instance.”

Bassist Ben Lewis adds to the conversation:
,,One of those southern rock musicians we played with told me he liked the sound of our live stuff because it sounded like an old klinky truck driving down the road that is about to fall apart but it doesn’t.”

There must be a story behind the bandname…
,,In the early days we were booked on a festival  but we had no bandname yet. While we were smoking a joint at a cemetary we saw the name Bishop Gunn on one of the tombstones. It stuck with us and after we threw it in the bandname mix it eventually was chosen.”

McCready finishes things up:
,,The person in question, John Edward Gunn, was a Northern Irish Catholic Priest who became a bishop in Natchez. He died on February 19, 1924. When my son was born on that same day it really spooked me out. Out of 365 possible days he had to be born on the day the man after which my band was named died…”