Ten years ago BlackRain started as the `local Mötley Crüe’ of Haute Savoie, a small town somewhere in the French Alpes. But it didn’t take this four piece that long to expand the borders of rock and roll. Paris became their new residence, they released 4 self-produced albums (`BlackRain’, `License To Thrill’, `Lethal Dose Of…’ and `It Begins’), did numerous gigs in France, Europe and Japan, gained a lot of attention with their 5th position in the final of `Talent Show’ on French television and worked with famous producer Jack Douglas (known for Aerosmith, Cheap Trick, Alice Cooper, New York Dolls and John Lennon) on their latest release. But with highs also comes lows and BlackRain recently had to crack a few hard nuts. Now finally free from past commitments, the band signed a record deal with UDR Music for their upcoming 5th album `Released’, which will be out March 25, 2016. HBLS spoke with charismatic singer/guitarist Swan Hellion about the new album, the band’s regained artistic freedom, image change and the bright future BlackRain is heading for. 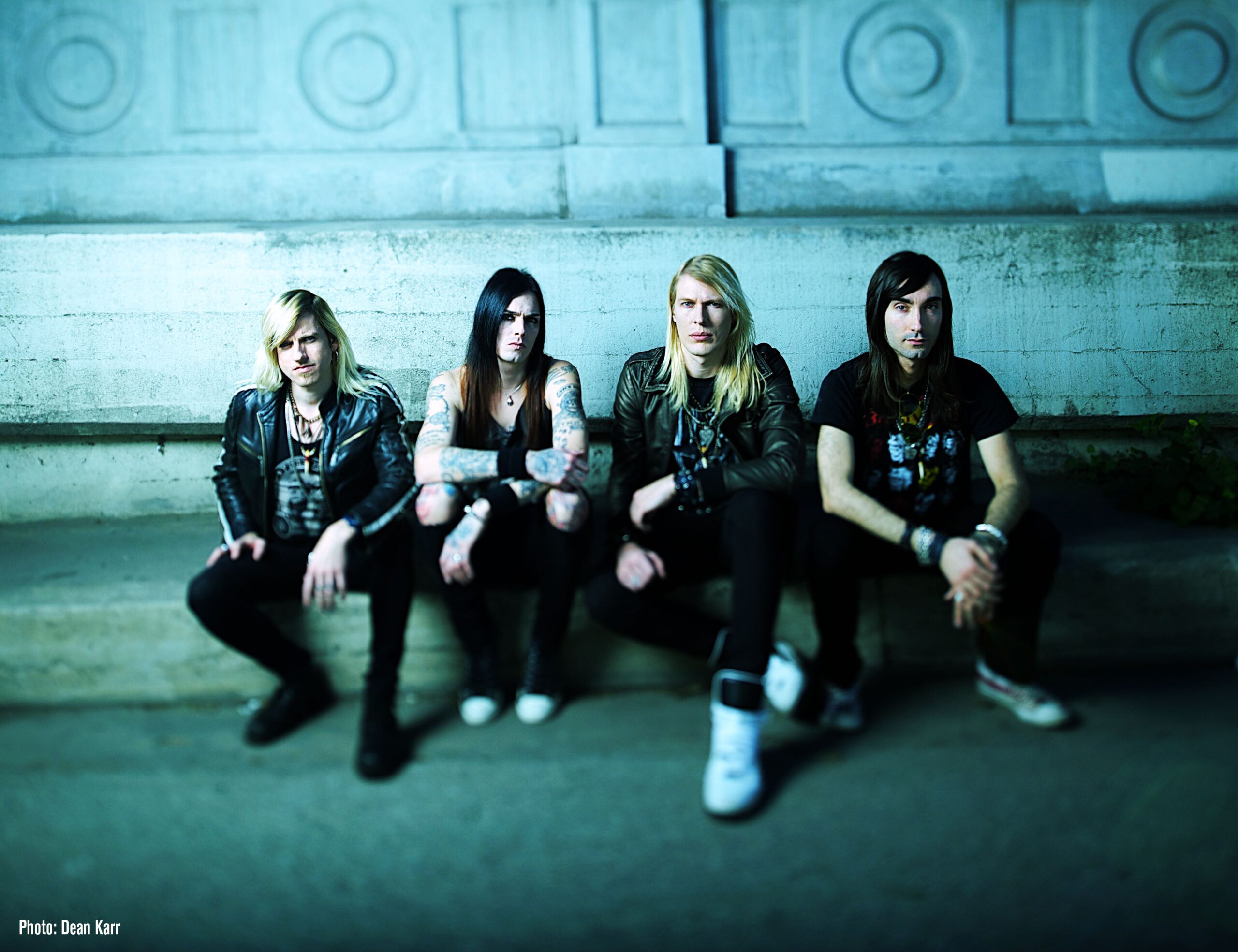 The new album is called `Released’. That sounds like the band had to close a chapter before you were able to start a new adventure.
,,That is absolutely right! We were in a very complicated situation with our previous management. We were losing control over too many things including the artistic direction and so we reached the point of no return. It wasn’t simple to part ways since much money was invested in the band, but we did it and started everything from square one. We made a new album, found a new management and label and we are very happy about everything today. `Released’ symbolises the fact that the band got its complete freedom back but also the fact that we’re at last working with a record company that is up to raise BlackRain to an international level.’’

What made you realize something had to change to move forward?
,,As I mentioned before, it became quite unbearable to feel trapped in a cell, losing little by little any kind of artistic freedom. Our previous manager started to have a real bad relation with everything and everyone around the band. It became bad on the professional side as well as on the private side. This bad relation was driving us straight out of tracks. We were losing our contacts from the music industry and also our friends. I think we’ve been very patient and showed too much understanding. At the end there were only two choices for me; to get rid of that management or to stop playing music…!’’

Where is the band coming from and where are you standing now?
,,We started from nothing about 10 years ago. We were living in the French Alps at the time where we quickly became the `local Mötley Crüe’ (laughing). Since then we’ve been doing records and tours all over Europe till Japan by ourselves, found a different record company to help us and built a solid fan base here in France. We were on French TV for the `Talent Show’ and that worked out pretty good for us, since we ended up 5th  in the final. We also worked together with producer Jack Douglas on the previous and on this upcoming album. So, the good news is we just signed a worldwide deal with UDR Music and we’re now waiting for the release of this record and hope to play everywhere we can!’’

UDR is known for classic artists such as Saxon, Motörhead, Skid Row, Girlschool, Europe, Alice Cooper, Uli Jon Roth. Why do you feel this is the right place for BlackRain and did it take a lot of effort to get a record deal?
,,I guess the band fits in there because we play rock like everyone else at UDR. It is not like being the only `glam rockers’ in the middle of black metal bands or even better, in the middle of French pop and hip hop music like we were at Sony France!! But most of all, it feels safe to be under the wings of such a great label, we know they have the power to bring us to the next level and we hope that it is what will happen in the near future. It wasn’t easy to find a record deal this time, but we took our time, it was crucial to find a good deal, as we’re growing older and as it becomes more and more complicated to live on the music today. We couldn’t afford to end up working with some small company that makes you buy your own albums or going on the road and pay to play in clubs. This is something you have to go through as a band but this also something you have to get over with after a while if you wanna grow and be able to make music your everyday life.’’ Can you describe the road you followed for making and finishing `Released’?
,,We always kind of follow the same track. I usually come up with the songs, Frank will add his drums parts, Max his guitar solos and MatH his bass lines. After that we make a selection of the songs we think deserve their place on the album and that’s it. 1/4 of the album has been made under the influence of the old management though, but still we only kept the songs we really liked. And as usual, we get inspiration from personal experiences, from the world around us.’’

Has there been a specific focus while writing the new material?
,,We only try to write material we like. We don’t care if it sounds more electro or more disco than the time before. So there wasn’t any specific focus, other than making music we enjoy.’’

What does the album represent in general and what does the end result say about you as a band, the individual band members and your work ethic?
,,This album is about the freedom we recovered and our international release. We realized that it’s good to have people surrounding the band to help us but it’s also important to have limits to it. We’re nobody’s whore anymore. We’re happy to have found this deal with UDR Music, being only who we are, looking the way we want and playing the music we want. We all feel much better and more motivated in this new chapter.’’

Producer Jack Douglas is known for his work with Aerosmith, Cheap Trick, Alice Cooper, to name a few and he produced your former album `It Begins’. What did he bring to the table with the new album?
,,It’s nice to be able to work with Jack for his great experience. He knows how to make us feel confortable and helps me a lot with the lyrics and my English accent. He always brings nice arrangements and great stories (laughing). He listens to what we want and simply is a great producer. It’s quite unreal to work with the guy that produced your biggest idols!’’

What makes `Released’ different from `It Begins’?
,,There’s different type of songs on `Released’, it has different moods and atmospheres and I think it sounds more like `BlackRain’. And there’s a huge difference in production, the simple fact that we’ve been able to follow the recording from start to finish changed the final product and the mix a lot. The general sound of the album is much better.’’

You also used Pledgemusic to realize the new album. Was that a back-up plan in case you couldn’t find a record label? Or was there a different idea behind that?
,,The Pledge campaign was a choice we made to be able to afford this expensive recording with Jack Douglas in Los Angeles. It was important to get a great sound on this upcoming record and to succeed with the campaign, since we were looking for a new deal this was two good points for us to show the labels that we had the attention of the fans and a product of good quality to sell. The pledge campaign in my own point of view is also a very, very good way to make the fans feel more closely involved in the project and also to make them realize how expensive it is to play music (laughing)!’’ 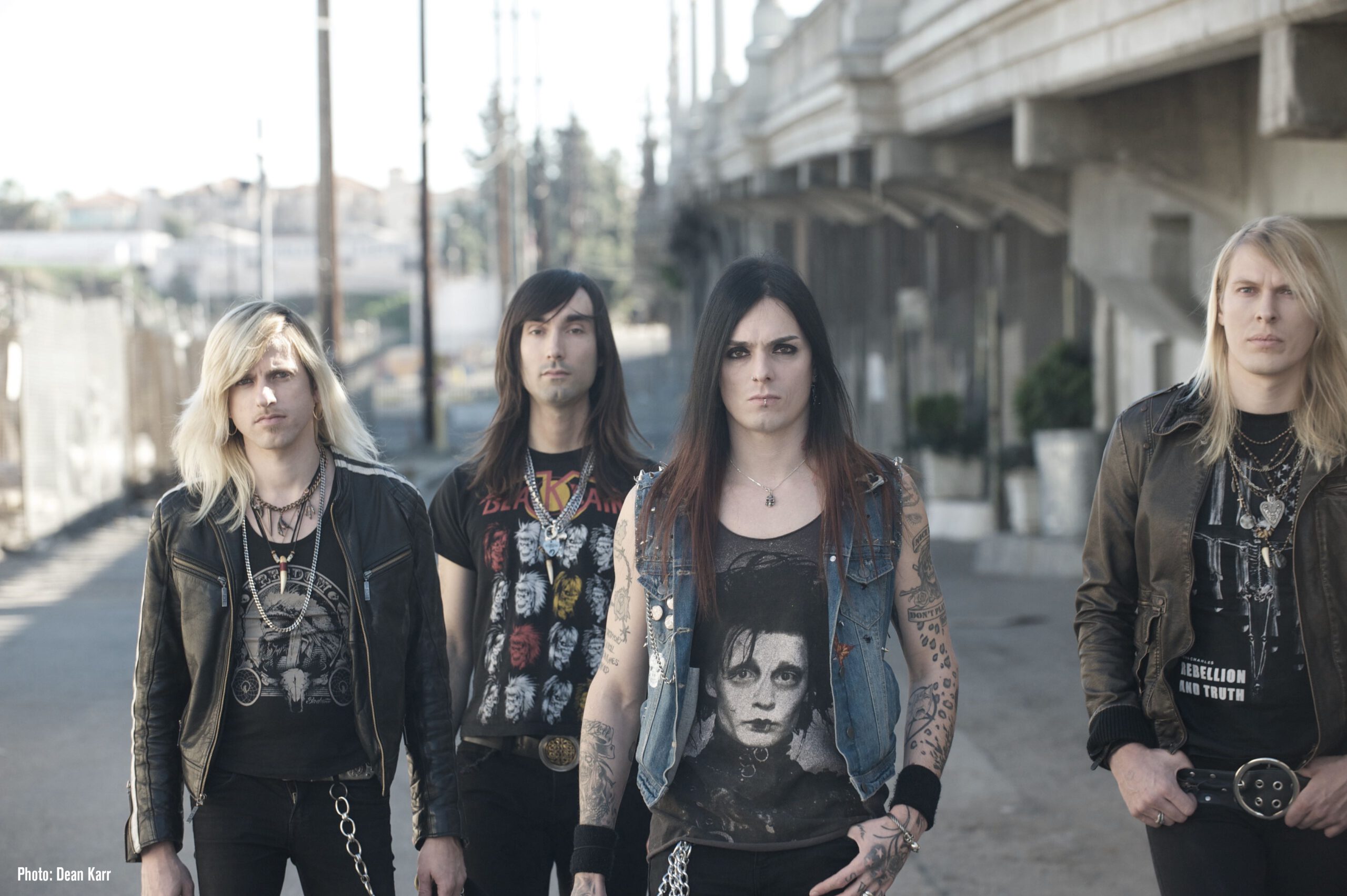 Image wise the band obviously changed back from a big hair, over the top glam metal look to a more street style, more similar to the early days of BlackRain. Is that a matter of growing up or wanting people to take the band more serious or a natural development?
,,That was one of the several things that I couldn’t take anymore with our previous management. It wasn’t our choice to dress up this way really. We always liked make-up and leopard tights, don’t get me wrong (laughing), but I never wanted the band to look like that, like damn fucking clowns…. So believe me it’s a pleasure to be back to our own visual style, a little more natural, from the streets yes! And yes, many doors have been closed to us because of this ridiculous visual.’’

Since BlackRain was formed in 2006 you established a name in France, including doing TV-shows, but outside France you are still a small fish in a big ocean. What are the priorities for the band in the near future to get bigger on the European market?
,,Priority to the international promotion first and then to promote the album on the road, as simple as that!’’

What is the motto of the band that keeps it all rockin’ and rolling even when times are tough?
,,We’ve been playing and partying together since we met in highschool. We kinda know how to deal with each others bad moods and bad habits. We’re also from Haute Savoie this mountain county from France. We’ve been raised in the `farmers’ way, this makes us strong people and not little bitches from cities like Paris. When times are tough we drink lots of red wine and tell each other what the fuck’s wrong and what the fuck to do to get over it!! Well, we always try to think about the future, for each problem there’s a solution. We made the choice to live by rock ‘n roll now, it’s too late to rewind. We’ll do it until we die.’’
—
Follow BlackRain on Facebook and visit the BlackRain website here

Official video for ,,Back In Town” taken from the new cd `Released’