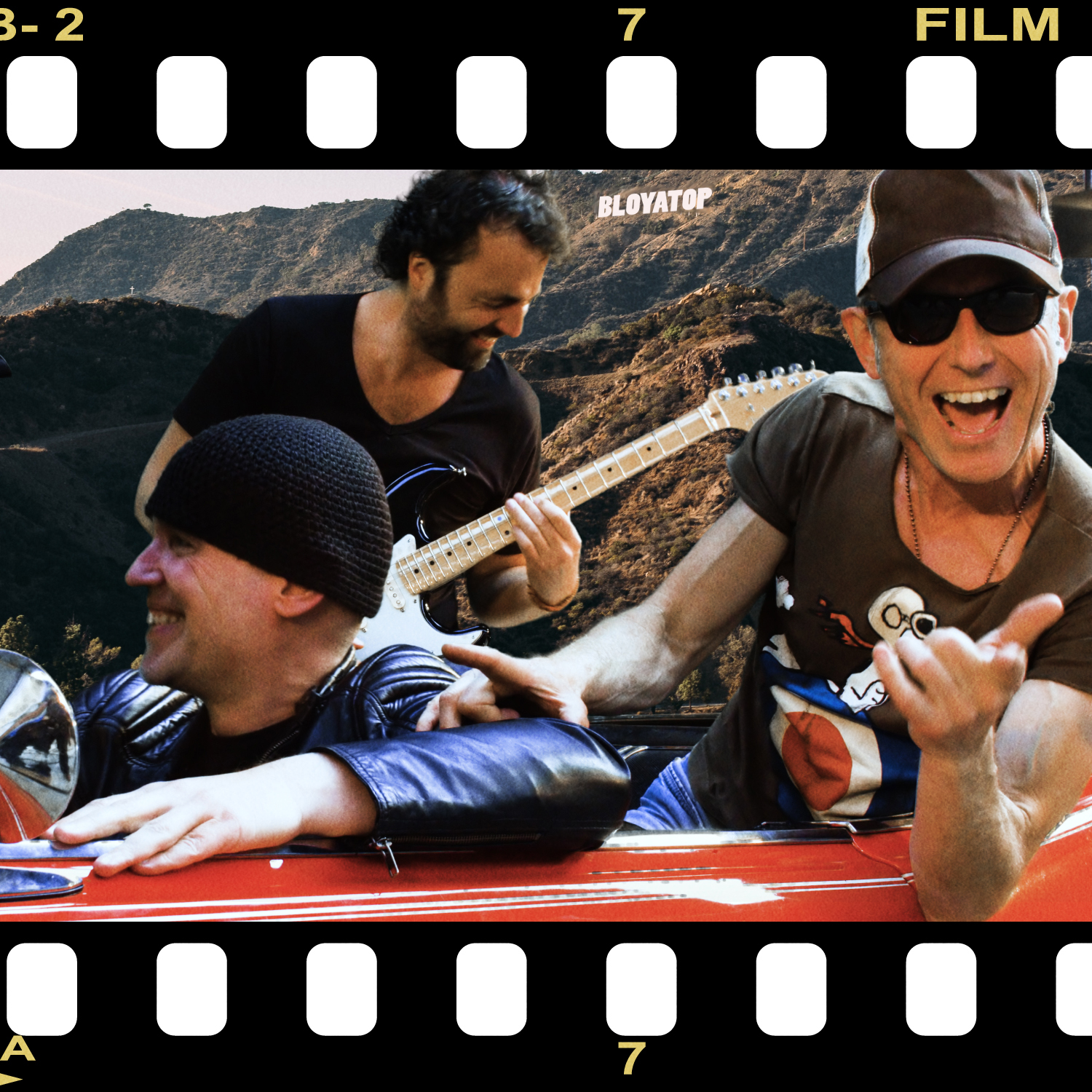 Despite a series of strong records over the past six years, Sittard’s heavy rock trio BloYaTop remains one of Holland’s best kept secrets. In the most southern part of the country, the province Limburg to be precise, this groove rock outfit consisting of bassist/singer Mr E, guitarist Mark Ferguson and drummer Paul Huge however became a welcome and often seen guest in clubs and on festivals. The upcoming release of the aptly titled fourth album ‘Groove Control’ sets the moment for the rest of the Netherlands [and abroad] to be infected by the sexy beats and grooves of this mighty fine rock trio.

The title of the newest addition to the band catalogue sums it all up. Whilst the previous offerings ‘Why Waltz’ [2012], ‘MayDay’ [2014] and ‘Fever’ [2016] put things in motion, ‘Groove Control’ shows the threesome firing on all cylinders. With an admirable work ethic and an arsenal of heavy yet catchy songs these guys are determined to start harvesting outside their home turf.  Headbanger’s Lifestyles’ Stan Novak meets up with these southern gentlemen in the Theelen Recording Studio in Munstergeleen. Since the album is still under construction HBLS is privileged to be among the first to hear the new collection of songs. And we are impressed to say the least. The new material is basically in sync with previous offerings, but this time around the songs are extremely varied and catchy. ‘Groove Control’ holds thirteen songs which are all marked by the tasteful and fierce fretwork of Ferguson, who’s technique and feel are well balanced. But this should not come as a surprise considering the axeman’s participation in internationally praised tribute bands such as Parris [Thin Lizzy] and Harris [Iron Maiden]. The rhythm section, on the other hand, is both solid and smooth and knows how to lay down one compelling groove after the other. Singer Mr. E proves to be a charming storyteller gifted with a healthy dose of tongue in cheek humour. The passionate rocker opens his heart about the bumpy road to wider recognition.
,,We are the hardest working rock band in Limburg so we certainly deserve a boost. Talent, songs and perseverance are present” he states self-assured. ,,What we currently miss is national recognition which mainly has to do with a dose of luck. A bin of money would also come in handy”, E says laughingly. The experienced frontman [in the past E participated in national melodic hard rock treasures such as Avalon and Soylent Green] refers to the fact that despite three fine albums, a national club tour with former label mate DeWolff, numerous shows supporting international acts like Dizzy Miss Lizzy, Y&T, Pat Travers, Mother’s Finest  and Steve Lukather, a live radio performance in the prestigious Countdown Café as well as a series of successful shows on some of the bigger festivals, his band has not been able to claim a prominent spot yet.

,,Our biggest challenge remains booking appealing shows. Every performance brings us new fans so the more we play the more fans we gain. We have the goods and the ability to deliver them. That’s the easy part. The real challenge is the marketing side of things. Exposure remains the key word. Having said that, we will keep putting our full energy into this band. Our batteries remain fully charged.” 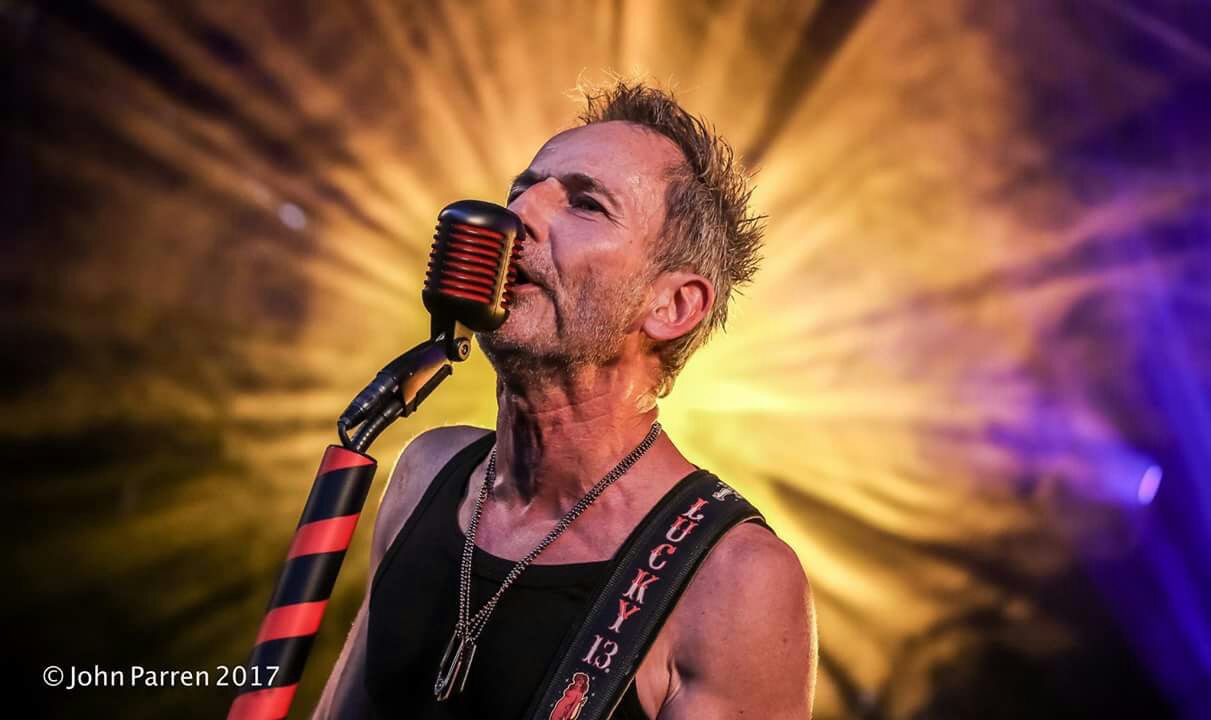 In order to promote the band better, E recently made some changes in his weekly pattern.
,, In my daily life I am a fulltime teacher but I started working one day less per week and use that day for band promotion. Up till now we basically kept everything in our own hands and the reason is simple; nobody is as committed to BYT as yours truly. Promotion requires perseverance and a thick skin because you have to deal with a lot of ‘No’s’ and  ‘Please call back laters’. It is difficult to get a foot in the door with the programming committees. In case of BloYaTop, seeing is believing. Live we are at the top of our game and every show leads to new invitations. We played the campsite of the famous Bospop festival one year and were immediately asked back. That next year we were opening the Marque Stage in front of thousands of people, which ultimately got us a record deal. We also had good exposure on mainstream festivals like ParkCityLive and Nirwana’s Garden Party. We get a lot of praise for our positive energy and people often wonder why they haven’t heard or seen us before. Last July we played De Zwarte Cross where we opened the Roadhouse stage. Despite the early hour we got a good party going and it turned into a kickass and great sounding show. We threw in a couple new songs to see how the people would respond and it all worked out great. That again led to a couple of new gigs. I really cherish that day because I never experienced such a relaxed festival. On all fronts, I’d love to go back there some day.”

BloYaTop’s loyal fan base in the south of Limburg allows the band to finance their releases through crowd funding.
,,We are proud to have such loyal and supportive fans”, E states. ,,It is our goal to keep it special for them. Those who pre-order have their names printed on the artwork for example. Crowd funding is a great way to draw followers closer to you. We noticed that it creates a certain bond. If a hundred people or more sign up you are pretty well on your way. You can then skip your way to the bank. I also cannot point out enough that people who visit live shows are the ones who keep that scene alive. With my 30+ years of experience in rock music I am aware that you need to have a big mouth in order to be heard. A big mouth however is not in my nature. I will however stand up for what I believe in and this band is exactly that. Everything about BloYaTop is just right. There is growth every year and with each album we evolve as musicians. For bands with original material it is extremely difficult these days so I’m glad that our record company TOP Records believes in us and backs us up all the way. The high demand for tribute acts and cover bands is a disadvantage for bands like us that play originals. There are simply only so many slots to book in the live circuit. I have seen many colleagues drop out over the years. They often switch to covers because of the better opportunities. Others quit completely. But that won’t happen to me. Of course there is an ocean of original music already and every note has been played a thousand times before but that won’t stop us from doing what we like most. Backing down or making compromises is simply not in our system.” 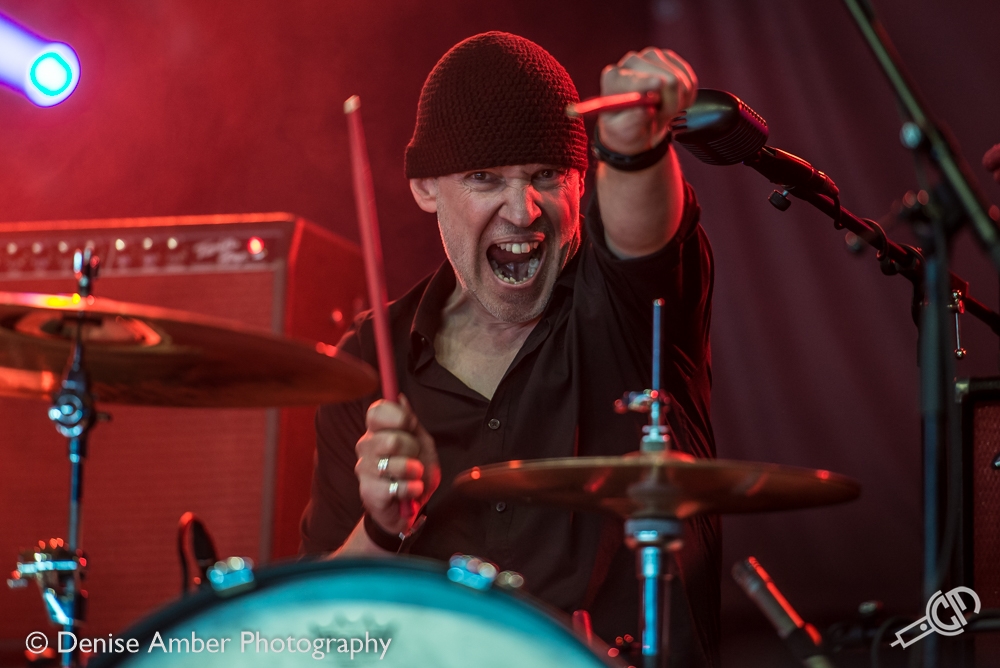 BloYaTop draws heavily from classic American hard rock. Ferguson’s flashy fretwork brings back memories of early Joe Satriani and Van Halen. King’s X also seems to be a clear influence and so are the likes of Deep Purple and ZZ Top. Drummer Paul Huge adds to the conversation;
,,We have a lot of fun writing songs. That has been the case since day one. Nothing beats recording little ideas and watch them grow into something big. It’s an exciting process. We operate as a tight unit and work closely together with our producer. As much as we like to increase the amount of live performances, we absolutely love working in the studio. It keeps us mentally on our feet. We form a good team. We listen carefully to each other, give easy feedback and our discussions always have a positive vibe. We are convinced that ‘Groove Control’ is our best piece of work so far but our boldest record is yet to come. You have to be critical and realistic though. When ‘Fever’ was just finished, we felt that it was not as strong as ‘Mayday’.  We had no problem admitting that. ‘Fever’ certainly had peak moments but was too experimental and did not really work out as a total piece of work. In terms of style and cohesion, ‘Mayday’ was a lot better, a real hard-rock statement.  Our debut ‘Why Waltz’ on the other hand had a more bluesy tone and vibe. The new album has balls the size of Tokyo with a fat sound in the low end. We are really rocking out on this one which makes these songs extremely fun to play live.” 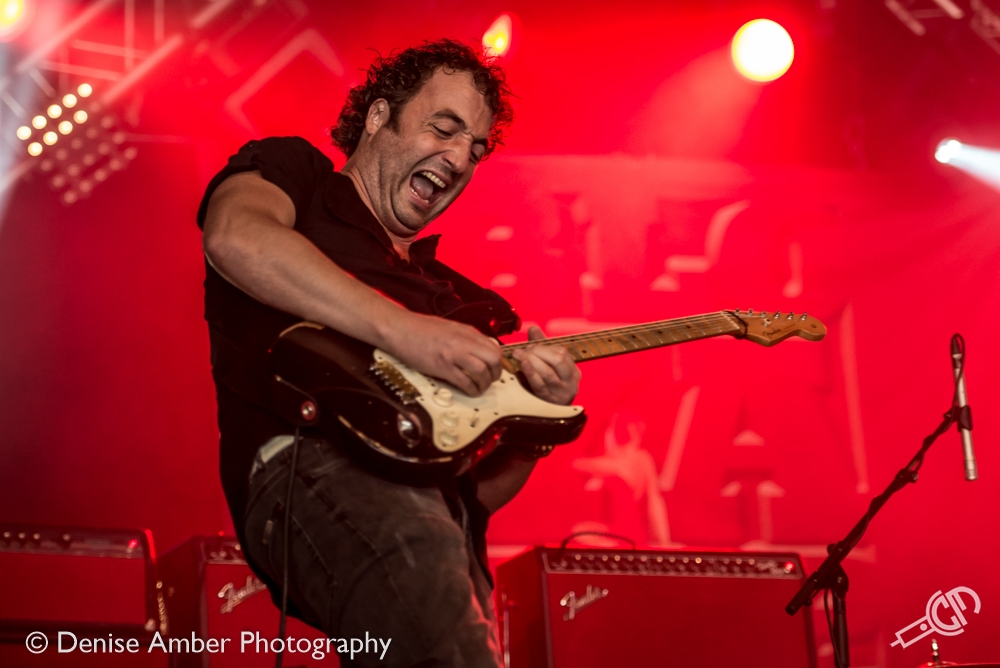 What sets you guys apart from the competition?
,,I think that our ear to ear smiles on stage affect people in positive way. I believe that is how we distinguish ourselves from many other bands; we are totally into what we are doing. And we are simply extremely talented and stubborn [laughs]. We also pay a lot of attention to the stage decoration. Our entire backline is painted red which creates a warm seventies feeling that really blends in with our sound. After all, red defines passion. I remember the guys from Y&T and their crew raving about our backline when we opened for them. By working very specifically with our amps we developed a unique live sound, which we were also able to capture on the new record. We also like adding visuals to our shows. At Bospop we had three female dancers in red dresses on stage and by the time the band kicked off the tent was packed with people. When we performed out on the street during National Record Store Day we hired an American old-timer to drop off our background singers. Our latest addition to the show is ‘Tankbabe’; a fine looking young lady and the main character in our new song ‘Tornado Sally’. She really knows how to rock the sheets and literally blows you away on stage with a specially designed instrument called a ’BloYaZooka’. Besides developing a cool live show we also invest a big part of our budget into video clips, some of which you can view by clicking on the link in this article”.

BLOYATOP; a power trio that brings melody and force together in dynamic songs.
Three honest and hard-working fellas who deserve a bigger audience. 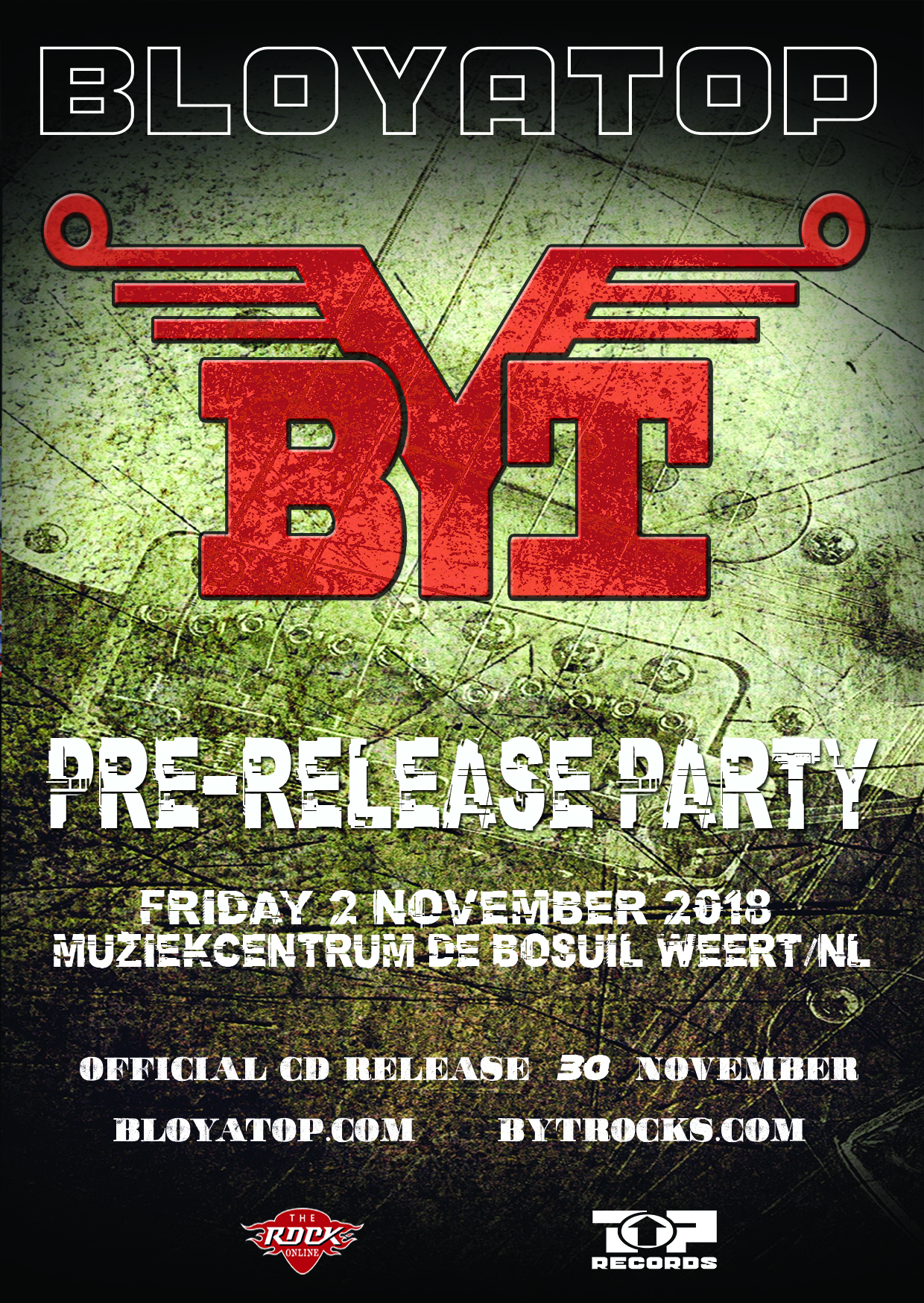 Friday November 2nd BloYaTop will perform at The Bosuil in Weert.
People who entered the crowd funding project will be handed out their copy of ‘Groove Control’ by the band. Also performing that night will be Robert Jon & The Wreck [USA].

Among the HBLS readers 3×2 free tickets will be given away for the cd release show in Weert. If you want to participate please email the answer to below question to info@bloyatop.com

How many bass guitars does Mr E use in the official video for ‘Catch Me If You Can’?