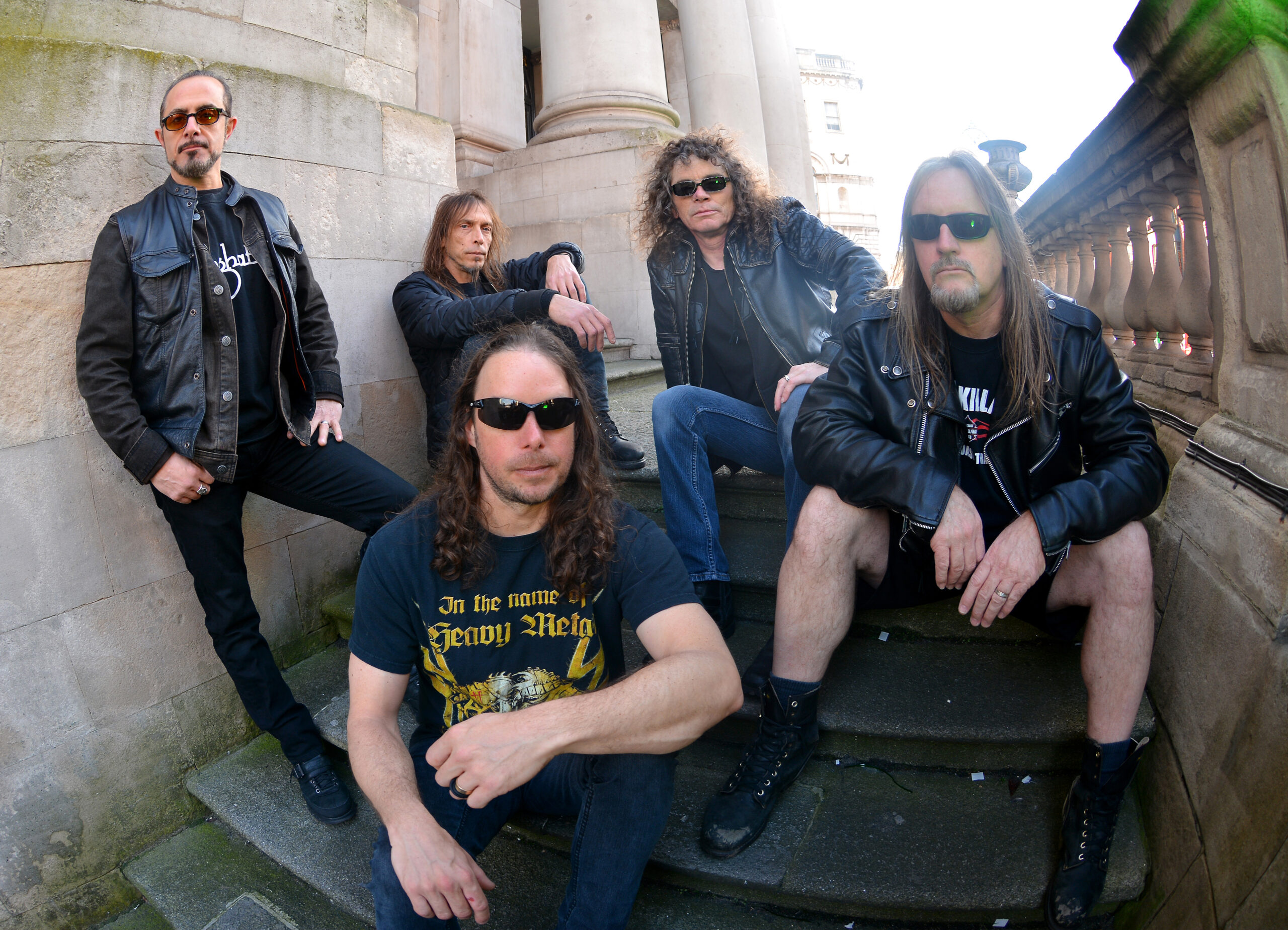 Overkill was founded in 1980 but it wasn’t until 1985 that they released their first full length album ‘Feel The Fire’ through Megaforce Records and became one of the frontrunners of the East Coast thrash scene. Over the years they have established themselves and with singer Bobby Ellsworth and bassist D.D. Verni as leaders they managed to still be around after more than 35 years. HeadBangers LifeStyle spoke with Bobby and among other things he told us the secret of a successful band. 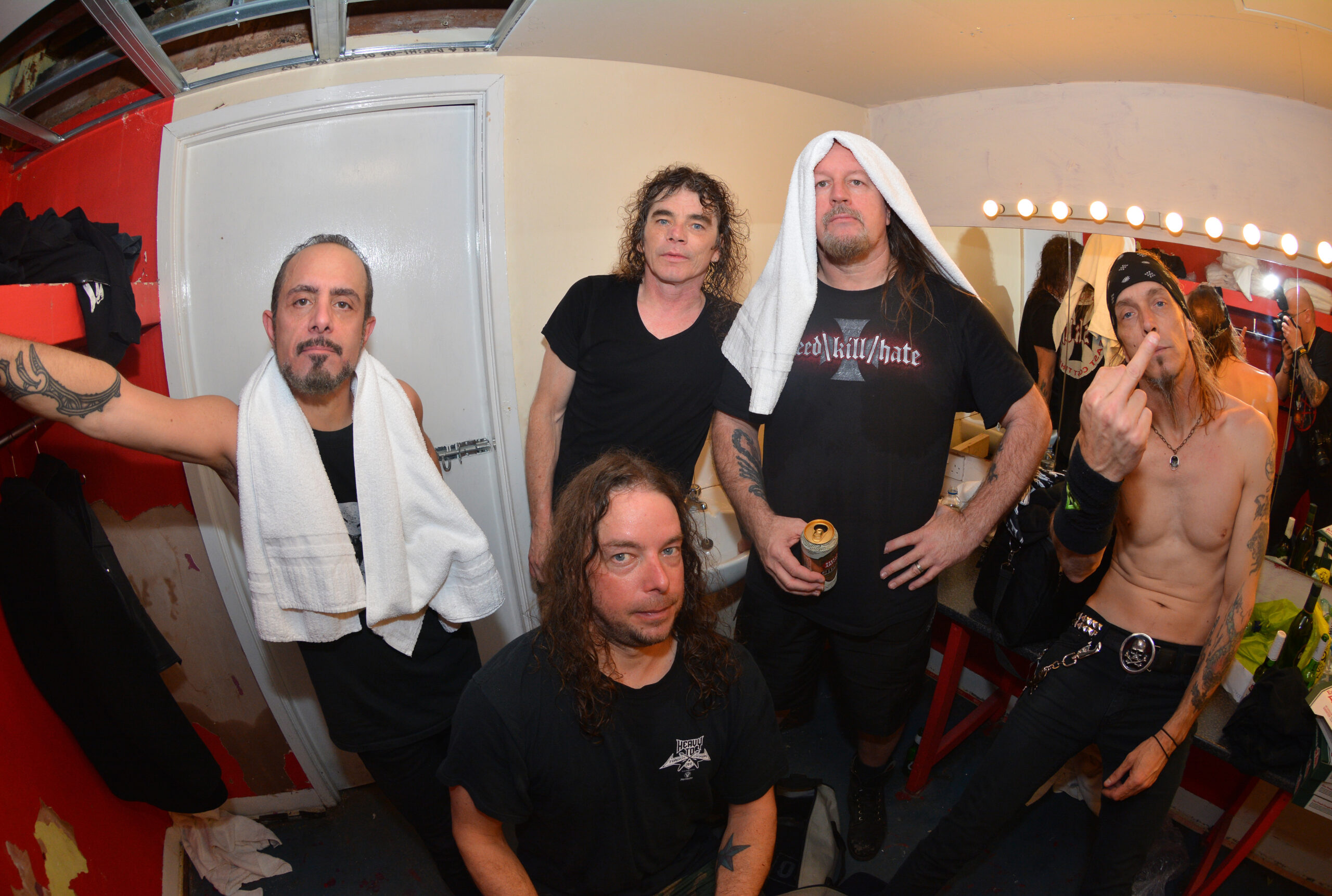 There are thirty years between ‘Feel The Fire’ and your latest album ‘White Devil Armory’. What was the plan when you started?
,,I don’t think you can plan 30 years. The plan took shape when the years passed but I think the plan when we started was to make some noise, be the heaviest. We were part of a scene that was creative and it was cool to be at the beginning of that thrash scene. But there was no rules so you didn’t know where you would go as the rules were made on the way as time went by. The plan still is something that is a day to day process and to change that would be wrong because it has been working for us for three decades.’’
Were there any examples for you? People you wanted to be like?
,,Of course there’s always people like that, but you also pick people you don’t wanna be like (laughs). When I got into the business, I could see it was a business of excess. I came in when record companies still had a great part of the markets financially and they were all living to excess. These were the glory days of strippers and cocaine. There were a lot of singers I emulated but also a lot I said I don’t wanna end up like this fuckin’ asshole so I was able to choose my own road. As far as singers go, I was always a Rob Halford fan but I was also a punk fan, so a combination between Stiv Bators, Joey Ramone, Rob Halford and Ozzy Osbourne, you mix that together and that’s me.’’
How was the music scene when you grew up?
,,We grew up around the New York area in New Jersey when the punk scene was exploding down the city. As teenagers we could see fantastic bands like Ramones, New York Dolls, The Heartbreakers, Iggy Pop was around and to be exposed to that where you’re still developing as a person it influences you. You mix that up with the New Wave Of British Heavy Metal and you kinda have Overkill as a result, which is cool to say, this really is our thing. We really got to experience walking on the same streets that the Ramones did in New York.’’ 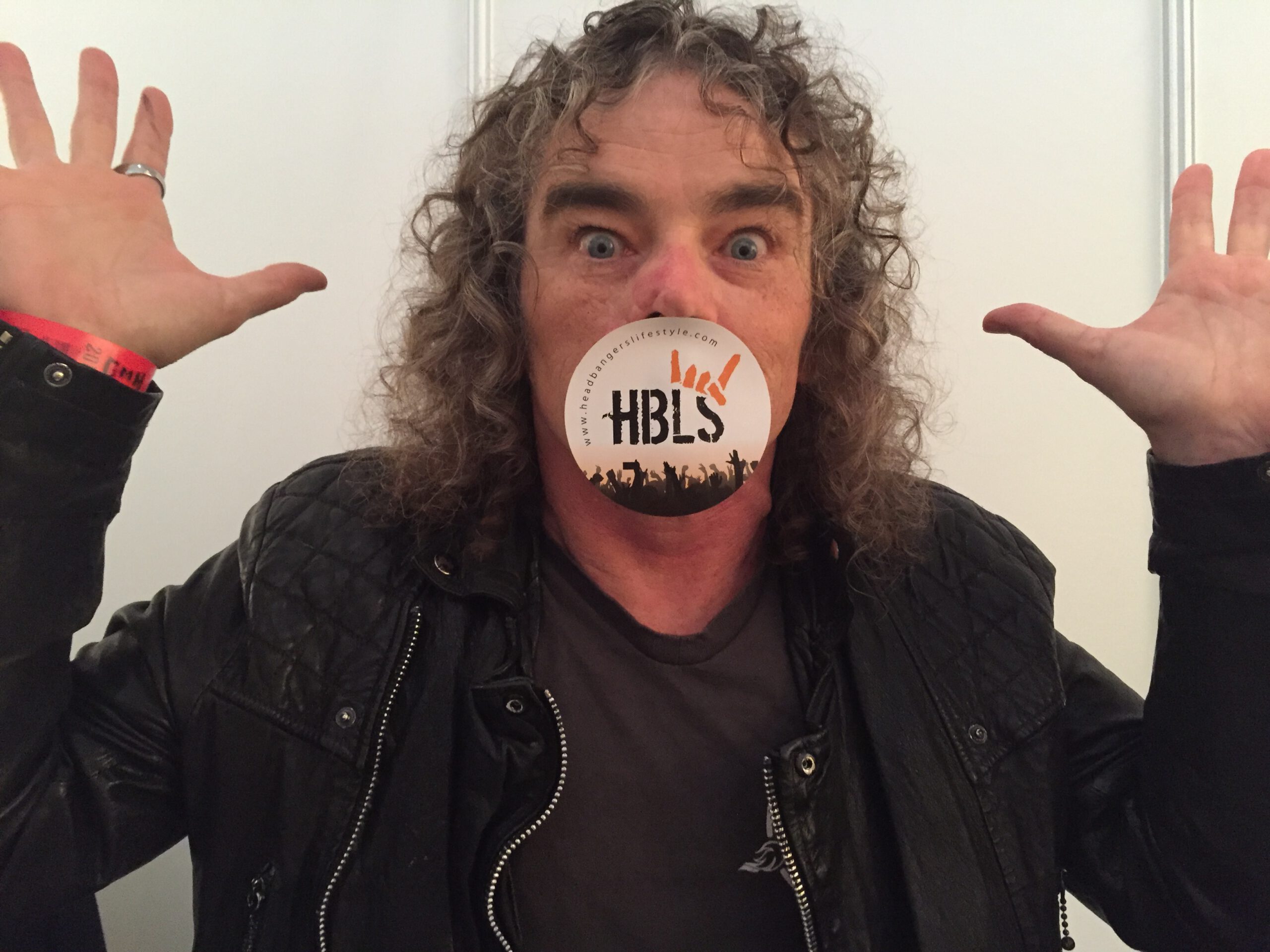 Did you ever have any doubts during your career?
,,There was never a question of not doing it. We would only be told we couldn’t do it, we never said that to ourselves. I did learn that I had to run the band like a business, so I’m running a business that I love with a partner that I trust. That’s how 35 years of relationship happens. I know this guy, D.D. Verni, longer than I know my wife. If you can have that trust with those principles that’s how it works. Running it as a business with the result doing something you love, the payoff is Graspop, it is Hellfest, the payoff is 35 years of avoiding manual fucking labour. I haven’t worked one day in my adult life, I rode motorcycles, drank beer in exotic places, fucking good (laughs).’’
When did you realize you had to become a musician?
,,That’s good. I remember my mother’s voice, singing for me before she spoke to me when I was still in the womb. She was a singer and made albums. From the womb to the cradle I was already in the position to be hearing first generation Irish tenors singing harmonies in my house which is a very nice way to start. And then it goes on to the broomstick in front of the mirror listening to Alice Cooper and Black Sabbath and then at 15 I heard Queen on ‘Sheer Heart Attack’ and everything changed. That was fucking unbelievable so it’s always been there.
I remember getting a record deal in 1984 as I went to university. I told my father, who was a great man and a lawyer, I was gonna leave the university and gonna take the deal and he said Bobby, all I want you to be is happy. But I think you should finish school first. I said dad, this is the only time the deal is gonna come and he said is this about girls and free beer? and I said of course not. 25 years later I took him to a very special baseball event and we were set up in a luxury booth in the stadium, my father puts his arm around me and says Bobby, I knew this Overkill thing would work out and I said to him Dad, when I left the university it was all about girls and free beer! (laughs), true story. So did I know? No I didn’t know but I did know I wanted something. I suppose in this 30 years formative period I’ve been with something that made me a pretty happy individual.’’ 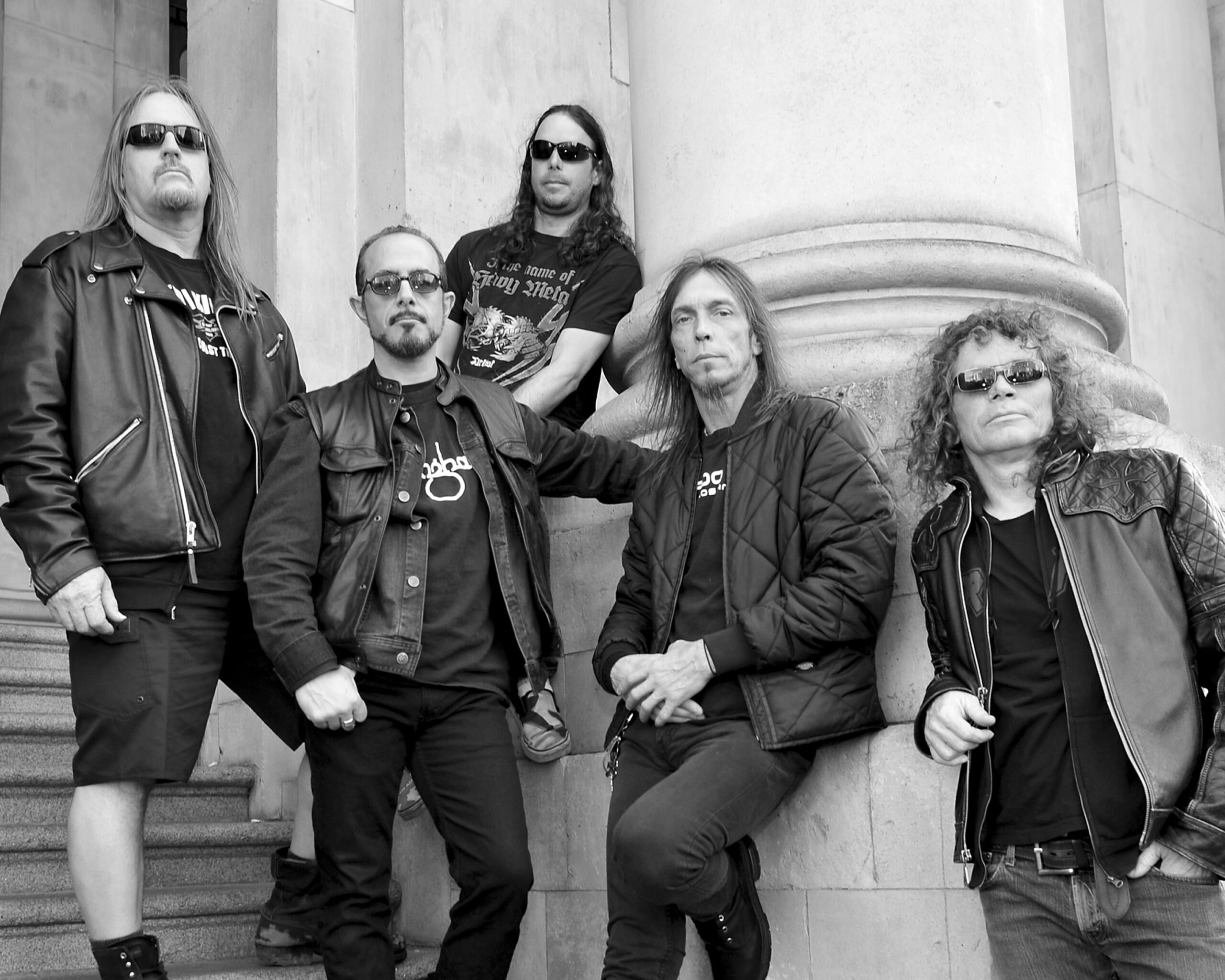 Do you see yourself as a role model for young musicians?
,,I don’t really, because I like to live my life and I think becoming a role model takes some of your freedom away. And I like to feel relevant, I rather think of them as competition because it keeps me sharper. If I think I’m relevant in 2016, if Overkill still can release ‘White Devil Armory’ in 2014 and have it be relevant to the day. As opposed to ‘weren’t they great?’ I’d like to hear ‘wow this is a defining moment in their career’. And I think it’s a mental trick to look at them as competition, I wanna bury them, you know, I spoke to the singer of a new band, an Irish kid, and we was talking about how you front a band and I said ‘at the end of the day I like you, but I want to put you six feet under, haha’. ‘I don’t want anybody to remember you when I left that fucking stage’ (laughs). And if I think that way, it gives us the opportunity to always have new trails and being a role model is not one of those trails.’’
Do you give young kids advice?
,,No way, We’re from New Jersey and my uncles told me you got to remember one thing, always keep your fucking mouth shut, hahaha (laughs). And we kept those words. It is a good way of thinking about it because you don’t want to give your secrets away either. I want to win! I’m in this to win not to lose. It’s all about still being relevant, being on stage and seeing 18 year old kids out there diggin’ this shit, that’s value.’’
But do they come to you for advice and what do you say?
,,Stop sucking my dick and let’s get on stage, no more asking (laughs). I try to avoid it.’’ 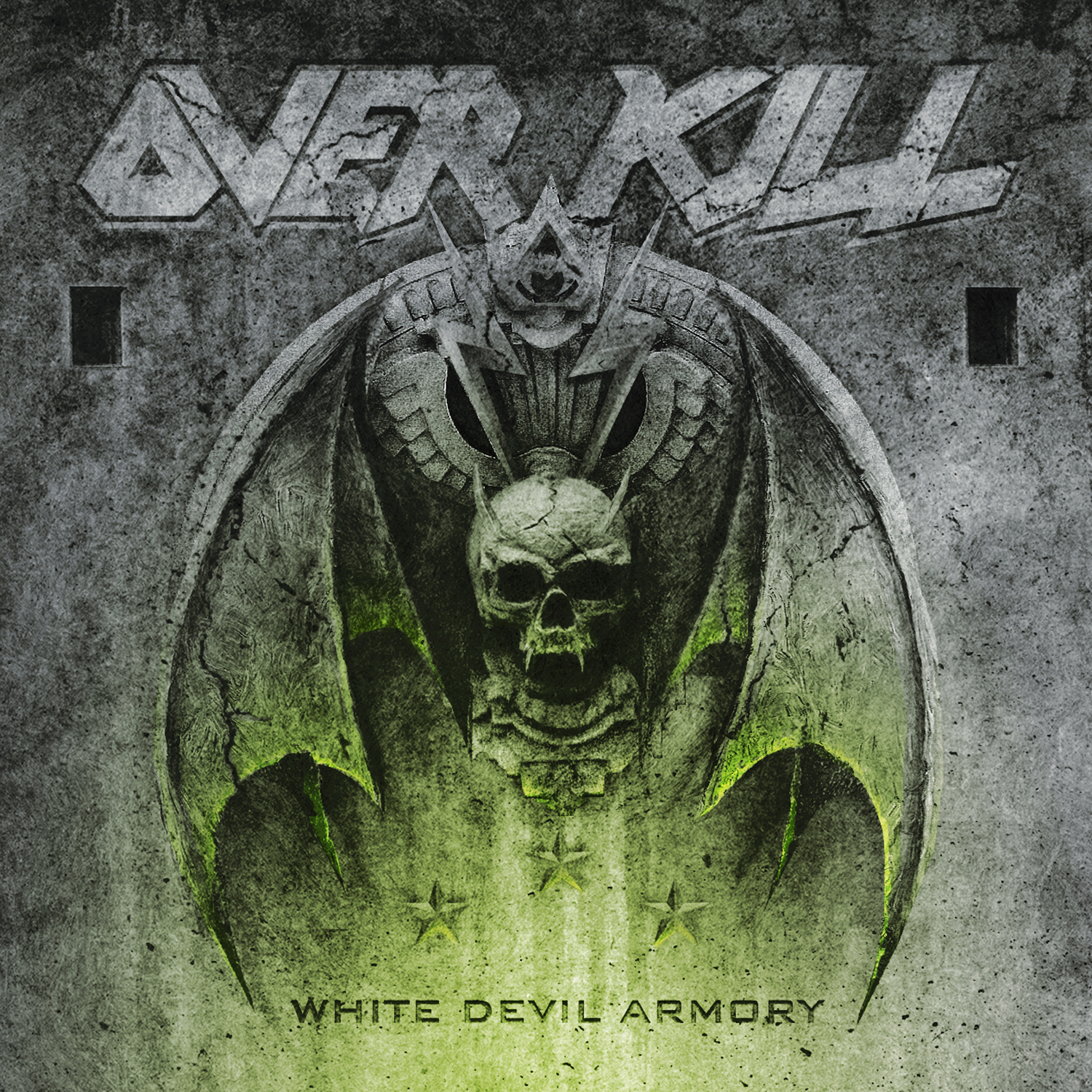 Overkill’s last album ‘White Devil Armory’ was released in 2014, isn’t it time for something new?
,,We are always working, I think it’s our work ethic so yes, something new is coming. The drums are done, guitars are finished, bass is done, I only have to do the singing and we are looking for a release in Europe during the last week of October. Create, promote, tour, it is a cycle.’’
And it is also part of this business.
,,Yes, the creative part is the void of the business. You plan for business and doing the business part is interesting. We present ourselves the way we want to be presented. Everything you see with Overkill passed my desk and D.D. Verni’s desk. Overkill is every aspect of my life and that’s cool, I wouldn’t have it any different.’’
What was the biggest mistake you made in your career?
,,I am not a great believer in making mistakes.’’
Let’s put it different then: when did you learn the most?
,,Probably during the darker days of metal. There was unpopularity, there was a following but it was underground between 1995/96 and 2004/05. During a ten year period metal was a dirty word in the music industry, it was passé and I learned the most then. We were one of the half a dozen bands that didn’t go home and live with our parents. We continued onwards, partly because we were stubborn but also because we understood how to reinvent ourselves. And I think by reinventing yourself and learning the business’ ins and outs, finding new companies to partner with, it gives you the opportunity to have fruitful days in those dark days and that’s when I learnt that all you need is reinvention in a current flow. When we started there was no internet so here was an old guy kinda figuring out how to reach companies in Sweden, New York and everywhere. But I learned it.’’
Is this direct contact the reason Overkill is still around?
,,We are handshaking people, we never been a band that have been unreachable. We are a band that were fans of the music before we were the band. To have that as the starting point makes the internet something that accentuates that and makes it bigger. The basis is for the people first, I don’t want to be reached out to by people I don’t like (laughs).’’ 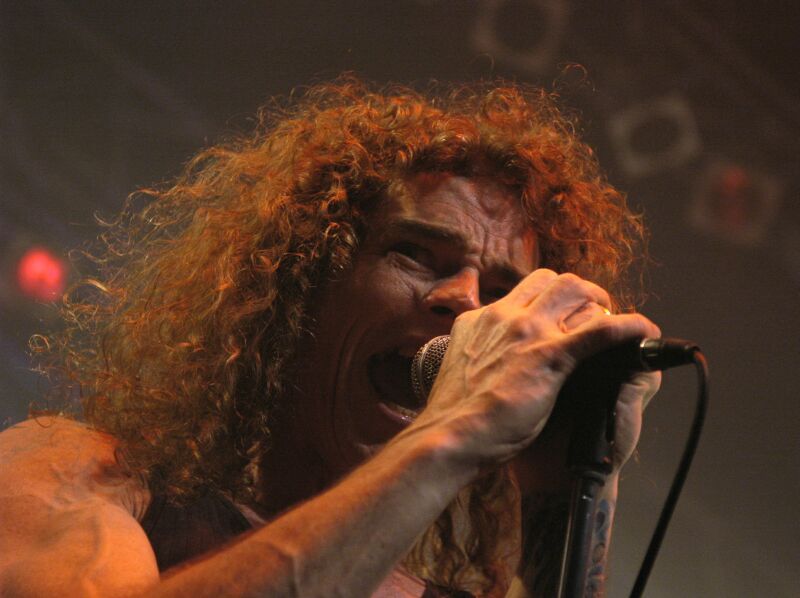 How would you like to be remembered?
,,As somebody who did it out of honesty as opposed to being an opportunist. Somebody once told me that the easiest way to get through problems is not to think about yourself as the centre of the universe but as part of that universe, but as a necessary part and when I think of the scene I think of myself as a necessary part of that scene and I like to be remembered that way. That I contributed something positive to it. That I made the machine run a little bit better while I was here.’’
—
Check out Overkill Official Facebook page and Overkill website