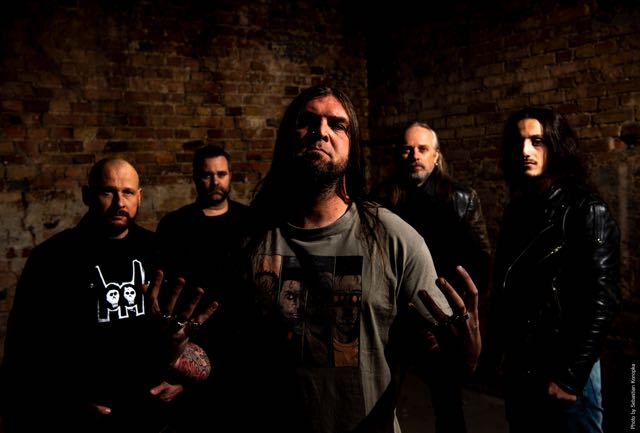 `Sodom is history for us' [Markus “Makka” Freiwald, drummer]

Drummer Markus “Makka” Freiwald and guitarist Bernd “Bernemann” Kost can be considered as pioneers of the German Thrash Metal scene, being part of that scene for over 35 years now. They have been on the payroll of well-known bands such as Despair, Angel Dust, Voodoo Cult, Kreator and of course Sodom. And it is that last band that stirred up quite the commotion, which lead to the formation of Makka’s and Bernemann’s new Thrash Metal home BONDED. The two musicians teamed up with guitarist Chris Tsitsis (ex-Suicidal Angels, Destroy Them), bass player Marc Hauschild and vocalist Ingo Bajonczak of Assassin and former frontman of New Damage, Supersoma and Lord Of Giant and feel very confident about the recently released debut `Rest In Violence’ via household label Century Media. HeadBangers LifeStyle’s Lilo asked Makka and Bernemann a few questions about their new Thrash Metal adventure.

,,Until today, we didn’t get an explanation about the decision of Tom. He never said anything about the reason why.’’-Makka

Is the split with Sodom early 2018 still a pain in the ass for you, or maybe a blessing after all, now that you have a cool new band?
M: ,,No, it never was a pain in the ass for us. Bernemann and I were a bit speechless after we received the message that we were fired, but we decided to keep going right away. We don’t think about the past anymore, we are just looking forward and try to get the best results out of it. BONDED is our new baby now and we are working hard to get the band as far as possible.’’

Does it bother you there are two versions of the split? And to clarify, what is the real reason for the split?
M: ,,It doesn’t bother us at all. Sodom is history for us. As I said before, we are just looking forward what will happen with BONDED in the future. Until today, we didn’t get an explanation about the decision of Tom. He never said anything about the reason why.’’

Was it a no-brainer you would start a new band a.s.a.p. after Sodom?
M: ,,It definitely wasn’t a no-brainer. It took us quite a long time to get the band together. We had many rehearsal sessions with many different singers but we couldn’t find the perfect solution until Ingo came into the game….. It was way easier to get Chris and Marc into the band. We know them such a long time and both are very good friends of us. There was no doubt that Marc and Chris get BONDED with us.’’ 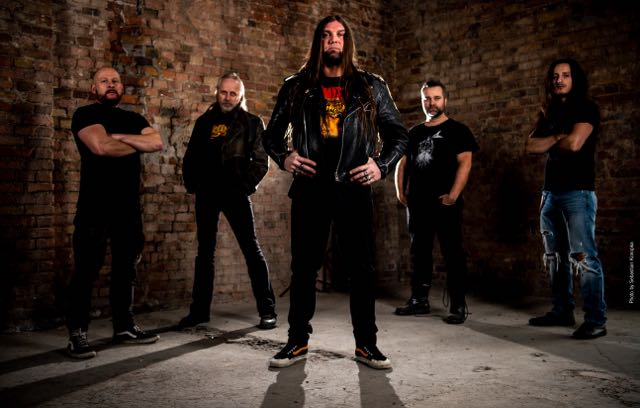 Have you considered taking the opportunity to explore a different musical style, or was it obvious you wanted to continue as a Thrash Metal band?
M: ,,We actually didn’t think about that. We just do what we love to do. Music always comes from your heart and you just let it flow. We grew up with thrash metal music and we never did anything else since 35 years now. It might be that we are going to change the musical direction one day, but so far we stay thrashy and keep going with intensive and fast thrash metal music as long as our bodies and minds let us do.’’

What makes you still excited playing Thrash Metal after all these years?
M: ,,The entire thrash metal scene and the music itself is what we love and this is what we grew up with. We are still thrash metal fans ourselves and that’s what keeps us excited about it… For me personally playing thrash metal drums is a kind of sport too. It helps a lot staying fresh and young, hahahahaha.’’

Did you feel confident or was it difficult to start all over again as a new band, especially businesswise? And what are for you the benefits of being an experienced musician, being long in the business?
M.: ,,I felt very confident and it wasn’t difficult at all to get along with the new situation. Businesswise we had to get used to it in the beginning, but it was way easier than I thought. All band members are quite experienced about the business and so we were able to bring all our knowledge together and use it as a unit.’’ 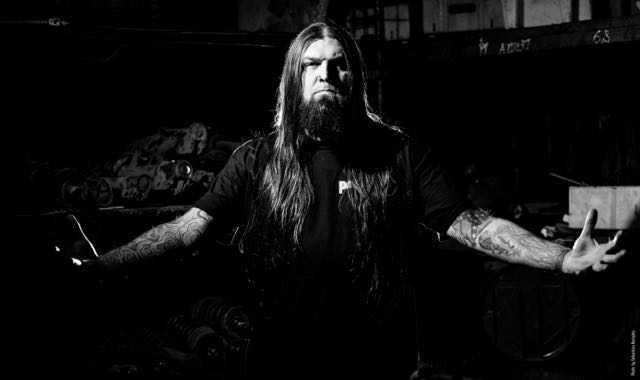 ,,The most important thing for us is the fact that we have fun when we are on stage or in the rehearsal room.’’-Makka

You could probably work with many musicians, what made you came up with this line up? And what do these guys bring to the table that is really important to you?
B: ,,Makka, Marc, Chris and I know each other for ages. As well our producer Corny is a buddy since a long time, like many others we´re working with. We needed some time to find the right singer with Ingo. We knew that his job could be the most important part in the band and we didn’t want a to make a compromise. A friend told us about him, we were immediately impressed by his expressive voice.’’
M: ,,The most important thing for us is the fact that we have fun when we are on stage or in the rehearsal room. The band doesn’t work very well when the fun factor is gone…… We are five good friends and love what we do and that’s what we bring to the table.’’

Did you use songs you wrote initially for Sodom on `Rest In Violence’? Or did you start with a blank canvas?
M: ,,When Bernemann and I left Sodom we were in the song writing process for the upcoming Sodom album already. The song ,,Suit Murderer” was already written, but Tom never listened to it. He wasn’t interested at all and ignored the new material which was written… In the end of the writing process for the BONDED album, we had more than 40 songs done.’’

How do you look back on the creative process of this album and what are the outstanding moments for you?
M: ,,For me it was amazing to see how fast and how creative we were during the writing and recording process. We wrote so many songs and brought a complete band together, recorded an album and played some live shows in a period of less than 2 years. The most outstanding moments for me personally were the drum recordings with my good old friend and producer Corny. It was very intense and hard for both of us, but the result was more than I ever expected.’’

,,Lyrically `Rest In Violence’ offers a wide variety of themes and topics – from personal experiences to socially critical topics.’’- Bernemann

The first pressing of the album features 12 songs. What will you do with the leftovers?
M: ,,We wrote a lot of songs and so we could be able to record a second album quite soon, but we have to listen to the leftovers first and then we are going to decide if the songs are good enough to be on the new album. It might be that we decide to write complete new material.’’

The title track features singer Bobby “Blitz” Ellsworth of Overkill and former Kreator bass player Christian “Speesy” Giesler. What is the story here?
B: ,,Speesy and Bobby are friends we know for a long time. It was Speesy who gave us the first call in January 2018 to join our band but due to the many Kreator shows it was impossible for him playing in both bands. Nevertheless he took the time to record one song for us. With Bobby, I met him after an Overkill show in Osnabrück in Germany last year and he asked about our new band. He offered us spontaneously to sing in the same song and you can imagine how happy I was in that moment. A few weeks later he send me the vocal files for ,,Rest In Violence’’ and he also added some lyrics and worked on the vocal arrangement. It blew us away. He´s a fantastic and authentic guy, we’re happy and proud to have him as a friend.’’

When it comes to the lyrics how different are they from Sodom for instance?
B: ,,Lyrically `Rest In Violence’ offers a wide variety of themes and topics – from personal experiences such as misery and despair in ,,The Outer Rim’’ or the free-to-interpret ,,Godgiven’’ to socially critical topics as in ,,Humanity On Sale’’, which deals with ruthless warmongers and the collateral damage they leave behind, or the striking ,,Je Suis Charlie’’ which speaks for itself. Tracks like ,,To Each His Own’’ and the virtually title track ,,Rest In Violence’’ – a song about oath bound triads and the dedication of the individual to a collective cause – are emblematic for BONDED´s music – aggressive, yet melodic Thrash Metal that will hit you with force where the imminent impact is inevitable. Sodom lyrics are more about war and that’s the main difference between Sodom and BONDED lyrics.’’ The album is produced and engineered by Cornelius Rambadt (Sodom, Disbelief, Onkel Tom). Why not working with a new producer?
B: ,,Makka and me already worked together with Corny, he produced the last Sodom long player `Decision Day’ and he absolutely did a great job. Our decision was quite simple to produce our new baby together with him. Especially because he became a good friend who worked in the past years as a part of the Sodom crew as well. We knew that he respects our ideas but always has some creative thoughts to add. Corny is old school and he takes care that his productions never sound too polished. With him we could work relaxed and effective in a familiar atmosphere, perfect.’’

How do you feel about the future of BONDED and what are the near future plans?
M: ,,So far we feel very well and comfortable. We have a very strong label and booking agency behind us. The line-up works brilliant and I think that we are a strong and intense, brutal live band. The next step will be to promote the album and play live as much as possible. We already started to write new material for the next album and that’s quite time consuming too… We never get bored, hahahahaha.’’ 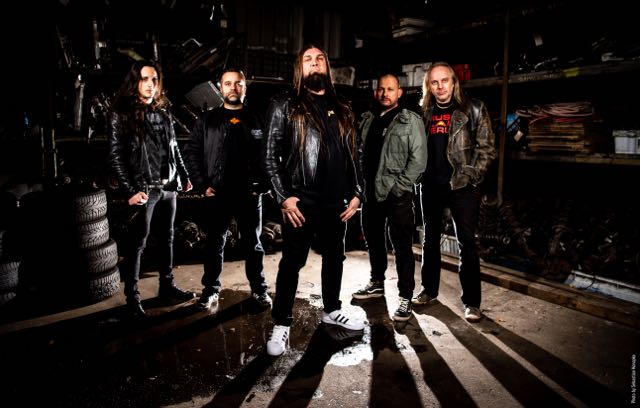 All photos are provided by Century Media.