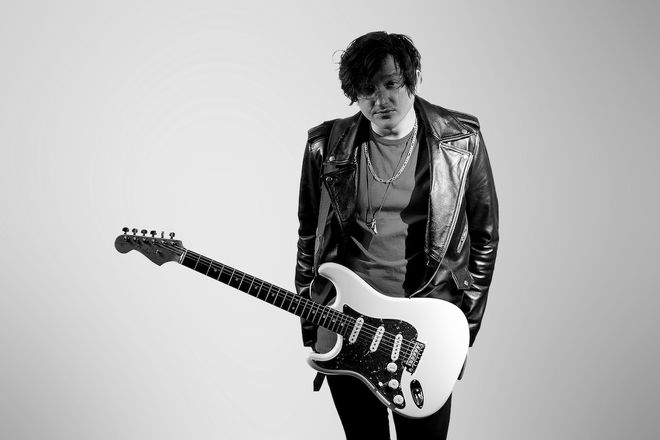 DD Allen is a young English singer-songwriter and an independent artist who present himself as a storyteller through his music. At first it were the loud decibels of AC/DC, Guns N’ Roses and Alice Cooper that had a strong hold on him before the singer/guitarist got settled in the heritage of true British rock ‘n roll. Starting to perform live somewhere in 2014, he quickly made an impact in the local scene, along the way he got noticed by various media, including BBC Radio and things seemed to go uphill from there. After releasing various digital singles, DD Allen and his band recently released the debut EP `Bad Love’ on which DD Allen presents a warm, comforting and honest sound spiced up with some old school rock ‘n roll. Sometimes I hear Bob Dylan, there is some Neil Young, but I gotta say the high pitched, clear voice of DD Allen even reminds me of exceptional and talented Jeff Buckley [r.i.p.]. When I decided to ask the man some questions, it quickly became clear to me it that for DD Allen it is all about the energy of the music, purity, giving the listeners something to paint their own pictures and the search for his signature sound. 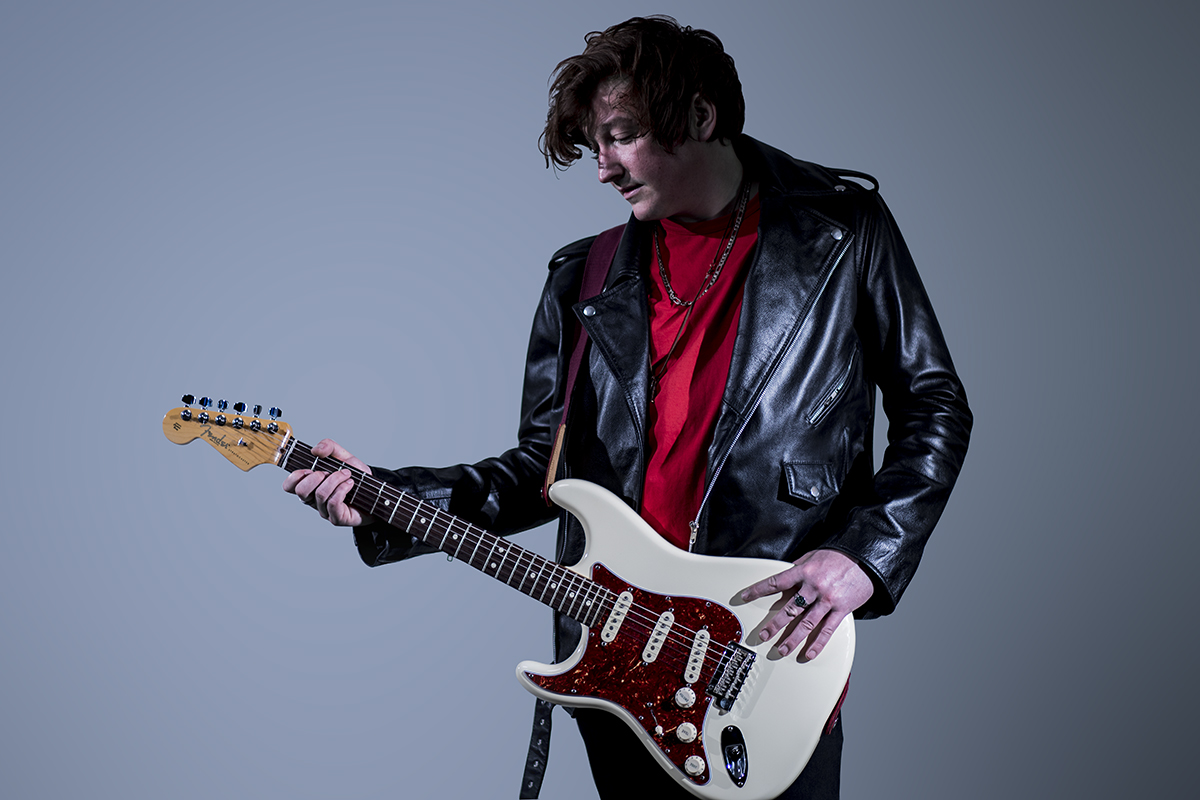 What kind of artist are you?
,,I’m a singer-songwriter with rock and roll in my bones.’’

Who are the musicians that surround you and in what way do they contribute to your creative outlet?
,,I’m lucky to play with great musicians. Alex Reed is an incredible bass player, he’s been with me for about 4 years. Alex is to me what Tony Garnier is to Bob Dylan. He’s my right-hand man when it comes to the drive behind the melodies.
Christian Evans played live on my first acoustic EP release show back in 2013. We’ve played loads of shows together and Chris has got a very distinctive sound. I mainly play rhythm now and Chris fills all the spaces I create for lead guitar.
Rich Walker is the 4th drummer I’ve played with. Not counting Dan Doyle who depped in Ireland and Holland. They all have a distinctive style and that’s the great thing about the kind of music we play. It doesn’t have to be exactly the same every time.
Will Sear is a magical keys player. He came out to Holland with us on the Vintage Trouble support shows. We’d been drinking at a bar and went into this incredible old piano shop in Haarlem. Will sat down at this £40,000 Steinway and started playing this solo to the tune of ,,Show Me A Little Mercy’’. It literally brought a tear to my eye. Mercy is our encore song and we start it off with Will’s intro now.’’

,,I wanted to give fans something they could relate to lyrically, but also get a kick off the energy.’’–DD Allen

You released your debut EP `Bad Love’ a couple of months ago. What was for you the biggest excitement of this release?
,,Hearing the two songs recorded, definitely. Every song I write goes through a journey so I’m hearing much more than just the song when the final version gets recorded. `Bad Love’ also represents a sound I’ve been searching out for a while. It’s exciting to have something I’m proud of now but can also take forward into the next chapter.’’ 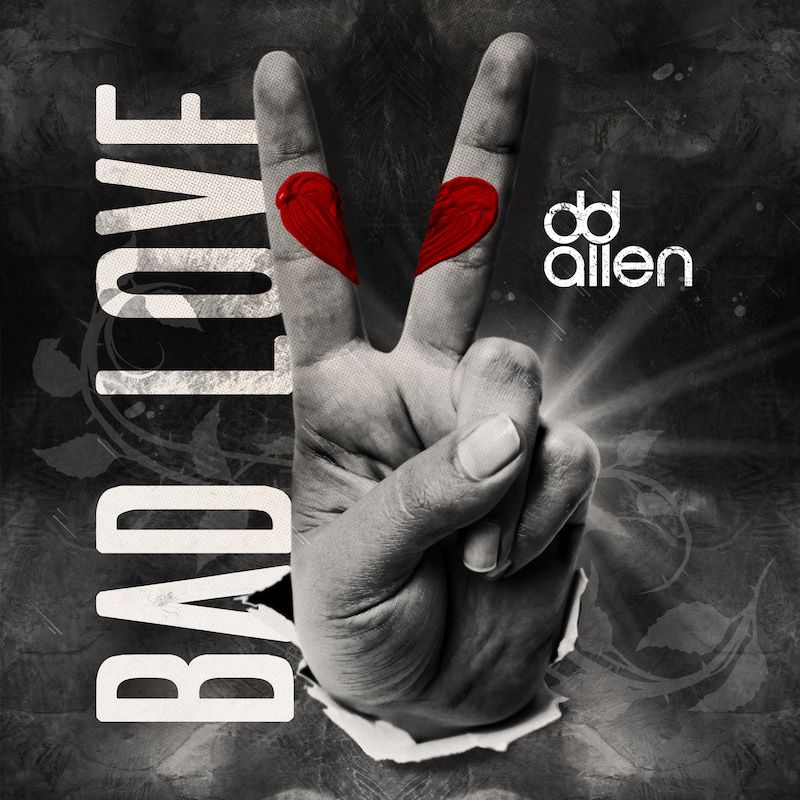 What are you offering music fans with this EP?
,,I wanted to give fans something they could relate to lyrically, but also get a kick off the energy. It’s the first time I’ve recorded songs that make your head start to nod, your legs start to move and your feet start to tap. I also wanted to make music that doesn’t lose anything when it’s played live.’’

What do you consider as your signature sound?
,,I call it heartland rock and roll. There’s a nod to America’s finest like early Springsteen, Neil Young and Tom Petty but there’s also a raw British rock and roll heartbeat like the Rolling Stones ‘Exile O Main Street’ period.’’

How important are lyrics for you and what are they representing?
,,The lyrics are the focus. My songs are stories. Sometimes they’re instantly relatable like the single ,,Bad Love’’, other times the lyrics are metaphoric. I write so listeners can paint their own pictures, create their own image out of the people and situations I write about. It’s a bit like reading a book. The thrill is you have no visual reference so everything’s in the imagination. But when you watch a film it’s all done for you. You don’t imagine, you just watch.’’

Being a young British musician you have really big shoes to fill, because there are so many legendary artists that already have put England on the map and paved the way?
,,Yeah, it’s incredible to think about how Britain has influenced genres, even created them. Bands like The Kinks, Led Zeppelin, Queen, The Rolling Stones, Pink Floyd, the list goes on and on. I don’t think any other nation has produced such a diverse range of rock musical styles. Not easy shoes to fill.’’ 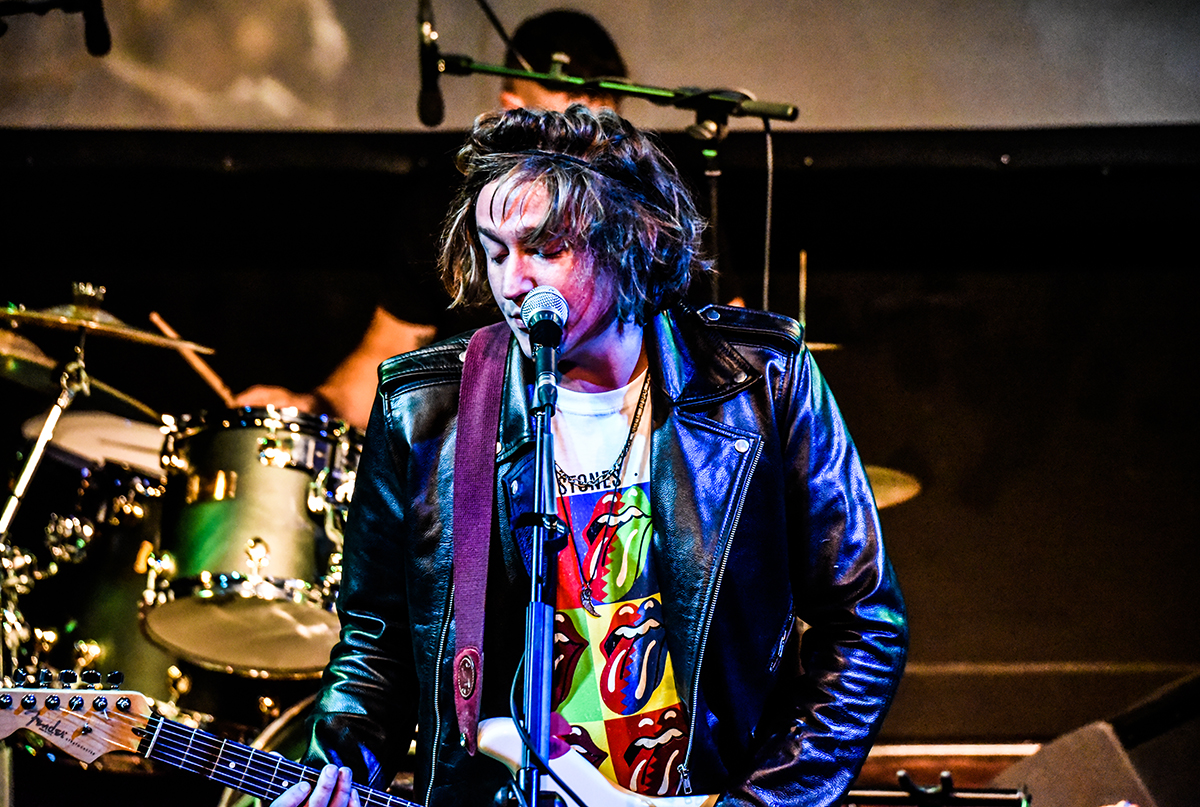 ,,I grew up obsessed with AC/DC, Guns N’ Roses and Alice Cooper.’’-DD Allen

What are your strongest aces you think you can impress the music scene with?
,,It’s the ultimate rock crossover music. A sound fit for modern times. The elements might have been done but nobody’s ever put it all together like this. Our fans are into every type of rock and alternative music. Some even like folk and Americana. It works in standing venues, seated venues and festivals. The age range is nuts as well. The youngest fan I know of is 7-years old. The oldest probably 70.’’

In what way do you feel connected with the rock and rock ‘n’ roll community?
,,As I said at the start: “It’s in your bones” — to quote Keith Richards. I grew up obsessed with AC/DC, Guns N’ Roses and Alice Cooper. I formed a rock covers band in 2013 to try and get paid, yet bizarrely, a year later I’d discovered Dylan and I was writing and performing as a solo acoustic artist. I snagged a support slot for James Blunt early on and played to 3,500 people at the BIC. It was an amazing show but I had a lot of energy trying to get out and ultimately I wanted to create a bigger sound. Shortly after I put a new band together I went to see AC/DC at the O2. The show just blew me away. Took me right back to my youth. I was never gonna play that hard but I knew I wanted to bring the same kind of energy into my music. That was a very special show. Now I’m back to my roots. Playing with driving bass and drum, a load of guitar licks, Hammond organ and keys. It feels like I’ve come full circle.

To which artist do you feel most related?
,,It’s difficult because there are so many artists that influence me in different ways. Vibe wise though, I’d probably say the rockier side of Ryan Adams.’’

,,Social media is pretty important but I admit I’m crap at it.’’-DD Allen

What do you want to achieve as an artist and how far would you go for success?
,,I want to prove that storytelling is great, guitar bands are cool, tour the world and make a living off of music.
How far would I go for success? Wherever it needs and whatever it takes.’’ 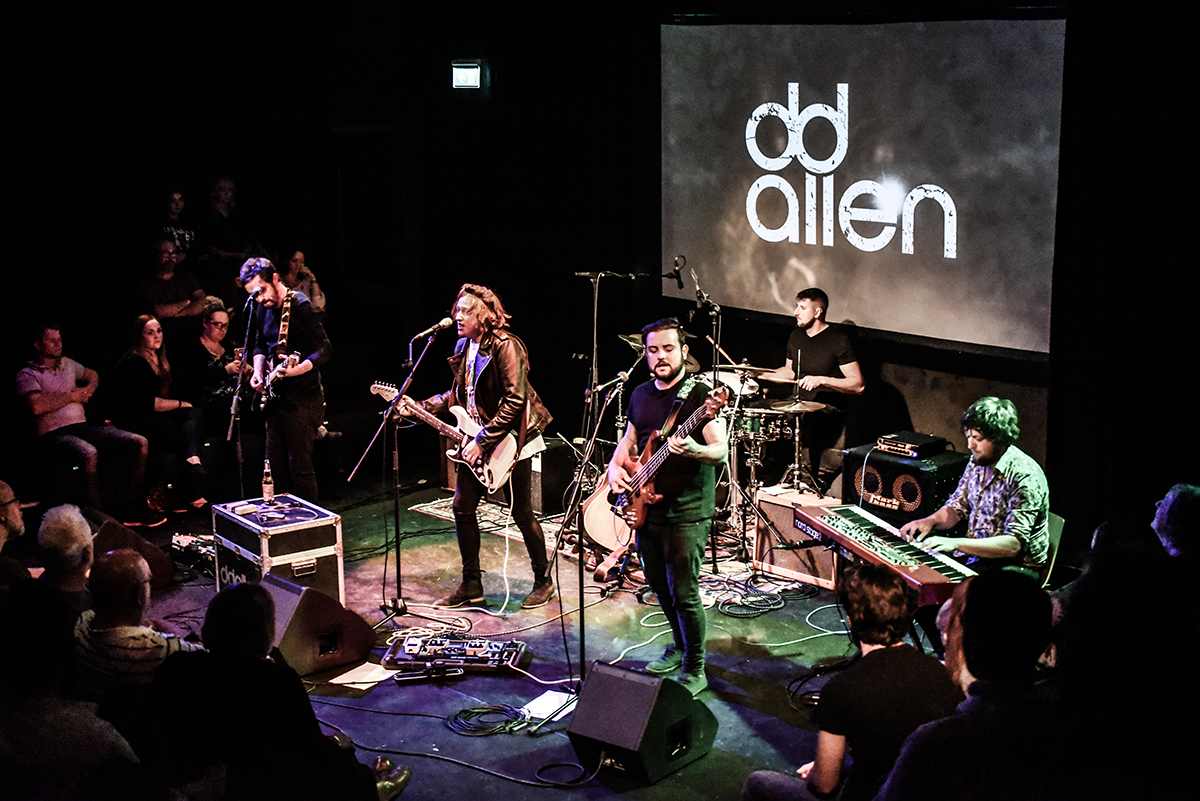 How important is social media and the Internet for the band and how do you use it?
,,I keep my website up to date and I make sure the lyrics are uploaded for every song. I’m planning to write articles on the meaning behind some of the songs. I’m always getting people second-guessing what some of the lyrics mean. They’re dying to know. Social media is pretty important but I admit I’m crap at it. The connection with the fans doesn’t seem as real to me as the interaction you get playing live. Nothing beats personal interaction, but I know social is important so I’m working at it.’’

What can people expect from a DD Allen live show?
,,Well, we’re not a mosh band and I don’t crowd surf. But the set’s pretty up-tempo and there’s a lot of energy. We recently tried a seated show as an experiment and sold-out. It was really cool. I put a couple of the more atmospheric songs in the set and the audience loved it. We got a 5-minute standing ovation.’’

How do you get your live shows, especially outside the UK?
,,It’s tough because we don’t have a booking agent. I keep an eye on bands I think we’re a fit for and if they are hitting the UK I’ll pitch the promoter or their manager. The shows in the Netherlands supporting Vintage Trouble happened a little differently. I’d previously pitched the agent to support Counting Crows but the tour got cancelled. A few months later I get a call asking if I can get the band to Holland with 10-days notice. Things like this are important. If you prove you’ll move mountains to make something happen you’ll never drop off the radar.’’ In what way you think BREXIT will hinder you as an artist?
,,I have no idea if I’m honest. But American, Australian and Japanese acts play regularly in Europe and they’re not part of the Union. I know there’s talk about a potential need for visas and tour carnets though. That’ll make playing in Europe more expensive but we’ll just have to manage it. Luckily, there aren’t any borders with Spotify and Apple so getting the music there won’t be any harder.’’

What do you consider your biggest achievement so far?
,,We’ve just played our first sold-out show at £9.50 a ticket. That’s a big achievement for an unsigned artist.’’ What is on the agenda for the upcoming months?
,,We’ll be announcing four UK gigs shortly. We’re already in pre-production for the new songs. And we’re getting approached a lot to play festivals. So hopefully, 2020 is going to be busy.’’ All photos provided by DD Allen