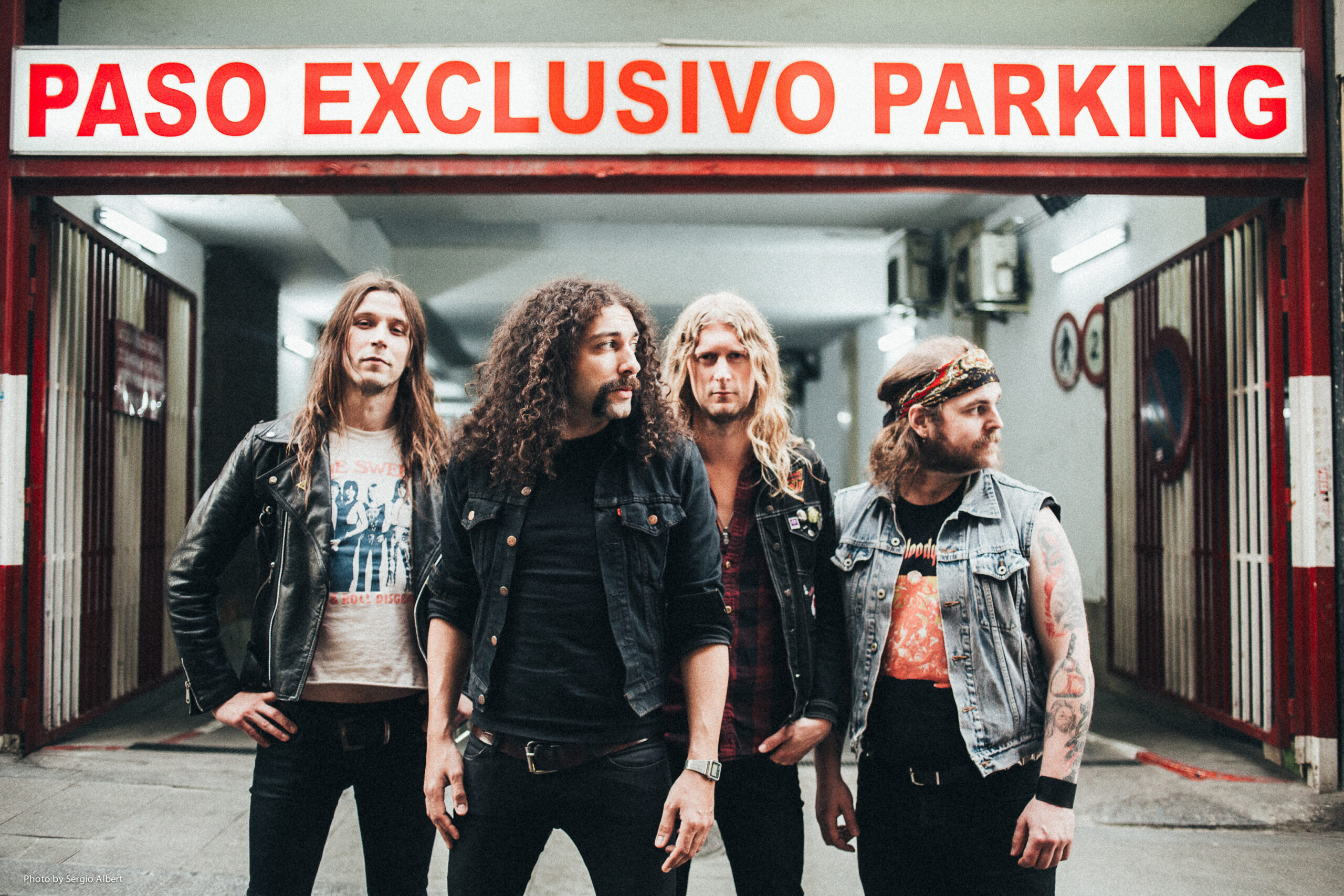 Dead Lord from Sweden was founded by guitarist/singer Hakim Krim. ‘In Ignorance We Trust’ is their third album and on it they perfected their seventies style hard rock. Krim introduces the band and talks about inspiration, the orange guy in America, goals and adulthood. 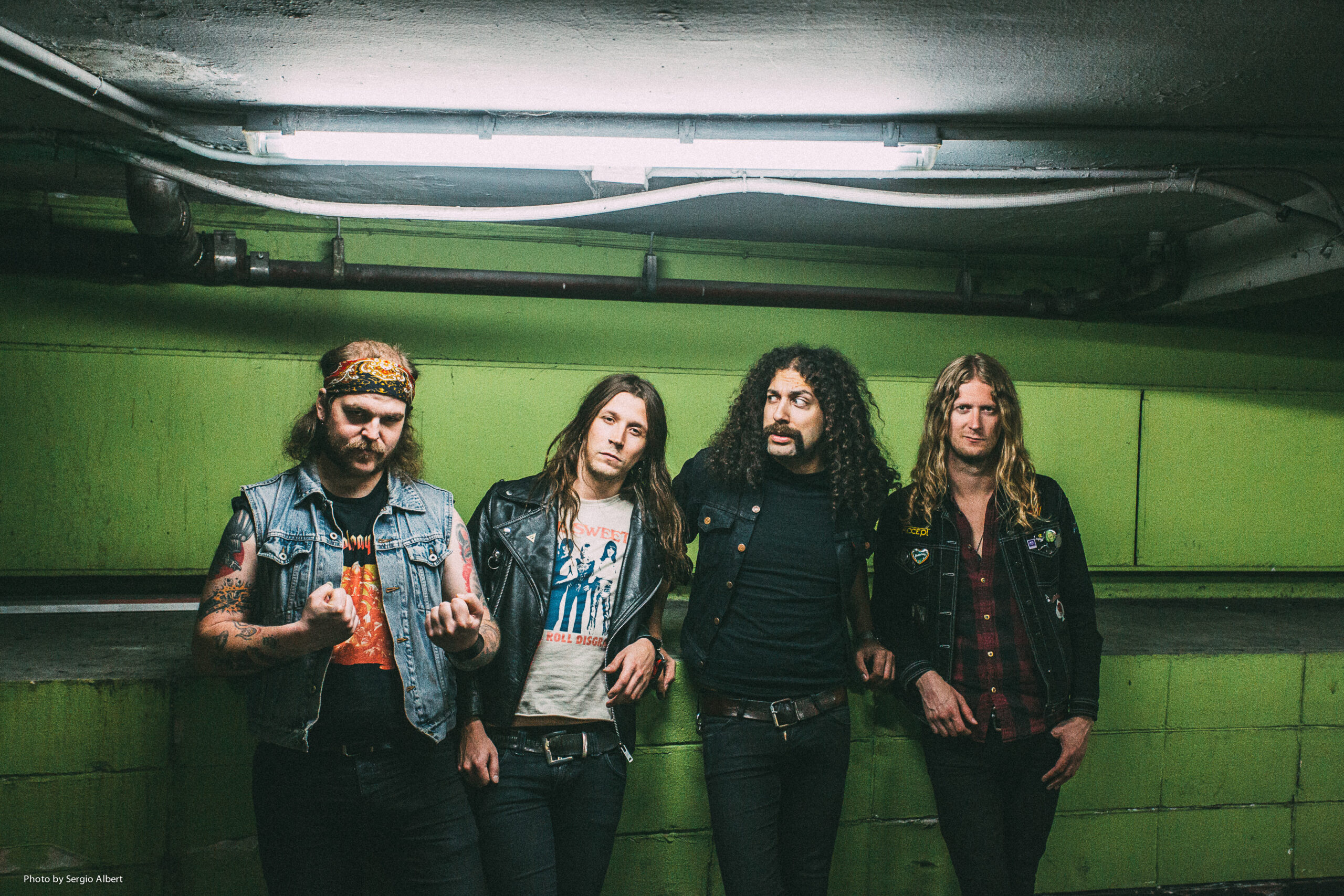 ‘In Ignorance We Trust’ is the third album. The first was recorded in Dublin, the second in Stockholm and this time you went to Madrid. Why?
,,Because of our producer Ola [Ersfjord]. He lives in Madrid so we went to his studio…and it’s nice to get away from Stockholm anyway, haha.’’

The band started in 2012. This is your third album already. In between you played a lot of live shows. How do the many live shows you’ve done show in the new songs?
,,I don’t know. Being a band made it easier to write songs. Nowadays I don’t even do demos, I just go to them and say ‘let’s try this’ and they bring in their ideas and we know we can trust each other’s musicianship. That’s a difference.  What struck me now, doing an album again, I had forgotten the feeling after 2 years of touring, is how much I liked recording and then being satisfied with it.’’

For most musicians the recording part isn’t their most favourite part of being in a band.
,,It is not my favourite thing either, being in a basement for ten days, but when you get in that creative process, recording everything live, usually apart from vocals and solo’s, it avoids becoming super boring because you are making music with friends instead of ‘tracking’ things.’’

Where do you get your lyrical inspiration from?
,,From hopeless things, things that bother me, the state of the world, stuff like that.’’

So you must have enough material for the next few albums now?
,,You know I had writer’s block for a year or so but as soon as that orange guy in America took up office in the Whitehouse my inspiration just skyrocketed. I kept writing songs about how bad everything is now and possibly taking a turn for the worse.’’ Dead Lord is labelled a ‘seventies rock band’. What makes that era such an interesting time?
,,I don’t know. I think up until the late 70’s early 80’s bands didn’t rely on production alone. Music in general had more of an honest grittiness to the sound and that is something I really like. Not to the extent that I try to copy that in our recordings but we try to have that same sort of thinking. That the groove is important and recording everybody at the same time really helps with that feeling. That’s it, we don’t do anything magical in the studio to let it sound ‘older’.’’

Who were your early influences?
,,I guess Metallica got me started play guitar, then I discovered Slayer and the heavy thrash stuff, eventually AC/DC and the less angry music. Once I found Kiss and Thin Lizzy and that kind of rock there were too many bands to keep track of. I also listen to a lot of soul and more mellow music like Jackson Browne, The Band, every good song is possibly an inspiration in some way although you don’t always hear it.’’

In what way can we hear it in your music then?
,,Mostly in songwriting I think. If I influence my rock music with some soul nobody will notice. All the different songs that I enjoy and listen to, unconsciously affect my way of writing because obviously you write from what you experience and hear.’’

When did you know you wanted to become a musician?
,,When I discovered what adulthood meant for many people. How they hate their lives, going to the same job every day, doing the same things, living in the same city they were born in. When I was 13 and started playing guitar I became anti everything. Which is tough, because you can’t really motivate it or sell it to your parents in a good way. They say you are lazy and that you should get a real job. I left school at an early age, chose music and moved away when I was 15. I could be found in a guitar shop all the time and the people in the big city were supportive. The adults in my hometown didn’t understand me at all.’’ 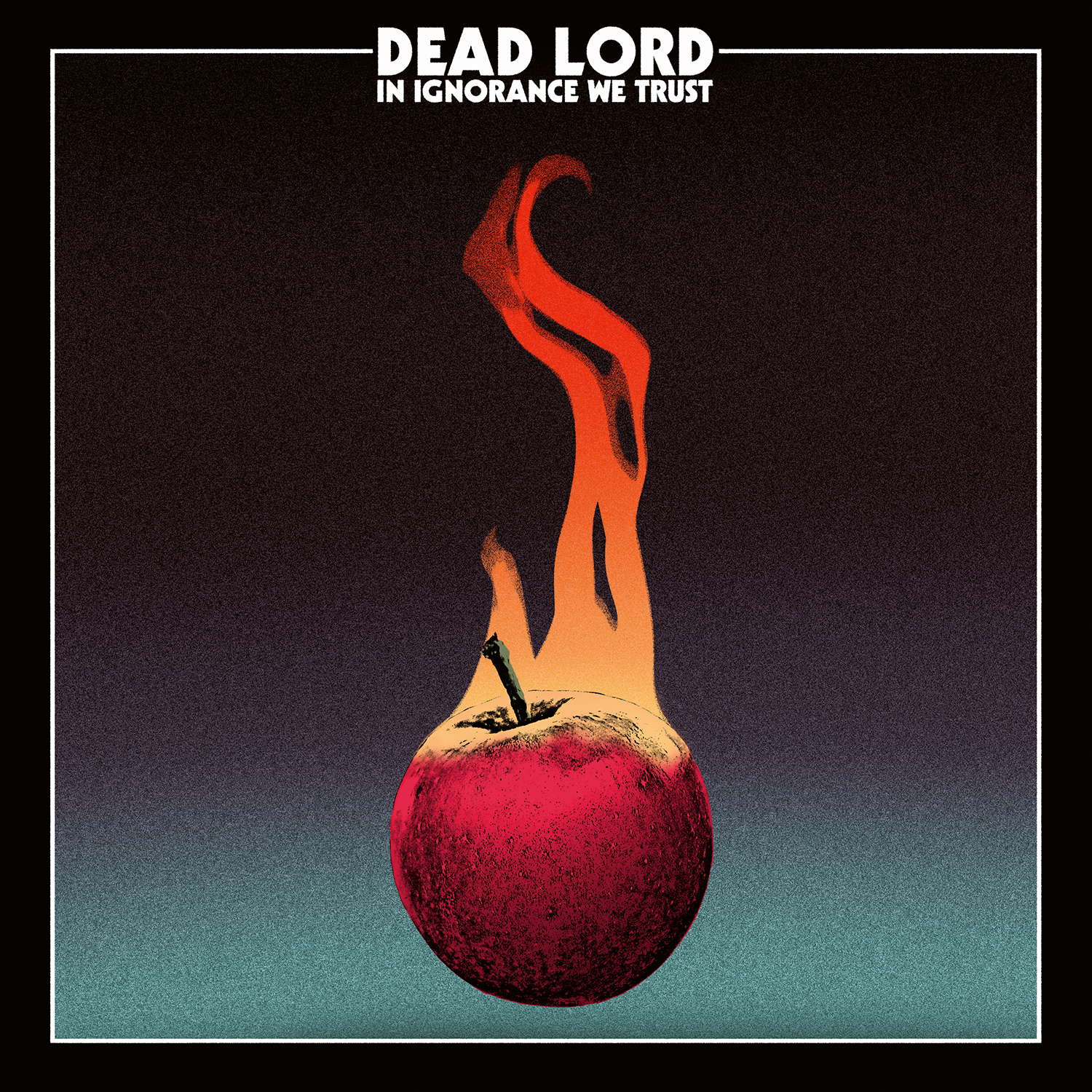 What would you have become if not a musician?
,,I’m into physics like crazy. Probably studying math because I discovered it as a grown-up and it is fascinating and comes in handy. I’m into aero planes as well so maybe getting a license and flying a rich dude around.’’

When do you consider a Dead Lord show a success?
,,When we are all soaked from sweat and the audience is too. You can tell when people are happy. It’s all about having a good time. Maybe not to the black metal guys but to me at least, haha. You feel the energy from the crowd and that is magic.’’

Did you have a clear vision or plan when you started the band?
,,No, not at all. I was 24 and just wanted to go to Stockholm and trying to do my own thing. But I understood it was important to have some sort concept. You need a sound, you need a logo and you need a complete concept for the band. All of us in the band are like comic book characters. There is a value to that too. I wanted Olle [Hedenström] to play guitar because he looks funny, and plays good. We all like Kiss, they are super heroes, you want people who are easily recognized and funny. I tried to find people who fitted that profile and I am happy with them.’’

Which song on the album are you most proud of?
,,,,They’’. We wrote it a few days before we went into the studio and I wrote most of the lyrics in the studio. I basically had the chorus and guitar parts and when it was done I was surprised how good it sounded. Still today it is my favourite song because it has nice melodies.’’

Did it change your look on songwriting? The fact you could walk into the studio with just a rough idea?
,,No, I usually pick up a guitar and hum a vocal line along with the chords I want and that is my song. Sometimes I have a phrase as well, but most of the time it is the vocal melodies against the chords that is my idea of the song. In the rehearsal room we try to make a song out of it. That is our usual way of writing. Making it up this time was because I simply wasn’t prepared.’’

What is the last thing you do before you go on stage?
,,Make sure my fly is up, haha. I walked on stage once and I saw my fly was down, didn’t look good, haha.’’ 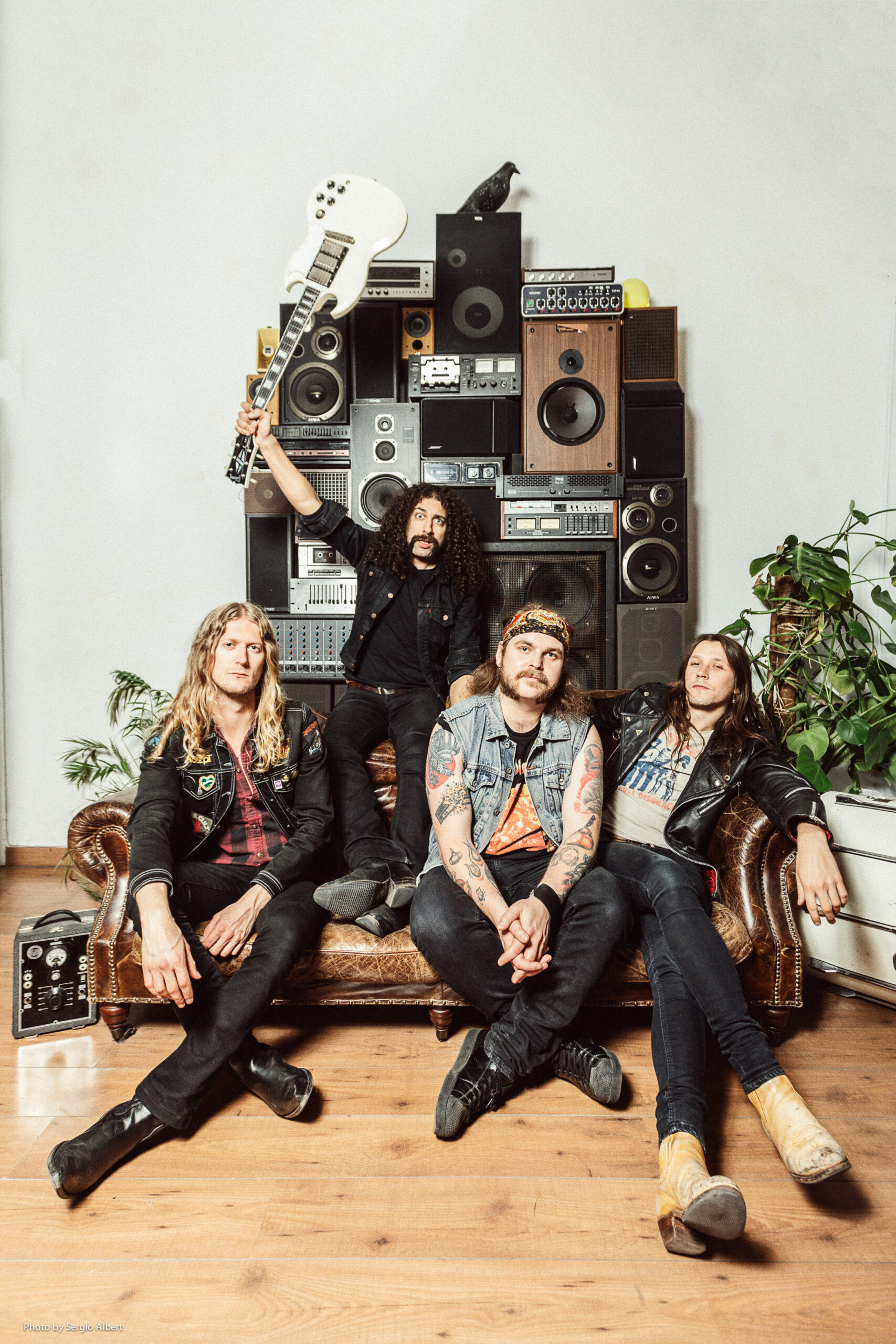 Is there something like a special item or good luck charm you have to take with you on tour?
,,No, but we always have on our rider that there must be a photo of Nigel Tufnel of Spinal Tap and when I have it I bring it with me on stage and put it next to my pedal board on the floor. He just gives me that extra push over the edge. I have many of these photos hanging in my home.’’

What is your ultimate goal with Dead Lord?
,,Having fun and not regretting how I spent my life when I’m older. Maybe in the meantime making people happy and think about what we sing about, that is the main goal.’’

What would be your advice to a young kid who wants to become a musician?
,,Practice your instrument before you think it’s cool to go out and drink, act and do weird stuff. Don’t read Mötley Crüe’s book and act like them. Once you played guitar eight hours a day for nine years then you can think about doing the other things. In order to have a band that actually works you have to be a bit smart and talk with people. Networking is the key to everything…and don’t be an asshole.’’

What are the plans for Dead Lord?
We start with a short European run with Imperial State Electric because I think they are Sweden’s best band. Then further with our own run bringing Night along and keep on playing, South America next spring. We will probably be out for 2 years playing as much as we can.’’

And in the meantime working on new material?
,,Mmm, that’s weird, as soon as we book a studio I get into songwriting again. There are months I don’t even write one song, simply because I don’t have to. I don’t like it but it seems I need the pressure of the last minute.’’
—
Check out DEAD LORD’s official website and Facebook page