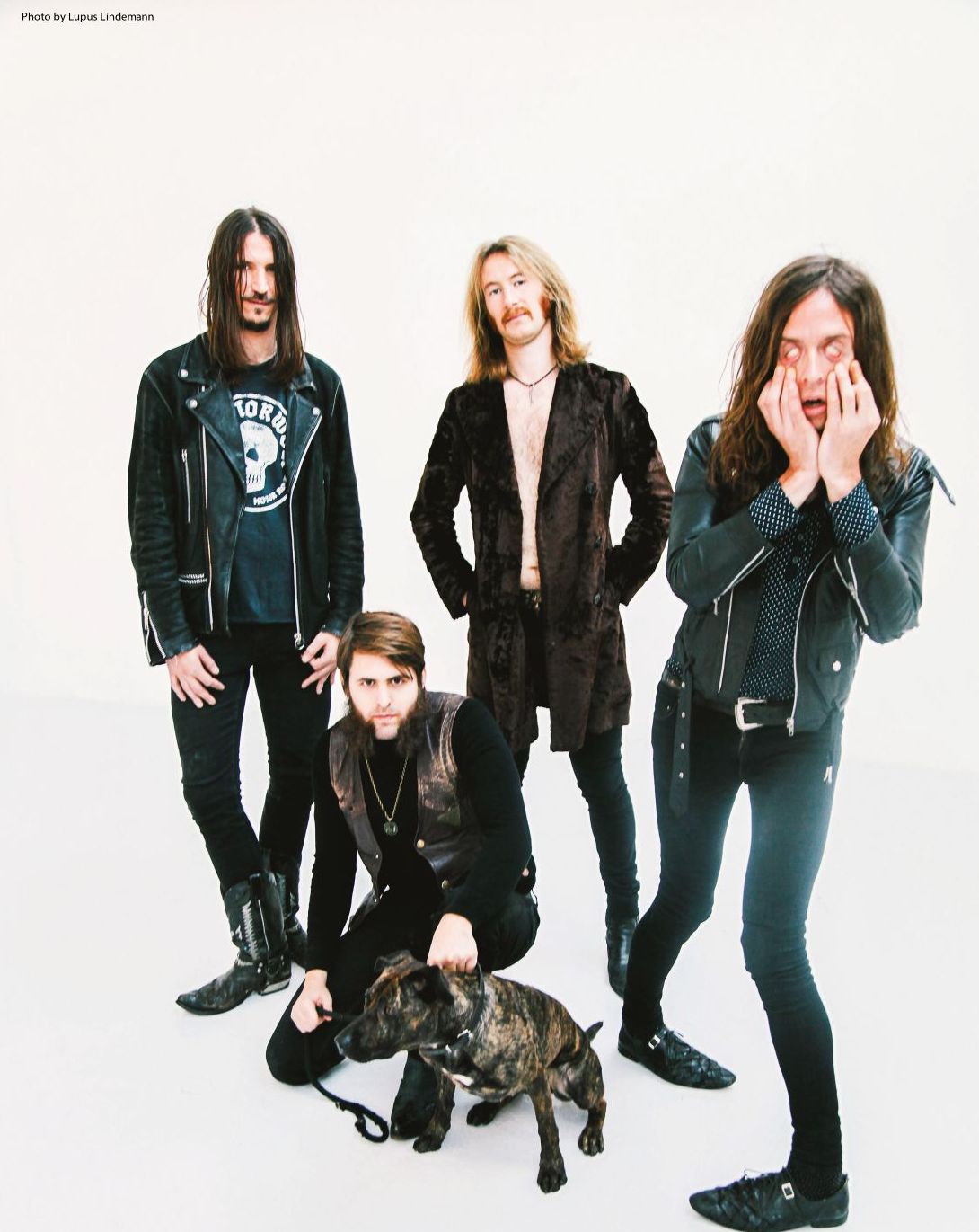 A Musical Melting Pot From The Netherlands

Death Alley is a Dutch band originally from Amsterdam but meanwhile having a Swedish drummer. They are a continuation of punk band ‘Gewapend Beton’, which they started in 2003 when the guys were still teenagers. Singer Douwe Truijens, guitarist Oeds Beydals and their former drummer Ming Boyer, as the founding members, changed the name of the band to Death Alley in 2013 and for good reasons as singer Douwe tells HeadBangers Lifestyle. 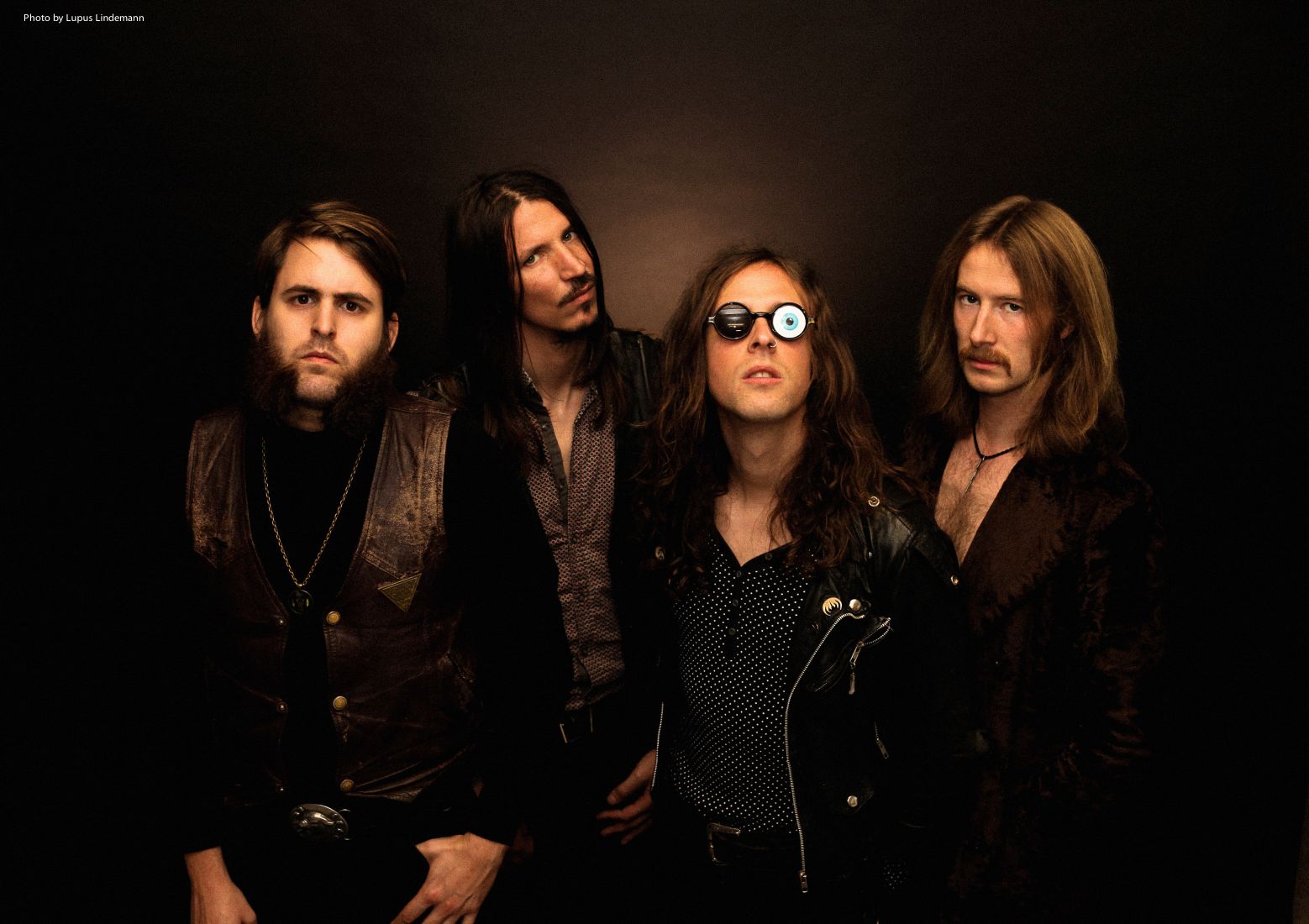 After 10 years playing the Dutch punk scene it was time to change the name because they moved forward in a different musical direction. In 2015 they released their first album ‘Black Magick Boogieland’, played many shows with for example Kadaver, The Shrine and in 2016 they changed half the line-up. With a new bass player [Sander Bus] and drummer [Uno Bruniusson] they continued and earlier this year they released ‘Superbia’ an album that could be described as Hawkwind meets Motörhead and the style as psychedelic rock ‘n’ roll.
Singer Douwe thinks they made the only step possible. ,,We reached the borders of the genre and couldn’t stretch it any further. We played 10 years in a punk band and included different influences. For us that was okay because it kept us sharp but it wasn’t really popular with the fans so we had to make a decision. It really was a no-brainer to continue together. With a new name we started with a clean slate and the freedom we needed. We still have the sharp edges from bands like Bad Brains but also the psychedelic trips that we love from Hawkwind and King Crimson. The name Death Alley comes from an album by American hardcore punk band Zeke to which we listened a lot and it just sounded cool.’’

Musically Death Alley is evolving; which comes naturally.
,,We’re not really talking about that. We are together a lot and try to widen our musical spectrum. The basics are heavy rock ‘n’ roll but other than that it can go in all directions. The freedom we have is inspiring and prevents us from becoming a slave of our own direction. Also the new blood [Bus and Bruniusson] brought new influences so we can stretch out now which is cool. The core of our fans goes along with it because we see familiar faces in the crowd. We are glad we made a step forward but it is still connected with the first album ‘Black Magick Boogieland’ and so the audience stays with us.’’

Did the way of writing change?
,,Everybody has his own instrument, that hasn’t changed but everybody brings in more than his own thing because we are such an inspired group of people. Oeds comes up with most riffs but there is seldom a finished song, it’s mostly basic ideas and while jamming together it progresses.’’ 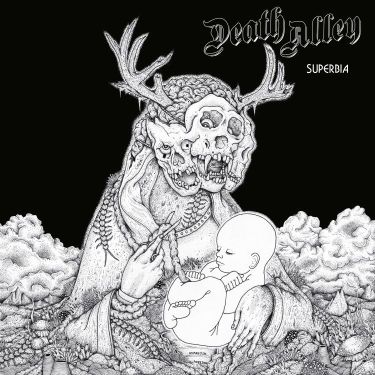 The album sounds very live and there are some pretty long tracks on it. How do you stay focused?
,,The producer can be a big help there. If you’re allowed to jam it must stay interesting and exciting for yourself as well as for the listener. You should not over think it too much but just enjoy the energy. ,,The Sewage’’ for example had three versions with different lengths and live it comes out different every time. You need to trust that it works out and that is cool.’’

Does the fact that you all have so many ideas make writing easy or difficult?
,,This is how we do it, from idea to song and it goes smooth. The longer the new line-up is together, the easier it becomes. There is a great chemistry between the four of us. Some songs are put aside and picked up again later. For this record Oeds and I went to a country house on Corsica together; and with a basic recorder we made the whole structure. When we came back we worked on it all together.’’ 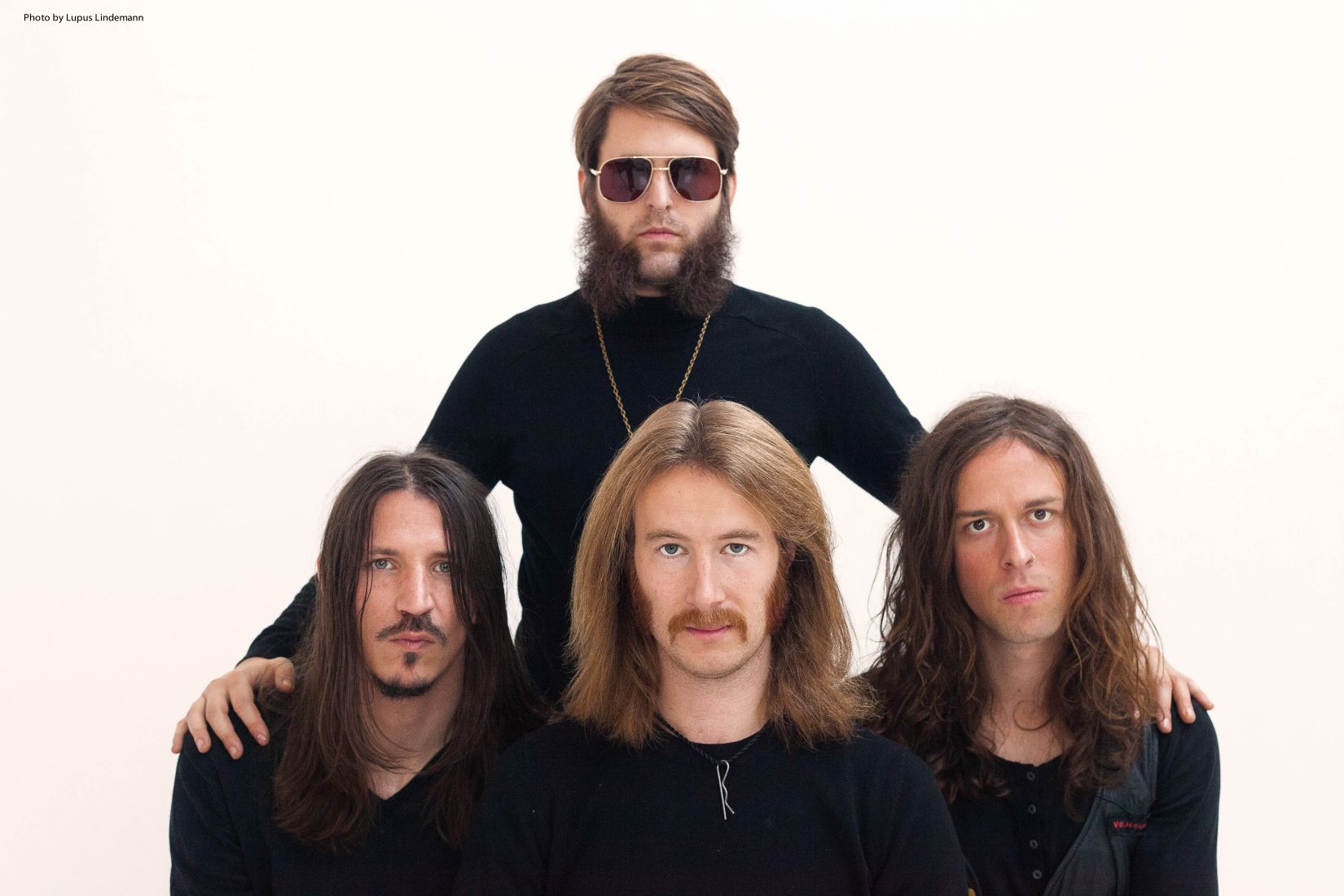 The album is produced by Pieter ‘Pidah’ Kloos [Motorpsycho, Dool]. What makes him the perfect producer?
,,We really trust him. We’ve recorded with him before, we know his work so when he suggests doing something a certain way we don’t question that. He has an idea of how the finished product should be and he gives his opinion about arrangements or takes. Sometimes when you’re working so intensive you don’t see it clearly anymore and feedback is fantastic.’’

‘Superbia’ is released on Century Media Records. How did that happen?
,,Two guys heard a few demos, came to a show and afterwards we talked and it clicked on a personal level. That was important for us because it is nice to be on a great label but if it doesn’t work on a personal level it’s not going to work at all. We were free to do what we wanted and they were helpful. The album was too long for one vinyl disc so it didn’t fit but we wanted all the songs on it. They said it was a bit unusual but now it is 3 sides of music on 2 LP’s. The creative process is very important and we like that.’’

Who are your influences as a singer?
,,Back in the days in my punk era it was Johnny Rotten, H.R. [Bad Brains], Jerry A Lang [Poison Idea], later on there were Ozzy, Lemmy, Bobby Liebling [Pentagram] and Guy Tavares of Orange Sunshine; a band from The Hague [NL].’’ 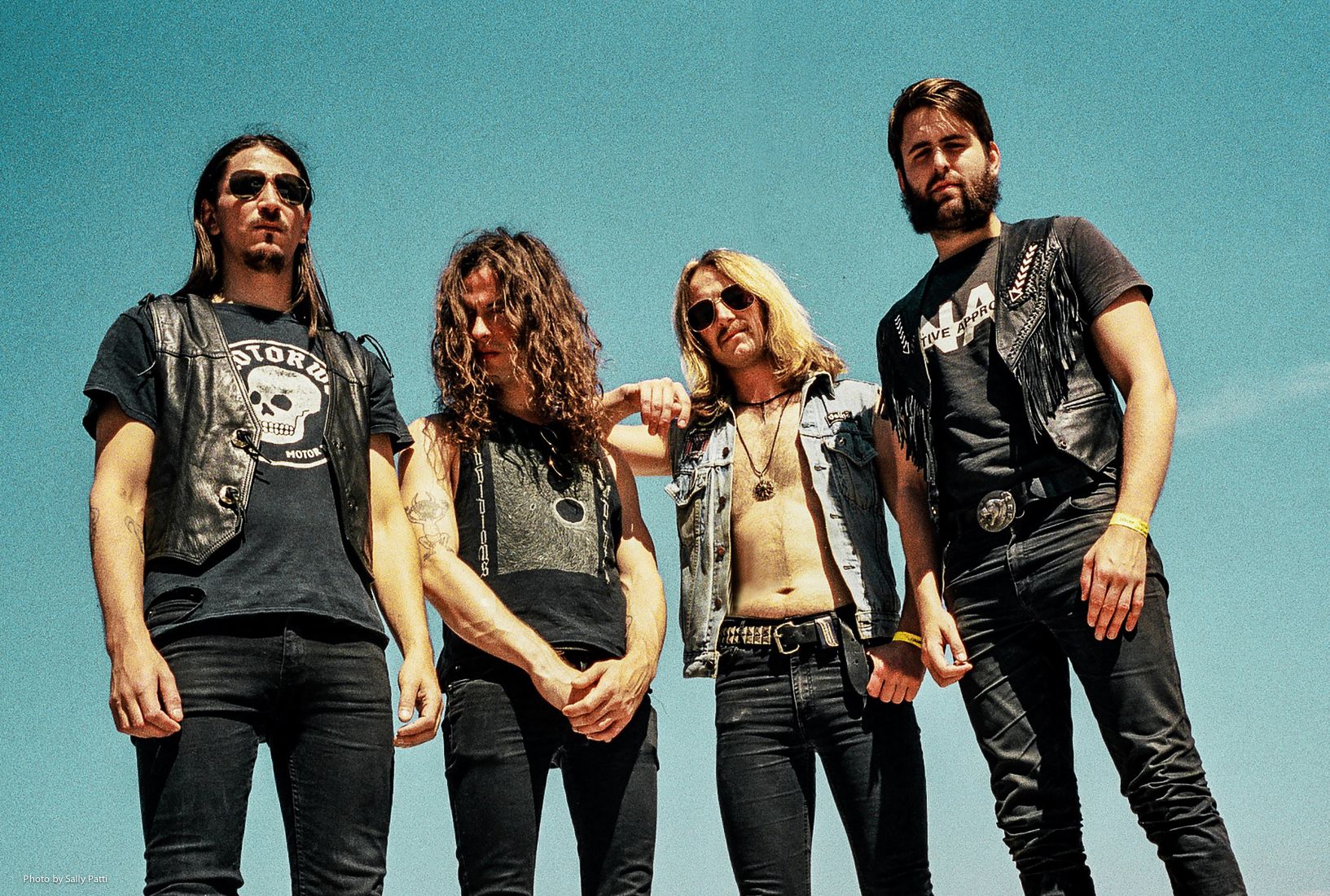 How come Oeds [who also was a member of cult band The Devil’s Blood] and you work so well together?
,,Funny, we ask ourselves the same thing. We have a strong shared ambition with the band and we complement and motivate each other. At a very young age Oeds fully focused on music, he left high school and all the hours I went to school he spent on guitar and later I benefitted from that. He pulled me with him and together we are a good team and best mates. After 15 years of making music together it still feels special.’’

What are the plans for Death Alley?
,,Obviously touring as much as we can! We are now doing a short European tour with Honeymoon Disease, after that it is festival season and we will play several of them. Hopefully after that we will be able to go back to the U.S. again. Again, touring has a big influence on the writing process so we need to go out for that.’’
—
Follow DEATH ALLEY on Facebook and visit their website here