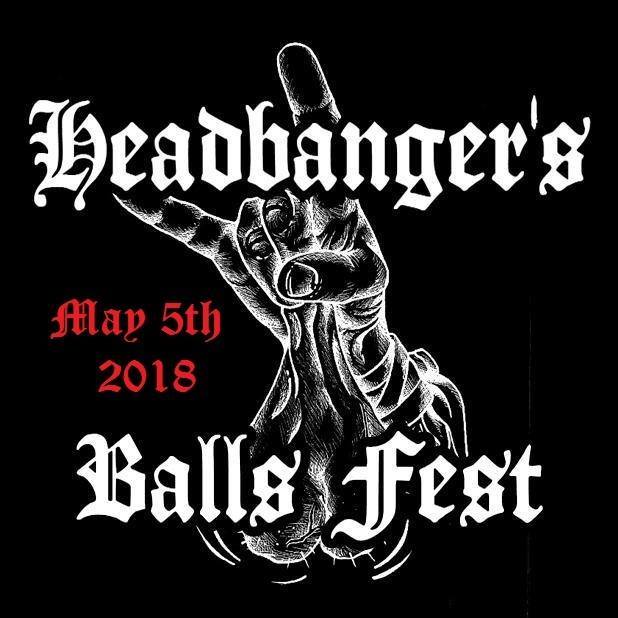 It's The Place To Be

What once started as a spontaneous thought of three friends, who just wanted a party of their own with their favourite heavy music, grew into an official festival. This year Headbanger’s Balls Fest is celebrating its 7th edition, which will take place on 5 May 2018 in Cultuurhuis `The Leest’ in Izegem, Belgium. The first two editions only Belgium heavy metal bands were on the bill, but with the third edition in 2014, the organization brought in for the first time a band from abroad, headliner death/thrash metal band Izegrim from The Netherlands, which took the festival to a new level. Edition four, five and six were again mainly focused on having great Belgium metal bands, such as After All, Dyscordia, Cowboys & Aliens, Spoil Engine and Thurisaz, on stage, but also having USA metal veteran Vicious Rumors, Swedish prog metal gigant Evergrey, the well known German metal masters Freedom Call and Swedish successor Amaranthe in the house, these three editions were a slamming, sold out, success. The organization couldn’t be more happy and proud and started working on the 2018th edition. But then, several months ago they unexpected lost their close friend and main HBF guy Jurgen Callens and time stood still for a while in Izegem. Though the organization (a team of seven this year) decided to continue with Headbanger’s Balls Fest in loving memory of their lost friend. With Flotsam & Jetsam and Avenging Benji on the bill amongst others this will be a special event for sure. HeadBangers LifeStyle got in touch with the organization for more enlightening information about Headbangers’ Balls Fest 2018.

First of all, why should people visit Headbanger’s Balls Fest 2018?
,,The 2018 edition is the first without our beloved friend Jurgen. He will be there in spirit though. He already booked two of his favourite bands [Flotsam & Jetsam and Avenging Benji] and these bands promised to honour Jurgen. So that will be special for sure. We also managed to book a major headliner; this band was never seen live before in our region.’’

What made you eventually decide to continue with HBF?
,,We were convinced that Jurgen would be honoured by us continuing the festival. That decision wasn’t easy though…‘’

How many people are involved to make the 2018 edition happen?
,,Approximately 70 people.’’

What makes HBF different than all the other festivals?
,,There are a lot of festivals in our region, but there is no competition between us. In this small world it’s better that you support each other in this. So we know that everybody is working hard on their own organization and so are we. HBF always wanted to book a nice variation in styles without going too extreme in this. We always keep an eye on the balance of the line-up. Another thing that is important for us is the atmosphere, as well for the audience as for the bands. We received some nice comments of bands concerning the incredible nice service in the backstage: fine food and lots of different beverages served with a smile.’’

So far the announced bands are Flotsam & Jetsam, King Hiss, Avenging Benji, Off The Cross, Guilty As Charged, Fire Down Below and Growing Horns. Is the line-up complete or can we expect more names any time soon?
,,We still have to officially announce the headliner as mentioned before, but we have to wait to do that. We are very excited and proud to have this band on HBF 2018 and we want to the world to know, but we have to be patient.’’ 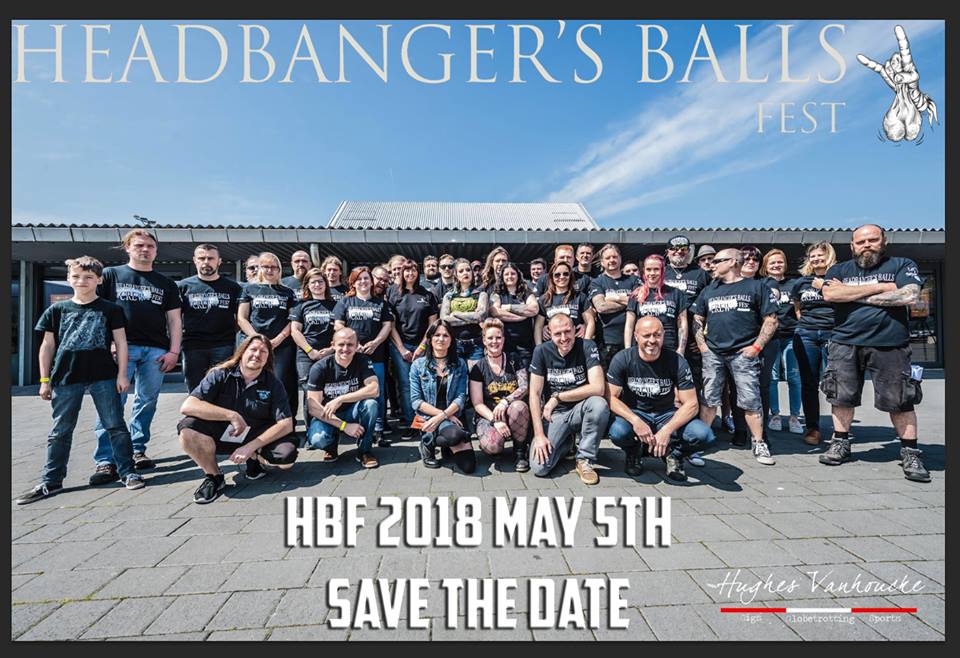 The 2018 edition will be the seventh time you organize this festival. What did you do to improve the festival comparing to its former editions?
,,Last year we moved to a bigger venue and that was a big step forward. We wanted to give everybody some space, the bands as well as the visitors, in a nice environment. This year we look at it as a transitional year, due to a well-known unfortunate event. So, this year the festival will take place as a tribute to our beloved colleague and friend.’’

For people who haven’t visit HBF before, what else is there to do besides watching bands?
,,If everything comes together, like weather conditions and so on, there will be a cosy metal market too. There will also be a lot of different kinds of food stands: from the classic fries over gourmet burgers, a coffee house and delicious pasta dishes. People who like to buy music or some metal clothing will be very happy. Most of the bands will sell their merch and there will be signing sessions. Last, but not least: bearded people will love our lovely barbershop.’’

Are there options for a sleepover when visitors don’t want to drive home or travel from far?
,,We can recommend some local hotels! These ones are price/quality very good: Parkhotel Izegem and who knows you are having breakfast together with the guys of Flotsam & Jetsam [smiling], or Mercureroeselare. You can find both hotels in a 3 km radius of the HBF venue.’’

Ticket prices can go sky high these days. How do you manage the ticket prise for HBF?
,,It’s a shot in the dark: balancing the ticket prices to a sold out edition. Besides that we are not planning to build up a large saving account, since we are a VZW. And nobody of the organisation is paid for all the hard work on the festival. We also have some good sponsoring; people who believe in the concept. We are very grateful for that.’’ 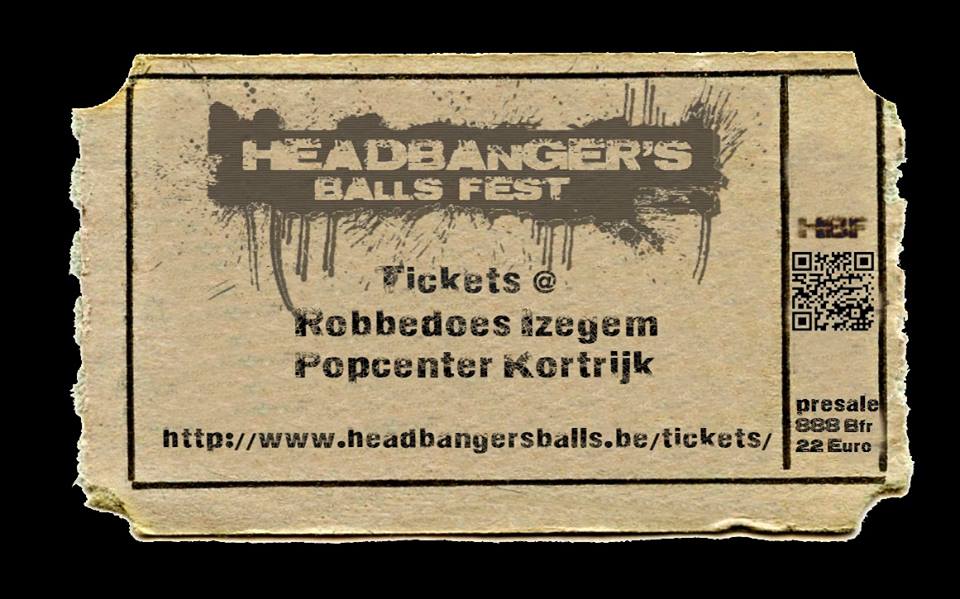 What would put a smile on your face, thinking: Yeah this 2018 edition has been a great success?
,,Maybe it is a cliché, but when everybody is going home happy afterwards, the bands gave some world class gigs and all went well, that will make HBF a great success for us.’’

Festival organizers seem to have the ambition to become bigger every year. How do you feel about the future of HBF? And where would you like to see HBF in 5 years?
,,Our ambition is to sell out `De Leest’ every year. `De Leest’ is the largest indoor venue in our city with perfect infrastructure and a magnificent sound. In 5 years you’ll see the same kind of quality bands in the same magnificent venue [smiling].’’

If a band wants to play at HBF, what is your advice?
,,Please do send us an email via booking@headbangersballs.be between June and September. We start searching for bands for a next edition very early.’’

What are you most proud of, looking back at the HBF history so far?
,,The booking of Amaranthe last year in a sold out venue `De Leest’. It was the first time we went to this bigger venue and managed to sell out immediately…‘’
—
More info about HBF on Facebook and the website.