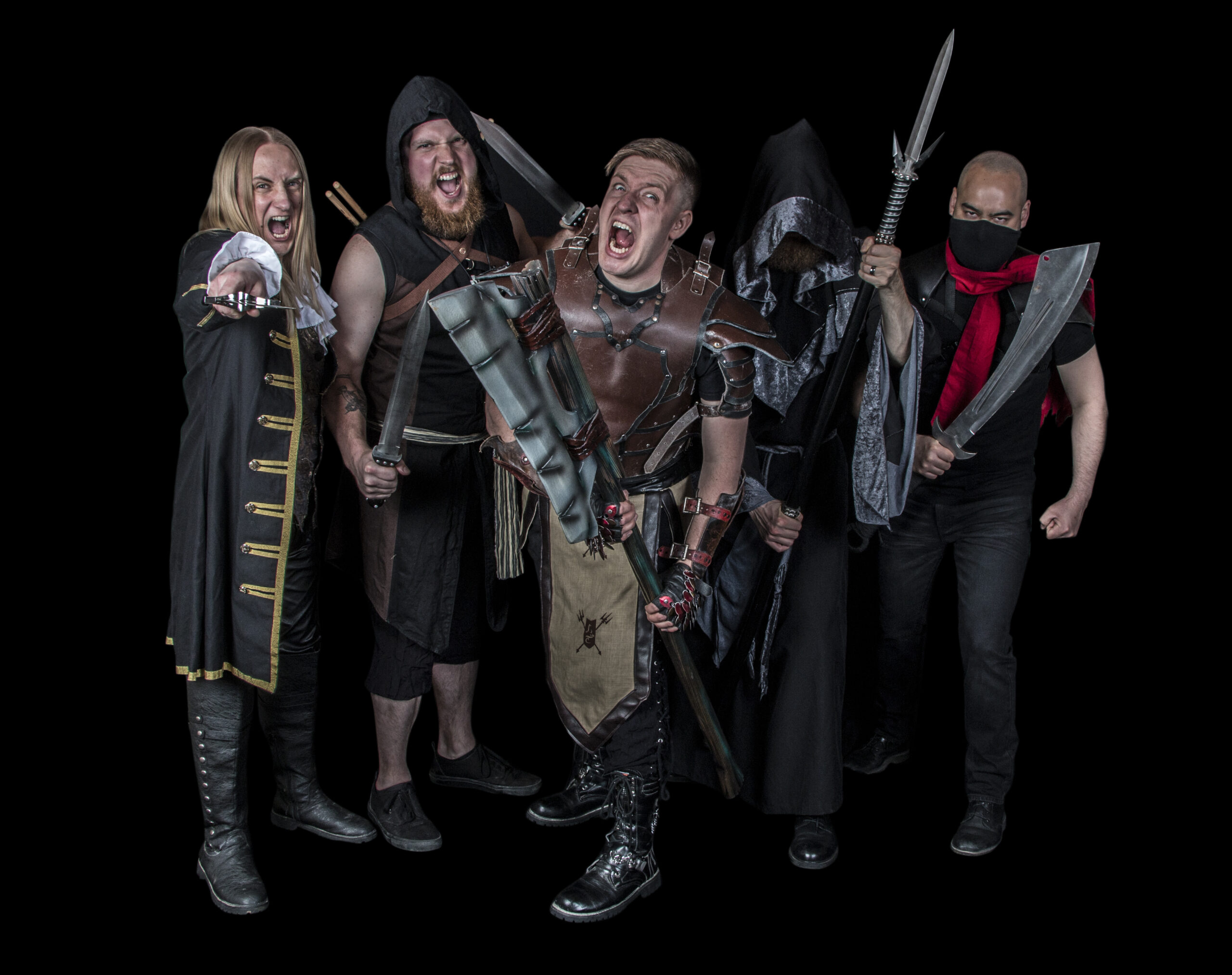 Q&A With LORDS OF THE TRIDENT

Recently HeadBangers LifeStyle teamed up with the nice people of ReverbNation for the third time to give new promising bands or artists a chance to extra promotion and exposure. One of them is LORDS OF THE TRIDENT, which certainly is not your average, everyday band. HeadBangers LifeStyle contacted them and the result was an entertaining interview.

They call themselves the most METAL band on earth: Lords Of The Trident from Madison, Wisconsin [USA]. Founded in 2008 they are now ready for world domination so it is time for an introduction. The whole band got together to answer some questions.

When did Lords Of The Trident start and what was the idea behind it?

Fang: ,,I, Fang VonWrathenstein, have been around since the dawn of time. I emerged out of a volcano containing metal and steel near the formation of the earth, and began my quest to put together a band of the strongest immortal metal warriors you’ve ever heard. Obviously, the backstory of the band’s formation and evolution is quite long, as it stretches over centuries, but those brave enough to read the entire thing can find it on our website, under about -> bio. I’ve heard that most colleges in the US will give English credit if one reads all the way through the Homer-esque story that is our Bio. Currently in the band we’ve got myself, Fang VonWrathenstein, on lead vocals, Asian Metal on lead guitar, Baron Taurean Helleshaar on lead guitar, Pontifex Mortis on lead bass, and Master Hercule “Herc” Schlagzeuger on lead drums. We took a short 750-year hiatus after our 1342 tour (dubbed by reviewers as the “black plague” tour, due to the missteps of our PR agent at the time), and resurfaced in 2008.’’ 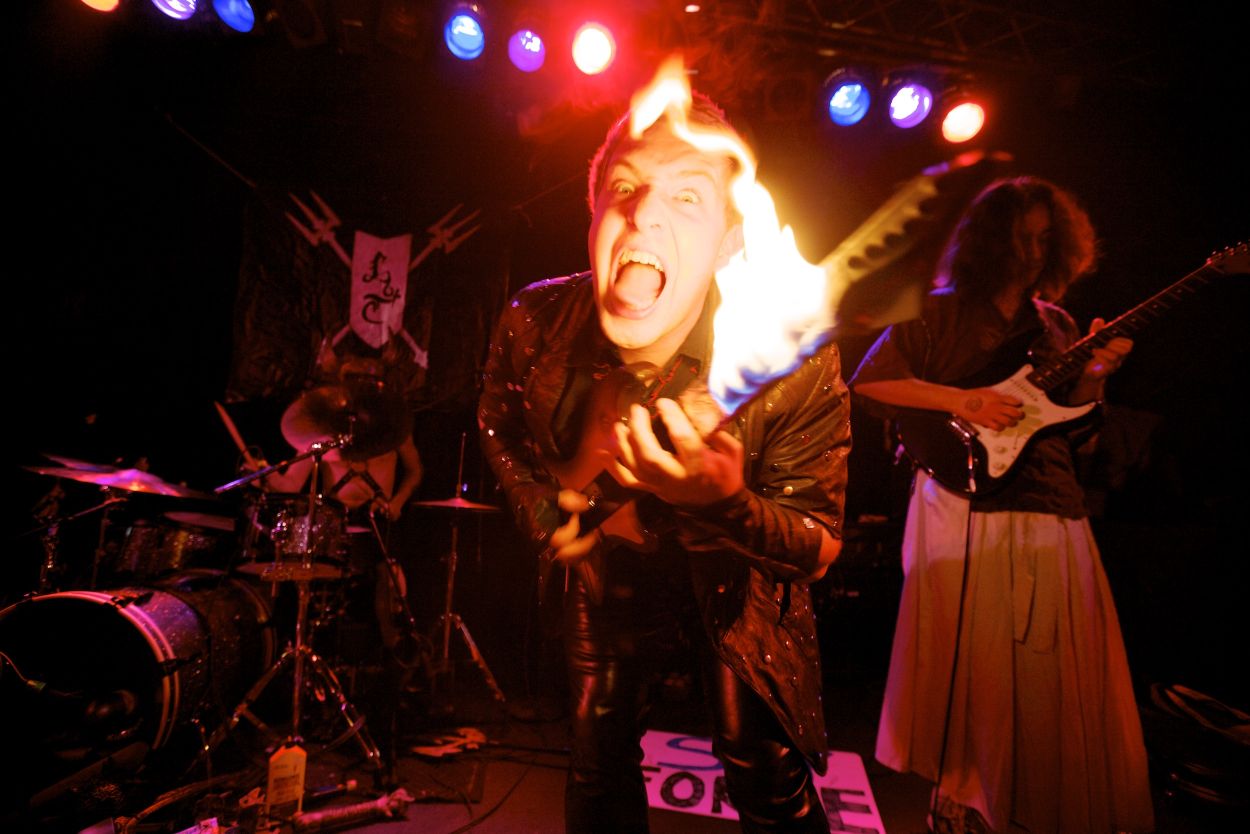 Who did come up with the concept, the whole story, the stage names and backgrounds of the characters?
Fang: ,,Not sure what you mean by that! Although our lives are so amazing as to seem fictitious, I assure you that there’s nothing false about our metal!’’

Starting a band and having a (visual) idea is one thing but to actually realize such an extended concept is something else. How did that road went for the band and how did the band evolve you think since the formation?
Fang: ,,I think having a good stage show is something that every band should aspire to have, and it’s certainly helped us stand out from the crowd. In terms of evolution, I think the band always strives to continuously improve our songwriting, and to that end a lot of our music has become more complex over the years. Also, we’ve learned a lot more about recording and mixing our own music, as well as other DIY-focused aspects of running the band. There’s still a lot to learn, and a number of continents to conquer, so we’re looking forward to the challenge!’’

How have you transformed your ideas in music and lyrics?
Pontifex: ,,Yep’’
Fang: ,,The lyrics follow the music. The riffs present the lyrical content.’’

Baron: ,,The music and lyrics are a tangible form of an originally intangible idea. There is some mystery and alchemy in that transformation, but also hard work and lots of reworking and refining of musical materials.’’ 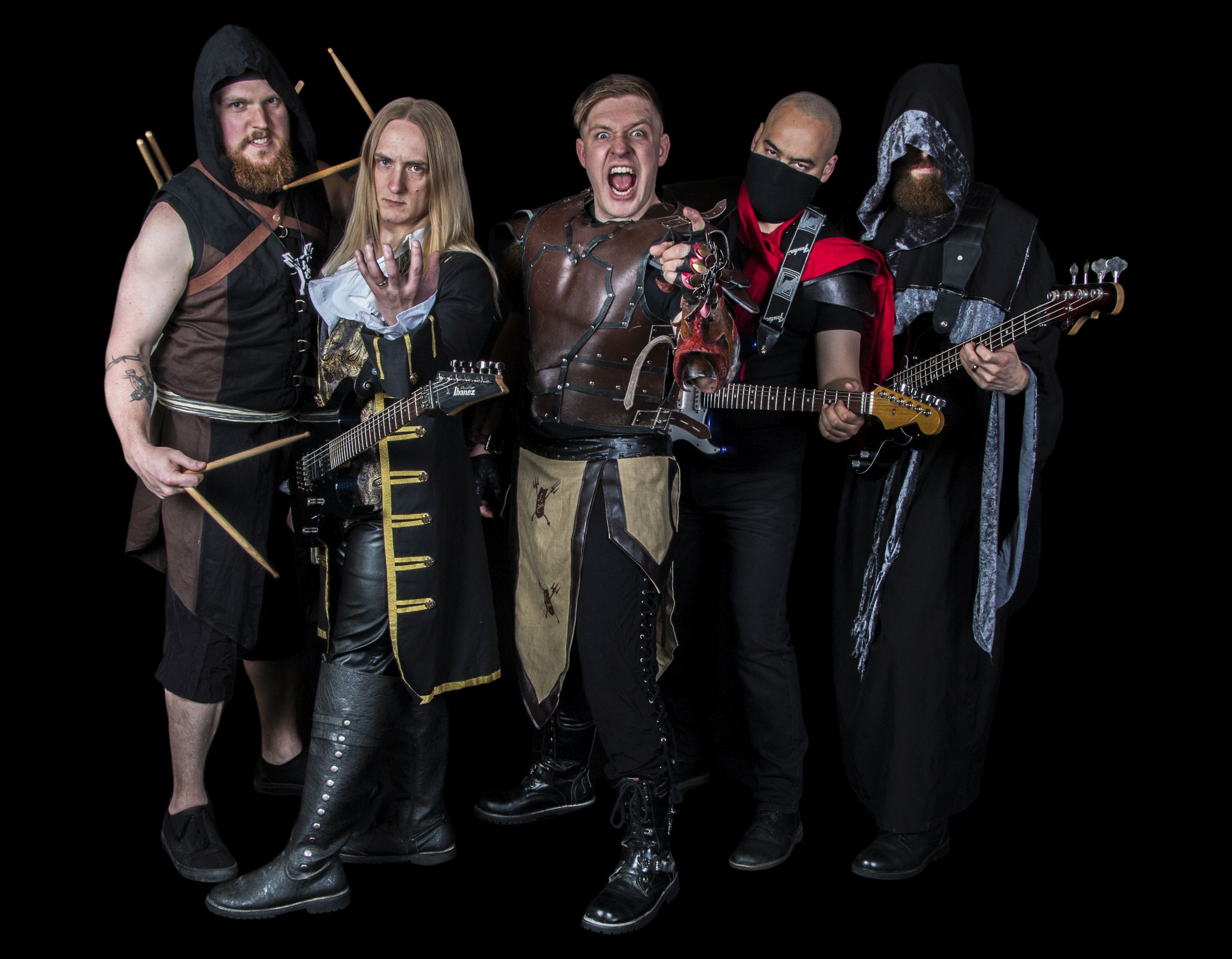 So far Lords Of The Trident released 5 full albums, of which the latest ‘Pull The Plug’ an acoustic best of, and 2 EP’s. You’ve been very productive so far. Who decides when it’s time to make another album?
Fang: ,,3 Eps BTW’’
Pontifex: ,,The universe, the spirits….both ethereal and liquid…’’
Fang: ,,Some days you wake up and say “you know what, this world is lacking in metal…I think we should do something about that.’’
Baron: ,,I write almost all the time, so I try to have songs and riffs ready at any point.’’

Who is taking care of the visuals, the artwork, making clothing etc?
Fang: ,,Pretty much everything you see us doing is DIY – we take care of almost everything for the band ourselves! (Although I will say our barbarian wives will occasionally help repair our armor!)’’
Baron: ,,We have had the Greek artist Andreas Zafeiratos do the artwork for ‘Plan Of Attack’, ‘Frostburn’, and ‘Shadows From The Past’, all of which have turned out phenomenally.’’

Bands like the early Kiss, Slipknot, Gwar, Lordi for instance, did only go in public or on photos when they were in full character. How is that for Lords Of The Trident?
Fang: ,,What costumes? A lot of people assume we have stage clothes, the truth is we wear this armor to thwart the multiple assassins in the crowd. If you can find a Kevlar black metal band tee, let me know!’’

,,If Manowar had a nutsack, it would be Lords of the Trident.” -Fang

Can you describe your music in 3 sentences maximum? 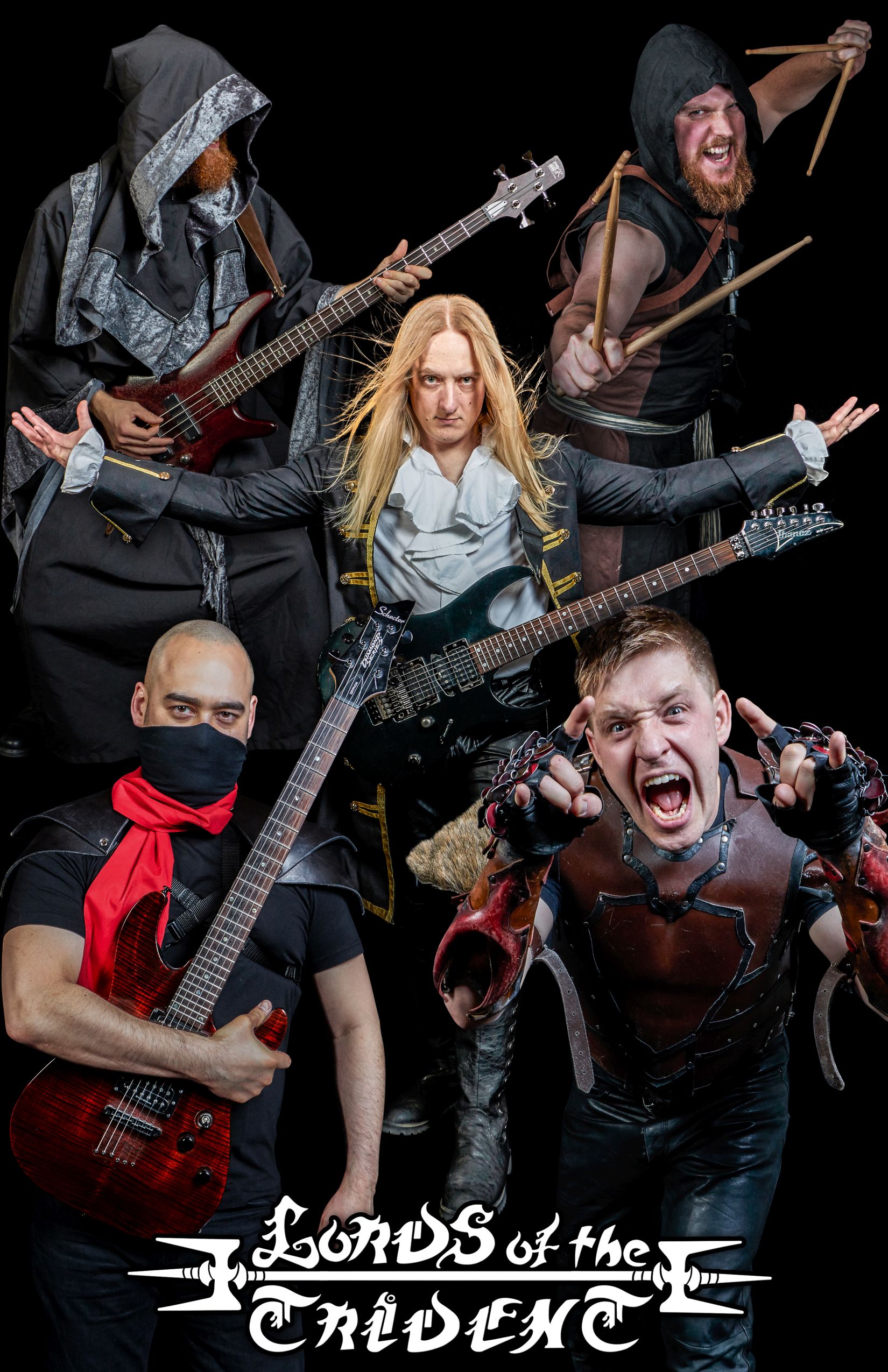 What makes the music of Lords Of The Trident really different from other bands in the genre?
Fang: ,,We blend the best aspects of modern and classic metal together in a guitar-focused onslaught.’’
Pontifex: ,,The guitar solos are more melodic and well constructed than many others in the genre. There is power metal but many other parts in there as well.’’
Baron: ,,I’m always trying to explore new textures and sounds compositionally. The basic sounds that a rock band (2 guitars, bass, drums) can make are incredibly well worn and clichéd in 2019. Anytime I’m writing I try to ask myself, how can I write something a bit different without completely deviating from the metal sound? There are a lot of intertwining lines and harmonies on ‘SFTP’ that most listeners have missed because they haven’t listened closely enough.’’

How important is humor in the lyrics and the overall presentation?
Fang: ,,Metal in general takes itself too seriously. If you’re self aware, you can laugh it in an appreciative way. We like to celebrate that aspect of metal.’’
Baron: ,,Being in a band that is serious about performing well and being entertaining, but not being completely self-important, has honestly been a breath of fresh air for me.’’

What do you want to achieve with Lords Of The Trident?
Fang: ,,Total world domination, nothing less. Beatles who?’’

Baron: ,,There are many perks that come with world domination…like free parking.’’ 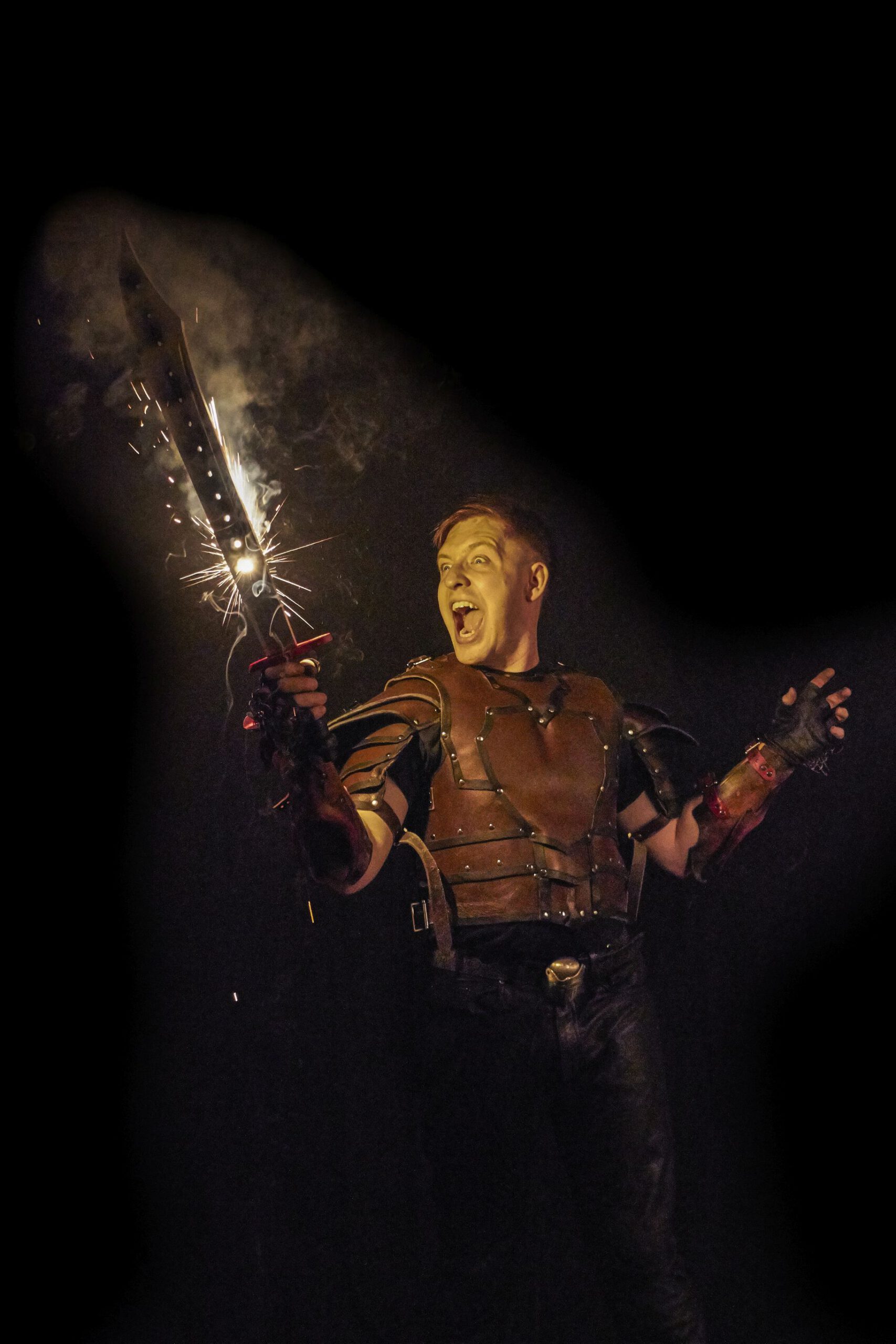 What made you decide to (also) release your songs through platforms like ReverbNation?
Fang: ,,In today’s music environment, bands need to be EVERYWHERE. If fans are trying to listen to your music, and you make it difficult for them, they’ll just listen to someone else! So releasing our music via bandcamp, reverbnation, pandora, spotify – you name it – is a no-brainer!’’

How important are social media and the Internet for spreading the name of Lords Of The Trident and how do you use it?
Fang: ,,Incredibly important! Everyone is on social media nowadays, and if you ignore it, you’re ignoring the best way to interact directly with your fans. We try to post as much content as possible (as well as posting exclusive content on our Patreon page) to keep fans excited and engaged.’’

How would you define success and how far would you go for it?
Fang: ,,Where are you going with this one?’’
Baron: ,,As far as we can I suppose, but while doing it intelligently. The old model of ditching everything and going on the road for months at a time is unsustainable and obsolete. Signing a traditional record deal to facilitate this process is obsolete and detrimental.’’

What drives you as a band?
Fang: ,,Crushing our enemies, seeing them driven before us, and hearing the lamentations of their women.’’

Baron: ,,Making the music that I want to hear, it is even better when it connects with and moves an audience.’’ 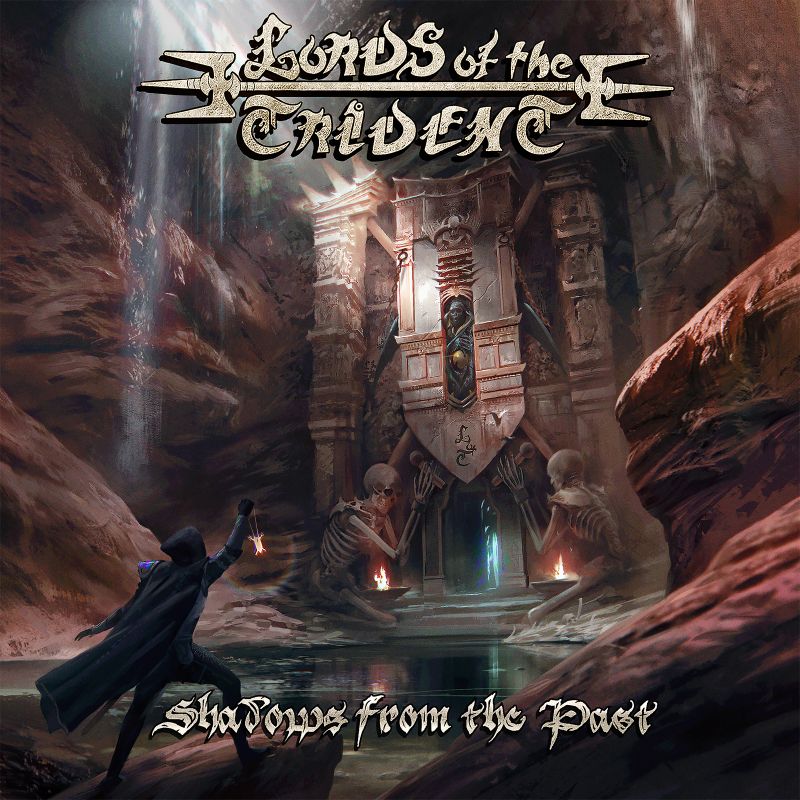 What do you consider as your biggest achievement so far?
Fang: ,,The amount of die hard fans that we’ve been able to connect with through Patreon, and their support both online and in person.’’
Baron: ,,Fang has done an incredible job growing the Mad With Power Festival into an awesome and coveted event. Touring Europe later this year will be pretty sweet too.’’

How do you get your live shows?
Herc: ,,Magic’’
Fang: ,,Threats to shady booking agents. They eventually relent and realize what’s going on.’’
Baron: ,,Consistency and redundancy. Redundancy and consistency.’’

What can people expect when they come to see a Lords Of The Trident live show?
Fang: ,,They can expect fire, explosions, swords, armor, and to schedule some reconstructive surgery for their melted face after the show. Those who survive our live shows are some of the strongest warriors out there!’’
Baron: ,,Chops, energy, entertainment and humor, usually some talk about hot dish as well.’’

What is in the agenda for the band the upcoming months?
Fang: ,,We’re headed to Europe for our first European tour in like….700 or so years? It’s going to be really exciting to be over there, and see how things have changed. We’re also writing the next record, and currently we’ve got about 4-5 songs demoed out.’’ 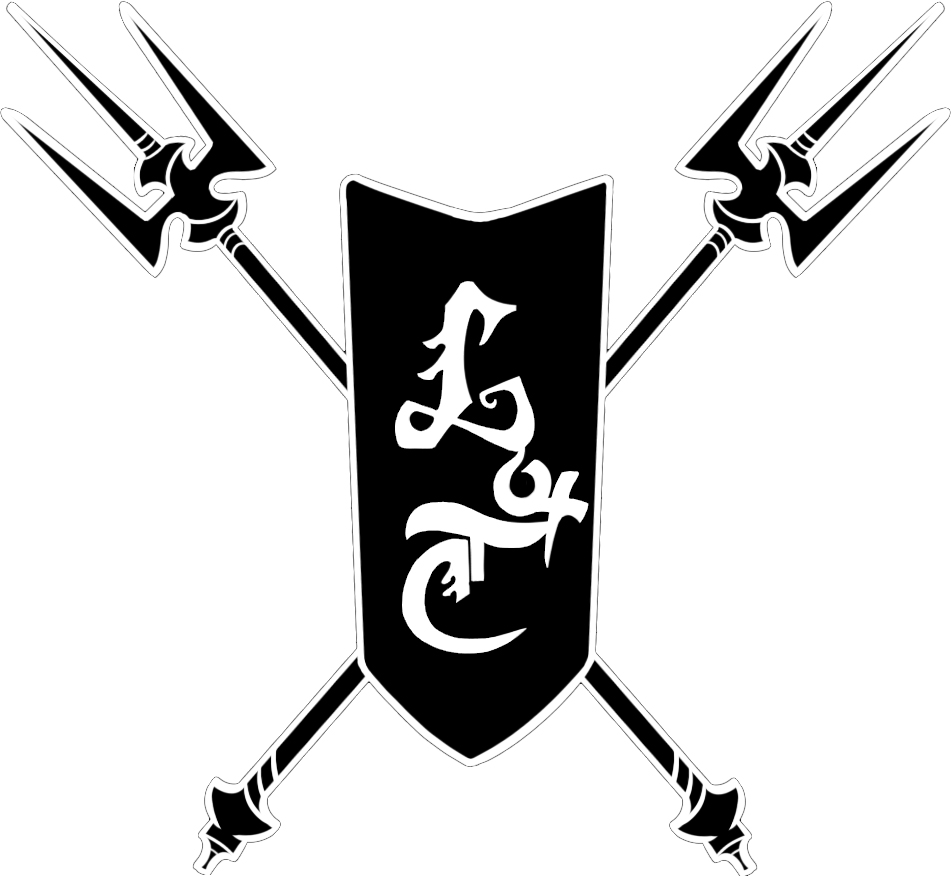 What advice would you give to kids who want to become a musician as well?
Fang: ,,It’s a hard road, but it’s very rewarding. I would caution most new bands that they’re going to be doing 99% of the work for most of their careers. The idea of a label scooping you up and instantly making you successful is a fairy tale, especially in today’s environment. If you don’t get as much excitement from balancing a spreadsheet as you do from performing on stage, you may want to find someone to help you manage your band. Ok, that may be a bit of an overstatement, but you definitely have to think of your band as a small business.’’
Baron: ,,Write better songs, write better hooks, write songs that feature your unique voice…develop that voice and determine what it is you have to say. Develop your craft on your instrument.’’

Is there anything important I forgot to ask and you wish to share with the readers of HeadBangers LifeStyle?

Fang: ,,We’ve got a very active Patreon that I’d encourage your readers to check out! Patreon.com/LordsOfTheTrident – we release tons of exclusive video series, demos, merch, music, and more – and every penny goes directly to help support the band (and our dreams of world domination)!’’
—
All photos provided by Lords Of The Trident