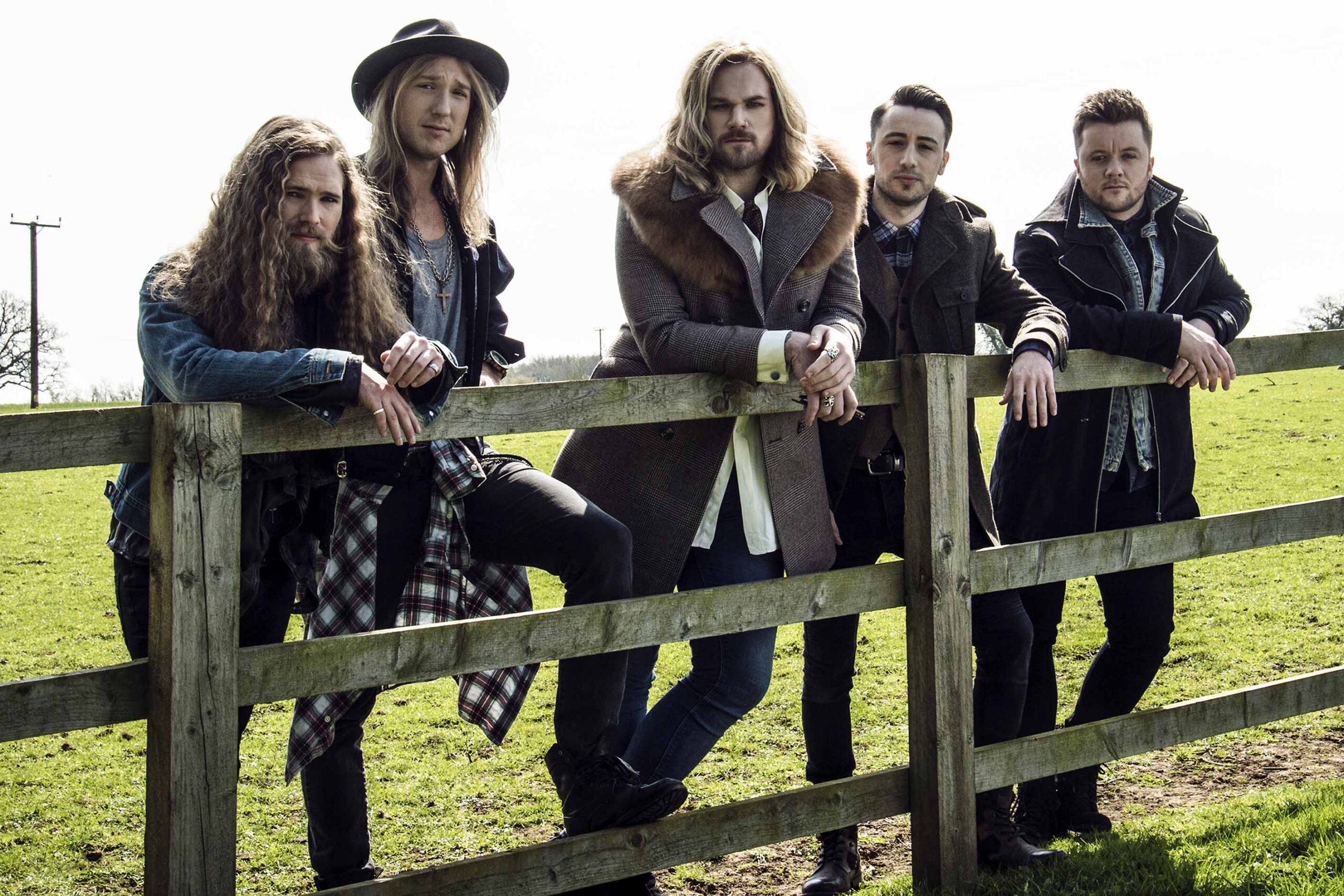 Stepping up to the plate

February 3, 2016 by Michel van de Moosdijk - More about our team

With a stunning first CD the English/Swedish formation Inglorious (yes, named after the Quentin Tarantino movie ‘Inglourious Basterds’ with Brad Pitt) might put British rock back on the map again. Although there has always been a healthy British scene the last years everything decent came from the established bands like Deep Purple, Thunder, Def Leppard, Whitesnake, etcetera. There were hardly any new bands that could make a dent. Furthermore, with all the above mentioned bands ageing, there could be a danger that the music that came to live in the seventies and eighties might fade away and could become a musical style just for the happy few. Inglorious could be one that might change all that, or at least play a big part in re-establishing the popularity that this type of music once enjoyed. Singer Nathan James is stepping up to the plate together with drummer Phil Beaver, bassist Colin Parkinson, guitarist Wil Taylor and lead guitarist Andreas Eriksson. Your favourite web magazine caught up with the vocalist who first gathered attention during a music contest some three years ago. 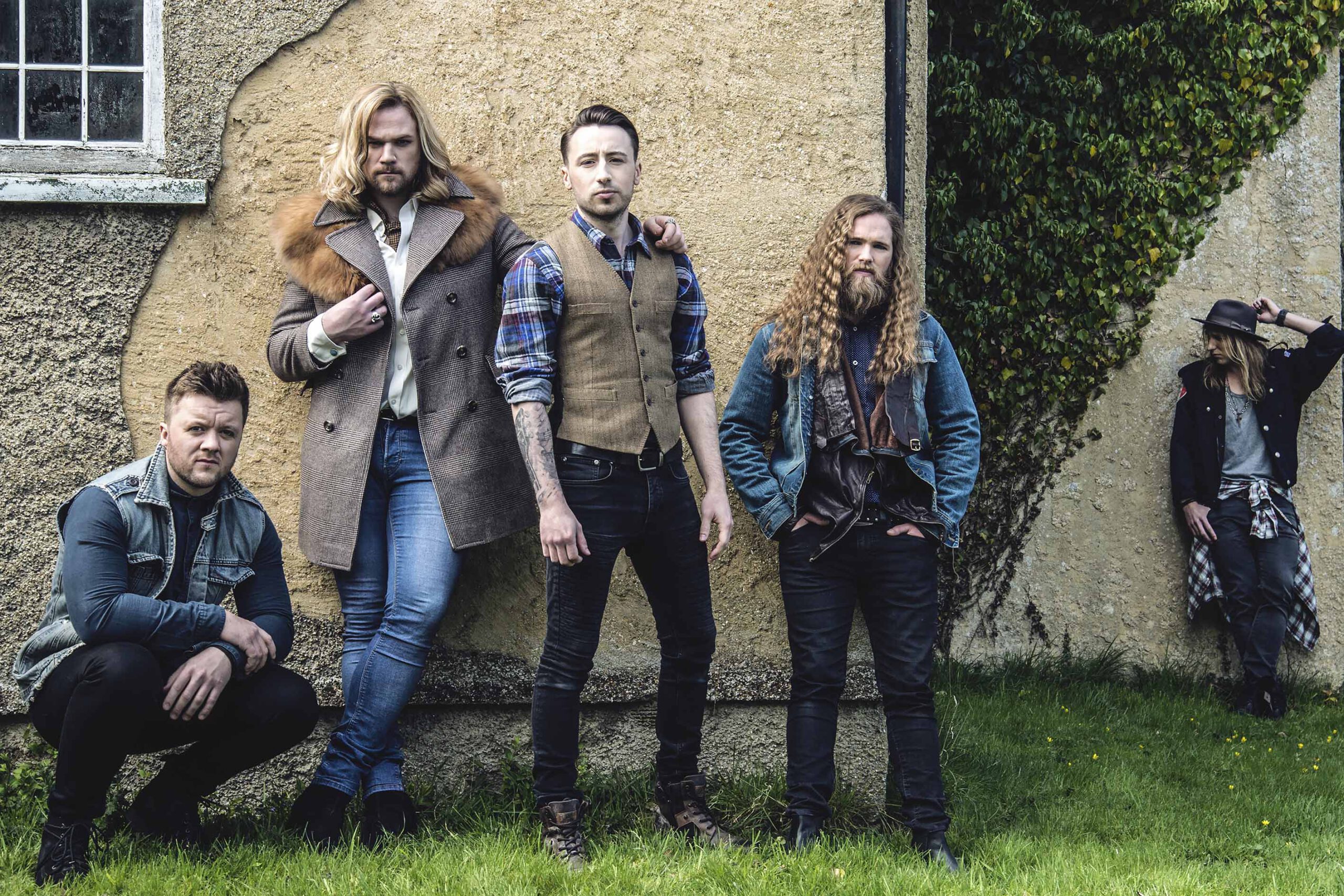 You participated in a contest called ‘Superstar’ on English TV some time ago. Why did you participate in such an event that may be compared to something like American Idol?
,,I realised that in order to get noticed, to make a name for yourself, you have to get yourself on TV. ‘Superstar’ was a contest with the winner ending up performing the main part in the Jesus Christ Superstar musical that was going to be directed by Andrew Lloyd Webber. Ian Gillan did it in the seventies. It was my goal to make it to the musical, not so much wanting to sing the part of Jesus, I was more interested in doing/singing the part of Judas, a more challenging part in my opinion.”

On You Tube you can find some songs that you did during the contest. You even released a CD with covers that you recorded, among them ,,How Am I Supposed To Live Without You” from Michael Bolton, and you also can be heard doing the Bill Withers classic ,,Ain’t No Sunshine”. Some of the judges of the contest were actress Dawn French (The Vicar Of Dibley) and Jason Donovan, an Australian singer that became more known as being an ex of Kylie Minogue than for his own singing….
,,Ha ha, what can I say? I did not make it to the final, but all in all it was a challenge. As a singer you become more versatile when you compete in a show like that. You never know what they want you to sing, it could be something that you have no feeling with. Still, you have to do it and it helps your development as a singer, no doubt about it. And yes, I am a fan of Michael Bolton. Yes, the old Michael Bolton, ha ha.” 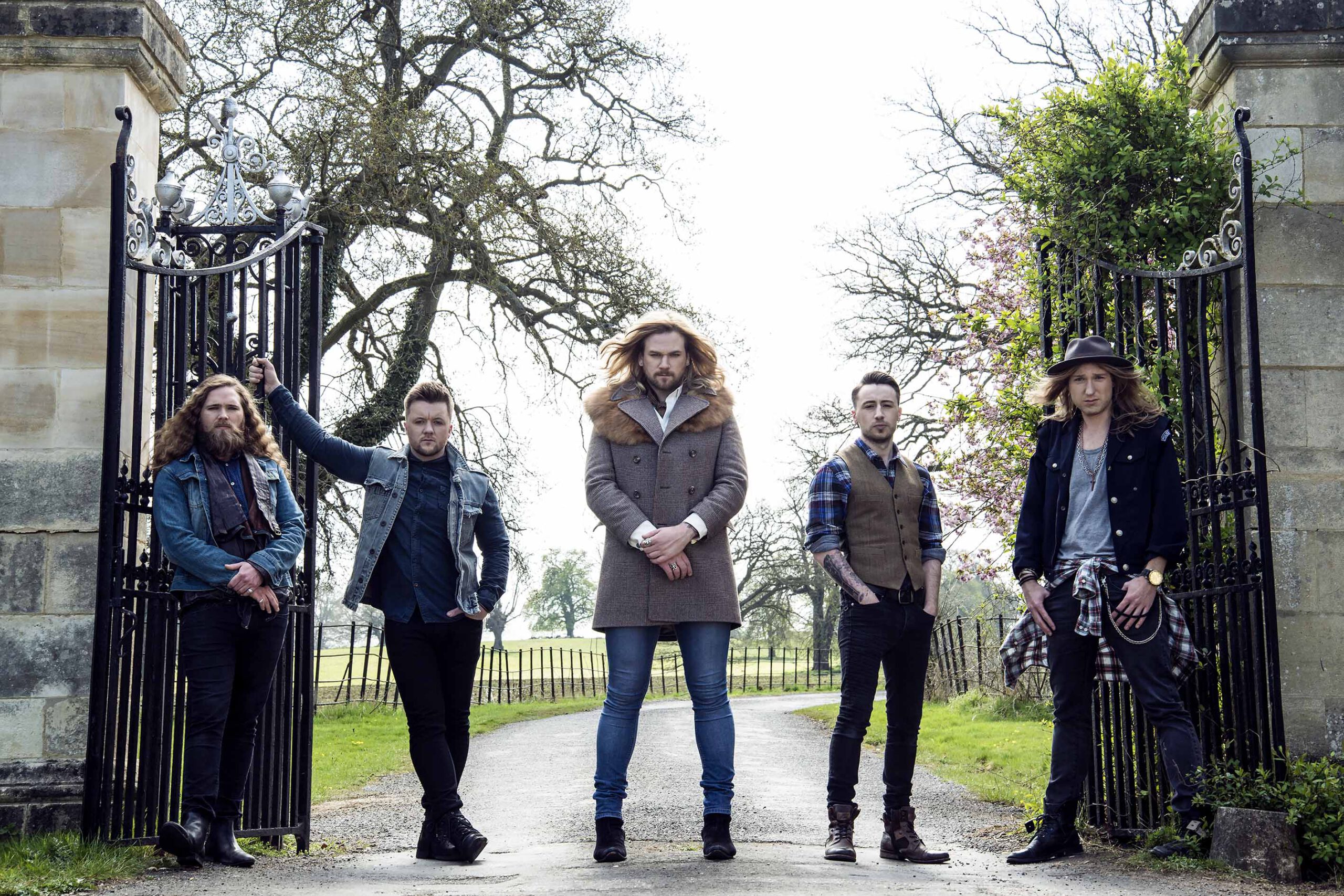 So what did ‘Superstar’ bring you?
,,A lot, I must say. The You Tube performances landed me a gig with Trans-Siberian Orchestra for instance. Director Paul O’Neill saw some of that and I got an invitation to join the project, record and sing live. It was good money as well, I must admit. I have been working for about two years with the other musicians. When you play with guys like Steve Vai, Al Pitrelli and Joel Hoekstra you learn a lot. Al and Joel have also written some of the songs with us for Inglorious. It was a good experience. Working with Paul O’Neill is great. There is a certain way he wants you to perform and sing, he has got everything in his head and that means that as a musician you do not get to pick the songs, there is not a lot of freedom. You have to accept that, although is it not always easy. And you might know perhaps that I also sang on the CD ‘Scorpions Revisited’ by Uli Jon Roth.”

During this involvement with Trans-Siberian Orchestra there was some song writing going on for the Inglorious album as well. How did you cope? The band was in the UK, you were in America….
,,Via internet and Skype we worked on songs and ideas. The boys would send me some ideas that I worked on during the day. It was not the best way to do it, but you have to make the best of the circumstances some time.’’ 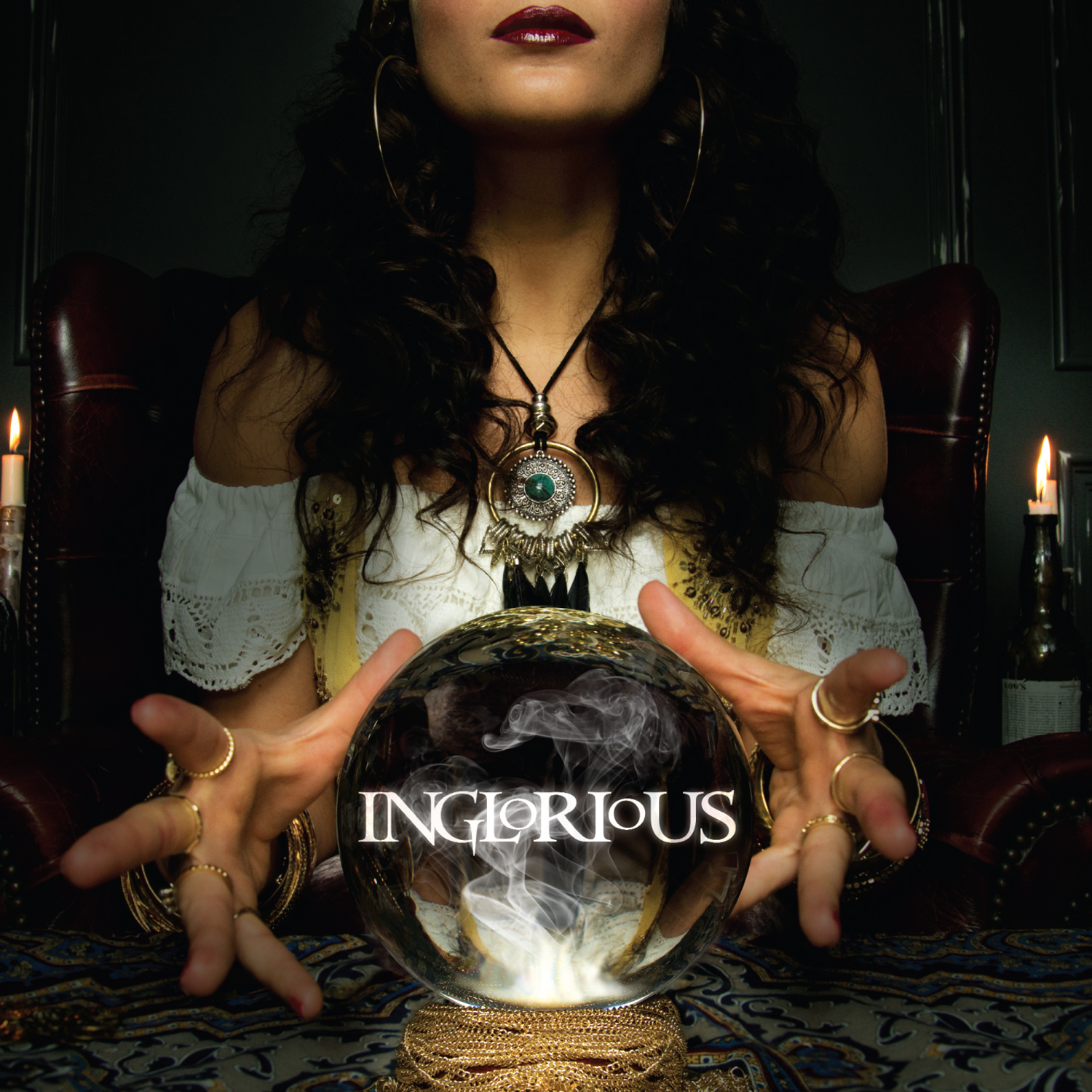 The internet has its use, so has You Tube. The disadvantage can be that long before the official release date of the album your songs can already be found and heard on You Tube…
,,As far as I know we have three songs that are on the album and that have been released onto You Tube. We have tried to limit it to three. I don’t know if there are other songs that are on the album already out there. We just wanted to give the people a taster of the album.’’

A taster that makes you want more, that is for sure. The CD has a bluesy background, big ballsy vocals and above all great songs and performances. It has got all the ingredients that makes the CD to a perfect example of what classic British rock should be about…
,,Thanks, that is good to hear. You know, I love bands like Deep Purple, Led Zeppelin, Free, Whitesnake and singers like Robert Plant, Glenn Hughes, David Coverdale and Paul Rodgers. These are the people that have been my main influence.”

Listening to Inglorious the following words are key to the music in my opinion: energy, feeling, performance, soul and a big live vibe…
,,I agree with you. We have recorded the album almost in a live environment. Everybody together in the studio, as little takes as possible and a minimum of overdubs. I think it worked out well, because we were all focussed. In fact we recorded 22 songs of which 11 made it to the album. We were in a flow. I am not sure what we are going to do with the rest of the material. Some of it will end up on the second album, I guess.”

I find it a bit strange that you had to go to Sweden to find a lead guitarist…
,,Let me tell you something. We could not find a good guitarist in England. We have auditioned at least 30 guys, not one of them was good enough. Very frustrating indeed. Are they hiding in their bedrooms? Are they afraid to come out and play? I really don’t know. At the end of the day I reached out to a friend in Sweden and he suggested Andreas Eriksson. We got in touch and I asked who his favourite guitar player was. He answered Mark Knopfler of Dire Straits. That was very positive. Andreas was playing in a bit of a sleaze band at the time and I did not understand that at all. He said it was the best thing going for him at that time and that he was waiting for something better to come around. He joined us and fitted in very well. We had already written most of the songs which was no problem for him. He came over and played. In the beginning he was travelling between Sweden and England, while we were still recording, so it was a bit hectic. At some stage we just camped out in the studio. I am sure that on the second album Andreas will contribute even more.’’ 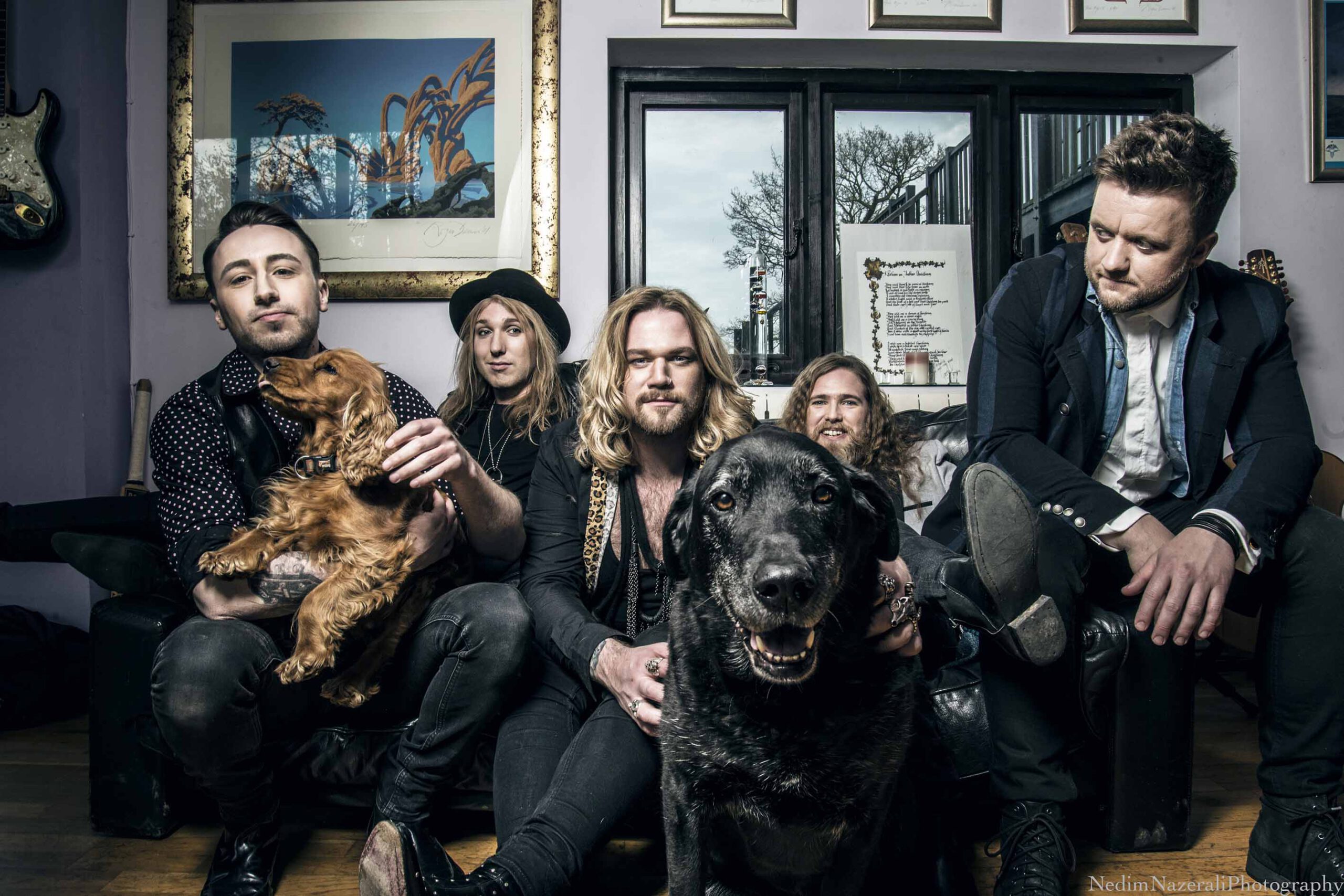 Whenever I read anything about Inglorious I always find that this band is seen as a young version of Deep Purple. Okay, when you listen to the intro of ,,Until I Die” I can understand the comparison. It sounds like Jon Lord has come down from heaven, brought his Hammond B 3 organ and played the intro. But that is it, there is a lot more about this band…
,,Jon Lord coming down from heaven to play with us… Wouldn’t that be something? I can understand the Deep Purple link and I certainly do not mind it. But as you say, there is more to us. By the way, we have a great guy who plays the Hammond organ. He is coming with us the next months to play live, to boost our sound even a bit more.”

Very nice Mr. James, you are teasing me. Here I sit in Western Australia and I must miss your tour with nobody less than The Winery Dogs.
,,I feel sorry for you, ha ha. Yep, we are opening up for The Winery Dogs on their European tour. I am looking forward to see Richie Kotzen perform. Great singer and guitarist. Should be good fun.’’
—