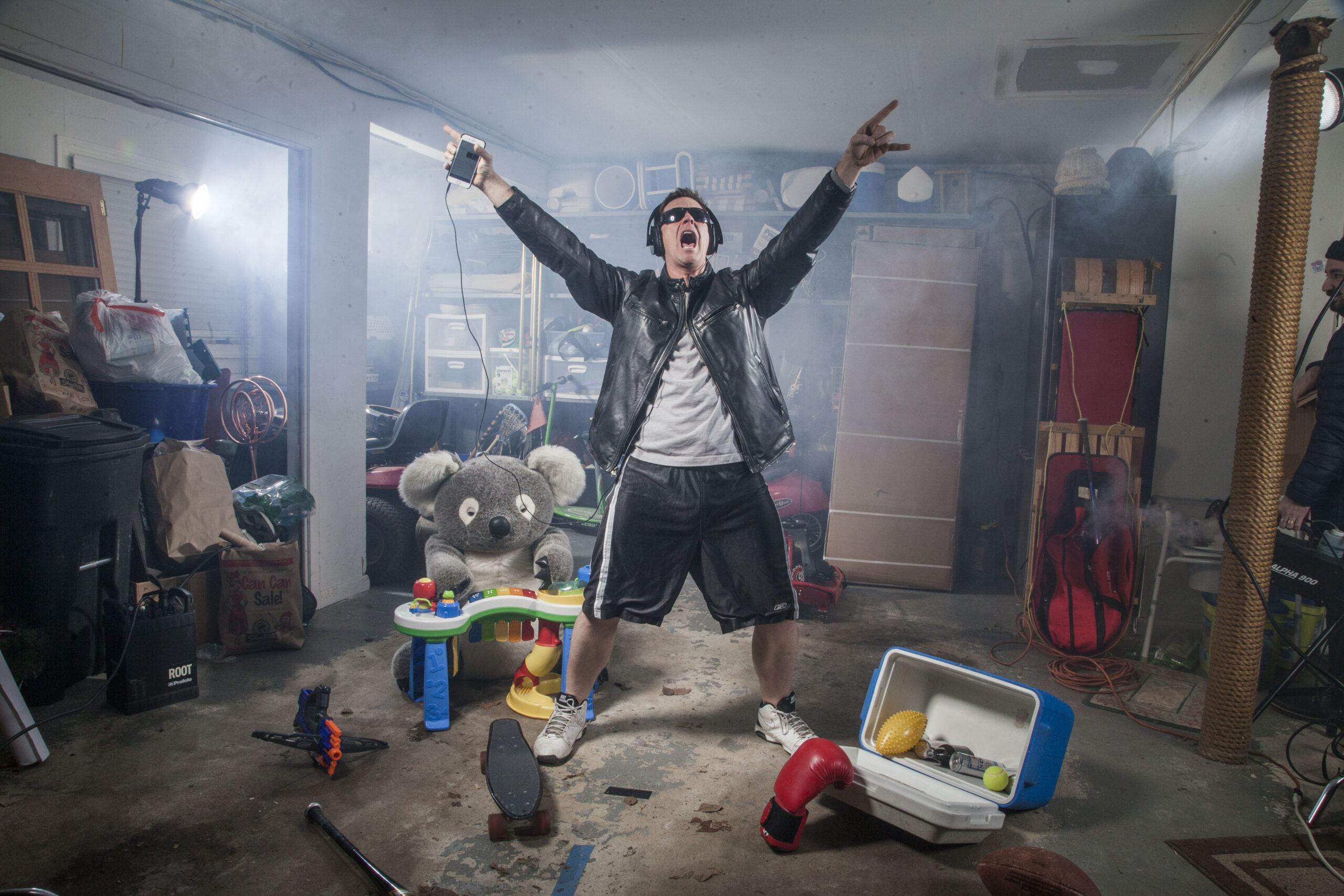 Heavy metal with a smile

Having a career as a stand-up comedian for over 20 years Jim Breuer had a quick rise becoming one of the most recognizable comedians in the business. Hailing from Long Island, New York Jim climbed the ladder of fame by starting in a bar and joining the cast of Saturday Night Live a few years later. He became a successful touring stand-up comedian and a well-known face on Comedy Central, but also made it to Hollywood appearing in the popular films `Zookeeper’, `Dick’, `Titan A.E.’ and `Beer League’. Everyone who has seen Jim performing live in the theatre or on You Tube doing hilarious impersonations of well-known rock artists, such as James Hetfield (Metallica and Brian Johnson (AC/DC), recognizes his huge passion for heavy metal. Being a fan of heavy metal since his teens Jim Breuer finally made it to record his first album, `Songs From The Garage’, meant for everyone who grew up with eighties metal. Having Brian Johnson featuring on his debut Jim is definitely living his rock ‘n roll dream right now and he is very much willing to share his excitement with HeadBangers LifeStyle. 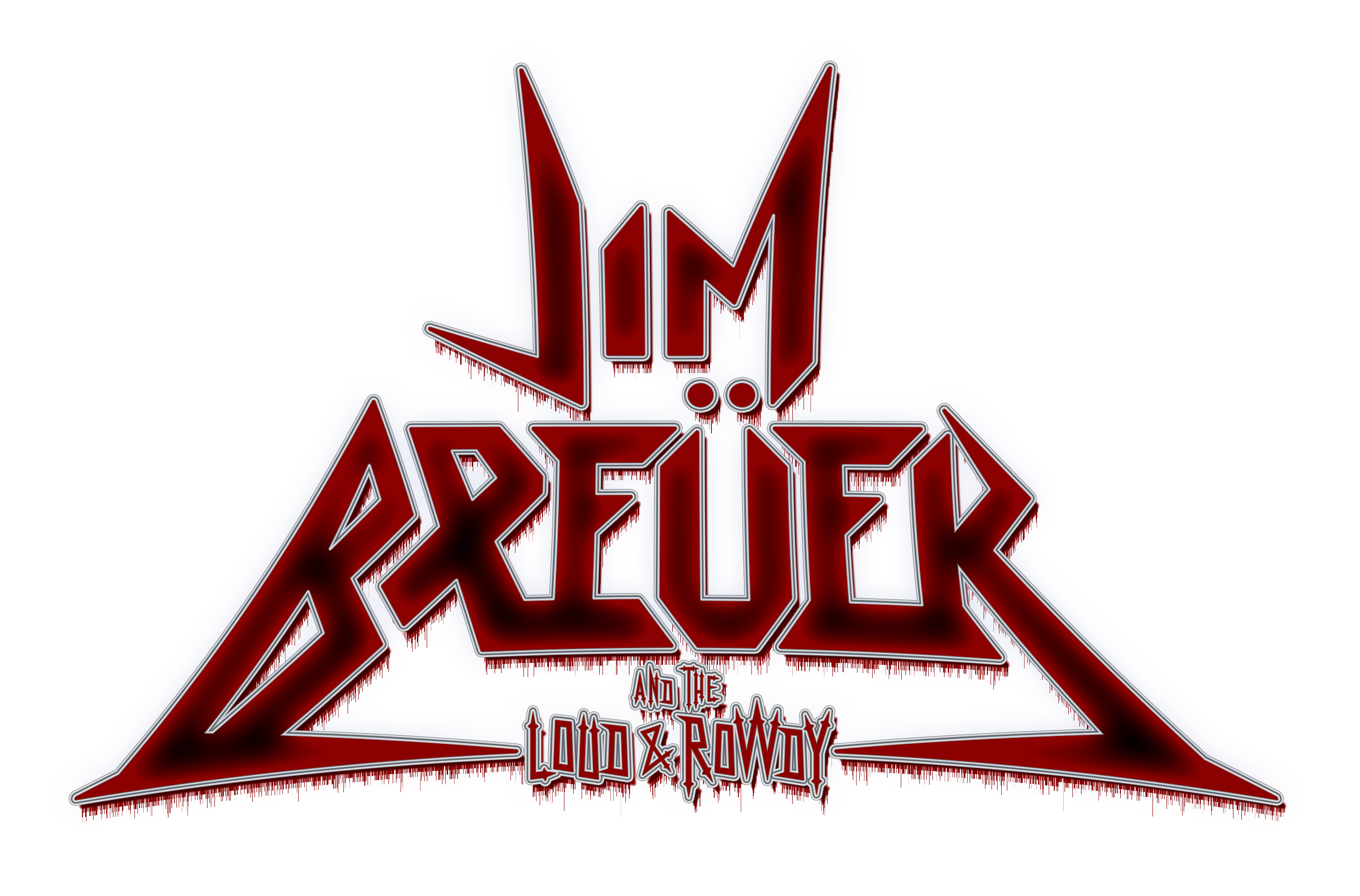 What’s going on in your life right now?
,,I’m feeling great! My first album is just released. I don’t know what to expect, who is gonna be listening and who really loves it. I know I love it, I am excited about it and super stoked about what I am putting out there.’’

What can people expect of `Songs From The Garage’?
,,If you grew up with the eighties metal, like Judas Priest, Iron Maiden, Dio, Black Sabbath, Ozzy Osbourne, Metallica, Scorpions and Mötley Crüe, then you are going to love this! I basically wrote this album for everyone that grew up with that music who now has a family, kids and a life and you are in your forties, fifties and you still thrive for that music. I don’t have tattoos and I am not into the devil or dark stuff and blood. I just wanted to bring heavy metal back to the mainstream and make it a little fun again; just a little bit of a smile with an attitude and with a lot of hard energy. I haven’t seen that in a long time. I cannot relate to a lot of lyrics that are out there anymore. When I first started listening to Metallica and Judas Priest my parents looked at me like I was nuts. `What is this garbage?’ I have been talking to younger kids and I don’t get the barking and the growling but they think it is amazing. I am confused because that is not appealing to me. It is like a piece of pizza or food I don’t like the taste of it. So all I am really doing is putting out there what I love and I am going for that. And I think there are a lot of people that grew up with me, worldwide, that feel the same exact way. It is not a knock on anything that is out there, it is just: `Hey I haven’t heard this in a while and I miss it’.’’

Why did you call the album `Songs From The Garage’?
,,To me the openings track ,,Thrash’’ sets the tone of what this is all about. It is really just me, a family guy, who at the end of day you can give him therapy, faith or whatever? But what gets my ass up out of the seat when I am 90 years old is going to be my old school riff music. Thrash and the headbanging. So when I am home alone, I am in my garage tearing up a concert by myself with my headphones on. That is why I called the album `Songs From The Garage’ because they are all songs that I have been creating in my head, all alone in the garage over the years.’’ 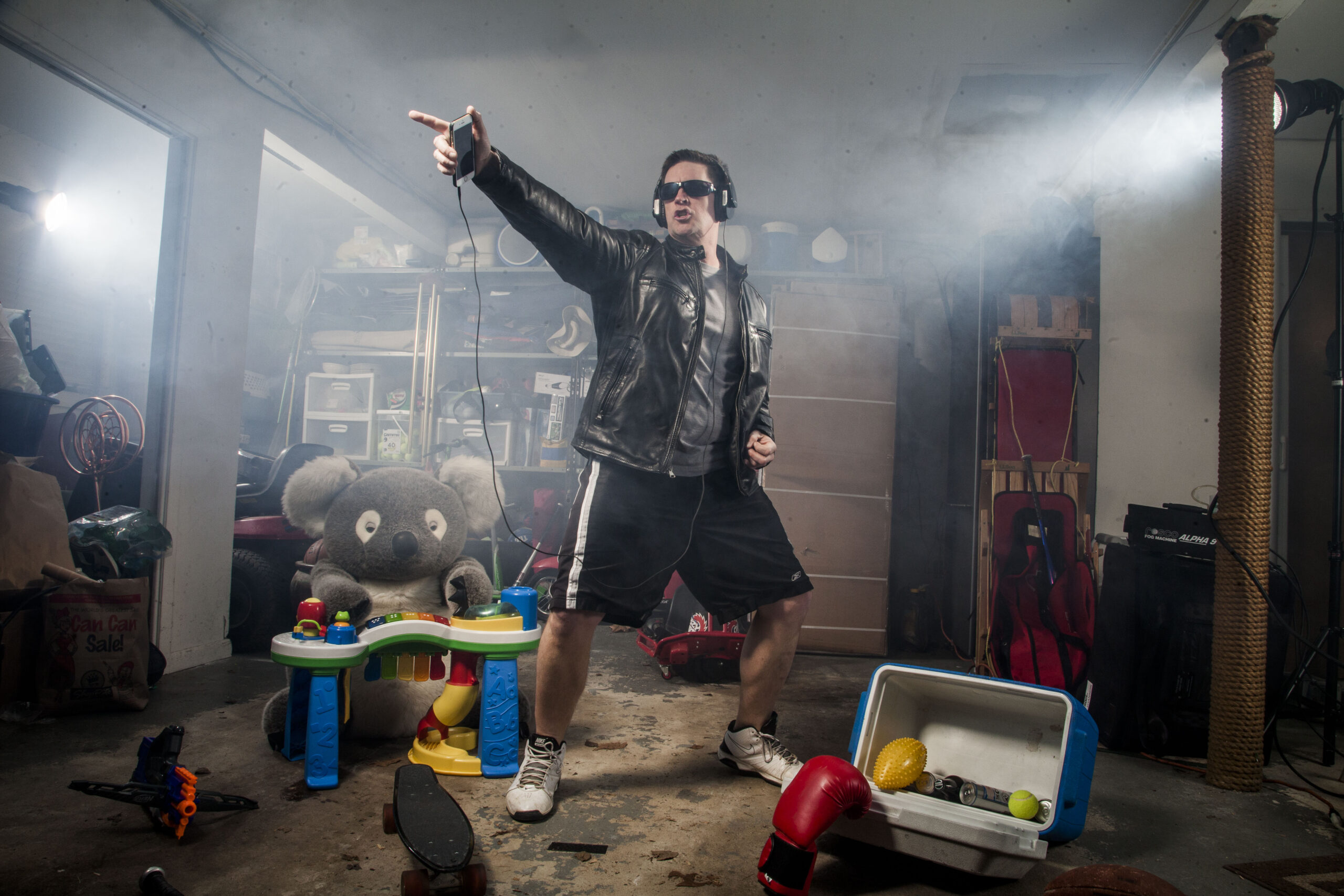 Why didn’t you put a record out ten years ago?
,,Well, a couple of things. First of all I started off in 1985 in high school. I worked in a rock club as a master of ceremony being funny. I also was fronting a heavy metal band, playing songs of Scorpions, Judas Priest and all, but keeping the band together was really hard. The stand-up comedy took off a lot quicker and it was a pretty quick rise. In the mid nineties when I was on Saturday Night Live and filming movies I still had the desire to make music but it was hard to find the time. You need a band and write songs. When I finally had the time I didn’t have a lot of confidence that people would accept it. I knew I had to do it right because coming from being a comedian to any type of musical venue is extremely hard, unless you are trying to be funny and silly. So it took me a long time to conquer that fear and get my confidence.’’

When you finally had the confidence, how did you handle it from there?
,,It was a couple of steps. The first one was I knew I had to find someone in the music industry and I found Cory Brennan who is a manager, having bands like Megadeth and Slipknot. Then I knew I had to find a record label and we got Brian Slagel of Metal Blade. After that I knew I had to get the perfect producer to help me through this and I think I nailed it a thousand per cent with Rob Caggiano [Volbeat, Anthrax]. If it wasn’t for Rob, I mean he helped me tremendously putting this album together, helping me write certain areas, teaching me so many different things about recording and music. He made me working hard and once I was that far in it I had all the confidence in the world.’’

How did Brian Johnson of AC/DC end up on the album, featuring in the songs ,,Mr. Rock n Roll’’ and ,,My Rock n Roll Dream’’?
,,Brian seeked me out years ago for doing my imitation of AC/DC, doing the Hokey Pokey. And then for him to come up to me saying: `I wanne be on your record’. I’ll never forget that moment. I thanked him and he was like: `No I am serious’. Then he called again asking: `Hey are we doing this? What are we doing?’ I told him I got an idea for us and he loved it. To watch him record with just a handheld microphone, no headphones, singing like he was in concert. I just couldn’t believe that’s how he recorded! Sweating, singing like he was on stage, giving his heart and soul just for me. That shows the person that he is. He is a great man. I am so honoured that he did this for me. Next to my father, he is the most giving, funny and one of the greatest guys that I have ever been around. He just gives you everything. I don’t even know how to explain him. The fact Brian is not able to tour anymore with AC/DC really sucks. I have nothing against Axl Rose, but I just can’t absorb and swallow it yet, what’s going on with AC/DC right now. If it wasn’t for Brian Johnson I would have never discovered AC/DC and I wouldn’t have discovered the great Bon Scott either. Brian has put AC/DC in a stratosphere and made them from a great band to the all time greatest.’’

You do a great imitation of Brian Johnson in your comedy shows. Have you ever dreamt of being the new frontman of AC/DC?
,,No! That is silly… That is crazy!!!! Honestly I don’t think I can pull it off more than two minutes. My voice would be shredded to pieces.’’

When was it you became a real metal head?
,,I was a teenage boy and Judas Priest became my gateway to heavy metal drug. Judas Priest was killing it on the radio in America with ,,You’ve Got Another Thing Coming’’ and ,,Living After Midnight’’. I went from there to Scorpions, to Accept, Metallica, Iron Maiden, Ozzy Osbourne and it just never ended. The energy, the shock jock, the attitude, things they were singing about, I can really relate to a lot of the lyrics. It gave me identity. I listened to metal radio shows, watched MTV Heavy Metal Mania and it just so happened that the European and British metal was way more appealing to me than anything else until Metallica showed up and earlier Van Halen and the first two Mötley Crüe albums. Growing up in Long Island New York, Twisted Sister the hometown boys representing metal with songs like ,,Stay Hungry, yeah they were our heroes.’’ 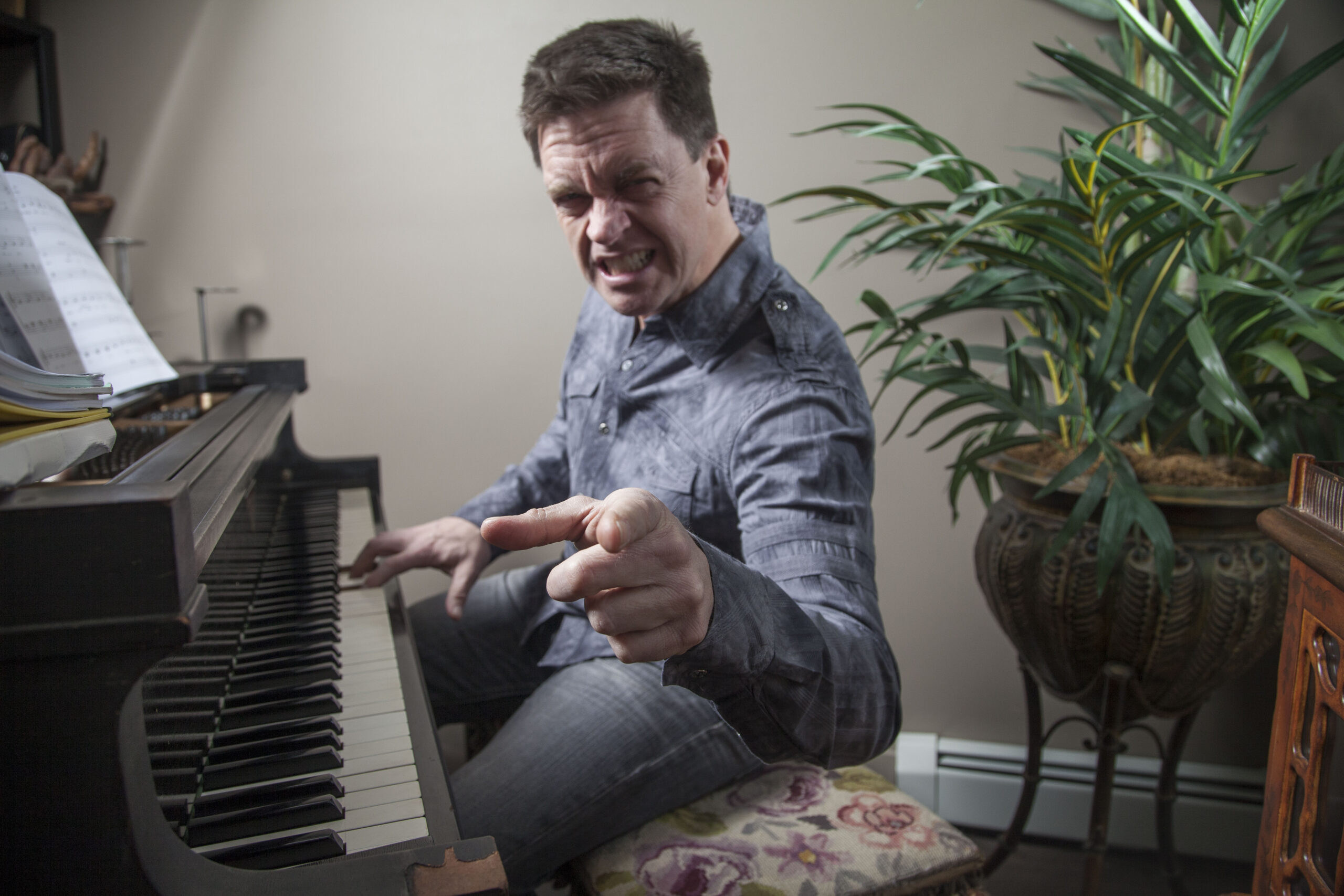 You have a career as a stand-up comedian for more than 20 years now but also having your passion for heavy metal and use it in your performance. You impersonate rock artists such as James Hetfield of Metallica and Brian Johnson. How is that all working for you?
,,Some people think I am an impressionist, but I am not. I can only impersonate what I love and what I am a huge fan of. I am very passionate about all these guys; Brian Johnson, the guys from Metallica who I know now for a very long time, Rob Halford and Tommy Lee who I crossed paths with many times and somehow it all came really natural. Hanging on street corners imitating these guys. As a stand-up comedian it definitely has put me in a different department. But I have to say putting a record out excites me more than anything I have ever done before. I am glad with what I have accomplished as a stand-up comedian and all that jazz but this is way more exciting for me and if I can continue this and make more records and tour this, I would probably much rather do this.’’

How important is humour in general for you?
,,There’s two things that make the world go round for me; there is nothing more healing than humour and music. If you can live with humility and laugh at the hardships of what life brings us than you have the best medicine in the world.’’

What are your next plans?
,,We have some festivals booked in the United States for the summer and the fall. I hope I can announce a full blown headlining tour that last at least two years, where I would mix in the music with a little bit of storytelling and a little bit of stand up comedy and make a really great looking theatrical show that I have visualized in my head. I think the success of the album will help it but either way I am going for it. I didn’t come this far not to tour. I am very confident in this product and very confident what I am gonna bring live and nothing is gonna stop me. I am dying to tour and to come over to Europe.’’

How would you like to be remembered in the future?
,,To be honest, just as a person that did good by everyone in life, as someone who brought laughter and healing. My kids, my family and my friends are very important to me. Business goes on and on and on, so as long as I can bring fun and entertainment to the rest of the world, I hope I bring a smile or a headbang to everyone that’s is out there when I am long gone.’’
—
Follow Jim Breuer on Facebook and visit his Website.