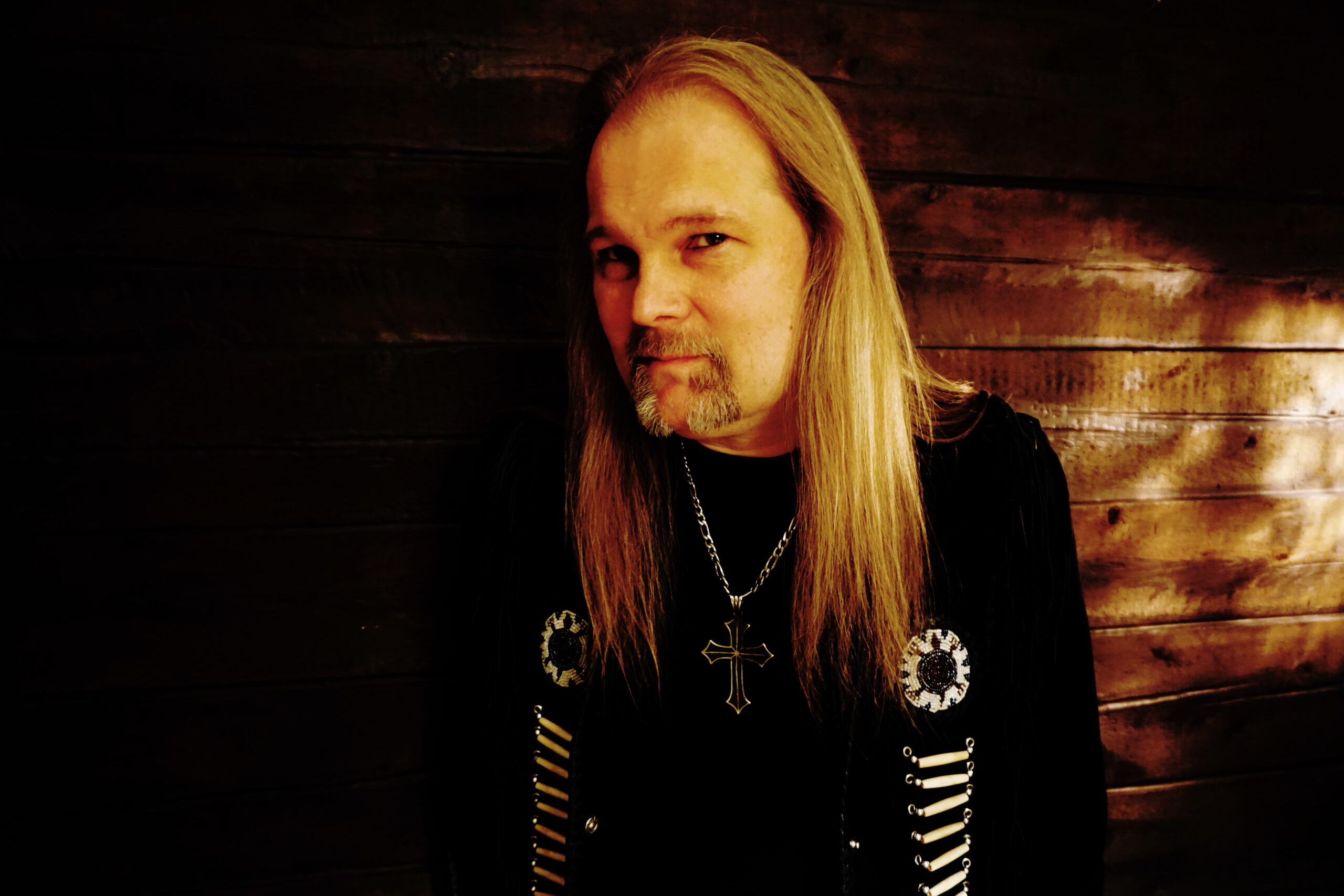 What you see is what you get

He was a member of Vagabond, precursor of Norwegian hard rock band TNT, after that he was in the Snakes, formed by ex-Whitesnake guitarists Micky Moody and Bernie Marsden. From there on a number of other bands followed like Ark, Beyond Twilight, Masterplan, a project with Symphony X vocalist Russel Allen (Allen/Lande) plus guest appearances on numerous other albums like Ayreon and Avantasia. Besides all this he also managed to release 14 albums (live and studio) as JORN, the latest a cover album titled ‘Heavy Rock Radio’. Jorn Lande is a man who, besides singing, loves to talk and still has goals. 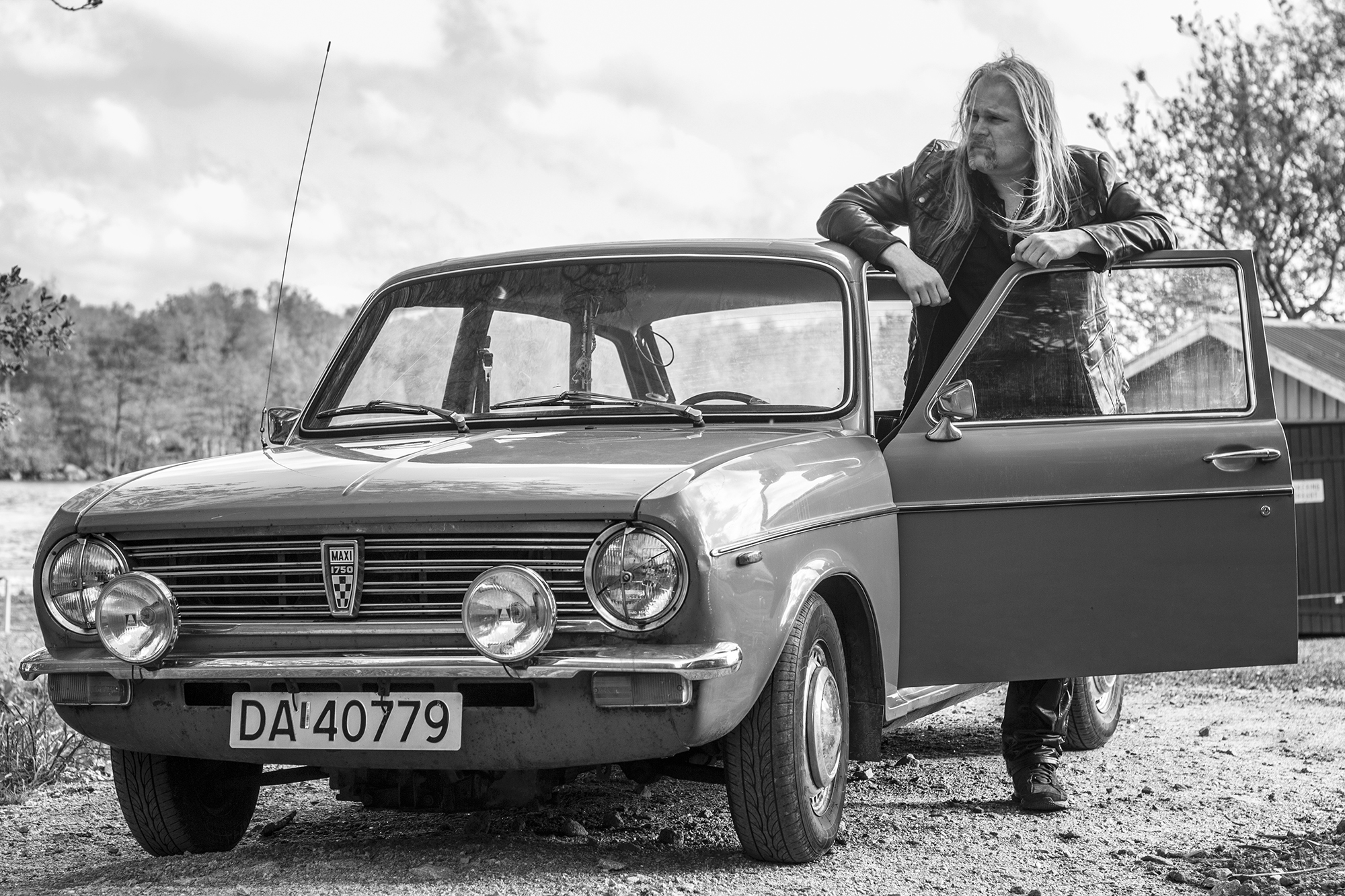 Hard to imagine but what would you have become if not a musician?
,,I’d love to make movies, being an actor, I would have stayed close to what I do, something creative, something close to my heart. Maybe a real estate agent because I love properties and am interested in architecture, that could be good. I am also very interested in classic cars so a classic car dealer also would be cool.’’

When did you know you wanted to become a singer?
,,I think Elvis sparked it. I was very young when I used to go on tour with my father who was a bass player and singer. I always fooled around with instruments. When I was around 5 years old I started to take an interest in harder music. It was in 1973 when my father came home with ,,The Ballroom Blitz’’-single from the Sweet, after that I played that loud every morning. Brian Connolly became an idol and my mum did cut my hair exact the same as Connolly’s. My first band was in 1977, I still have a newspaper clip from back then. The rest of the guys were 16-17 and I was 9, of course we didn’t write songs but we did play Deep Purple, Jethro Tull and even ,,It’s a Heartache’’ by Bonnie Tyler. But to come back to your question, Elvis came first and The Sweet introduced me to the rock thing and from that moment on it was clear to me I wanted to be a singer.’’

What is the highlight in your career so far?
,,I’m not sure, I think the most important thing that happened for me was Masterplan. Those first two albums made a big change in my life. At the time everybody was focused on cultural exchange in Europe and we went on billboards and received the European border breakers award by the EU. At the time in rock and metal Masterplan and The Darkness were the two most successful bands, selling most albums outside their respective countries in 2003/2004. Nine awards were given that year and we got one. That changed a lot, we started earning more money and we became more independent. As a result I took part in more projects and everything bloomed and I became an established artist, which opened a lot of doors. Another thing I cherish is when I was younger and worked with people I looked up to and learned from. I learned a lot and I met so many great people. Back in 2000 I joined Yngwie Malmsteen’s touring band and one tour was with Dio when he released ‘Magic’. That was special because I was a big fan and touring with the band, meeting Ronnie and the guys and sitting down having talks about music and he asking me questions about my career; meetings like that helped me a lot to make choices afterwards. Things I was unsecure about I could deal with because people like him telling me their experiences was very inspiring. When he tells you that you should stay true to yourself you listen and realize everybody has the same problem. Working with the old guitarists from Whitesnake in the nineties, people who knew the inside of things, sharing that with me at a young age helped me in many ways. I’ve been lucky to have met these great people, of course I met a lot of assholes as well but most people were great.’’

Is there a special item that you always take with you on tour?
,,I always have two travel animals which my wife always packs for me. One is from my wife and one from my daughter, one is for bringing me positive thoughts and good luck the other one is very angry looking with big horns and that’s for chasing the evil demons away. I always have them with me when I travel.’’ 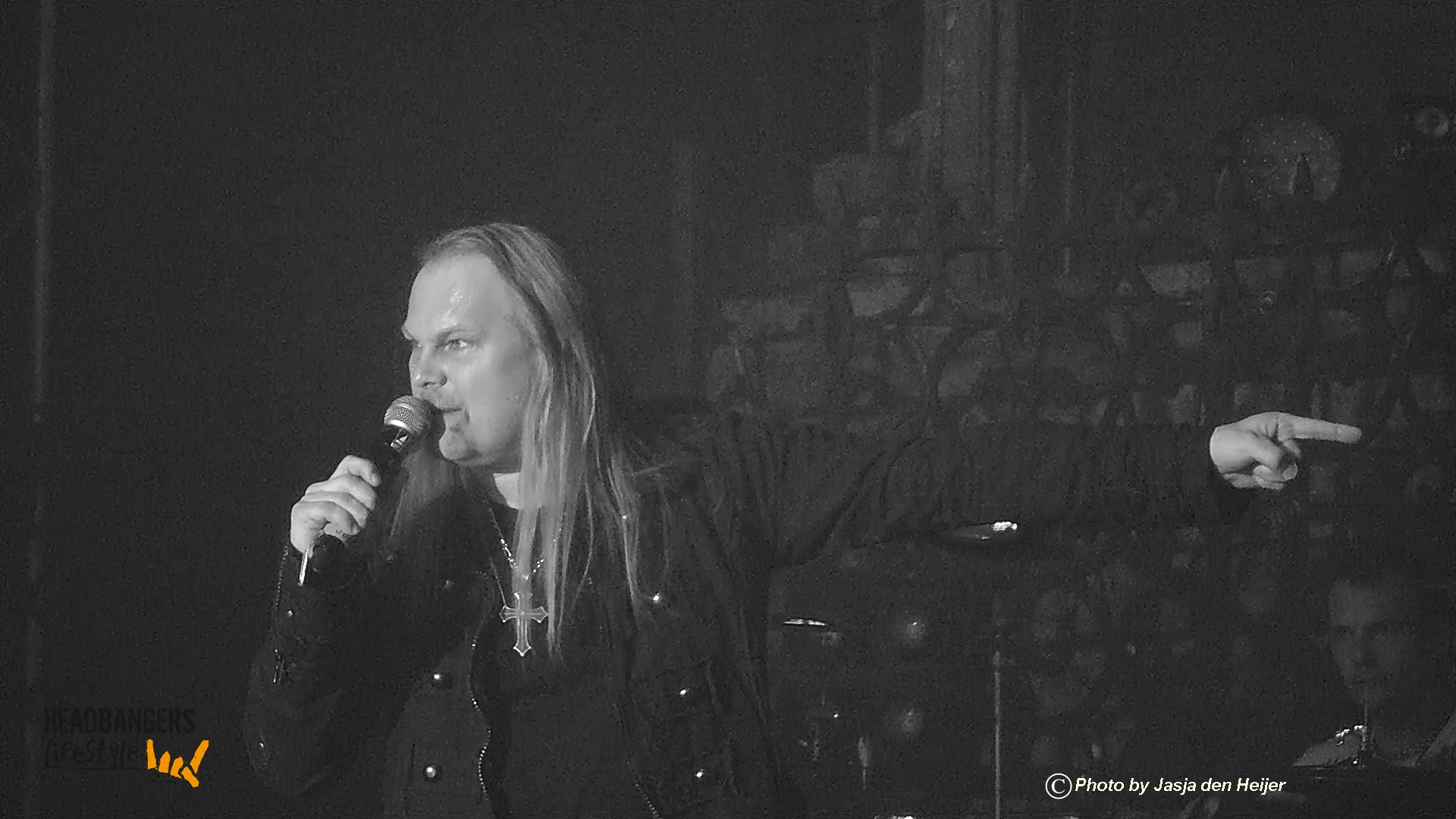 Do you have a special ritual before you go on stage?
,,Not really, I sing a bit to try to see how my voice works. Sometimes it is a bit rustier and needs more warming up, that changes. It is very individual, on the Avantasia tour some people walking the hallways singing and screaming, trying the scales, they all have their own rituals, this usually happens an hour before we go on stage. Myself and for example Bob Catley, we don’t really sing that much, I guess we both test our voices half an hour before we go on stage. You have to try out your vocal range to see how your voice works and if there is a problem I sing for a few minutes to warm up but that’s it.’’

Are you superstitious?
,,Not really, I believe that with good energy you receive good energy, a positive attitude helps you to achieve certain goals. We tend to have a bit of a negative focus and I try to avoid that. I’ll do the necessary things to make sure I am prepared and able to put on a good show.’’

What is the kick of being on stage?
,,The experience with the crowd, when people sing along and know your songs. That you can stop singing and they keep going and know all the words, that’s when you feel that you’re rewarded. You’re travelling a lot, may be tired or not having your best day and you get the respect that makes it all worth it. Some people drive for hours to see a show and I always try to meet with the fans when there is time but sometimes that’s not possible. With Avantasia, the tourmanager sometimes tells us not to go down in the pit, which is what I usually do. Especially in South America people are so wild and happy that the pressure in the front would make it dangerous for the public and often there are also kids and people who cannot get away if something happens. Usually I love to interact, that’s why you get the positive feedback. People know you’re down to earth and happy to have them there and appreciate them.’’ 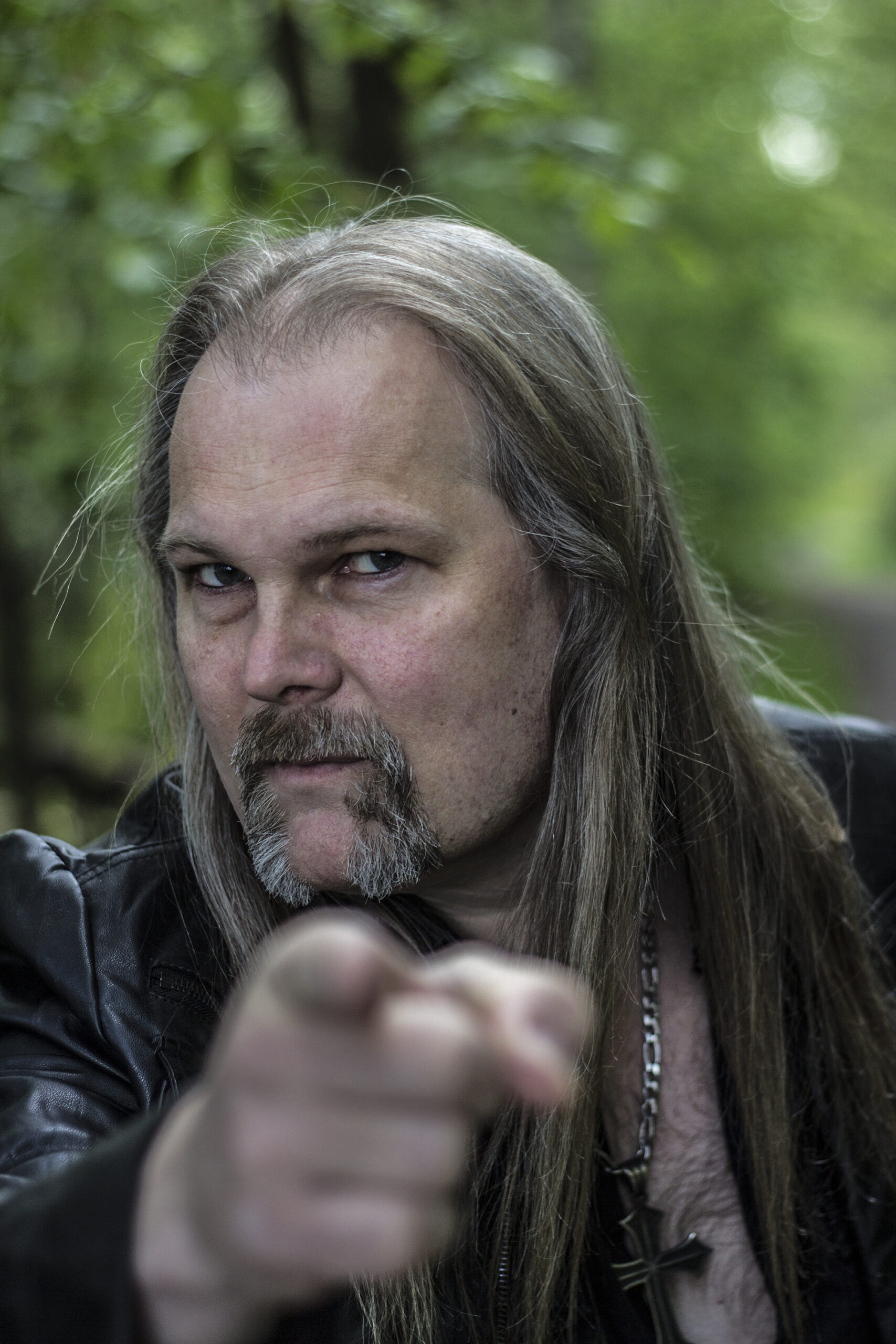 If you were asked to give advice to kids who want to become musicians as well, what would it be?
,,My daughter studies music since two years now, she sings and plays piano. My son is interested in music but I don’t know if he has the ambition. But whatever they decide to do, I will support them. I’m not sure if it is possible to live from music anymore but I’ll help them regardless. I will tell them that it is clever to have an education first and then you can do music. If you have that hunger you make it happen, that’s what I did. I went for the un-commercial heavy rock which used to be an outsider thing and not a smart move to make. My advice is: do whatever you want to do, follow your heart. You have to be really hungry and try to be happy. Know what you like and find your balance in life.’’

Which musical challenge is still on your wish list?
,,I’d love to do more things with an orchestra, not just metal with an orchestra because that’s done a lot, but more crooner stuff again because I come from a different background than a lot of my colleagues. Great songs, by great singers with great dynamics not necessarily metalish just because I have a certain talent for singing. But I tend to sign new record deals and commit to recording new albums, in a way it’s my own mistake, not that it is a mistake to make albums, you want to break free a bit and do something different, then again your company or fans want you to do what you’re known for. Of course you get offers for new records or other band collaborations and again you move away from your plans. A few years later you’re still busy with the same thing. I’m trying a bit more stuff that gives me the opportunity to cross over to a more crooner style without stopping being Jorn. I love to sing and my new album ‘Heavy Rock Radio’ is a good start to open up for new possibilities, time will tell if I continue in that direction. Important is that I am still young enough, have a lot of energy, a good range and use my voice in various ways. People often ask me for metal symphonies which are more diverse than typical metal. More dynamic, different built up. The style I have is well known and I can always do that but I’d love to do something else.’’ 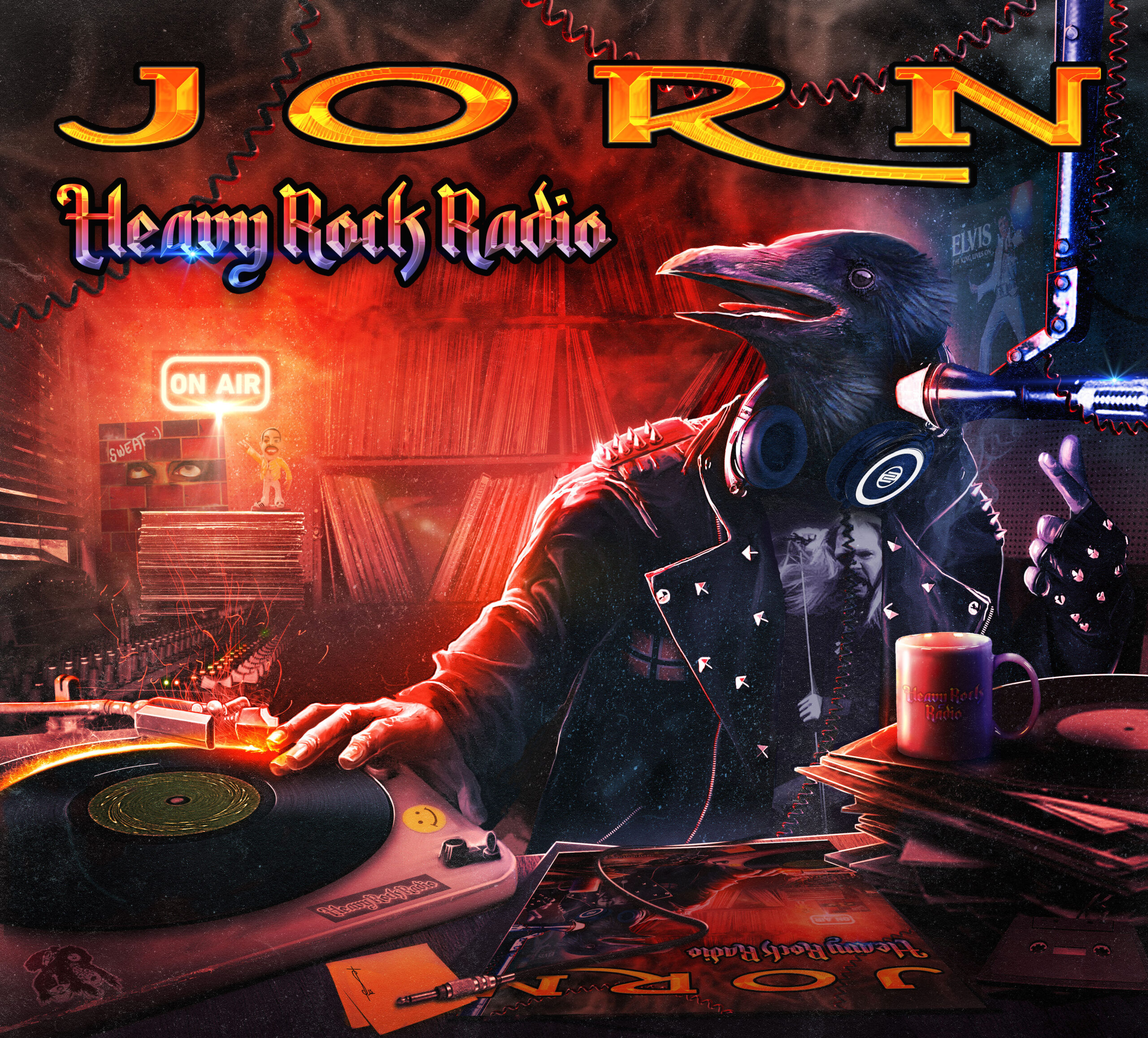 ‘Heavy Rock Radio’ and the metal symphonies are to prepare your fans for what’s to come?
,,It is the beginning of something new to come in the next few years. I do have the typical style I always do, it’s in my blood but I want to broaden my horizon and step more outside that tradition. That’s why I like Avantasia so much and the best thing is that everything is so unpretentious. One of the things I noticed is that I grew up with political correctness, you had one style, were tough and had a certain attitude. People tend to follow a certain recipe and artists had to live up to a certain image. Those days are over, even bands that started out serious are now more relaxed and talk to people. You can be who you are and allow yourself to have a good time. Today it’s okay to be yourself.’’
—
Check out the official JORN website and his Facebook page