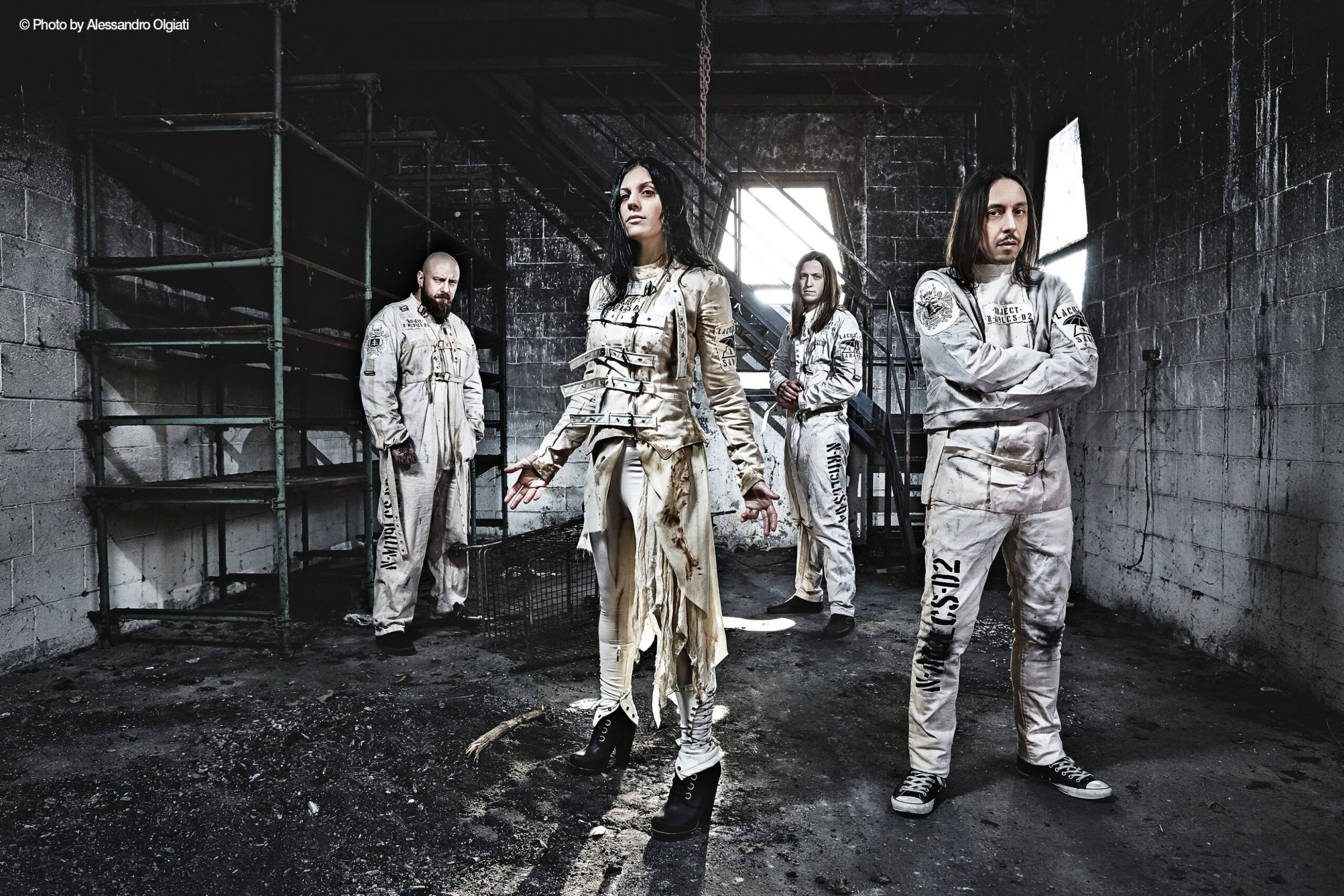 The madness of everyday life

Italian goth metal band Lacuna Coil started back in 1996 and in the early days they were seen as an oddity, coming from Italy and making goth metal. Twenty years later they are still around, very successful and it is still both singers Cristina Scabbia, Andrea Ferro and bass player Marco Coti-Zelati who are calling the shots. `Delirium’ is their eight studio album and it is the darkest and heaviest to date. Andrea Ferro explains. 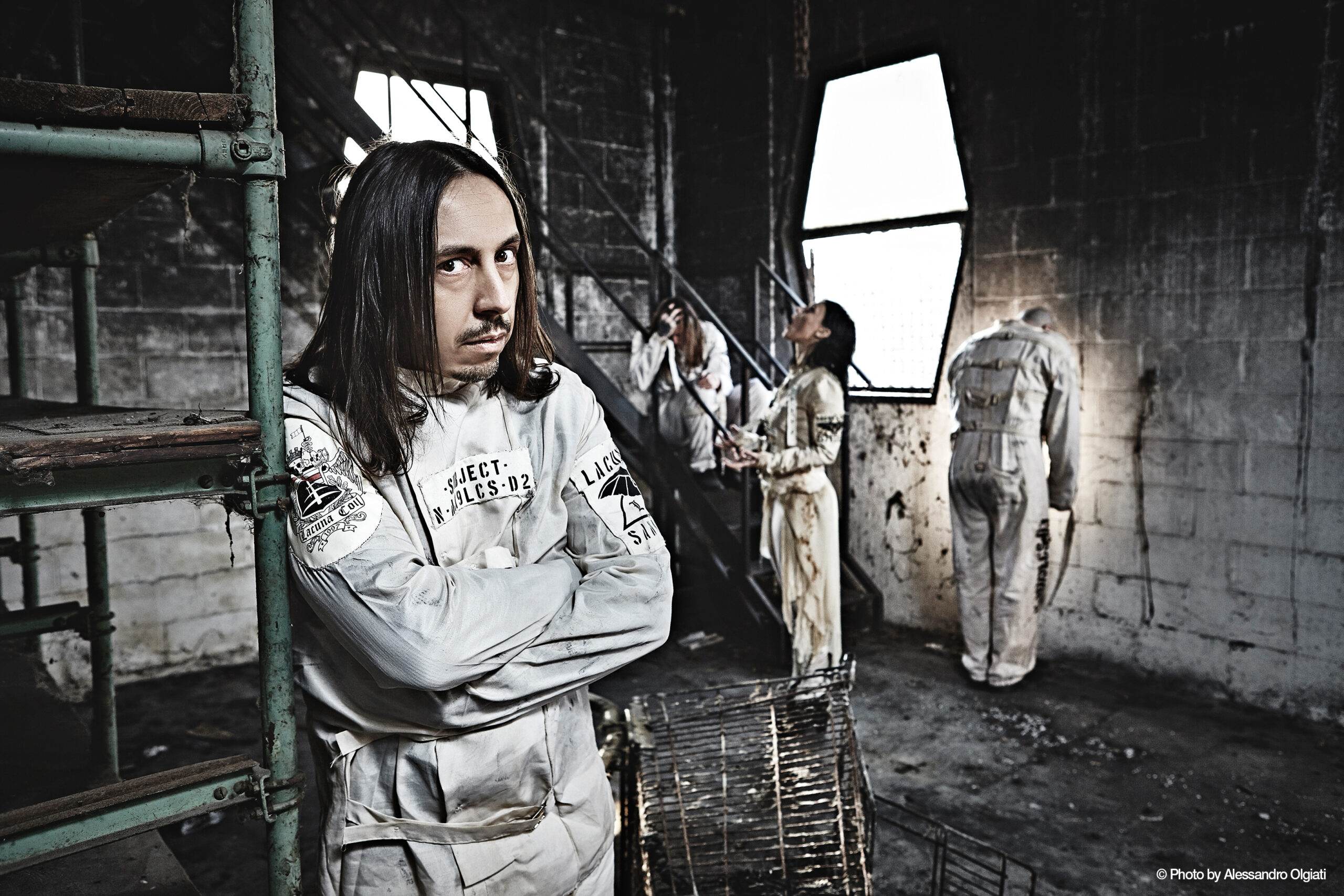 ,,We are living in such extreme times at the moment and that reflects in the music and gave us inspiration. The world we live in with all the craziness going on in everyday live but we also visited weird places in Northern Italy like abandoned sanatoriums from which we took inspiration for the visual and main theme for the album. In every room you had patients with a different illness and we used that as a metaphor for the craziness of everyday life. The little depression you can have because of your lifestyle, relationship problems, all these things you can experience in life and that goes together with the visuals, video, stage clothes. It is a strong concept beyond the music but also shows the fact that we are more free musically now. After you’ve done a few albums, like we have done, you fall into your own cliché, have your own formula of songwriting and we wanted to break away from that. We wanted to write something that was a bit different. Of course it is a Lacuna Coil record because over the years we have developed our own style. If something was going in a heavy direction we would say ‘why not’, we have a new drummer, Ryan Folden, who is really good with double bass so why not put some more double bass if we want to? We were not trying to please anybody but ourselves, follow our own direction.’’

And that was different from the past?
,,Maybe not in the beginning because then you follow the flow of the moment but now we’re more mature musicians you are aware that you’re mentally stuck in your own clichés, writing songs you always write without taking too much risks. We wanted to be more interesting again without thinking too much.’’

Did you take the easy way out before and are you now challenging yourself more?
,,You cannot please everybody anyway so why even try? ‘Delirium’ is about what we really feel, an album we are really proud of, want to play live and spend a couple of years on the road with promoting it.’’

Cristina, Marco and you are the original members, you lost a few the last couple of years because they found other challenges. Is it almost a new band?
,,It was weird in the beginning because we have been together for so many years building our career but we have a strong drive to continue. We had to reset everything, Ryan brought new energy so we decided that the four of us would do the recordings. Marco also played all the guitar parts and we brought in some guests for lead guitars. Now we are trying out a new guy for the live shows.’’

You’ve recorded ‘Delirium’ with one guitar and more electronics. How will that translate in the live show?
,,Live we will also have one guitar and the arrangements already changed a couple of years ago because Maus was the only guitarist anyway. The old stuff is rearranged for one guitar with some backing tracks where it was really important. For the new album we started thinking about one guitar from the moment we started the song writing process.’’ 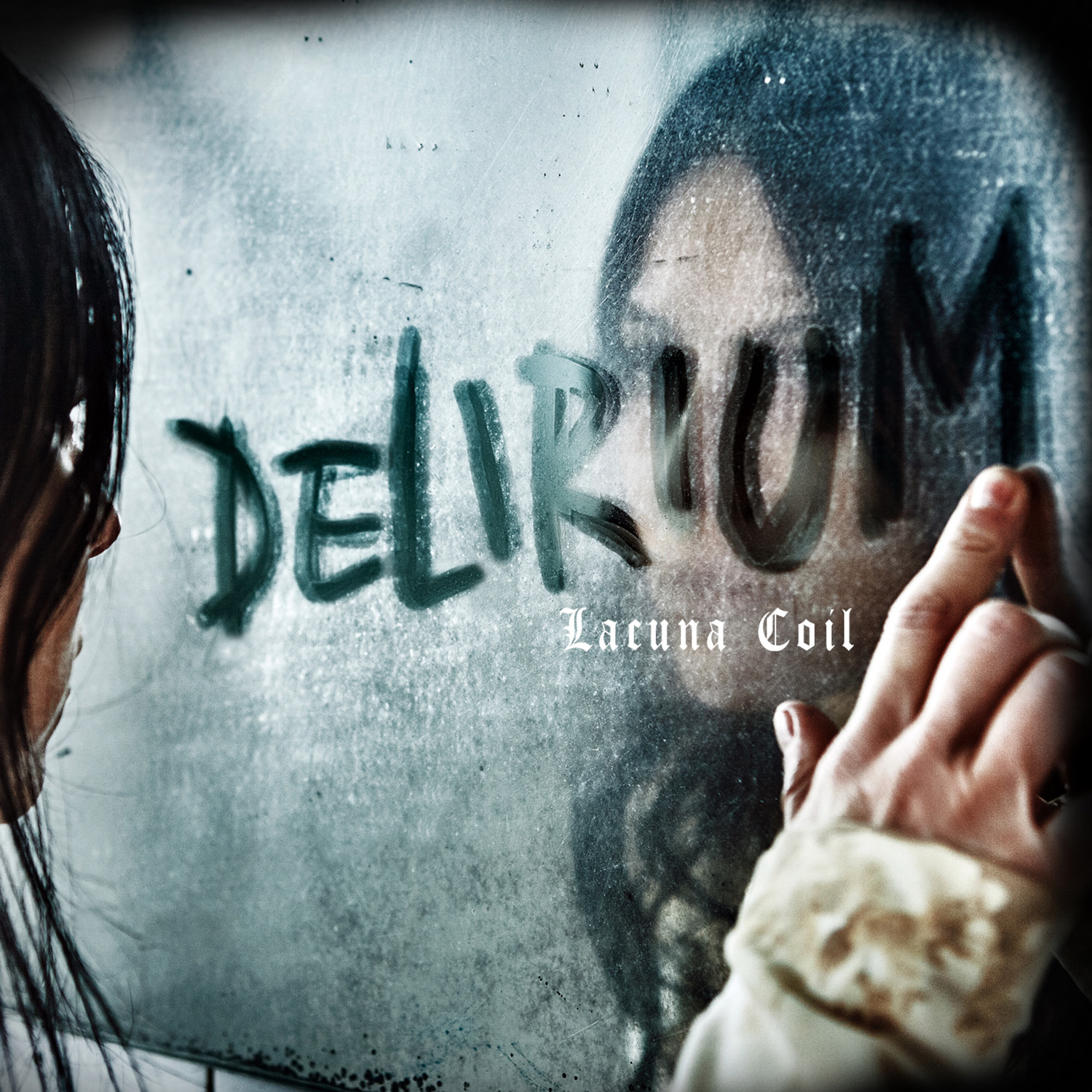 Did that change the songwriting process for `Delirium’?
,,A bit, Marco took a bit more control. He has always been the main songwriter, this time he also took responsibility for producing the album. We have worked with all sorts of producers in the past and this time we felt he had the right experience and we are proud of the result. It meant extra pressure for him but he handled it well.’’

The album came out the way you had in mind?
,,Yes, it came out close to the demos we made. There are some changes in the sound but the song structures stayed pretty much the same, we stayed loyal to the original idea.’’

You brought in Mark Vollelunga of Nothing More and Myles Kennedy for some guitar solos. Why?
,,First of all we asked them because we didn’t have a lead guitarist at the time of the recording. For us it was obvious that we would ask some friends. Myles is a friend because Cristina did a duet with Alter Bridge in the past and when we played in Myles’ hometown Spokane he visited us with his wife. We met him many times over the years and he is a great singer but also an amazing guitar player.  Mark and Nothing More did their first American tour opening for us and we kept in touch. He has a crazy style of playing and we loved what he did so we asked him as well.’’

`Delirium’ is a twelve song sonic attack. That’s different from before when there was always a ballad-like song on an album.
,,I agree, we really felt we could push the envelope a bit. Why a gothic ballad? We have proven we can write one but it didn’t fit on this album. We simply followed the flow of the song writing. I am proud of the album. We are around for a while now and for me this is some sort of new chapter.’’

Do you think the continuous touring plays a big role in the success Lacuna Coil has?
,,Obviously, the more you play, the more the name stays around. You go door to door and play in front of people. It is the old way but still the best to show people what you stand for. It also keeps opening new markets for us. We will go to Indonesia, the Philippines and China and after that America around the release date. We are receiving offers from places we’ve never been which we’ll try to fit in our schedule. It’s fantastic to see that there are still new markets to explore for Lacuna Coil.’’ 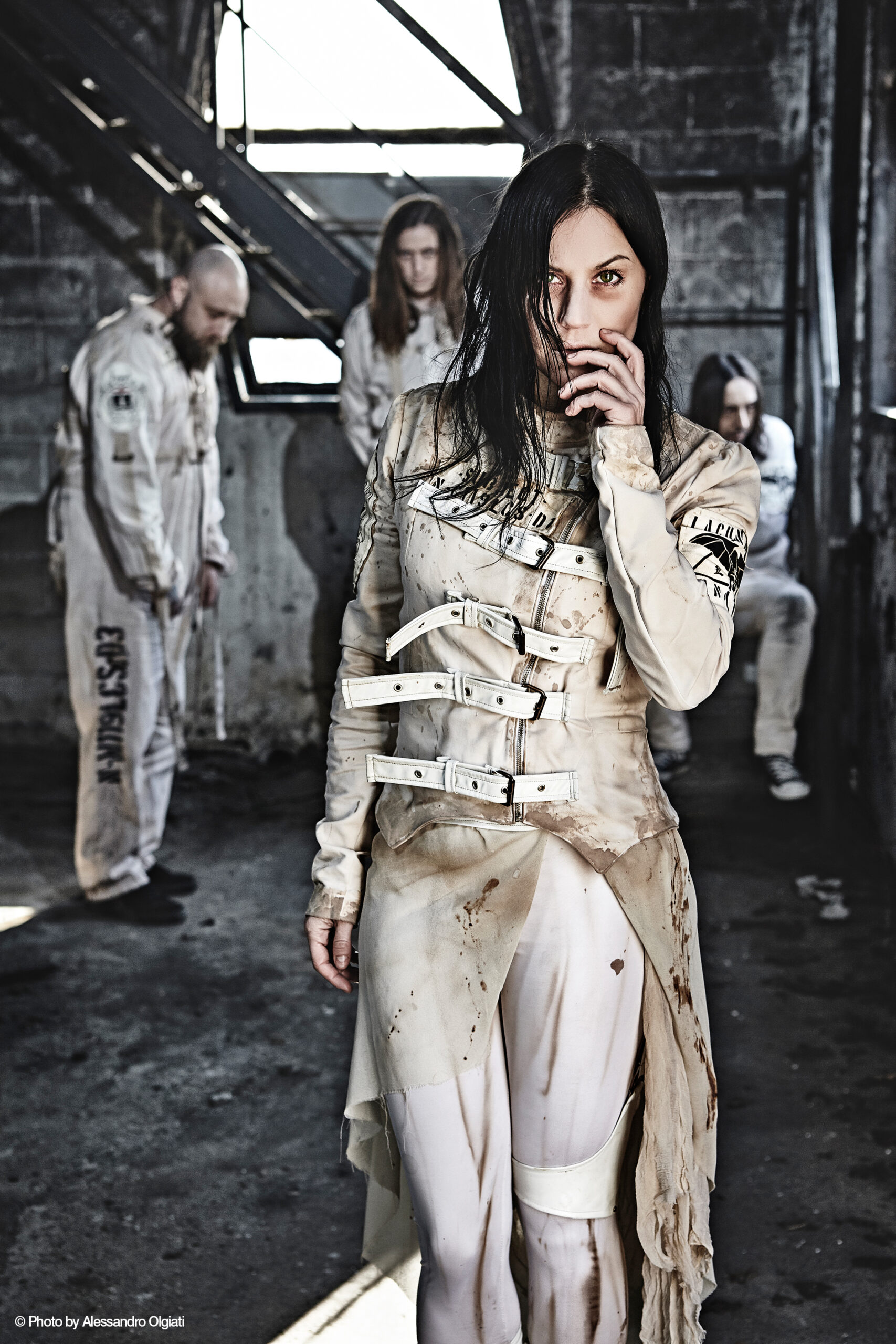 Is there one specific song of which you say ‘that is typically Lacuna Coil?
,,There’s always one or two on every record that represent our sound. On ‘Comalies’ for example ,,Heaven’s A Lie’’ and ,,Swamped’’. On ‘Karmacode’ ,,Our Truth’’ and, in a way, ,,Enjoy The Silence’’. On ‘Dark Adrenaline’ I’d say ,,Trip To Darkness’’. To me there is such a variety in our music that I don’t think one song would do justice to the style of the band. The more atmospheric parts, the Cristina oriented ballads as well as the more heavy, powerful material, the mid tempo songs, there is a bit of variety, some more striking than others.’’

What would you have become if not a musician?
,,I would be working with my passion. We design and make our own stage clothes, done the artwork. Everything connected to the music, the photos and videos is very important. Before Lacuna Coil I was writing for a skateboard magazine because I was a skateboarder. Later I was on the business side of things and working for the magazine. Of course I also had jobs I didn’t like that much but did it for the money like a delivering guy or working in a warehouse because you need money to survive but overall I am very passionate about what I do.’’ 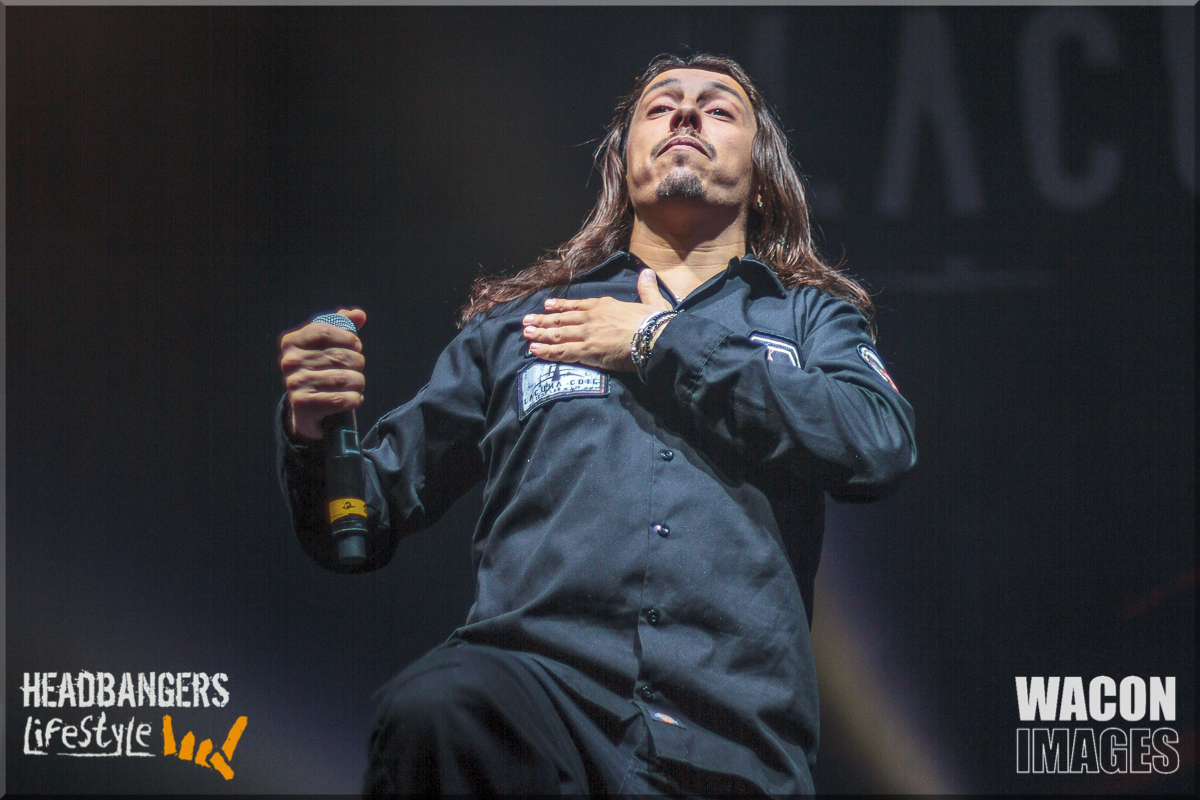 Is there a ritual before you go on stage?
,,Everybody does his own thing. Before we go on stage we put our hands together and scream something really loud in Italian together but that’s basically it. It helps to get the right energy for the show and sometimes it is even a sign for how the show is going to be.’’

What do you consider Lacuna Coil’s biggest achievement so far?
,,Pretty much everything. When we started in Milan in 96/97 there was no chance we could sign to a label but we did. Everything that happened was beyond every possible goal we had. The success in Europe and North America, the sales, being a respected band, seeing a new generation coming to our shows, still being a relevant band and being able to make a living from it.’’

Is there a special item you take with you on tour?
,,When we tour in North America we always take our coffee with us. We have our own espresso machine on the bus and make our own mocha but that’s the only thing.’’

Do you have any advice for kids who want to become a musician as well?
,,First of all, nowadays it’s a whole different world than when we started. It has changed so much, with labels, contracts, promotion. I receive a lot of offers to manage bands but it’s hard. I try to help and I am learning how the business has changed. I can’t tell them to do what we did because nowadays it’s all different. Important is to work on a specific identity as a band. That doesn’t mean you have to be super original but you need to find your own approach. You must think about the whole package of music and image and do it your own way because that’s gonna make the difference. Most difficult is having your own character and energy, you can’t fake that.’’

How would you like Lacuna Coil to be remembered in the future?
,,As a band with its own identity always following our own path. Sometimes more successful than others but nevertheless. A lot of bands take inspiration of the direction we take and that is cool. It is the recognition of a band that sets certain trends. In our environment at least.’’
—
Check out the official Lacuna Coil website and their Facebook page