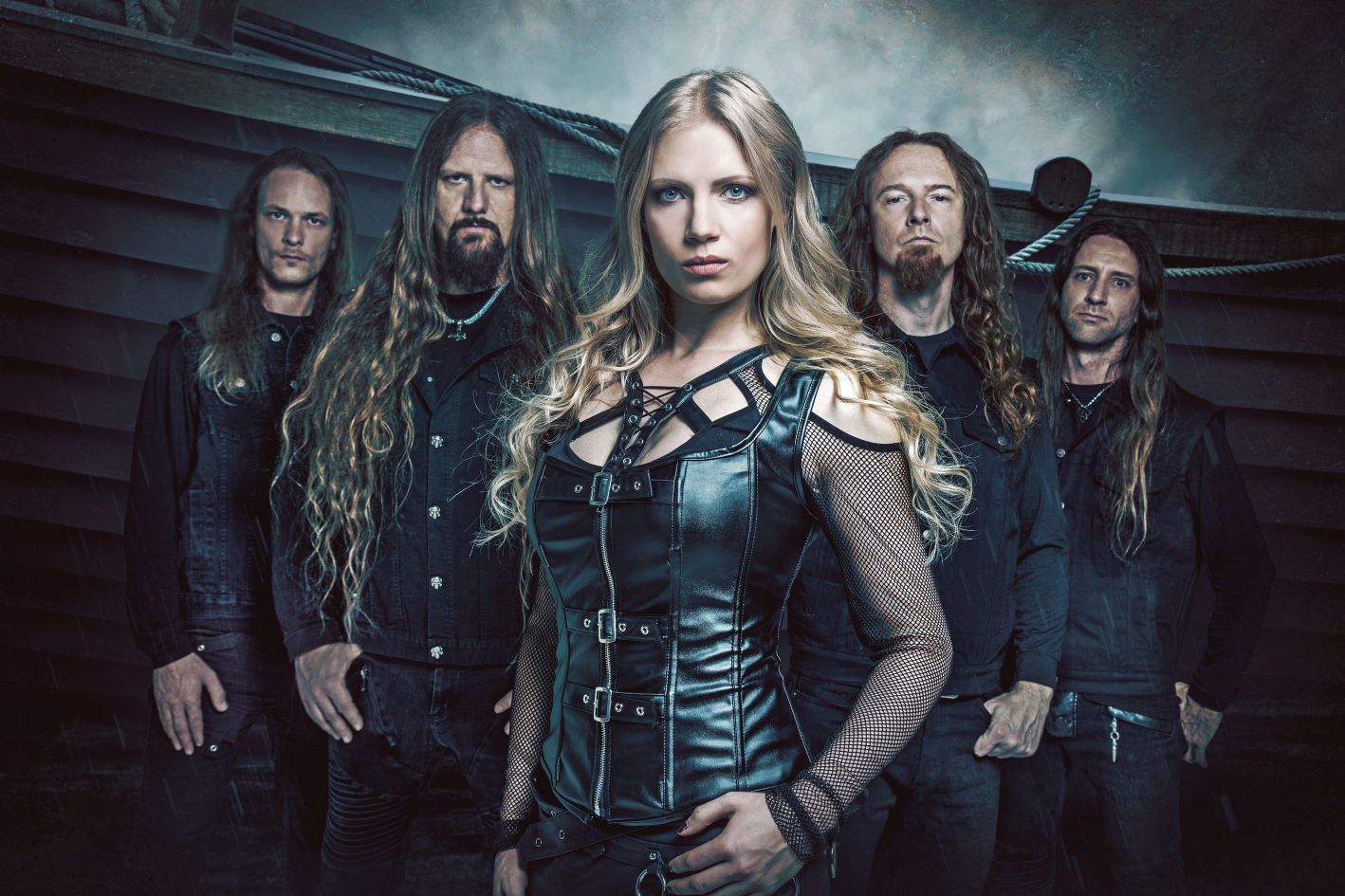 Fascinated By Sagas And Mysterious Stories

Recently Leaves’ Eyes released their seventh album ‘Sign Of The Dragonhead’ with the new line up featuring singer Elina Siirala. On this album the chronicles of the Vikings are continued, musically the band has grown and the album has a brilliant sound and the songs are direct, powerful and mystic. ‘Sign Of The Dragonhead’ is the first album without former singer Liv Kristine, who is replaced by the Finnish vocalist Elina Siirala, who has a crystal clear voice that dominates the sound of this new album. Singer, composer, producer and main man Alex Krull and Elina are on a promotion tour for the album and I had the chance to talk to them for Headbangers Lifestyle. 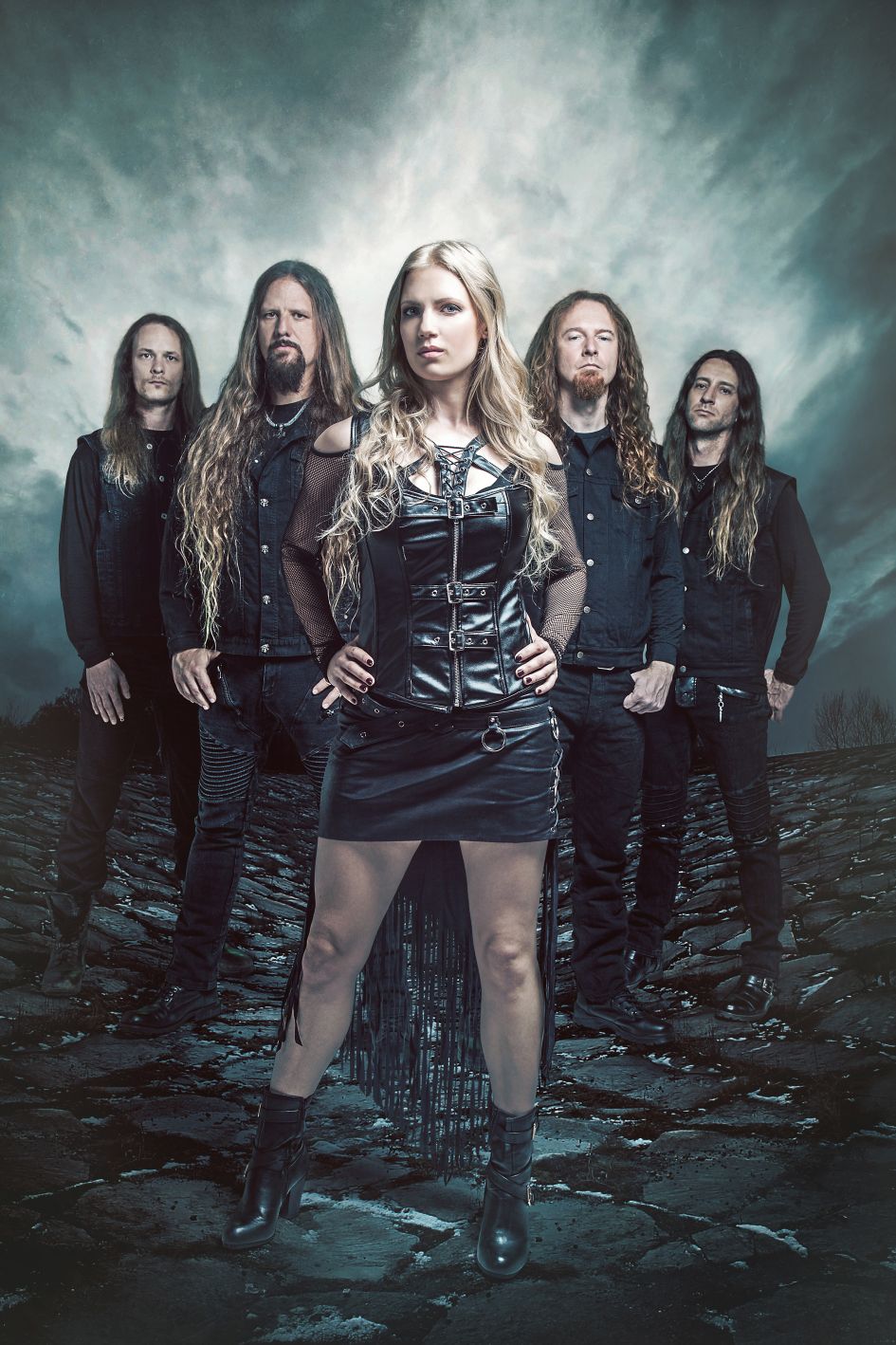 Alex, are you happy with the reviews of your new album so far?
A: ,,Yes, they all were very positive; we did not read or see any negative review, so far… ha ha. No, they were all quite good actually so we are very happy and proud with the reviews.”

Do you really care about bad reviews anyway?
A: ,,Music is always a matter of taste, but of course it depends on the kind of person that writes the review. What I do not like is unfair criticism, somebody who does not like certain kinds of music but tries to be an expert on all kinds of music and therefore is writing rubbish. I know how much time bands spent on making an album because I also produce other bands, so it can be very frustrating to read negative reviews. For example, a death metal band that gets reviewed by someone who only likes AOR or classic rock and therefore probably does not like grunting and growling makes no sense, right ha ha….That is not cool. Besides that we always want to improve ourselves, so we always do our best, but we do not make albums for the critics, we make music for ourselves because we like it! The music has to come from the heart and then it is always good. And if somebody does not like our music, tough luck, forget it, ha ha…”

Elina, how was it for you to record the first album with your new band?
E: ,,Haha…a completely different process obviously as with my own band, as I write all the music and the lyrics for my own band and I am involved in every aspect of that band. So now with Leaves’ Eyes it is a bit the other way around. I, as a singer, come more or less at the end of the process, so…”

Alex, could you tell something about the story of the ‘Sign Of The Dragonhead’?
A: ,,Of course, no problem. In fact it is not a real concept album as some songs stand on themselves. The album starts with the title track which is lyrically connected with the previous album where we took the character of Harald The First as a symbol of the Viking Age and unification of Norway and that was the start for the Vikings to spread out over the world and expand their influence. It actually is a great saga and the new album explores that saga deeper and deeper. But there are also other stories, take for example the song ,,Like A Mountain’’, which is lyrically based on an Islandic saga and which shows the mystical side of Leaves Eyes.”

Leaves’ Eyes is a “kind of” German band, so why this fascination with Nordic mythology?
A: ,,I have always been a kind of history nerd, ha ha, and when I started a metal band I always wanted to combine history with music, so, there you go. My father is from the Baltics and I always liked sagas and mysterious stories, so I have to use them in our music, ha ha” 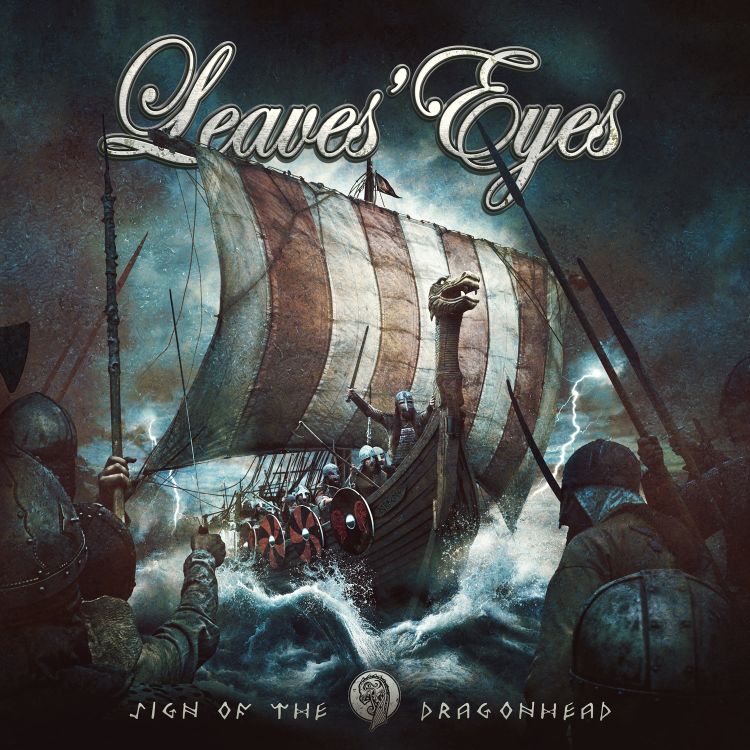 On ‘Sign Of The Dragonhead’ I hear a lot of folk influences, there are choirs and you use authentic old instruments, right?
A: ,,We love that. We write the music and we think about all these melodies and influences but we never know how they actually sound. It is an exciting process to experiment with old and authentic instruments to create a certain sound and atmosphere.”

How are you going to do this during live shows as you probably cannot bring all these instruments, players and choirs on stage?
A: ,,That is going to be difficult, yes, ha ha. We would love to have all these players and instruments and choirs on stage but I think we cannot afford that all the time; so maybe we could do a couple of special shows. For the rest we will have to work with backing tracks but that is not a shame as long as it sounds good. We are a metal band and that is what always should stand out.”

Are you looking forward to sing the new songs live on stage?
E: ,,Yes, of course, we already did three release shows and they were great. We played five new songs on stage and they all worked out fine. We start with the tour in Paris in April.”

What is your favourite track from the new album to sing?
E: ,,That varies, but one of my favourite songs to sing right now is probably the title track; it has a lot of energy and my voice really sounds great there.”

Could you please elaborate about the reasons why Liv Kristine left Leaves’ Eyes, as there are still a lot of rumours going round about that….
A: ,,It is just rumours and nonsense and I think we are quite done with that, finally, ha ha”
E: ,I did not get involved in that at all….. I mean it was understandable that there was a lot of surprise and sadness and of course there were “hard” reactions, but there is a big difference in what you say or write, well if you say something stupid you kind of shoot yourself in your own foot. It was a big discussion, but you always have to try to be constructive, right?”
A: ,,We gave out a statement and she wanted to leave the band, so, you get a lot of fantasy stories and I hate that. I did not understand that and we had nothing to do with that negativity.”
E: ,,For me, I did not hear or read anything negative about me. I stayed away from it, dealing with the music is far more important for me. I was kind of in my own bubble, ha ha…”
A: ,,It is not very smart that you feed so called hate groups with fake and fantasy stories behind everybody’s back, that is complete bollocks. I did not say anything!! If somebody wants to leave the band then what can you do? It is also not fair for the new singer. However the fans always stood behind us and that is positive for the band.” 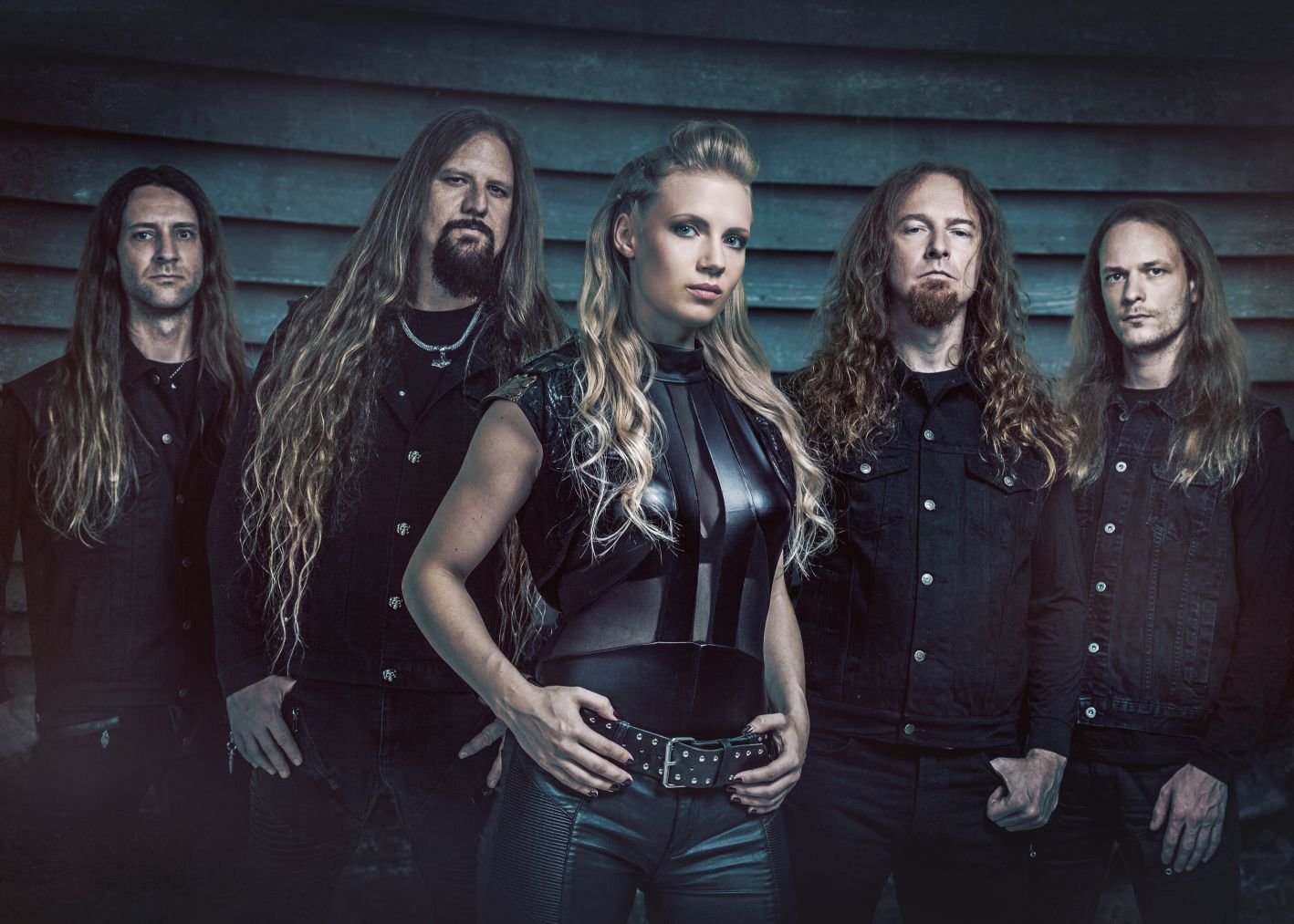 Was it hard to find a new singer?
A: ,,Yes it was, as we had to find a new singer within a very short time, we did not want to take the long road by doing auditions as that takes way too long. We needed a great live performer, a great singer and she had to have a passion for music. Furthermore we were not looking for a temporary replacement and as a flash it came to me, I knew someone with whom we had played before and that was Elina and I gave her a phone call right away and that was it, ha ha….”

So, you decided on the spot to say yes?
E: ,,Yes, I mean, of course, to be honest, I had to decide very quickly, I did not have much time to think about it, which was actually a good thing because otherwise I would perhaps have said no, ha ha…. I am a perfectionist and if I had more time I would have started doubting and hesitating, so.. But, I said, okay, let’s do it, go for it, so I jumped in and I do not regret it, so far, ha ha….”
A: ,,We are all very glad that she jumped in, we have played together before and Elina’s family is all about music, so she was perfect for the job.”
E; ,,The next day we already recorded a song which I learned during the night before the recording, so….ha ha”
A: ,,I would call it a very lucky situation.”

What are your main musical influences?
E: ,,Oh, that is such a difficult question. I mean, obviously, when I started singing I was listening to classical music a lot and classic stuff like The Platters, Nat King Cole and mainstream music. People that really influenced and impressed me were Placido Domingo (tenor, opera singer, MK) and Freddy Mercury, one of the best frontmen ever.”

,,If in Wagnerian times there would have been electric guitars, Wagner would have used them in his music.”-Alex Krull

Speaking about classical music, I hear Richard Wagner influences in your music, or am I completely of track here?
A: ,,No, you are absolutely right, ha ha. On the second album ‘Vinland Saga’ we already used a lot of Wagner characteristics and that was in 2005 and everybody was saying: what are you doing? But now, it seems to be okay to use classical influences in metal music. I think that if in Wagnerian times there would have already been an electric guitar Wagner would have used it, ha ha…” 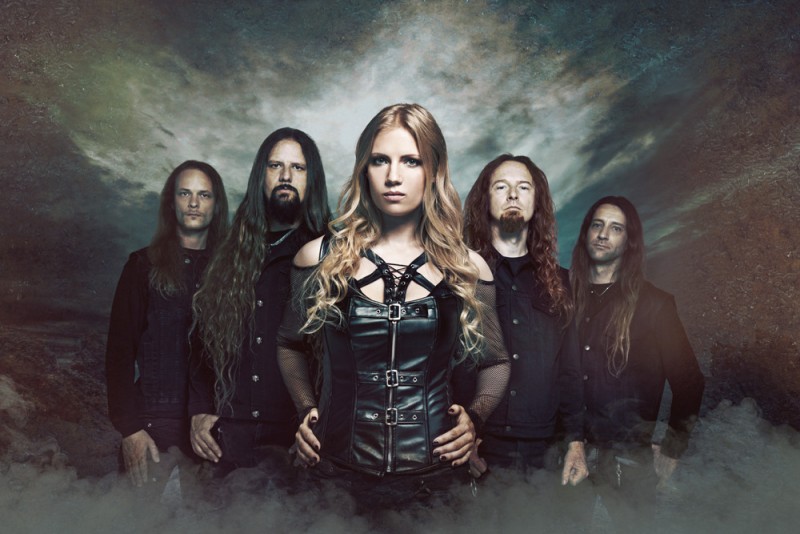 Any plans for a DVD?
A: ,,Yes, there will also be a tour book edition coming out soon, I hope, ha ha and also a DVD, hopefully very soon. We have some ideas already, so it is coming, just wait.”

What is your favourite band to go on tour with?
E: ,,Oh, musically, oh…. Dear, I don’t know… Iron Maiden..
A: ,,Good choice Elina, ha ha..”
E: ,,Queen would have actually been my first choice, but that is not possible anymore, so”

Nightwish and Leaves’ Eyes would be a great package…
A; ,, That would be a perfect match indeed. Tarja would also been nice, seeing that she is an old friend and a great singer and performer.”

Will we be seeing Leaves’ Eyes on any summer festivals this year?
A: ,,Yes, Wacken in confirmed and maybe Graspop, who knows. We always love playing in the Benelux, as these shows are always great with very enthusiastic audiences.”