In 1990 American guitarist Michael Lee Firkins released his well acclaimed instrumental debut album [which brought him an Edison Award, the Dutch version of the Grammy] and that album sold more than 100,000 copies. Now, 28 years later Firkins, has extended his discography up to seven albums, of which six are completely instrumental. His last album, ‘YEP’, “finally” contained vocals and now Firkins is on tour and playing a gig in Landgraaf together with Barend Courbois [bass guitar] and Chris Siebken [drums]. Before the show HeadBangers LifeStyle had the chance to talk to Michael.

Remember this [I show Michael my copy of his debut album] one?
,,Yeah, sure, man, still a great album and it is almost thirty years old…” 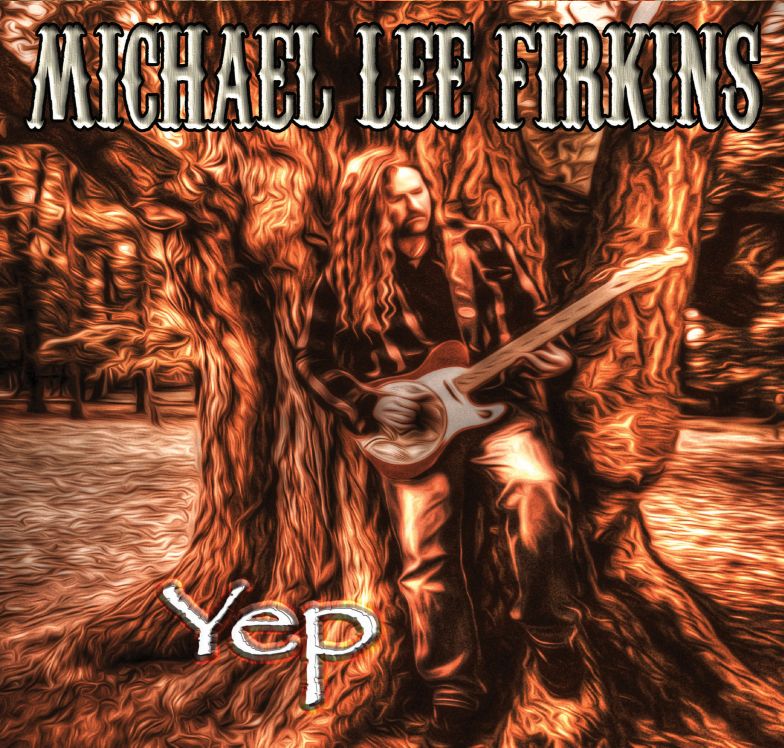 Five years ago you released your last album called ‘YEP’, isn’t it time to bring out a new one?
,,Yeah, I did, I released a new EP for this tour exclusively. I don’t want it on Amazon or Spotify, so you can only buy it at my live shows. There are five songs on the EP and they all have vocals. By the way I played every instrument myself on that EP and it was fun being able to do it all by myself. If you ask other musicians to do it, it will cost you a lot more and it is maybe only 10% better, so it is better doing it by myself.”

‘YEP’ was the first album that featured vocals, how did that happen?
“Well, actually there were some vocals on the ‘Black Light Sonatas’ album, which came out in 2007, so… So, on ‘YEP’, it is all vocals, yeah, it completes the music, but I probably record an instrumental one soon. I like it all, vocals, guitar, both, it is all connected, it is all melodies, so…”

When did you start playing the guitar?
,,When I was eight, ha ha… My dad was a guitar player and my mother played the piano, she was very good actually; so I heard music all the time and that helped to develop my musical hearing and understanding. I didn’t have any training in notes though and you know the nineties and the guitar, that was it, right? The nineties were a great time for guitar, you know, ha ha… I had one classical guitar as well, actually it was my first guitar, but I do not know how to play schooled classical guitar stuff, no, not really. I learnt playing the guitar by listening to other players and imitating them, but I also had a couple of teachers and I can read notes a bit. However, I do not need that at all as guitar playing is all about feel, emotion, passion, you know…”

How do you come up with new songs?
,,To me, I can write a song in one take, so from a riff or a hook; I have a tape recorder and I hit record as soon as something comes up! Mostly it comes to me in five minutes and seeing that there is no way to remember it all by heart the next day I tape it all, ha ha…. Sometimes I dream about a good song, wake up and forgot all about it, but then I still have the tape and later on the day I listen to the tape and then I remember that song. Songs come very quickly, as it is rather easy to create new songs; for a long time it wasn’t, but not anymore. I was always a couple of songs short for an album back then. But since about 10 years or so I have started composing a lot, so I have a big catalogue of songs now.” 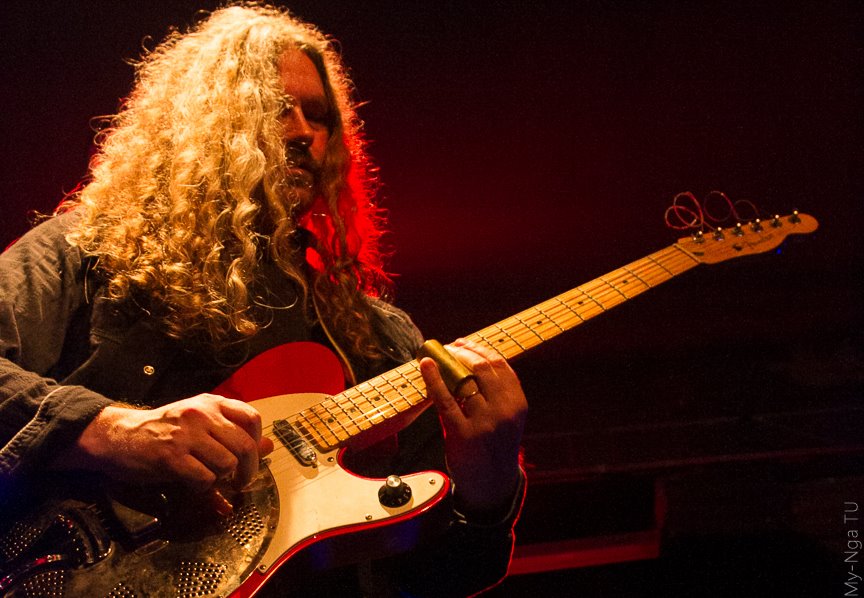 Your debut album was a real commercial success; does that still “haunt” you?
,,No, it was a different time, you know. By the time my second record came out, grunge was already come and gone, ha ha, you know. I remember when I came out with my debut and it was really doing well, to my surprise by the way. I flew over to Europe and I remember Roadrunner Records were saying that even Satriani and Vai were not selling so many records as I did, man, that was scary. It is always like that, you know.”

Is there still a market for instrumental guitar music?
,,Oh, yeah, there are so many guitar players doodling on Facebook right now, ha ha; more than ever, really. It is just I think; a lot of kids like to play themselves, so they are not worried about me, or the other guitar players. I want to play, I am a kid and I am good! Well, that is what they should do, I mean.” 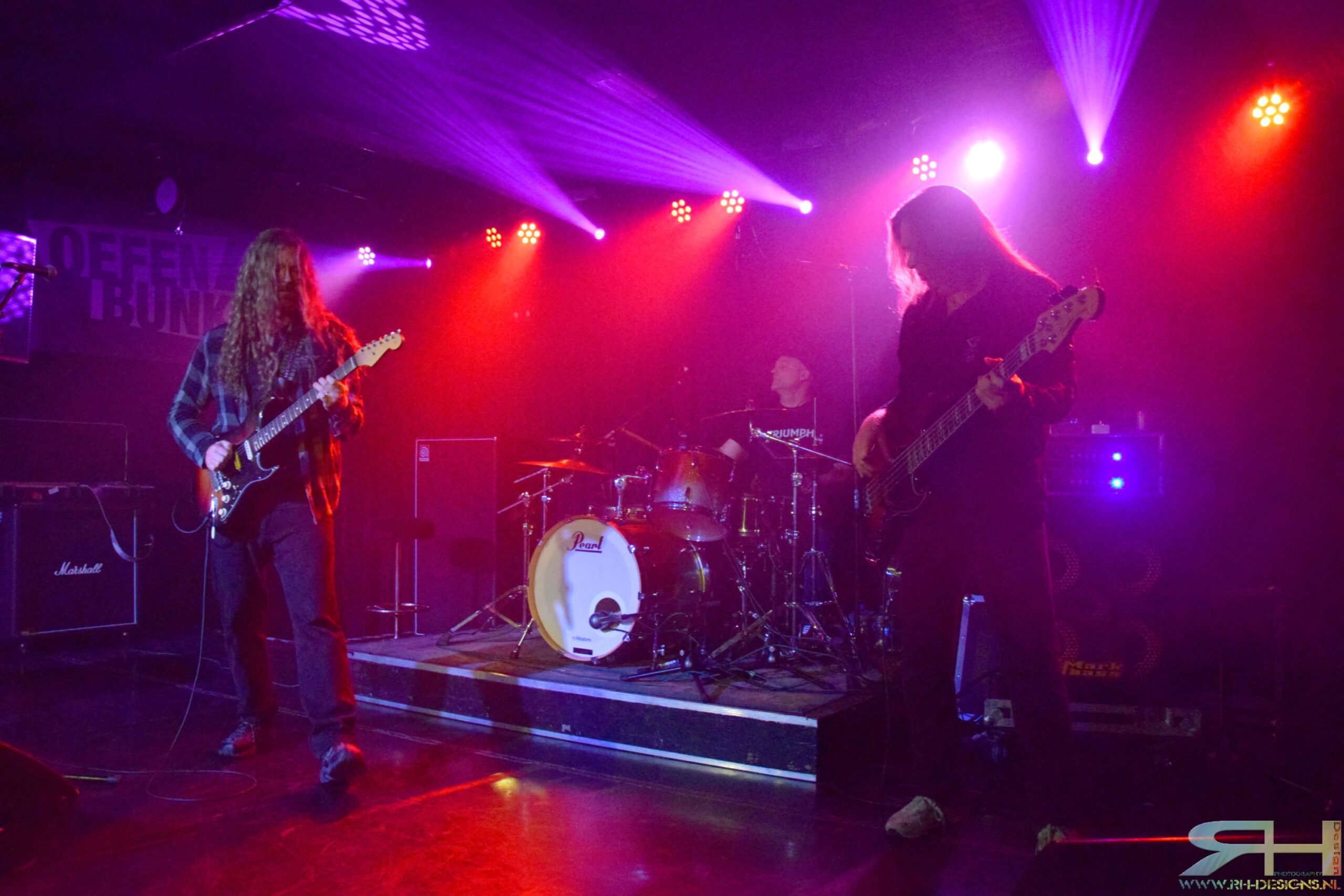 What are your main musical influences?
,,Well, uh,,, my earliest influences are Lynyrd Skynyrd, AC/DC, Black Sabbath, Led Zeppelin, you know, the standard classic rock. These days I try to listen to a lot of classical music and different sorts of instruments, like Louis Armstrong, anything but guitar, ha ha.. No contemporary music, only stuff from the seventies and eighties; I am also no metal head, my metal is old school metal, Judas Priest for example. As far as the real heavy stuff is concerned, it is not for me, but I recognise what they are doing.”

Was there a record that changed your life?
,,’Second Helping’, the second record of Lynyrd Skynyrd, yeah, well it was the first time that I heard the song ,,Sweet Home Alabama’’, so, you know. That particular record is their best album ever, as every song on that album is just great, the flow of the songs is just excellent. And I liked KISS; the early days that is, their album ‘Rock And Roll Over’ was amazing. One of my favourite bands however is The Who, I love The Who, they are my number 1 British rock band and my favourite Who album is ‘Who’s Next’.” 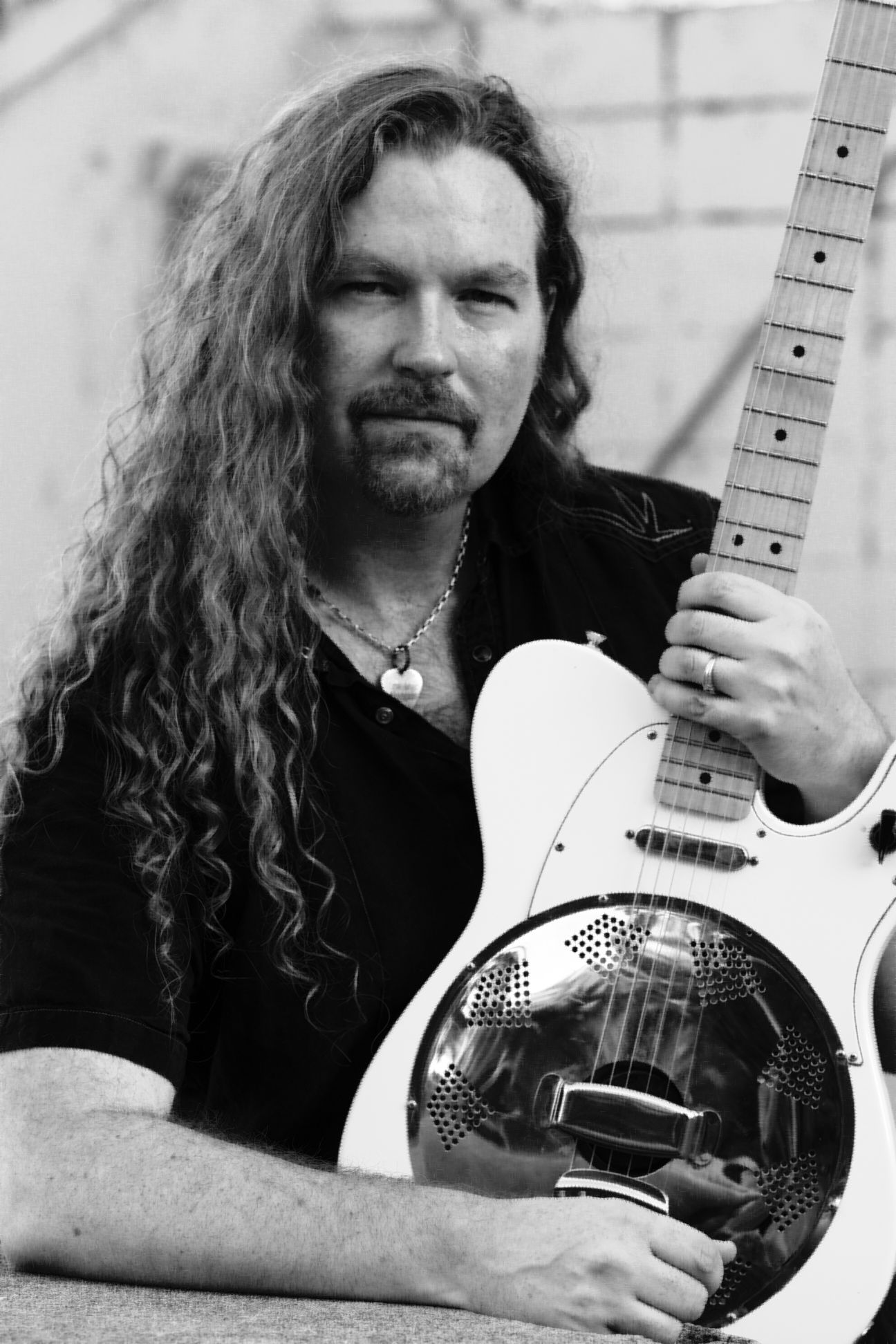 Describe yourself as a musician please.
,,Uh, well, very creative I think; showmanship is not important to me. I am a real artist, and an artist does not care about what other people think and I don’t really care what people think. Of course I don’t want to hear that they do not like something, ha ha, but I do what I wanna do; that is different than guitar players who are trying to please people.”

So, you are not competing?
,,No, I live a good life back home and I am enjoying my life, so…. No financial problems, not really, ha ha… I would like to teach again maybe, but there is so much competition on line nowadays. I am old school, I want to make records, I like making albums, I like recording albums and I like playing guitar. Being popular that comes second, I am NOT impressed by famous persons!!”

Ambitions left to fulfil?
,,Yeah, being a better musician, making better records. I still want my records to get out there; I still want them to be recognised. But the record is the last thing these days and I do not like that at all.”

What are you proud of?
,,That I just followed my gut. I am happy now, I do what I want to do, and I followed my dream.” 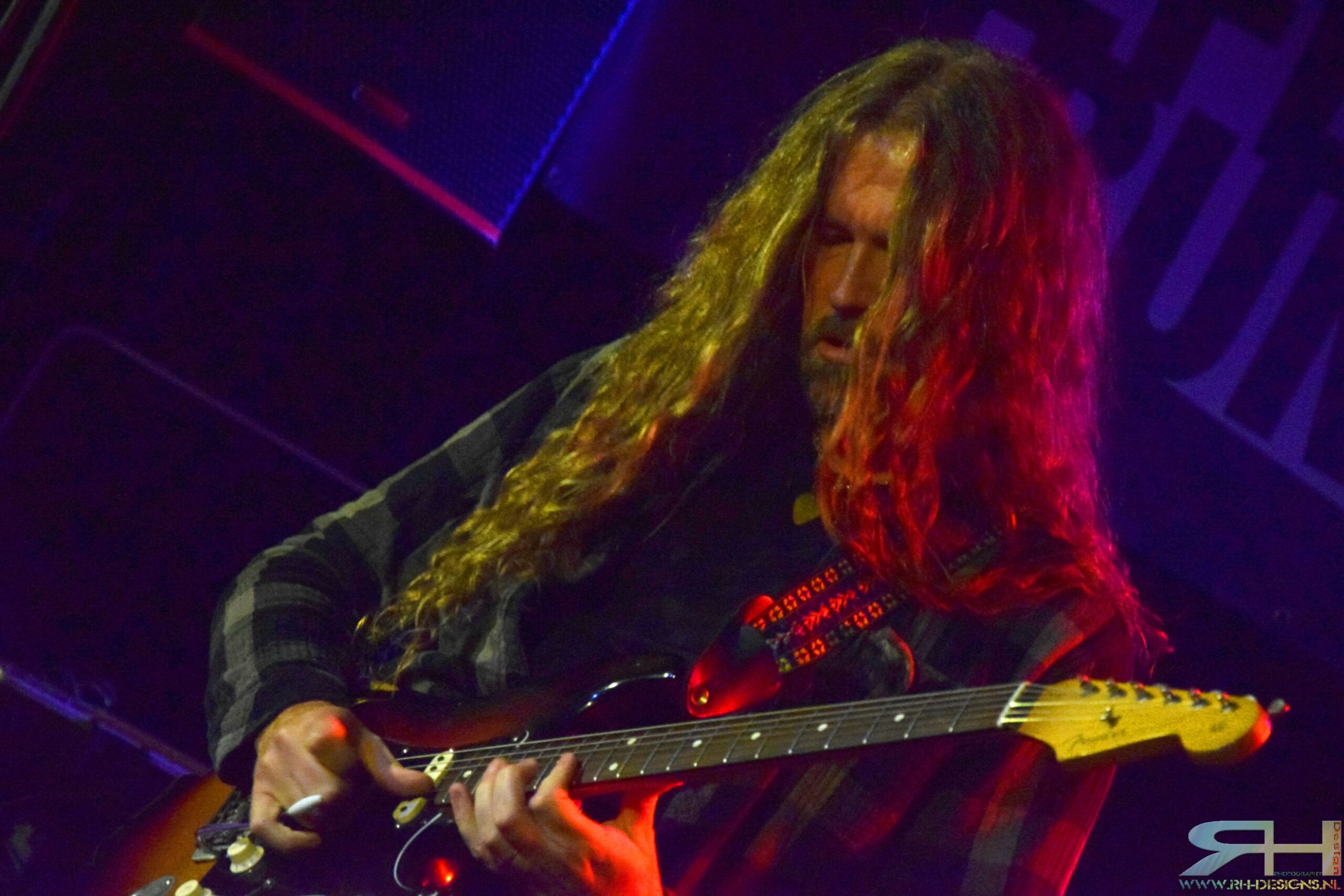 What is your favourite guitar?
,,That is the toughest question so far….. I like Gibson SG guitars and I love Fender Telecasters, they have a huge sound, they are really awesome!”

Your best guitar solo….
,,Oh, mine, really, wow, probably the one in ,,Laughing Stacks’’, the opening track from my debut album, or maybe ,,Deja Blues’’, also from that album; I really like that solo, but most songs are not about the solo by the way…” 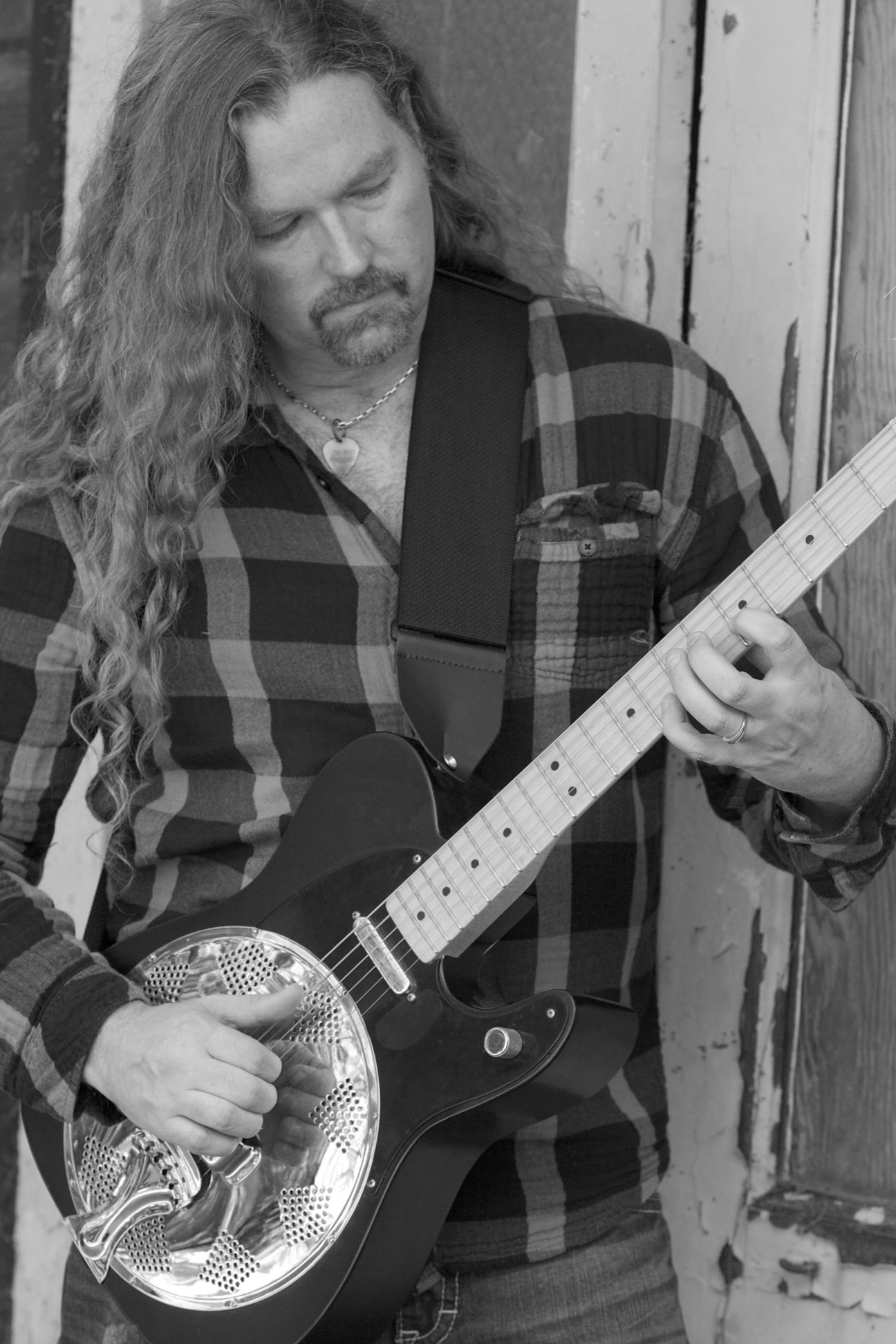 What’s your opinion about Jimi Hendrix…
,,He was amazing, yeah, you can always hear him on the radio, classic rock radio, he is always around; I love Hendrix. People always say he invented this and that but I do not like to worship people as the first person who did something if you know what I mean. Hendrix is super and no one has ever done what he has done on the guitar and he sounded so complete, man. Furthermore he did it all in a year or two and he played the blues like no one ever did and will do!”

What do you do in your spare time?
,,I like to hike with my dogs and I am still addicted to music. I want to do more music, I’m still very driven. I have got to write songs and I cannot just not practise as I get older, right, ha ha…? So, I still play every day to keep the touch, chops go away if you do not play. It has already been two years since I last played live gigs and I love being on the road. We are doing 27 shows now in a row without breaks and we get better every night.”
—