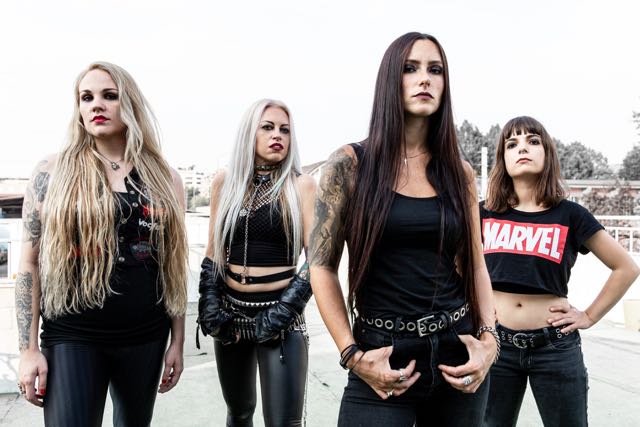 Founded in 2010 and after releasing three studio albums [`Victim Of Yourself’, 2014, `Agony’, 2016, and `Downfall Of Mankind’, 2018], Brazilian all female Thrash Metal trio Nervosa went through an unexpected major line-up change in April 2020. But, founding member, guitarist Prika Amaral found herself a new vocalist [Diva Satanica], bass player [Mia Wallace] and drummer [Eleni Nota] in no time and the new formation didn’t hesitate to write and record a new album right away. `Perpetual Chaos’ is the fourth statement of Nervosa, it sounds raw and relentless and there is no doubt this female force is more than ready to attack and stir up the extreme metal scene! To get some insight about the line-up change, the new band members and the album itself, I got in touch with Diva Satanica.

How did you learn Nervosa was looking for a vocalist and why did you want to have the job?
,,Prika sent us all a message asking if we wanted to do an audition for a position in the band. We sent her some videos performing some of the old songs and after many video calls and meetings, here we are! Any girl in the world would love to have the job, hehe. Nervosa is one of the most outstanding bands in the Thrash Metal scene nowadays and also one of the very few to be an all female band.’’

What makes you the right vocalist for Nervosa?
,,I’m sure that I’m not the best vocalist in the world, because there are amazing performers out there, but I guess that opening the Spanish shows for Nervosa last Summer with my band Bloodhunter, made that Prika could check how I usually work on tour.’’

Mia Wallace [bass] and Eleni Nota [drums] are also new in the band. What makes them the right fit in your opinion?
,,Mia has a more than well-known career in the Black Metal scene and worked with big names such as Abbath and Triumph Of Death. I guess she doesn’t need to introduce herself… [laughing]. Eleni is an amazing drummer, she does much more than anyone could ever imagine. Eleni has the perfect technique, she can play anything that you ask her to do and she has been working with a lot of interesting projects in many different music genres and that’s something very difficult to find. Besides that, they are both beautiful souls, which is very important, especially when you dedicate all your time to a project like this.’’

What does it take to be part of a band like Nervosa? And is Nervosa the centre of your life now or do you have another profession/day job as well?
,,I still have my day job because due to the current circumstances we can’t go on tour right now. Hopefully when things get better, I will dedicate my entire body and soul to Nervosa. When I did my audition Prika told me that she was looking for many other things in her new band mates, besides the technical skills. She wanted us to get involved in this project as much as possible, we needed to be available to travel, speak English and in my case a little bit of Portuguese because the biggest fan base of Nervosa is still from Brazil… And of course the personal connection between all of us would be something to work on, but happily it came natural to us and we feel as a family already now.’’ 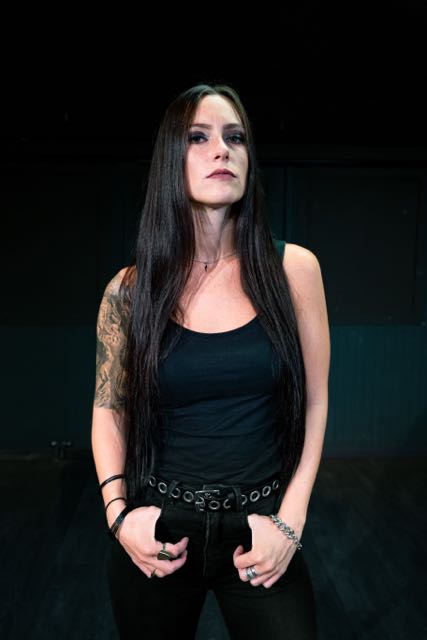 What has been your musical experience so far before joining Nervosa?
,,Everything started with my Death Metal band Bloodhunter 7 years ago. I learned everything that I know with that band; my very first experience in the studio, performing on stage, my very first time trying to growl… I am very thankful to my band mates for giving me the chance of accepting this new challenge in my career. Also I participated in the TV Show “The Voice” Spain [2017] as the first growler and I did many collaborations with such amazing bands and artists, like Holy Moses, Nightrage, Kamelot, Mägo de Oz and Leo Jiménez along the years. Five years ago I started giving Extreme Vocal Lessons for growlers (of any level) and I did some master classes for Music Schools. Besides that I also used to write reviews and interviews for the Spanish Magazine “La Heavy” (Mariskalrock.com) and recently I started to work for an Agency that provides services for artists. I think that’s all [smiling].’’

Why do you like to grunt and growl in a Thrash, Death Metal band in the first place and how do you make sure the listener understands the meaning of the lyrical statements?
,,At first I tried to be a melodic singer some years ago, but it was awful [laughing]. That’s why I decided to become an extreme metal singer. I tried to learn how to play guitar but I wasn’t very good at that. When the guitar player and founding member of Bloodhunter asked me to join his project, it looked like the perfect moment to me to learn how to growl. I can tell you that it’s not easy to pronounce perfectly in this register because of the growling technique itself. You need to use your mouth to articulate and to project the sound, which makes that you can’t say anything precisely. But I try as much as I can so people can understand me, even the chorus with simple phrases… I’ve been working on that for years.’’

What does the new upcoming album `Perpetual Chaos’ represent and stand for musically and lyrically?
,,`Perpetual Chaos’ is a very special album because we had to face many challenges to get to this point until the release. We had to write individually from home, in just 3 months and share some files via Internet. That was it. We didn’t meet each other until we got to the studio last summer. We had to travel in the middle of this COVID-19 situation and none of it was easy at all. Actually this album is our message to everybody who is struggling with very bad situations: NEVER GIVE UP!’’ 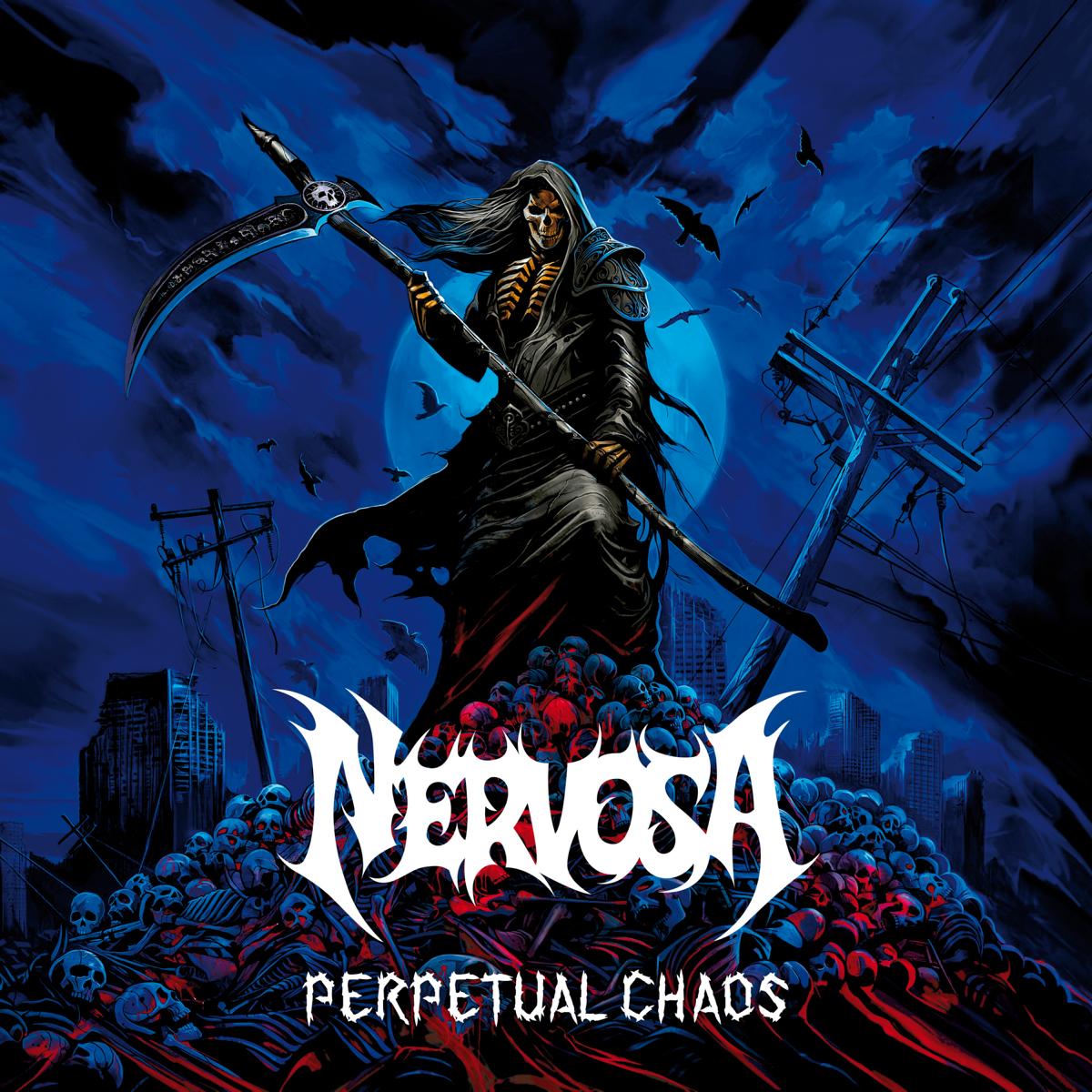 What are for you the most important lyrical statements on the album?
,,The album deals with human behaviour and how we created this chaos, looking at it from many different perspectives along the centuries. We talk about wars, capitalism, animal abuse… even this pandemic situation is very present because it has been a very big source of inspiration for everybody I guess.’’

Which songs do you specifically want to point out and why?
,,Any song on this album is important to us because they all deal with different topics of that one big chaos. Personally, because I work as a psychiatric nurse, the song ,,Until The Very End” is very important to me. It talks about suicide and it has an important message to all the people that are suffering, saying you’re not alone!’’

Did Nervosa take the opportunity to explore new directions and elements, with this new line up?
,,Sure! We all came from very different backgrounds and that’s an amazing thing because it allowed us to explore many different paths. It is something that hasn’t happened before in the history of the band. You can find obviously the essence of the old Nervosa because Prika is the founder member and the thrashy vibe will always be there, but now you can also hear some classic references to the old school style, Black Metal, Progressive, Punk… anything!’’

What is for you the magic of having vocalist Schmier (Destruction) by your side in the track ,,Genocidal Command’’?
,,Schmier is a legend! We are very thankful that he accepted this collaboration because he is supporting this new era, and that’s very important for us besides the music.’’

How do you recall working with producer Martin Furia [Sisters Of Suffocation, Evil Invaders] for `Perpetual Chaos’?
,,Martin Furia of course also worked as the producer of Nervosa’s previous album `Downfall Of Mankind’. He knows perfectly well how this band sounds. Martin is very professional and very easy going and he makes you feel very comfortable right from the beginning. For me that was the essential of working with him. He also helped me finding a vocal register that is closer to the former vocalist Fernanda, since we both have different vocal registers. We really wanted to find that approach to make sure the old fans would feel comfortable with it. Besides that Martin is an amazing lyricist and he helped us with the final arrangements of the album. He did a splendid job!’’ 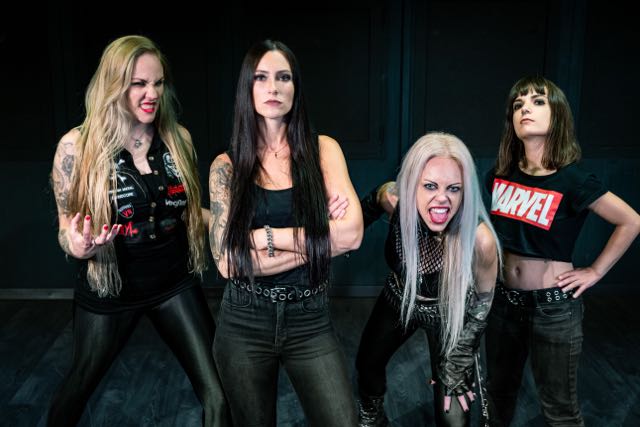 How are you going to celebrate the album release as a band?
,,We are very excited, so we probably will be chatting all day long or maybe we will do a video call to celebrate all together!’’

Is Nervosa already making plans for live shows and if not on stage, maybe online?
,,Yes! We have a lot of shows booked for next summer and there are also some tours that we had to re-schedule from last year. But, because we don’t know if it all will be possible, we are actually working on releasing new material, as the third and fourth part of the documentary of the recording sessions, another video clip and more play throughs! Stay tuned!’’
—
Foto Credit: Barbara Ciravegna