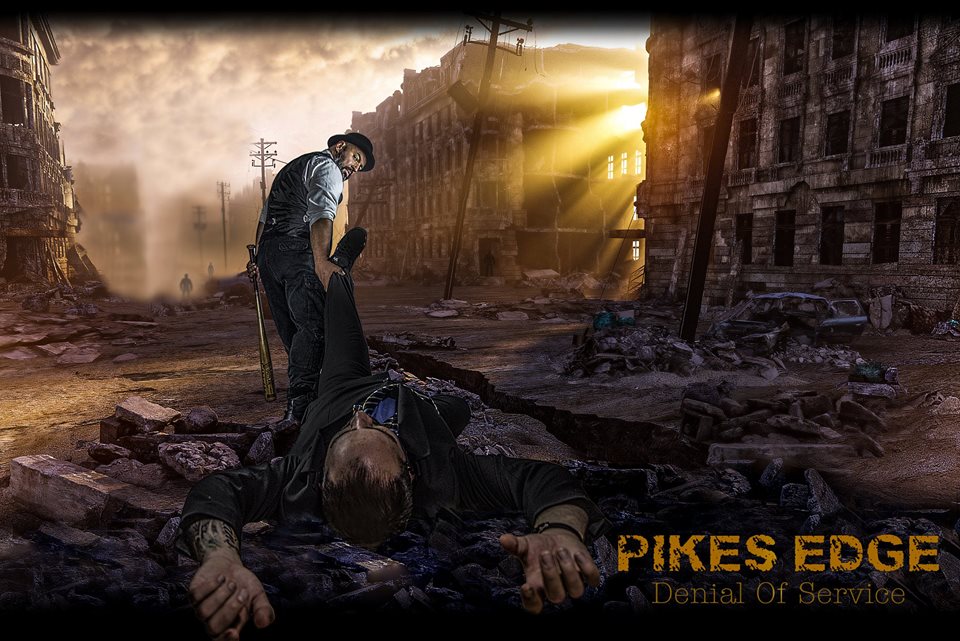 Although the Munich-based metal band Pikes Edge was formed somewhere in 2009, released its debut CD `Nameless’ in 2012 and hit the stage frequently with success during those years, the year 2013 became an important new starting point for the band. It was after the extensive European tour with German veterans U.D.O., frontman Pike felt the urge to head into a new and different musical direction and decided Pikes Edge needed a makeover. When new band members were on board the musical journey became a creative and fruitful collaboration and it resulted into `All Of Our Beauty’, their second new album that will be released on November 25th 2016. The new songs are fuelled with energy and attitude and please the ears with a great contrast between vocal aggression, heavy guitar riffs and beautiful melodic guitar melodies. HeadBangers LifeStyle spoke with singer Pike about his dedication, his vision and of course the new album. 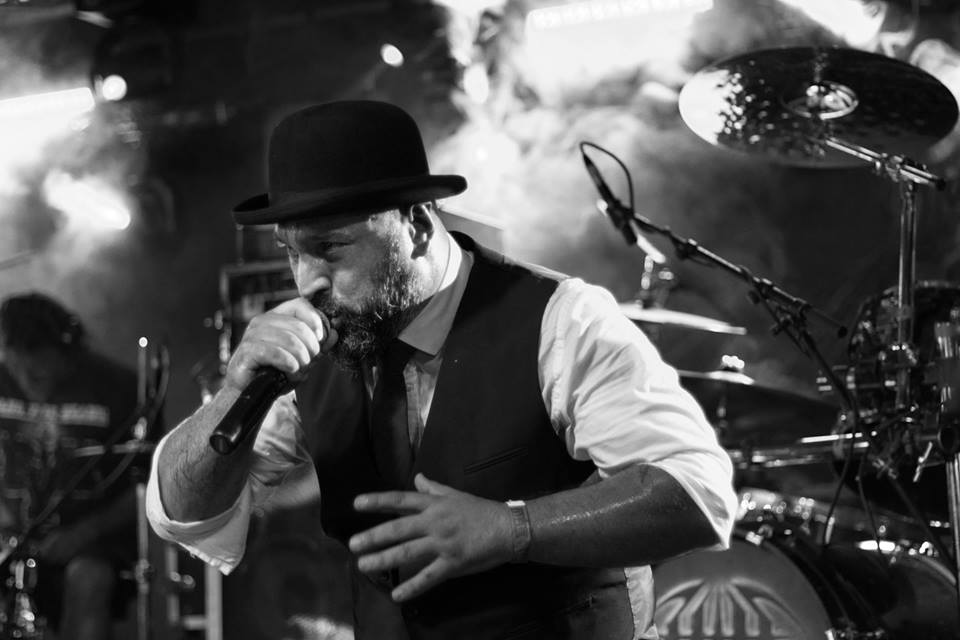 Pike, it seems you are a man with a mission. What were your ambitions when you started your musical career as a singer and what is the (musical) mission of your band Pikes Edge?
,,I started listening to metal very early, I think I was about 8 or 9 years old at the time. I don’t know the age exactly, but I know very exactly how much this kind of music captivated me. As I busied myself with the lyrics of my favourite bands, I was very impressed by their profound messages. For me, the lyrics also have become my most important means of expression.’’

Where would you like to see Pikes Edge in 5 years?
,,In five years I see Pikes Edge having two, or better three, more albums finished and having played many gigs at festivals and while on tour. My goal is to inspire as many people as possible with Pikes Edge.’’

What are you prepared to do and to sacrifice to reach your goals with Pikes Edge?
,,Those who know me know that I am crazy enough to give everything for the band, of course within the limits of morality. I don’t spare myself nor the people with whom I collaborate. On the other hand, I consider myself very lucky to have people around myself who give me this freedom and who support me in everything.’’

It seems the extensive European tour you did with U.D.O. in 2013, has had quite some effect on the musical future of Pikes Edge. What triggered you during this tour and why did you feel you wanted a complete musical makeover for Pikes Edge?
,,One never stops learning. It turned out that the people who accompanied me on that tour could not give me the most important thing and that was trust. I work very hard for the band, I demand a lot of course, but trust more than anything else. With hindsight, my decision proved to be right. Currently, I am not only surrounded by super cool musicians, but also good friends.’’

The brand new second cd `All Of Our Beauty’ is a result of the new musical journey. What musical style, type of songs and vibes are you offering the listener with this release?
,,The CD emerged from a cooperation with Lukas, our lead guitarist, and Fitty Wienhold, the bassist of U.D.O. For the listener it is a sound experience full of tension and energy, with classy solo parts by Lukas and the catching and varied rhythms that are so typical for Pikes Edge. For the vocals I brought all the variation I have. Many new ideas were adopted that raised Pikes Edge onto a new level, both technically and musically.’’

As a relative young artist, do you feel the need, to speak through your lyrics, to make statements about topics that you observe in todays society? (What are the lyrics about?)
,,Absolutely. As I mentioned before, the lyrics are a very important form of expression to me. We have packed a lot of our own perceptions of the world into the music and show it in Pikes Edge way. The songs are home to strange figures, views and perceptions who are subtly shifting. Ofcourse, love and tragedy are in there, too.’’

The album is produced by U.D.O. bass player Fitty Wienhold. What were his most important skills and influence to get the album to the finish line?
,,It was mainly his very deep experience in the music world which we were confronted with during the production of the album. He was demanding, he was pushing and he was motivating us to show our very best. We learned a lot from him and discovered new parts of ourselves. Fortunately we also had a whole lot of fun. Due to this mixture of hard work and exhilaration, our time together will stay unforgettable.’’ 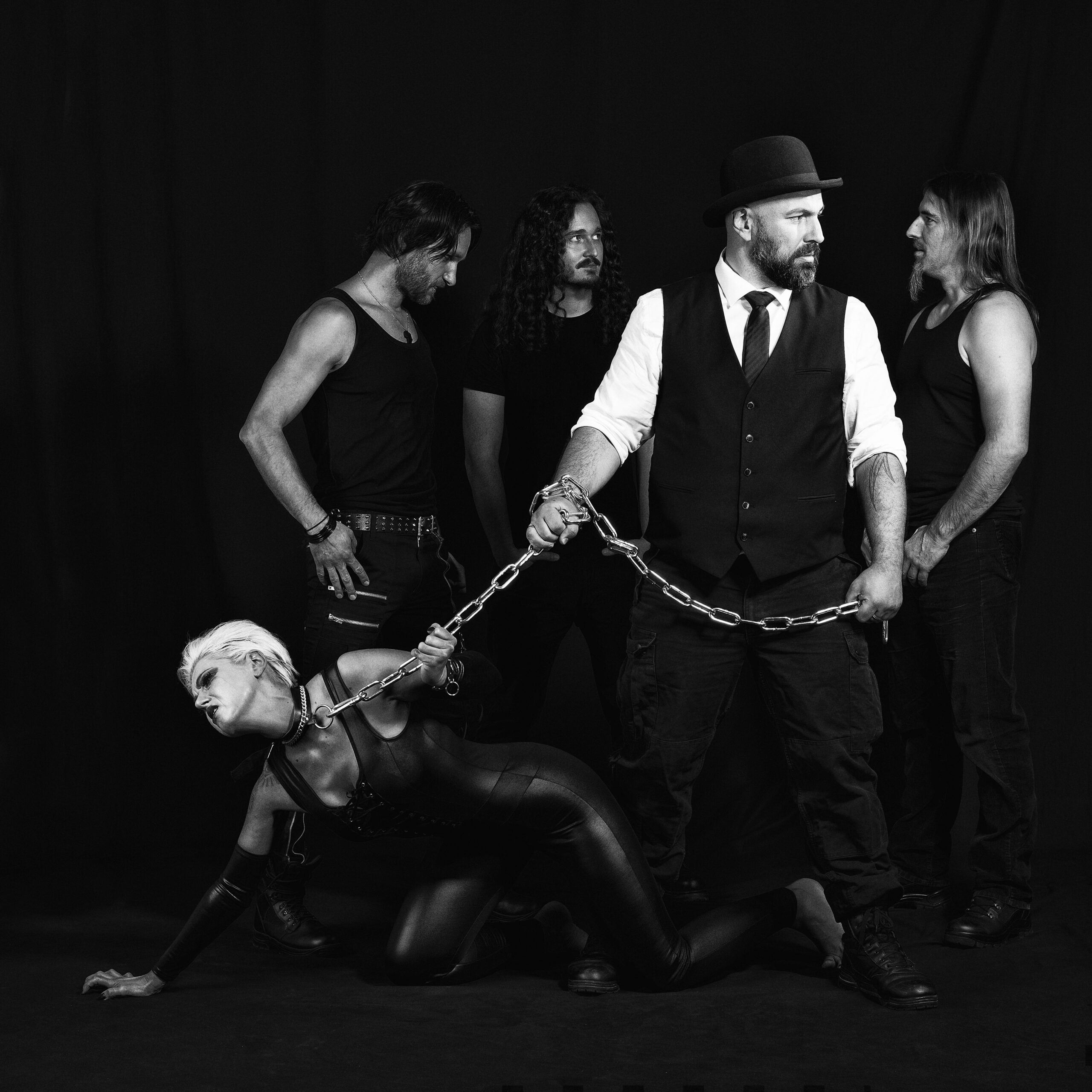 Your stage outfit is obviously different than the rest of the band. What is the idea behind that? And second, is image, visual aspects important for the band?
,,I gave many thoughts to the stage outfit. I wanted to have a main character for the topics of the album, a character who can carry their weight and who can be their appropriate storyteller. It was meant to be rebellious, strong and dominant. I think I hit the nail on the head.’’

What is the statement of the band photo where you hold a girl on a chain?
,,The picture is in line with the album, a statement about society. The recurring theme that links the songs is that a lot goes wrong. The question is what remains of values and human beauty. The photo alludes to the low regard that human dignity gets in a society that looks away.’’

What activities will keep the band busy for the next few months?
,,We will be very busy with promotional work and many gigs, also we have many ideas that have to be realized. And: The work on the next album has already started!’’
—
Follow Pikes Edge on Facebook and visit the Website