During the last 15 years, since the formation in 2003, German metal band Powerwolf claimed it’s fame in the worldwide heavy metal community and established a name for themselves. But it is not only their strong power metal anthems that made Powerwolf’s fan base growing with every release, also the theatrical appearance of the band members, the visuals of the live show and the tongue-in-cheek and irony in their werewolves and vampire tales and dark religion themed lyrics, are without a doubt an important key to Powerwolf’s success. With their latest release `Blessed & Possessed’ [2015] “the wolves” hit the German album charts for the first time and even made it into the top 3, which could be considered an important milestone in the band’s career. After touring like a maniac Powerwolf went into the studio in the beginning of this year to record the seventh album `The Sacrament Of Sin’, which will be released 20 July 2018. HeadBangers LifeStyle had a conversation with organ player Falk Maria Schlegel about the new release and what to expect in the near future. 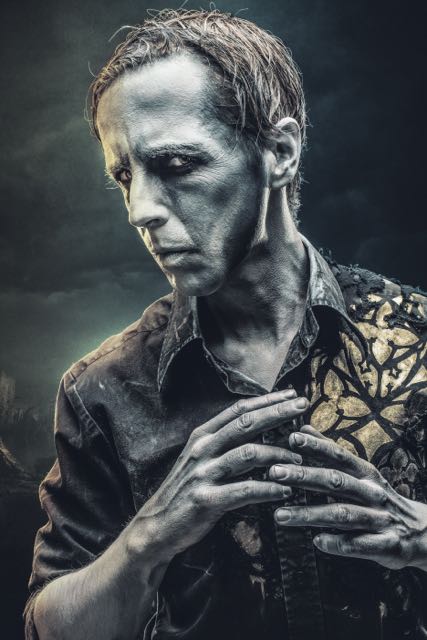 The main question is, what can fans expect from `The Sacrament Of Sin’? Is the sound different than it’s predecessors or aren’t there any surprises at all? Falk chuckles when I ask him and he believes the album is on one hand a typical Powerwolf album but on the other hand it has much more variety than the previous CD `Blessed & Possessed’. ,,It’s because we dared to use more elements, more orchestration parts and other instruments, for instance a bagpipe’’, he explains and continues: ,,For the orchestrations we worked with Dutch producer Joost van den Broek for the first time, you might know him from Ayreon and Epica. When it comes to the lyrics, we are all grown up with the catholic rituals and sacraments and it is still very interesting to us to write about religious themes but as you know we do it in our own way, with some irony and humour. So far it fits perfect for us, but it doesn’t mean we will have different topics in the future.’’

Also for the first time Powerwolf worked with producer Jens Bogren and Falk couldn’t be more excited about it: ,,He is a great producer from Sweden and we choose to work with him because we love his work for Amorphis, Amon Amarth, Kreator, Opeth and so on. Jens doesn’t use a standard sound; he can create a good sound that leads a band to its own character. That is what we wanted to have and Jens gave the album an excellent, organic sound.’’

,,We are not a symphonic metal band’’,- Falk Maria Schlegel

Falk looks back on the recording process, as a hell of a journey. ,,Honestly, we didn’t know where we would end but we always have a strong will and vision of what Powerwolf is. We talked a lot about production and sound and very important to us is that we are not a symphonic metal band. That means that sometimes we had to leave out orchestration parts because we want to feature the guitar or the voice of Attila. It was also very important that all elements we were using were relevant for a song, details that improved a song’’, he says. Falk also claims all band members improved themselves as musicians because of working with Jens. ,,He forced us to record our parts at once and not in different sections. It actually really felt like going back in time, the old days, and I guess that is why the album has more of a live feeling to it as well. But in the end the main goal was that we as a band are satisfied with the end result and that is what we achieved. I think we wrote really heavy and catchy songs and even a ballad for the first time. I am super happy with the result and I would say this is our best album so far.’’ 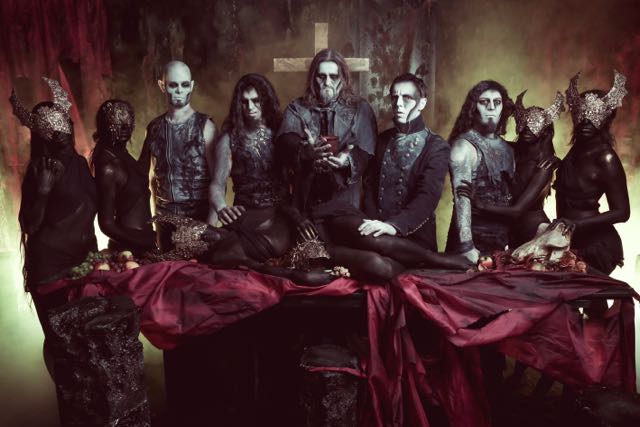 A ballad on a Powerwolf album? ….. That is a very unexpected fact, to say the least, because all those years “the wolves’’ never slowed down, never got really sentimental or soft. Falk almost can’t believe it himself either and says that writing and recording the ballad ,,Where The Wild Wolves Have Gone’’ the band overcame a certain fear.
,,I have to tell you, when we are backstage having an after party we really like to listen to the huge ballads of for instance Guns ‘N Roses and Scorpions. You know, all these super catchy songs. But we didn’t allow ourselves to make songs like that, we simply didn’t dare to do a ballad. And so far we always thought our songs should be more heavy and more aggressive, until Matthew came up with the chorus of ,,Where The Wild Wolves Have Gone’’. When we heard it for the first time, we were blown away and we strongly felt it was time to do it. I mean, this is our seventh album, come on we can do it! We rehearsed that chorus for a while but made the decision to finish the song very late in the production phase. It is a more serious song that lyrically is dealing with life after death, a place, some sort of hereafter, where friends and loved ones reunite. So we finally got the self-confidence to actually do it. I am super happy with this song, it is one of my favourite songs of the album and I am quite sure we can play it live because it has these dramatic and sub drama elements we like to present on stage.’’

,,It shows me that there is a real heavy metal family’’, Falk Maria Schlegel

When it came to deciding what the first video single should be Falk tells that the decision was unanimous: ,,We made several videos for this album but we really fell in love with ,,Demons Are A Girls Best Friend’’ and decided to release it as the first video single, also because we wanted to surprise the fans. It was one of the first songs we wrote for this record and everyone in the band could really imagine performing this song. It is more of a hard rock song, it has a rock approach theme and you can sing along with it and we go back to our roots a little bit. The song is about the eternal story of innocence and seduction, always a great topic for Powerwolf with some typical Powerwolf irony in it. [laughing] `The Sacrament Of Sin’ will be released, besides the regular jewel case, in different limited formats. For instance `The Priest’ edition, which unfortunately is already sold out, offers a metal cross, a 3 CD ear book, a maniple [a priest scarf] and a lot of weight. ,,The maniple is my trademark on stage and it would be cool if fans wear it too during our shows’’, Falk comments. Then there is a The Deluxe hard cover box that has the bonus CD `Communio Lupatum’ like `The Priest edition, but also a cover flag, bonus LP’s and signed photo cards. The Limited Premium 2 Media Book Edition is the most sober one and only offers the bonus CD `Communio Lupatum’, with 10 Powerwolf songs performed by other artists. ,,The idea for this cover album actually came up while we were on tour with Epica, because they played our song ,,Sacred & Wild’’ during their soundcheck’’, Falk recalls. ,,All the bands you hear on this bonus CD are friends of Powerwolf. That means we have toured together, we had great backstage experiences together and it is amazing to have that! It was a big project, almost like making a new album because every band has its own schedule, tour plans and other activities. Epica, Caliban, Amaranthe, Kissin’ Dynamite, Battle Beast, Heaven Shall Burn, Eluveiti, Saltatio Mortis, Kadavar and Mille Petrozza of Kreator, they all have done it in their very own style and I am really proud of that. It shows me that this crossover in heavy metal is possible and it shows me that there is a real heavy metal family and I am really happy to have it.’’

The pack of these 5 wolves have been growing with a lot of loyal fans and a true milestone of course is that the last album `Blessed & Possessed’ ended up in the German album charts and made it into the top 3. I wonder what impact this had on the band or couldn’t they care less? Falk reacts pretty down-to-earth: ,,When we started with Powerwolf we, of course, dreamt of more success, bigger stages and the amount of people that like our music. But to be honest we really never thought that we could reach the level of success we have now and we are so thankful for that. When we hit the German album charts we were super happy of course, but in the end it is just a number. The truth is, when I go on stage again after a new CD release and I see people singing the new songs just like they do with the older ones, than I am really happy. That is the moment I know, that proves to me, that they like the new songs.’’ 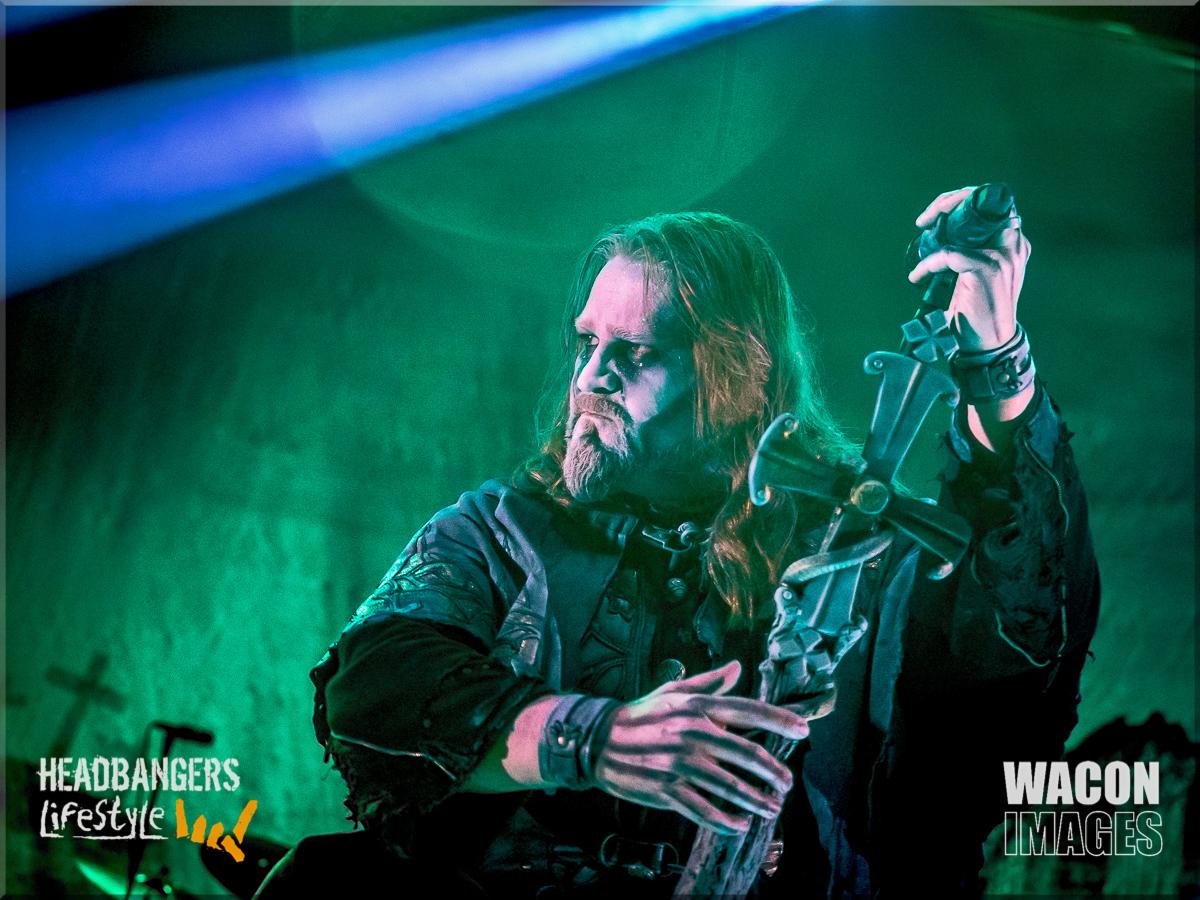 A new album, also means going on the road and Powerwolf will start of with playing Summer Festivals, like Download Festival, Graspop Metal Meeting, Rock Harz Festival and Bang Your Head Festival. Playing at a festival mostly means playing a greatest hits set list but Falk ensures that the fans will hear new material. ,,Normally we didn’t do this in the past but I think the fans deserve new material and if you headline on such great festivals we have to play new songs and bring the new stage set up with us. We really want to deliver the atmosphere of the `Sacrament Of Sin’ artwork to the stage. You will probably see it on YouTube really soon because everybody is filming with their smartphones these days. Unfortunately the quality of the sound and the light is often not so good and when people hear a new song in that way for the first time they can get the wrong impression. So I am not very happy with that, but hey we are living in a time with all these mobile devices, you can’t change that so it is what it is. That is also why we make more professional videos these days because we are a visual band, we want to deliver all these visual elements.’’

After the festival tour, Powerwolf will continue as a headliner with `The Wolfsnachte Tour 2018’ which starts 26t October in Wiesbaden up till 17th November Saarbrucken, bringing Amaranthe and Kissin’ Dynamite with them. I want to know what “the wolves’’ are up to with this tour. ,,It will be the night of the wolf, a family evening for fans, and all the bands involved. We like to have this 3 band package instead of having support acts with us, because now every band has more time to play an to present its stage set up. And the main goal is to have a great time all together. Amaranthe and Kissin’ Dynamite are two completely different bands than Powerwolf but it will be interesting to see the variety of fans in front of the stage. Maybe we can end all together on stage to play a Powerwolf song. Actually we are planning to do a lot or touring for the new album the next couple of years and hopefully we can go to countries we haven’t been so far so our fans over there get the chance to see Powerwolf live. It means we will have a lot of good times the next years because we are addicted to playing live.’’
—
Follow Powerwolf on Facebook and visit the Website here