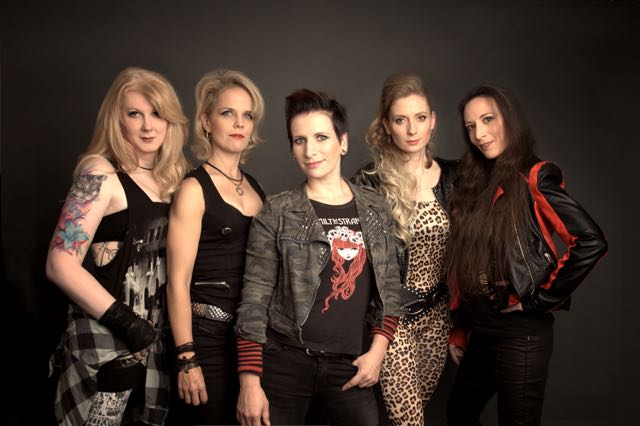 When I was hosting the 2017 edition of Female Metal Event FEMME on Saturday, I saw great bands playing there, but one of the bands that really stood out for me was REVOLUTION EVE, hailing from Germany. Not only because these five ladies were incredibly kind and fun off stage, these musicians totally rock on stage! A live performance of REVOLUTION EVE shows a lot of energy, positive vibes, diversity, groove, rock ‘n roll and fun, besides the fact their set list is filled with infectious cool songs. REVOLUTION EVE was formed mid 2012 and since then Diana Nagel [vocals], Simone Wenzel [guitar], Maria Kimberly Huehn [guitar], Nikke Blout [drums] and Conny Marschall [bass] rock the stage as much as they can. Their discography contains the 5-track EP `Arise’ [2012] and the full length CD `Pandora’ [2016], but new songs are in the making. After Female Metal Event FEMME I felt determined to introduce the HeadBangers LifeStyle readers to this talented band, so I dropped a few questions to guitarist Maria Kimberly Huehn, who also happened to be one of the founders and main songwriters.

,,Building bridges is so much cooler than burning them.’’-Maria Kimberly Huehn 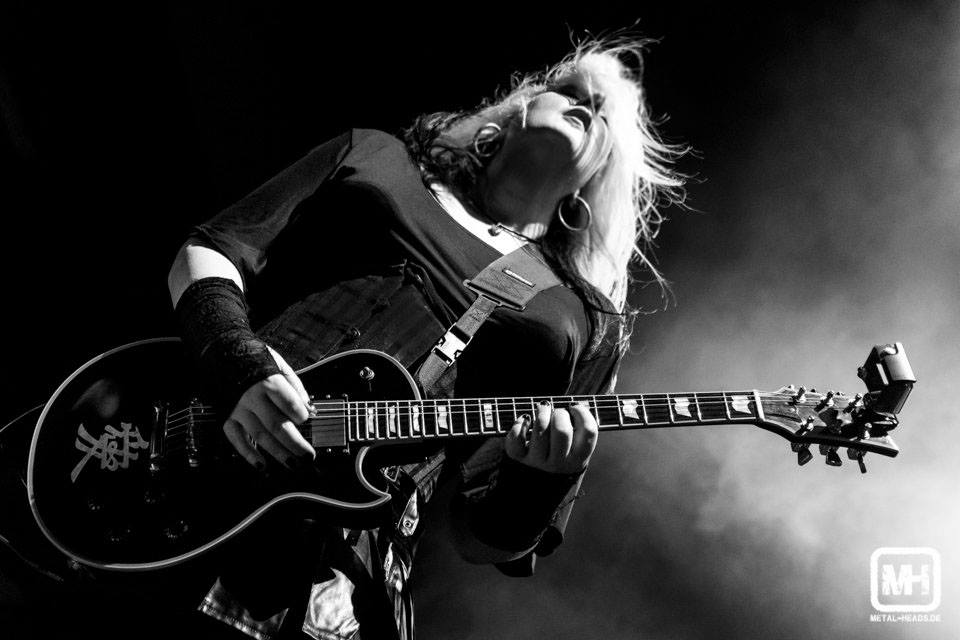 What rocks and moves this band?
,,Every band, every songwriter, primarily has this key driver: That is to create, write and play music. The genre isn’t as important as the will to express, entertain or get some message through. It can even be kind of a therapy. When you choose to go at it as a band, a common approach often seen is that one or two persons take the “lead” and the rest of the band follows along. Indeed, we are a band, but as REVOLUTION EVE we really make an effort to be a more “holistic” or “democratic” band. Meaning, even though we are all very different characters with very different ways, we don´t try to side line one or the other. Instead, our aim is to take in the various aspects of each of our lives and always create something new out of the collective dynamic. It definitely means, however, not taking the easy route as it involves much talking, going into deeper discussions, listening, understanding, changing, adapting and so on. However, in the end, you can be sure that what you hear, see and feel is the product of a truly collective “band”. I would dare to say that it’s not really something you see often these days. But I guess for us, that’s what has more meaning, and what it´s all about – building bridges is so much cooler than burning them.’’

Was REVOLUTION EVE meant to be an all-female band in the first place or is it just the way it happened?
,,When Simone and me started out, we were very open to finding band mates – male or female. Nevertheless, I was convinced that a female voice would best fit the songs I was writing. Like a medium “channelling” the sensations I envisioned. The rest was pure coincidence.’’

Why do people need to go to a REVOLUTION EVE live show?
,,Pure connection! In our live shows we want to give people a good rush, a surge of power and a place to “break free” – meaning letting go and authentically experiencing a connection with themselves and together. After all, we’re there as a group of individuals, who work hard to stay true to ourselves and to each other. So, whether it’s on the big stage in front of thousands, or on a smaller one with local fans and folks, we are there as people who genuinely love what we do – creating music that is woven together as individually as every member is. There is never a “we have to do this” or “we should be more like that.” We’re less about impressing with over-eccentric clothing or “costumes” and being a theatre act. And I’m not saying that isn’t an ingredient for great entertainment. I’m just saying it’s less about building a mystery and more about wanting to genuinely share our thoughts and expressions as directly and authentically as possible. We want everyone to relate and feel like they’re a part of it all. It’s like, when you add in the entire audience, we become this great huge band.’’

,,We have fans ranging from 16 years old to 60 and older.’’- Maria Kimberly Huehn 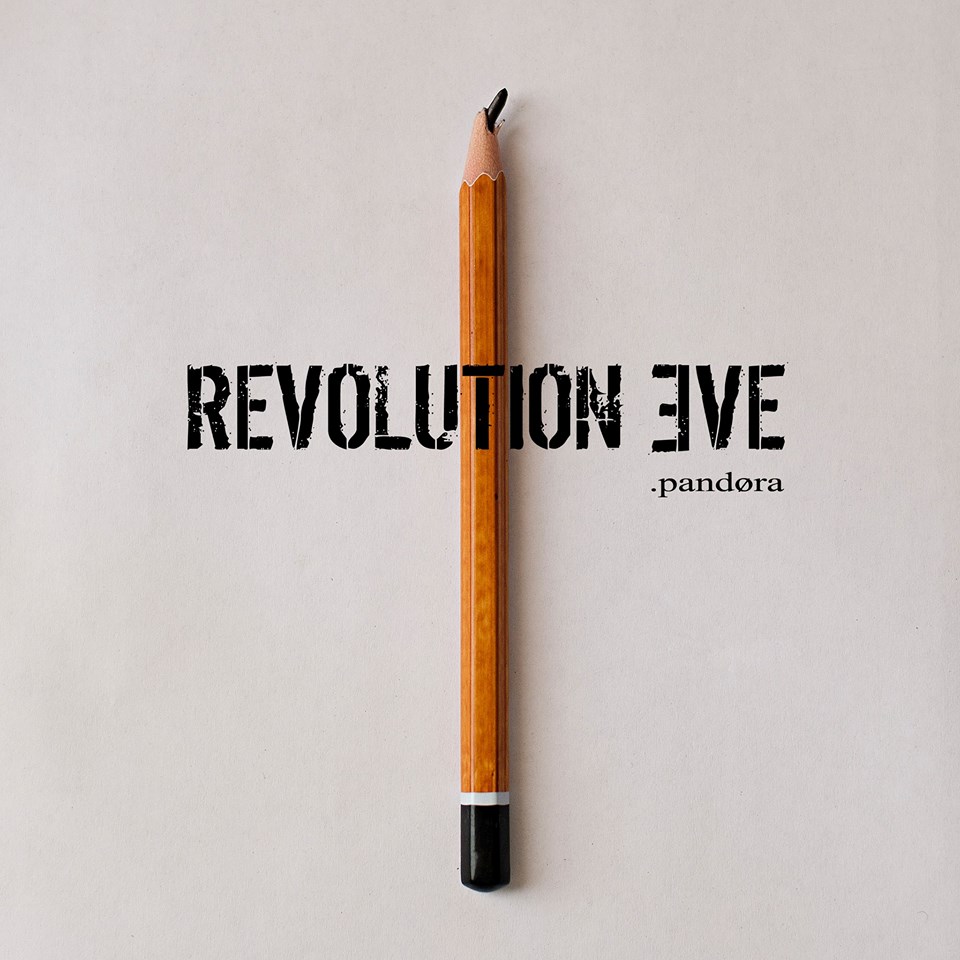 What defines a REVOLUTION EVE song?
,,A song always has two parts to it: The “musical arrangement” and the “lyrics”. For us, you cannot separate one from the other. Confused rhythms might work well for songs about a confusing state of mind, but not for lyrics about the times of peace and calm. That is very important to us. The “feeling” of the song as a whole should be transported, not some “fancy new scales” that someone just discovered. The art is more the song itself and not the pure display of musicianship.’’

In what section of a record store would you place your latest studio album `Pandora’? And who is your audience?
,,Wait! There are still record stores?!? Please, show me the way [smile]. Well, it would definitely be in the “Rock” section, if not then in the “Hard/Heavy” section, or could be in the “Punk” or even “Pop” influenced section. Therefore, in the “Alternative” section seems like where it would best fit.
Who is our audience? Our audience is totally diverse. It’s crazy – we have fans ranging from 16 years old to 60 and older. But I guess what unites them is that they all appreciate “listening” to music with soul, to music that allows them to feel “emotion” and is a vehicle, which can transport them “on their way” in life.’’

Has the ambition of the band changed over time since the start back in 2012?
,,When you start a band, people often tell us, we should talk about our “goals.” But does that really make sense? Goals might never be reached, or they might change over time. Therefore, we take it “step by step” and along the way we are checking if everybody is still “on board.” After five years, that seems to be working pretty well for us.’’

,,Our purpose is to have fun and play the music we love.’’- Maria Kimberly Huehn 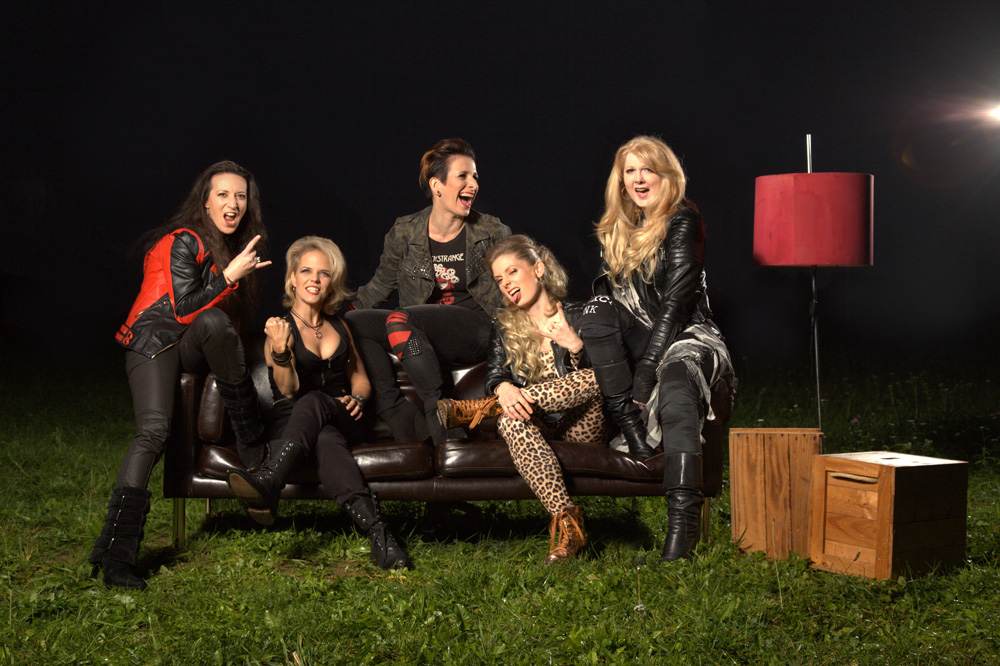 How far will you all go for success? And where would you draw the line?
,,That is a question that can only be answered separately by each member. And even then, the answer might change over time. It’s important to live out your dreams, but it’s also important to live your life in the time, in which you are “on your way”. I think the saying is, “it’s the journey and not the destination.” For us, our purpose is to have fun and play the music we love, for those who can love it too. That in itself is the greatest success you can have. It also means being independent from outside influences.’’

What are the good habits of the band?
,,Trust is a big thing. We trust each other. And nothing is done “behind someone’s back.” We listen and help each other. We also work to keep democracy real in the band.’’

What marks the agenda of REVOLUTION EVE in the upcoming months?
,,As we approach our last gig of 2017 in December, we just found out that there will be not much time to rest with the next gig already starting in January. We are also looking forward to expanding beyond the borders of Germany starting directly with The Netherlands, where we already had some amazing gigs in 2017, not to mention having new Dutch friends and fans create a Dutch Facebook fan page. And, in addition to the on-going booking of gigs in 2018, we’re ready to start working on our next album. So, stay tuned, and looking forward seeing you out there! Thank you for all that you do!’’
—
Follow REVOLUTION EVE on Facebook and visit the website here