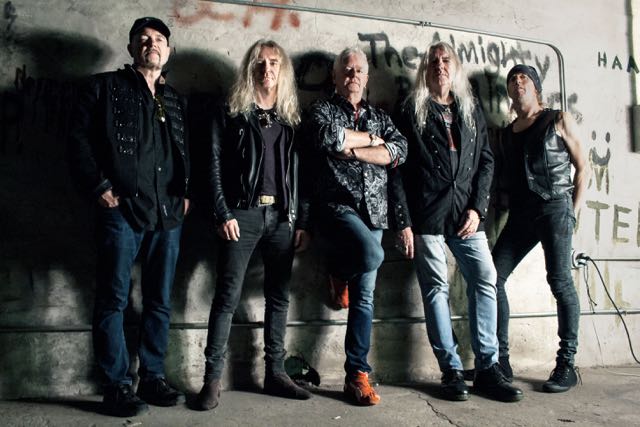 The Year Of The Thunderbolt

One of the greatest pioneers of the New Wave Of British Heavy Metal and still going strong is without a doubt Saxon. Being in the business for more than 40 years, lead by the always fabulous singing Biff Byford, Saxon seem unstoppable and not aiming for retirement any time soon. Saxon’s discography is still expanding with new, good releases and these gentlemen are also frequently on the road to serve their fans a rock solid show. 2018 will be a busy year for sure for Saxon; on February 2nd their brand new 22nd studio album `Thunderbolt’ will be released, followed by massive touring until the end of the year. Singer Biff Byford is definitely looking forward to it, so he says when HeadBangers LifeStyle talks with him for a short update.

,,Making an album is a bit like writing a book. I don’t think it is ever finished.’’-Biff Byford 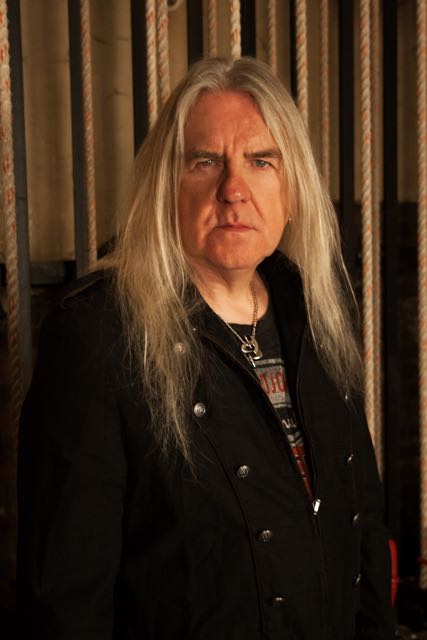 After having the privilege to listen to the promo of `Thunderbolt’, I conclude that Saxon made a great, thunderous and energetic heavy metal album in their typical traditional style, yet with a vital and up to date approach and sound. But what makes the album charismatic for the metal fan according to Biff himself?
,,Well, I think `Thunderbolt’ is a great collection of tracks with great subjects and great guitars. But it is not up to what I think because I’m always going to say it is fantastic. It is up to what people think about this album. That’s what matters.’’

Having already written and record so many albums, the question is how Biff experienced making `Thunderbolt’?
,,It was good fun. Yeah it was really good. Andy Sneap produced it. I let him do everything, so this time I was not involved in the production like with the last CD `Battering Ram’. Why? Because I just wanted Andy to do it so I could concentrate on writing lyrics and doing the vocals and generally organizing different things, really. I had great fun writing lyrics, they are quit complex and difficult some of them.’’

When writing and recording an album the artist is in a creative bubble for a while, driven by adrenaline to built and finish songs, while isolated from the rest of the world. When an album is done and processed, reality checks in and suddenly there is no control over what will happen next. Biff doesn’t seem to have a problem with that.
,,Actually I feel always happy when an album is finished. Making an album is a bit like writing a book. I don’t think it is ever finished. But you have to draw a line and say okay it is finished now. But there is always something you could probably do better, that’s the problem. So yeah, I am always happy when we finish an album. Well, we can’t take it back if that’s what you mean [laughing]. But it is part of the business, you have to give the album to the record company and to journalists and let them listen to it and hope that nobody puts it on the Internet. Now we have to wait and see what people think of what we do, that is what bands do you know.’’

,,I’m a big fan of Amon Amarth, I like their Viking metal.’’-Biff Byford 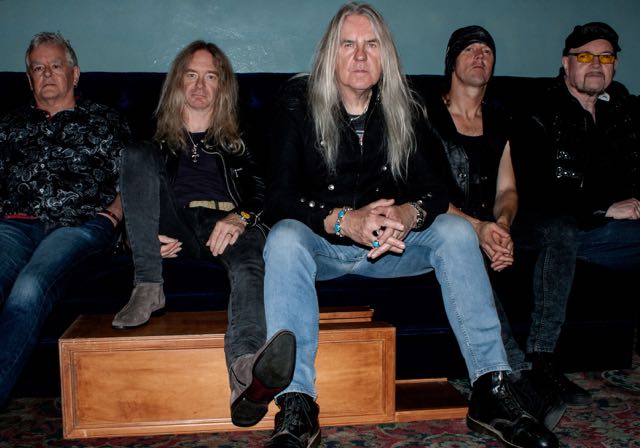 Although Biff looks and sounds very vital, he is not getting any younger. I wonder if he made this album as if it is the last one?
,,All our albums have been the last one. Even our second album was our last one [laughing]. The thing the Englishman does is: Expect the worst but hope for the best. That’s the thing, it’s like believe in yourself but don’t fool yourself. We have been doing this for a long time now and we had a lot of ups and downs. We are making albums now that we feel are great albums and the story behind that, that’s what we believe.’’

It is obvious that Saxon is still hungry for writing new tunes, which is simply explained by Biff.
,,Me and Nibbs [Carter, bass player] do a lot of writing together and we have a lot of ideas all the time. But they are not all good ideas, though [laughing]. Some of them are okay, some are great and some are fantastic and some of them are “scheisse’’ [laughing]. It is just how it goes. It is a process of writing, coming up with great melodies and lyrics and then the arranging. Yeah it is quite a complex thing writing songs, you know. I like to work with Nibbs quite closely in the original ideas of the songs. Nibbs and me are very motivated people and we take the ideas to the band later on to play them together. Not all the songs but I think 75 per cent of the songs are done that way with Nibbs and me. Yeah, it was great fun. We don’t have much time to write when we are on the road to tell you the truth. We do meet and greet with fans, interviews and of course the gig. We like to relax before and after the show a bit as well. But I guess the song ,,Roadie’s Song’’ was inspired by being on the road.’’

A song that stands out for instance is ,,Predator’’, in which Johan Hegg, singer of Amon Amorth, is duelling with Biff. A striking choice and Biff couldn’t be more excited about it.
,,We met the guys from Amon Amarth when they first started. We played at a festival in Italy together. We know them quite some time now and I’m a big fan of Amon Amarth, I like their Viking metal. Johan is a big Saxon fan as well so it was a natural thing for me to work together with Johan. He was my first choice actually to sing that song with me. I asked him to do it and he liked the song, it worked out great. He definitely got the flavour. I think it is a great song; it’s got a great groove. On the demo I did the low voice myself actually, its not hard to do that if your voice is in good condition. How I keep mine in condition? No idea. It is just in a good condition at the moment.’’

,,I just keep a very positive outlook on things.’’-Biff Byford 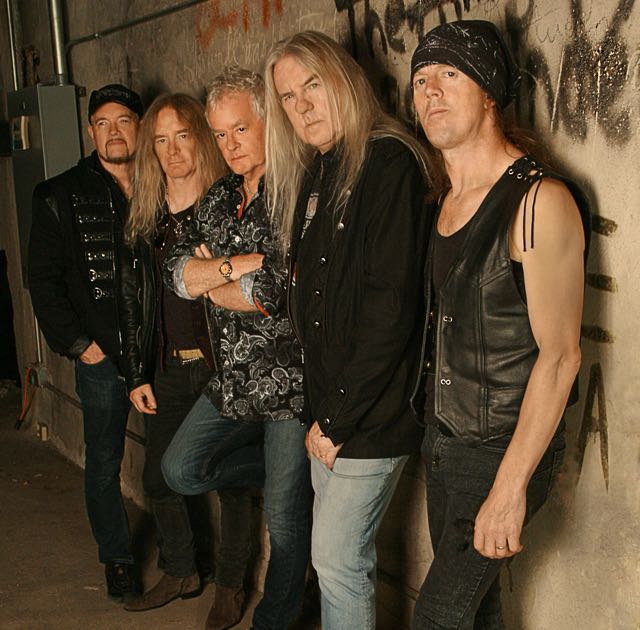 Another song that stands out on `Thunderbolt’ is ,,They Played Rock And Roll’’, a well deserved homage to Mr. Rock ‘n Roll himself, Lemmy Kilmister. According to Biff it is a song Saxon had to do.
,,It is a song about Motörhead and about Lemmy and about how we met, really. The very first tour we ever did together was in 1979, the `Bomber Tour’, and at that time Motörhead were very, very big already. We knew all the Motörheads. We knew the first Motörhead, we knew the Motörhead with Brian Robertson, the former guitarist of Thin Lizzy, and we knew the Würzel and Phil Campbell Motörhead. We have toured with all the different Motörhead line-ups and we were very close to Motörhead, especially the first Motörhead. I think writing a song about Motörhead, from Saxon, is something we had to do. Yeah, I think they deserve a great song and I wanted it to sound like Motörhead. I wanted that song to sound like we wrote it in 1979 and keep the sound like that. To be honest I don’t know if this song will be on the set list of our upcoming tour, that is up to the fans, because we play what they want. That is what Saxon do. We don’t try to ram songs down to people’s throat that they don’t like [laughing]. We like to play the songs that people like. We probably ask people in February which are their favourite songs and we put the set list together the night before we play. That’s how we work, very spontaneous.’’

Life isn’t endless, not even to our Metal Gods. When losing fellow musicians along the ride of rock ‘n roll, does it make Biff think about his own mortality?
,,Not particularly, no. I don’t. I just keep a very positive outlook on things and see what happens.’’

The old school metal bands Diamond Head and Rock Goddess will join Saxon on the first leg of the `Thunderbolt Tour’, which seems to be a very good package. Did Biff and his band members have any saying in this deal?
,,It was a choice of both Saxon and our management. Diamond Head is a great band. They have some great tracks. Rock Goddess again, great band as well but I think Rock Goddess will join us only in the UK, while Diamond Head will support us during all the European shows. I think this is a good old school package. And of course we like to meet as many people on the road as possible, because we are a people band. We don’t have tons of security around us. We are pretty open to people talking to us.’’

For now it seems Saxon has no intention to stop any time soon. But when the time comes and Saxon pull out the plug, how would Biff like to be remembered as a band?
,,Remember the music and remember that we were a great live band. That’s what everybody should remember. We are pretty proud of the fact we’re still here and that we have influenced a lot of other bands. That’s good. But for now 2018 is going to be the Saxon `Thunderbolt’ year because we will be on the road a lot. `The year of the Thunderbolt’, how does that sound?’’
—
Follow Saxon on Facebook and visit the Website here