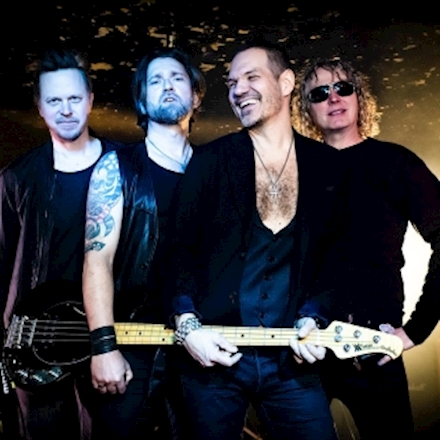 Going Back To Their Roots

They took their time but now they are back with ‘The Show Must Go On’, an album that is described on HeadBangers LifeStyle as `A MONSTER melodic hard rock album’. Reason for Ron Willemsen to contact Skintrade singer Matti Alfonzetti to talk about the album, how they deal with these unprecedented times and future plans. 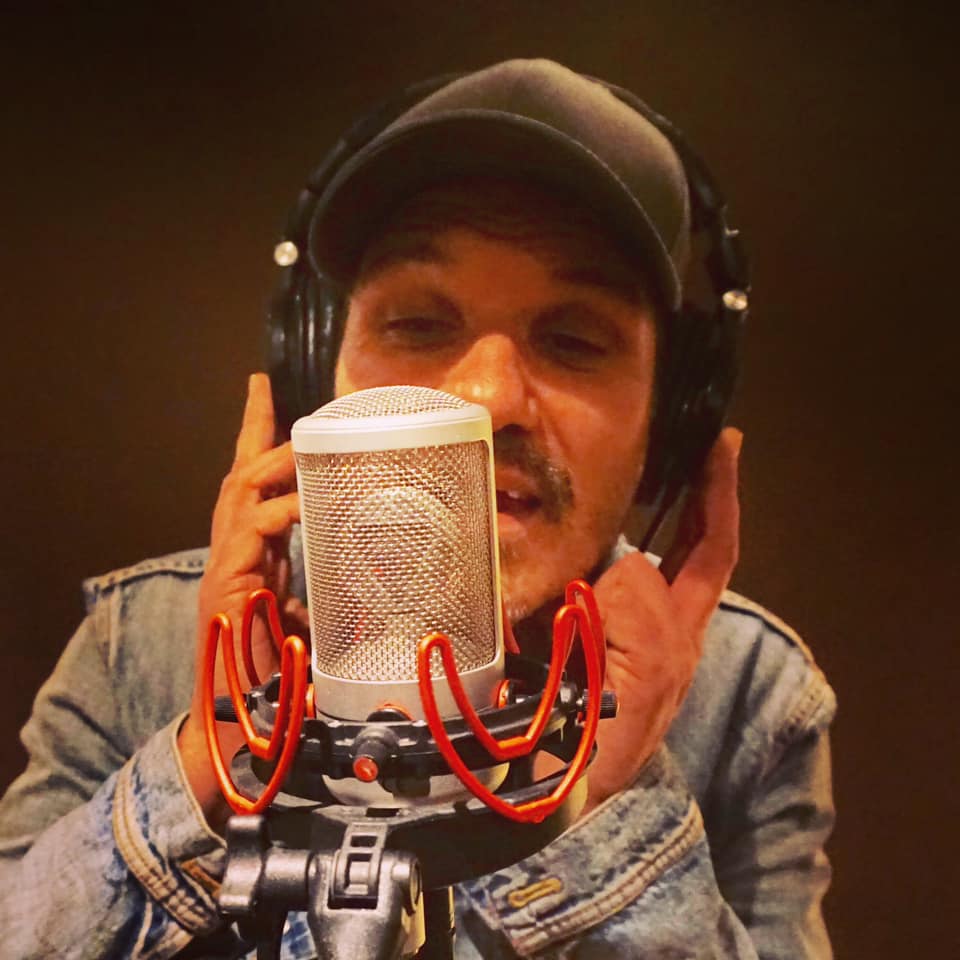 Matti, it is 5 years since the release of ‘Scarred For Life’. When did you decide it was time for a new Skintrade album?
,,I started writing for this album summer 2018 so it took us a while to finish it.’’

Was it easy to convince the others?
,,They were all pretty excited about it as I had a slightly different approach to my writing this time around.’’


When you started working on this new album, did you start from scratch or did you go through your archives?
,,Totally from scratch. As I said, I wanted a different sound and started writing songs on an old piano sitting in my living room. Usually I write on the guitar for Skintrade but I had some ideas that were more mellow and the piano felt right.’’

What was the goal when you started working on the new material?

,,I was trying to get back to my roots, my early inspirations you know, Led Zep, Purple, Hendrix, that kind of vibe. More organic, bluesy soul rock.’’

How do Skintrade songs come about? What can you tell me about the writing process?

,,I do most of the writing (Stefan [Bergström, guitar] comes up with good stuff too) and I demo the songs real quick. Then we meet up and sort of jam through the songs and everybody chips in with their take on it and that’s when the magic happens, it develops into Skintrade.’’ 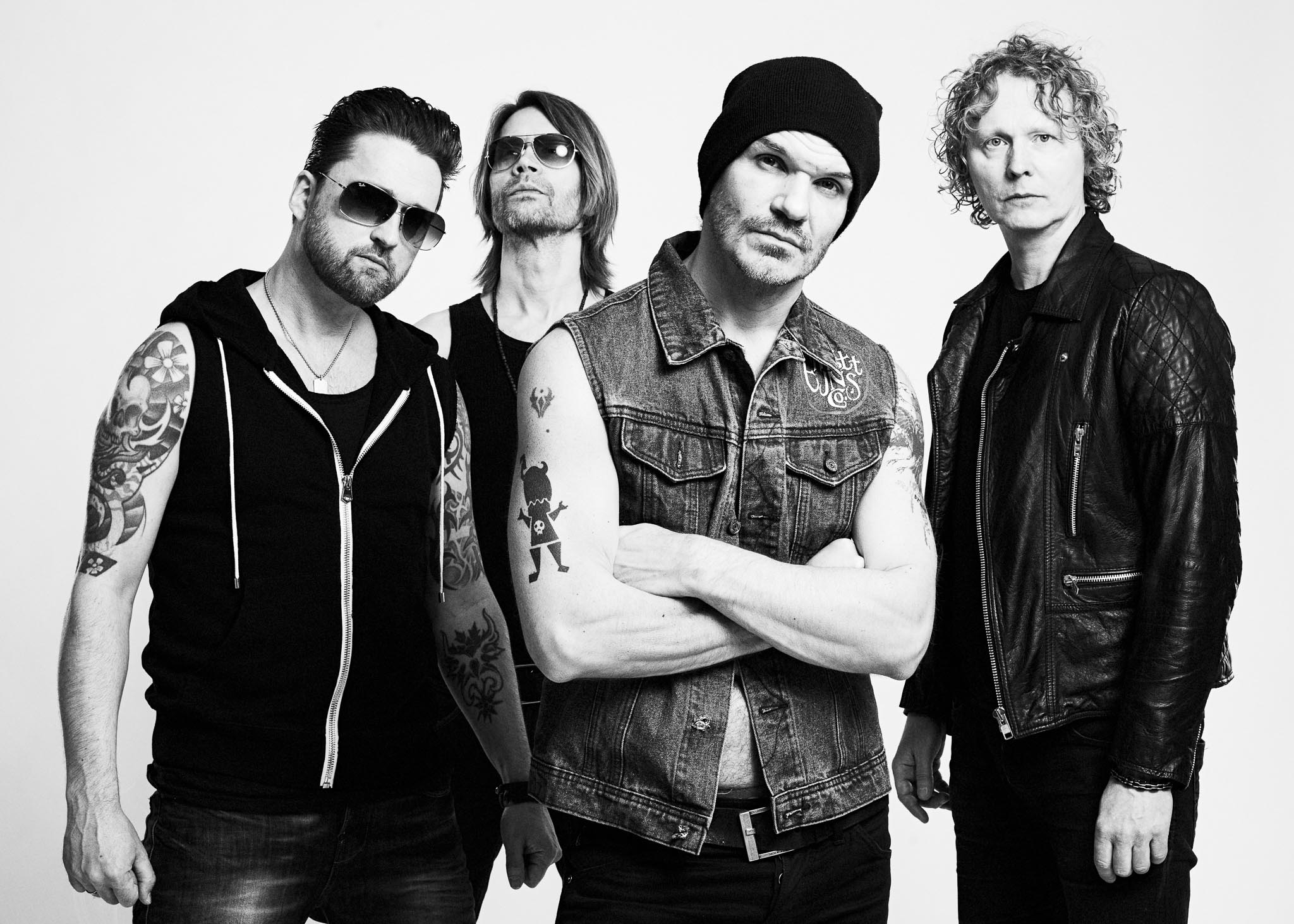 Your 5th album ‘The Show Must Go On’ contains only eight songs and lasts less than 30 minutes. A concious choice?

,,Absolutely. We felt that these songs were the ones that showed off the sound and songs we are about right now. I don’t see the point in fillers.’’

How would you describe the sound and style of Skintrade nowadays and how has it changed compared to the early days?

,,I think we made a journey from 90s sort of hard rock /grunge/crossover and all the way back to a more mature sound with our influences shining through clearly. ’The Show Must Go On’ is our first album with hammond organ and electric pianos for instance.’’

What are the criteria for a good Skintrade song?

,,Melody, melody and melody. If the song is there it´s just a matter of dressing it right, if you know what I mean? Then again production is always important but doesn’t do anything if you don’t have the songs.’’

Where do you get your lyrical inspiration?

,,I struggle with that question every time I get it….It depends so much on my mood, the mood of the songs and what kind of day I’m having. I go from really dark to happy like a fucking rollercoaster sometimes!’’

You released the debut album ‘Skintrade’ in 1993, followed by ‘Roach Powder’ in 1995. A lot has happened since then. Disbanded, returned in 2011 and again released 2 albums.’Refueled’ (2014) and ‘Scarred For Life’ (2015). Looking back, although releasing great albums it seems Skintrade hasn’t been that lucky. How do you see it?

,,I think if we had stuck with it after ’95 and kept on writing and playing it would have been a different story. But no use crying over that now. I´m proud to say we are a great rockband and that we’ve only just begun.’’ 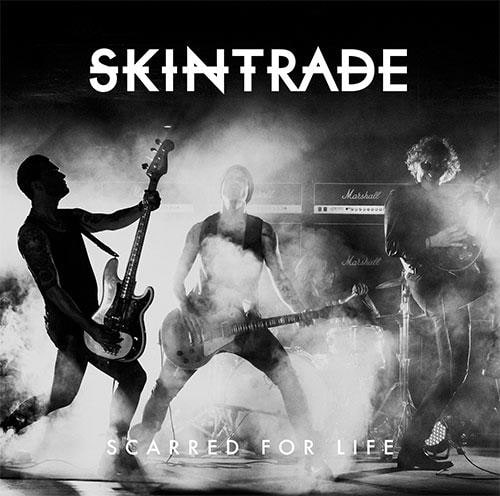 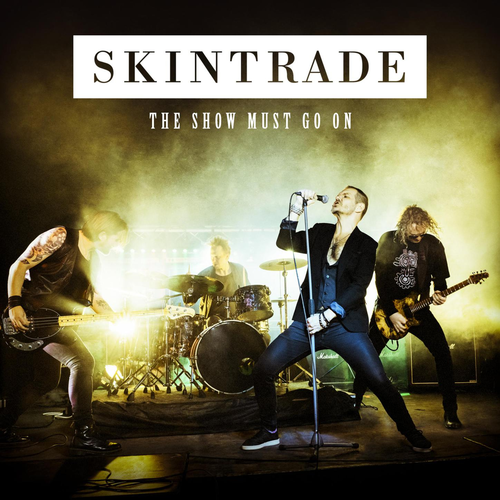 The album covers of ‘Scarred For Life’ and ‘The Show Must Go On’ have a similar atmosphere, both live shots of the band. Is there an idea behind that?

,,Not really, we just love that vibe of live shots. It is, after all, what we love to do.’’

What do you consider the biggest achievement of Skintrade?

Did you always wanted to become a musician more specific a singer?

,,I started out playing the bass back in high school as a laugh and I discovered I had some musicality in me. Later, we were messing around in rehearsals with a Deep Purple song (,,Stormbringer” I think) and I stepped up to the lead vocalists mic and started singing and couldn’t believe what I heard! I could sing. We sacked the vocalist and I was the lead singer hahaha!!’’ 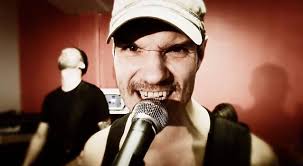 What would you’ve become if not a musician?

What sparked your interest in music?

,,Listening to my mum’s records as a toddler. She had seriously good taste in music. Elvis, Motown, Hendrix, Led Zep etc.. Cheers Mum!’’

Who are your influences as a singer?

Any secrets on how you keep your instrument in shape?

,,I don’t do warmups or anything like that. I guess I’m just blessed with a strong natural voice. But the obvious is stay away from smoking, alcohol and bad women!”’


,,A streamed live concert is being discussed as we speak.’’

A lot has changed over the last couple of months. No chance to tour to promote the album live. How do you adjust to the new situation?

,,We do what every band seems to be doing right now. I actually like the idea of using FB, Insta and whatever else to promote music. There should be even more of that and less of pictures of people’s dogs, babies and fucking dinners!’’ 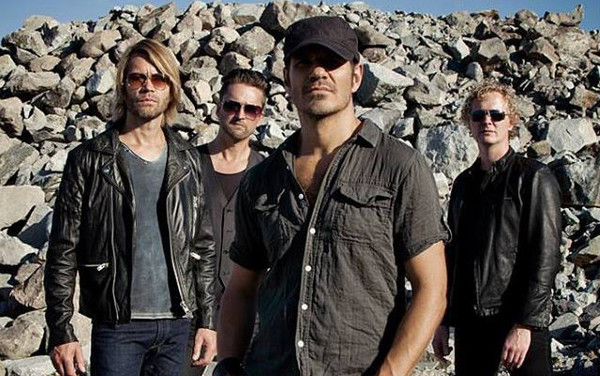 Usually touring is a necessity to keep a band alive. Now bands and artists can’t go out and play. What do you do to stay visible and interesting for the public?

,,We have posted and will be posting more home videos of the songs from the new album and also a streamed live concert is being discussed as we speak.’’

What have you planned to survive as a band in these unprecedented times?

,,We´ll just keep going and keep delivering new songs and pray that these disturbing times will end soon for all.’’

How difficult is it to plan a next step while the future is still uncertain?