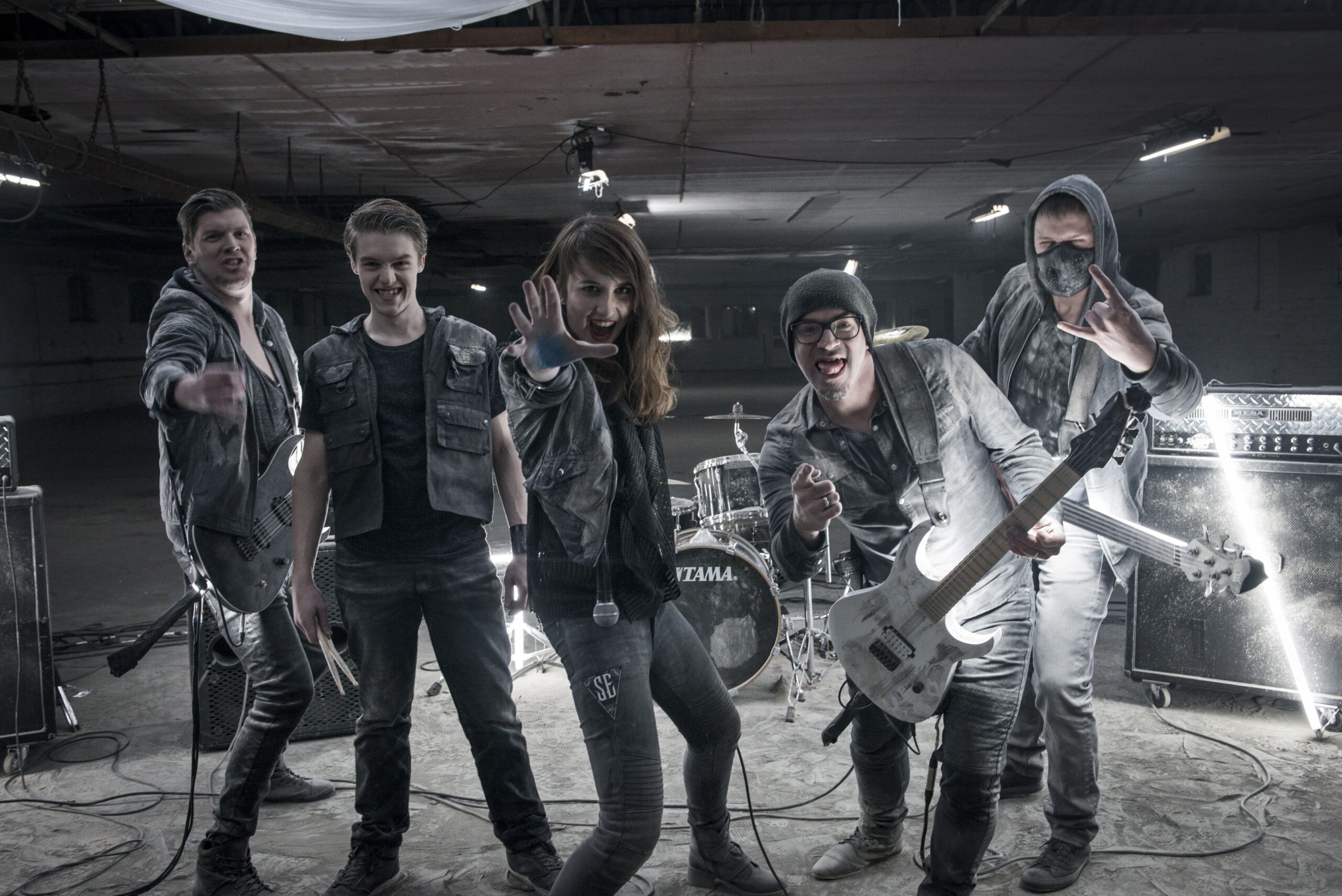 Start Of A New Era

Spoil Engine originally started as a Belgian metal band but has now become a Belgian/Dutch collaboration because of 22-year-old Dutch singer Iris Goessens, who became a member in 2015. With ‘Stormsleeper’ just released HeadBangers LifeStyle contacted her and spoke about her challenges, goals and why you should pursue your dreams even when the outside world thinks you suck.

Spoil Engine was founded in 2004 and nowadays guitarist Steven ‘gaze’ Sanders is the only founding member left. The band released three albums in different line-ups with mixed success but it wasn’t until 2015 that they moved into a slightly different direction and got momentum. After their last singer left it didn’t take long before they found a young Dutch singer to fill in the vacancy and so started Spoil Engine 2.0. 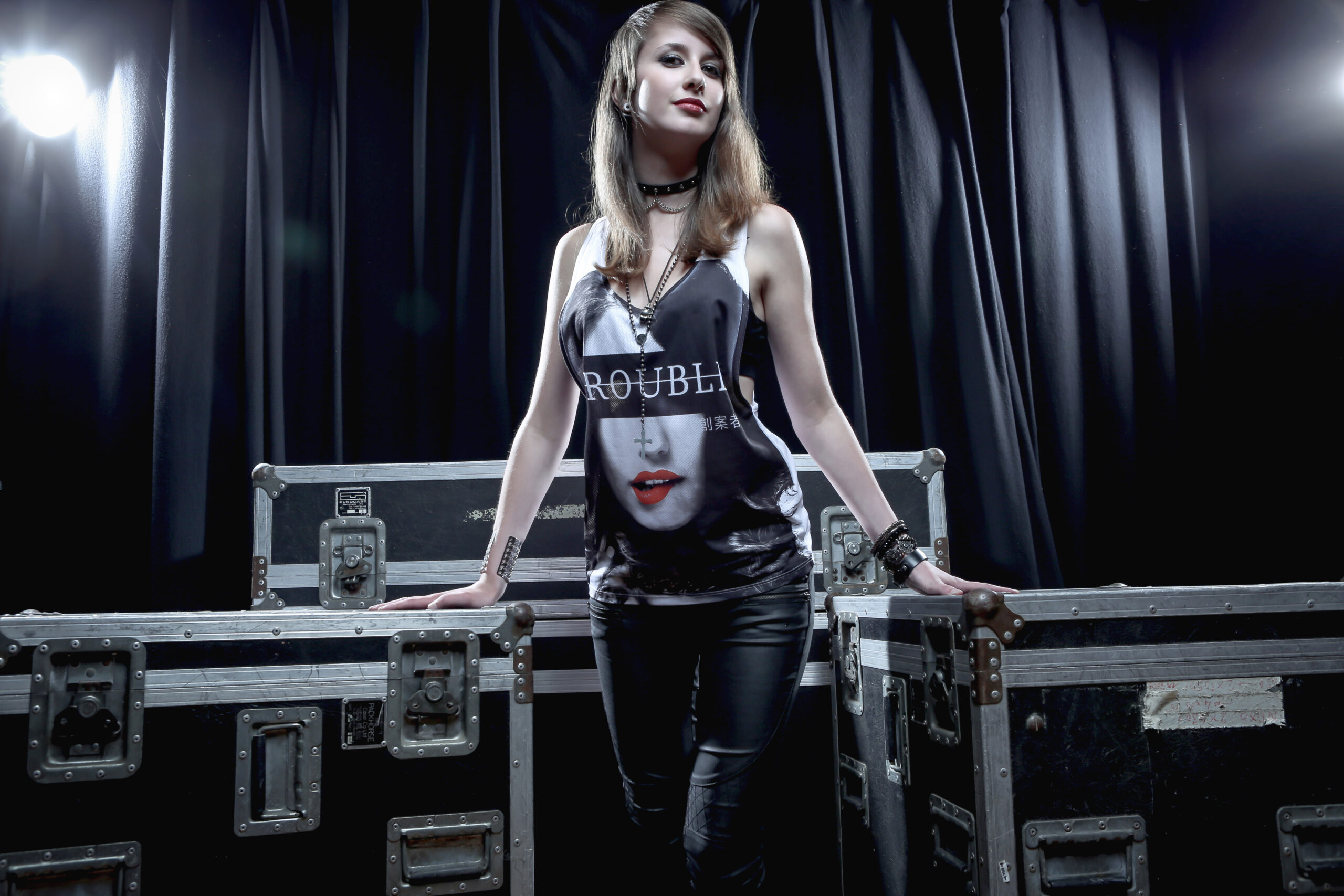 Iris, did it take you long to say yes when you were asked to join the band?
,,Not at all. I was in between bands and had just decided to quit school when I received a phone call. They mailed me a demo on which I included my vocals and they liked it, so another week later we met in a rehearsal room near Ostend which went great. After another rehearsal in Antwerp I was in the band.’’

Is song writing a problem because of the long distance between you and the other band members?
,,Not really, long car drives relax me but I don’t have to go there often. They rehearse every week but it isn’t until shows are approaching that we all get together. We work very efficient, also regarding song writing. Both guitarists keep sending me ideas and I do my thing. We program drums and bass and when a song is about 80% ready we finish it all together. Especially during the first year we wrote a lot because we had to find a new sound that fitted me. I wanted it to be more melodic. I knew they were more into thrash metal but that’s not totally my thing and I told them so. They were very open-minded and wanted a new start, so no copy of their old singer. His vocals were more distorted, mine are both clean and grunting so the difference is clear.’’

At the end of 2015 Spoil Engine released a 6-track EP also titled ‘Stormsleeper’, just like this one. The 6 songs can also be found on the new CD. Why not a completely new album?
,,Because hardly anybody heard these songs. The EP wasn’t on Spotify or anything because almost immediately after its release we started talks with Arising Empire/Nuclear Blast. They wanted to turn the EP into a full album with 4 additional tracks. And we thought it would be a waste to do nothing with the songs especially because hardly anybody heard them and they are great songs.’’

Who is responsible for the lyrics?
,,I am. I prefer writing my own stuff. When we didn’t have enough new songs yet we also played older material but that just didn’t suit me. I do like it when somebody writes with me, giving me ideas, but I prefer my own lyrics. Inspiration comes from the world around me. In fact ‘Stormsleeper’ is a made up word. A stormsleeper is somebody who goes into some sort of hibernation until the restless and turbulent times we live in now are over. The current world is too confronting for them and the theme of the album is some sort of wake up call. ,,Black Sails’’ for example has a positive vibe. Grab yourself together, unite and make something good out of it, so it’s not all gloomy.’’

Do you feel you have to prove yourself because you’re the youngest of the band?
,,No, we’re all on the same level. If I’d had the feeling I had to prove myself I wouldn’t have started it. From the first moment on it was chill, all ideas are taken serious. I made the video clip for ,,Disconnected’’, how is that about trust?’’ 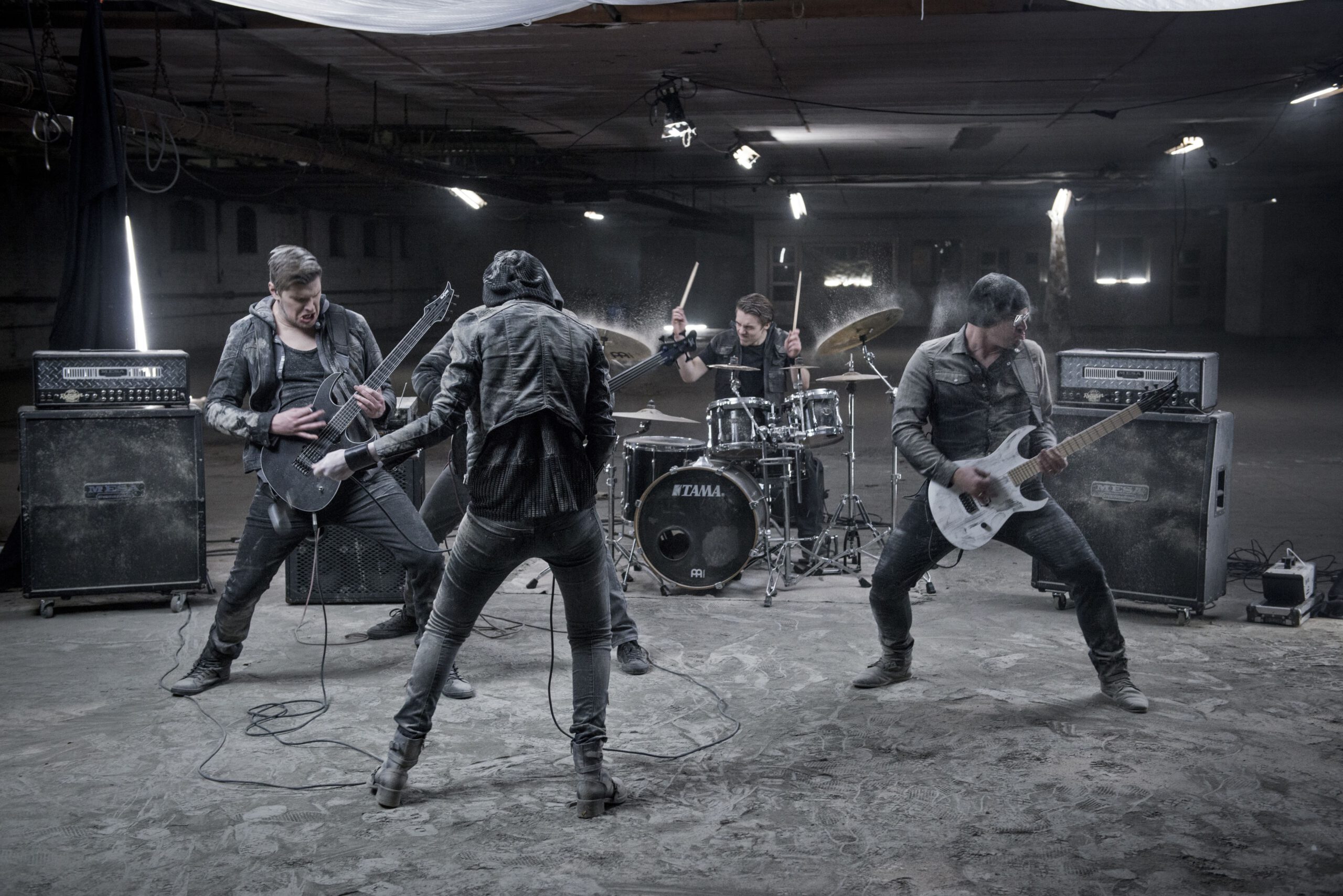 Do the older members see you as the perfect liaison between Spoil Engine and the younger generation? Because you know how the younger people think?
,,Not so much a younger audience as well as a wider audience. That is our goal. The songs work great in a live situation not only with the technical metalheads. I do test my songs on others and when they start humming along with them it is cool.’’

Do you have a role model as a singer?
,,No, I love to watch as many live shows as I can and I think bands like Bring Me The Horizon and Slipknot are great. Not only from a musical point of view but I love the show element. I don’t like it when nothing is happening on stage.’’

What is the last thing you do before you enter the stage?
,,Well, there was the tradition of taking a shot of Jack Daniels but I don’t really like that without cola so… I do voice exercises that I learned at Vocal Center, Maastricht, the same school at which I am a vocal coach myself now. You put a resonance tube in a bottle containing water and then you blow and make sounds. People think you’re retarded when they see you do it, but it really is a cool exercise.’’

What is the ultimate kick of being on stage?
,,The reactions of the audience. When you reach the back rows you know you have succeeded.’’ Is there a difference between Iris off stage and Iris on stage?
,,Absolutely, off stage I am boring and much quieter unlike on stage. On stage I’m wild, at home I’m hardly moving, haha, those are two opposites. Being on stage is cardio and when I haven’t been playing for a while I become restless.’’

Do you have a special item you have to bring with you on tour?
,,No, I’m not superstitious. I have to remember not to lose my phone though and I bring my own microphone because I have a little mysophobia. If I can change the mic after bands played before us I will because there’s all kinds of stuff on it. I am curious to see how that will go on the coming tour because we all like it super clean, haha. So don’t expect dirty rock ‘n’ roll scenes.’’

What are your goals?
,,My first goal was that I wanted to play at the Graspop festival before I turned 24. I’m 22 now and played there. Then I had to come up with something new so doing a real tour would be nice but we’re going to do that this year so I must find new goals again. Playing big arena’s will be it.’’ 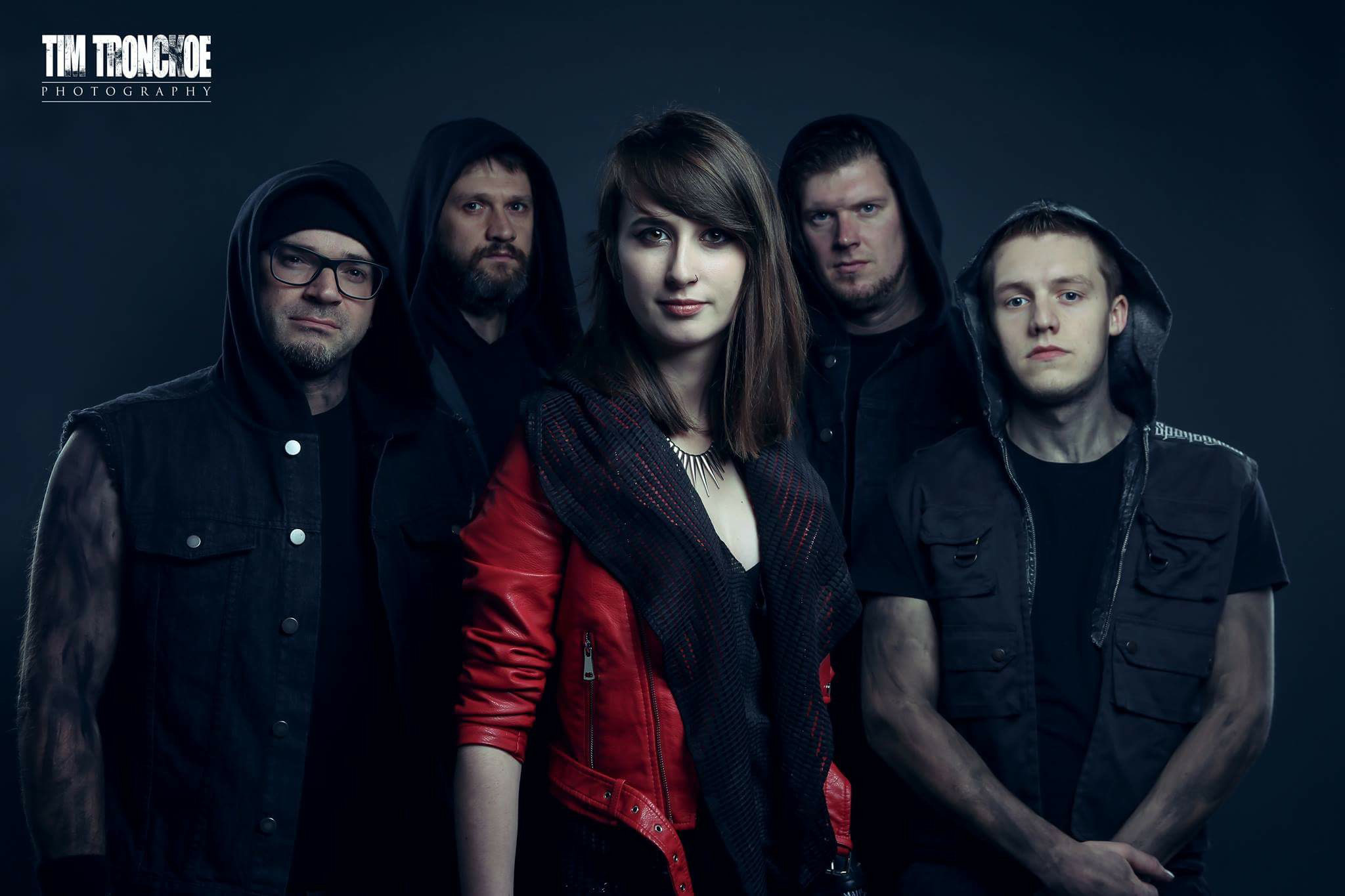 Do you have an advice for kids who want to become a musician?
,,Just go for it. I know so many people who are discouraged by their parents or friends only being told they will never make it and they suck. Fuck it, I sucked as well but I simply started performing and showed my face wherever I could. Take part in contests, put clips online, keep working on yourself to improve. If I hadn’t done so I wouldn’t be in Spoil Engine now, because they also saw the video’s of my previous bands in which I was jumping around and trying my best. It wasn’t good but they saw something in me and that is what it’s all about. Believe in yourself.’’
—
Follow SPOIL ENGINE on Facebook