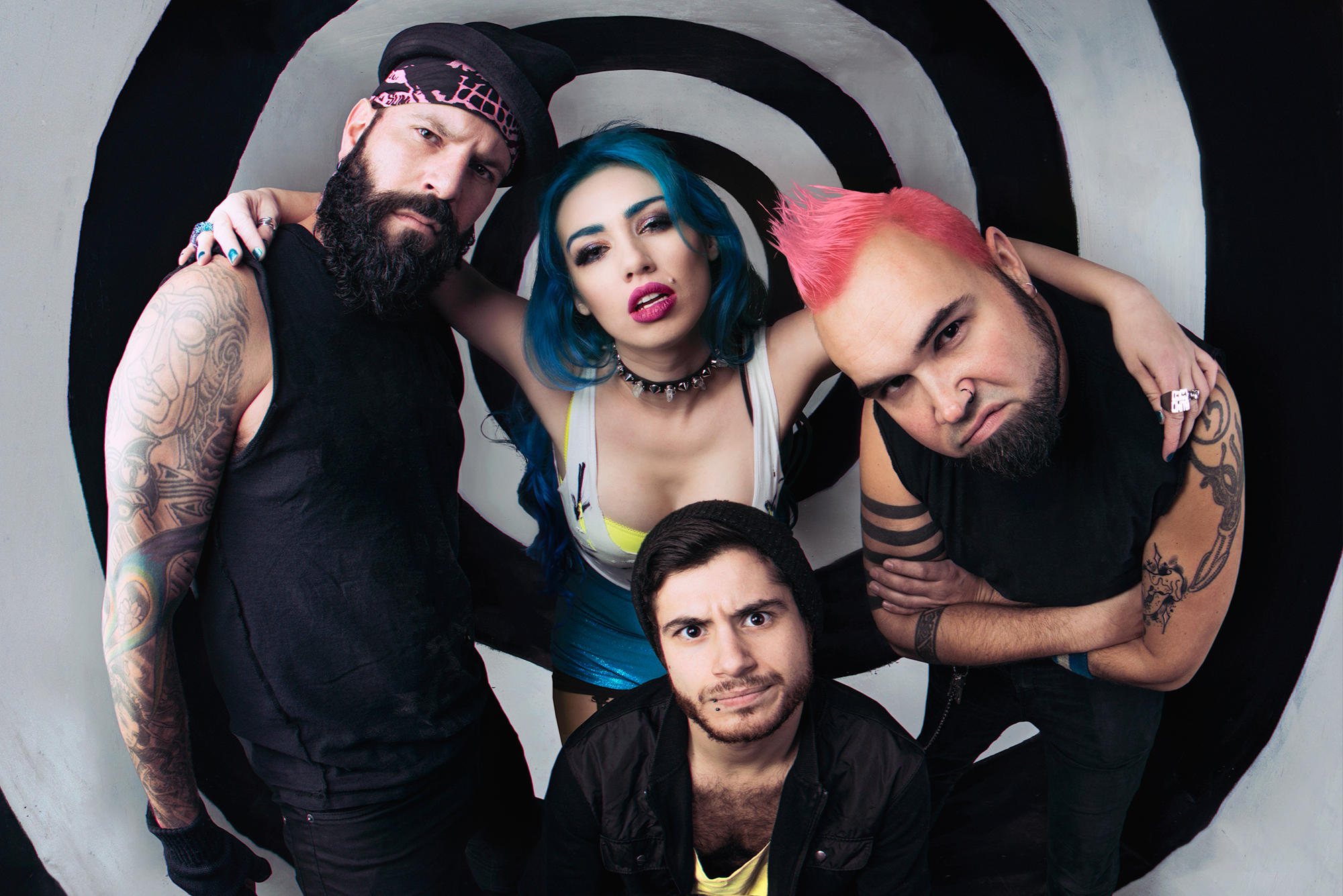 Take The Train To Cyco City

Sumo Cyco from Canada is definitely a band to put on your radar. Not only do they write killer music and play epic live shows, they also do everything themselves to prove how much control an artist actually can have without a nonsense industry who rather spend their time and money to celebrate themselves. The second album `Opus Mar’ is out now and shows a big step forward to the already amazing record `Lost In Cyco City’. The best thing is always to listen to new music yourself, but to simply explain the style I would say: Imagine Skindred would gangbang No Doubt and the result would be Sumo Cyco. HeadBangers LifeStyle had the pleasure to meet the entire band before their show at Z7 in Pratteln, Switzerland and I can assure you, funny would not describe this interview at all. My belly still hurts from laughing. 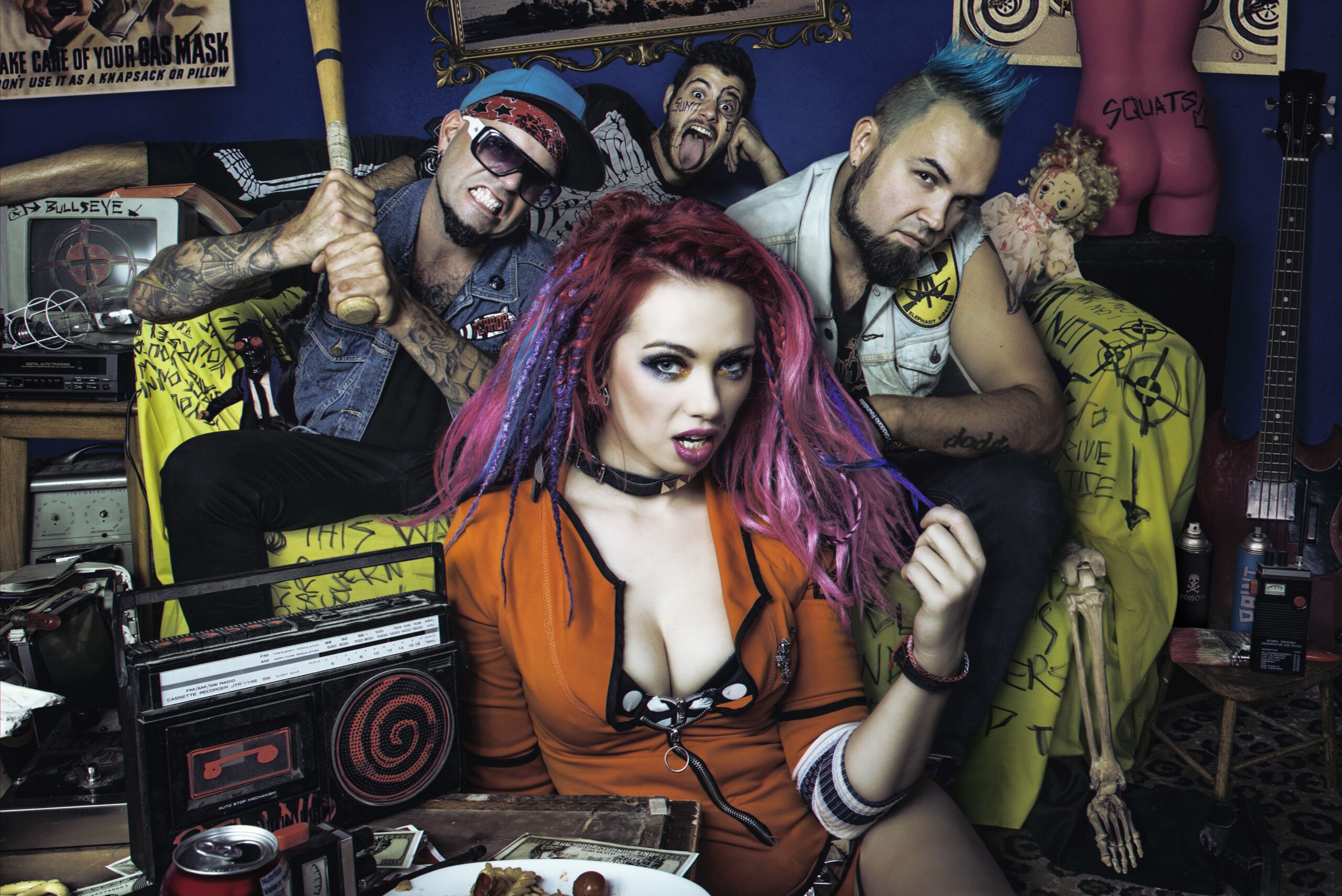 You guys are together for 6 years, you just released your second album `Opus Mar’ and in that same period of time you released about 17 music videos. Is it harder to write music for a record, than doing video clips?
Matt D.: ,,I think videos are harder to do than writing music. I write riffs all the time but building a set and shoot a video takes almost like forever.’’
Skye: ,,Most bands show up at the day when everything is set up, but we do it all ourselves, from preparation to shooting to editing the video in the end. But I don’t want to complain, as I love the creative part of it.’’

How do you guys fund all these video productions?
Skye: ,,We are pretty good in keeping the costs low. We bought our own equipment, so we have no renting costs anymore. And also a lot of friends are helping us doing them. On top of that, we are using the same stuff over and over again…’’ 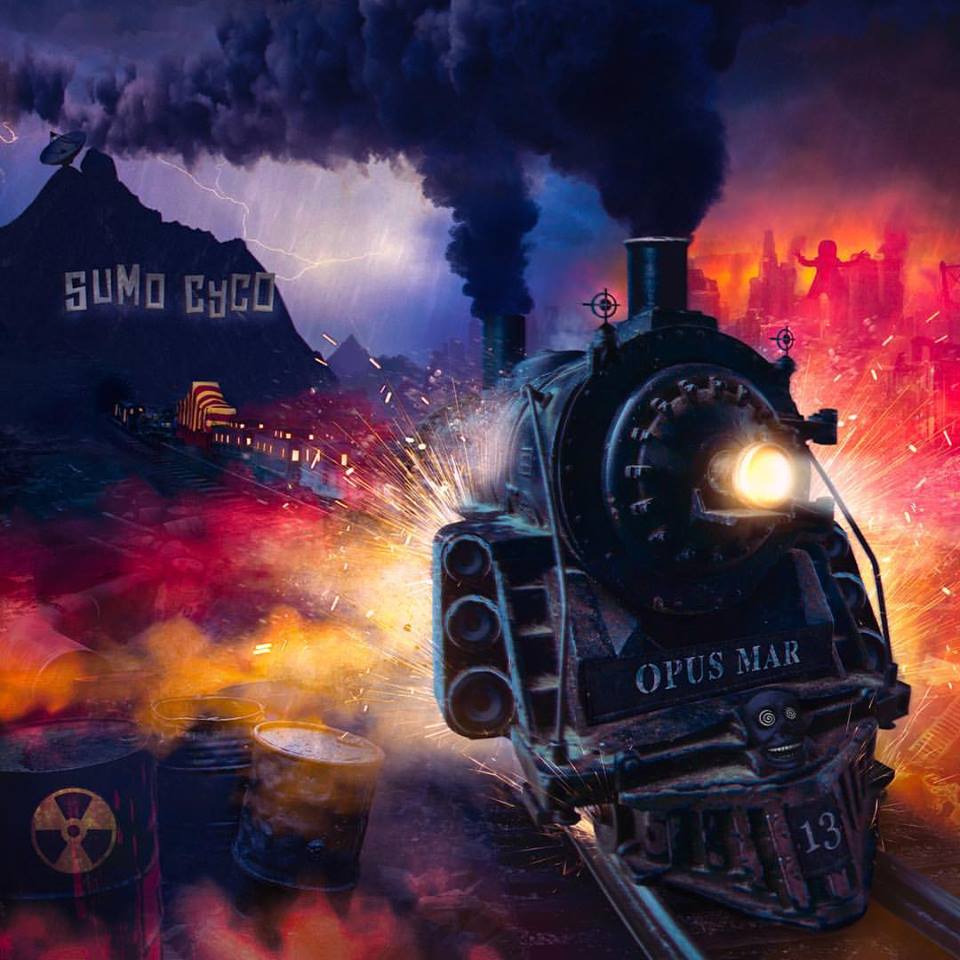 On your new album `Opus Mar’ singer Benji Webbe from Skindred is featured in the song ,,Move Mountains’’. How did you got hooked up, you all being from Canada and Benji being from the UK?
Skye: ,,It happened because I’m obsessed with Skindred and I just stalked them. It all happened because I sweet-talked the producer. And by building up the connections, we figured out on how to hook up with Benji.’’

Skindred is a super busy band. How long did it take to finish the co-operation from getting Benji into the studio until shooting the final video?
Skye: ,,We decided to try and have Benji coming to the studio at the beginning of our tour and ended up finalizing the song at the end of it, so actually just a couple weeks in between. As for the video, it took around another five months and another tour until we came to Wales and had the chance to film together with Benji. Of course he took us out and he got us completely drunk. He’s an amazing guy.’’

What does the album title `Opus Mar’ actually mean?
Skye: ,,Opus is a body of work by one composer, which is us as a band and Mar stands for that one scar that make something imperfect. I liked the sound of the words…’’
Matt D: ,,What it actually means is it’s just a bunch of imperfect songs…’’
Skye: ,,The whole album is about how imperfect the world and its humans are. It also contains thirteen parts of a train, transported through thirteen songs. I was inspired by my dad’s great uncles very old train set which we were allowed to use for the artwork and videos.’’

You guys are from Canada. When people think about Canadian music, they immediately think about Nickelback, Bryan Adams and Celine Dion.
Ken: ,,That’s very unfortunate.’’
Matt D.: ,,We’re proud of every artist that is coming out of Canada. There is Monster Truck, who are good friends of ours.’’
Skye: ,,There’s Billy Talent, Alexis On Fire, Cancer Bats.’’
Matt D.: ,,Celine still rocks and Billy Talent rocks too. Nickelback, well, I don’t listen to them but they figured out how to make a lot of money and that’s not easy to figure that one out.’’

Its great how you talked nicely about Nickelback without having me finish the question. How are you going to change the fact that people think about Sumo Cyco when asked about Canadian music?
Ken: ,,Well that changes everything.’’
Matt D.: ,,I don’t think we represent Canada very well. We don’t have a lot of hometown support yet as somehow they didn’t understood our sound well.’’ 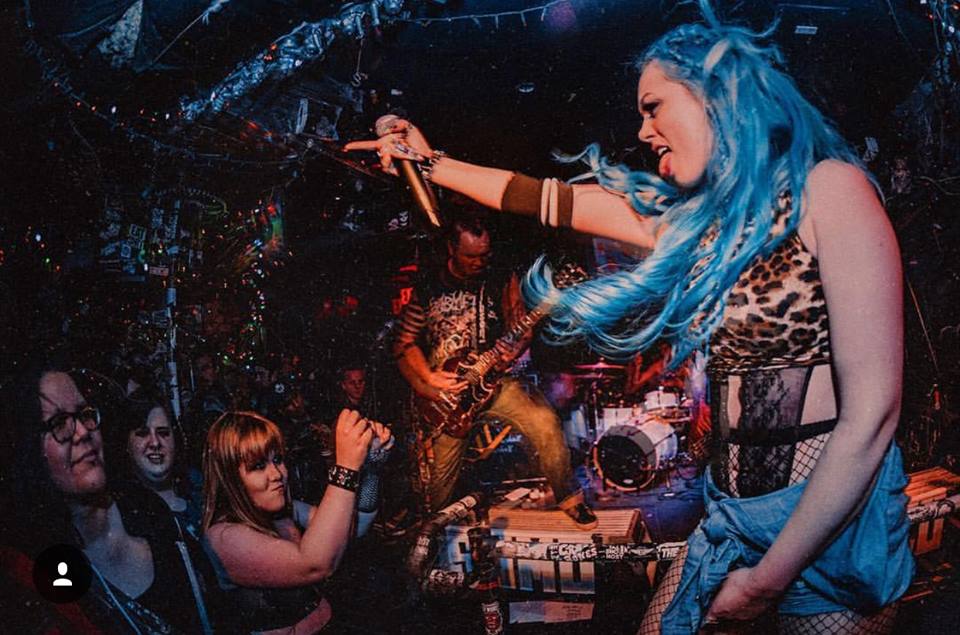 Skye, the first time you showed up in the music scene was by the age of 15 as the hotter version of Avril Lavigne.
Ken: ,,Well put, sir.’’

When did you ended your puberty and decided to do rock/metal?
Skye: ,,Matt and Ken were in my backup band in my pop era, they saw me go through puberty. I think I always had rock in me, a change like this is normal for a teenager growing up. I worked with a lot of people from the scene, so it didn’t came out of the blue to go for this kind of music. I wanted to rebrand myself and have more control about my career.’’

You also did some voice work for Barbie, right?
Matt D.: ,,What a great follow up question.’’

What cartoon character would suit you today?
Skye: ,,Definitely Tank Girl, she is one of my favourites.’’
Ken: ,,You’re more like a mix between Shrek and Arielle.’’ 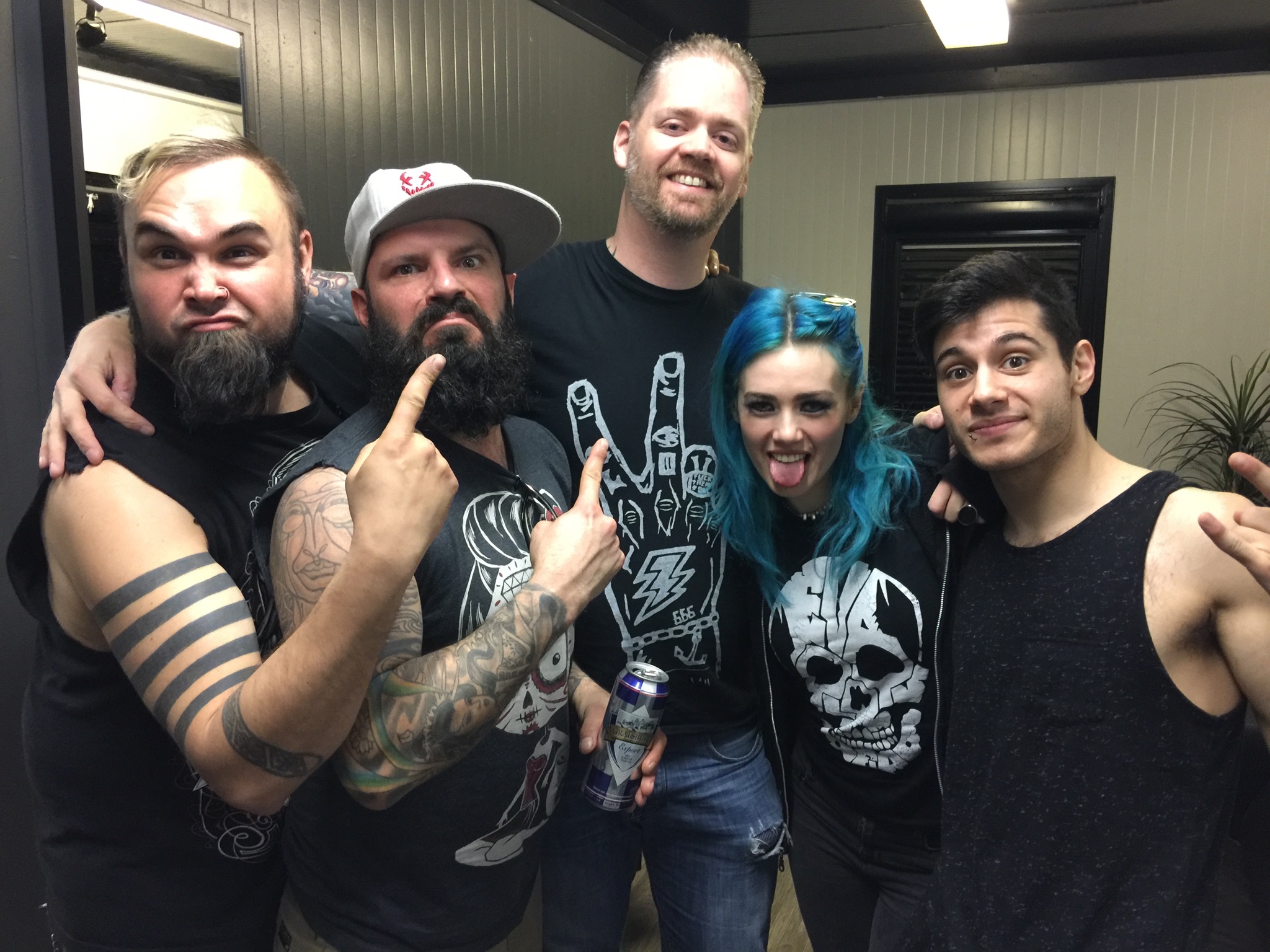