TAGORE GREY, Guitarist Of THE TREATMENT 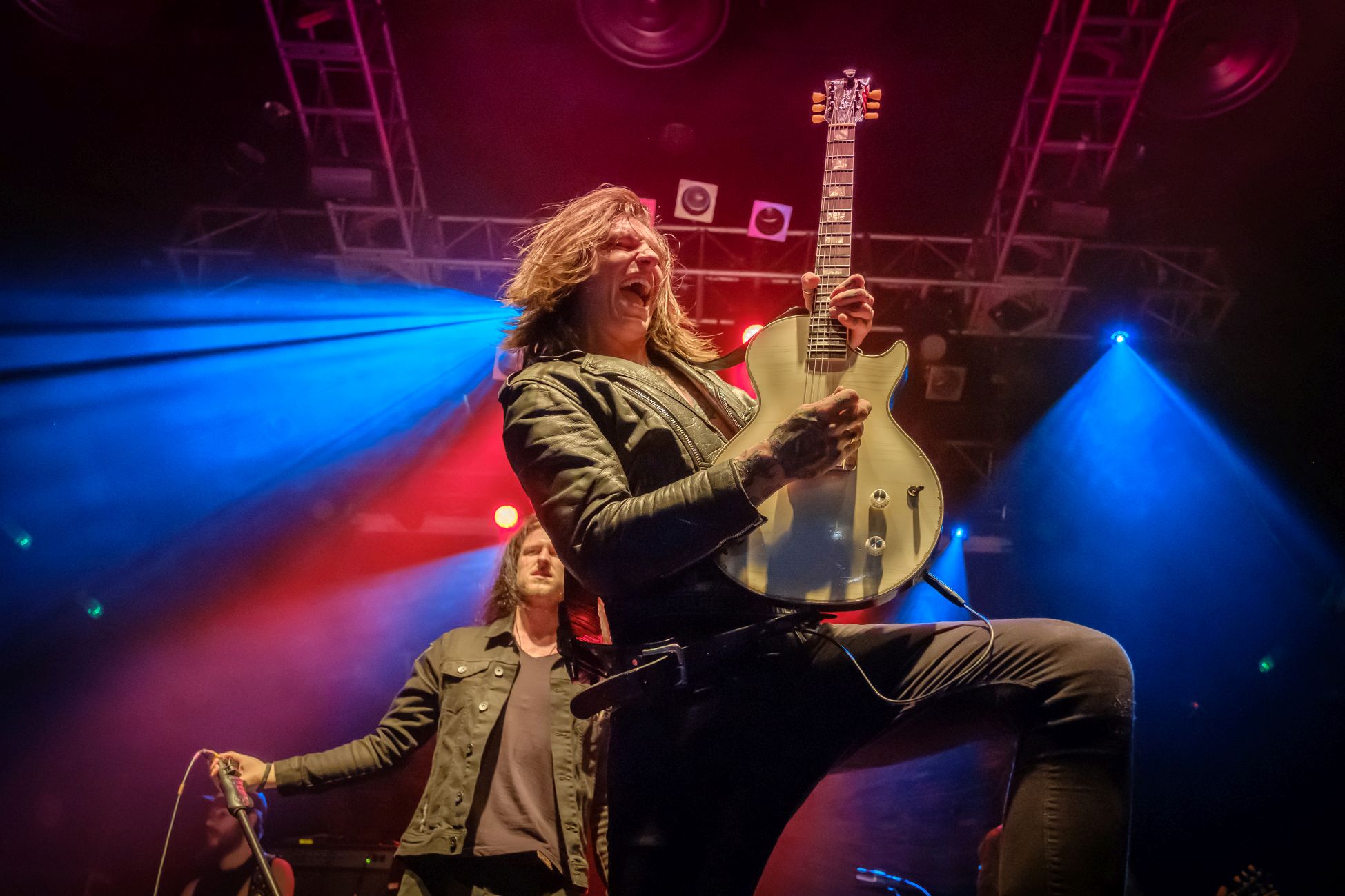 TAGORE GREY, Guitarist Of THE TREATMENT

,,We were 16 and crazy when we started and over the years we grew up.''

Ever since the start in 2008 and the release of their first album ‘This Might Hurt’ in 2011, when they were still in their teens, the career of British no-nonsense rockers The Treatment is an interesting one. They played with big name artists but also went through several line-up changes resulting in their best line-up to date. The core of the band, drummer Dhani Mansworth, bass player Rick Newton and guitarist Tagore Grey, is still intact. Since 2015, they have Tag’s younger brother Tao as second guitarist and recently Tom Rampton as the new singer. With the entrance of Rampton, with his raspy Bon Scott-like voice, the band sounds more like their influences than ever before without losing its own identity. With the fourth album ‘Power Crazy’ just released; HeadBangers LifeStyle’s Ron Willemsen contacted Tag Grey for an update. 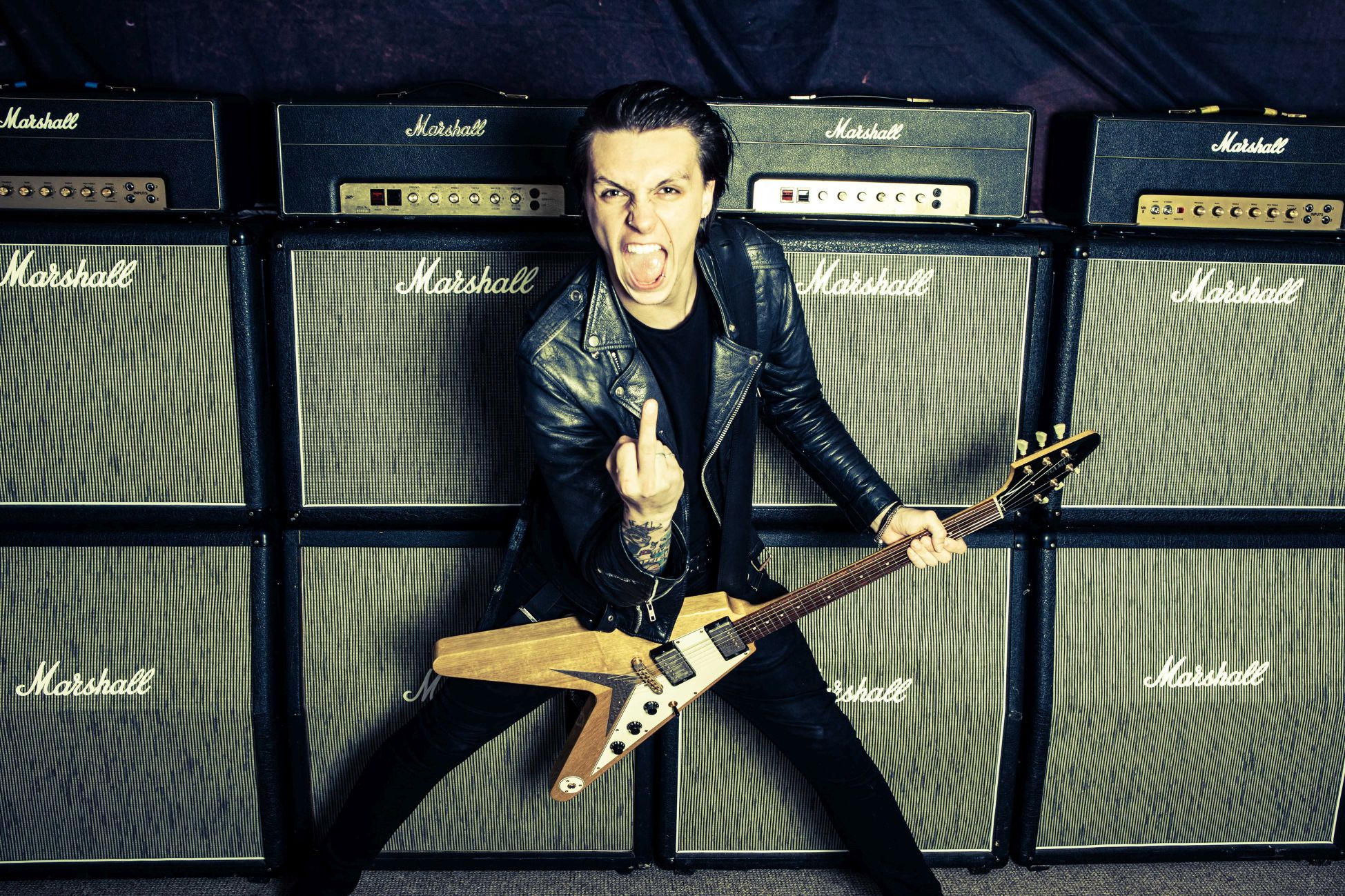 Tagore Grey  Photoshoot for ‘Generation Me’ in 2016
Tag, ‘Power Crazy’ is the fourth The Treatment album. Have you done anything different this time or was it the usual way of working?
,,There definitely was a different energy. When Tom came on board, we decided there would be no ballads on the album. We were in a weird place, been through a lot together and Mitch [Emms, previous singer] left at a bad time. When Tom came along, we reinvented ourselves and had enough of the bullshit. We just wanted to make a killer album with every song filled with hard rock energy. We always wanted to push the boundaries, try new ideas but finally we really found what The Treatment suits, what people like and what we really play the best.’’

How did you find Tom?
,,Dhani found Tom, he has a sick radar for it. He found him on YouTube and messaged him. Tom had heard of us; he came down and he was very serious about it all. He moved in with us and it all went from there.’’

About the same circumstances as with the first album.
,,Exactly, we all live together and that is all down to Laurie [Dhani’s father / manager]. We’re together since I was 16 when I took the train to Cambridge to audition, stayed for a week, jammed, played two chords and they said, ‘you’re the guy’. I went back home, told my parents ‘mum, dad, no more school for me, I’m going to Cambridge, I become a fuck up’. I threw a mattress and some other stuff in the back of a van, drove to Cambridge and the rest is history. It has always been a family thing; we argue like family but at the end of the day we want to be part of a great band and that has been so from the start. When Tom came along it was not different. If you want to make music your life, you need to become one of the lads. We not only need a voice; you have to live with each other. It is a mega commitment. You have the recording, press, touring and a life outside of it: girlfriends, jobs, and so on, but you always have to remember that the music that you’re making is number one.’’

,,It’s like a little gang, 5 guys bonded by the magic of being in a rock ‘n roll band.” -Tagore Grey

Is that the strength of The Treatment? This whole family thing?
,,I don’t know, I have never been in another band. I spend half my life with these guys and that is how close we are. For me it’s important and I wouldn’t want it any different. It’s like a little gang, 5 guys bonded by the magic of being in a rock ‘n roll band. Also, Laurie is a huge part of the band, he is the man that makes it all happen.’’


,,We just wanted to make a no-nonsense album with big riffs and big songs’’ -Tagore Grey 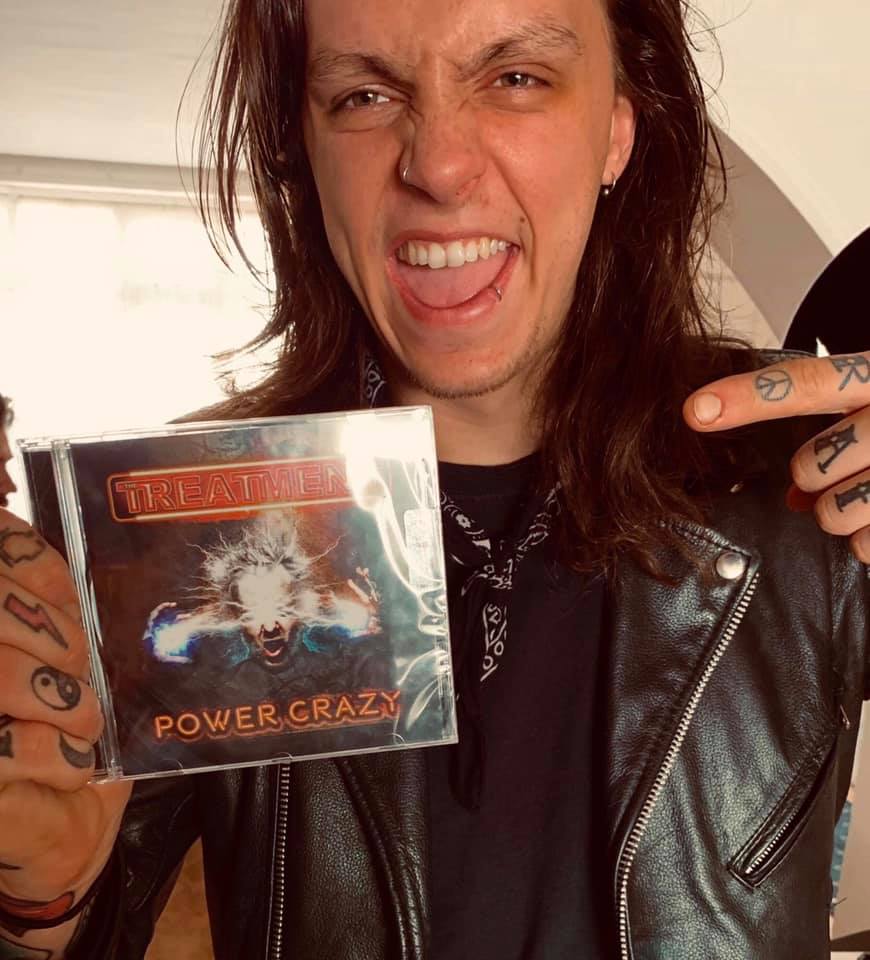 Photo taken from Tagore Grey’s Facebook page
What was your goal with ‘Power Crazy’?
,,We all have in common that we grew up on AC/DC. We’ve always done what came natural to us, that’s why we had changes from album to album. You see the band grow; we were 16 and crazy when we started and over the years we grew up. This time we just wanted to make a no-nonsense album with big riffs and big songs, an album we just wanted to write.’’

On ‘Power Crazy’ there are 13 songs, one of which is an acoustic version of ,,Bite Back’’. Was that done to let Tom’s voice shine?
,,Want the real truth? We were so sick of the studio that the quickest we could do was put an acoustic one together. It became one of my favourite tracks as it came out brilliantly. When you are in the studio for nearly a year you want to release it and not suddenly have to come up with a bonus track. It did cost a lot of sweat, but it turned out quite nice. We are not an acoustic band, absolutely not, but it has a nice vibe, I love it.’’

Is there an overall theme on the album?
,,No, on ‘Generation Me’ there was but this one is mainly about drinking beer, getting girls, getting into fights. A collection of songs with no deeper meaning, just rock ‘n’ roll.’’

,,I’m proud of my musical career so far’’ -Tagore Grey

Do you feel that The Treatment gets the recognition they deserve?

,,That’s a hard question to answer. For what we’ve done in our career so far it’s amazing. We played Wembley twice with Status Quo, that is like a dream come true, we’ve opened with Kiss, Mötley Crüe, Alice Cooper, Thin Lizzy, Slash, Slipknot, you name it we did it. We’ve had more chances than most young bands ever had, achieved more than most kids will ever achieve, but at the same time I’d love for us to be bigger than we are, play Wembley by ourselves, but that is my dream. What we’ve done so far, I couldn’t have even asked for more. I’m proud of my musical career so far, I’m not Eddie van Halen, I’m not Angus Young, I’m not some outrageous guitar player, for where we’ve got, it blows my mind every day but that doesn’t mean I don’t have dreams for the band to hit the next level.’’ 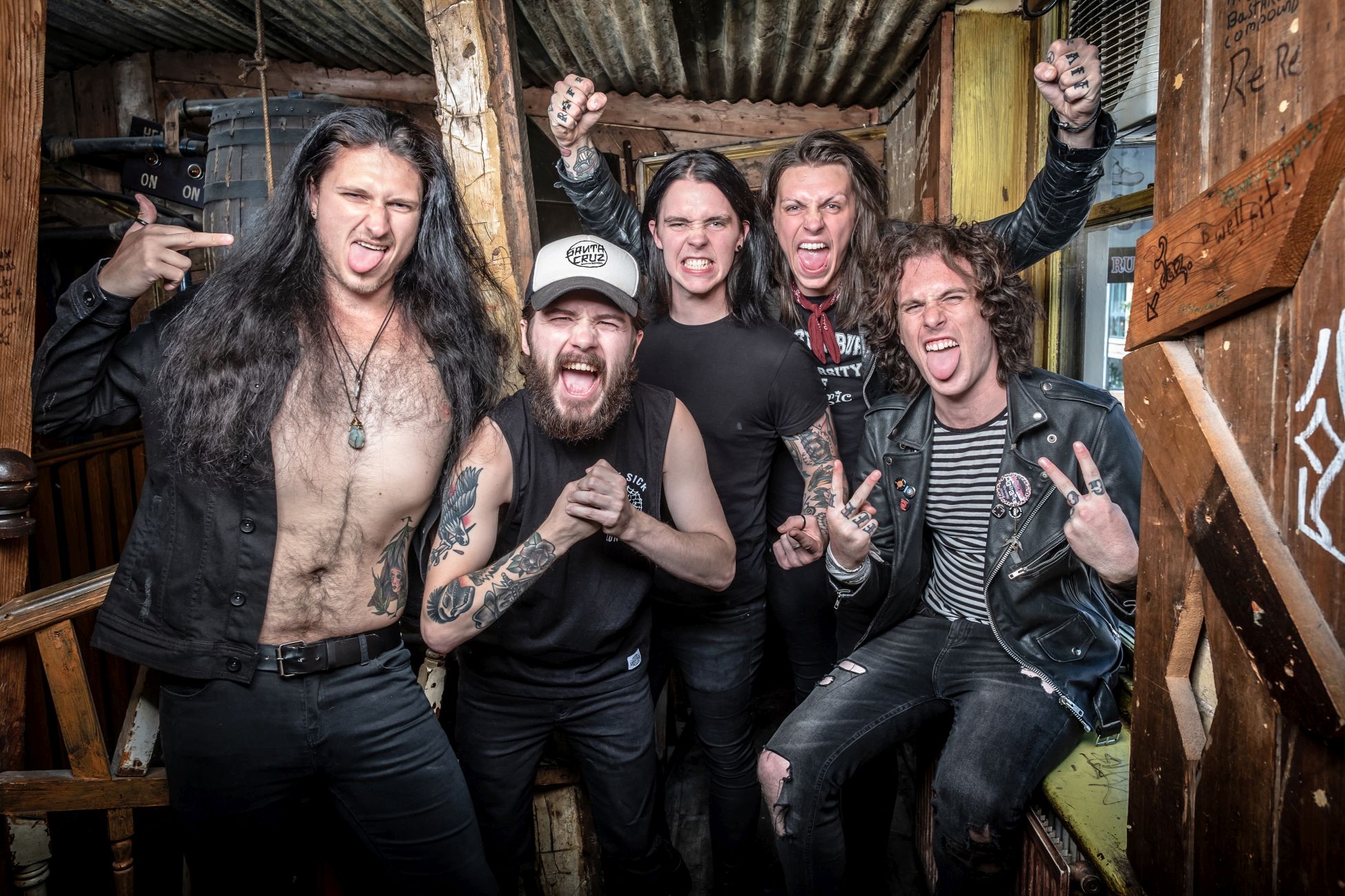 The Treatment 2019
Since 2015 your brother Tao is also in the band. How is that?
,,The greatest thing ever. We took a real hit when we lost Ben [Brookland, first guitarist], it was like growing up with an older brother because Ben was older than me. Tao always came to our shows and Dhani suggested to try my brother. I never really thought about it, but he did an audition and was in the band. We’ve always connected, we have similar interests, so it is a perfect match. There is never any competition between the two of us. We’re not like the Gallagher’s [Oasis] who beat the shit out of each other, we want to take on the world together.‘’

,,I was never into music…’’ -Tagore Grey

When did you start playing guitar?
,,I think about.. when I was 10 or 11. I do remember my first CD was a rap CD by Eminem. I was never into music but always into outdoor stuff like cycling. Later my parents bought me the DVD AC/DC at Wembley and when I saw Angus play, I wanted to play guitar. Tao and I both followed guitar and piano lessons for 4 or 5 years. We always went together to lessons and that was the moment it caught me, and I started saving to get the Gibson SG. I play Les Paul now because I’m too tall to play the SG, but I still have those 2 SG’s though as a tribute to Angus.’’

Dhani, Rick and you are the core members of the band. How do you guard the Treatment sound?

,,Interesting question. We always had Laurie, he and Dhani put the band together. He is the driving force behind it and as long as they are there we don’t have to worry about the sound. I think with Mitch we did change the sound a little bit; we were all growing up and tried different things. And yes, we did cut our hair, well, big deal, everybody between 16 and 26 does that at some point. We grew up in the band and changed. ‘Generation Me’ sounded different but there are still great songs on it. Now we’ve grown up, settled in who we are, and this is what we do best. The audience can follow us grow up on stage, it is all part of a band life. You’ll never be the same forever, that’s what connects you with the fans. Now with Tom it’s great fun, the label is behind us, the album is being pushed. Music is a hard thing to do, it is a labour of love. Even touring gets more expensive. You only see bands who really want to be there which is good.’’ 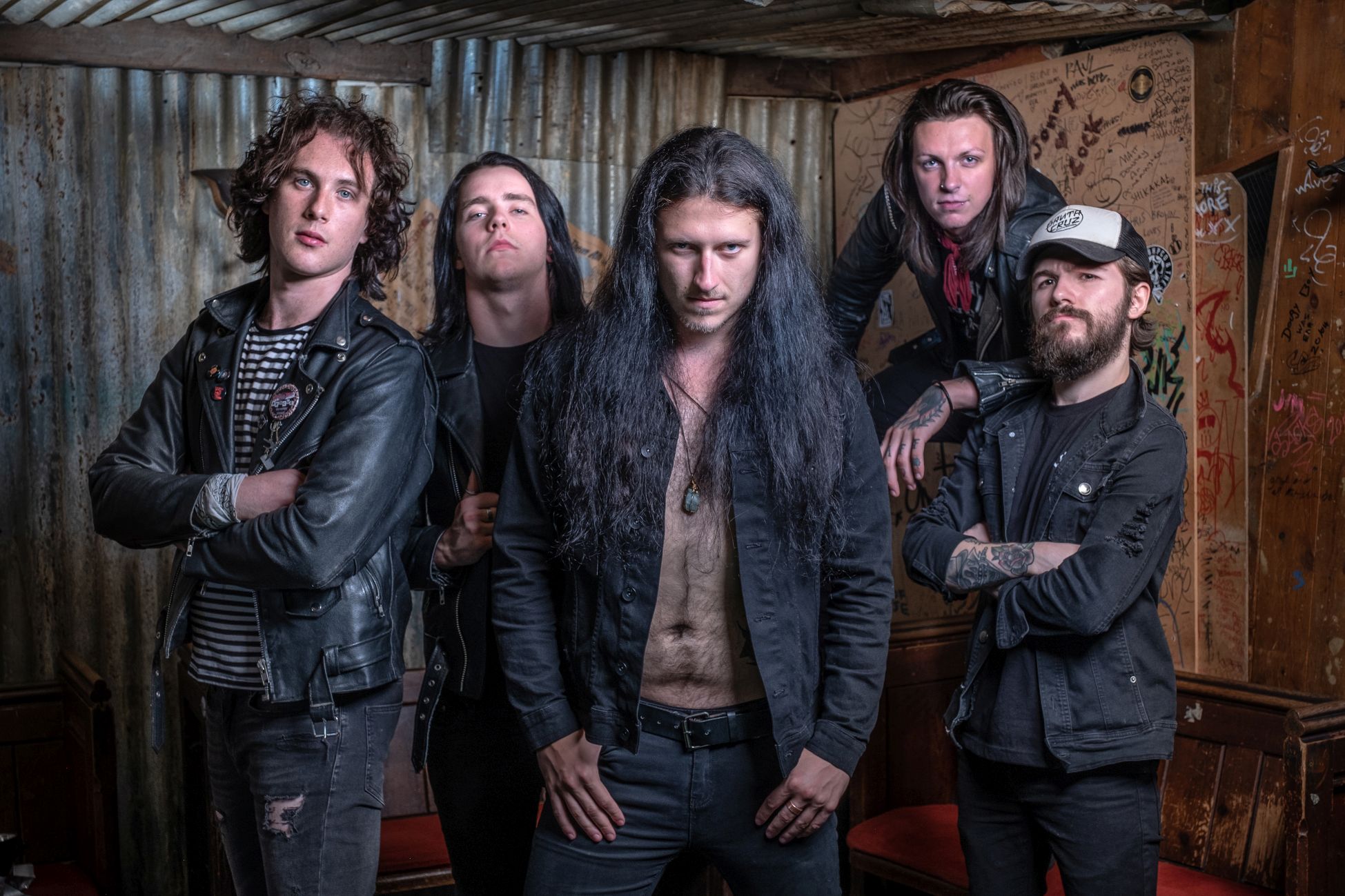 The Treatment  2019
Which one is your all-time favourite Treatment song and why?
,,I have to do a couple. ,,I Will Be There’’ from ‘This Might Hurt’, I love the vibe in that track. From our latest album ,,Falling Down’’ because of the vocal harmonies and the galloping feel and ,,Luck Of The Draw’’ which is almost perfect with its nasty voice, nasty guitar and great lead guitar… and I shouldn’t forget ,,Running With The Dogs’’, a live favourite with an infectious chorus, just brilliant.’’

You just started your tour in the United Kingdom. Any plans after that?
,,Yes, a couple of festivals and off to Russia midsummer, I am so excited about that. Never thought to get there because it’s pretty expensive, but it’s a whole new territory, which is interesting. As a kid I never dreamt of going to France let alone Moscow, so it’s all amazing. After that we’ll see what happens.’’

Over the years you have toured with some big bands. Which one is still on your bucket list?

,,That must be AC/DC. That is one of those bands for which opening doesn’t do you any good because they are so big. One of those bands on a godlike level, larger than life, but in terms of fun experience it would be opening for AC/DC. Other than that, I would like to open for The Cult, they still put on good show.’’
—
Follow THE TREATMENT on Facebook
Photos by: Julian Napier unless otherwise indicated