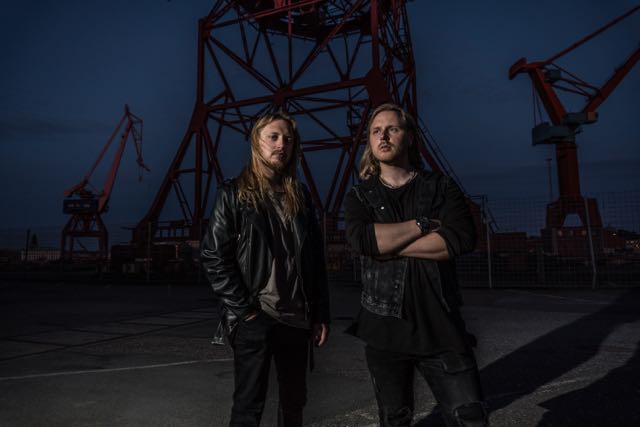 ,,We Follow Our Passion for Melodic Rock and AOR''

With Taste releasing their second CD entitled `Moral Decay’ they are also reigniting the spark of melodic rock and arena rock. Awesome guitar shreds combined with pompous swirling keys ignite the flame, which is set ablaze by the typical sugar coated choruses and larger than live choirs. A sauce of melody and fine melodic craftsmanship, thick as molasses, is poured over the massive melodic bodywork of the songs giving it just the right amount of comfort. The occasional jaw dropping guitar solo of keyboard intermezzo spices up this exquisite dish server up by the two Borg brothers, likely known for their work in Art Nation. Much like new bands Nightflight Orchestra, Revolution Saints and Palace or One Desire, TASTE bears the torch for modern melodic rock and is not hesitating to run point either. I meet up with vocalist/guitarist/producer Christoffer Borg, who immediately after my review got in touch with me to address some minor mishaps and flaws in my review. First of all Christoffer; congratulations on the sublime new album `Moral Decay’!
Upon release of the review you immediately contacted me to explain some mishaps in my review in regards to instrumental duties spread between you and your brother Felix. Please explain.
,,For me it is very important that we get credit for what we do. Felix did a great work on drums, bass, acoustic guitar and keyboard. That’s like the majority of the instruments played on the album. So whenever he is credited with only one or two instruments, I am fast to correct. Maybe I’m proud of him? I guess I am!”

The album recently released is the second album of Taste. The self titled debut dates back to 2012. Why did it take you both over 6 years to release this follow up?
,,When we joined Art Nation it took up all the time we had. It was a decision we took together and also, Taste didn’t have any permanent members as were Art Nation was a full band.’’

In the meanwhile you both where responsible for the bodywork of songs in Art Nation. What’s the status of the band and are you still in their line up?
,,No, I quitted one year ago.’’

I stated in my review the Taste album being more appealing to me, and a lot more diverse and consistent in terms of song writing, rather than the Art Nation albums. With AN I frequently reach for the skip button… That being said I lean on the assumption of this hailing from the musical compromises subject to you being in the team of musicians?
,,I understand what you mean. There were a lot of compromises, but the goal with AN was to attract as many listeners as possible. So that’s indeed why there’s more diversity between the songs.’’ 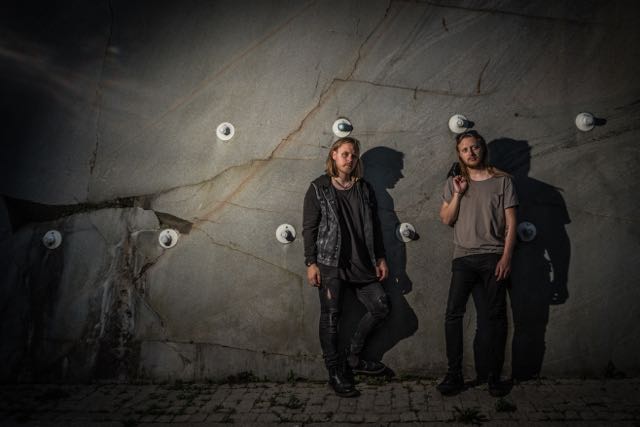 Taste draws from the melodic heydays and seems to pay tribute to the AOR and pomp classics on the debut, correct?
,,Absolutely correct!’’

`Moral Decay’ still features the ingredients from the debut, consisting of pomp and AOR elements, but it also reveals a sharper edge with more bold hard rock tracks. Can you explain this move?
,,I don’t know, really. The only real difference this time is the lyrics. With a bit more serious subjects and first hand experiences.’’

How is work divided writing and crafting songs between Felix and yourself?
,,We write the foundations by ourselves and we record demos from that on my computer. We arrange it together. But I would say that Felix writes more of the music and I write the lyrics and vocal melodies.’’

A lot of compromises, or do you have a more natural evolution when writing and creating?
,,We compromise but we easily agree on almost everything with Taste. That’s how it got started in the first place.’’

You’re also working as a producer. How does this affect your skills as a musician when composing and writing? Do you have the last call?
,,It makes my song writing so much easier, and composing the arrangements too. Felix agrees most of the time when I change certain sections in his arrangements but I don’t have a last call.’’

Never any tensions when the dividing line isn’t that obvious, or when thinking doesn’t align? [I personally would not be able to work nor create together with my brother at all.]
,,[Laughing] I remember working on the first album and I criticised one of Felix’s songs. He said that I could do whatever I wanted with it. He didn’t care. Then he left and we didn’t speak with another for a whole week. He eventually got over it and it became a great song.” [Laughing]

No blood was drawn during creation of this album?
,,Our mom expected more!” [smiling]

The songs have matured but still ooze passion for the 80’s and 90’s bands. What are your main influences in music?
,,There’s so many great bands from that era. The influences however are still the same. But the thing is; we both pick the best part of every band and then fuse that together as Taste. Our absolute favourite artists are something totally different and I guess that adds to our sound as well. My biggest influence is Blind Guardian and Felix is a big fan of both Iron Maiden and Misfits.’’

Now that catches me by surprise as I expected to hear mentioned melodic bands…
Never afraid of the songs being dated or predictable? How do you surpass the possibility?
,,I think the secret is to not care to much of other peoples opinions. We make music that we want to listen to. We follow our passion for Melodic Rock and AOR. And we would never do something that is not right for Taste. Like if we wanted to make modern rock or more pop songs, it would not be with this band.’’

,,We may mature and develop, but we won’t leave the 80s anytime soon!”-Christoffer Borg 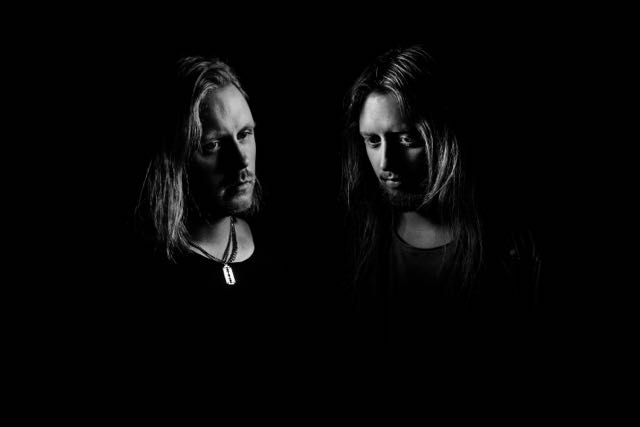 The Scandinavian scene has always brought forward a wide array of melodic and AOR bands in the past and present. What’s your take on this flourishing AOR scene in the Nordic countries?
,,I think it is absolutely fantastic to have so many successful and talented bands from the north. Lots of opportunities for cooperations.

’’What’s the initial goal for Taste and how do you see the future for the band?
,,Our goal now is to form a “real” band and get out on the road. But we are not in a hurry. We will wait for the right people to join the band.’’

What are your personal goals and targets as a composer and musician/producer?
,,I don’t know exactly. It would be fun to do more mixing for acts in the future. That is something I’m really passionate about.’’

Gene Simmons of KISS stated the rock scene to be in comatose situation. How do you look at the current scene?
,,It is a lot of hard work. Lots of competition out there. But as you stated earlier: there are a lot of new bands and they all sound very good. I guess it’s the listener’s market nowadays. With everything free on the internet and all..’’

With more and more bands also gripping back to the heydays of melodic rock and arena rock, where do you stand with Taste?
,,We do what we always do. We pick what we like and combine it, blend it together in a package dated to the 80’s. We may mature and develop, but we won’t leave the 80s anytime soon!’’ [smiling]

When I mentioned the sincere passion for classic AOR and melodic rock your album oozes, you mailed me briefly to address the fact that not everyone understands this. Please explain what others might miss and why you responded so fast to my statement….
,,I get very happy when somebody sees the passion in our music. It means the hard work pays off. A lot of music these days sounds too sterile and over edited. Real passion is recording until it is perfect instead of recording until it is good enough, and then edit the crap out of it.’’ 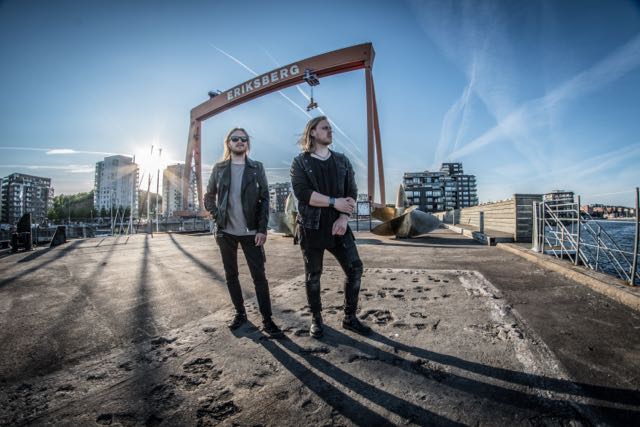 Does it have anything to do with journalists or managers being prejudice towards bands in the genre?
,,Sometimes a journalist can be like condescending and say that our sound is dated. They obviously don’t understand what we are doing. And it happens all the time, believe me.’’

I believe the genre is pretty predictable in general. Melodic rock as well as hard rock always has this ghost haunting them of certain sections of tracks “sounding like”. This brings me back to a previous question as I do think this is [only remotely] present in your music, but somehow you manage to have a recognition being surpassed. How do you manage to shake off the ghost of musical past and manage to give it so much of your own identity?
,,I would say practise. We both write songs and evolve musically. I try to do song writing differently every time, just to prevent myself from doing the same thing over and over again. Like incorporating something new (for me) in every song, or write on a different instrument. And of course, not every song is a hit single, or even a good one at all. Just rinse and repeat!’’

Anything you would like to add?
,,Thank you for taking the time to asking me these questions. And a big hug to everyone listening to our music!’’

With `Human Day’ in their folder, TASTE most surely heads to run point in melodic rock. Though not many know the band yet, it is just a matter of time for the Borg brothers to assemble a band around them and rise. The music is as captivating as Mr. Borg, who is clearly a natural and honest musician and producer. Wise and smart, sincere by all means; exactly what music is all about…