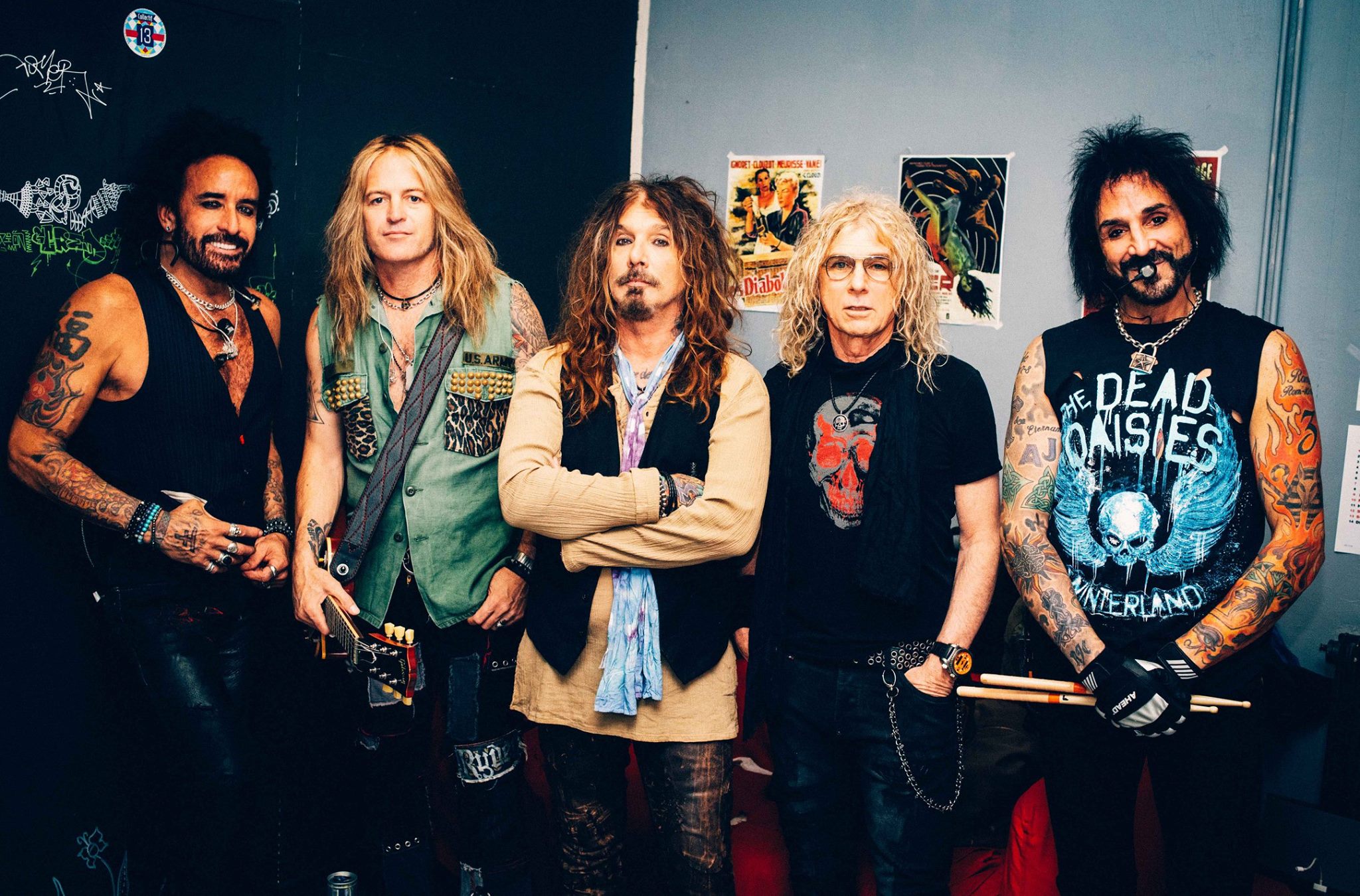 Earlier that day, during the Daisyland acoustic set, in front of fifty fans, singer John Corabi announced him as ‘the quiet one’. Later that night, during the regular show, Corabi called him ‘the man with the plan’. But…is he really quiet and did he have a plan when he started The Dead Daisies 5 years ago? HeadBangers LifeStyle’s Ron Willemsen tried to find out when he spoke with guitarist, founder, businessman but above all music fan, David Lowy.

,,Part of the ethos in this band is being fan friendly’’ -David Lowy 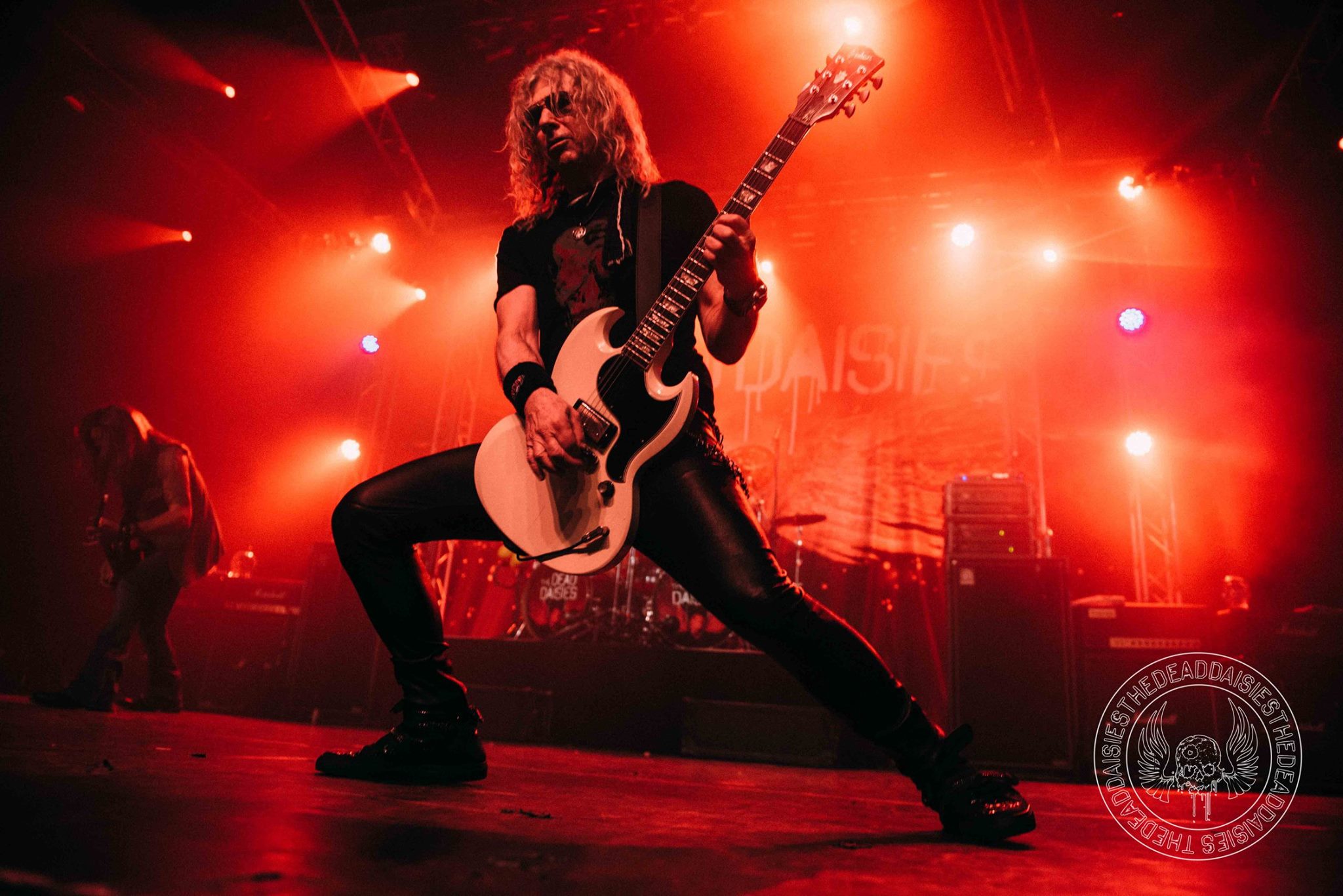 David, since 2013 you released an album a year, you have toured with the biggest names like Kiss and Def Leppard, you’ve played at all the major festivals, arenas and clubs. Was it everything you expected?
,,I didn’t really think about it that way. It wasn’t a premeditated plan.’’

But you are also a businessman and as such you must be used to working with plans?
,,Well, that isn’t really the case. When you work on a business for a long period of time sure you have plans along the way, but nobody makes the plan 20 years ago and says: ‘that was my plan that came out’. You got something good and you keep going for it, you make changes when required and when you look back it looks like you have had a brilliant plan. But you’ll find that people who built big businesses never had a big plan, it just happened along the way.’’

,,I’m lucky to have some very talented people around me.’’ -David Lowy

Is it that you need a good idea and a lot of luck?
,,A lot of luck. Luck has to be a core competency in life. Warren Buffett [American business man and investor] said: ‘you have to be a member of the lucky sperm club’. Luck plays a huge role in everything. I know a lot of people that work very, very hard and they don’t have the luck to really make it. But you can’t make it without very hard work and you need some talent. I’m lucky to have some very talented people around me.’’ 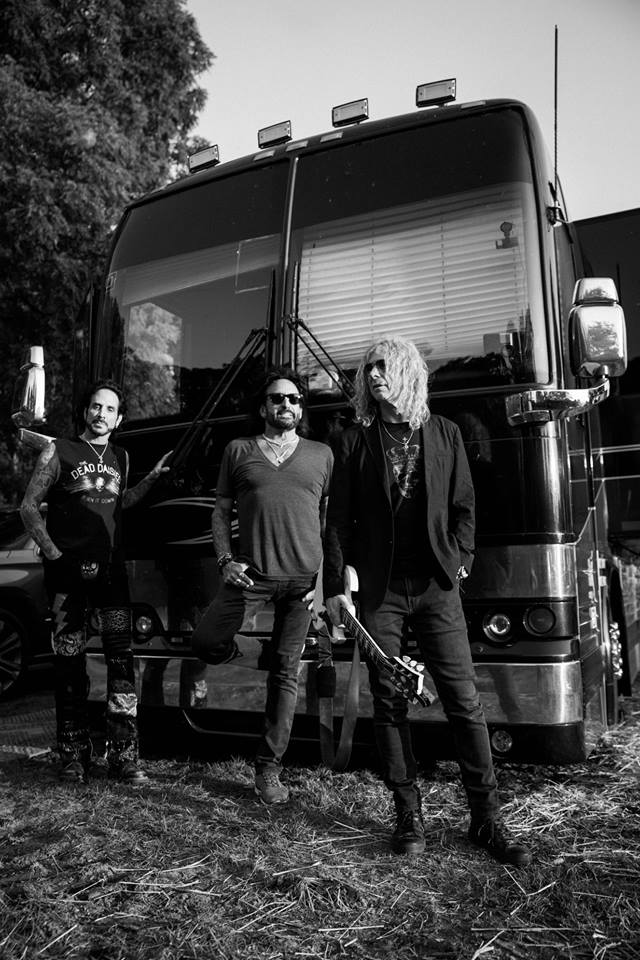 Was it hard to find these famous musicians?
,,Well, I didn’t really look for them. It just sort of happened. When I started the Daisies I was also playing in another band [Diva Demolition], actually a girl band recruiting a couple of guys. We opened for Kiss, Mötley Crüe and Thin Lizzy in Australia. This is how I met Marco [Mendoza] who was playing in Thin Lizzy at that time and we became friends. I wanted to take the band outside of Australia and he loved to do it. The drummer at the time, Charley Drayton, who played with Keith Richards’ X-pensive Winos and was also in Cold Chisel, knew guitarist Richard Fortus, who was with Guns N’ Roses in Australia. He had 3 weeks off and we had one gig to do so Charley asked Richard if he would do it and he did. With Richard came Dizzy [Reed] as well. So, if you keep working at it, try hard, get a bit lucky, things can happen.’’

Is the fact that you are constantly touring and posting a lot on social media the secret of your success?
,,You have to be doing those things, how else do people see you today? It’s never been easier to produce music, you can do it in your living room for a few thousand dollars if you really want to. While it’s more accessible, there are no boundaries to get it out anymore because of the technology and the Internet. The difficulty is getting noticed and the only way to get noticed is to tour so we tour as much as we can; but we still like to keep it fresh. One of the things about this band is everybody is doing other things besides the Daisies and that’s what keeps it fresh and interesting. It’s never boring, always a challenge. You have got to market it. We love music and it is a very creative endeavour, we love to perform and create but at the end of the day it has got to be promoted, so we got to be up there.’’

Originally The Dead Daisies was called a collective, has it now become a band?
,,It IS a band but as I said, we are not a bunch of 20 year old’s, or even 30 year old’s. When you get together as teenagers, each guy puts in 500 bucks but it’s not like that. Everybody is very accomplished at everything they do and it is just the nature of doing something. They all have the freedom to do other things as well because that’s what gives this creativity. If you do the same thing over and over again, it’s not stimulating for them and not creative, so that means that not everybody is available at all time. Like last year with Brian Tichy; the schedule wasn’t clear for a while and Brian wanted to commit to some other things. That happens from time to time.’’ 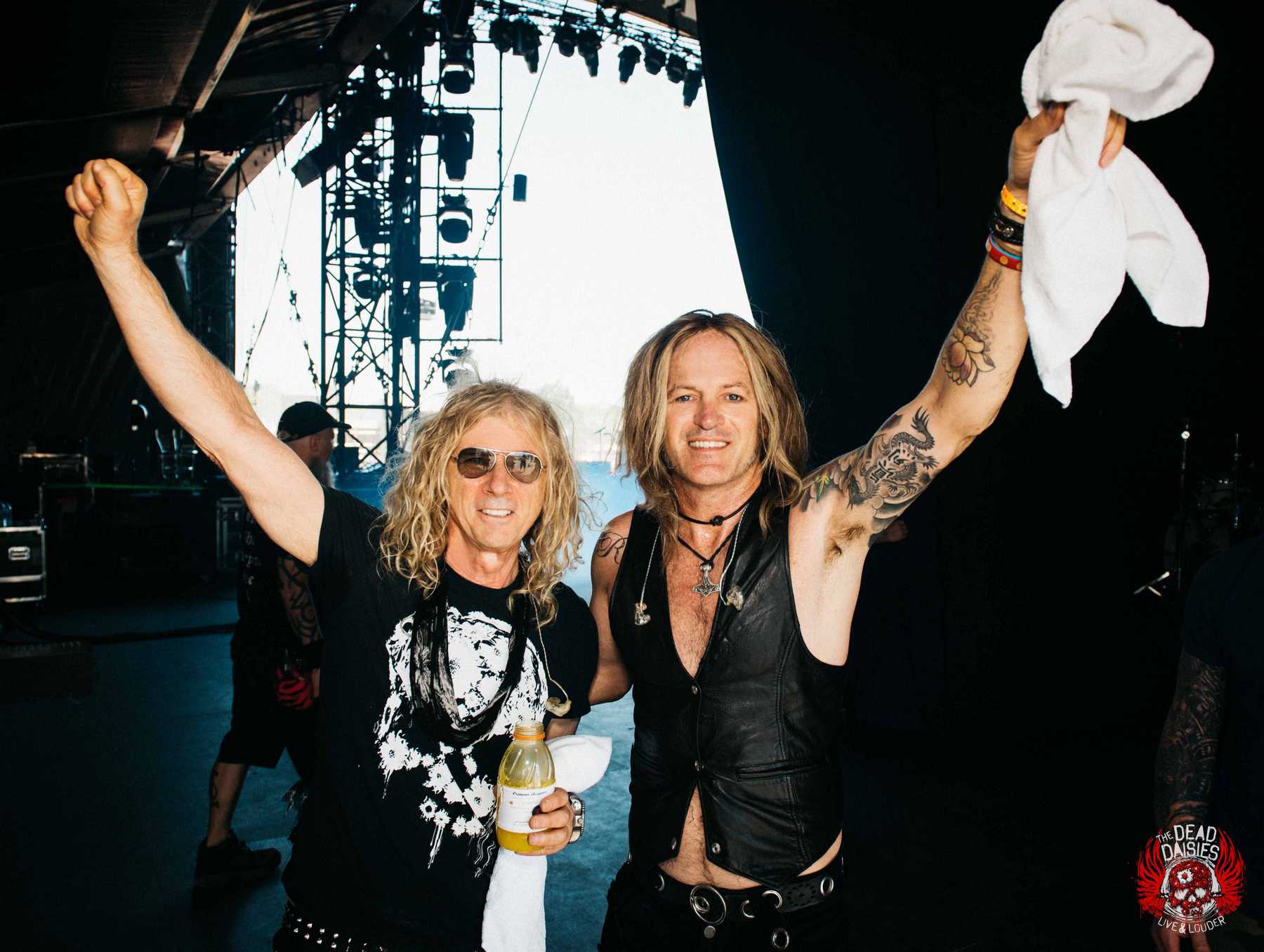 The Dead Daisies was your idea. How did you pick the musicians?
,,They pretty much picked each other, haha. Deen [Castronovo] plays with Doug and Marco, and Doug played with Marco, it’s actually a small community at the end of the day.’’

,,The thing about this band is that the whole is so much greater than the sum of the parts.” -David Lowy

Characterize the members of the band in one word or sentence.
John Corabi
,,A very talented singer, song writer and performer and he is a character with a great sense of humour.’’

Marco Mendoza
,,A fabulous bass player, I’ve played with quite a lot of bass players and Marco is up with the best of them and he is a lovely human being.’’

Doug Aldrich
,,Doug is sweet and again very talented. Again, each of these guys is very talented. He’s patient. Sometimes they have to be patient with me because I haven’t done this my whole life. It’s not been my whole career and it is not easy to keep up with them the whole time. He shows me things, he’s patient with me and works with me simplifying things if they are complex.’’
I interviewed Doug when he was just in the band and asked him if he pushed you to do some more solos and he said he did.
,,He does, I do the odd solo but he is much better at it than me, simple as that. I’m good at some things and everybody is good at things in the band. I rather listen to him than me struggling through it. I like playing rhythm guitar. If you think about AC/DC, ever seen Malcolm Young do a solo. He was the midfielder, the captain.’’

Deen Castronovo
,,He is an awesome drummer, a great guy and fantastic addition to the band. The thing about this band is that the whole is so much greater than the sum of the parts. It’s a team and we are all team players.’’ 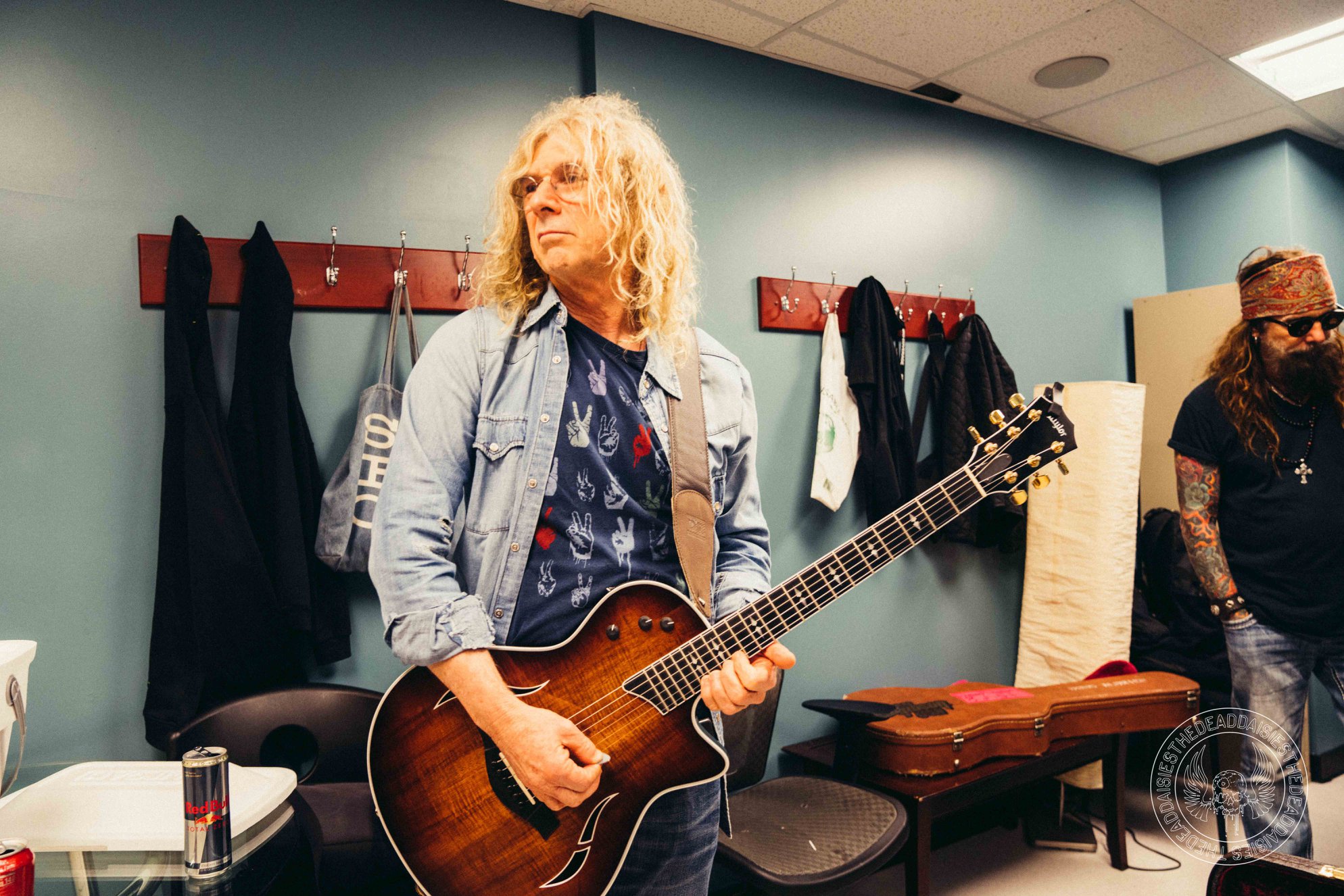 The band is still very approachable.
,,Yeah, why not? I think that is the right way to do it. I think every fan is a VIP, not just the ones who paid to be VIP’s. If they are prepared to line up outside in the cold for hours to be with the first 50 people to come in, you shouldn’t charge them for that. We appreciate it. We are also music fans, so we know what it is like to be a fan. Part of the ethos in this band is being fan friendly, we are also fans, we are not better than them, it’s a journey and we are in it together, that’s how I think about it.’’

Big bands, but even small bands, charge their fans for meet & greets. What is your opinion about that?
,,You know, I’d like to do it this way. From a business sense the music business today has a very low margin, it is high risk business and you actually want the reverse. You want high margin, low risk but that’s not the music business and maybe this is the only way they can get themselves on the road. You need revenues, you have to eat, rent the van, I don’t think there is anything wrong with it, it’s just not what we do. We do it differently, not say better or worse. I can understand why bands do it.’’

What is your ultimate goal with the Dead Daisies?
,,I don’t think about it that way, no. I just want to create good music, we love to play good music, love performing.’’

What is your highlight with The Dead Daisies so far?
,,Every gig is a highlight, okay. Even the ones that are not good, because not every gig is good. But every show means something. When we played with a sixty-piece orchestra at the Woodstock festival in Poland, that was an awesome experience, but also last night’s gig was fantastic.’’ 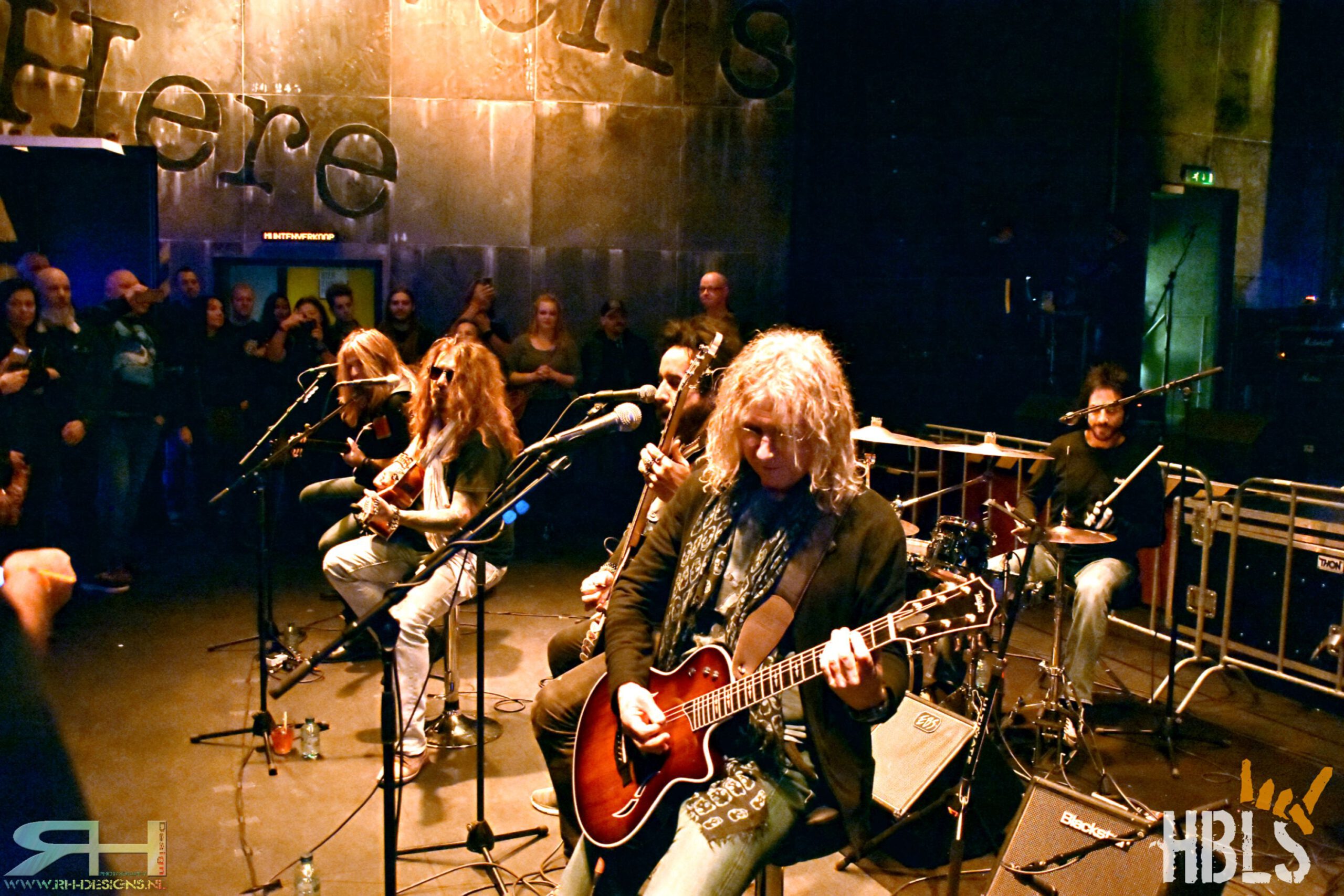 Do you personally need a different approach for a club show and an arena gig?
,,You know, we are not playing arenas ourselves, we played some support. It’s a different type of show with, obvious, a bigger stage. When you play support you don’t have control. When you’re the headliner you got control, if not you’re a guest. It’s not your show, sometimes the technical aspects of it can be difficult but you have to deal with that.’’

,,You can’t do the same thing over and over.” -David Lowy

What advice would you give to kids who want to become a musician as well?
,,Haha, practice, practice, practice. I played piano as a child, picked up the bass guitar as a teenager for a couple of years then stopped but started again some 15 years ago. So practice, stick with it, get a good teacher if you can, if you can’t learn from stuff on YouTube. You better be passionate about it because you got to go through some of the barriers. If that’s what you want to do, you have to do it. It won’t be an easy life but what’s easy?’’

Is there a new album in the making?
,,We toured almost the whole year and my head is full so I have to sit back first. Like you said, we made 4 studio albums, 1 live album, and an EP, so now it’s time to figure out what’s the best way for the Daisies to continue. Sure, we will do another album and tour, I just need to recalibrate. You can’t do the same thing over and over, that’s why we do this acoustic thing in the middle of the set and do some covers. We keep it fresh and interesting, not only for the fans but also for ourselves.’’
—
Follow THE DEAD DAISIES on Facebook and visit their Website here