Danish guitarists Hank Shermann and Michael Denner are well known for being the six-string force of the legendary metal band Mercyful Fate. Especially the first two albums,`Melissa’ (1983) and`Don’t Break The Oath’ (1984) are considered real classics and had a huge impact on the rise of heavy metal. After going separate ways for some time both musicians recently found their way back, reunited under the official name Denner/Shermann and teamed up with drummer Snowy Shaw (Mercyful Fate, King Diamond), bass player Marc Grabowski (Demonica) and vocalist Sean Peck (Cage/Death Dealer) to form a real band. The EP `Satan’s Tomb’ (out October 2nd 2015) is the first introduction and a real feast for anyone who has a huge passion for (old school) metal. HBLS talks with Hank Shermann about this new adventure, some good old memories and future plans. 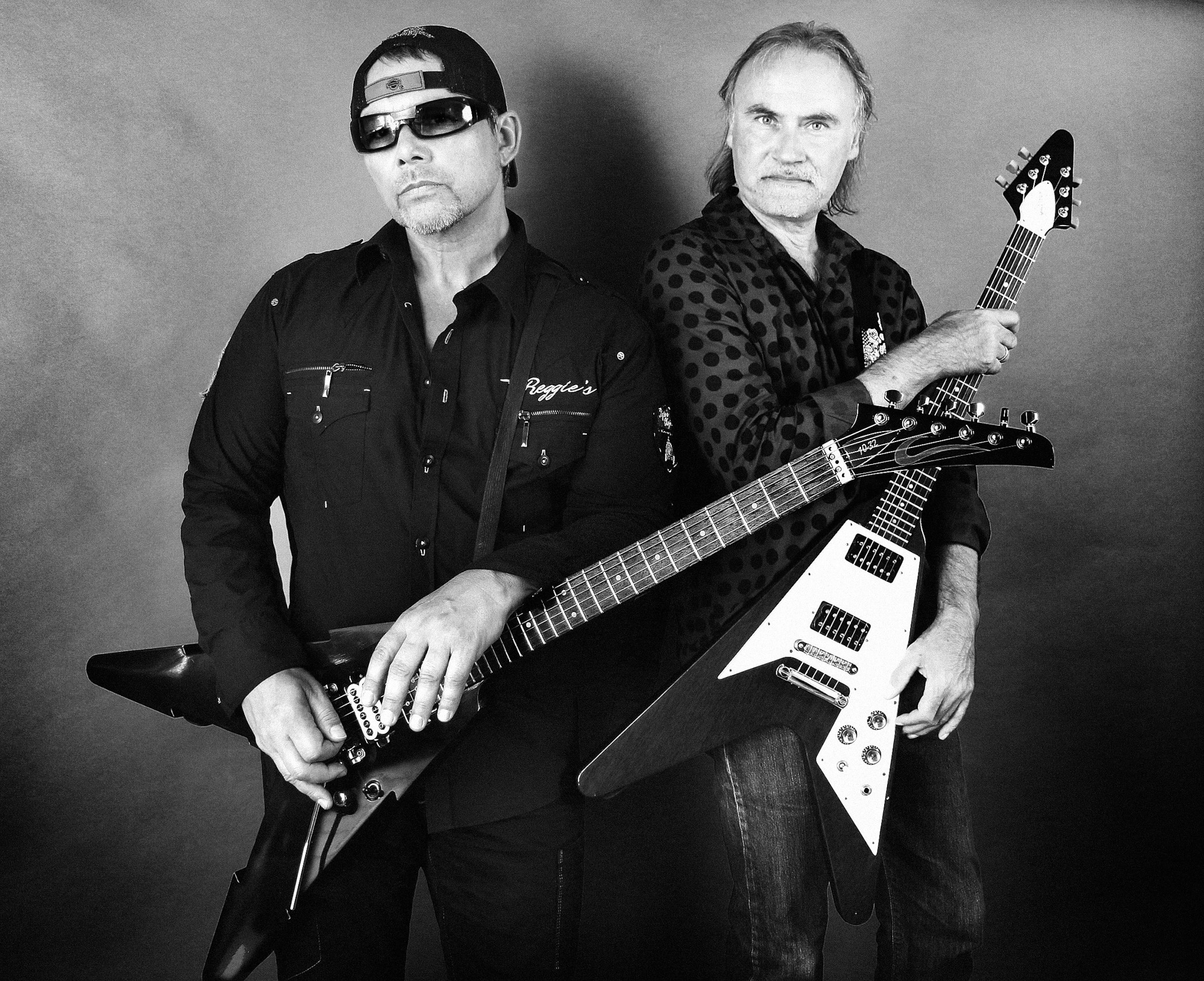 What triggered you to start Denner/Shermann?
,,During 2012 I have been touring as a hired musician with Volbeat. It was a very successful experience for me, being part of this worldwide known band, playing in big arenas. When the tour was finished I sat home thinking: `now what?’ After being out on the road, travelling in tour buses, flying around to Brazil, Mexico, United States, Europe and playing the Wacken Open Air festival in Germany, it suddenly felt really empty, like back to square one. I had no band because earlier I disbanded Demonica and after a while I concluded it was time for my first solo album. I came up with the name Shermann Tank and some German guy made the coolest logo I have ever seen in a long time. I asked singer and bass player Marc Grabowski to join me and we wrote about seven songs together. But at some point Shermann Tank faded away because I started to make videos with Michael Denner for the thirty-year anniversary of the Mercyful Fate albums `Melissa’ and `Don’t Break The Oath’. We had so much fun doing that, playing the old guitar riffs together. Slowly we realized it has more potential and impact if we do something together instead of solo stuff. After Mercyful Fate we have flirted together in some previous bands, but maybe it was the wrong time, maybe the vocalist wasn’t good enough, who knows? Now the time feels right. Eighties bands like Slayer, Iron Maiden, Judas Priest, Megadeth and even Motörhead and AC/DC are still successful and also King Diamond is doing well with his comeback. The name Denner/Shermann seemed logic and again this German guy came up with the logo and suddenly we were a band. We asked Marc to be our bass player and Snowy Shaw for drums. It was all over Facebook and Blabbermouth and we didn’t even got the change do discuss what kind of cool, permanent singer we want because right away I got a message from the American singer Sean Peck, being very much interested in the front position. We bounced some ideas and he sounded awesome!’’

Why releasing an EP and not a full-length album?
,,We decided that from the beginning, just an EP with four tracks. We are totally starting from scratch, like we did with Mercyful Fate. The first two songs, ,,Satans Tomb’’ and ,,War Witch’’, are pretty basic and more mainstream. With the last two songs ,,New Gods’’ and ,,Seven Skull’’ I tried to put more variety, depth and layers into the music.’’ 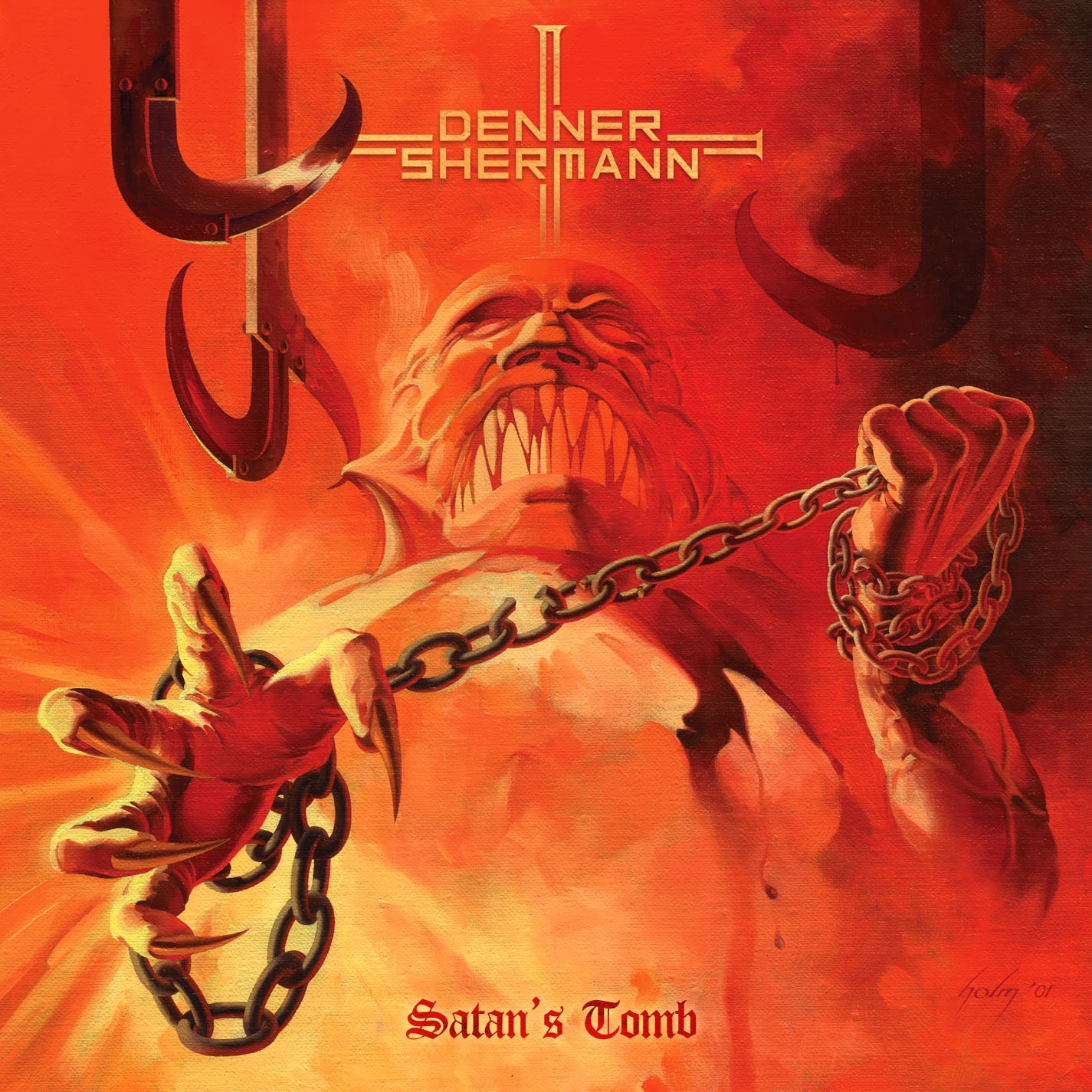 The EP obvious recalls Mercyful Fate.
,,It is almost inevitable not to sound like Mercyful Fate since I wrote the songs and Michael is the other guitarist. There is this blend of early Judas Priest and Mercyful Fate in the music, but for us it is a matter of just staying true to the music we like the most, all our inspirations from the seventies. As guitarists we are very much like we were in the early days only now more experienced and trying to perfect our style of playing. We didn’t progress into guitar players who can now do all the technical complicated scales up and down. Honestly I am not even interested in that. With Denner/Shermann we are not going deep into the occult and that evil vibe but of course there are some riffs here and there that have all the ingredients. King’s singing technique back then with the talking, screaming and all, probably made it sound a little darker. Also Sean has grown up with Mercyful Fate and King Diamond but we told him not to imitate King, we want him just to be himself. Sean reaches high-pitched notes, recalls all our favourite singers from the eighties, like Rob Halford, Geoff Tate, Bruce Dickinson but does it in his own way. His tone has a smooth vibe and sound which makes Sean recognizable.’’

Remarkable is the fact Thomas Holm, the same guy who is responsible for the artwork of `Melissa’ and `Don’t Break The Oath’, did the artwork for `Satan’s Tomb’.
,,Yes and that is really cool and kind of fun, seen from a fan’s perspective. Thomas made this painting actually more then ten years ago. Before I had this whole Shermann Tank idea, an American guy contacted me saying he has this original canvas and thought I might be interested in buying it. I really like the vibe and the style of it and decided it is a good investment and bought it, also thinking maybe somewhere in the future it would come in handy. And that day has come already. Sean didn’t see this painting when he was writing the lyrics and in the end everything fitted perfectly.’’

Can we expect a full-length album soon?
,,I can reveal we have about seven more new songs almost completed and I think in a month or two we will have a complete album. Again I do all the music and Sean writes the lyrics. With the new songs I try some different approaches, different layers and they sound a bit more progressive. It is more heavy, harder and tougher in the expression but also more melodic. I am hoping for a release in May or June 2016. I am sure we are going to play live during spring 2016 and unreleased songs will be on the set list as well as some Mercyful Fate songs.’’

What do you miss the most about your time with Mercyful Fate?
,,Those first time experiences together, we were in our early twenties and they are sticking as highlights of my career. Going to Holland for the first time, driving in a Volkswagen with the cabinets on top of the roof to play six shows. Our first tour in the United States. All the crazy stuff that happened and all the good memories is what I miss the most. And our friendship. We had so much fun and liked to be together as persons. We loved it so much we even rehearsed six days a week together. It is really tough to try and experience that feeling again, even now with Denner/Shermann. The way I compose these days is a very isolated process, just me with my guitar and my computer.’’

Did you ever think Mercyful Fate would become an inspiration for other bands and musicians?
,,No not at all. I am a big Judas Priest fan and we all were into Deep Purple, Uriah Heep, Black Sabbath and Iron Maiden. A lot of death and black metal bands really worship Mercyful Fate even though our music is half as dangerous as some of these bands. Our songwriting was actually pretty straightforward and honestly I think it is all about King’s lyrics and his make-up. A few years ago I was introduced to the singer of Ghost who happen to be a big Mercyful Fate fan too. I really respect this band because here you have a very good example of good an intriguing songwriting. Also the band name and image are pretty clever. Of course we are honoured and we feel grateful for inspiring others to play an instrument or start a band. It’s really cool actually because that is how I started, being a big fan of Kiss. One day I said: ,,I am going to play like Ace Frehley!’’ and then I was just very focused getting my first guitar back in the seventies. I play guitar almost every day, practising my homemade scales just to keep up with timing, but I am more like the composer type. I look at it as a challenge, to find some cool riffs and put it all together with cool parts around it. I definitely want to keep that drive. As a composer I really love Uli Jon Roth, he is from out of this world and so serious in the way he compose his solos. I am not a schooled musician and I don’t care too much about what scale I am playing or the technical name of it. That would only hinder me. I am very free in my mind during composing. All the riffing and crazy ideas are coming from my brain, but the foundation, the framework of my guitar style totally comes from how Judas Priest made their seventies records.’’ 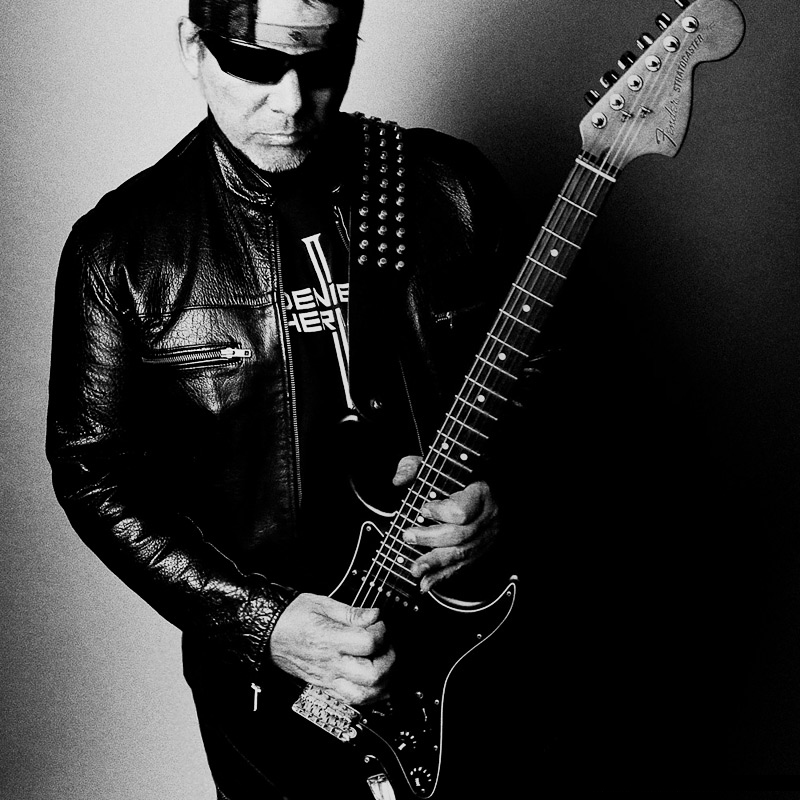 Are there plans for a Mercyful Fate original line-up reunion?
,,It could happen but it is all about timing. King had some hard times in his live regarding his health. He had back problems and a triple bypass. Considering all that plus he will turn sixty next year he is doing a really great job and better then ever with his career, without making a record since 2006. In 2016 they will even do more shows in Europe and then they will start recording the next King Diamond album. When all that is done I can imagine a reunion for some special shows and maybe a last album. That should be possible.’’

Do you have other special interests besides music?
,,I am the operating guy in Denner/Shermann and some other projects. It is only possible because I don’t have a wife, children and dogs. I have my time and freedom. Since fifteen years I do all the websites myself. I run Pro Tools for ten years now, doing all the Photoshop and knowing the creative software totally in and out. I don’t consider myself a nerd; I would regard myself having an ecstatic taste in everything I do. I am a very creative person and very much into design. I am into architecture, into cool cars from the sixties, into cool riffs. Every day all this is still challenging me. When I want to relax I go on the computer looking for interesting, old digital postcards. Let’s say a scenery from a Dutch city, for instance Eindhoven 1962. Then you would see the view of some part of the city with the cars and people walking with children. I enjoy this travelling back in time and I like to analyse the fashion styles, cars and all; it is a little hobby of mine. I am actually totally into Holland, the living style, the houses and people. It reminds me of the sixties. If you really want to get freaked, just check the website Shorpy Here you find thousands of old photos, portraits images from around 1912 till 1950 but so sharp and with a high definition, as if they were taken with a new IPhone. So crystal clear, it is almost scary.’’