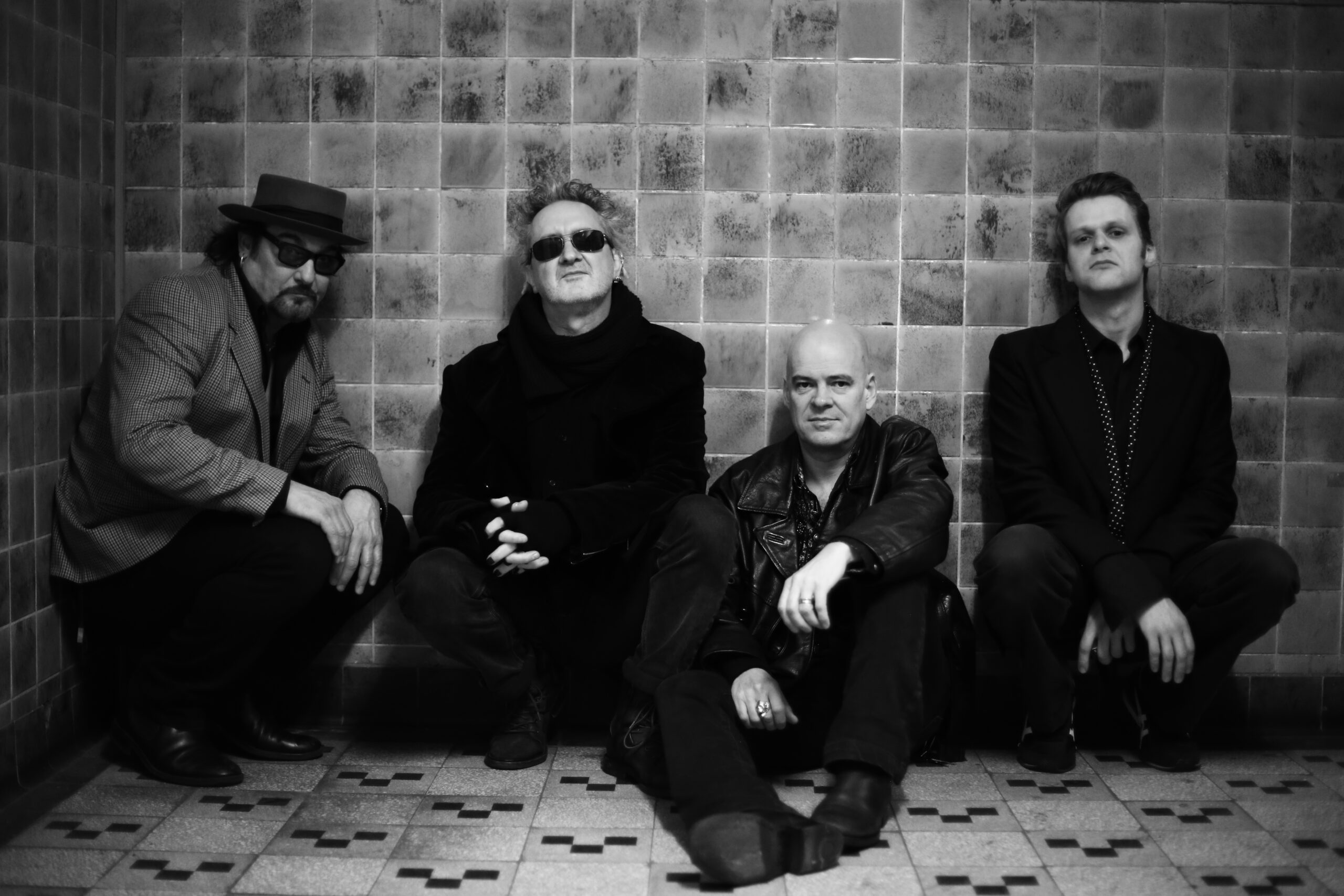 It was during the turbulent mid eighties when guitarist/singer Wayne Hussey and bass player Craig Adams left the successful British rock band The Sisters Of Mercy to form their own band The Mission. After releasing the debut album `God’s Own Medicine’ in 1986, the gothic rock community would never be the same, because The Mission displayed a unique, recognizable sound that captured a lot of sensual sexiness in the vocals and mystic vibes in the guitar melodies, all wrapped in catchy melodies. Wayne appeared as the magnetic, enchanting frontman and The Mission ended up in a stormy career. It became a wild ride of sex, drugs and rock ‘n roll, split ups and reunions and therefor it is almost a miracle the band survived this roller-coaster ride and is now celebrating its 30-year anniversary. HeadBangers LifeStyle talked to guitarist Simon Hinkler about this milestone, the early days, the fans and the brand new studio album `Another Fall From Grace’. 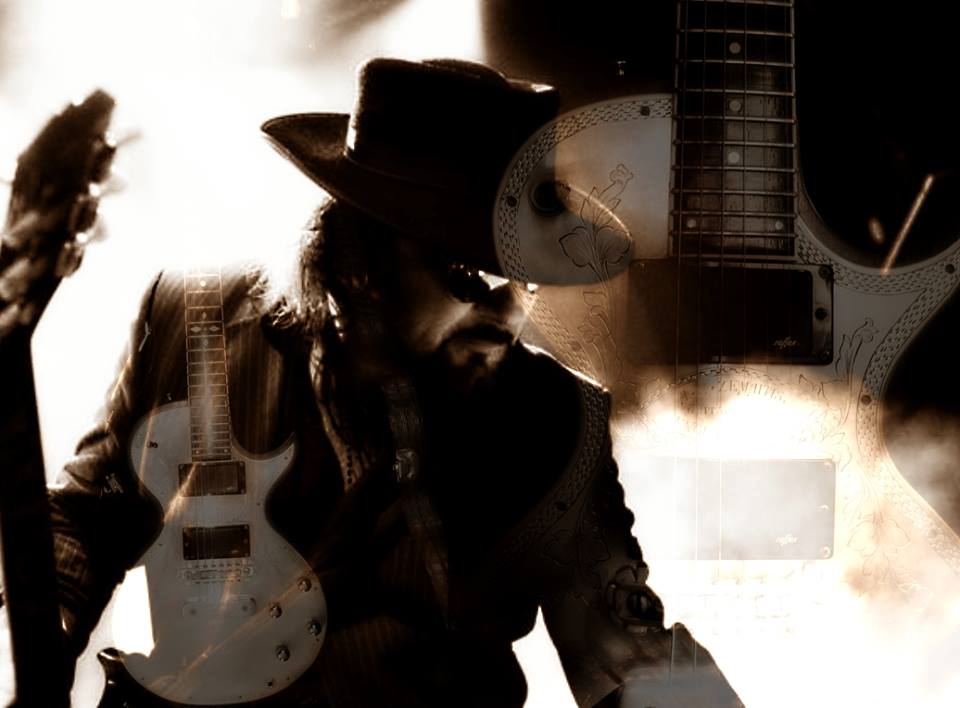 HAPPY ANNIVERSARY
Congratulations with celebrating the 30-year anniversary of The Mission.
,,I know, it is amazing! In the early days we always used to say `I don’t expect any of it and it depends if I’m gonna make it past 30’. Well, here we are, we made it past 30 years old and now it is 30 years The Mission. It is nothing else than a big celebration that we are all still alive, you know. Yeah, there is still life in the old dog yet’.’’

How do you look back on the early days?
,,It was incredible. It was really insane, like a Mickey Mouse world. It all happened so quickly for the band. That first period from the beginning of the band until when I left in 1990 is only 5 years, but so much happened in those 5 years. We were the proverbial overnight success. We just came out of nowhere and got successful very, very quickly. We toured constantly; we made four really good albums. It was just nonstop. I think I barely spent more than a week at home in those 5 years. Nowadays we all have a wife and a family, but it is great to go out and do it again. It really is. I have been away from The Mission for 18 years and I had a completely different life. Then the question came `Shall we put the band back together and go out and celebrating our 25th anniversary?’ I had to decide if I wanted to start this whole life again, but I felt like `O yeah! Let’s do that!’ Everybody in the band wanted it and there were enough people out there who wanted to see us doing it. So we did and we decided to carry on because we had such a good time all being back together again. And I am still sounding good, which is amazing I suppose [laughing]. The fact so many older bands reform and play again is because it is a natural progression in your life. You leave the craziness for a while, start having a family and you do something else in life. But eventually you think `aaah I want to do that again’. The fact The Mission is still around, making albums and doing live shows is important to us and to the fans.’’

How do you celebrate this milestone?
,,By going on tour and this will be the longest tour we have ever done since the band got back together for the 25th anniversary, 5 years ago. We have toured every year since then but it was two weeks here and three weeks there. Now we will be on the road for about 7 weeks in a row. It’s gonna be hard, but that’s what you do when you are a rock band, isn’t it?’’

Are you looking forward to get back on the road?
,,I am always the same. When a tour is heading, I am thinking `O God, this is going to be exhausting. I’m going to be away from home so long.’ But as soon as we get together, because then I haven’t seen the guys for months and months, it will all be fine and we have a good time. To me there is nothing quite like it, to get up on the stage and playing with this band, because we do make a fantastic noise live. There is a really good chemistry, the sound, the visions and we’ve got this thing that sounds like nothing else really. It is a great thing to be a part of.’’

Will it still be sex, drugs and rock ‘n roll on the road, or are you all take it more easy these days?
,,A bit easier, I hope [laughing]. It would be physically impossible do it the way I did when I was in my twenties. So not so much the sex, because we are married people now, but the rest of it? Yeah. You know, a bit, a lot, depending on the day.’’

What gives you the adrenaline rush on stage?
,,It is the very thing itself: When you step upon the stage and you hit your first chord, start playing the first song and everybody starts jumping around. People go crazy and you know you are in for a good time. That is something you can’t really replace with anything else. It is a unique and intense feeling that happens almost every time we play. It has become a tradition of mine to do a day-to-day tour blog on my Facebook page, so I will also do it for this tour. It also gives me something to do all these hours in the tour bus.’’

What can the fans expect from this tour’s set list?
,,I have been given a list of 43 songs to learn for this tour. What always happens is there are certain songs that you have to play, like ,,Tower Of Strength’’, ,,Serpent’s Kiss’’, ,,Severina’’, ,,Deliverance’’ otherwise you are disappointing everybody. Besides that they are a lot of fun to play. The rest of the playlist we mixing up with old tracks and new tracks and a few songs we change around from day to day. That also keeps Wayne interested and we don’t want to get too lazy.’’ 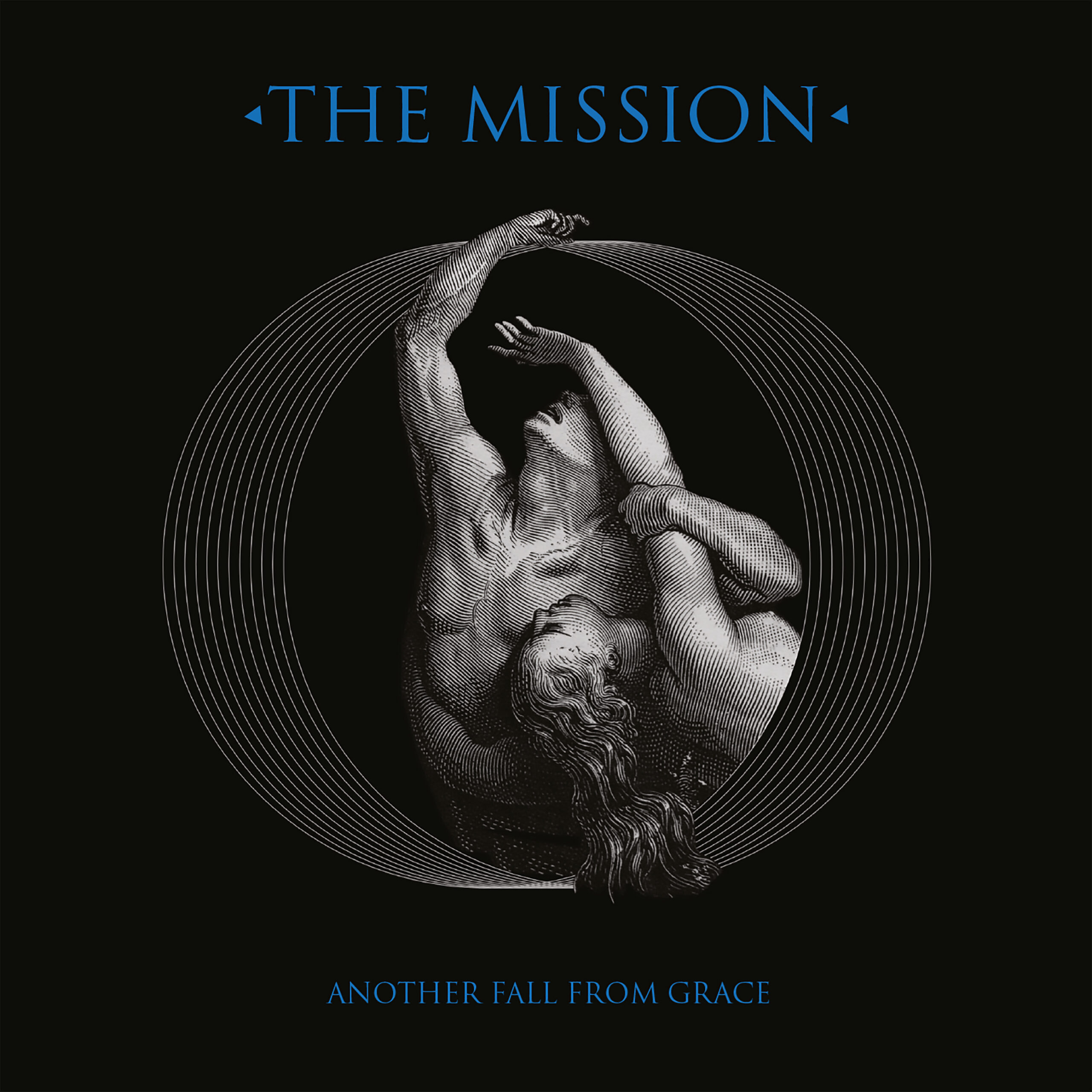 `ANOTHER FALL FROM GRACE’: THE NEW CD
The Mission also releases a new CD on 30th September called `Another Fall From Grace’. Singer Wayne Hussey officially stated it is the lost link between The Sisters Of Mercy `First And Last And Always’ and The Mission’s `God’s Own Medicine’. Do you agree?
,,Wayne always has been the main songwriter. He works on new songs first, and then the band steps in. When it comes down to a statement like that, that is his personal feeling about it. And that is fine. We recorded our former album `The Brightest Light’ in a completely different way. The plan was to do something really spontaneous in a rehearsing and recording timeframe of 4 weeks, and just see what comes out of it. I think a lot of good songs happened there, but the one thing that was missing was The Mission sound, like the guitar sound for example. We were happy with that album but soon after we all realized with a next album we needed to get back to our sound again. With our first 3 albums we came up with our own sound and that is why people liked us in the first place. It is important to have that sound back and that is how Wayne approached the writing process of the new album and yeah some of the songs are a bit darker than we did on previous albums. I am glad we are back to the 1986 sound. It is what I enjoy doing.’’

How different was the recording process of `Another Fall From Grace’?
,,We all live in different countries at the moment and for the first time we all recorded our parts in our own studio, individually. After Wayne came up with the core of the songs, files got send around the world. It is very time consuming actually and that is the worst thing about doing it like this. While I am working on a song here, Wayne is probably sleeping in Brazil. You don’t have that instantaneous thing of discussing what you do and work on it together. That makes it quite a long process. I am glad we are done with it anyway.’’ 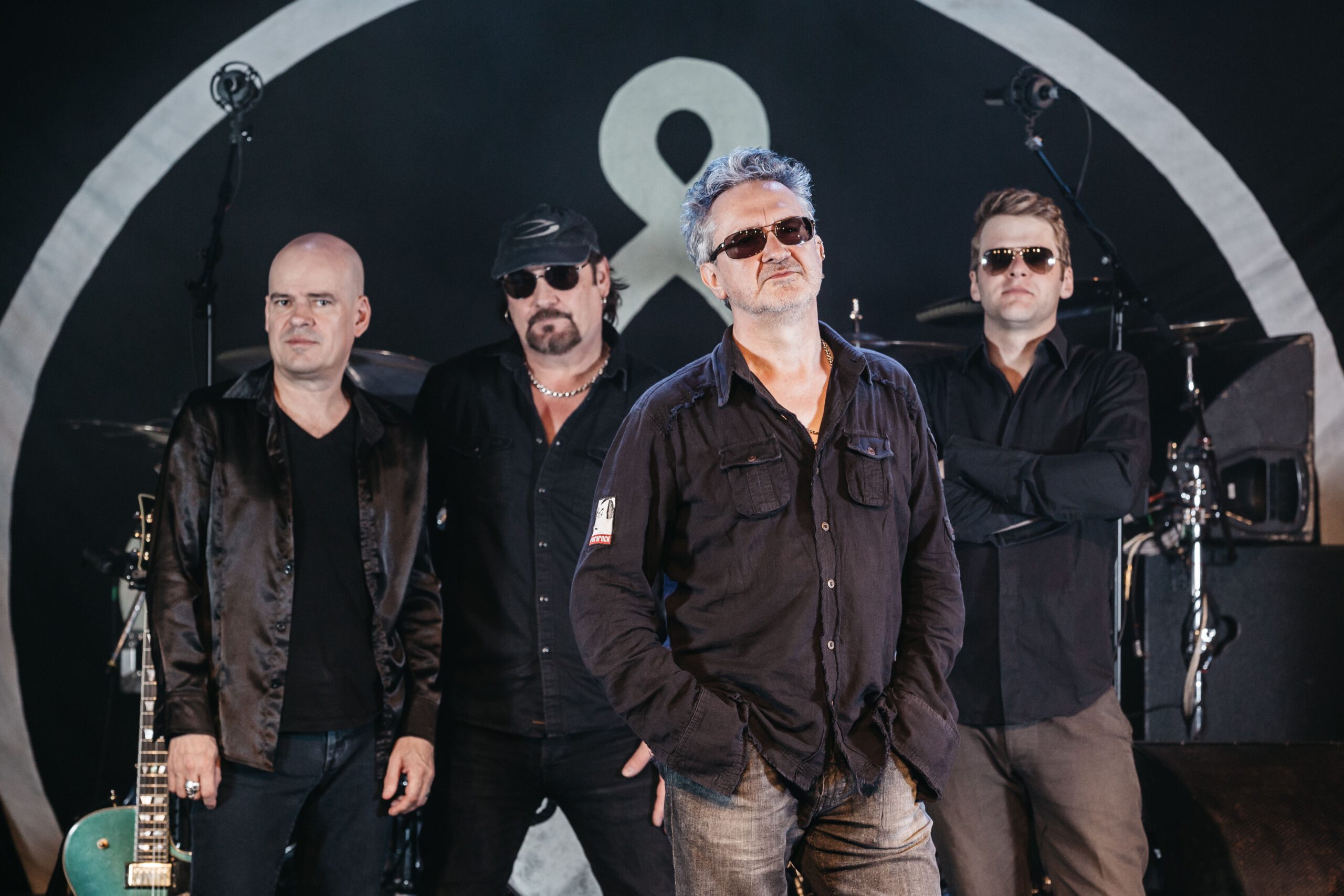 NORMAL THINGS
Is being in a band like The Mission and having success addictive?
,,I would say so. Yeah, for sure! We only really get together maybe 5 weeks every year since we reformed. By the time you’ve been at home for a while you start thinking `Okay, when are we going on tour again! I need to get away’. It is a great way to out and be a irresponsible kid again.’’

How does your life look like when you are not working with The Mission?
,,Oh well, I have a normal life at home [laughing]. No I actually don’t have a job. It is a very complicated situation; you don’t want to know about it. But I’ll keep myself busy, that’s for sure. A busy life at home.’’

Have you already spotted a successor when the curtain will fall permanent for The Mission for whatever reasons?
,,I think the answer to this question is simply no. Not because I don’t think there is one, because I don’t know if there is one. To be honest with you, I don’t pay a lot of attention to new bands. I got a different life now plus I am like a lot of musicians. Once I started being in bands and making music I get less and less involved in listening and following music. Music has become a different thing to me now. ‘’

How would you like The Mission to be remembered when that time comes?
,,As being unique and having a very unique sound. I think we haven’t been given credit over the years from some of the success that we had in the eighties. We sold 3 million albums in the eighties. I think from that success the band should have been definitely more recognized in history of music if you will, than it has been. But you know, what the fuck can I do about that? Nothing! Over the years, I definitely have heard The Mission sound crooked up in other bands. Certain little musical ideas you hear and think: `I know where they got that from’! But that is good, if you can influence others. Flattery is the best compliment and music is an on-going thing. Everybody should just do whatever that is that they want to do and feel like creating and then see what happens.’’

What would you like to say about your fans?
,,I think they are wonderful people. I talk to the fans as often as I can. They are always such lovely, lovely people. And there are a lot of fans that stuck with us right from the beginning. Bless them. Yeah, I love them.’’
—
Follow The Mission on Facebook and visit the Website