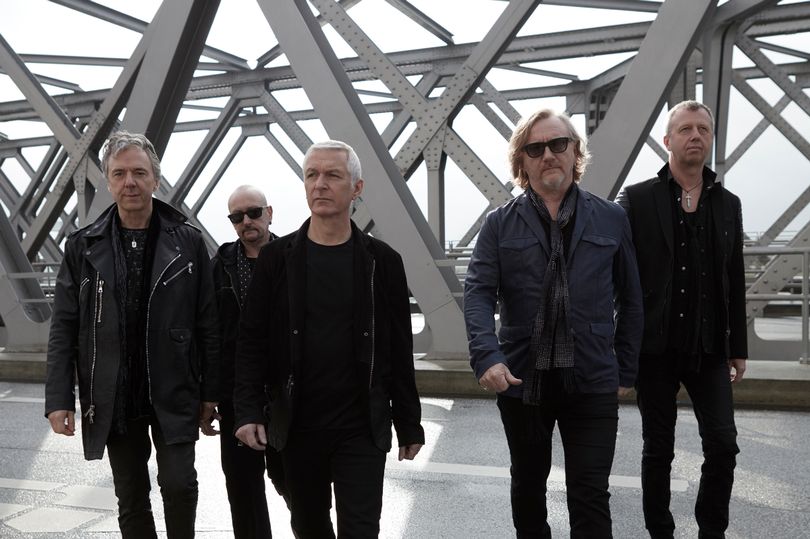 Music And Trivia With Luke And Harry

Not so long ago English rockers Thunder released their new album called ‘Please Remain Seated’. It is an almost unplugged album featuring 12 “familiar” Thunder songs, but re-recorded. Before the recent show in Weert (NL) I had the chance to talk to guitarist Luke Morley and drummer Gary ‘Harry’ James about that new album and other music trivia…. 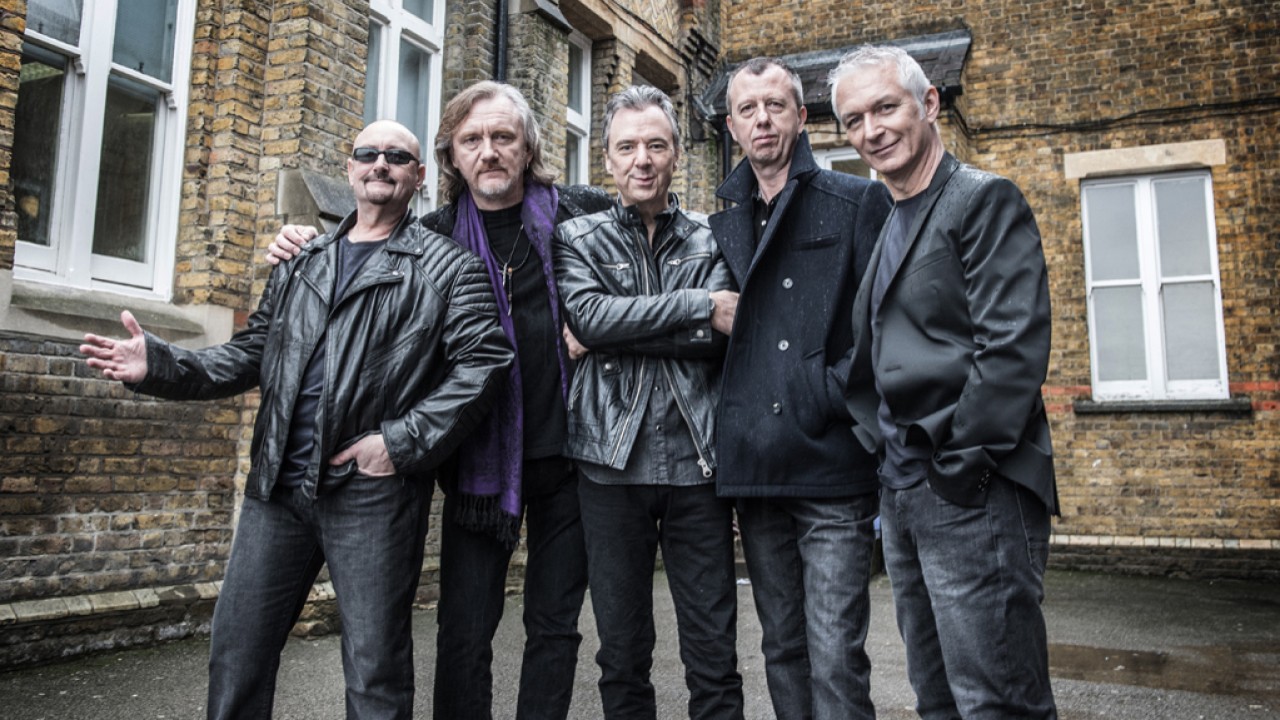 So, guys, who came up with the idea of making a kind of unplugged album?
Luke: ,,Honest, it evolved out of a particular idea really. Initially we recorded an acoustic version of ,,Love Walked In’’, which we were asked to do a few times and after we done that we also recorded an acoustic Christmas song and that all went very well, so we thought maybe we could investigate this concept further and see what happens. When we all embraced this concept we decided that we would approach it in a slightly different way; not just make/record the old songs in a quieter way and acoustic but actually get into the songs and re-arrange and re-record them; so change the style…” 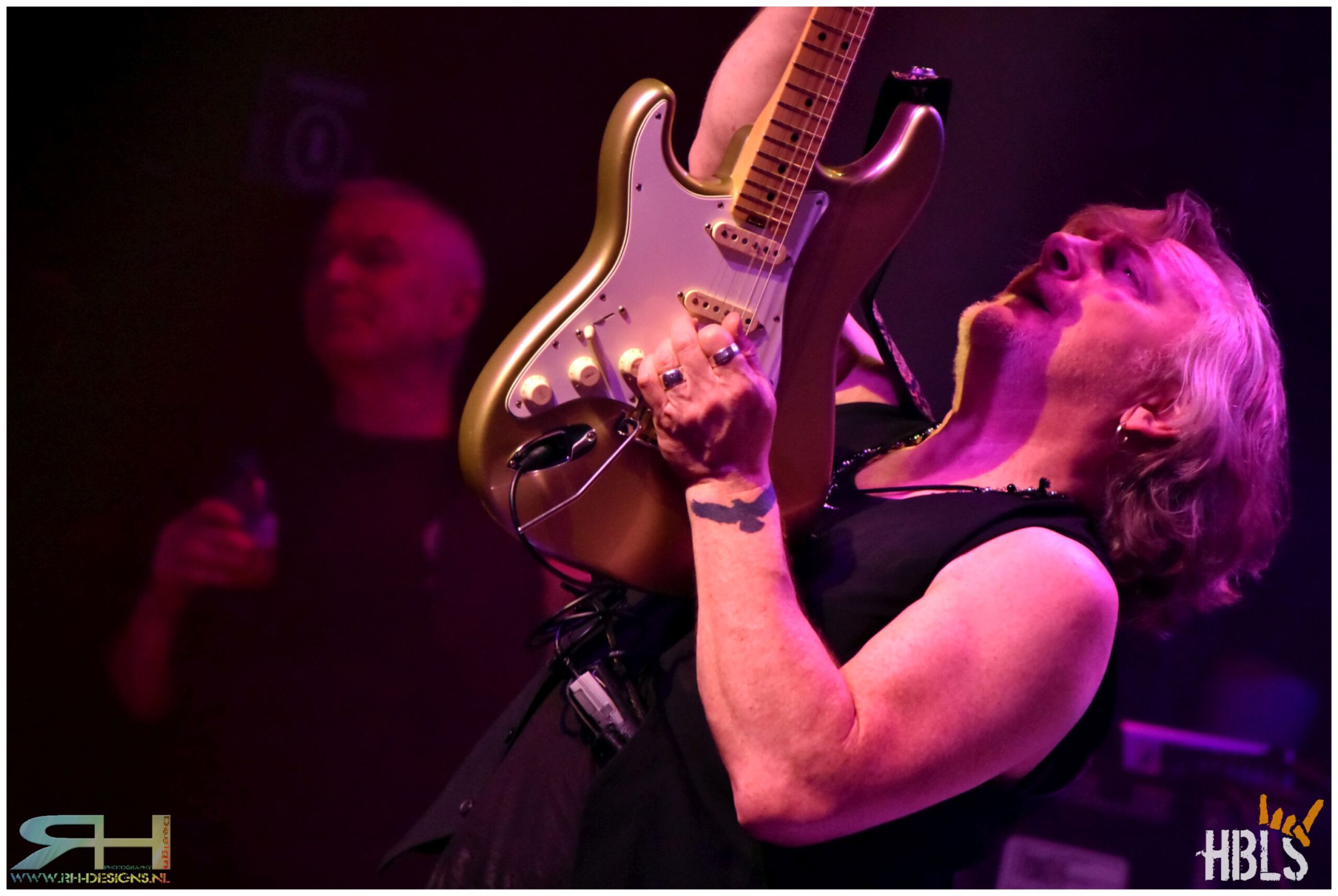 Luke Morley
Who picked the songs for this album?
Harry: ,,We all made a list with songs…..”
Luke: ,,Yeah, everybody basically picked a few tracks and then we convened in the studio and some of them were obvious and had a clear idea; everybody really picked some interesting stuff. Harry, here, came up with ,,Bigger Than Both Of Us’’, which was a B-side I think in 1992 and we really had almost forgotten that one, but when we sat down and started working on that song, we literally jammed it and it came together as something completely different. So, I said: “don’t touch it, it is perfect, move on.” So we tried to approach a lot in that spirit and if something good happened we recorded it. It was important for us that every song should sound differently than the original one, so basically another musical interpretation. We looked at 38 songs, that got down to 20 and we recorded maybe 18 of which 11 made the album. All the remaining songs were put on the extended and de-luxe version of the album.”

Harry: ,,We kind of stayed away from the really great Thunder songs like for instance ,,Dirty Love’’, as we picked B-sides and almost forgotten songs.”
Who came up with the title of the album?
Luke: ,,That was my job, I came up with that, it reflects the album I believe…. Normally we ask people to jump and dance now we ask them to be seated so it is also kind of ironic and humorous, actually…” 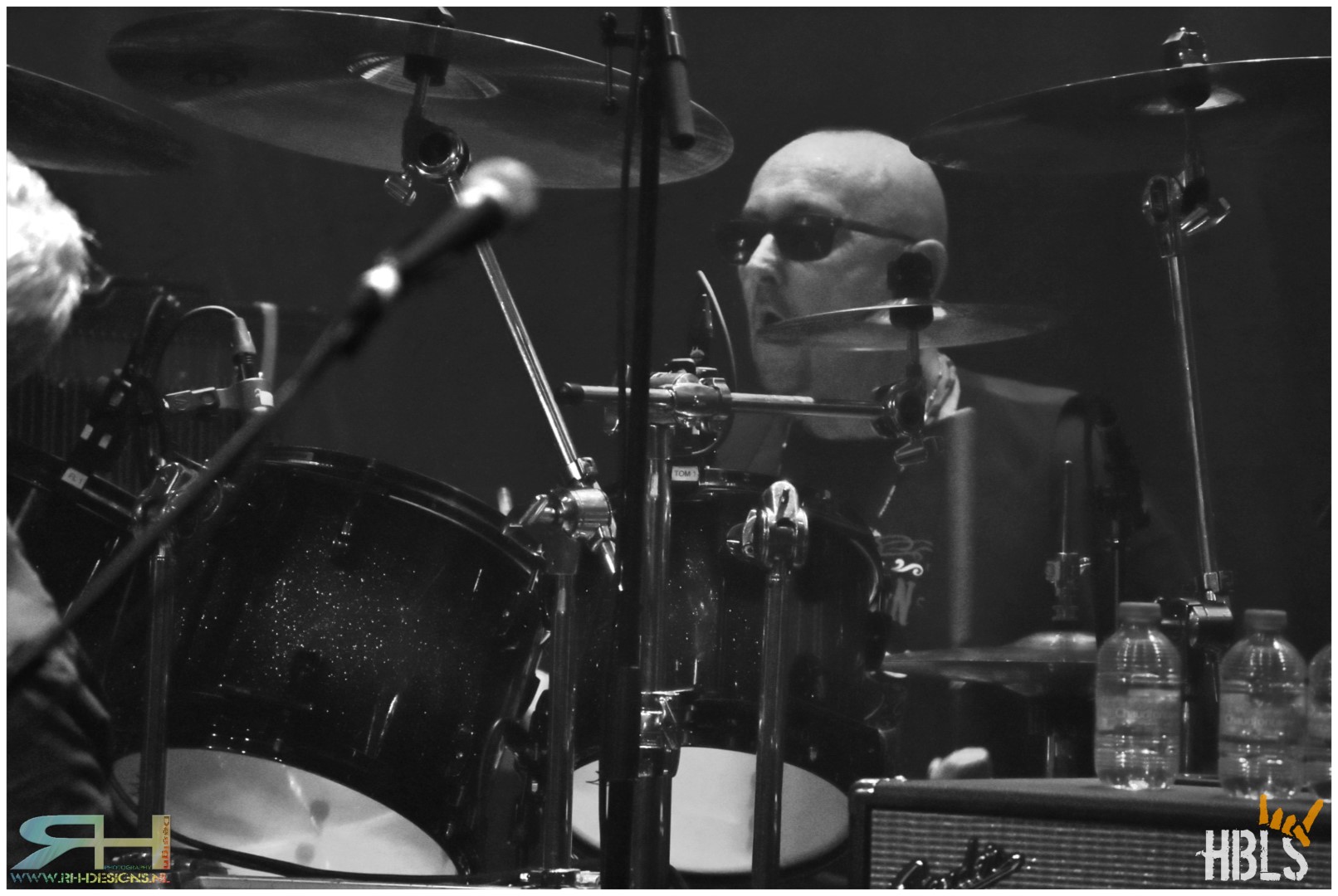 Gary ‘Harry’ James
How was the reception of the album?
Luke: ,,That actually worries me, ha ha ha, as almost everybody liked the album, even the critics… Maybe two people on Facebook stated that they did not like it as it was not rocky enough. However, you cannot please anyone, which is impossible! We wanted to do this album for ourselves as it was an interesting thing and we do not want to repeat ourselves, we do not want to get bored because that will show in our music and then the fans will get bored and we don’t want that to happen.”
Harry: ,,95% of the people embrace what we do, so…”

Are there already plans for a new album?
Luke: ,,Yeah, we will be recording this year, again in several sessions. We already got a few songs ready and the new album will be released next year. Next year will be very busy for us, but we still have lots of fun making records and playing our songs on stage; we still really enjoy that.”
TRIVIA
Life on tour with Thunder is….
Harry: ,,Lots of ham and cheese….”
Luke: (Laughs loudly)  ,,ha ha ha….”

Harry: ,,Lots of red wine and some music as well.” 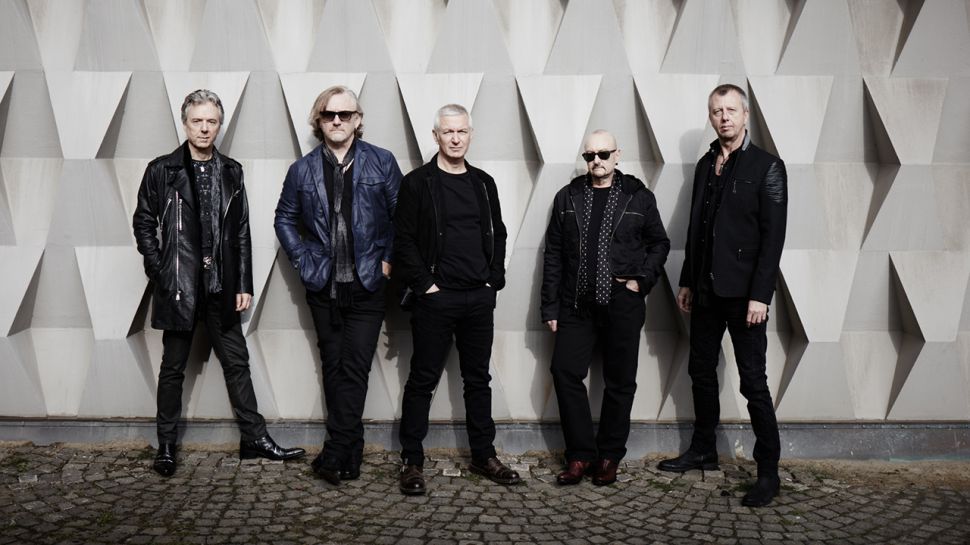 What is the last thing before you play a gig?
Luke: ,,Going to the toilet, ha ha ha… but that is not really rock and roll, is it?” We are not like bands who do group hugs before going on stage, we are usually asleep till 30 minutes before the show, so we are very relaxed, no nerves anymore. The last time I was nervous was in 1990 when we played Donington for 90.000 people and we were the first band to play that day, so..”
What is your guilty pleasure?
Luke: ,,God, I have loads…., like well grilled skin of pork and maybe once a year a Cuban cigar…”
And music wise?
Luke: ,,Frankly loads, like Neil Diamond, The Carpenters, Dawn, their song ,,Knock Three Times’’ is a classic.”
Harry: ,,Sunday roast, a traditional English Sunday beef is my guilty pleasure.”

What makes you angry?

Luke: ,,Rudeness, impoliteness, self-importance is what really pisses me off actually and do NOT get me started on the Brexit shit, ha ha ha…” 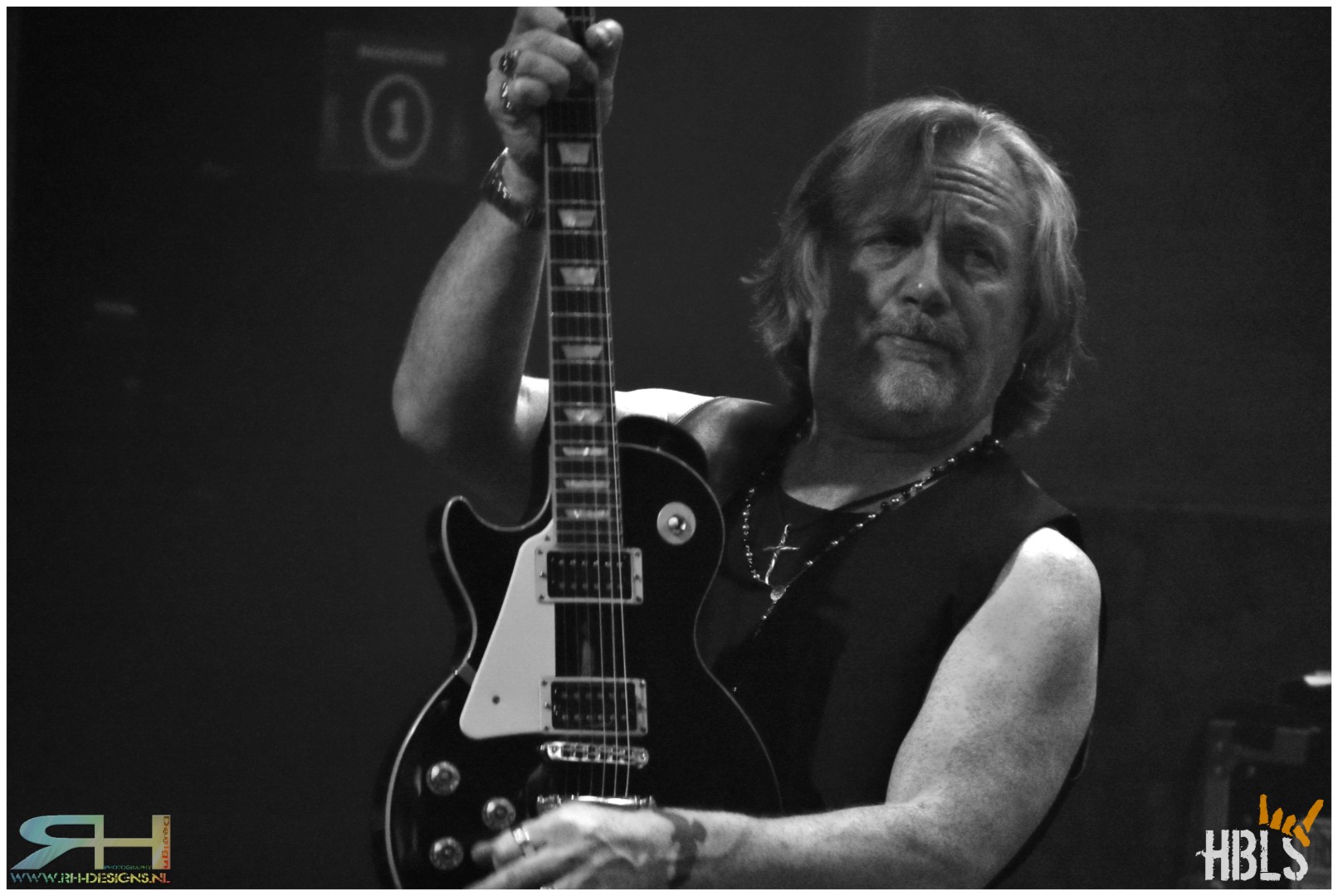 What makes you laugh?
Luke: ,,Oh blimey, Laurel & Hardy, Tommy Cooper; lots of people can be very funny, but we grew up in the seventies so that is why I come up with these names; Fawlty Towers, superb, so good, timeless really.”
Don’t Mention The War..

Luke: (Laughs very loudly) ,,Yeah, right, mate, timeless, indeed.”
What gives you sleepless nights?
Luke: ,,Nothing really, sometimes if I am in a period of writing songs and when I have not finished something during the day I kind of keep thinking about it in my sleep, so I wake myself up in the middle of the night, pick up my guitar and finish the song. That happens quite a lot actually, but normally I sleep pretty well; I do not really suffer from stress. If I sit down with my guitar for long enough usually something happens.”
Harry: ,,I don’t get sleepless nights, I sleep very well.” 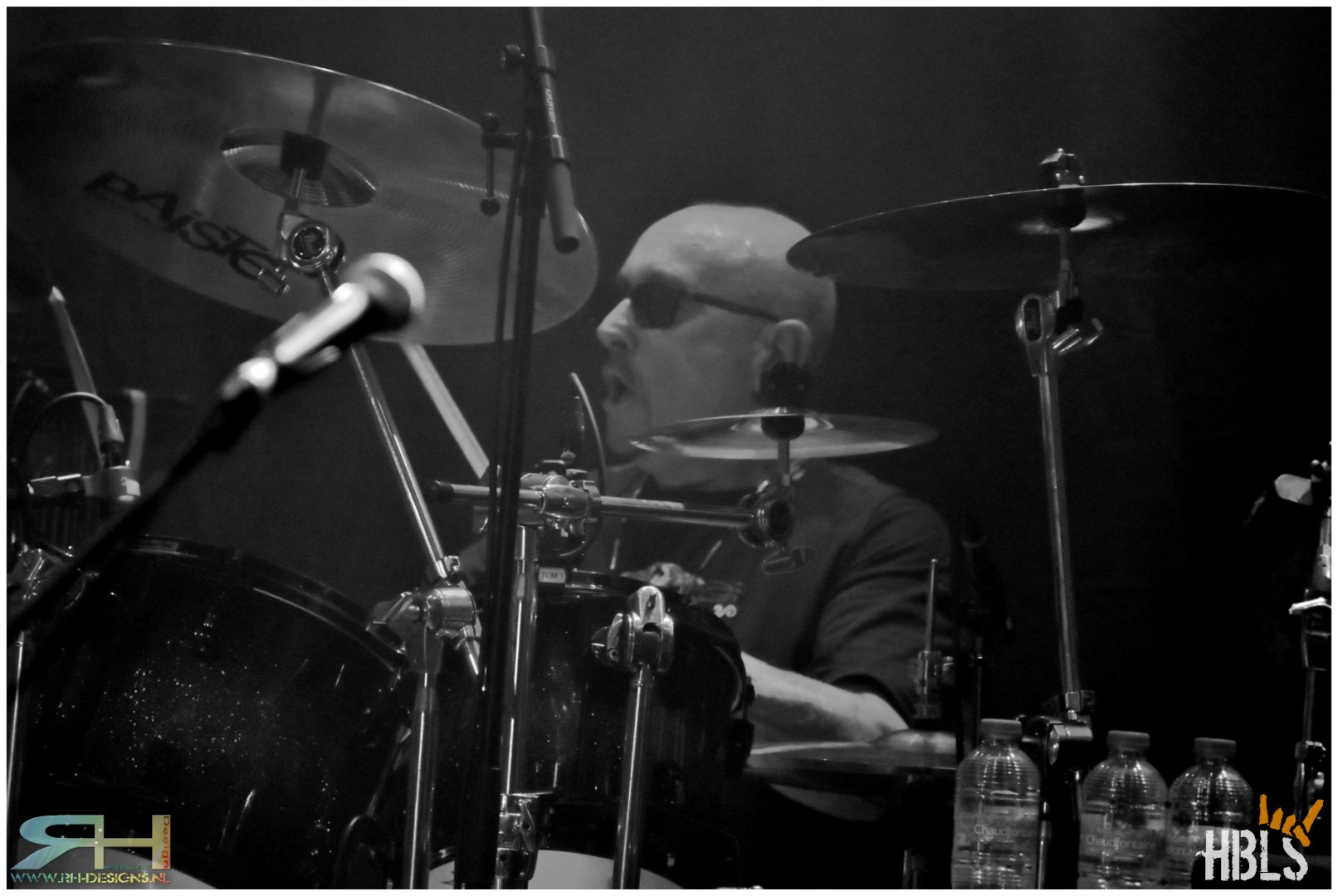 What are you proud of?
Harry: ,,That’s easy, being in Thunder.”
If you would have to pick another occupation, what would that be?
Harry: ,,Travel agent.”
Luke: (Laughter) ,,You would not get a lot of work these days with the internet business, ha ha..”
Harry: ,,I used to be a travel agent a long time ago, now it is a dying business indeed.”
Luke: ,,I would be involved in film somehow.”
Harry: ,,Pornography probably..”
Luke: ,,Ha ha , but maybe even some acting. I kind of regret not doing that when I was young; but anyhow I was so into music, nothing else ever came up, so.”

Luke: ,,Christ, I won’t fucking tell you, ha ha ha… We are from South-East London so we done nothing shady ever, ha ha ha… But never to hurt people.” 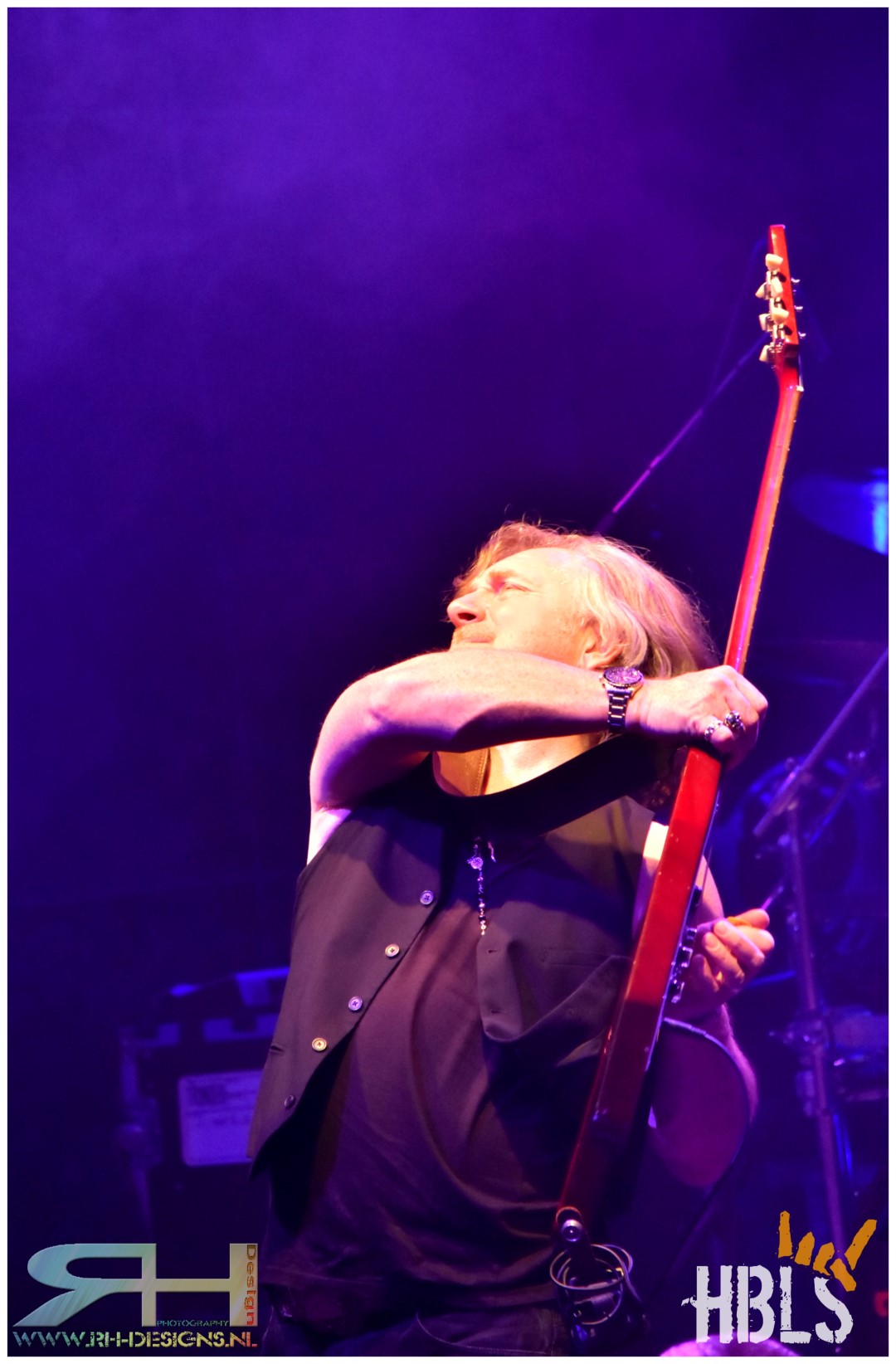 Challenges?
Luke: ,,Yeah, come up with a better album than the last one. Trying to be a good human being. There is lots of pressure on people these days and it is really different now like the time when we were kids, you know. These days of social media stuff means that lots of our lives get disordered, so I try to remain a grounded human being.”
What is the worst venue you ever played, so a real shithole as to speak?
Luke: ,,Oh, now you ask me to.. ha ha ha.. It is an interesting thing the kind of way my brain works as I am very good at putting that sort of things in a forgotten compartment. But anyway, Middlesbrough, ha ha ha, and that is the whole town!!! It is really the worst anywhere where the facilities are really bad and the promotors who put on the show do not give a shit! It is more of an attitude than the place actually. If you have lots of volunteers where people will help you to make a good show that works; so that is why I love your country as I always enjoy coming here. Here you have lots of volunteers who do work in the venues and they want to be here, they want to help out and that’s great, that works. We do not have anything like that in the UK; they do not care and that really pisses me off.”
Best venue?
Luke: ,,Hammersmith Odeon probably because we used to go there as kids and heard all the good bands that played there. Yeah, and the first time we as Thunder sold out the HO we actually believed that we had made it!!!”

Harry: ,,The sound in the HO is wonderful, great acoustics.” 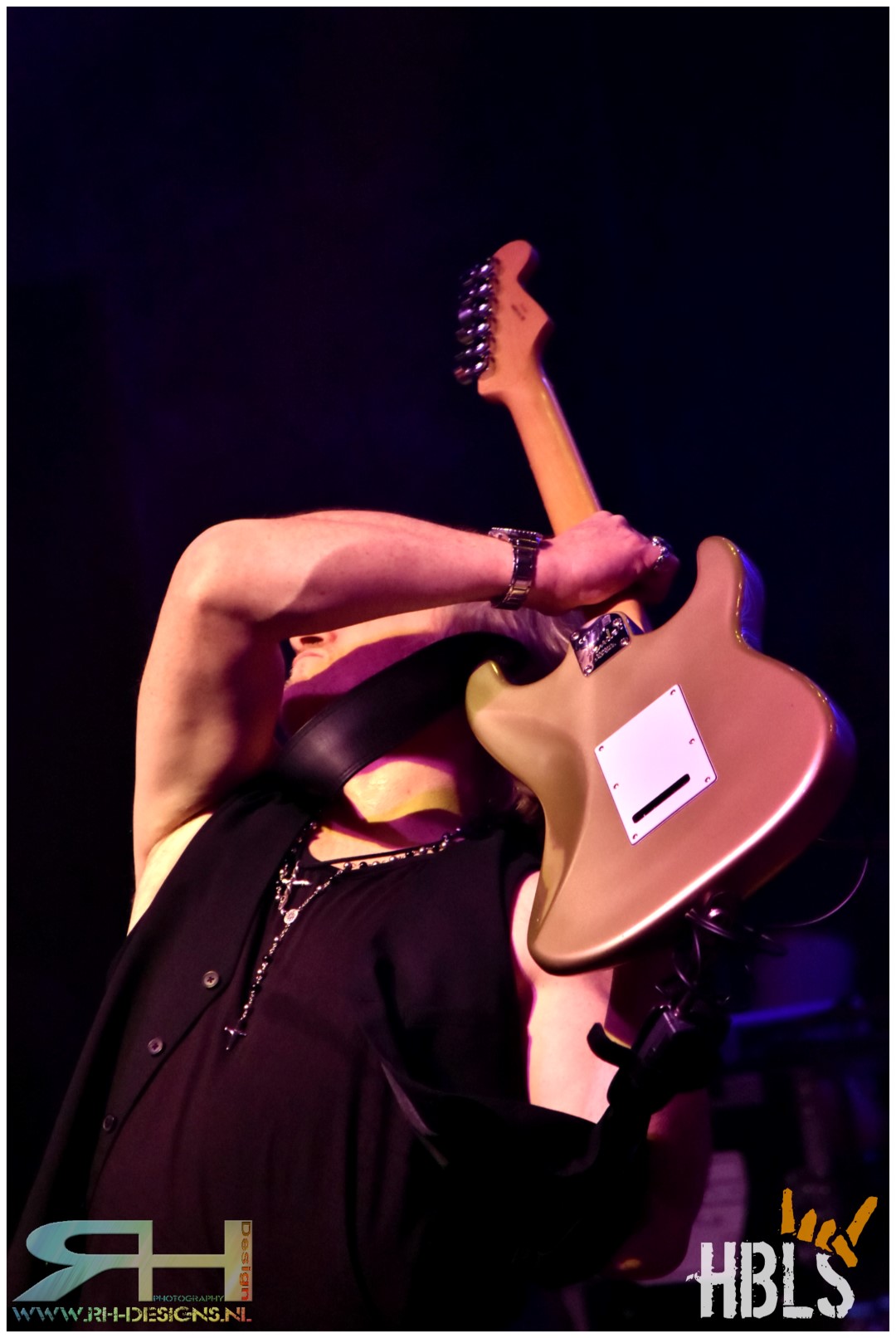 Do you now, after all these years, get some airplay on the radio?
Luke: (Laughing very LOUDLY) ,,Sorry about that mate. In the UK absolutely none, we are played on Planet Rock Radio though. Mainstream radio has never, ever supported Thunder and that pisses me off big time! But, we can do nothing about it, radio is so predictable as the music industry is gradually imploding because it is not about music anymore, it is about how many followers you have on Twitter and so on. So, I think it is a pretty dangerous thing to see how the radio works, it is really depressing as there is no place for DJs who like music, there is only place for DJs who play what the station orders them to play. We had a connection with the radio and the music that was played on the radio. Now, kids go to the internet and that can be a good thing as well as they come across all kinds of music. They maybe hear Thunder and they think, oh, that sounds good, so they go back to: Led Zeppelin and that will take them to the blues, yeah, that’s good. We care about the radio, but we are old, ha ha…”
Gentlemen, thank you for your time.
Luke: ,,You were very welcome, again.”