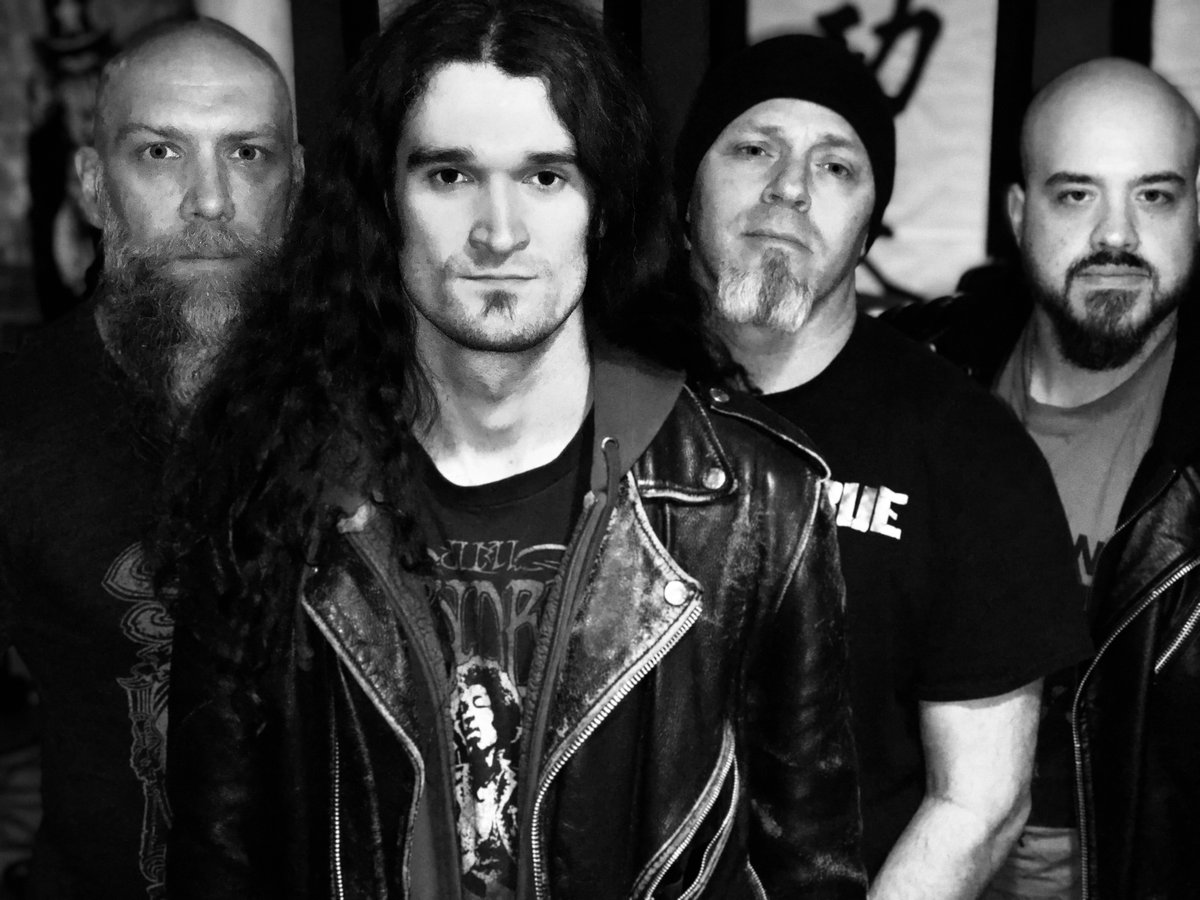 And They Intend To Stay

It’s a fact that many bands fade while they age and that of course makes total sense. There simply ain’t such thing as eternal youth. There are however bands that make an exception, bands that get stronger as they grow older. American cult legend Toxik being one fine current example. Stan Novak took the train to Eindhoven to see the band perform at the ‘Dynamo club’ in Eindhoven, which thru the years has become Toxik’s home away from home. Having played the infamous Dynamo Open Air in 1988 forty (!) years later Toxik returns for Dynamo Metal Fest. Thru the years they also did a number of club shows in Eindhoven. Before the show he had a short sitdown with Josh Christian and newcomer Ron Iglesias. 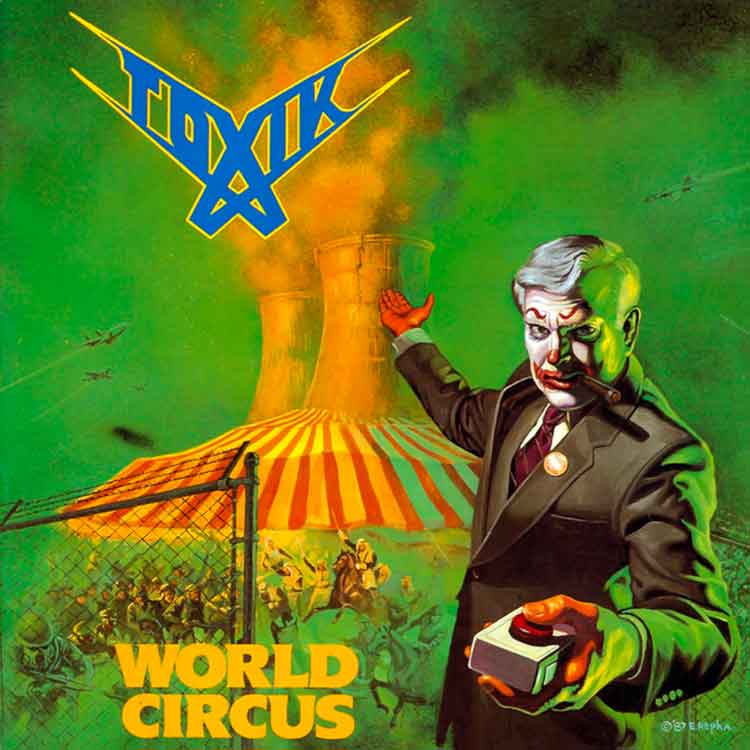 In 1987 this New York based outfit conquered the international metal scene with a fantastic debut album titled ‘World Circus’. The aggressive, yet melodic mix of speed- and thrash metal left a huge footprint and the tours that followed were quite the success as well. ‘Think This’, which followed two years later, turned out to be an ambitious body of work, quite radically drifting away from the in your face approach of ‘World Circus’ which was an instant knockout. ‘Think This’ turned out to be a fight over the full twelve rounds. Due to the many progressive twists the ambitious sounding album did not get the acclaim it deserved. In hindsight it is fair to conclude that the newly adapted techno thrash was simply ahead of its time because nowadays ‘Think This’ is considered a masterpiece in progressive metal. Back in the day the lack of recognition led to an early demise.

Fast forward to 2014. Toxik reunites with original singer Mike Sanders and the comeback gigs indicate that the people have not forgotten about the Eastcoast thrashers. The band makes several European appearances in various formations. In 2018 ‘III Works’ sees the light of day.
The boxset contains the 2014 6 tracks EP ‘In Humanity’, the 2017 6 tracks EP ‘Breaking Class’ and ten songs (eight re-recorded Toxik cuts and two brand new songs) recorded in the current line-up consisting of bandleader/guitarist Josh Christian, drummer James DeMaria, bassist Shane Boulos and singer Ron Iglesias, the latter being the newest member. 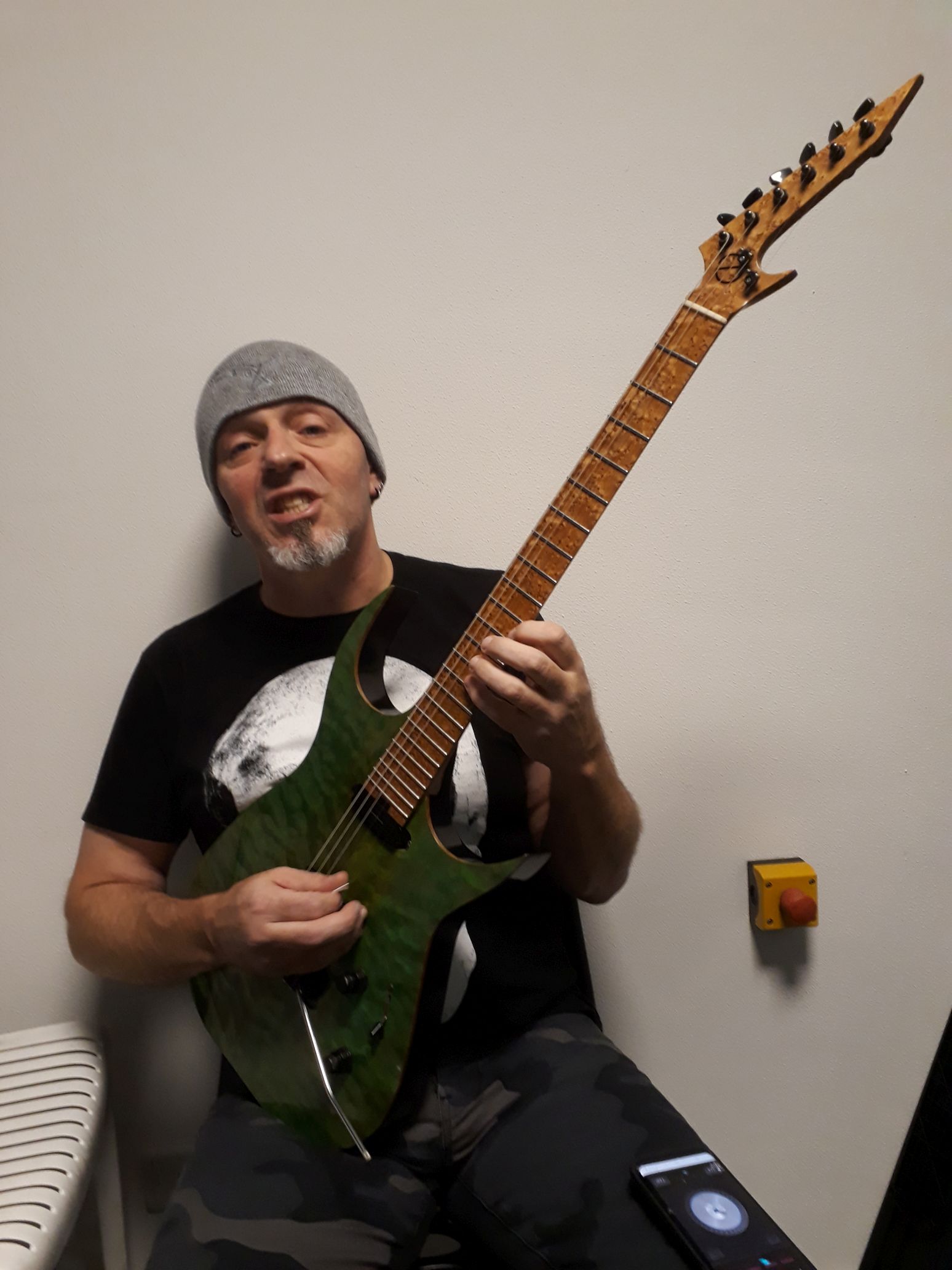 ,,This little tour has been great, every show is better than the one before”, Christian states. ,,Up to this tour we had only done some one off gigs with Ron. Touring however is another ballgame, it’s a completely different animal. Tonight is our last show and so far Ron’s high pitch singing went down well night after night. He absolutely nailed it. He also steps up to the plate as frontman. His confidence has gone thru the roof and with that our confidence grew as well.”

Iglesias on his performance: ,,Before the tour I was nervous on whether or not my voice would hold up night after night. But it all went well from the start. I took good care of myself and made sure that I had enough rest. It’s kinda cool spending my birthday on this tour, I’ll turn 31 tomorrow.”

Christian adds: ,,With his 30 years and boyish looks he looks like a kid amongst us. I am 54 after all. To the 18 year olds in the crowd however he is the old man. Cool to mention that our road manager Dennis turned 50 on the second night of the tour. We celebrated it in style.” 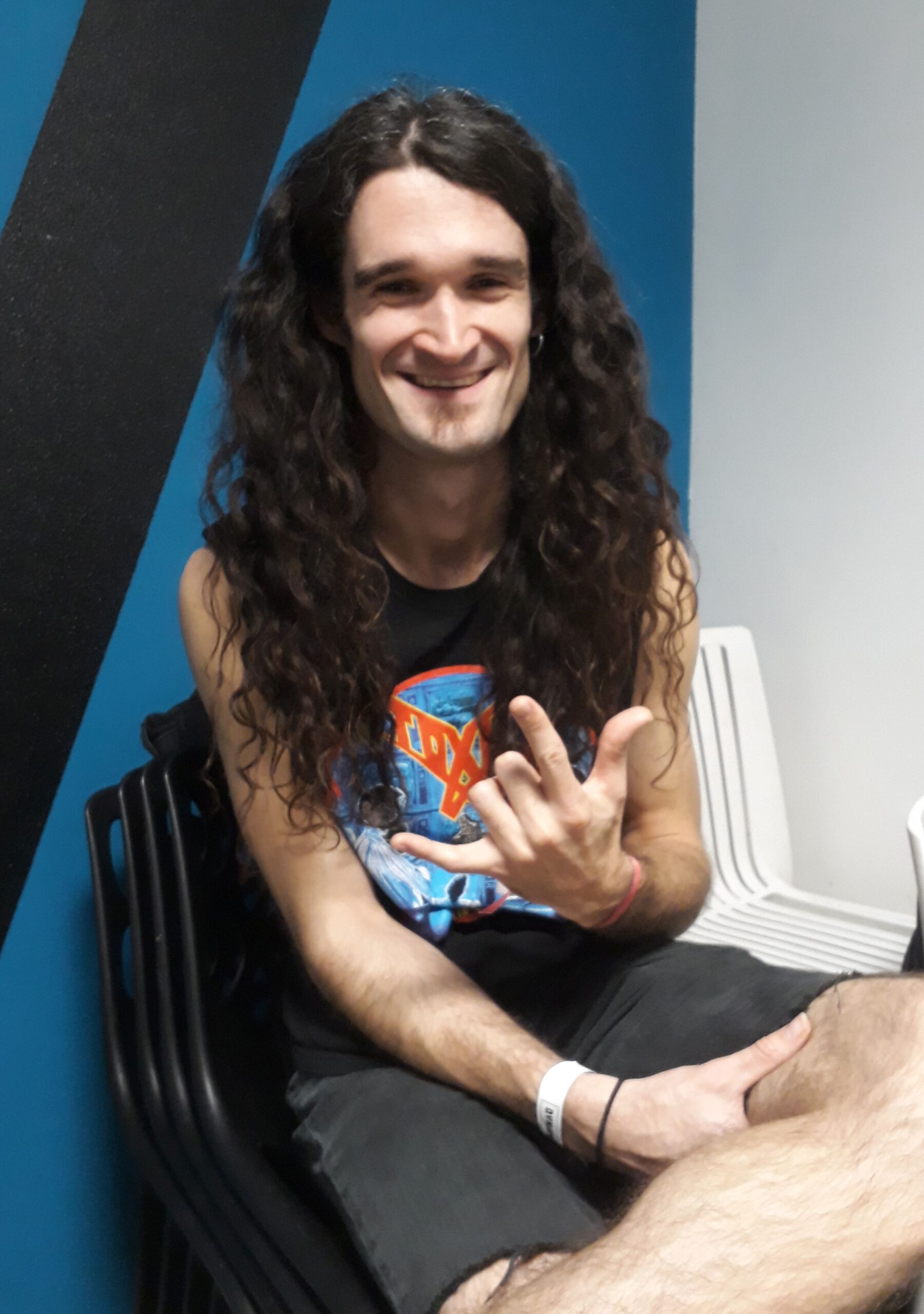 Is this your first visit to Europe Ron?
,,I’ve been in Europe with Toxik for 2 one offs last year. One was in Eindhoven at the Loudnoise anniversary party and one was in Madrid. But this is my first proper tour over here and I am glad to be part of this line-up. It took me some time to find the right voice for Toxik. Both Mike Sanders and Charlie Sabin have such a unique voice. When I did the re-recordings for the ‘Works III’ record last year I still had to find my way through the back catalogue.”

Iglesias joined the band in 2017 but the talented singer/guitarist was on Christian’s radar way before that.
,,I had approached  Ron before in the past. That was after Mike Sanders decided to call it quits. But Ron gracefully turned down the offer. But then, a year and a half or so later he called me and said that he’d be available if I still needed him.”

What made you change your mind Ron?
,,To be honest, when Josh first asked me I had serious doubts if I could physically do it. I don’t think I had the voice and endurance yet. I was also very much in my comfort zone with my own projects (Iglesias is a busy bee with Xenophile, Paralysis and Howlin’ Bill And The Basement Dwellers – SN). But in the end, peers in my surrounding convinced me that I should give it a shot. I am befriended with Mike Sanders and there is also this circle of friends within the Jersey scene. In the fall of 2017 I finally joined.” 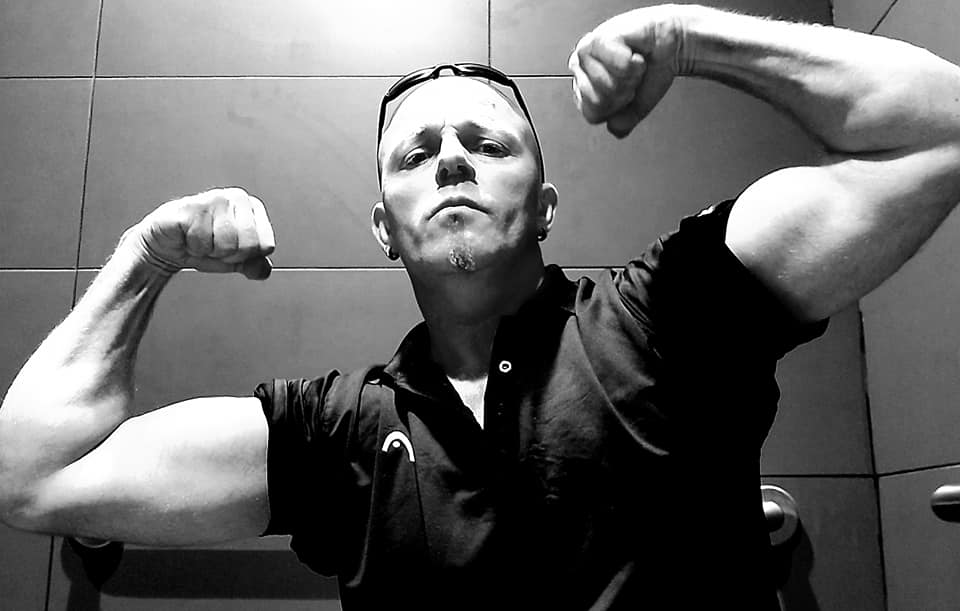 Josh, when you told me that Ron joined the band you said that he’d be handling guitar duties as well.
,,A second guitar is welcome to enrichen the sound. Especially ‘Think This’ songs require an additional guitar. I indeed pictured Ron in that role because I love his playing with his own bands and I am sure that we would work together well. But so far Ron is only handling the vocals and vocals in Toxik is a handful. We asked Eric van Druten, who has been our guitar tech for these past years, to handle the second guitar. And Eric amazed all of us. He was able to study our back catalogue in a heartbeat. We call him the professor for a reason. Eric in the band allows Ron to fully focus on his singing and frontman role. With the way things have been working out it is more than likely that this line-up remains intact for the next chapter, whatever that may be”


,,Our nation is fucked.”– Josh Christian

One of Toxik’s signature songs is ,,Heart Attack’’, the blistering opening track of ‘World Circus’. A song with a prophetic nature since Christian was diagnosed with heart failure years back.
,,I had my first heart attack back in 2006 and since then I had multiple. It’s a genetic thing so I have no choice but to accept it and live with it. But let me tell you that getting older and having your body fail in a way like this is life changing. My heart attacks have been a reality check. Because of it I had to let my carshop go. I took the money out of my business to live on and pay my medical bills and expenses. It changed my whole world but I choose not to play the victim. All that has happened made me value what’s going on more and more. It made me live my life in a different way.
In terms of healthcare the USA is a real mess though. In my situation I should qualify for health benefits but my insurance only covers some of the expenses. Last time I checked I was 500.000 dollars in debt but I take some solace from the fact that I have been dealing with this for a long time now. It is what it is. But it remains rough. Sometime this summer I was literally sleeping in my car. But I am not alone in this, this is the story of so many. It’s a good thing for me that I still have my music. I am also blessed with having a following and people that really care and try to help out. That makes me feel blessed and less victim. But our nation is fucked. The way it treats its working class people is absolutely shameless. Social Security kicks in at 62 in the States so I have eight years to go but by 52 I had already put in more than my share in the system. As a small business owner I paid a lot of taxes all those years. But they are fighting me tooth and nail. I hired a lawyer to start a case but I am still 14 months away from my hearing. So at the moment all I can do is try to make things work for myself and the band. Not much more I can do…

I’ve always known you to be optimistic and chasing opportunities. Has your outlook on things changed in any way? Are you still full of ambition or more living in the moment?
,,Can I have both? I still have a ton of ambition and very happy with what we do as a band. This is the best Toxik line-up ever. I remain optimistic but this whole situation indeed demands me to live in the moment and take one thing at a time. What I do want is this line-up to record new stuff. The two songs we did for the ‘Works III’ release (,,Kinetic Closure’’ and ,,No Rest For The Wicked’’) were a good start, but since then the band really grew as an outfit. These ten days on the road have been nothing but a good thing, a constant laugh. We get along ridiculously well and nothing happens without negotiation. We are all very similar in our thinking.” 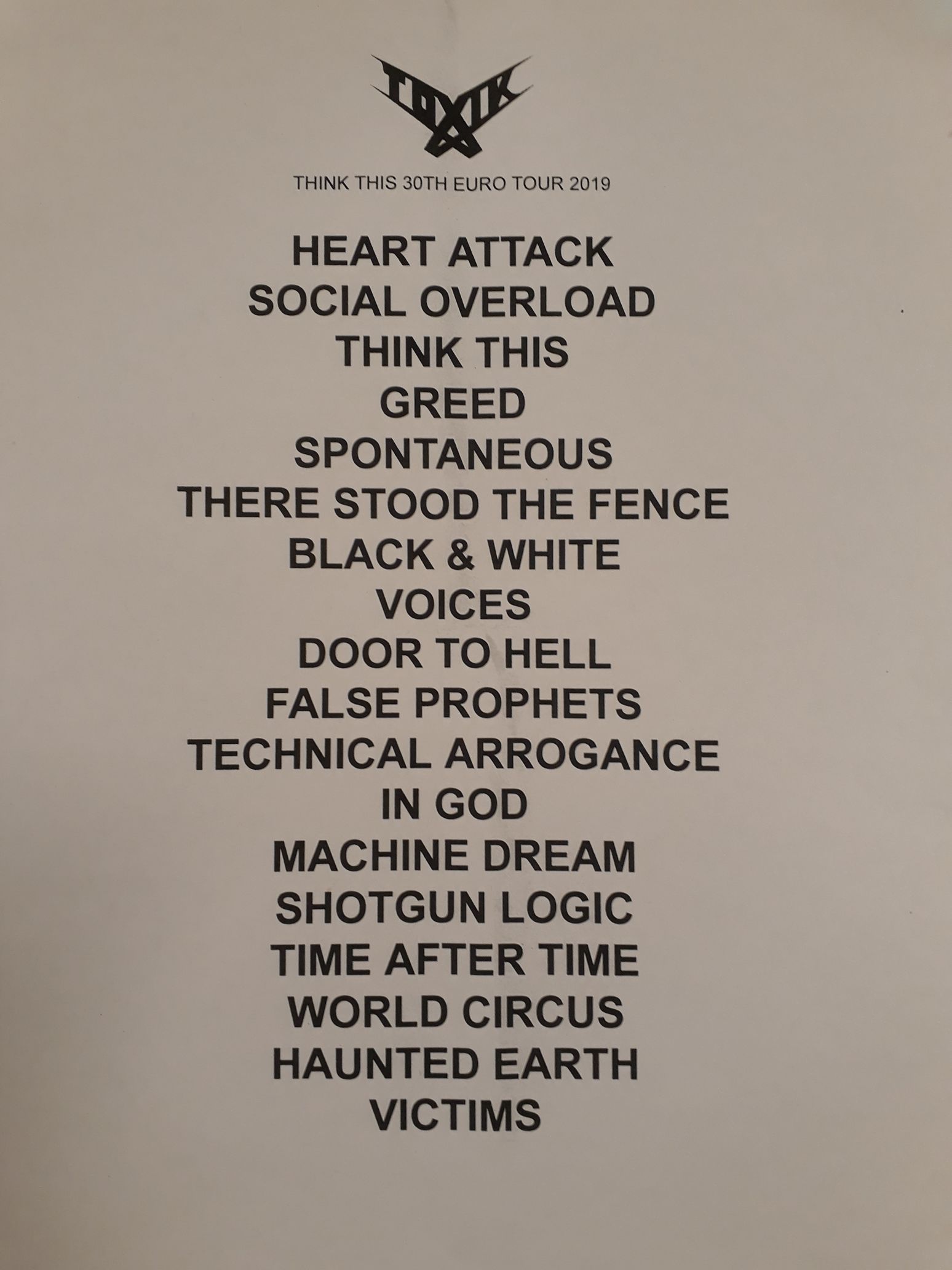 The Toxik shows that I witnessed over the last couple of years were not convincing on all fronts. There was always something missing, whether it was a well-balanced sound, stage personality, song choice or song execution. This 2019 version of Toxik however makes everything fall into place.
Songs, sound and performance are simply spot on. Newcomer Ron Iglesias is Mike Sanders and Charlie Sabin combined into one and his natural charisma is the icing on the cake. Iglesias gets it right form the get go. His convincing opening salvo in ,,Heart Attack’’ sets the tone for his vocal masterclass of the next 75 minutes. Iglesias also proves to be the perfect frontman with his unlevelled energy and charisma. Josh Christian must be a happy man and he is. This current line-up brings out the best of him and the best of Christian is an incredible lot. I mean, Christian at half level would still be a force to reckon with. On this tour he is clearly on top of his game and it is hard to imagine that we are watching a heart patient perform. His fretwork and energy is absolutely astonishing. Christian plays better than ever and is a major leaque player who absolutely deserves wider recognition. The rhythm section of Shane Boulos (b) and James Demaria (d) is tighter than a babyduck’s ass and second guitarist Eric Van Druten lays down a mighty carpet for Christian to flourish on. 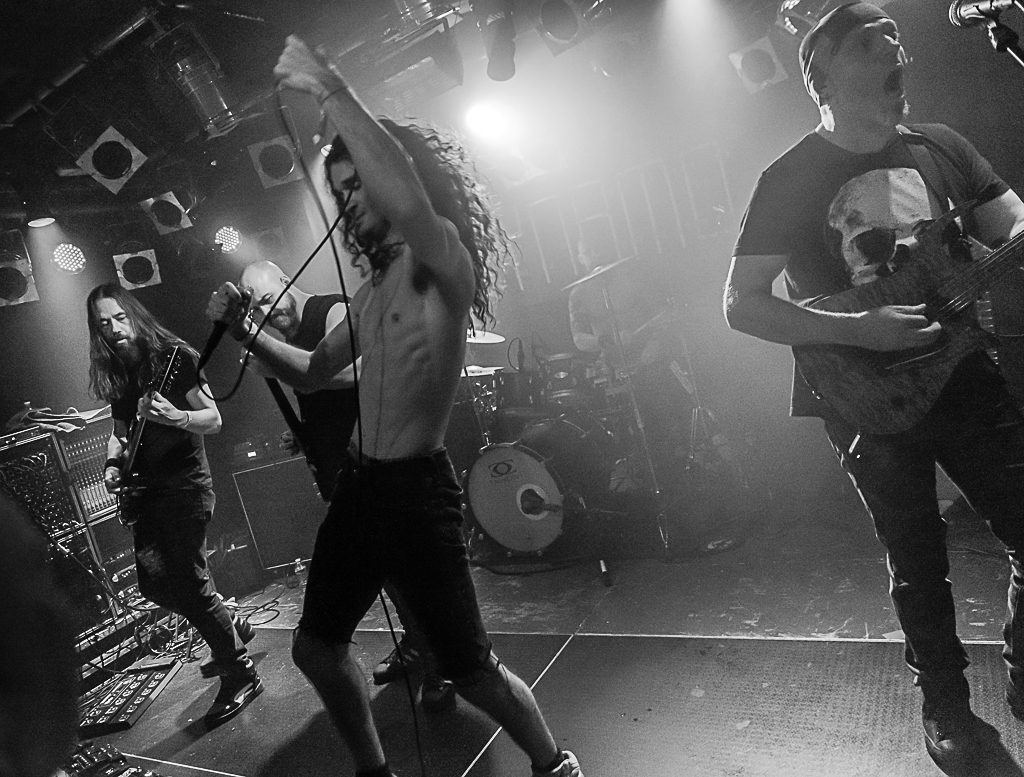 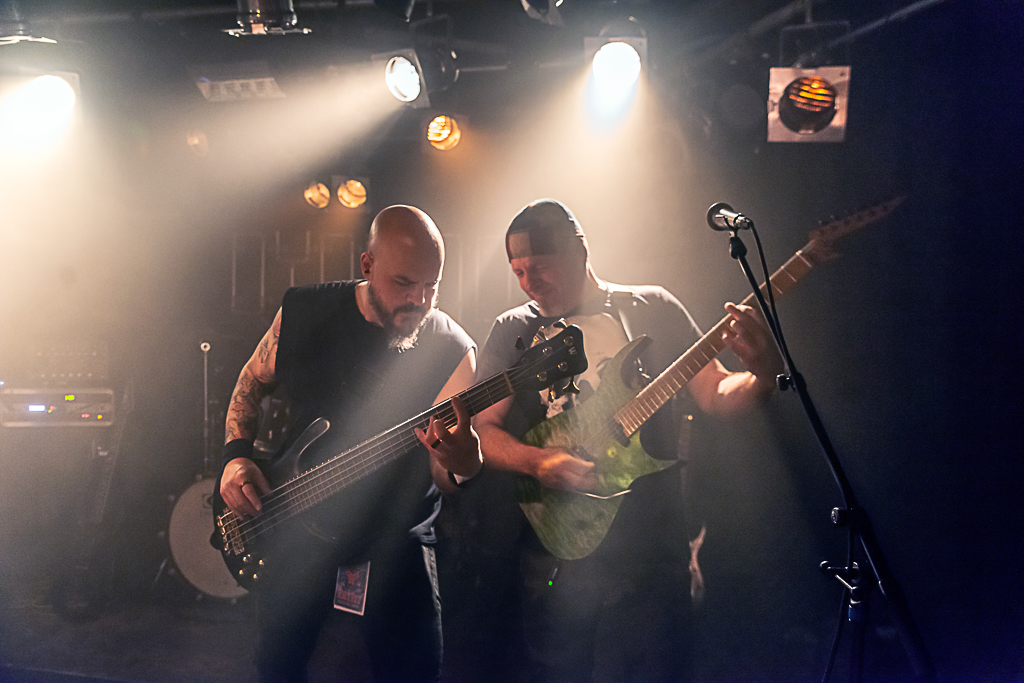 Seven thrash grenades of ‘World Circus’ plus the majority of ‘Think This’ since only the groovy Led Zeppelin cover ,,Out On The Tiles’’ and ,,Technical Arrogance’’  (although mentioned on the setlist) are left out. The set opens and ends with a batch of ‘World Circus’ cuts and in between the atmospheric  ‘Think This’ is being played in its’ original sequence with halfway thru some more ‘World Circus’ frenzy thrown into the mix. All in all this show is a serious contender for concert of the year! The 140 people that were there had a blast from the past. If this line-up keeps intact and starts working on new songs than a third classic record could be in the making. 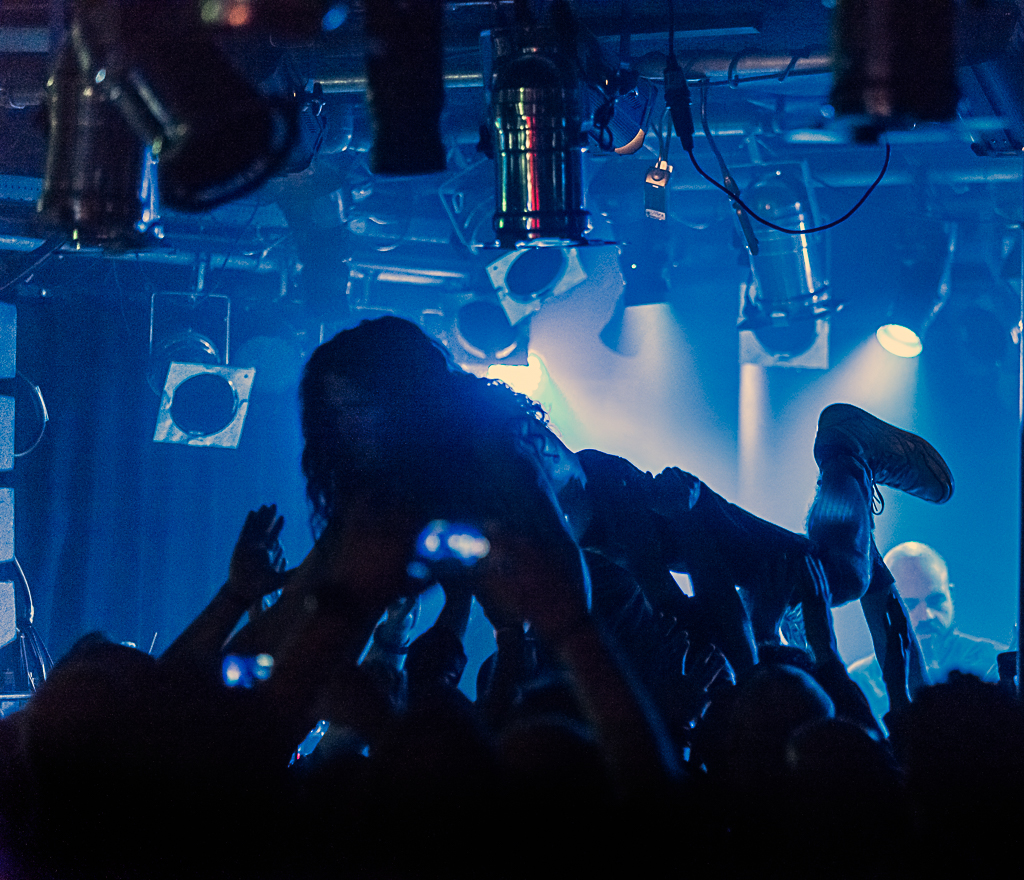