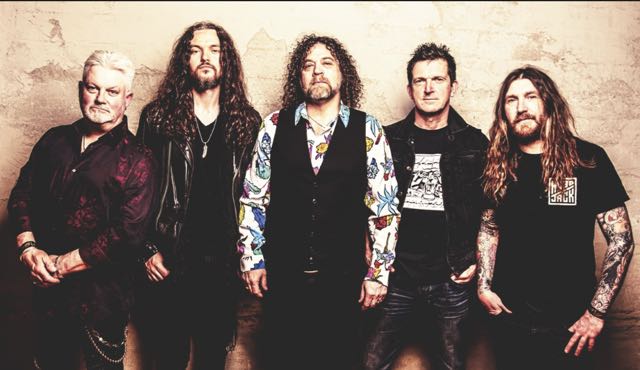 I was barely in high school when the New Wave Of British Heavy Metal invaded the music scene. Not only Iron Maiden, Saxon, Judas Priest, Angel Witch and loads of other killer [new] loud sounding bands got a hold on me, also the songs of Tygers Of Pan Tang crawled into my head and all these awesome heavy musical ingredients, cool guitar solo’s and riffs, rapid tempo’s, great vocal lines and musicality was exactly what I wanted to hear. 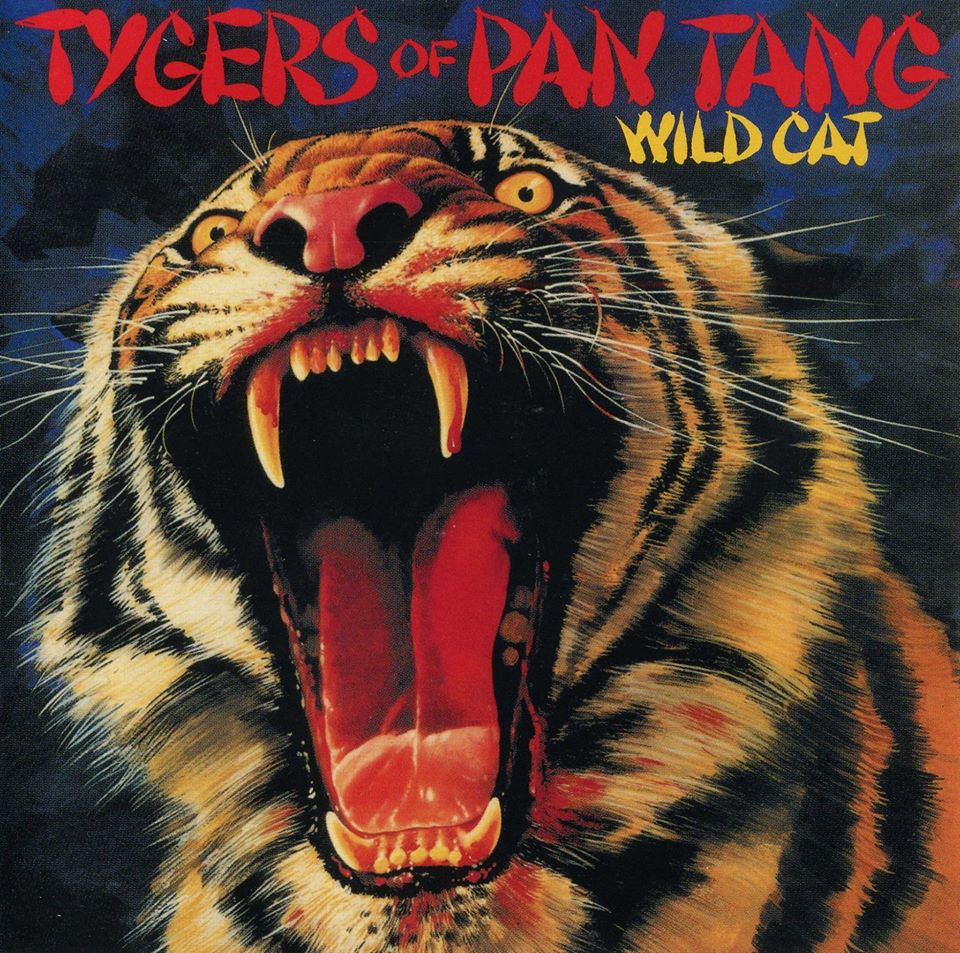 Tyger’s debut `Wild Cat’ [1980] was a great starting point, but it was their second release `Spellbound’ [1981] with new singer Jon Deverill that absolutely kicked big ass and actually still is one of my old time favourite vinyl of all time. After the third album `Crazy Nights’ [also 1981], the band got in phases of break ups and make ups and various line-up changes, but somehow Tygers Of Pan Tang always got back in the saddle at one point and right now with the recent release of the brand new studio album `Ritual’ they have put a very strong ace at the table. Therefor I felt it was about time to get in touch with my old heroes and guitarist, original member Robb Weir was more than happy to share his thoughts on the big cat’s career and future plans.

,,We have undoubtedly made our mark over the years, even down to the point of Metallica starting!’’–Robb Weir

First I want to know what has kept the Tygers of Pan Tang roaring for 41 years?
,,Love, understanding, amazing fans and music press and a serious infection which I can’t get rid of…..Rock ‘n’ roll music!’’

Looking back at the career of the Tygers of Pan Tang, how do you see the band in the big picture of rock and metal history?
,,We have undoubtedly made our mark over the years, even down to the point of Metallica starting! In Lars’ original newspaper add he cites the Tygers songs as material to jam with when advertising for fellow musicians to join him! We still go out there and put bigger acts to shame which I think is good as it shows that even after all these years we are still hungry big catz!’’

Are you comfortable with what you have accomplished with the band or do you feel there could have been more, if only you got more luck or made other decisions, met the right people, or ..?
,,Hey, life is what you make it, nobody can live on, ‘what might have happened,’ or ‘hindsight.’ Life in the Tygers has been great and I wouldn’t change anything. We are playing bigger shows than ever and achieving gold albums, so I guess we are still ‘down with the kids?’’’

Why has Tygers Of Pan Tang gone through as many line-up changes over the years? Since you started with a vision, was it hard to be always on the same page as a band, or were there other matters that made band members call it a day?
,,People are sometimes in bands for different reasons. I’m sure we all start out with the same vision to be successful and maybe make a living out of the music business but as life develops for individuals their circumstances change and people move on. Everybody who has been a part of the band over the years has given their own piece of history and for this I am eternally grateful to them. They have made the Tygers what it is today, bigger and stronger than ever.’’ The first two albums `Wild Cat’ and `Spellbound’ became true classics. When you think back to that time, writing, recording and promoting these albums, what comes to mind?
,,It was a truly fantastic time, there’s no doubt about it. Because NWOBHM was the ‘new kid on the block,’ so to speak the Tygers were embroiled in a new, fresh music genre and all was to play for. With ‘Wildcat’ we had our first hit album, entering the national British charts at 13 and ‘Spellbound’ charting at 18. So we were right in there with the likes of Iron Maiden, Saxon and Def Leppard. In the early days MCA did a great job for us making the band a household name if you were into rock music.’’

Why did these two albums make such an impact on the hard rock scene you think?
,,I think they were just what people wanted, hard rock, heavy metal whatever you decide to call it, it was just what the doctor ordered at the time. And the songs on the early albums have stood the test of time as we are still playing some of them 40 years later in our live shows and people love them!’’ 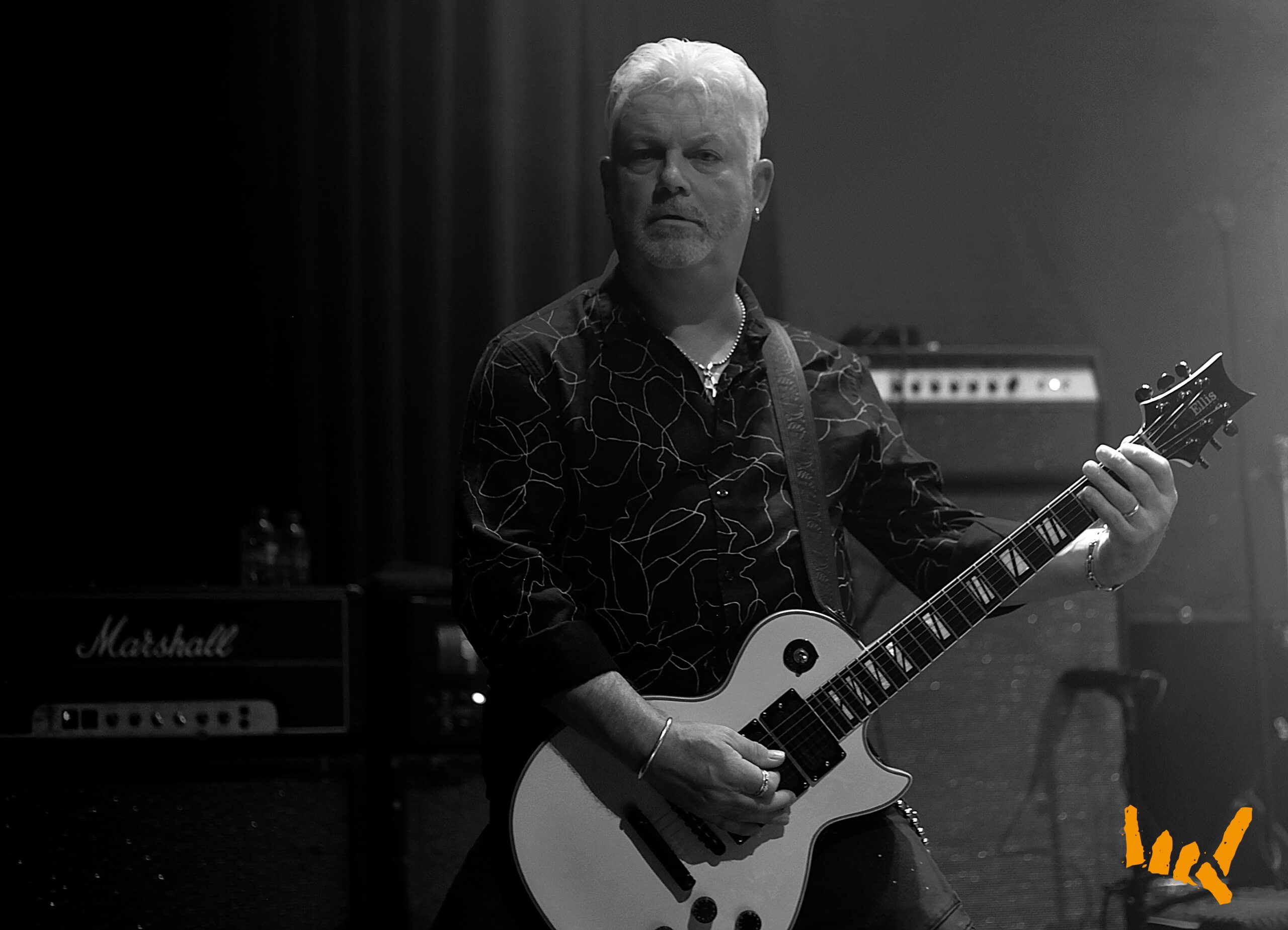 What has become your signature as a guitarist?
,,In the sing along section of the live set I place my plectrum on my forehead, where it sticks because of sweat! I also love to point at the photographers as they are taking a shot of me.’’

,,With ‘Ritual’ I fell we have jumped up two stairs, it’s that good.’’–Robb Weir

Does it surprise you that the new CD `Ritual’ is very well received by press and fans?
,,You know, with every new album you produce you have to up your game and try to better the last one. I see it like climbing stairs, in order to get to the top you have to go up to the next level. With ‘Ritual’ I fell we have jumped up two stairs, it’s that good. Please don’t think I’m being big headed here, it’s what I genuinely believe. ‘Ritual’ ticks everyone’s boxes from melody to metal. Job done!’’

What has been the real magic for you when writing and recording `Rituals’?
,,First of all, when you come up with a killer riff for a new song idea I think you know deep down it’s going to work. That happened every time we jammed the songs for ‘Ritual’. When we finally got into the recording studio the whole process went very smoothly. Fred Purser our engineer was very skilled in the whole recording process and that made things even easier for us. Fred’s advice and production guidance was invaluable to us. The ‘magic’ for me is when the final product is ready and you play it for the first time on your own stereo.’’ 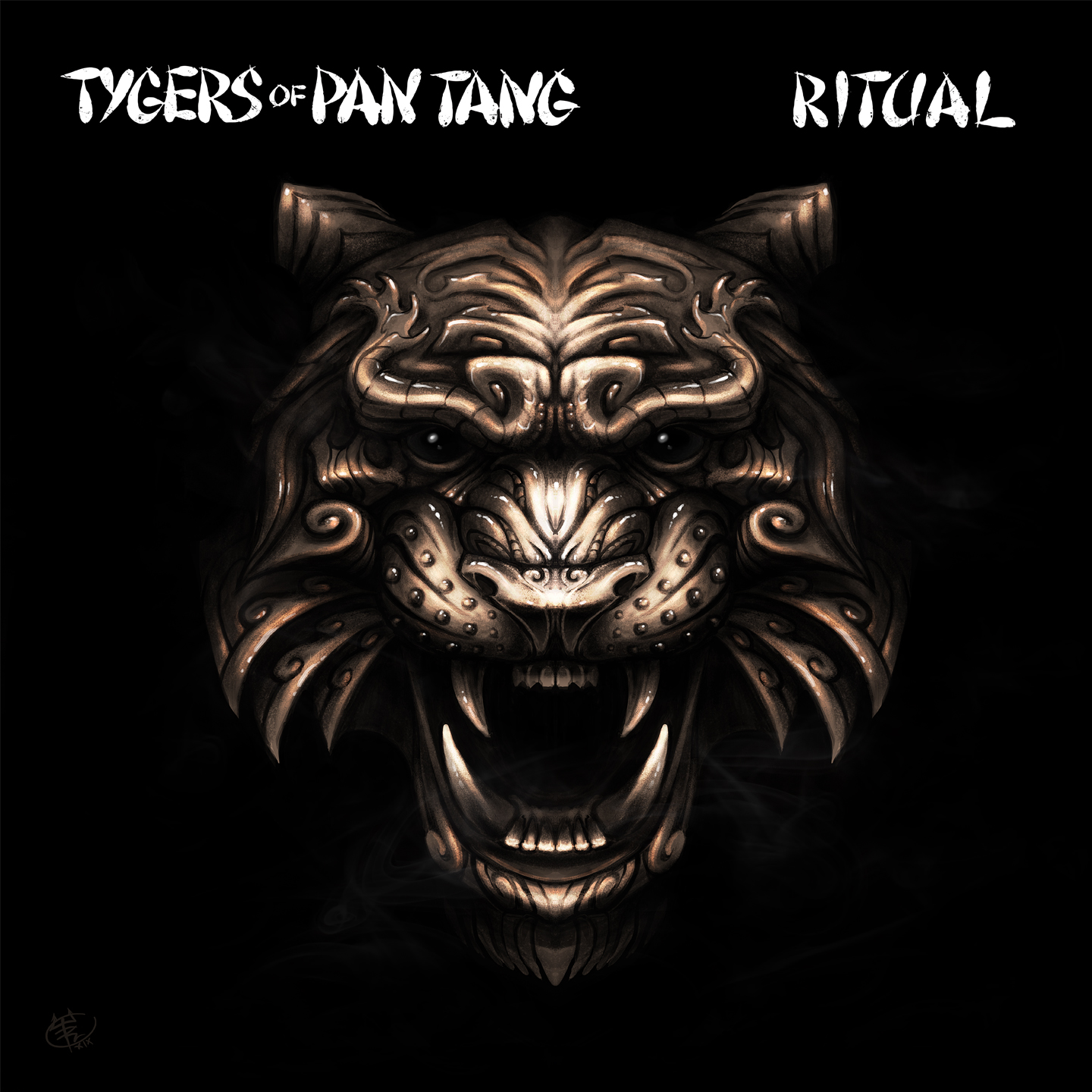 Why did you choose to release the track ,,White Lines’’ as a single on 12” vinyl? What makes this song a perfect single candidate?
,,When ,,White Lines” was being mixed it Copenhagen our record company boss popped in to have a listen to see how all the mixes were coming along. Target records our record company is Danish and have their offices just round the corner from Medley recording studios where Soren Andersen was mixing ‘Ritual.’ They both decided ,,White Lines’’ would make a perfect first single and suggested it to our management. I was a great choice.’’

The B-side features Tygers Of Pan Tang’s first single ever, ,,Don’t Touch Me There’’. How do you feel about this song after all these years and is this a new recorded version or the original version?
,,I wrote this song back in 1978, 41 years ago! We recorded a new version which has 4 guitar solos all by different guitar players. Me, Micky, Fred Purser and Soren Andersen. It just felt like the right thing to do. We still play this song in our live set and it goes down very well every night.’’

,,Our strength lies in the quality of the musicianship and an undying love of the Tyger legacy and brand.’’–Robb Weir

There is a digital bonus track with the vinyl release called, ,,Love Will Find A Way’’. This song is on the CD but not on the vinyl release. Why is that?
,,Vinyl is limited by time constraints per side. I think it is 23 minutes or something like that. Our album was longer than the vinyl so something had to give. We did a couple of other track edits to shorten them and had to omit, ,,Love Will Find A Way’’ from the LP. You still get it as a digital download so no one misses out!’’ Do you feel you have a solid line-up at the moment? And what do you consider as the strength of this line-up?
,,The current line up has been in force for nearly 6 years now. Our strength lies in the quality of the musicianship and an undying love of the Tyger legacy and brand. When we take to the stage we always deliver a worthy performance. We are not the type of band that just stand and look at their feet while playing, it’s a proper workout!’’

Tygers Of Pan Tang is touring, how do you experience being on the road these days comparing to the old days?
,,It’s totally different touring today than in the eighties. Back then you had to carry a huge sound system, a lighting system and of course the personnel to build and run the systems. It was a huge cost running two 40 foot articulated lorries, a nightliner crew bus, a band bus and paying 16 crew! Today most venues have built in sound and lights and you can tour with minimal crew. I miss the old days mind, there was something about those huge sound systems….’’

How do you feel about the future of Tygers Of Pan Tan?
,,The Tygers are very much a going concern! We have plans for a live album and are writing for the next studio album as well as well as constant touring. It keeps my heart young! And I want to say a big thank you to the HeadBangers LifeStyle readers for their time reading this article. Please check out the new Tygers Of Pan Tang album `Ritual’ I think you’ll love it!’’ 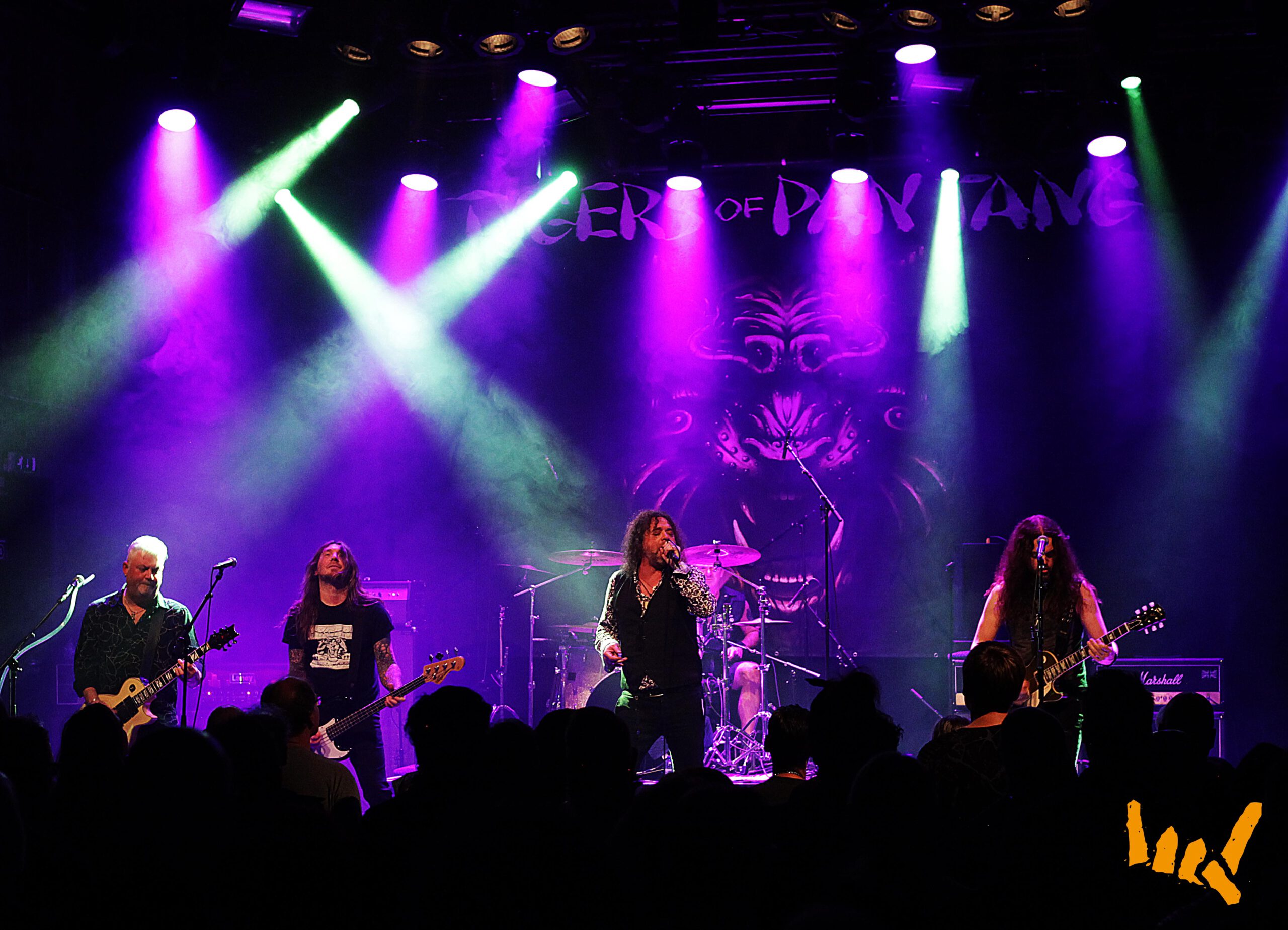