A Trip Down Memory Lane

The Netherlands did have a pretty flourishing rock and metal scene in the eighties. Bands like Highway Chile, Bodine, Picture, Helloïse and Vengeance had quite some success in the scene with VandenBerg also being a worldwide success. To celebrate these successful times singers Jay van Feggelen (Bodine), Leon Goewie (Vengeance), Robert Soeterboek (Highway Chile/Wicked Sensation) and Stan Verbraak (Helloïse/Highway Chile) supported by new Dutch rock band Rebelstar take a trip down memory lane and perform a 2,5 hour set during their current tour. HeadBangers LifeStyle contacted Stan Verbraak to talk about the United Voices Of Rock tour and about the recently released 6 (!) cd box of Helloïse. 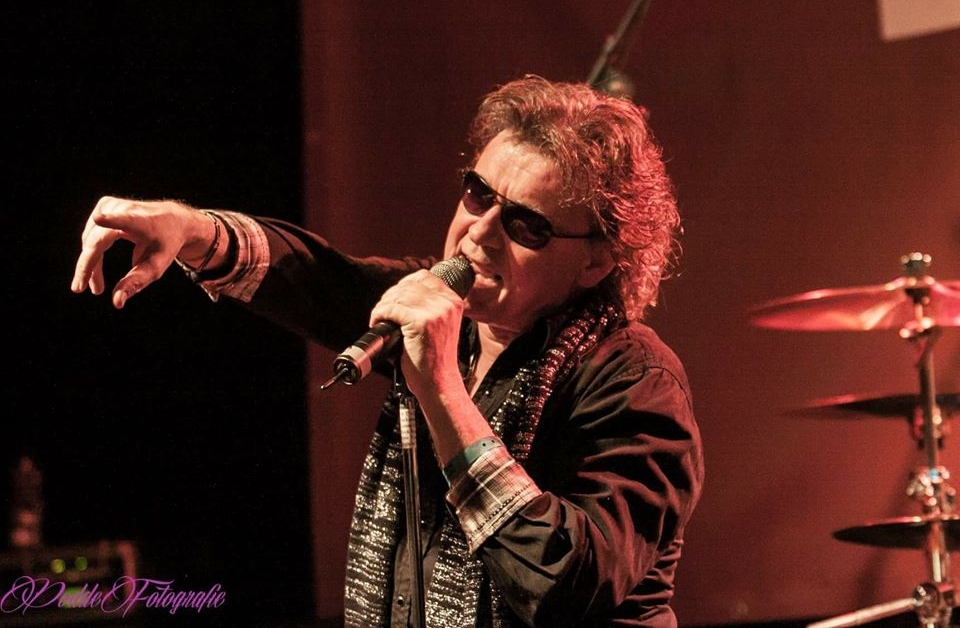 Stan, how did the idea for United Voices Of Rock-tour come about?
,,Credits for that have to go to Robert Soeterboek from Rotterdam Rocks!. Rebelstar was playing at that festival last year and Robert had the plan to make it something special. He knows all the singers and thought it would be a cool idea to bring them out as a surprise and let them sing two songs each, just for the fun of it. So Jay, Leon and me had one rehearsal and went for it. The band was great and the response was even better. People started talking about it and venues started to call so it was a logical step to bring it on the road. For Rebelstar it is a good way to promote themselves. A second edition is in the pipe line. For me it is a chance to sing a few Helloïse songs again in some nice venues.’’

The crème de la crème of the Dutch eighties rock scene; so it is pure nostalgia for the older generation.
,,It is a Dutch project and history proves that we only had a few rock bands in that era that were successful abroad and we were not part of that, unfortunately. But we all did pretty well in the Netherlands, Belgium and Germany.’’ 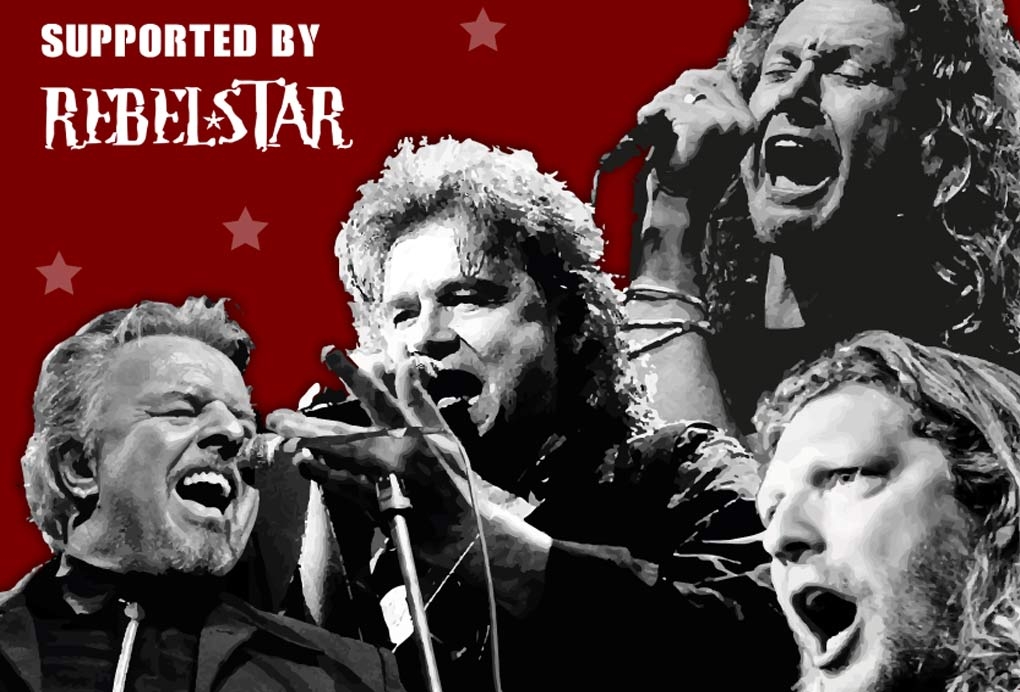 The audience will be treated to three styles of hard rock. Vengeance: party metal, Bodine: bluesy rock, Helloise and Highway Chile: melodic hard rock. That is a great combination.
,,I didn’t expect it but it is a great mix of styles. Hard work for Rebelstar though who have to perform for over 2,5 hours.’’

Are you nervous?
,,Absolutely not, everything is so well prepared and we had great rehearsals. These shows are not to revive our careers but just to enjoy and deliver some great music. The interests are not big so there is no tension.’’

Can we expect anything else special?
,,Well, we are working on a special written theme song with all of us singing parts of it, but that is still work in progress. Probably something for the second edition.’’ Recently ‘Anthology’ was released. It is a 6-CD box and contains Helloïse’s complete works, the 4 regular cd’s [‘Cosmogony’, ‘Polarity’, ‘A Time & A Place For Everything’ and ‘Fata Morgana’ plus a double bonus cd ‘Eternity’ with demo’s, remixes and some ‘new’ songs]. What was the band’s involvement in this?
,,In the decision to make it: none. Hans van Vuuren, the label owner carries the Dutch heritance close to his heart and he already stuck out his neck with the re-releases of ‘Cosmogony’ and ‘Polarity’ in 96-98 when he bought the stuff from Warner. Back then our involvement was bigger and after that we even made two new albums but for various reasons it all stopped. We as musicians are honored he released the ‘Anthology’ box but businesswise I don’t understand it because we won’t support it live. The situation with Helloïse is that it is no longer possible to go out on the road. Helloïse will always be those five guys [drummer Ernst van Ee, bassist Marchell Remeeus, guitarists Ben Blaauw and Arjan Boogerds and singer Stan Verbraak] so I can play five or six songs with a great back up band but playing with Helloïse is over. We made a last effort in 2013 in Zoetermeer which went great in the end and was later released on DVD/CD as ‘Live4Life-One More Time’, but it is realistic to say it will not happen again.’’

How ‘new’ are the four 4 new songs on the bonus CD’s exactly?
,,Haha, pretty old. They are new because they have never been released before. It was the last thing we did as a three piece (van Ee, Blaauw, Verbraak) which we recorded after ‘Fata Morgana’. Van Vuuren said he wanted another album, we started but it never happened. They were demo songs now mixed by Sascha Paeth [Avantasia, Epica, Kamelot] with only the ProTools stuff left, so that’s how old it is.’’

The show in Zoetermeer was Helloïse’s last trick live. This box is the last trick on CD, story finished, book closed?
,,I think so. We never worked on something new, we don’t talk about anything, this is the Helloïse story and it has been a good one.’’

The career has been an obstacle course. How are you looking back on it?
,,I’m thankful to our first manager Michel van de Moosdijk for writing so accurate about what happened in the booklet. In hindsight the coin rolls and can go both ways. Luck is a big factor and there you don’t have much influence as a band.’’

Looking back, what was the absolute highlight?
,,In the beginning, our participation in the ‘Grote Prijs van Nederland’ [a band competition] and the, in our eyes, great offer from WEA. Again, in hindsight, that was not in our favour. We were with a major label but on a small subsidiary with most of the budget going to big, foreign bands. The left over budget was to hobby with local bands which they’ve done with full commitment but they couldn’t offer us to other labels. WEA Germany, WEA UK, they all had their own hobby projects, so we were caught but it was great making albums with John Sonneveld. Our debut ‘Cosmogony’ was a highlight. The big shows, in Ahoy with special guests Stryper, in ‘De Kuip’, the football stadium of Feijenoord Rotterdam, where we were presented as Dutch hardrock pride. Zoetermeer was a highlight as well, a good way to finish and so well documented.’’ 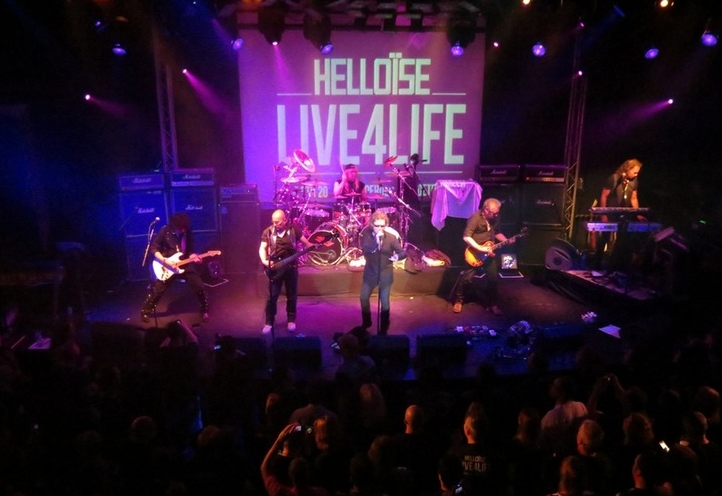 Biggest disappointment?
,,WEA’s change of A&R and the new guy who didn’t like our music, which of course can happen. They made some big investments, didn’t breakeven but cancelled all agreements. They fired Sonneveld and brought in their own producer at the end stage of ‘Polarity’. It ended with weird mixes and at that point we lost control on that side of the band. With double energy we went for the Ahoy concert but WEA already dropped us. There was no promotion although they invested more than 200.000 Dutch guilders in the album; they didn’t even try to make it a success. So, small arguments became bigger ones and were blown out of proportions and everybody went his own way.’’

Was there a plan with Helloïse?
,,The plan was pretty ambitious and the former A&R guy had figured it out. He told us: ‘The 1st album is to draw attention, the 2nd you think is your best but that fails and the 3rd one will be your break through’. We had new songs at that time, demo’s that could have made us easily fit in with mainstream bands like Bon Jovi and Europe back then. A few of those songs we later reworked for ‘A Time & A Place For Everything’ but most of the songs sounded pretty dated many years later.’’

What do you do to keep your voice in shape?
,,Singing regularly but not too often. I want to sing not only my own songs but also from other bands. I am in three bands now, two tribute bands [Stormbringer and 5150] and one coverband [Dan Stennis Band] so no complaining there. Of course you get the kudo’s but people always cheer for Deep Purple when they hear my version of ,,Child In Time’’ but that’s okay, it keeps my voice in shape. All three bands have a different motivation. I grew up with Deep Purple before I had my own career. Van Halen was a contemporary and an example. The third band is still pretty young and started last October for a conference in Germany. I was invited to sing but had no band available so I invited some people I knew. I decided to use my own nickname for it and we played eighties melodic hard rock from Van Halen to Marillion. Bombastic rock and radio darlings.’’

Don’t you feel the need to write something new yourself?
,,I’ve tried that with Highway Chile on ‘Keepers Of The Earth’. The result was okay but it was a difficult journey. I lack the fire to write and I listen to so much music that I lost my originality. The motivation is gone. Music is part of the business plan of my life. I want to perform at a reasonable level and make some money with it. You won’t see me standing on a billiard in a pub and play for a crate of beer. I want a good venue, good stage, good sound system and a solid fee. And that’s why I’m really looking forward to the United Voices Of Rock tour because we will be visiting some great venues. This is going to be so much fun for us as well as for the audience who can hear their favourite eighties rock songs from Bodine, Vengeance, Helloïse and Highway Chile.’’
—
UNITED VOICES OF ROCK Facebook Page
UNITED VOICES OF ROCK TOURDATES
HELLOÏSE Facebook Page