UP CLOSE AND PERSONAL WITH UP CLOSE AND PERSONAL WITH

This year we celebrate two decades of Danko Jones, the Canadian power rocktrio that is known for its high energy shows. In 1996 they started purely as a live act who didn’t even wanted to release albums. A few years later they changed their mind and from that moment on popularity went up. ‘Born A Lion’ was the first real album in 2002, followed by ‘We Sweat Blood’ (2003) and ‘Sleep Is The Enemy’(2005). Besides that they played one world tour after another which made them a household name everywhere and on almost every festival. In 2015 they released their seventh album ‘Fire Music’ followed by yet another tour. That brought them to Wacken again and this show will be released shortly on dvd and cd. Time to get up close and personal with the singer and guitarist of Danko Jones: Danko Jones 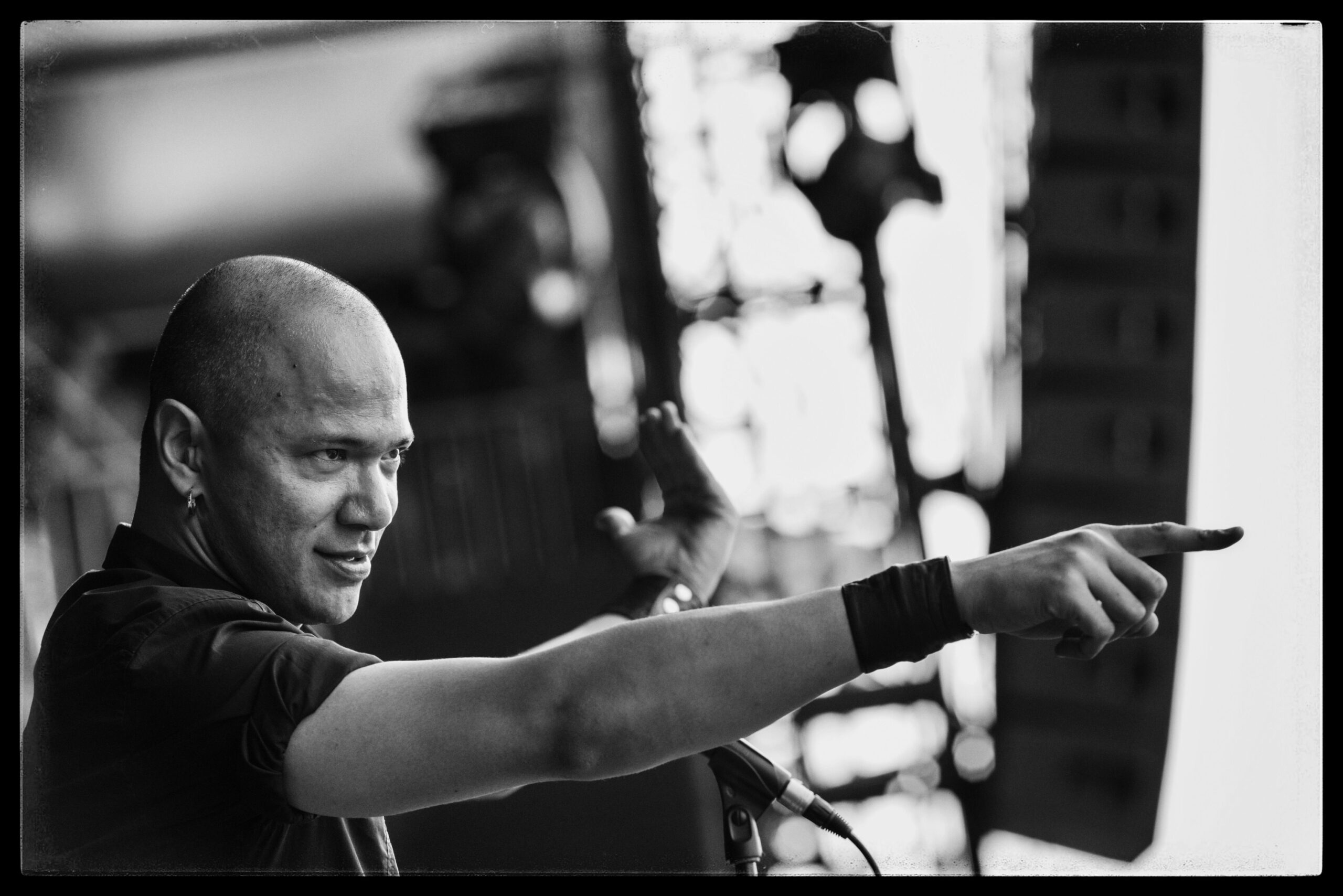 At what age did you know that you wanted to become a musician/artist and what or who sparked that thought?
,,I’m not sure. But I did want to play guitar after I heard Eddie Van Halen when I was a kid. Wanting to become a musician as vocation didn’t come later in life and it was only after I was finally truthful with myself.‘’

When you started Danko Jones in 1996 did you have a clear idea about style and direction?
,,Very clear. We wanted to be like The Gories and The Blues Explosion mixed with Black Flag, Kool Keith and James Brown.’’

What were your goals back then and how did they change over the years if they did?
,,All we wanted to do when we started this band was play shows with our favourite cool bands on the garage scene in America and record with Doug Easley. We never recorded with Easley but we did end up playing with even bigger bands, bands we would’ve never dreamed of playing with.‘’

You are a very busy person, radioshow host, columnist and done spoken word tours. How do all these different things reflect on your music?
,,I just like to do stuff. There’s a lot of downtime when you’re touring and I tend to do most of the stuff while out on the road. At home, I like to take it at a more slower pace. But I also cut out a lot of time wasters – don’t watch too much tv, don’t play too many video games etc.’’ 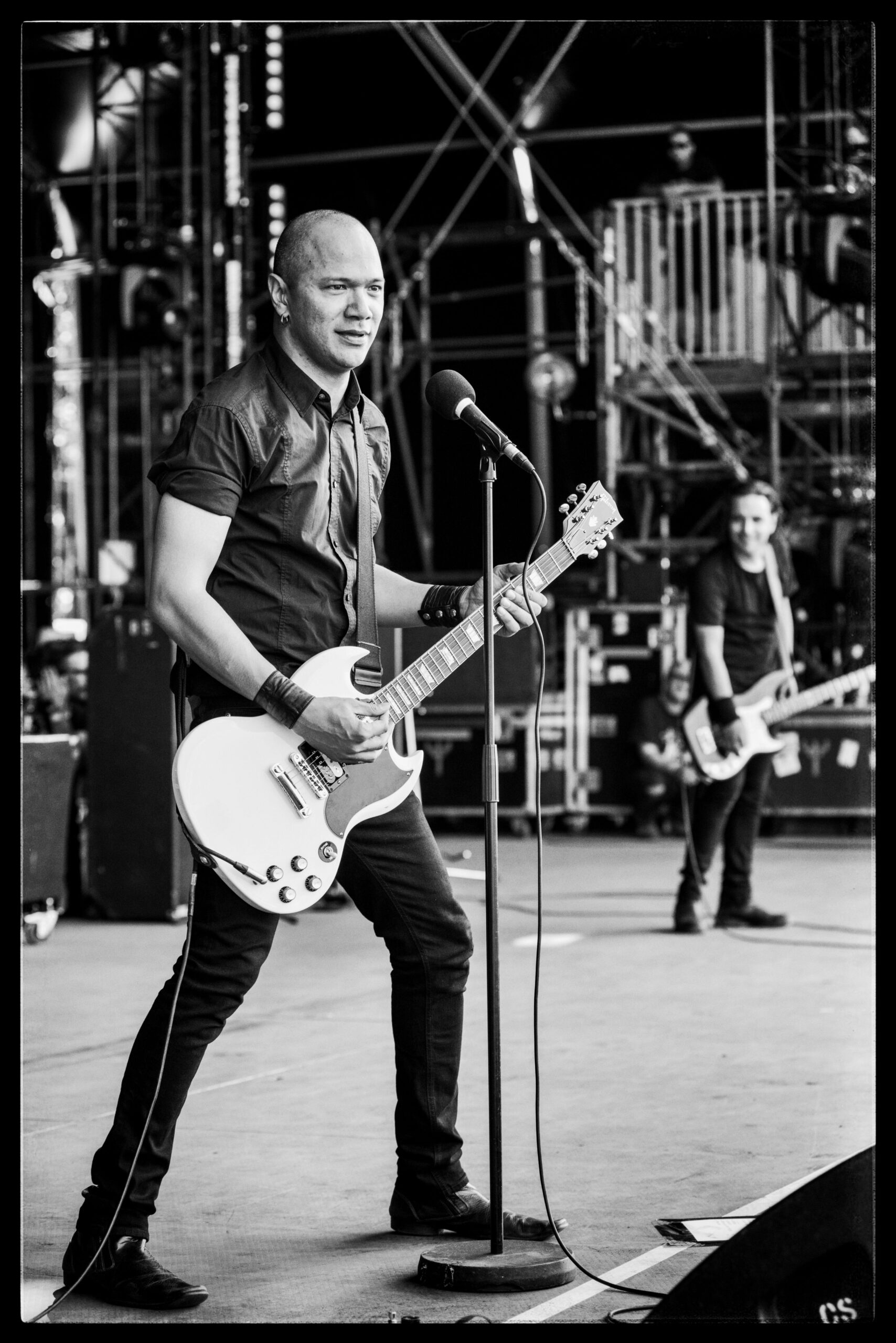 What is the biggest difference between Danko Jones on stage and Danko Jones off stage?
,,No difference. One version is on stage in front of hundreds, thousands of people. I don’t know about you but I get excited when I’m on stage. Other people piss their pants and clam up when they’re in front of a lot people on stage. I don’t. The other version of me is not on stage. ‘’

What do you consider your biggest achievement so far and why?
,,I don’t think like that.’’

In February 2015 you released ‘Fire Music’. A year has passed, are you already working on a new album and what is the status of it?
,,Yes, there are songs we are starting to work on already. We should be entering the studio sometime this year to lay them down. We’ll see. It’s a busy year for us since it’s our 20th year as a band.’’ 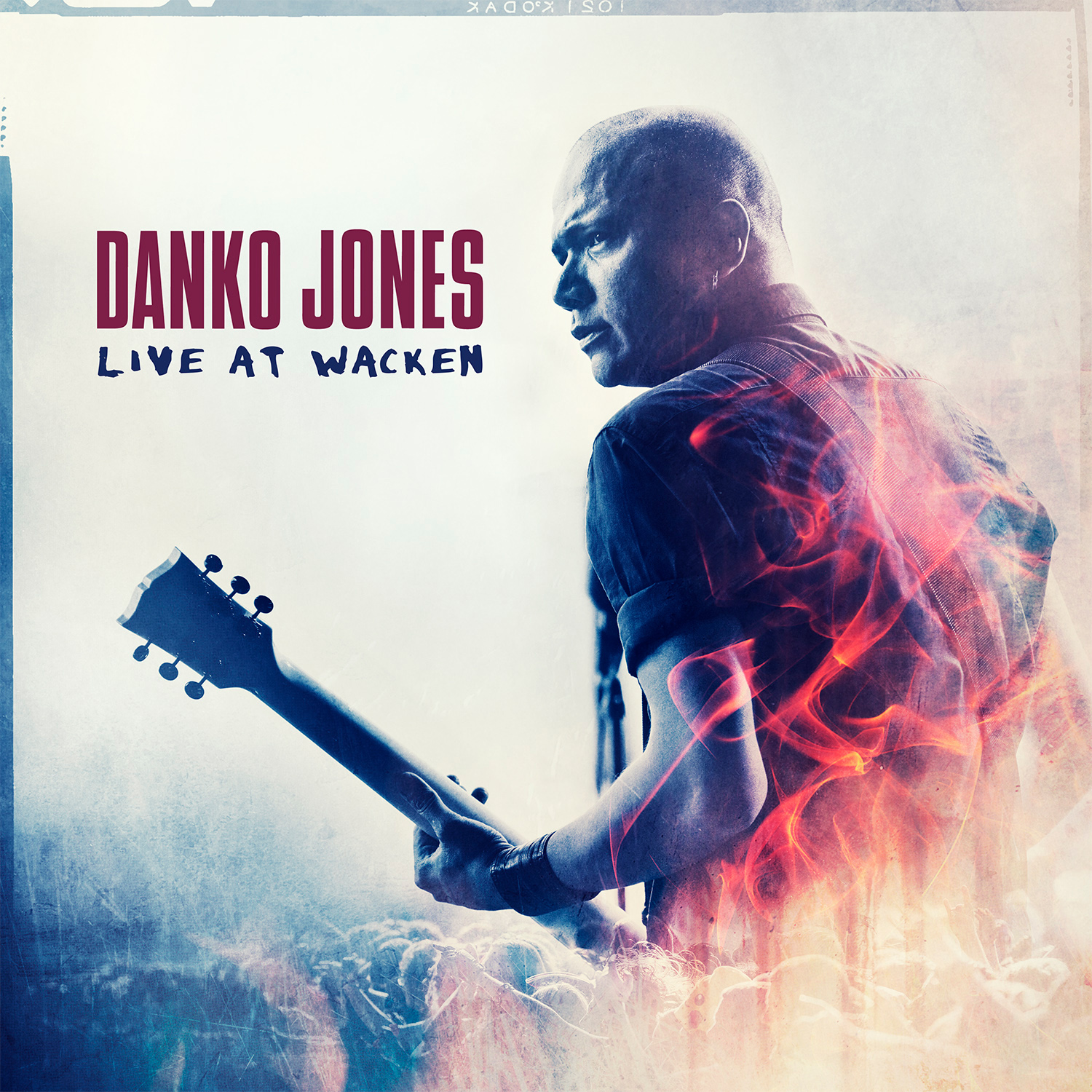 You will release the ‘Live At Wacken’ dvd containing the show, commentary and your spoken word performance. What makes Wacken such a special festival and how was it to entertain a crowd of metalheads with no music to back you up. Just you and your story?
,,Wacken has been such a great festival to play over the years and they’ve been very accommodating to our band. The shows have been very memorable as well. It’s not a spoken word performance on the DVD but rather a KISS lecture. There are no stories told.’’

In 2004 you done your first spoken word tour. What convinced you to do such a performance on a metal festival?
,,I did it in clubs and it was a mini-tour. I did the Wacken Kiss Lecture in 2012.’’

You being a huge Kiss fan finding a subject was probably not that difficult. But it must have been a hell of a job to come up with this conspiracy theory and make it fit with clips and pictures etc.?
,,It was a huge undertaking that took almost 12 months. I hatched the idea literally a week before Wacken asked me to speak so it was nice timing.’’

You made 7 studio albums so far, Rich Knox is also the 7th drummer you use. What makes it so difficult to work with drummers?
,,Well, there aren’t 7 different drummers on 7 different records. 3 of those drummers had left our band before we recorded our first studio album. We’ve been around for 20 years this year too. So, I think we’ve been pretty good with keeping drummers. Damon Richardson was in our band for 5 years, Dan Cornelius was in our band for almost 6 years and Rich Knox has been in our band for almost 3 years. Most bands don’t even last for 5 years.’’

You are also known to be a record collector. What was the album that started the collection? What is the album in your collection that you’re most proud of and why?
,,I started buying albums more frequently when a) my cassettes would always break b) everyone started buying cds and the price of vinyl was driven down. It was never an aesthetic thing like it has now become, it was solely based on money. Now that nobody buys cds anymore, I buy cds a lot. It’s always been about listening to the music not showing off a collection. I think my favourite album now has become my signed Motörhead album with Lemmy writing ‘we must tour again’ on it. ‘’ 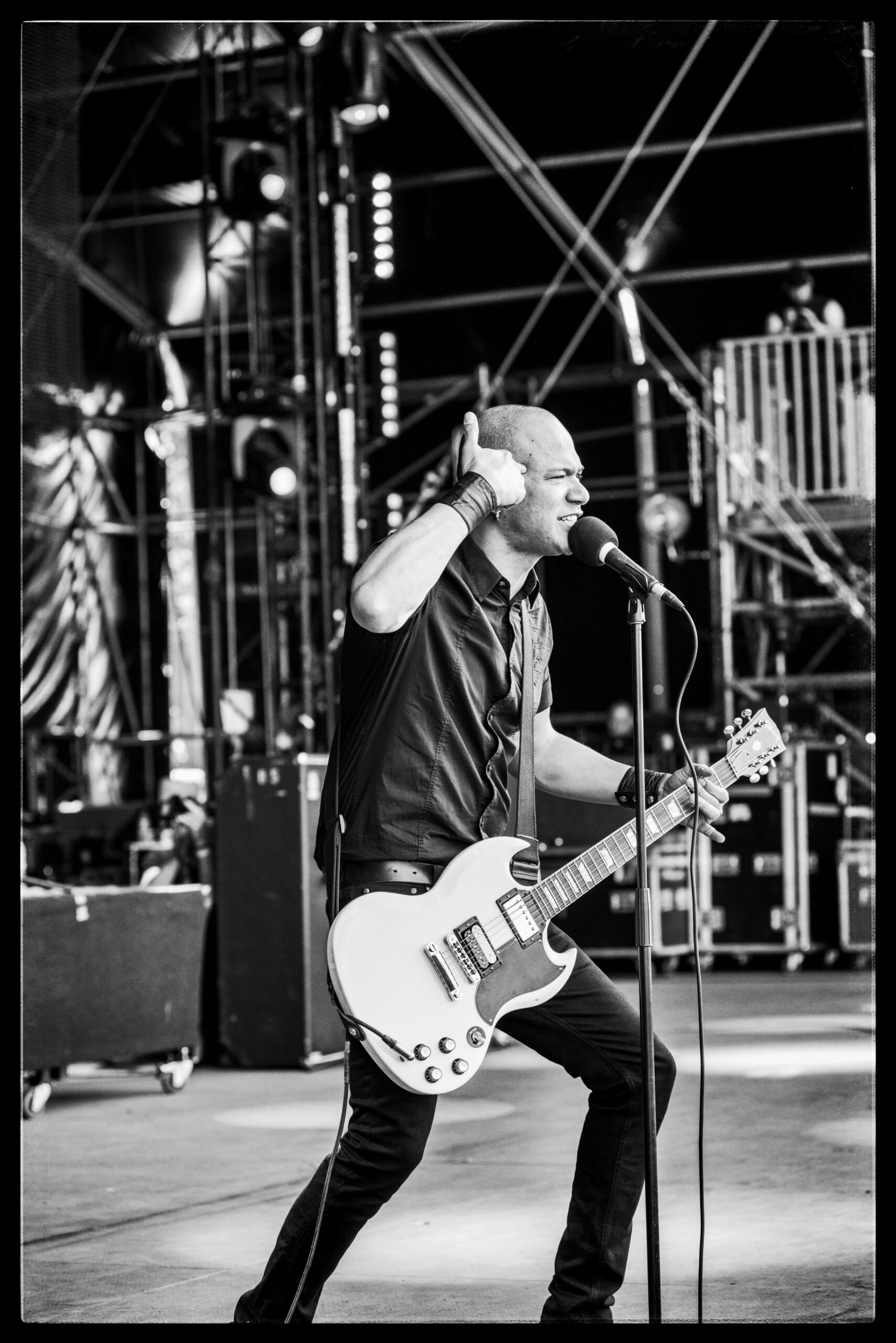 (All photos by Pep Bonet)

What is your biggest fear on stage or are you fearless?
,,Not so much a fear but I always hope I don’t fuck up the songs. ‘’

What is the last thing you do before you enter the stage?
,,Just a vocal warm-up and stretches. Not much.’’

Recently you recorded a duet with Cristina Scabbia from Lacuna Coil. The track ,,Wild Woman” for the ‘Keep A Breast’ cause. How did that happen?
,,Rude Records did all the work. Cristina laid vocals over our existing track and then they sent it to us. It was nice she sang on top of the song.’’ Recently the music world mourned the loss of two legends (Lemmy and David Bowie). Your thoughts?
,,Too many thoughts to just put in one concise paragraph. I am very saddened by Lemmy’s passing. He treated our band so kindly and was so nice to me. He almost bent over backwards and said yes to almost anything we asked. Also, his band was one of the greatest Rock and Roll bands that ever existed in the history of music. I never met David Bowie but who doesn’t love “Low”, “Ziggy Stardust”, “Let’s Dance”, “Heathen”, “Young Americans” and “Hunky Dory”?’’
—